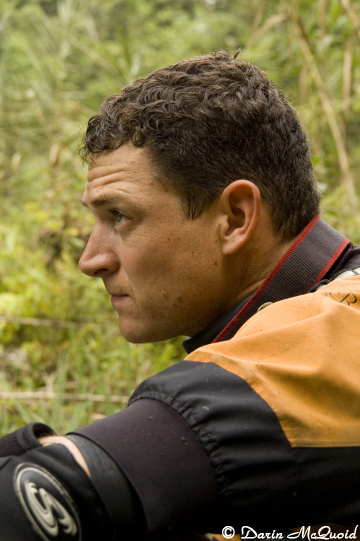 We all knew this was it. One full day left to complete this run that we had spent the last three weeks working on. Early in the morning we all rejoiced that the weather was the best it had been in days, with spotty clouds and a good amount of ambient light. Emotions stirred at the start of such a big day, excitement and apprehension about the first waterfall, curiosity and trepidation about the unknown river downstream, and most of all hope that we could complete the bold mission we had put so much into.


We made quick time down to the water, and most of the group was in business mode for the morning and got setup quickly. I felt really good about the waterfall, confident I could make my move and willing to take the horrendous swim if I didn’t. To my surprise EJ was also fired up about this waterfall, something I didn’t expect from a someone that to my shame I had mentally categorized as just a play boater without knowing him. EJ’s line was different then Ben’s line, he planned to seal launch in backwards, into the slack water/eddy right above the falls, and then proceed to start a ferry across turning his angle downstream as he did so. Without delay Eric headed to his boat while the rest of us got our assorted cameras ready.


Eric Jackson, looking focused and about to seal launch in. 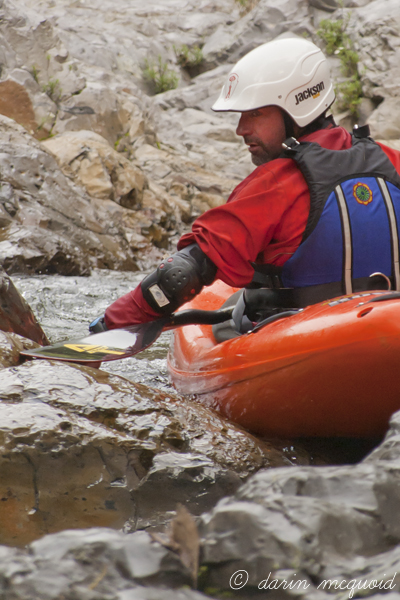 From the eddy EJ made an easy looking ferry and took one long left side stroke all the way into a tuck at the bottom, disappearing for a moment and resurfacing on the right of the boil, rolled up and was as fired up as I have ever seen anyone. 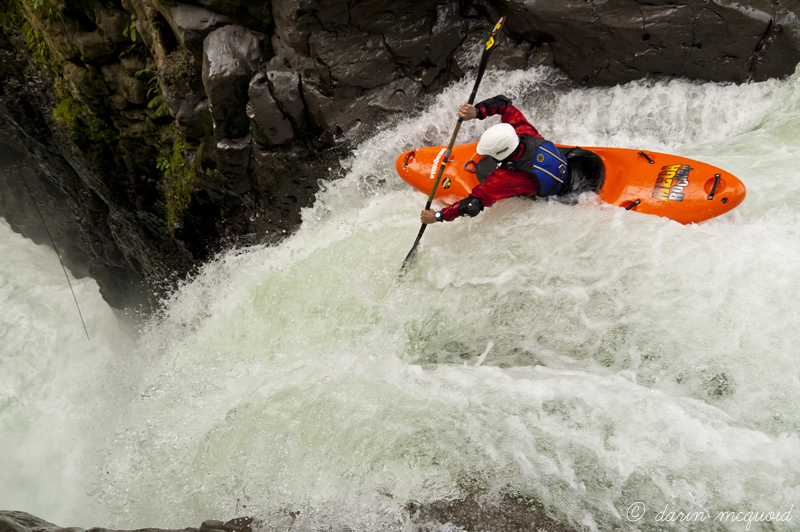 Now I was even more excited about this drop and headed up to my boat. I still wasn’t sold on the reverse seal launch, and tried several spots for my boat but couldn’t find anything that suited my taste. While debating my options EJ walked back up and sold me on the reverse seal launch. I quickly thought of my line while Heather was kind enough to hold my boat and I prepared mentally. I knew I wanted to move across in a upstream ferry, let it turn my bow downstream when I was far enough right, then take a left stroke once I was going over the falls, and boof with some right angle. Normally I wouldn’t consider boofing something of this size, but the pillow was huge and looked like it could cushion the impact from the 35’-40’ fall.

My boat quickly stabilized under me after the reverse seal launch, and I wasted no time before starting my ferry across, as I dropped over the edge I got the long boof stroke in, boofed and leaned forward, ready for impact. The impact at the bottom was soft, and I’m not sure if I subbed out and resurfaced upside down or immediately flipped in all the funky water, but on rolling up I was relieved to see I was far away from the left undercut and not stuck on the right wall. During the boof I forgot to turn my head sideways, connecting my face with my cockpit rim. My nose was sore but not bleeding, and thank heavens, not broken.


Nick stepped up and ran it too, with the fourth clean line. 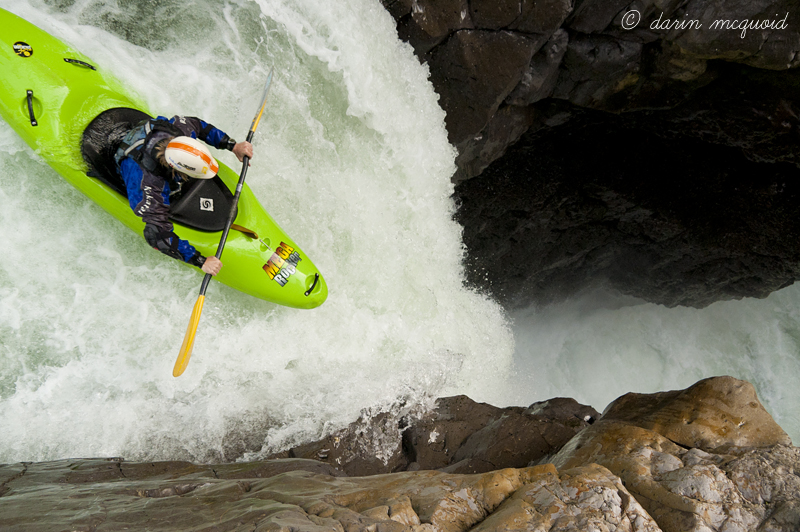 After his run we regrouped at the top of the falls and with plenty of daylight left chose to finish the unknown run below. In true form, after one corner the Rio Alseseca went through a nice set of bedrock drops that looked a bit sticky. After a quick scout EJ opted to probe the drops, the first one being an interesting folding affair.

EJ lined up the drop and nosed into the fold, and surprising everyone he disappeared completely for a brief moment. 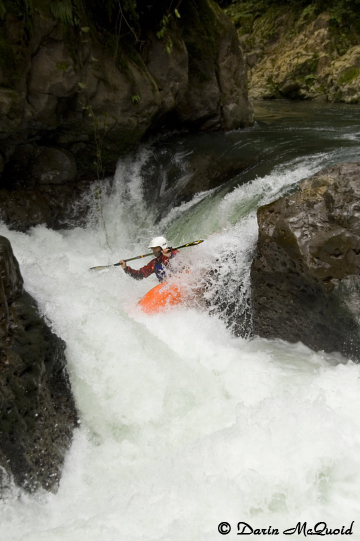 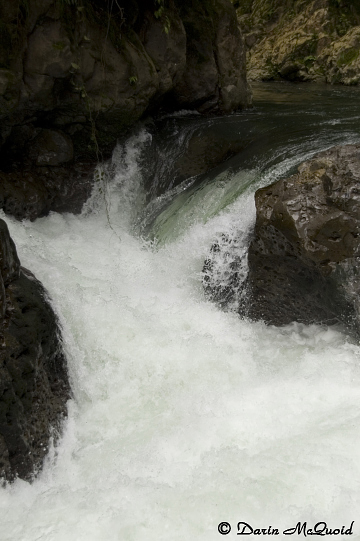 There’s a paddle blade! EJ on his way to the surface. 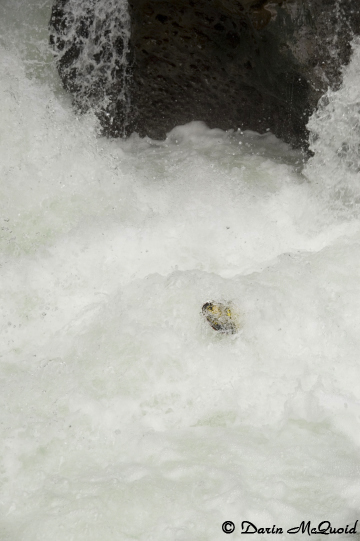 The hole proved to be a little sticky but he worked his way out. 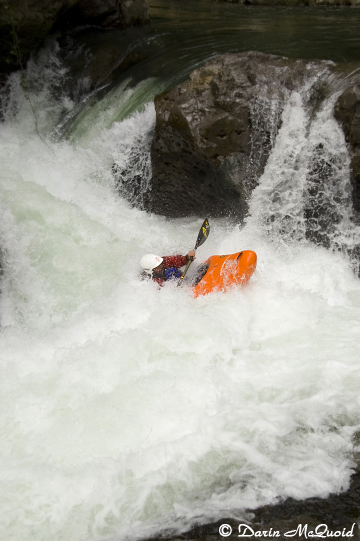 It was really one long rapid with eddies between drops, classic pool drop style. Two ledges followed the folding affair.

Eric Jackson on the second of three parts of the rapid 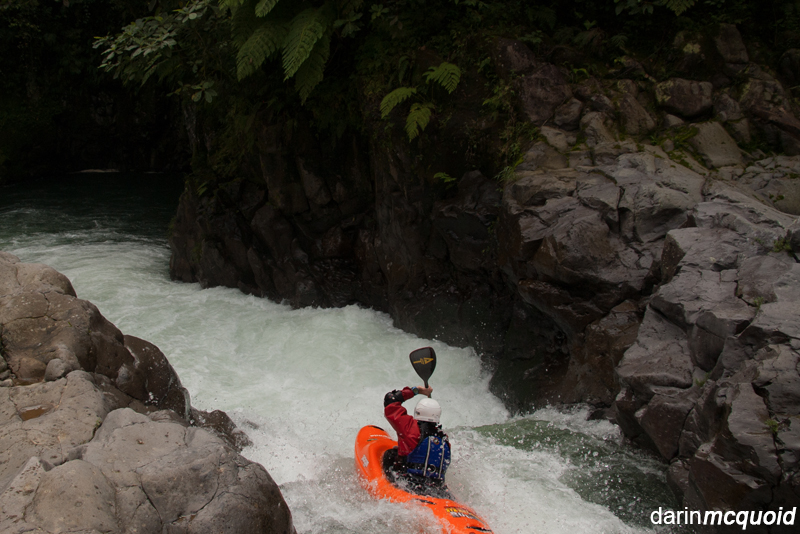 The third ledge was super sticky on the right side and circulated back into the hole from fifteen feet downstream, so needless to say we went left. 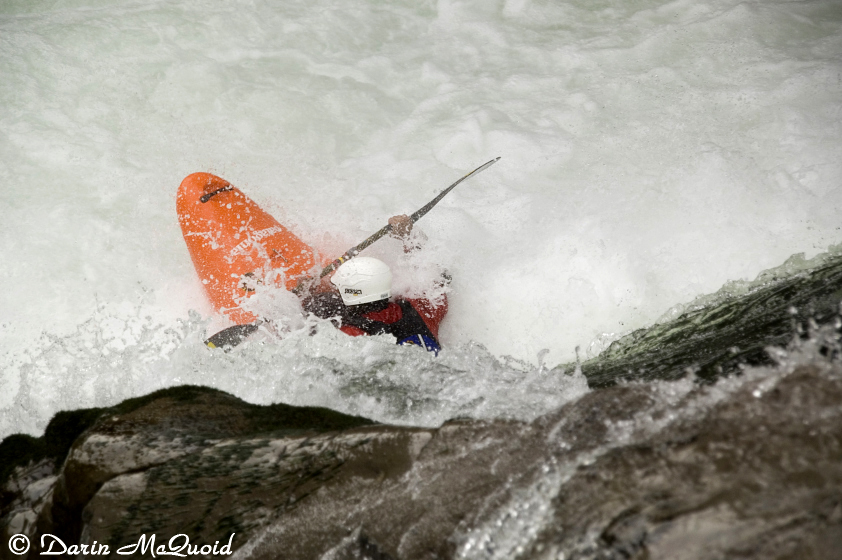 I portaged the folding affair while Rafa ran it without problems, and Rafa, Nick and I grouped in the big eddy above part three while other team members came down. Next the river split around a large island requiring a quick scout for an easy rapid that emptied into a pool above a larger horizon line. A quick scout of the larger horizon line revealed a quite substantial horizon line at the bottom of a class IV lead-in. We all got out for a look at an intriguing waterfall. Once again the river split around a large knob of bedrock sticking up in the middle. The right channel…could go but was not friendly with big sticky ledge holes. The left side was a sweet 10-15’ slide that dropped onto a pillow/seam from the right channel, and then straight over a 10’ drop, unusual and very fun looking. We spent plenty of time looking at it, and while doing so Rafa and Ben checked out what was downstream, found a sticky hole with a major cave that looked like you would never come back out of. By the time they walked back up the waterfall was known as “Meatlocker” in reference to the cave feature downstream.

Rafa also yelled to us with elation that the Pesma Run was just around the corner too. That made this drop the last of the first descent on the Middle Alseseca and that much sweeter than it already was. With huge smiles on our faces we got ready to run the rapid or capture it on film respectively.


Rafa Ortiz, first descent of the Meatlocker on the Middle Alseseca. 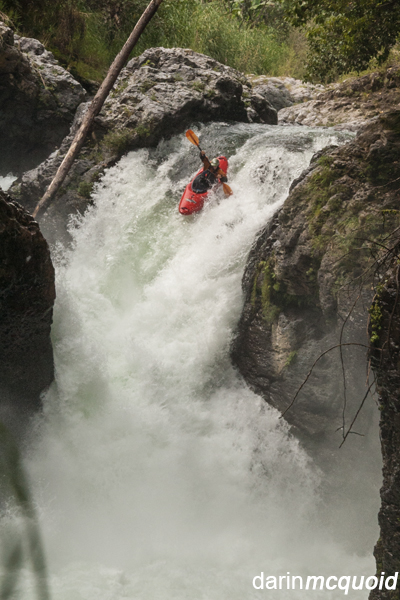 Rafa disappeared at the seam and resurfaced below the drop with a deft roll and big grin. EJ got a nice boof off the slide and completed the drop in a screaming fast tail stand. 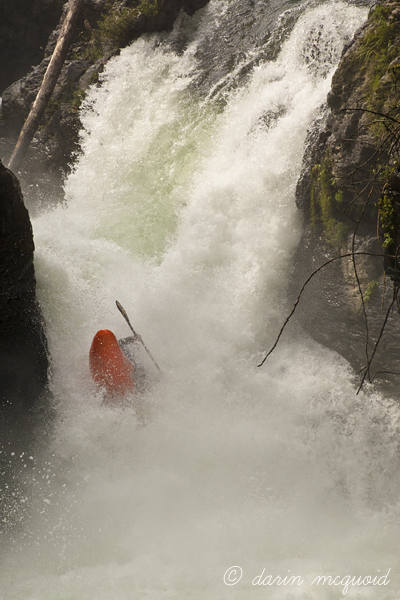 Fun lines were had by all, this drop just stoking us that much more on a mission accomplished.

Nick Troutman relishing the last of the first descent action. 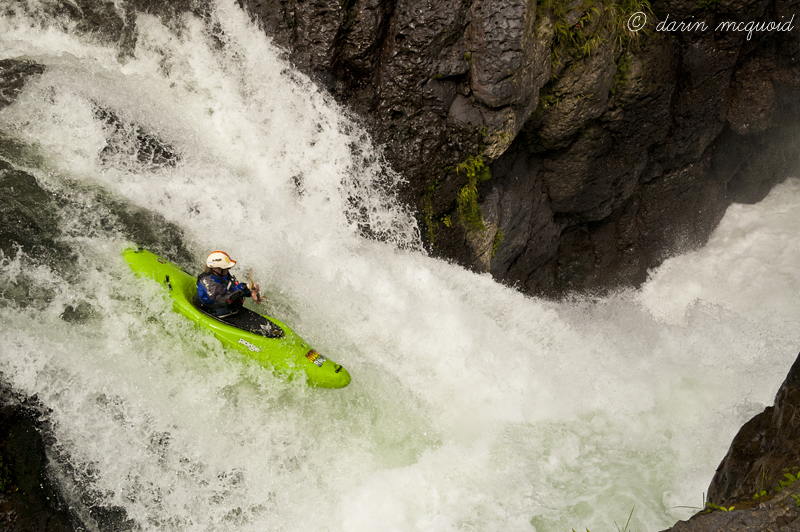 Post quick portage and brutal seal launch (for some) around the cave feature we were on the Pesma run that most of the group had run earlier on a high water day. Thayer joined in on the run and we enjoyed the low stress drops all the way down to the Tomata Bridge. 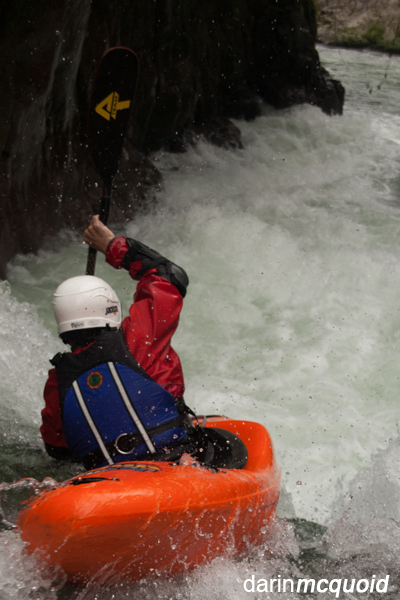 Our ever-faithful Israel was waiting at the Tomata Bridge, and we pulled off the river with a feeling of accomplishment, elation, and respect for the river words can never do justice to. The cameras were set down while we enjoyed one last night in Tlapacoyan, packed up for Mexico City and our various flights home. Years later it's great to look back and see how classic some of these sections have become.