Bluey Brook
IV-V
Rain. Our love/hate relationship with rain was started with mixed emotions as it dumped down rain on our campsite in Newfoundland. During the night we got so much rain that it flooded Chris’s sleeping spot and made him move to high ground. Looking over our beta list we quickly chose the “South Fork Lomond.” The beta consisted of shuttle directions and; “A topo scouted run that looks like it will provide the goods.”


Despite a serious lack of ground clearance, we made quick progress towards our take out bridge. 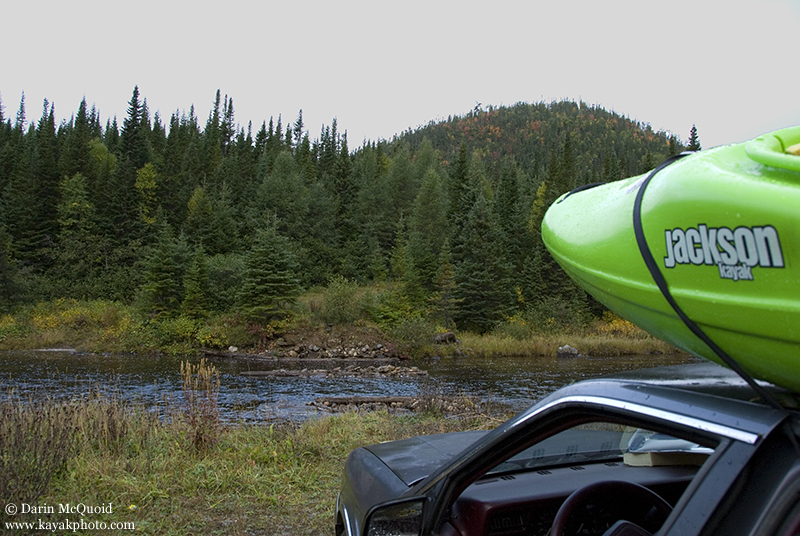 Obviously our beta was a bit outdated, so we agreed to hike in for 5.6k.

Thirty meters up the road (we’re in Canada, so metric eh?) we ran into two gentlemen out Moose hunting. Good thing we have lots of bright boating gear. We chatted with them for several minutes trying to figure out where we were going, and in the process found out that Bluey Brook is what locals call this tributary of the Lomond.

Most of the elevation was gained in the first half hour of hiking, and after meeting several more hunting groups we arrived at put-in. Flows looked tolerable and we scrambled into our gear before getting too cold.


Chris Korbulic gets his paddle in the water for the first time in Newfoundland. 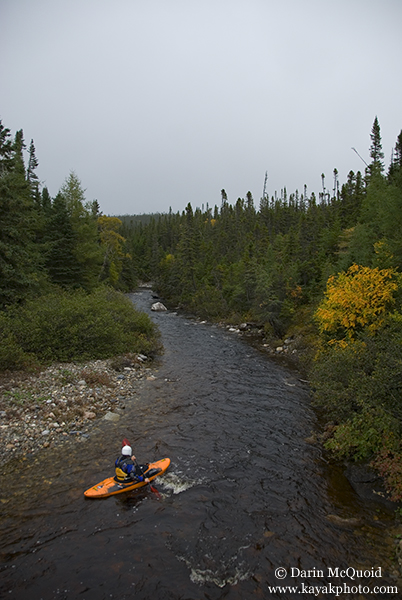 I hadn’t even glanced at a map for this run, and with the gradient maxing at 224fpm I had written the run off as a great warm up for us. Spectacular scenery quickly gave way to a bedrock mini gorge. Scouting on both sides, we found an access point after two rapids, and decided to drop in for it.


Chris leads the way into the gorge. 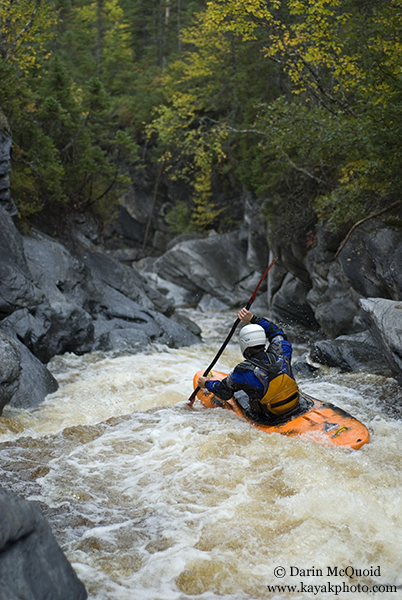 The second rapid was contained an unusual entry into a fifteen foot waterfall. Most of the main flow was landing on a rock outcropping jutting out from the left bank, and a narrow line existed between a rooster tail and the outcropping. Chris opted to run the whole thing from the top, and I portaged down to an eddy at the lip of the falls.


Chris on the narrow entry line. 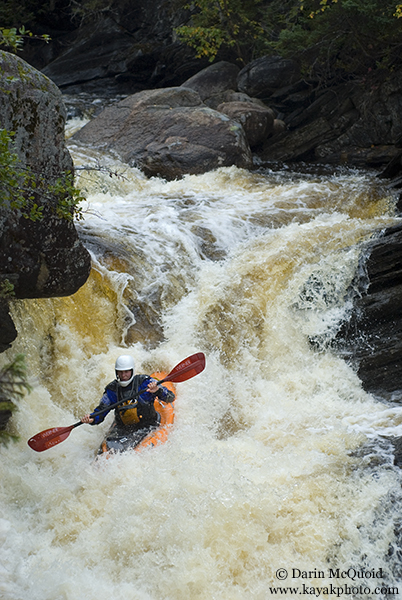 The entry pushed into a folding section of the waterfall that I personally didn’t want to deal with, but Chris went right down the fold and resurfaced upright below the falls. 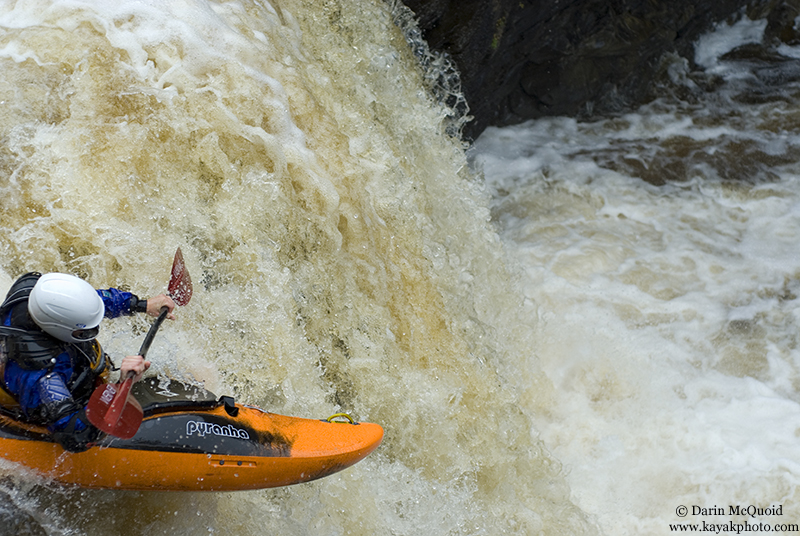 I seal launched in and ferried across…to my surprise all the way to the left side of the falls and got a bit of a boof. Smiles shared all round and we headed around the corner, eddy hopping and eventually scouting when the canyon got deeper than we expected. 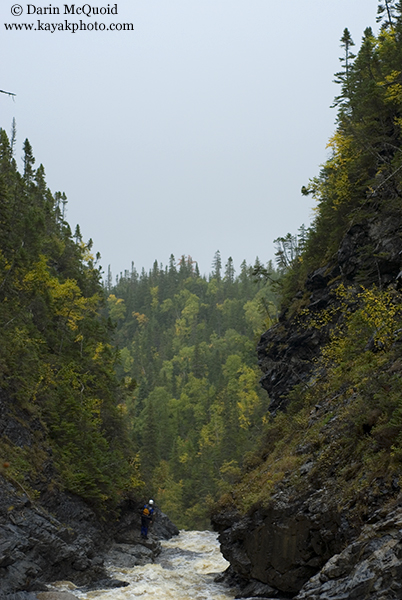 And there we were, on our “warm up” run’ possibly locked deep into a canyon with an end of the world horizon line just downstream.

Chris pulled some billy-goat action on the left side, and came back reporting a perfect lip into a 40-50 foot waterfall. The downside was that underbrush obscured the base from all angles. With only a few hours of daylight left, we were forced to make the call, hiking around and scouting the base eliminated off the list due to time constraints. Looking at the steep canyon walls we were tempted to just fire it off and get past the waterfall, but both knew we had our work cut out for us making the right choice and portaging around, hoping to be able to check the base via downstream access.

With steep walls on both sides we starting hiking up the only section that wasn’t cliffed out. Struggling up the slope we found our affair with Newfoundland underbrush to be a lot like our love/hate affair with the rain. Impossibly thick at times, it held the slopes from sliding as is the only reason we were able to egress from the canyon.

Deep into the portage and several hundred feet above the river, a tree broke sending Chris’s boat tumbling down the canyon walls, where it stopped in an eddy on the other side of the river. This should give some indication of how steep the walls in here are. Chris made quick work back down to the river, and a nice recovery. Here is Chris reunited with his boat, in the first “clearing” that allowed us to rope the boats up. 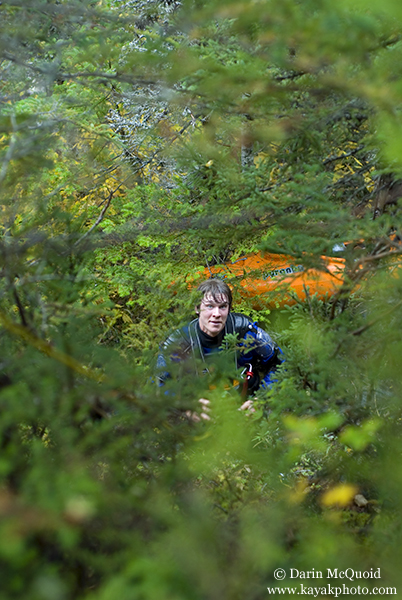 Once near the ridge the undergrowth was so thick we had to shove our boats through or onto it, and proceed to crawl over or climb through where they had just gone. Visibility was limited to two feet, but thankfully on the ridge it cleared up and open spaces of over ten feet occasionally existed. The rest of the portage was mundane thick bushwhacking back down to the river below the falls. Excitement grew as we hiked back upstream to see the waterfall plunging into a large pool, looking clean and good to go.

Knowing we had still made the smart decision to portage this time, we raced daylight out of the canyon and to our car, looking forward to our return trip on Bluey Brook. 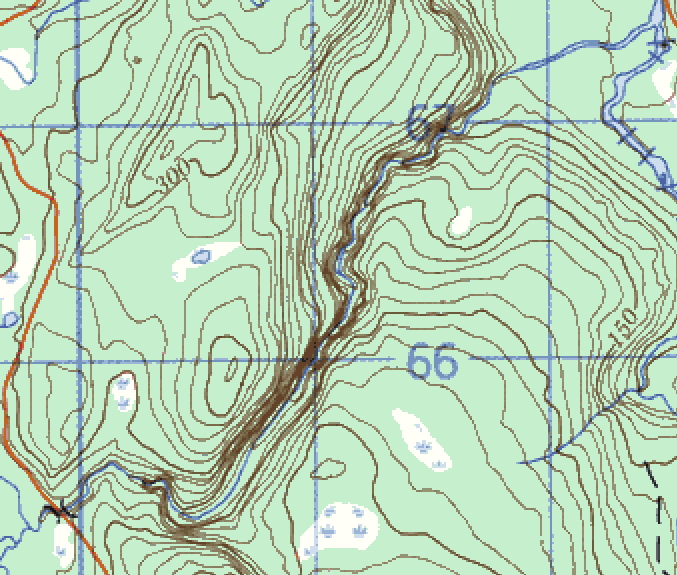