Clover Creek is a tributary of Marble Creek, which is itself a tributary of the Middle Fork Kaweah. Clover lies high up in Sequoia National Forest and this high elevation creek has been gaining some recent attention as a half day hike and slide adventure. We drove high up into the park, past General Sherman eventually finding the trail to Clover at the end of Wuksachi Way.


Where is the put-in at again? This one isn’t it. 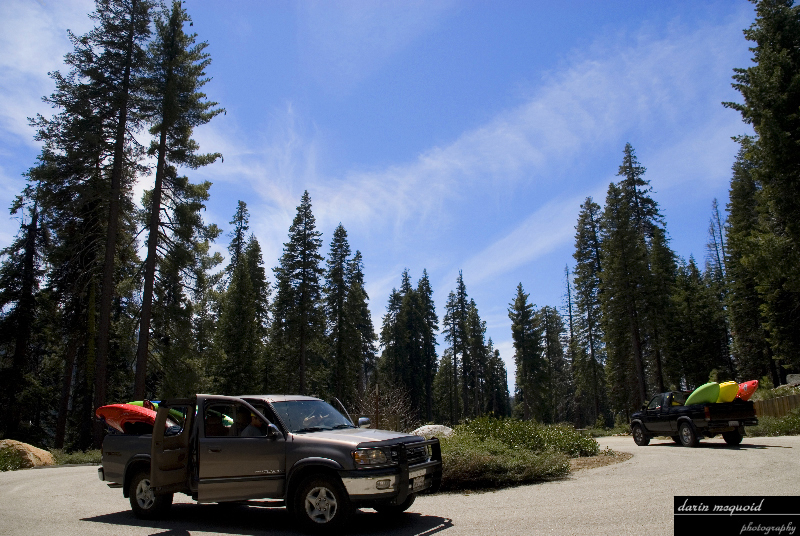 Once we found the trail it was a quick ten minutes of well maintained trail to Clover Creek. We came in right at the bottom of a long, low angle slide and started working our way up the granite slabs. 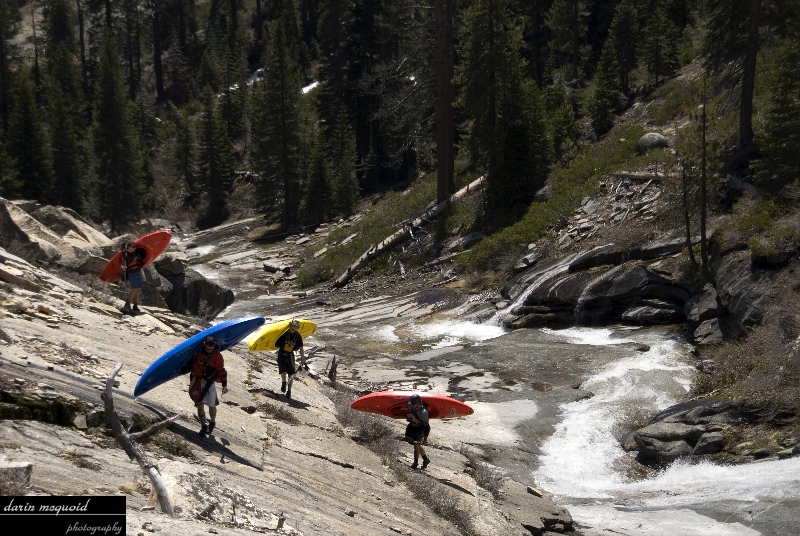 The water was low enough that when necessary we would cross in shallow spots to continue climbing up the creek on the other side.

Devin Knight checking out some of the nice gradient and clean bedrock on Clover Creek. 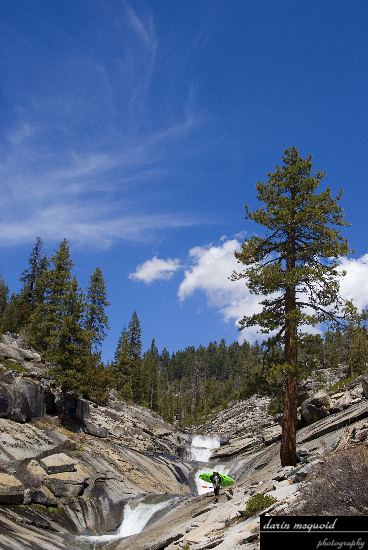 The group took a long break at the top of the second section of slides, while I hiked on with a slow but steady pace, eventually taking a rest below where a tree was across the river. While resting the group scouted out the slides a bit more, and thought a few were marginal with the minimal amount of water we had. Since my boat was already pretty high up I ran the top set of drops down to Garret Brown who was setting safety above the most significant set of drops.


Shon and Jason were also motivated and hiked up for the top set of drops and blue angled down the fun slides. 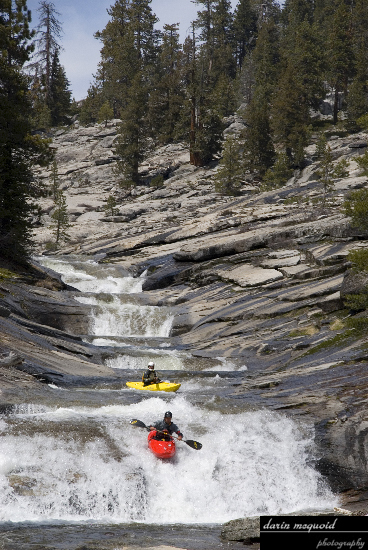 Garret makes sure that Shon catches the eddy above the larger slides. 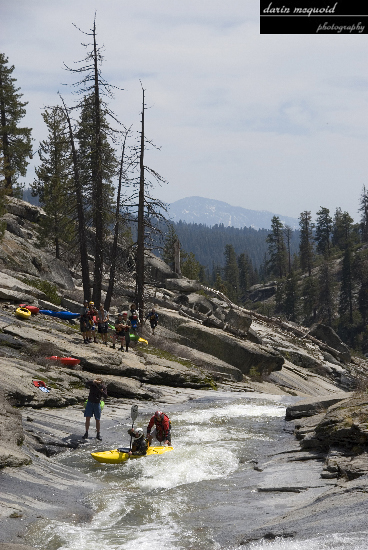 We all ended up portaging one drop due to low flows in the section just below the aforementioned eddy, but Devin probed some of the shallow looking ones and motivated me to fire them up, while the rest of the group put in below the shallower looking falls.


Here is Devin styling his way through two drops that were part of a four falls series that ended in a low angle slide disappearing around the corner. 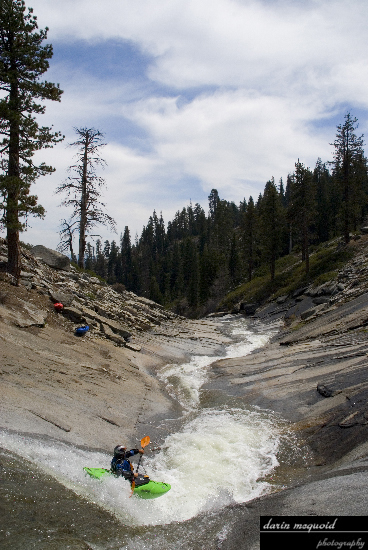 I think Devin had checked out the slide around the corner about as well as I had: not at all. We watched him try to catch a few nonexistent eddies on the way down and then charge off around the corner.

Devin on the low angle slide leading into the corner drop. 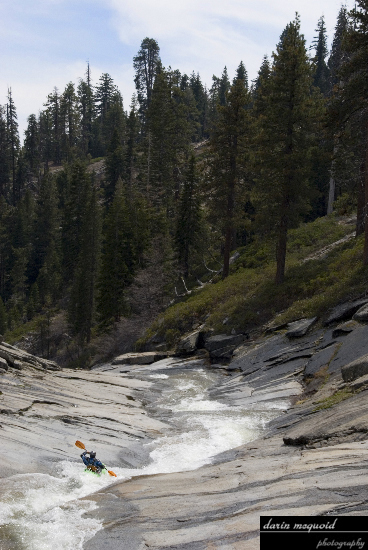 Devin eddied out a little ways downstream, hiked back up and told everyone to drive right on the corner and expect a big hit. Somehow I managed to miss this between dealing with my camera and getting in my boat, so I took off enjoying the stacked up falls, and upon hitting the low angle slide saw everyone pointing right as I came up to the corner drop. As I drove right I got rejected by the shallow slide, slid back to the left and turned my boat to the right once I saw the incoming wall at the bottom left of the slide. I took a small hit at the bottom but somehow managed to connect with water before the rock. Two more low angle slides lay directly below, so I ran those and eddied out, grabbing my camera and heading back upstream to get the others as they came around the corner. We sent everyone from our group off the slide and we all took hits, some worse than others. A group putting on behind us gave this rapid the fitting name of Sixty to Zero.

Eric Petlock running the drop below Sixty to Zero, still feeling the pain from the slide upstream in the photograph. 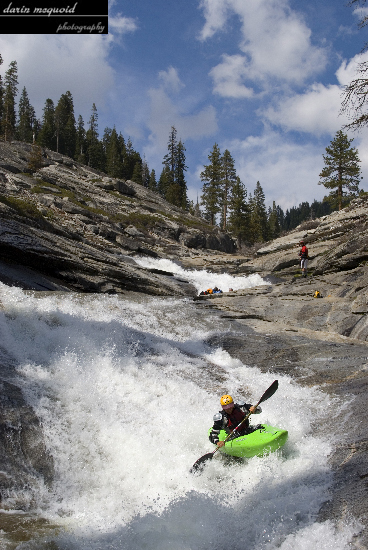 One more long slide lay between us and where we hiked in. Devin gave it a quick look and told Shon and I it wasn’t worth looking at, so we hopped in our boats and took off in a tight blue angel formation for the final slide. We all had clean lines although we got stacked up on the one hole in the slide, but we took no hits. Several members of our group took a small hit somewhere in this slide too, another one that more water would help.


Taylor gets down with some paddle twirls in the run-out of the final slide. 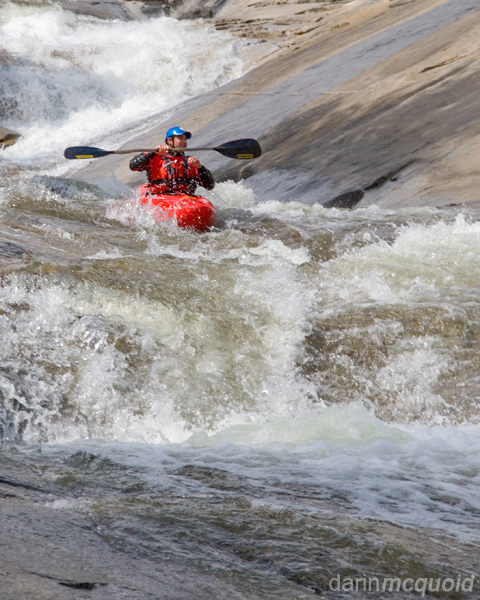 Eric gaining some nice speed at the bottom of the slide, it starts about fifty yards upstream and is a nice long one. 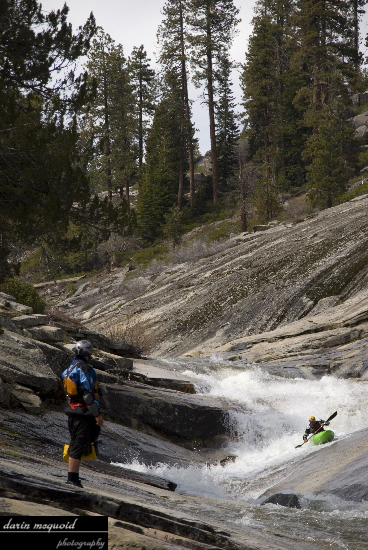 Taylor, Jason and Garrett laughing about the hit before hiking back out to the vehicles. 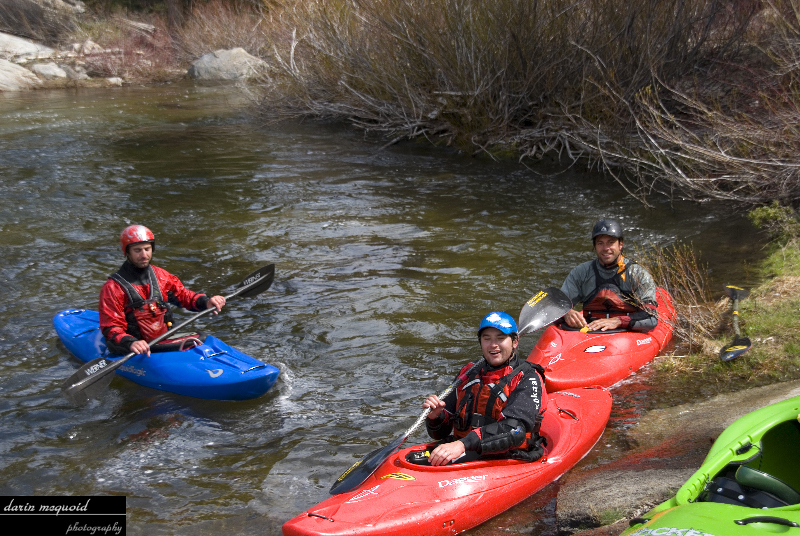 The Kaweah at Three Rivers peaked at 1200cfs the night before our Clover Creek run. We would all have liked to see more water, and this section really is steeper than it looks and quite fun.