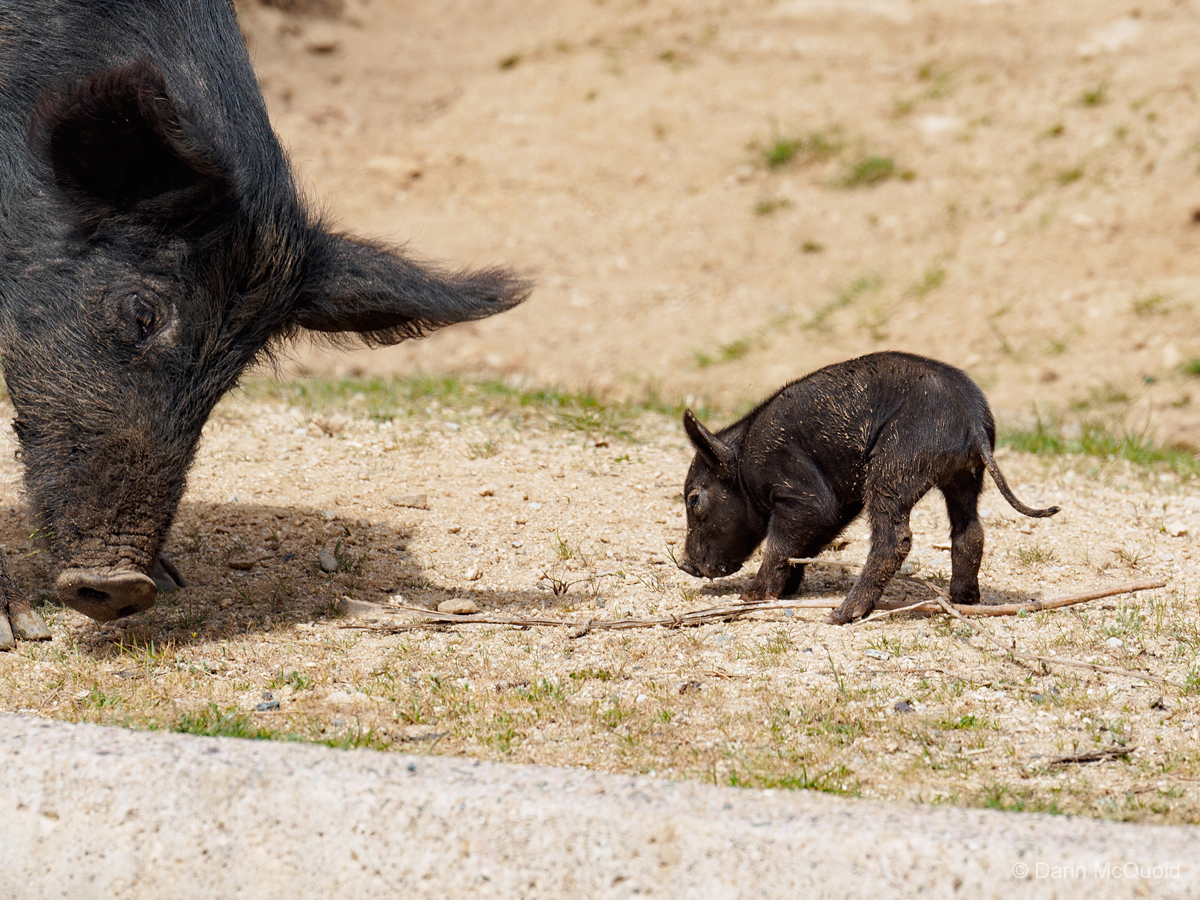 After a night of heavy rain it's a day with options. Many rivers are flowing. We've been hoping to a chance to run Corsica's most notorious run; the Upper Vecchio. This section of river is one of the most remote on the island, and one of the toughest as well. There are tales of unplanned nights on the river, long hikes out and too many siphons. It looks like it should be in, but unfortunately it's on the west side of the island and we're on the east. So we drive back across and take a tourist day to enjoy some sights and culture.


A late lunch back in Corte.. 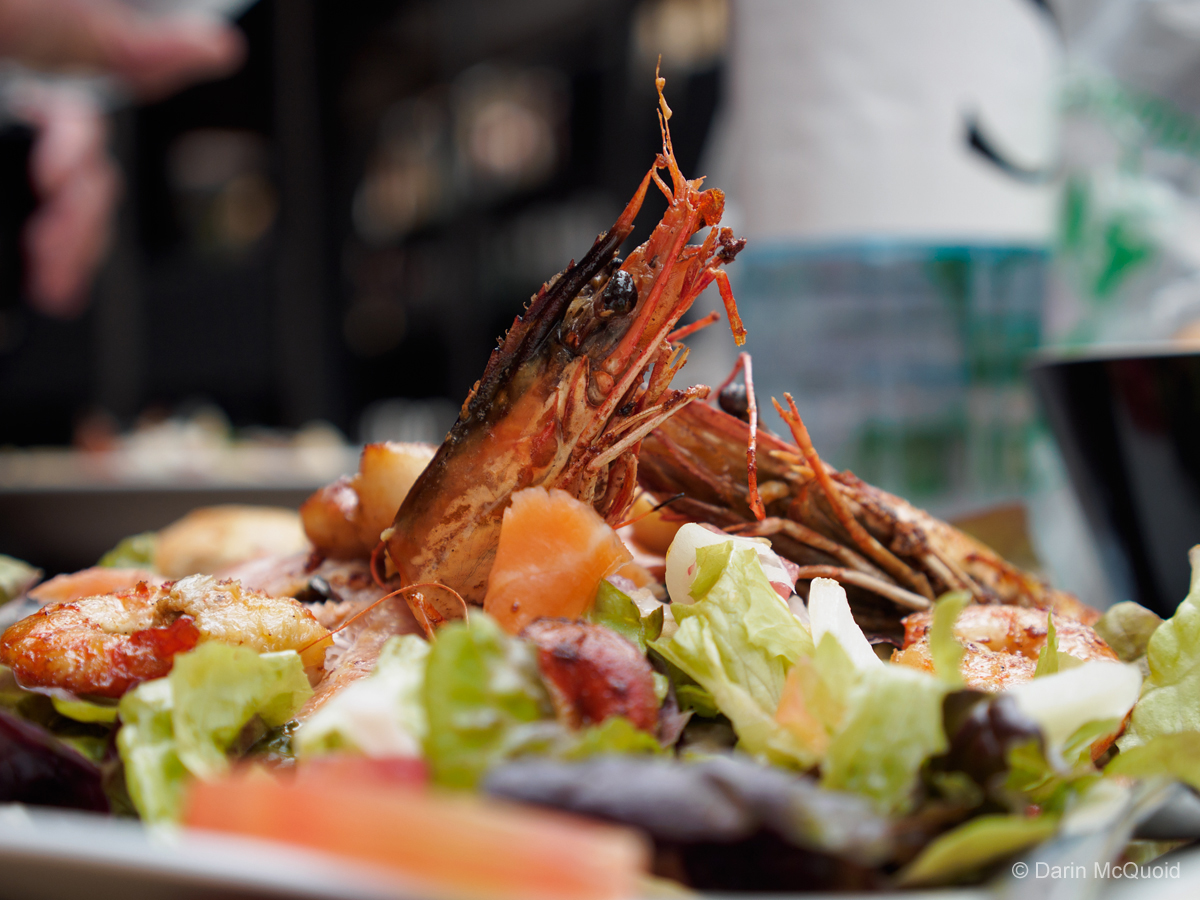 Church bells in the old capital of Corsica. 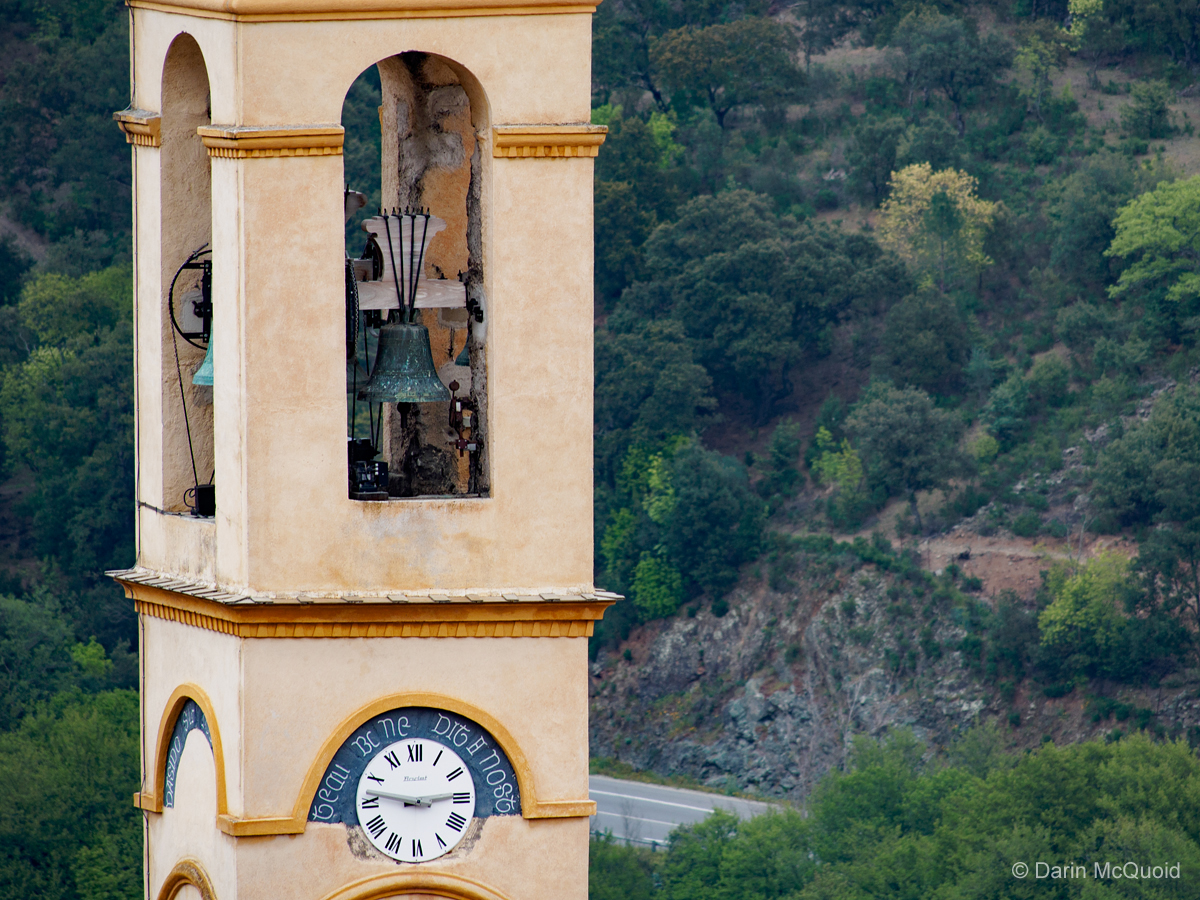 Driving through to see the valley at the head of the Restonica River. 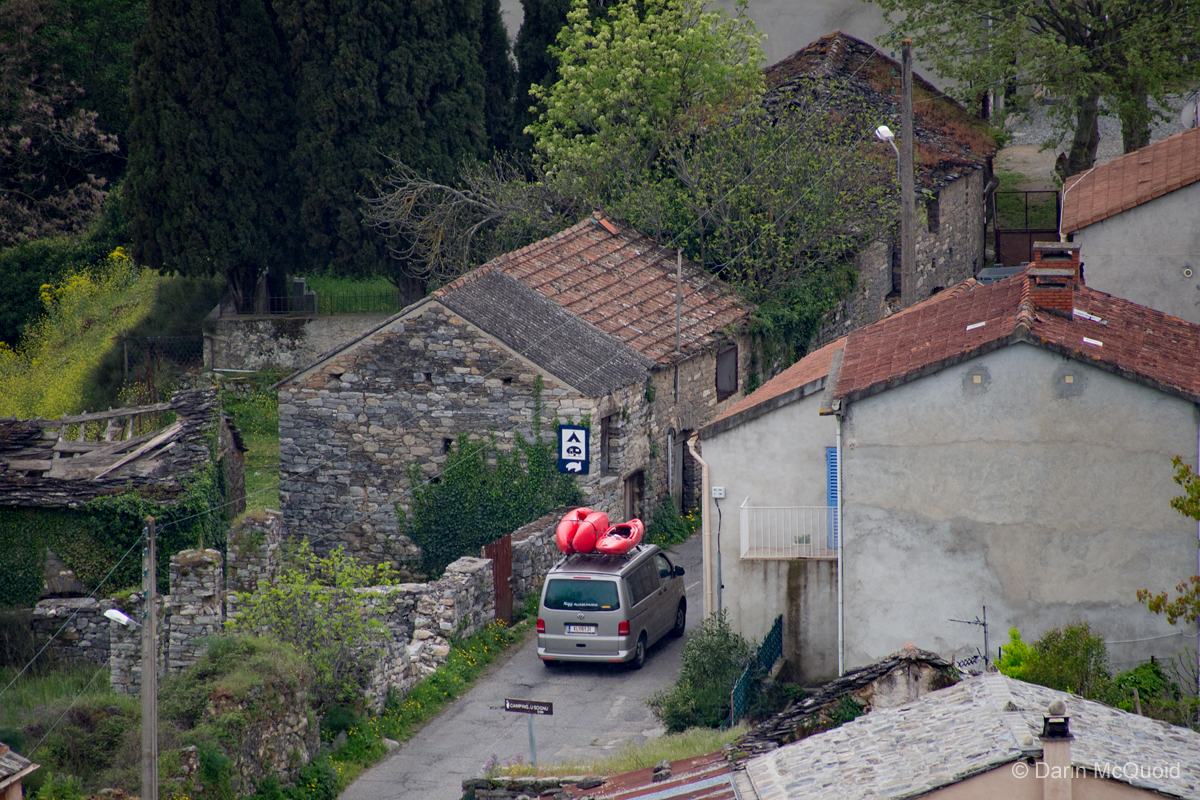 The Upper Vecchio is an eight kilometer section that typically takes eight hours. Knowing we'll have high water, we decide to get a relatively early start, which for our group, is before noon.

Ruins tower above the Vecchio river canyon, these things are half the reason for kayaking in Corsica. 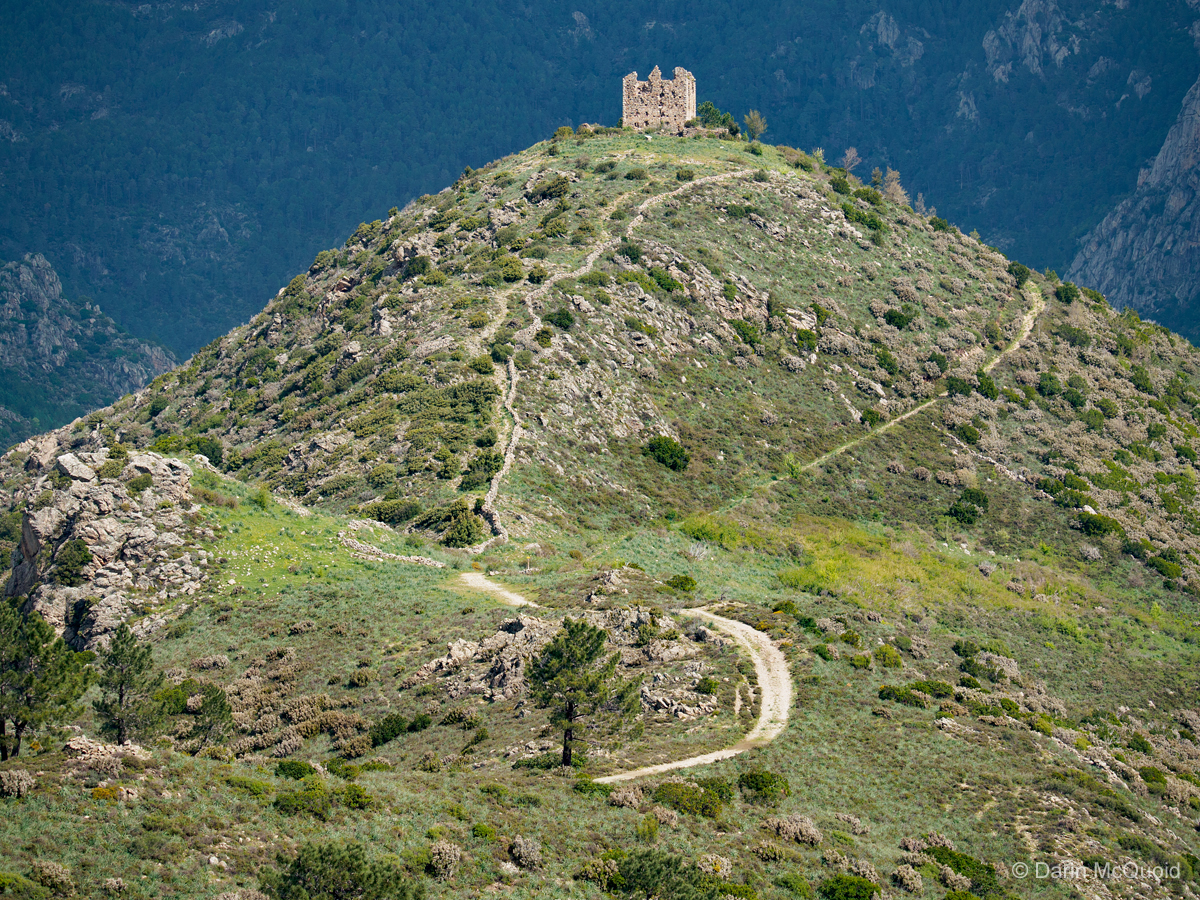 We'll also have another member in our team today, Harald Glanz from Austria has done the section before and joins in. The river is beautiful at put in, it's fast moving boulder gardens down the first rapid of significance. 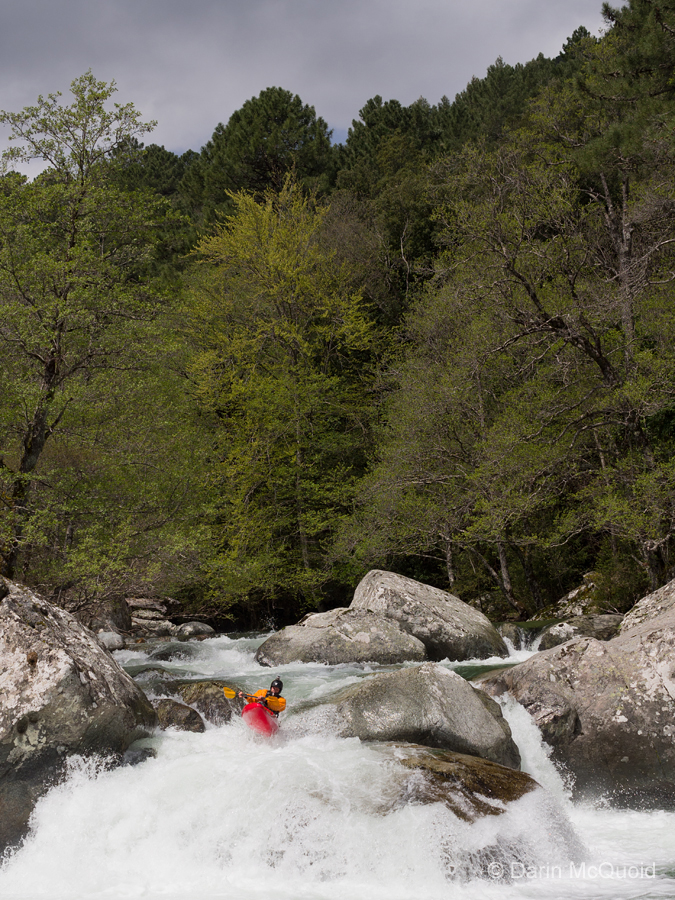 The first rapid is nice and fun. Soon after we have another horizon and some of the team scout. As I'm sent through it's a surprise; the Upper Vecchio seems to be quite high and considerably harder than anything else we've paddled on this trip. 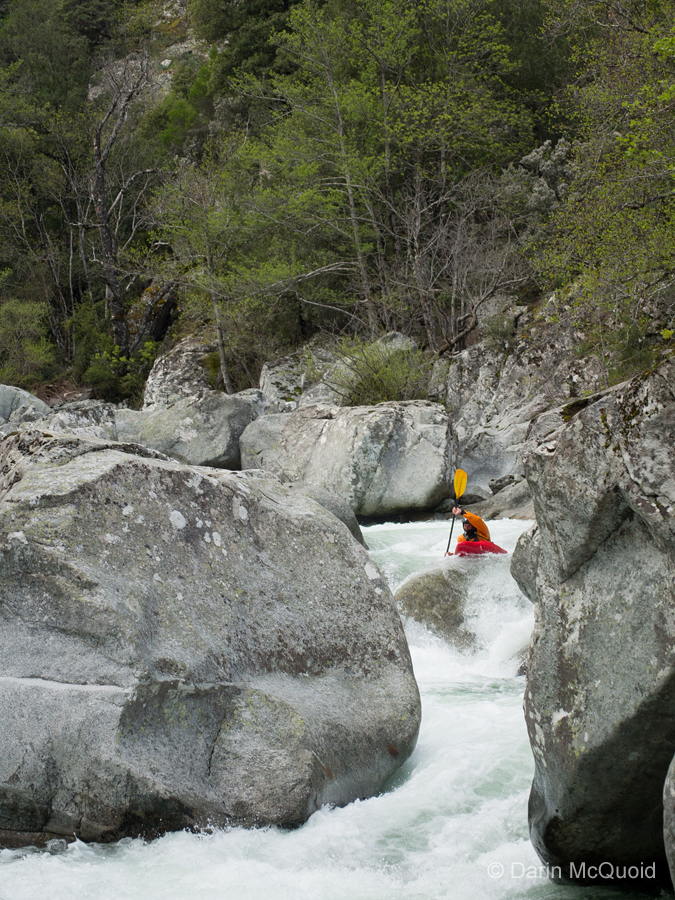 Still part of the same rapid, Harald boofs through a nasty backed up hole. 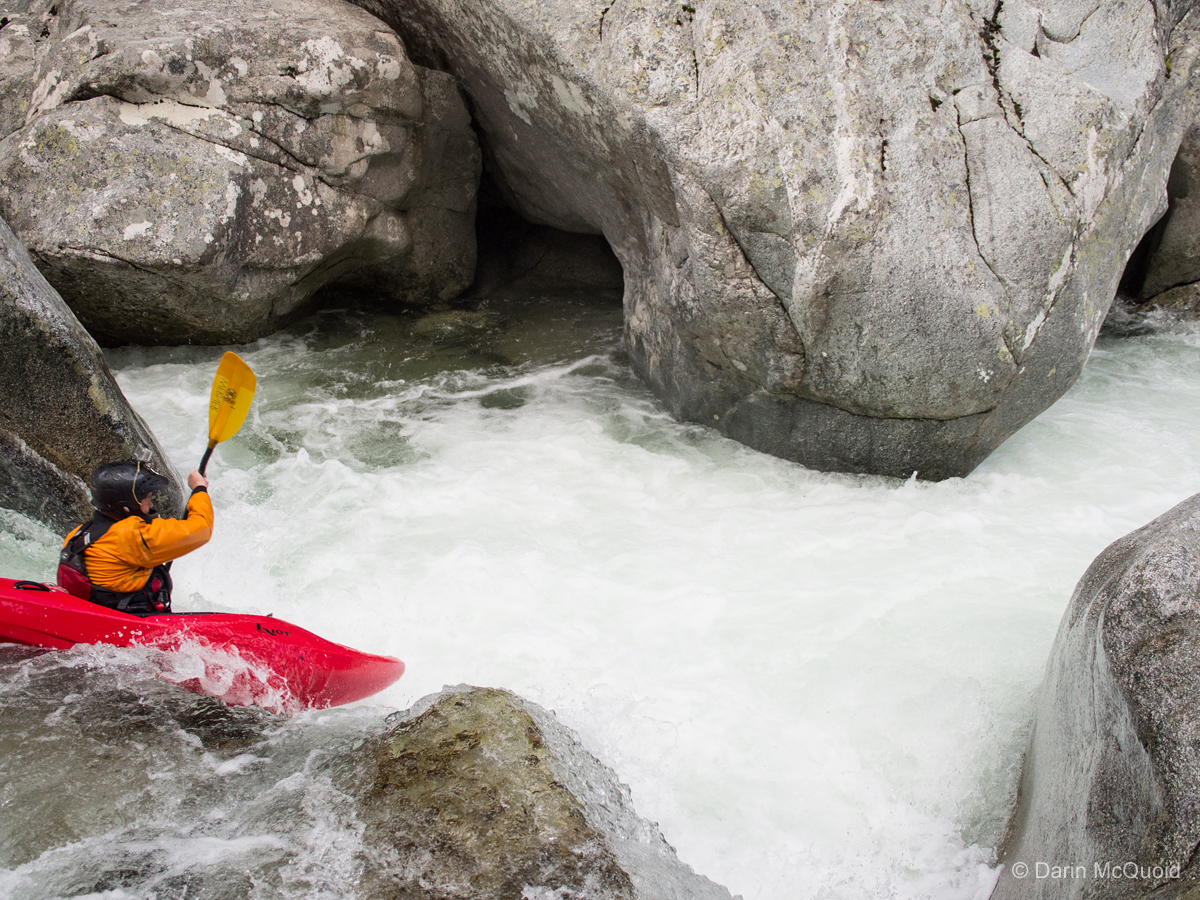 It seems to be non-stop action at the flows we have. One class V after another. Although high flows cover many siphons there are still more than enough in play to motivate me to walk a rapid or two.

Rok Sribar on a slide to avoid the siphon kind of thing. 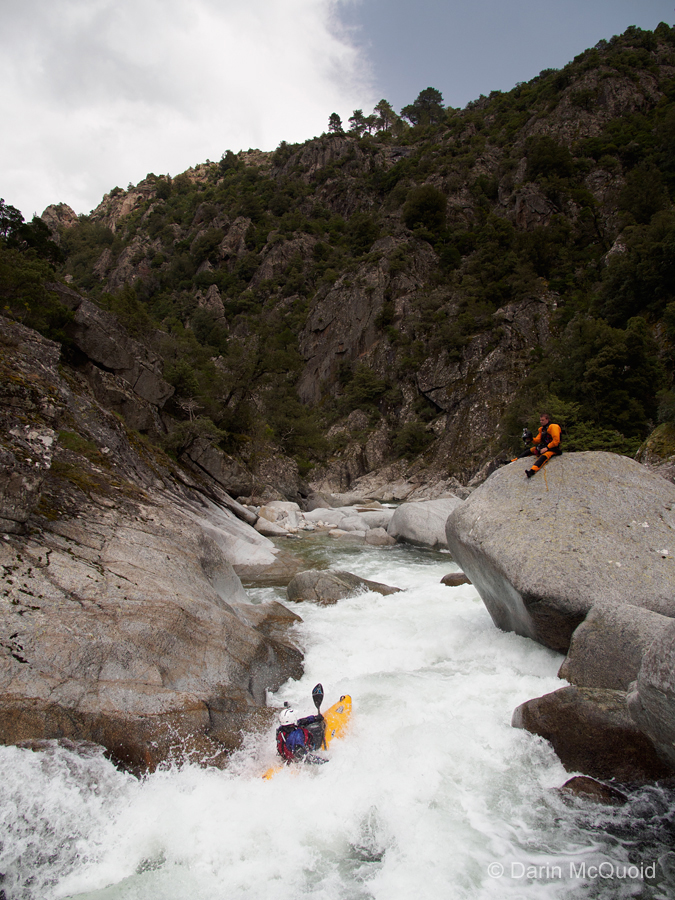 We take turns scouting, which enables us to make good time. The pace is broken up quite well, big rapids interspersed with some fun read and run.


Michael Stromer looks on as Rok Sribar gets into another Vecchio classic. 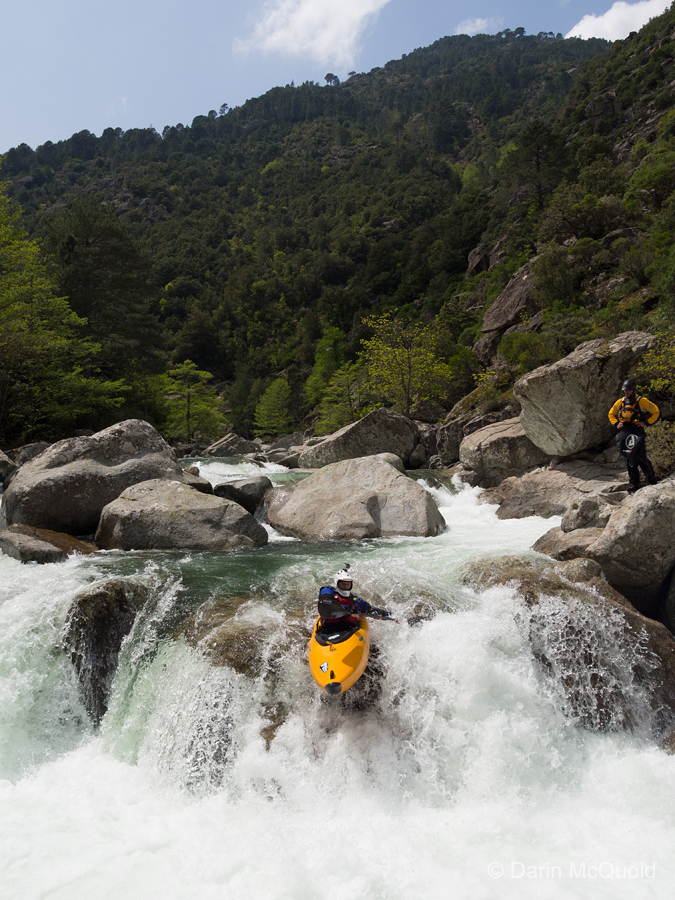 One of the key rapids of the run, Michael Wutti has good style through it. 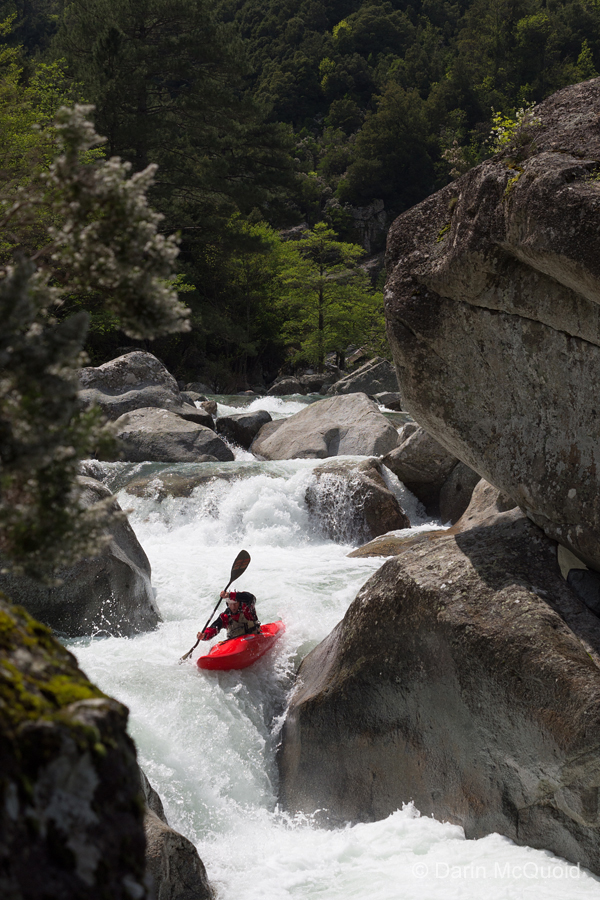 Said rapid leads into a nice glory boof that Mr Sribar takes in the sun. 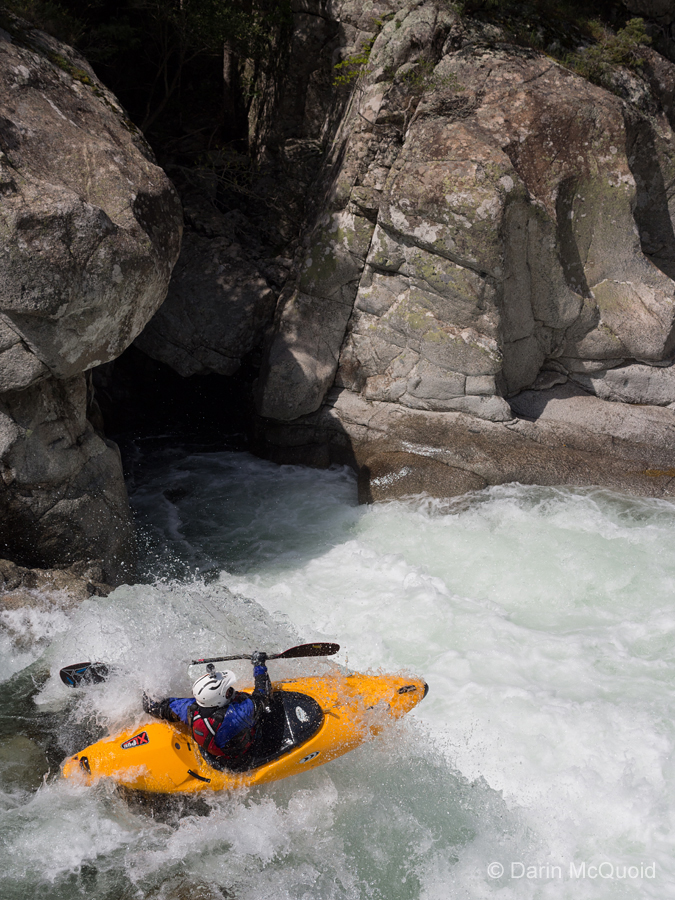 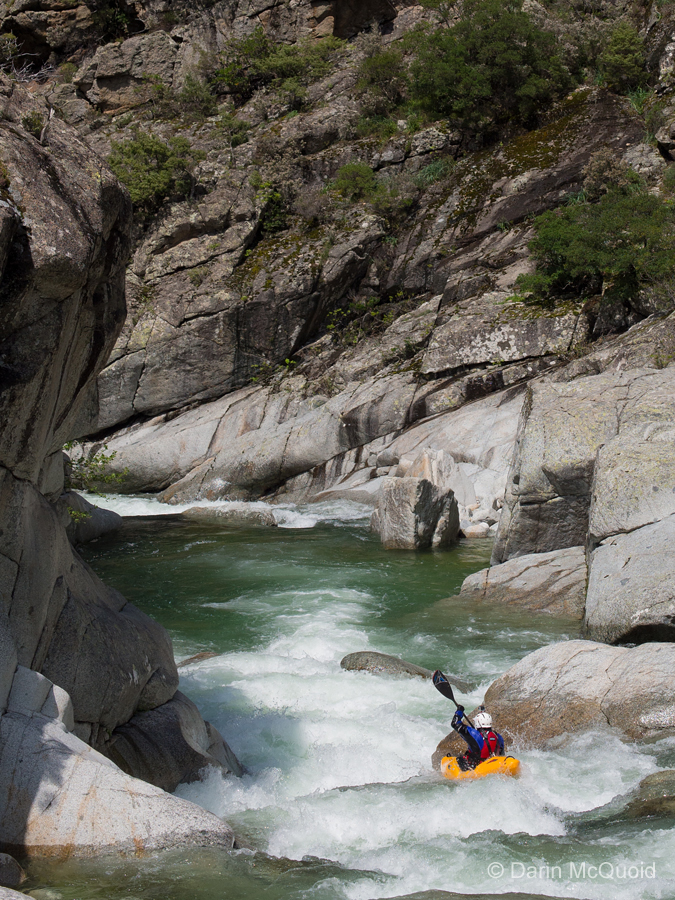 Just around the corner we stop for lunch at a common portage. At lower flows the sliding falls has been run, but it looks terrible today. If one wants to hike out, this is the last good location to do it. We relax in the sun, happy that things are going well and we are making ok time down the river. Just downstream is another portage around a siphon, this one takes some rope work and it's not as easy to put back in due to high water.


Who wants to go last? 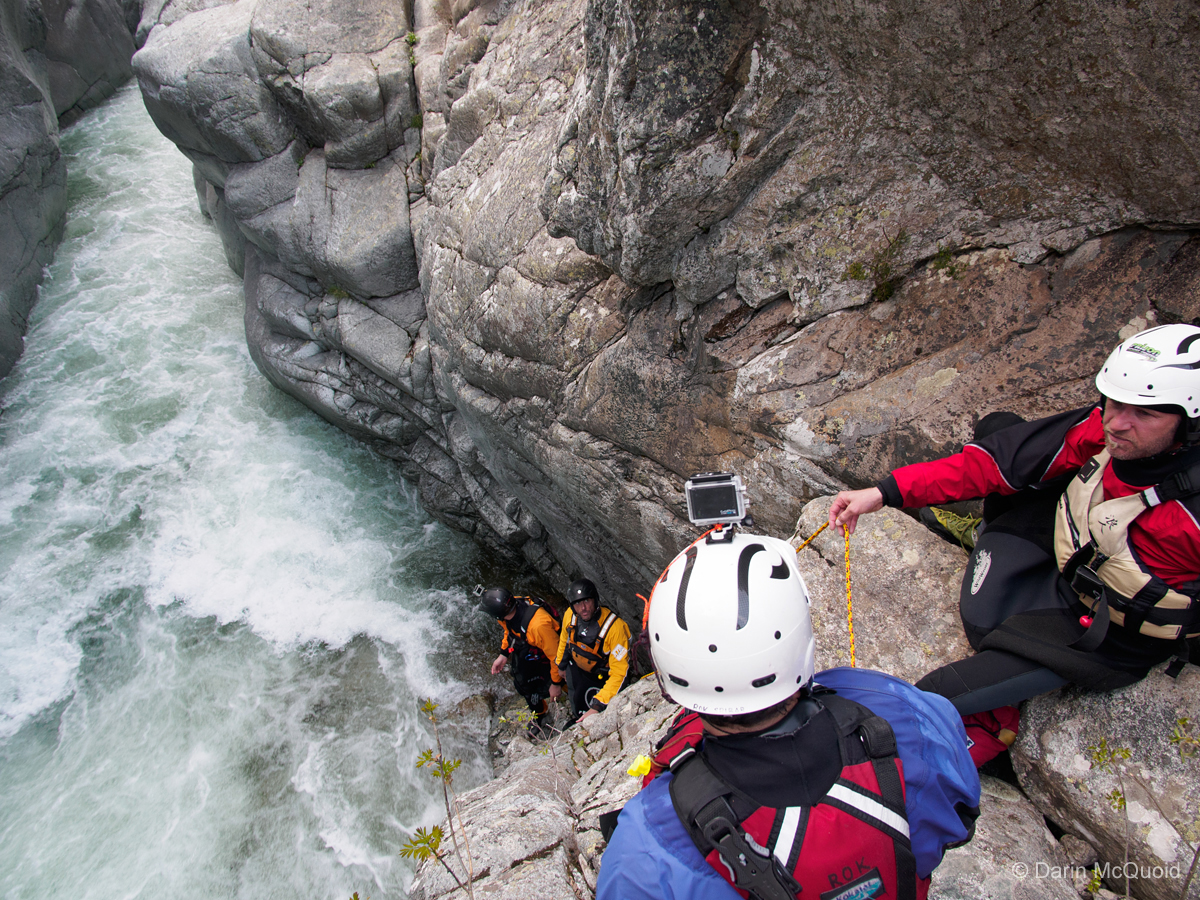 Around the corner we experience the culmination of what the Upper Vecchio has to offer. Many large rapids locked in a gorge. We're able to scout most and make good time down to the third mandatory portage. Now things get interesting. Where the portage normally starts is underwater. We must be seeing peak afternoon flows. We're forced to paddle up to a large crack and tenuously step out of the kayaks into a chimney climb in the crack. It's a delicate affair because water is flowing into the crack, and it's just wide enough to pull a kayak in. That behind us the portage is not over. We continue over some big rocks, then drop through a cave. Back in our boats we're still walled in. A scout reveals a horizon and some guessing, there is no way to know and none in the group remember there being an issue here. Down the right looks the most promising, and eventually we have a probe elect to run it. All goes well and we're back to making good progress downstream as the gorge opens up.


So we portage through here... 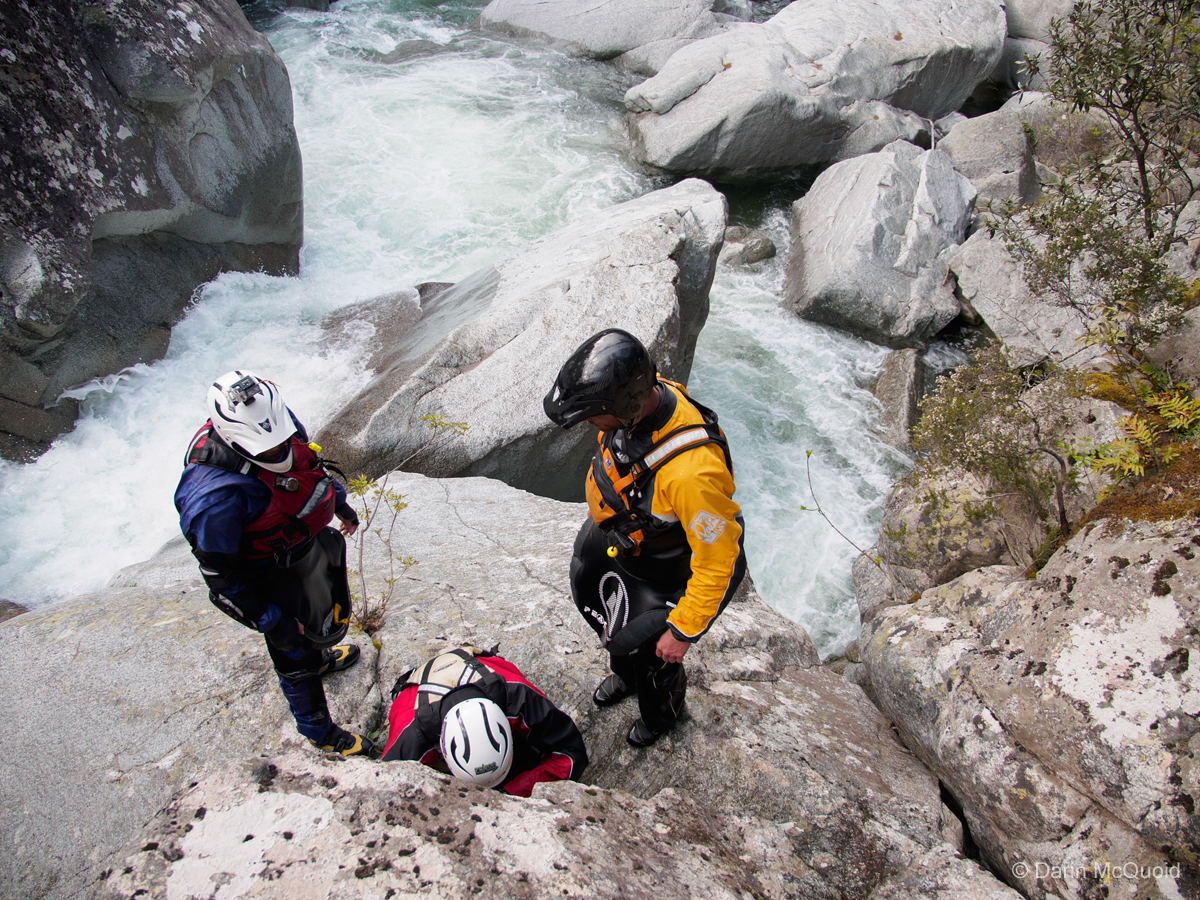 Rounding the corner, take out is obvious. It's not every day the line is through a siphon, as it normally is in this rapid. That's right, the standard line is to paddle through the siphon you can see in the lower right. Thankfully we have enough water to just go left. 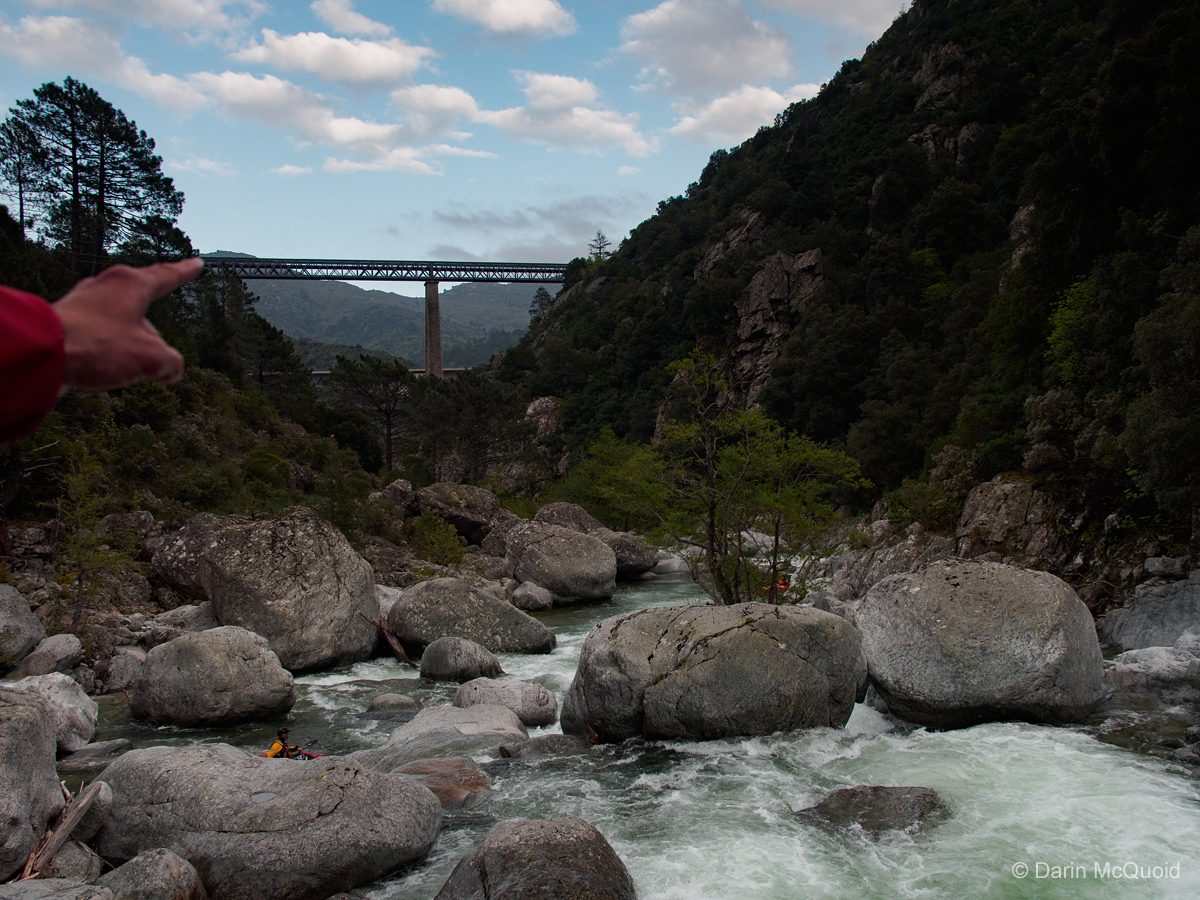 The Upper Vecchio has a well deserved reputation as a tough river. It's fun, but full of siphons and not the kind of place to be off line or swimming. We're all exhausted at the end of the day, happy to have completed climax of our trip in Corsica.