The Fresno River is not in the California guidebooks. It is a rather short river that starts at in Oakhurst at an elevation of  2,300'. Despite it's short length and low elevation, it has a surprisingly large riverbed. Flow windows tend to be erratic as it's a rain fed river. January of 2017 is having remarkable precipitation in California, and with the excess rain the ground has been saturated, resulting in stable flows on the Fresno River. So we decided to give it a try without too much beta.

Typically split into three sections, we decide to attempt the middle run, which is eleven miles with a gradient eighty feet per mile, and flowing at 1,000cfs - the perfect recipe for class IV and fast miles.


We drop a car at Raymond Road / 415 hoping it will be ignored, there have been reports of unfriendly land owners here. Despite not having directions shuttle is easy to figure out, we drive upstream on an unusually clear Central Valley day, which gives us views of snowcapped peaks in the High Sierra, and a lot lower as there is still snow at 3,000' in the shade. We go a bit too far and it's all private land, so we turn around and decide to put in on Crooks Creek because there is parking that's not in sight of any houses.


Nice parking and no signs or shotguns, perfect. 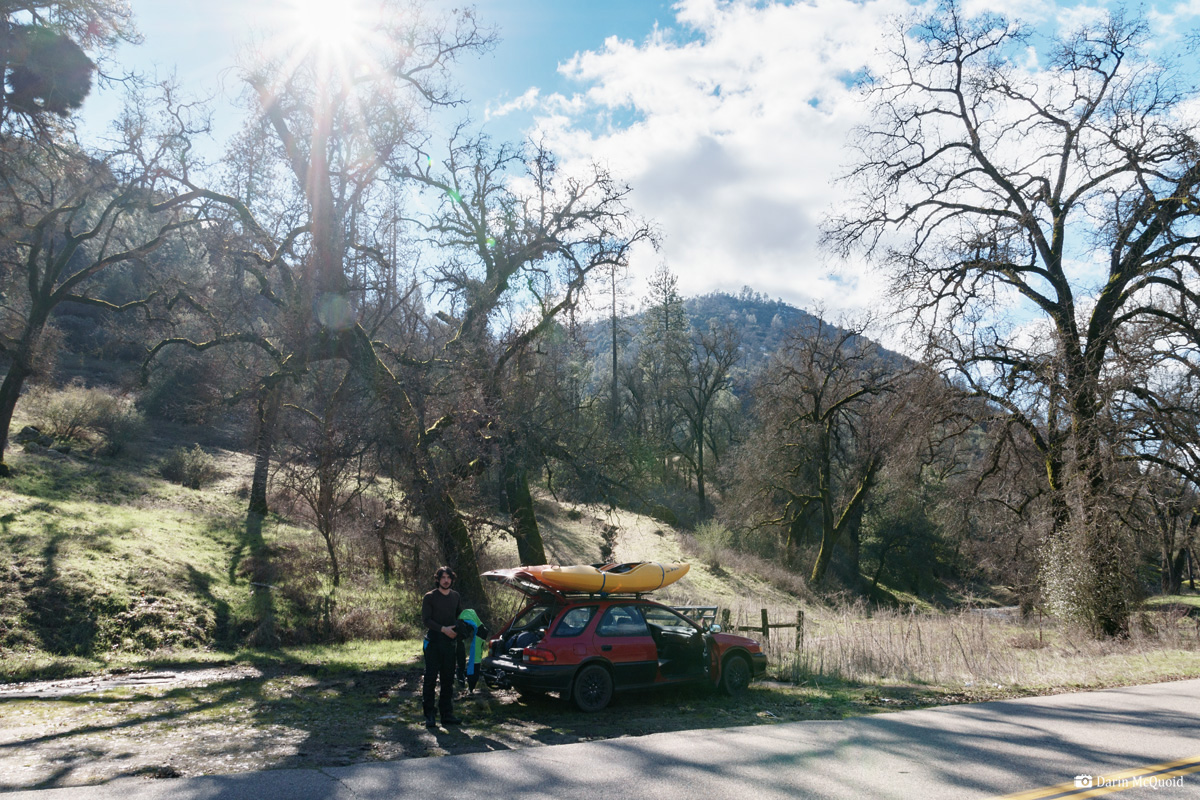 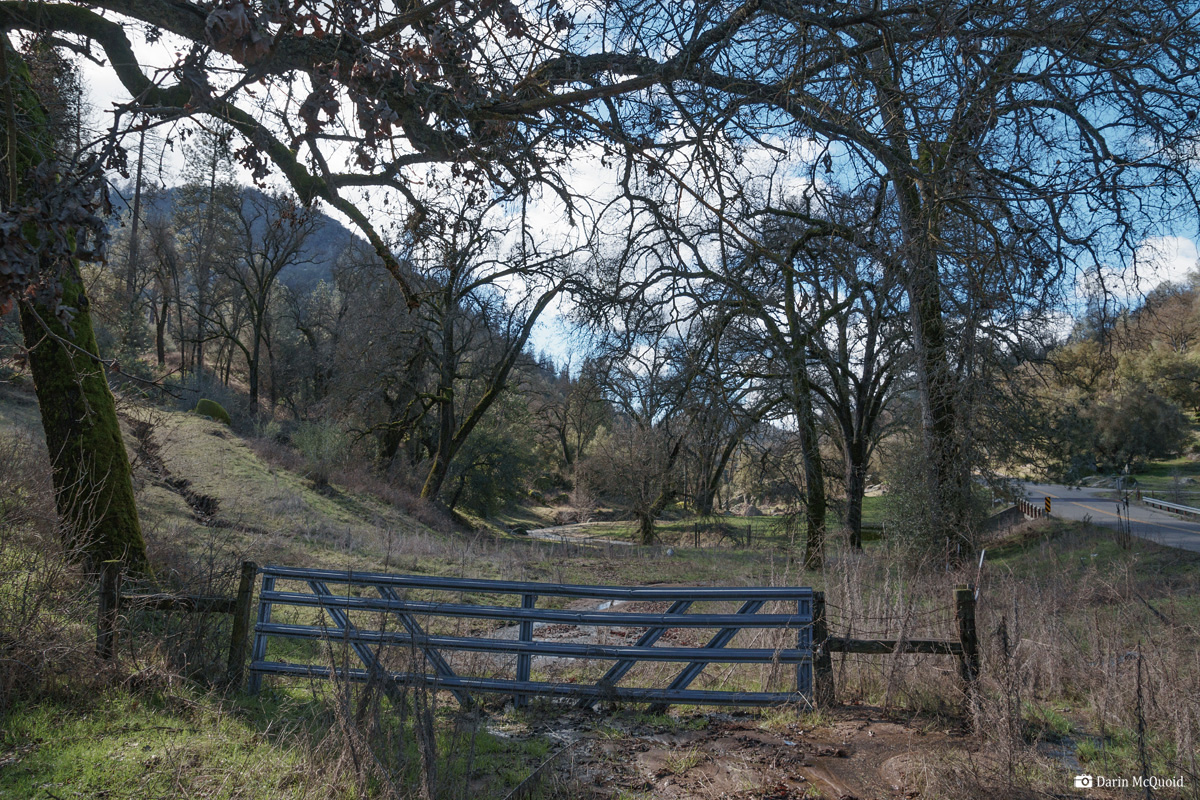 The probable first descent of Crooks Creek is epic and harrowing in nature, involving many brownclaws, perhaps too much stoke with some bro-isms and chest thumping thrown in too. Really it's just a hundred feet of low volume and low gradient that's better than walking. A local gentleman waves and gives us a thumbs up. After hearing about unfriendly locals, this is nice. 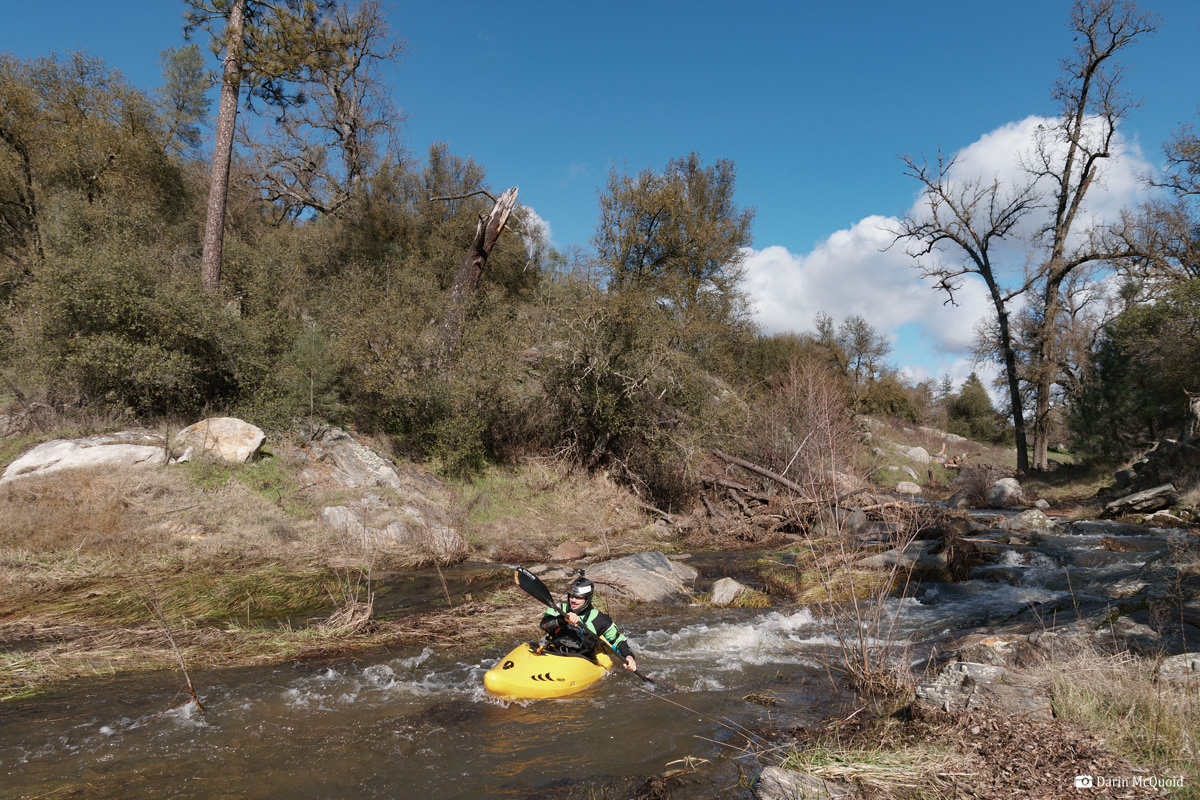 Looking upstream at the Fresno River where Crooks Creek comes in. 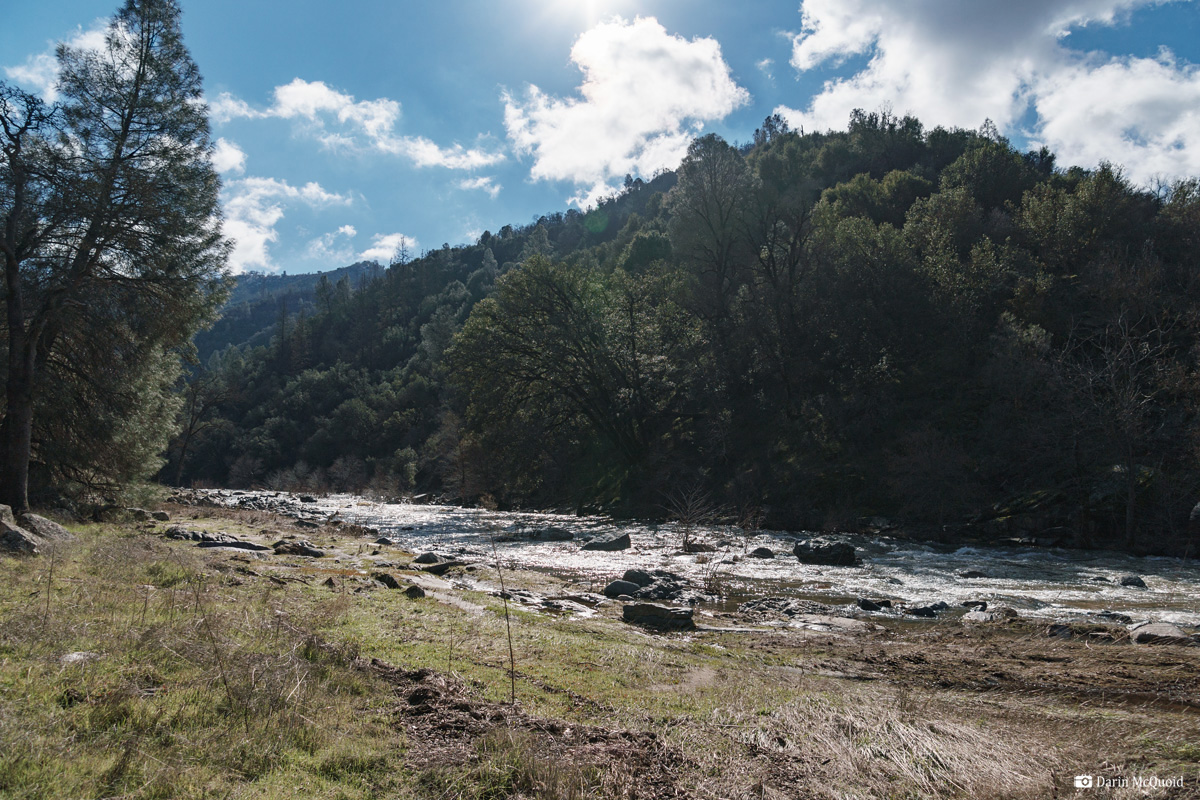 We're expecting quite a bit of flat water and a downstream horizon is a pleasant surprise at the confluence. 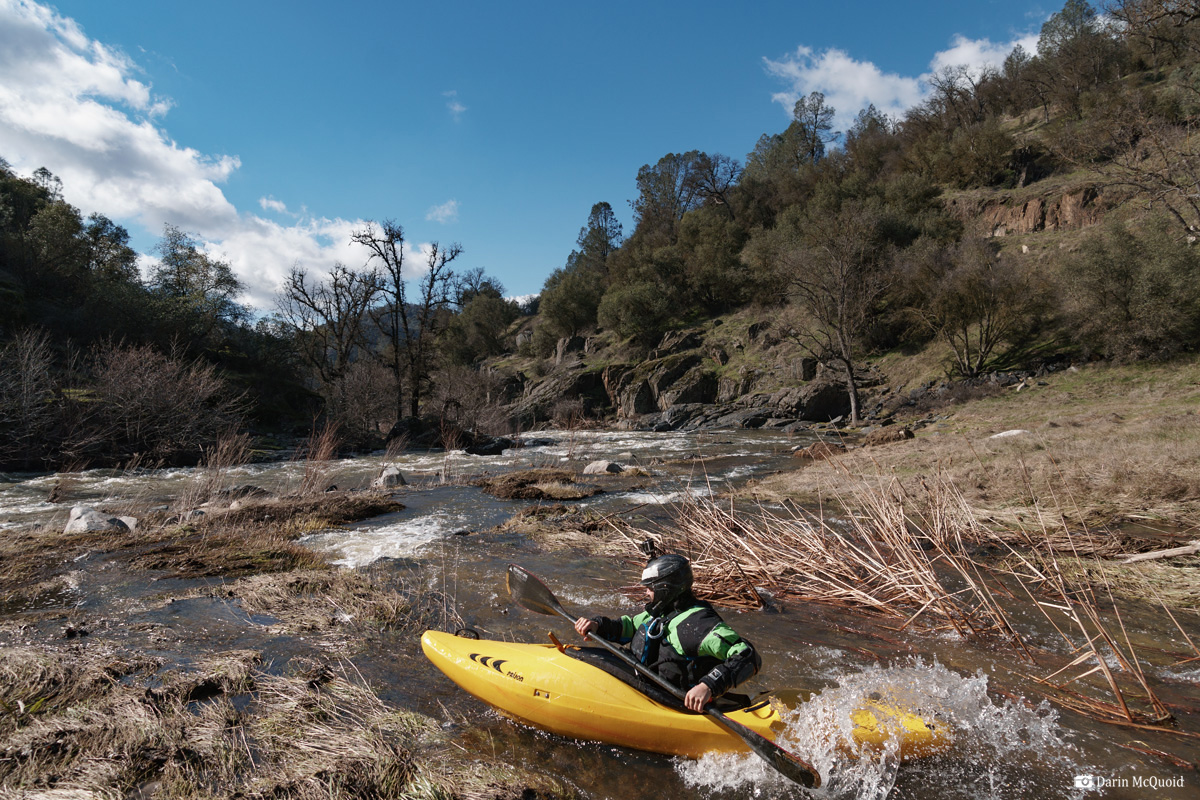 On the Fresno River we make quick progress through fairly continuous boulder gardens. Green rolling hills abound, it's a good time of year to be here. We pass a house early on, but soon it rather feels like the middle of nowhere with the occasional old cabin or random equipment. The character is fun III-IV, very nice to read and run. I find it rather reminiscent of the North Fork Kaweah, but not quite as hard and somewhat less brushy. 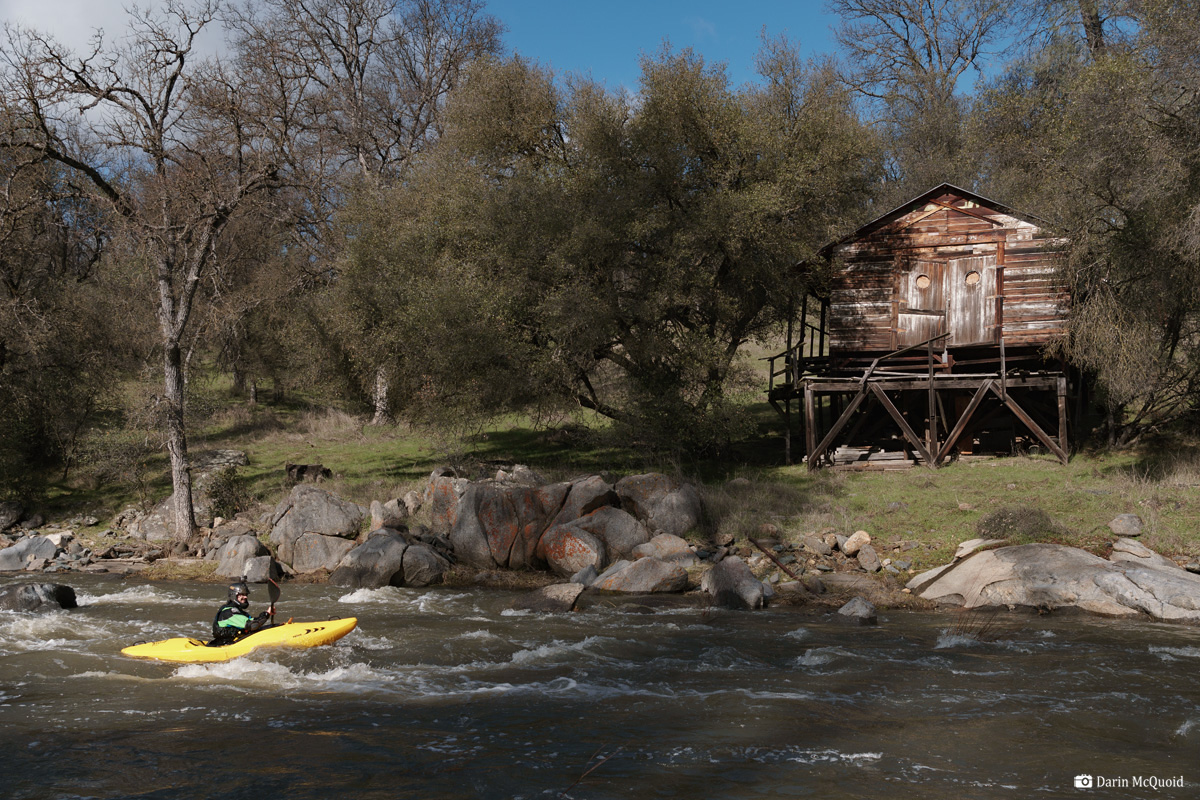 Five miles into the run the green hills give way to granite, and a bedrock rapid. 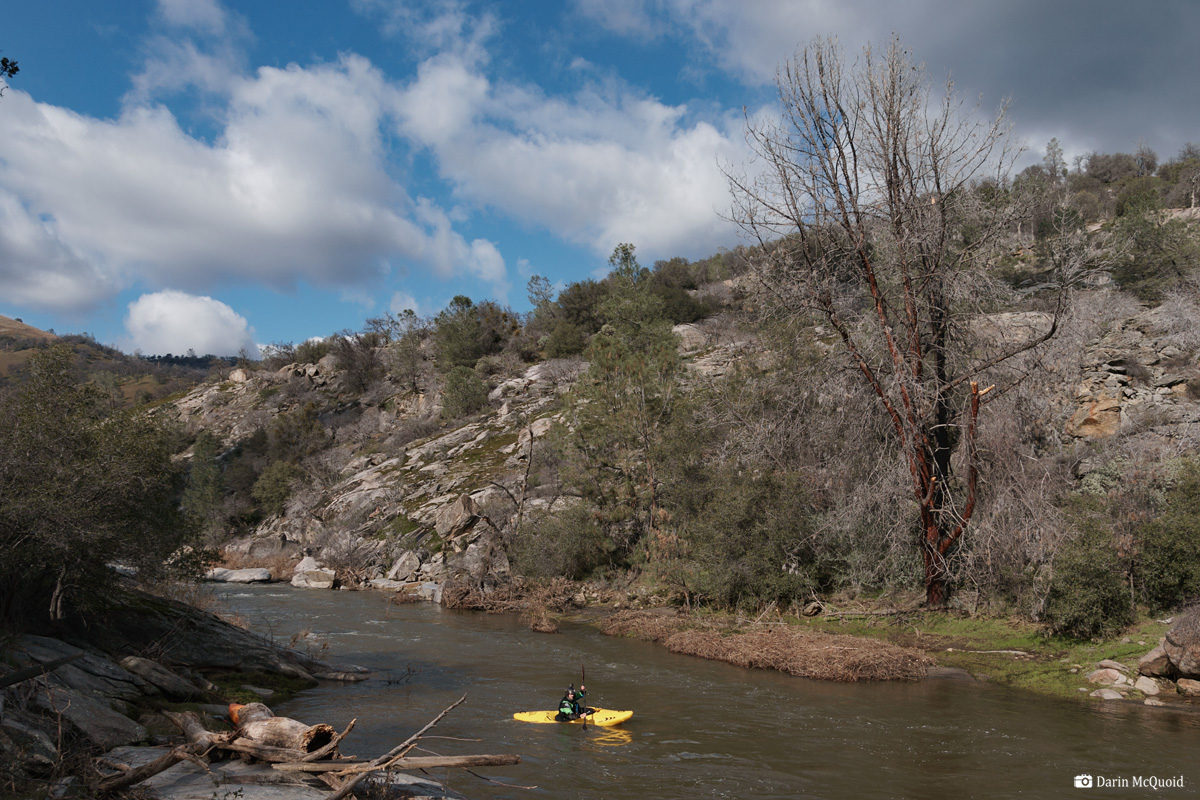 We skirt some barb wire to scout the rapid, which is just one drop through a decent sized hole. 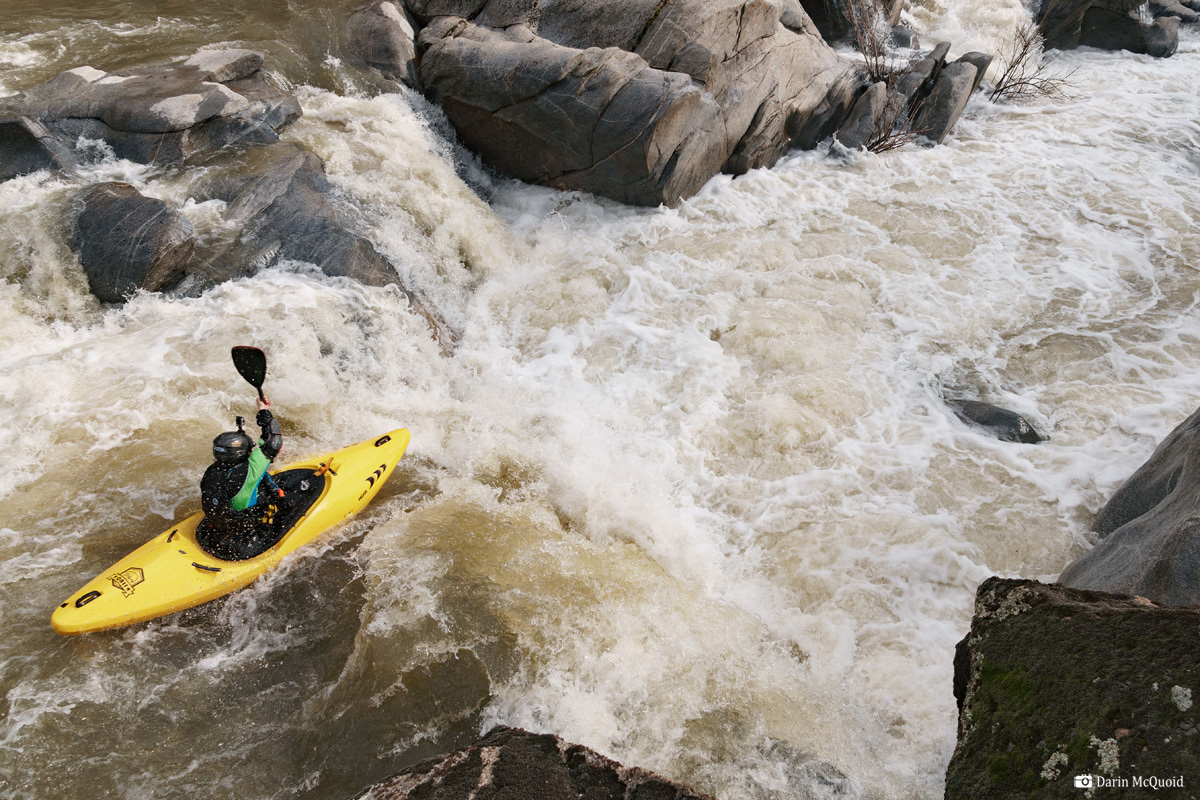 Gavin Reiser skips through the hole. 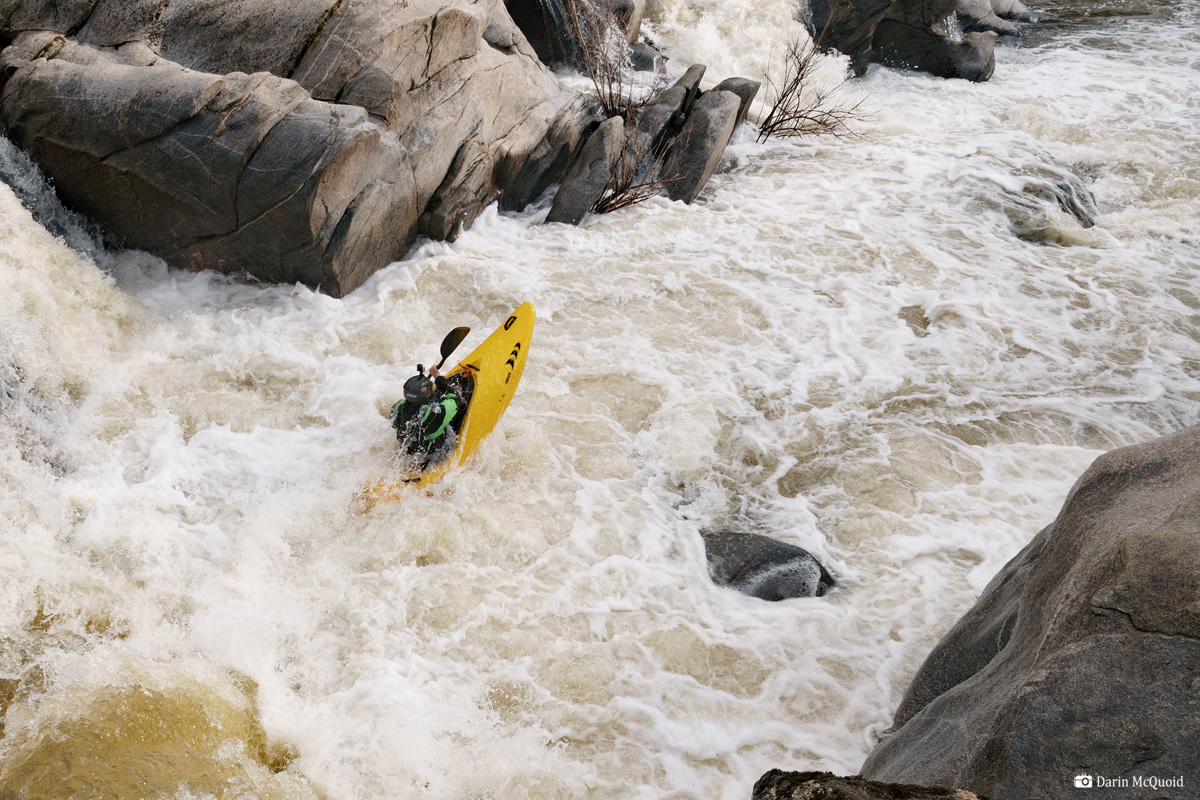 The river returns to boulder gardens and we make quick time again, passing a few houses. At the end of a long pool we have a horizon line and hop out to take a look. This one looks possible from the top, but we shake our heads once we're out and see the whole thing. The rapid has three problems. First, the lip isn't clean and it looks like a little more flow would help. Second is that the sliding falls lands in a pothole, and it would be hard to avoid hitting the wall and getting stuck in it. Further inspection reveals another problem. 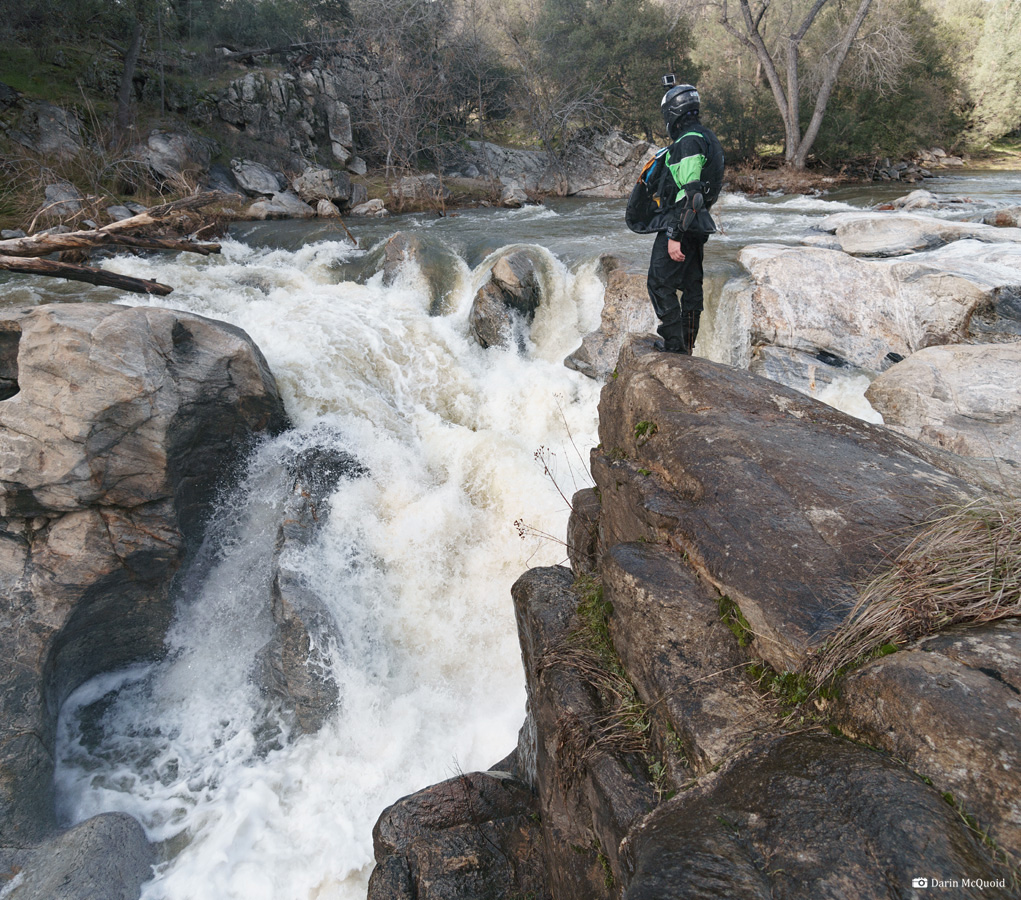 The ramp looks a little jumbly, and some water is actually flowing through it. Time to walk. 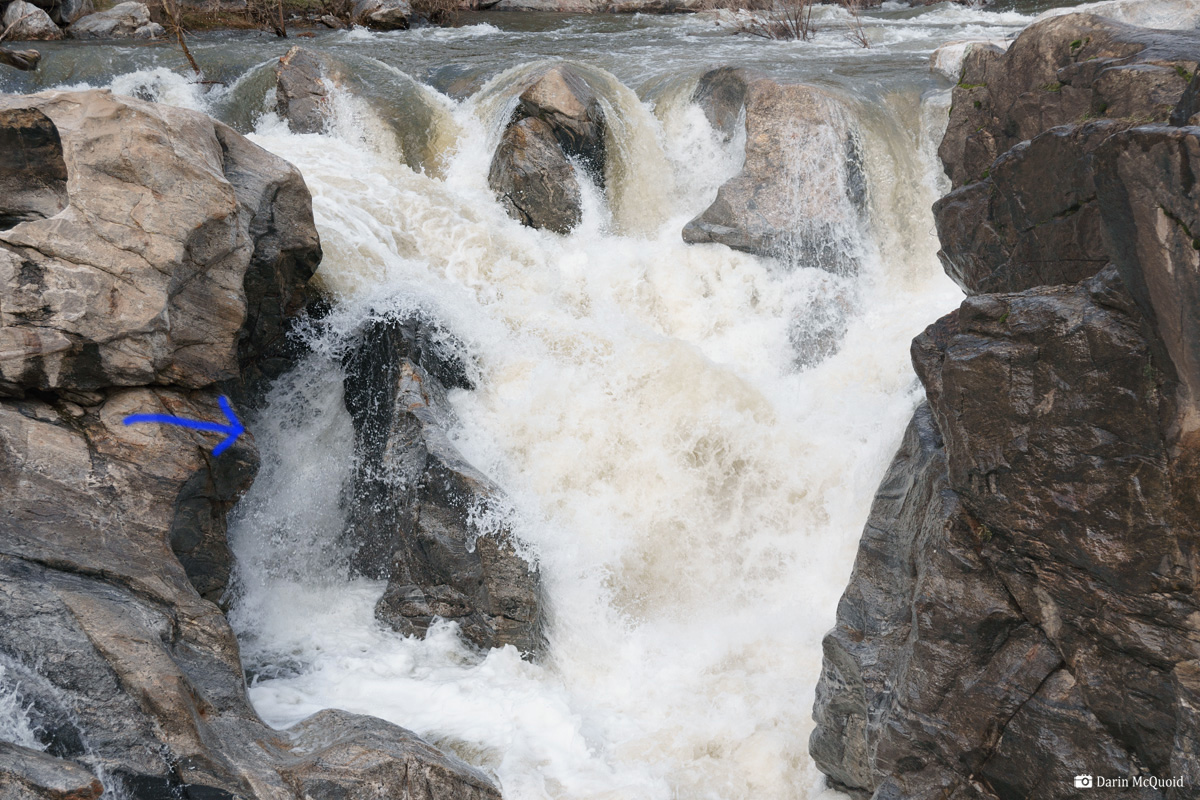 Looking at the same rapid from the lip. It's an easy portage, and here the river character changes, we're now in a gorge. 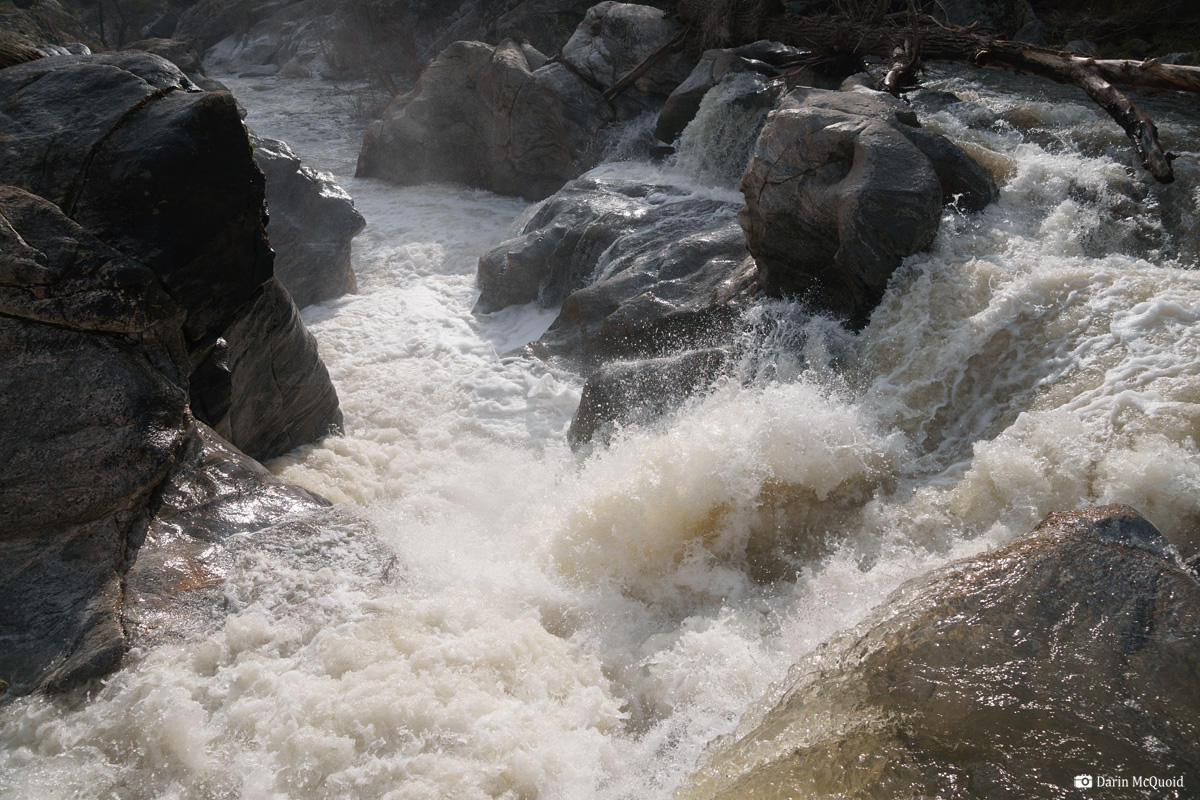 The gorge has an interesting nature, blind and intimidating horizons prove to be class IV rapids. 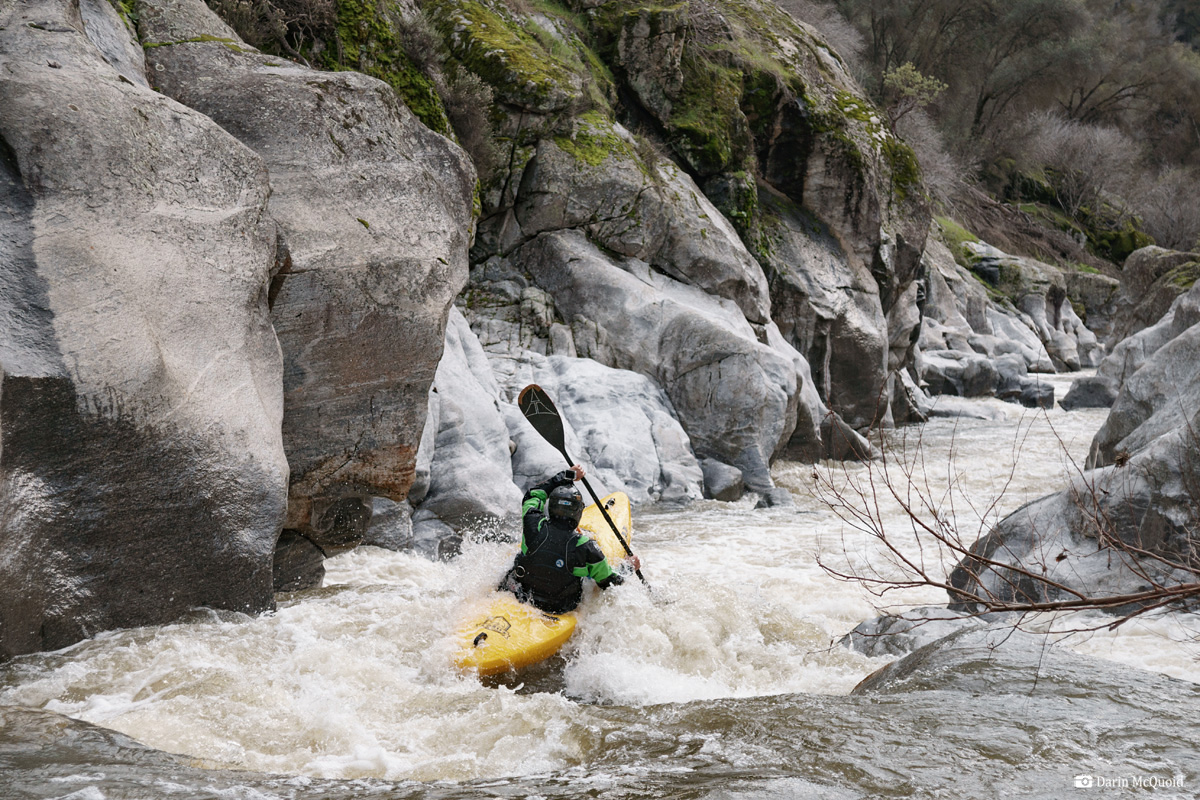 Mostly class IV. This boulder chocked in the middle of the river makes for a unique experience. We're happy that it goes better than it looks. 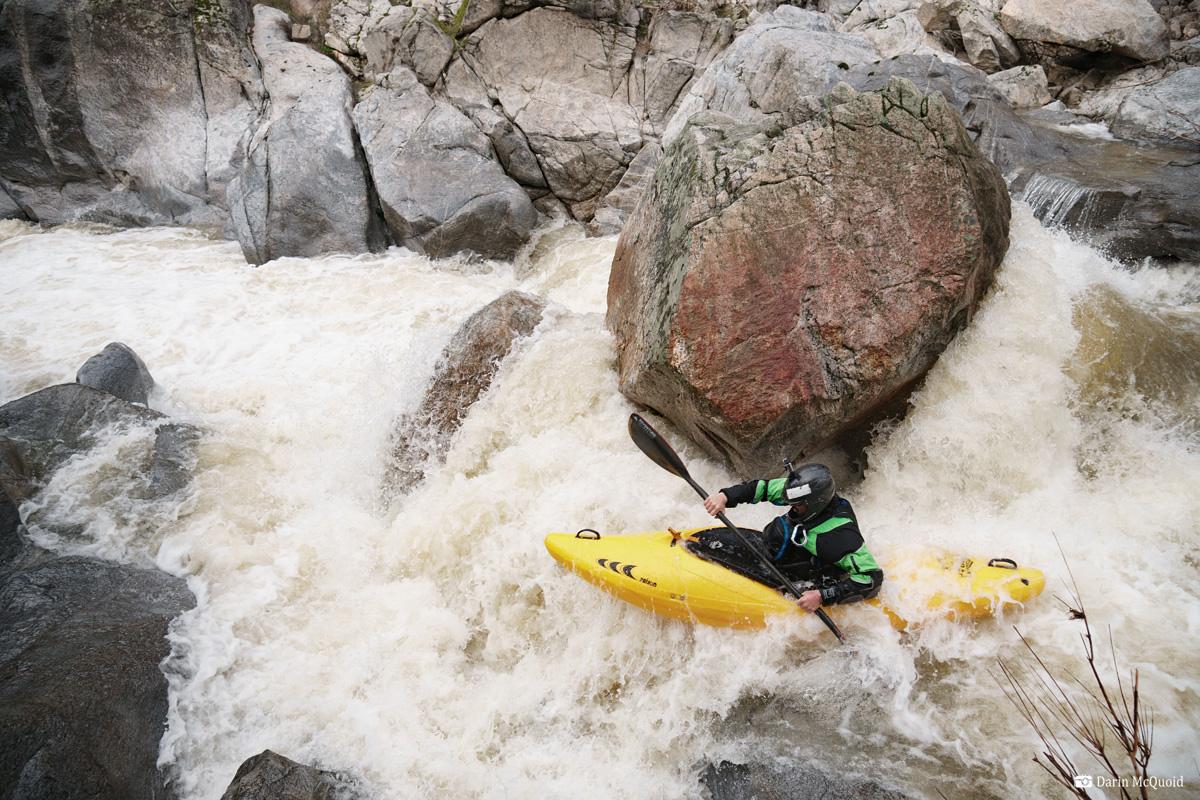 With the scouting that's required the gorge is taking a while, and it's longer than expected. We've been in it for about a mile and it's all been grade IV except for the boulder choke. Coming around a corner into the final straightaway we encounter a nasty rapid. If we had to, we could probably run it. However the rapid is really just a series of barely covered siphons. A swim or even flipping in the wrong spot could result in disaster. There might be a portage possible at river level, but we can't tell from the top and will be committed to it if we down climb to check it out. It's a high risk, low reward situation and I'd rather do a little legwork and avoid the danger. We attain back upstream and climb the hill for what feels like an eternity but is only ten minutes.


Swim in the first hole and go under the rocks at the bottom of the frame. 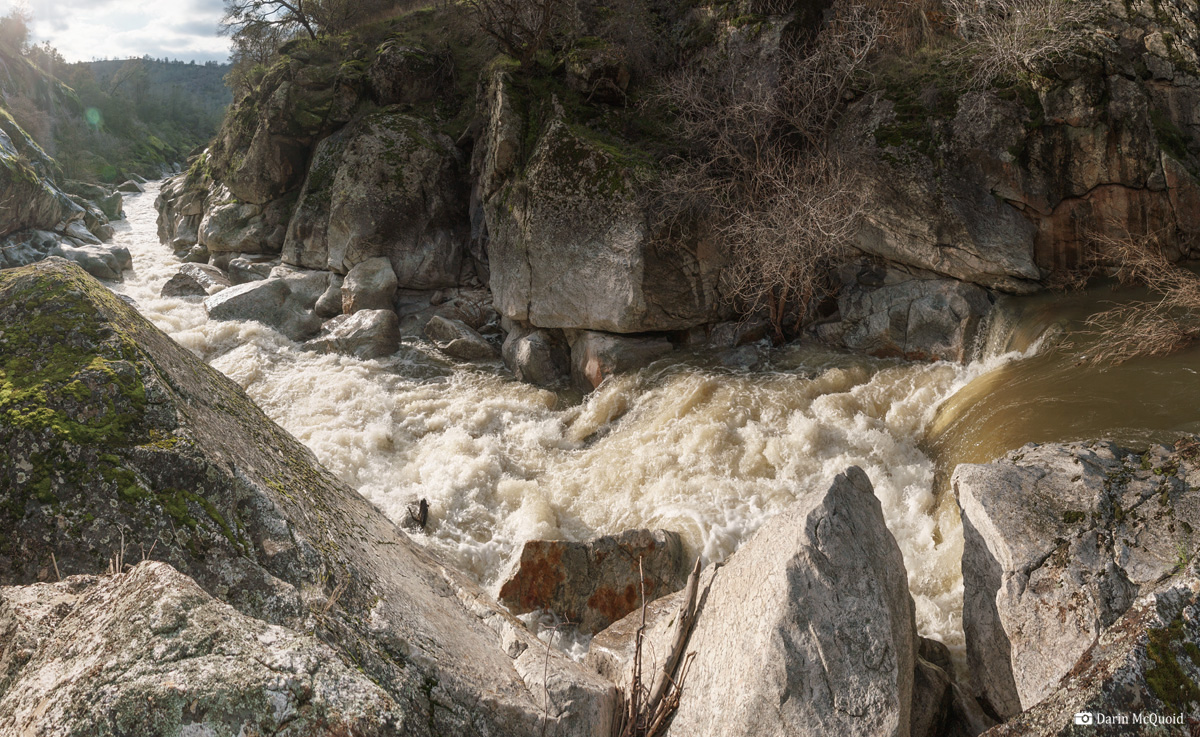 Just covered enough to probably be runnable. Unless you sub out and vanish into the rock pile. 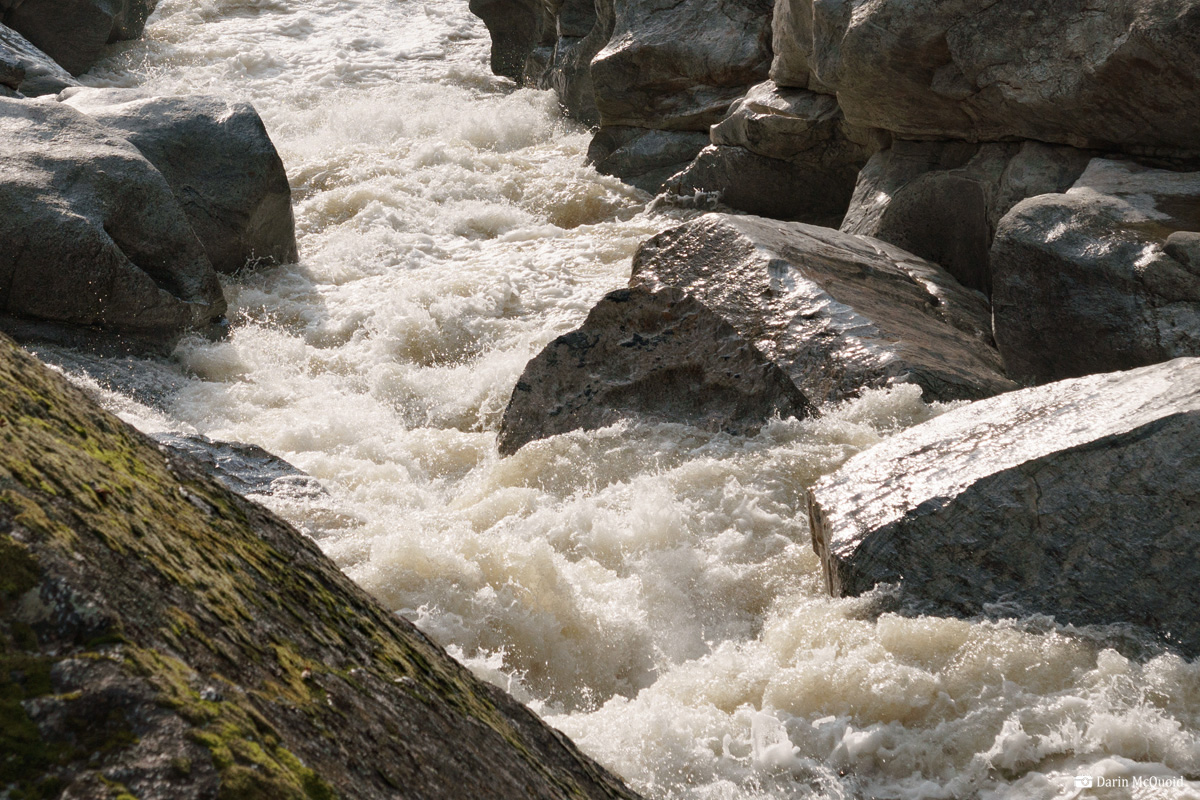 Climbing out is steep enough to get our hearts pounding. 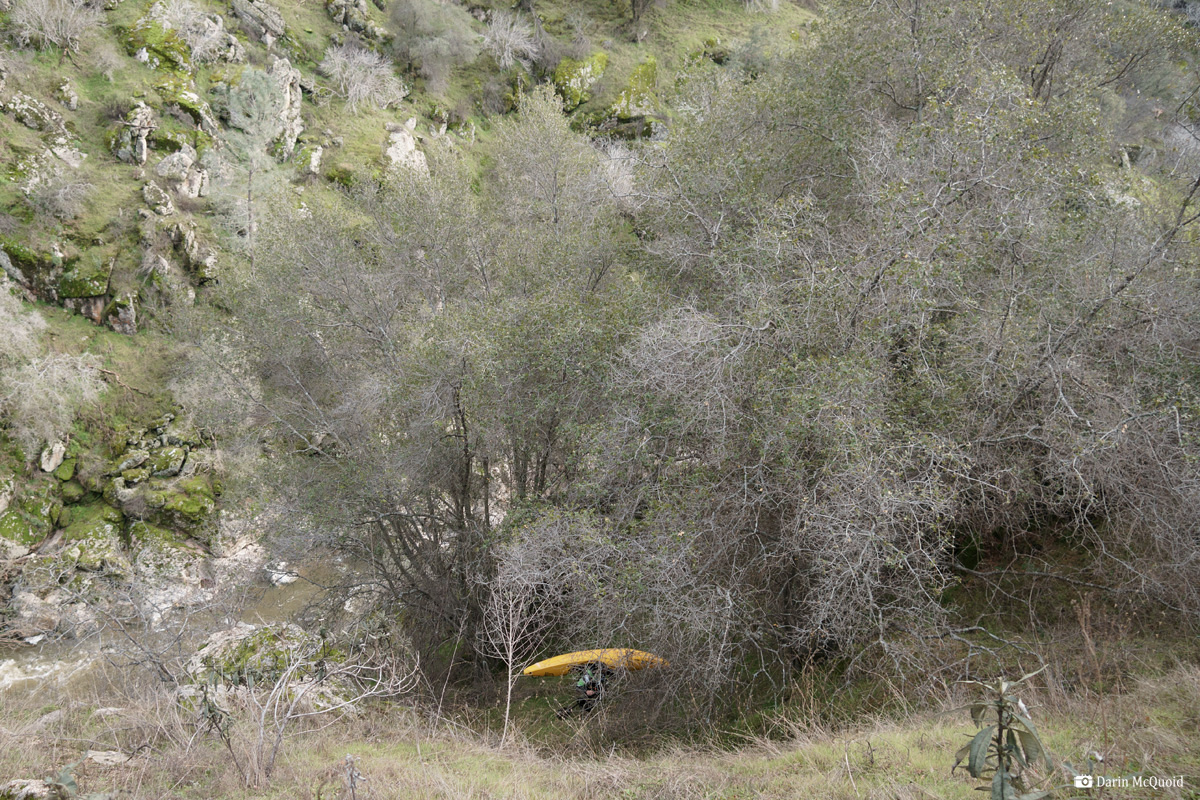 Ten minutes up and there is a charming view upstream. 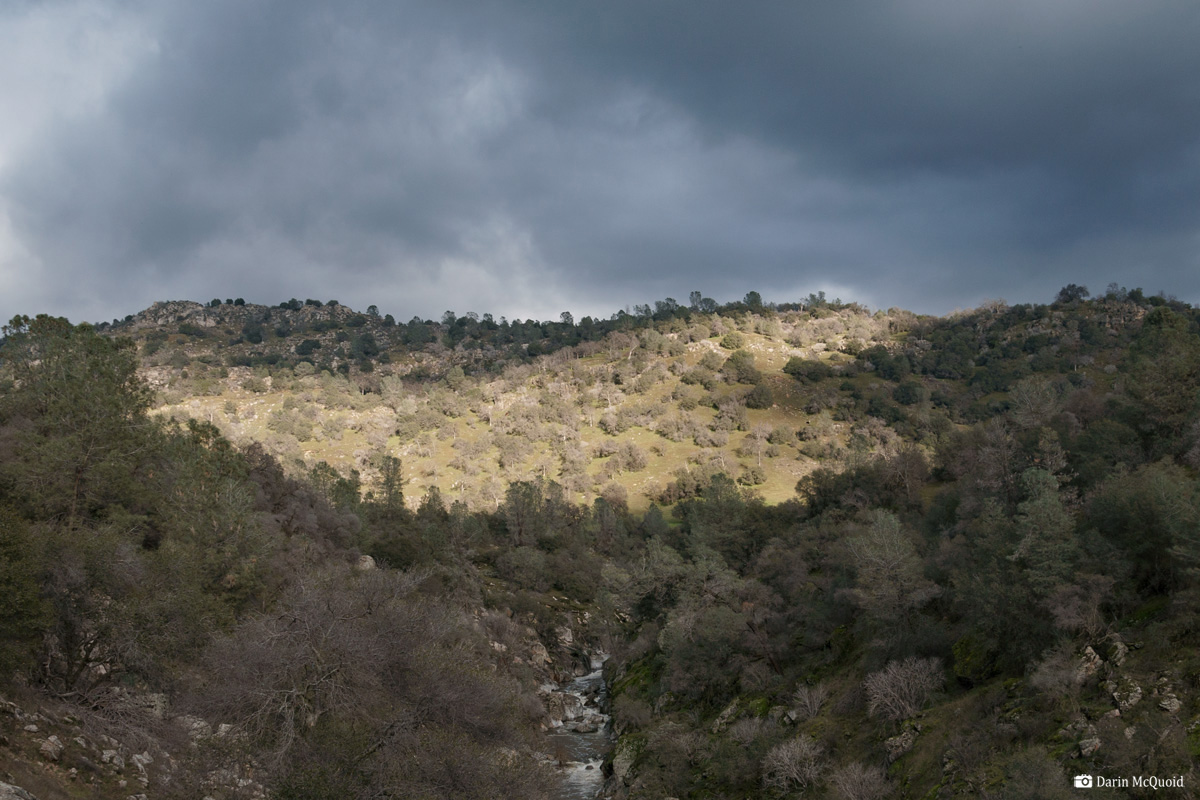 Some nice rapids in the gorge we came through. 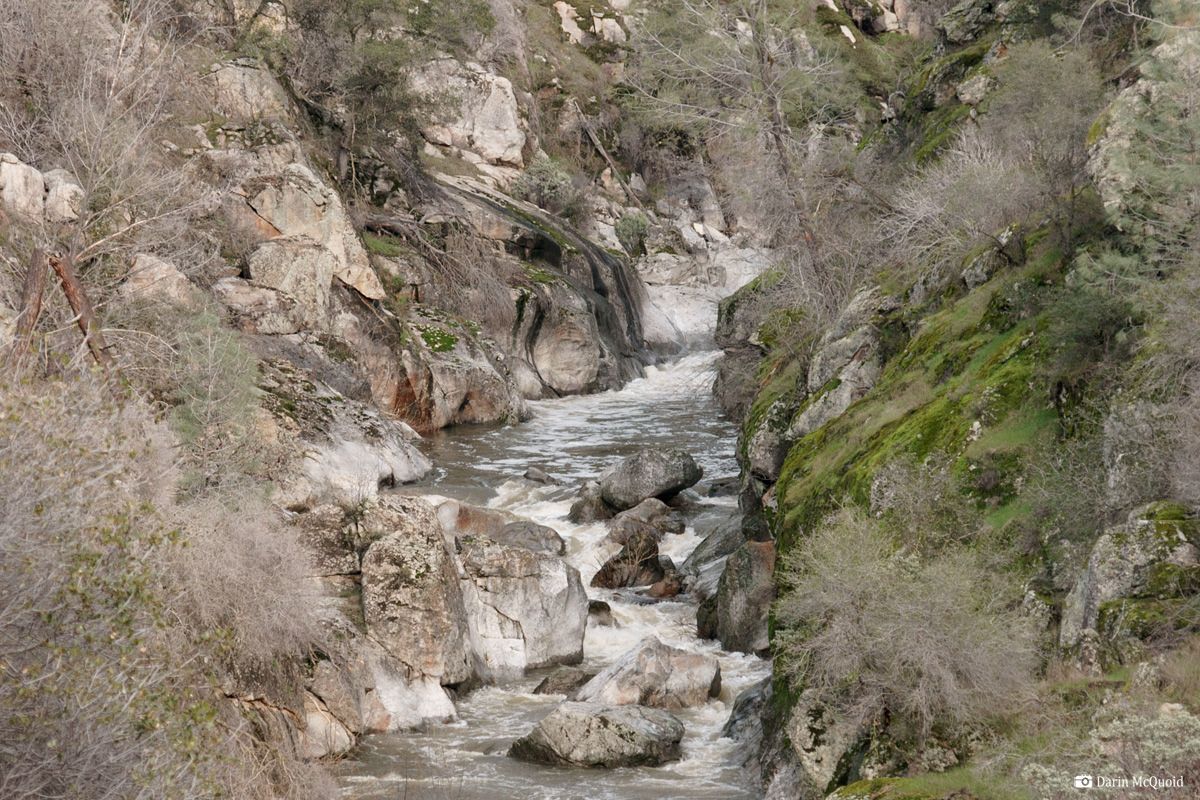 Above the gorge we follow an old flume and end up on a quad track, which takes us to the end of the gorge. Thirty minutes of portaging and we're back on the water. 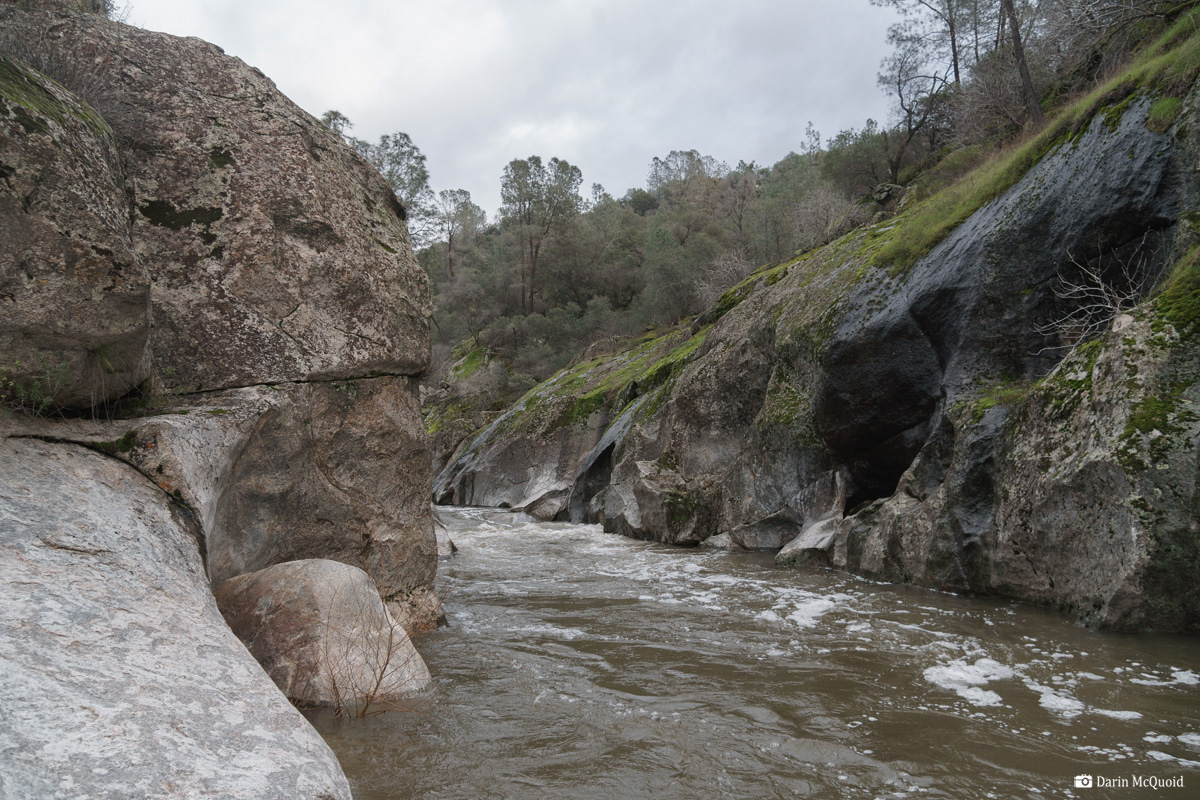 It's getting late in the day, we still have four miles to cover in the next two hours. Time to get moving, hopefully the gorges are over now that it's open. 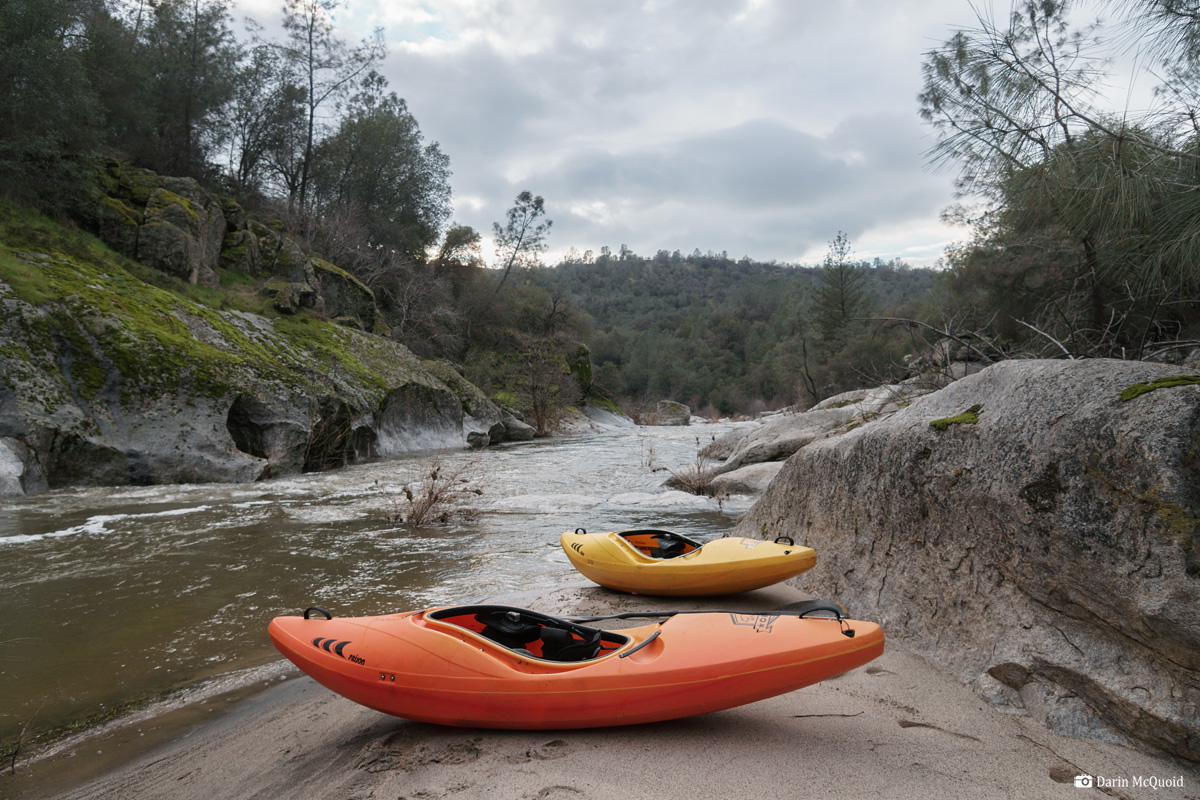 The river has resumed it's open boulder garden character, but it's only a brief respite. Less than half a mile later we're on top of another gorge. 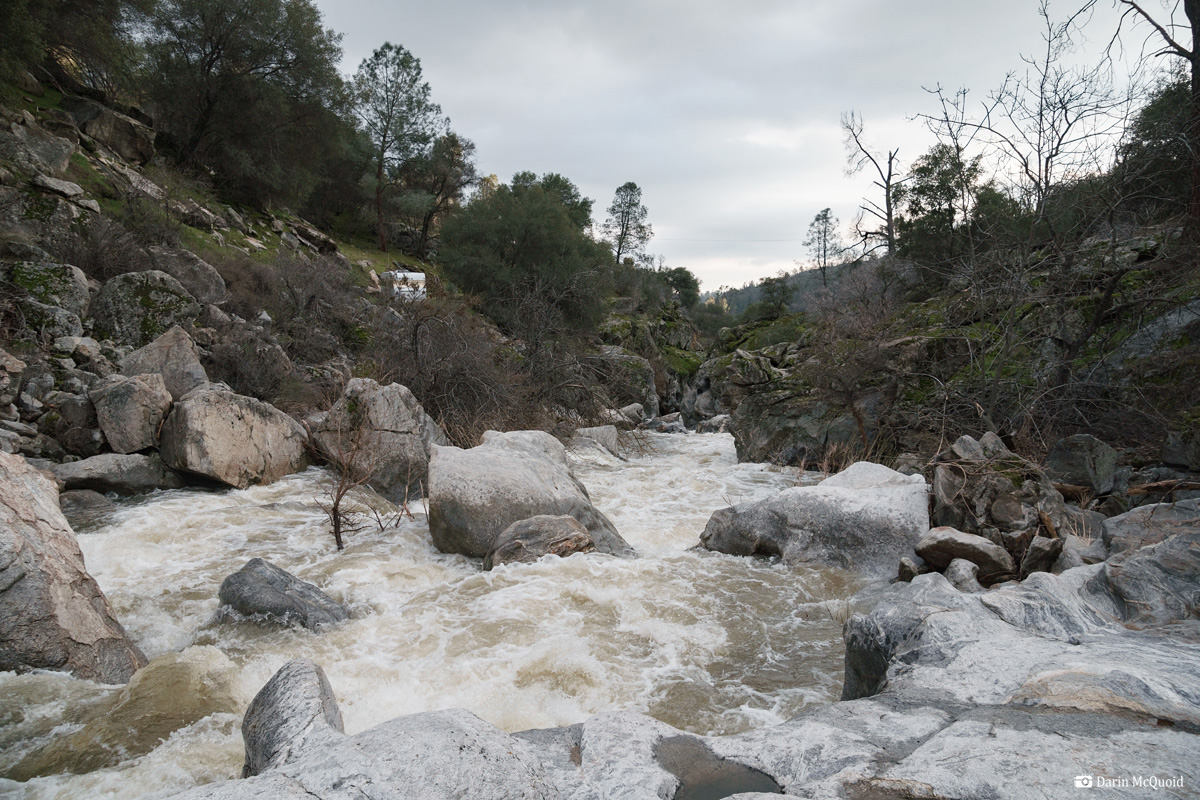 I don't need to scout this to tell you it's not pretty down there. We make a quick portage on the right. 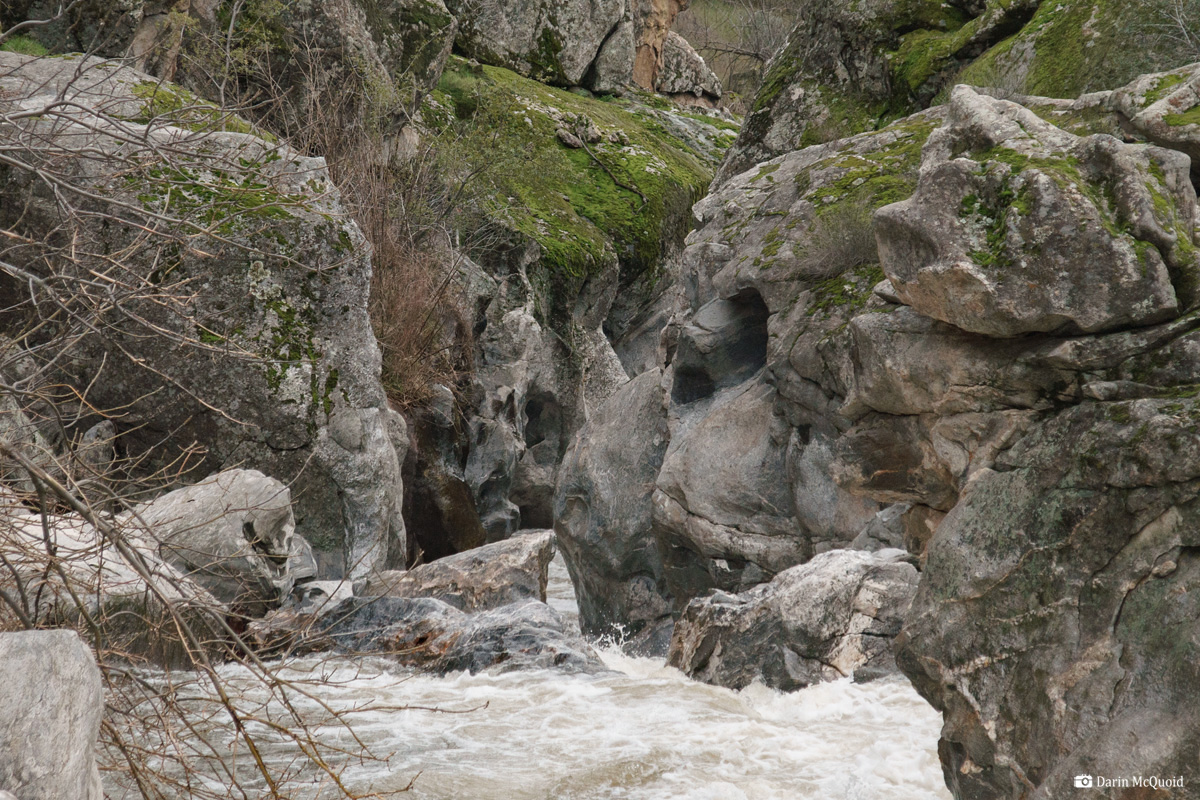 Now it opens up again, and has more flat and plenty of houses. We relentlessly paddle downstream to make take out before dark. We're out of our kayaks once to walk across a road that fords the river. Perhaps because it's only two of us, we have no contact with the land owners and quietly move on out of view. The rapids are still decent down here, yet it's a relief to see the bridge and take out. We have just made it before dark, and are happy to see the car just where we left it. While loading up with chat with two friendly people who just moved to the area, apparently we ran into all the good locals on our run. 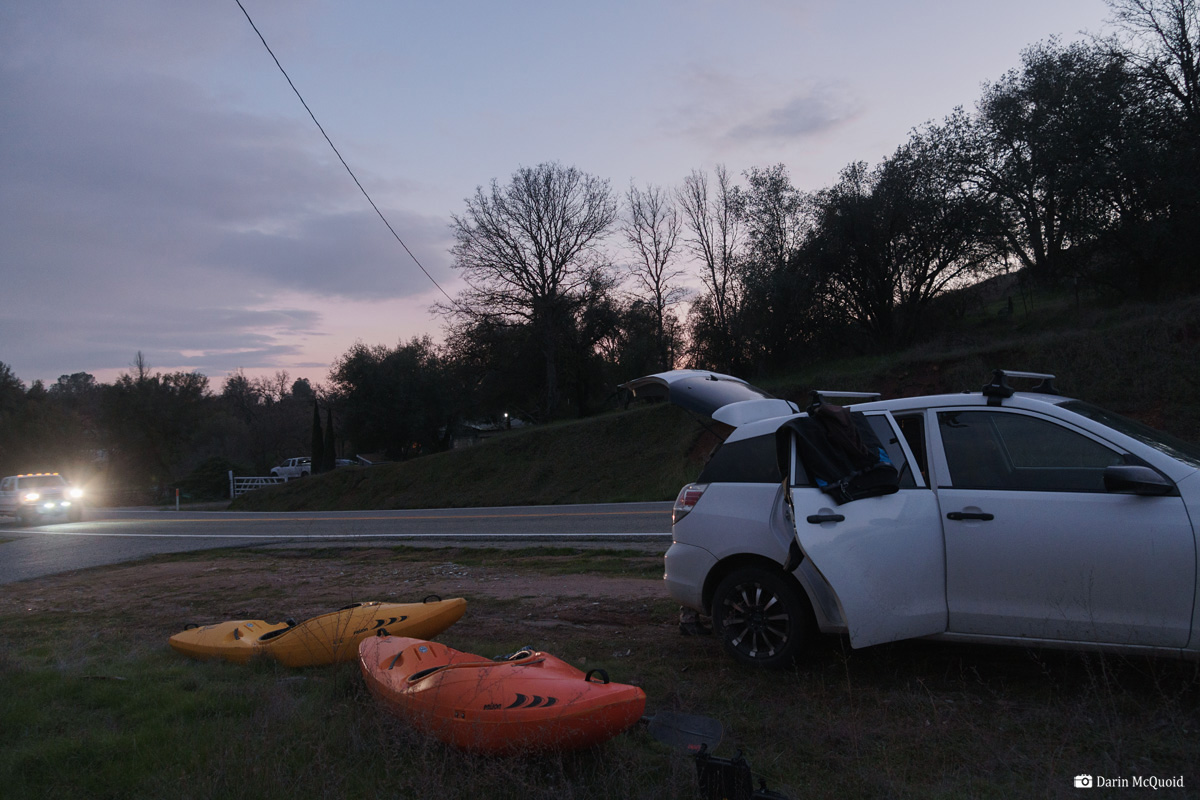 Retrospectively what can be said about the Fresno River? It's not classic because it's a river of two characters; class IV or V+.  The scenery is nice, as are most the rapids. It would be a challenging river for a group of class IV paddles to figure out, yet it doesn't have the class V most paddlers of that ilk would prefer. An adventure well worth doing, yet something that we will not be repeating too soon. We ran it with 1,000cfs on the dreamflows gauge. 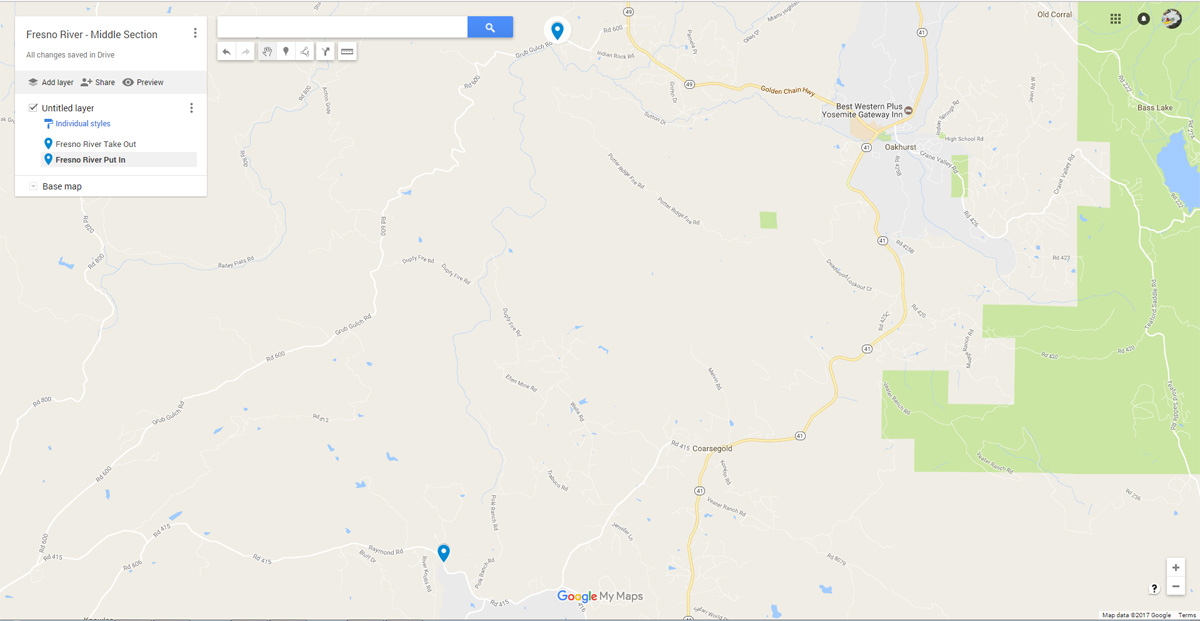