Update: It's worth noting that some time in 2011 the rock at the bottom right of Brainfade cracked in half, and now blocks the standard right line.

Saturday morning in Truckee found our group a mix of motivational levels. Having paddled the previous day on East Meets West a few of us were fired up to get out there again, while others were more focused on coffee and a mellow morning. Eventually we rallied out of Truckee, our group consisting of Gabe Forsythe, Ben Stookesberry, Jared Johnson, myself and Lizzie I still don’t know your last name. We headed into the South Fork American drainage through the Tahoe weekend chaos, debating between Lover’s Leap or Golden Gate. By the time we had stopped for food and gas around one in the afternoon we settled on doing the one-day Golden Gate run as a two-day. This run is called the Golden Gate run because in an older guidebook, California Whitewater, the run is likened to jumping off the Golden Gate Bridge. Lizzie was the only one who had previously done the run, and with a minimum flow of 500 cfs or so. At the put-in we found a healthy flow that we estimated between 1200-1500, rather on the high end. (Retrospectively it was higher than that)


The shuttle took a good long while, and we took our time packing boats around four o’clock in the afternoon. Gabe Forsythe fitting it all in the new Jefe. 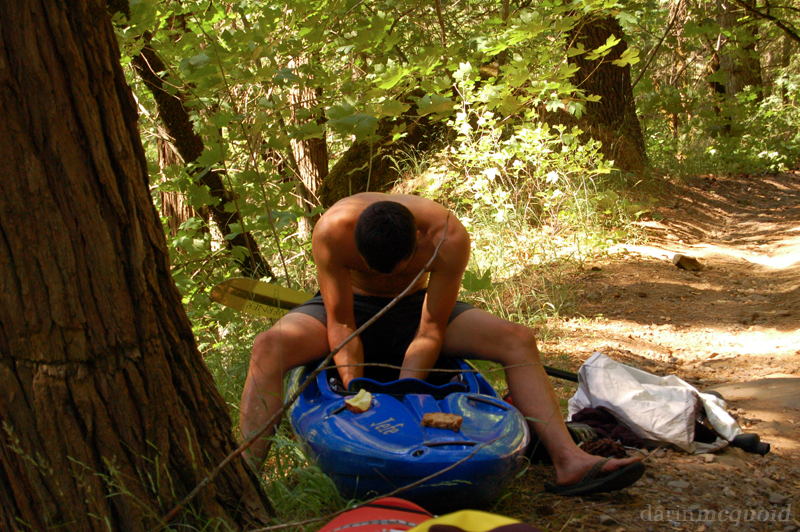 [Amazing how dubious my memory is. I finally got back to Golden Gate in early April of 2009, with flows on the other end of the spectrum, hanging around 500cfs. In my memory I got the order of the rapids mixed up. On our first trip I didn't get any shots of Initiation, the first significant rapid. I think Daniel says it well, if you're going to walk it you should probably just hike back out. 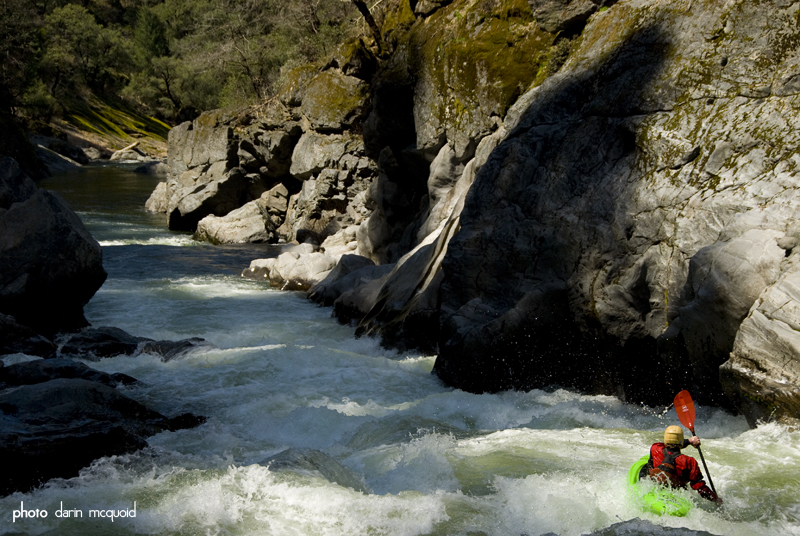 Large rapid below Initiation, be sure to take the left channel at the bottom. Taylor Cavin, Culley Thomas and Darin McQuoid. 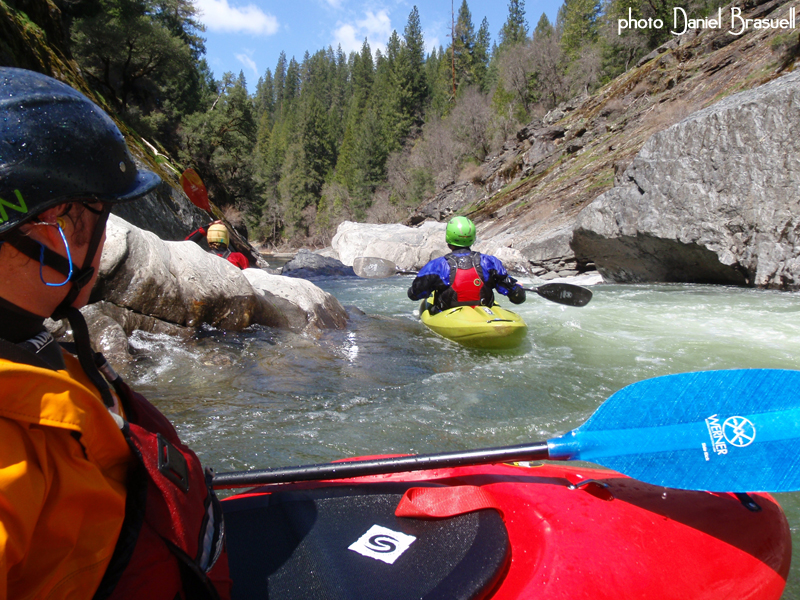 The first of the named rapids is "Drainpipe" which we all portaged at high flows, it looked absolutely terrible. Good fun at 500 though!

Daniel Brasuell runs the lead in to Drainpipe at 500cfs. 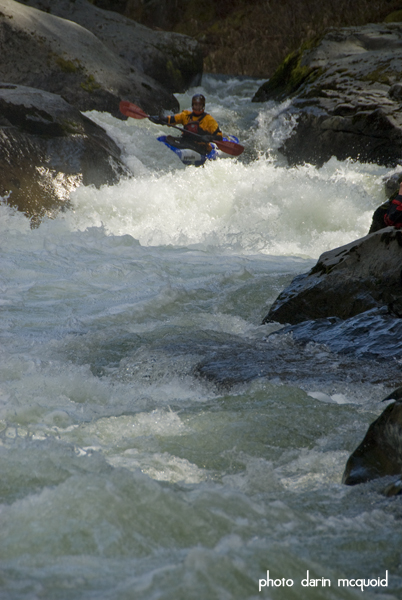 Daniel Brasuell making the crux move, this hole is backed up by a rock pile that looks a bit like a sieve. 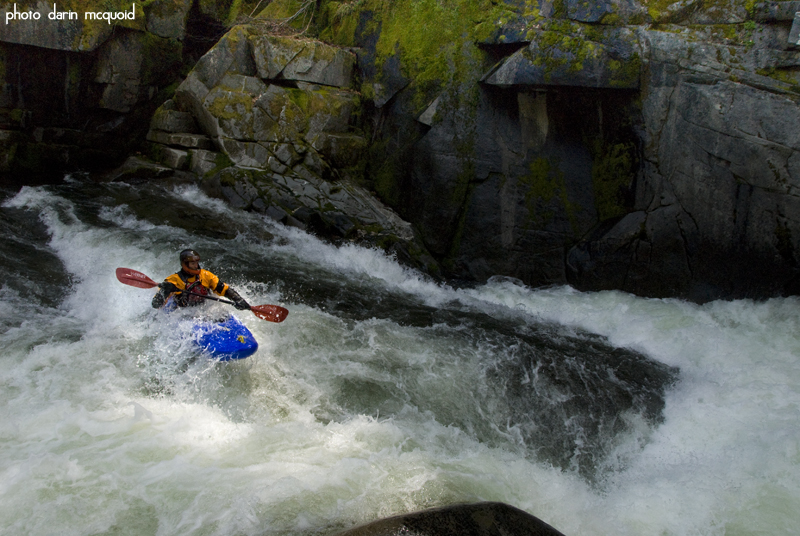 Thomas lines it up with flows around 900. 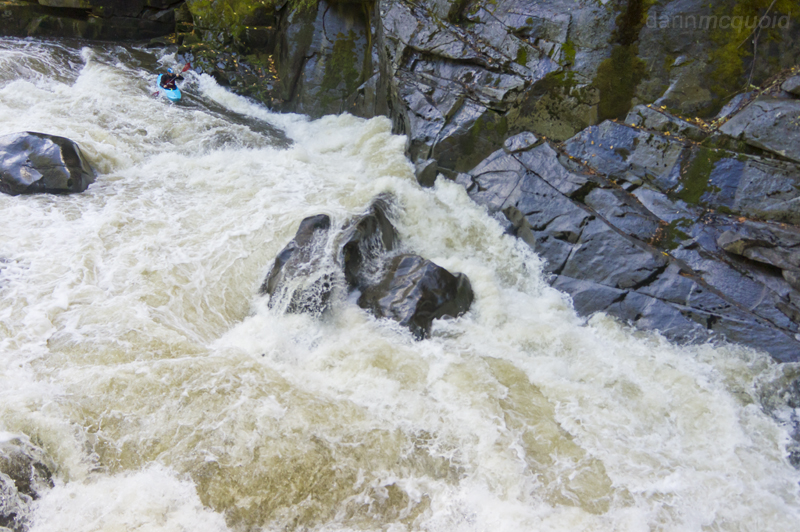 Looking back up on a nice spring day. 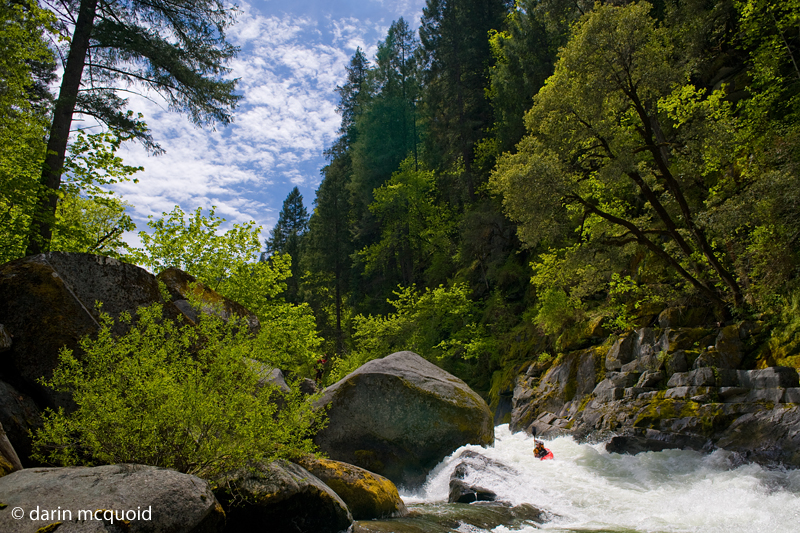 I was expecting a mellow class II-III lead-in for the first two miles, and was surprised by the quality and quantity of IV-V rapids in the first two miles, which prompted a few scouts and hand signals. Big water isn’t my forte, and I was pleased that my Jefe actually paddled better in big water with overnight gear in it. At the end of the warm up we came to a large rapid that had an ugly hole at the bottom, with large sieves on both sides. Ben quickly portaged up the cliff while I stood around debating between the difficulty of the rapid and portage. Jared liked it and gave'er right away.


Jared Johnson in the entrance to the first large rapid. [Ed note, this is actually "Straight Shot" 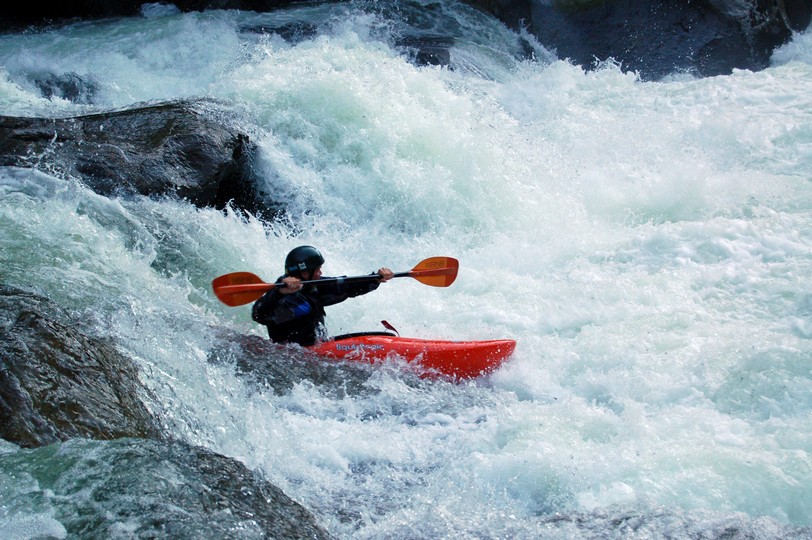 Style was the definition of how Jared Johnson nailed the line between the sieve and the edge of the hole. 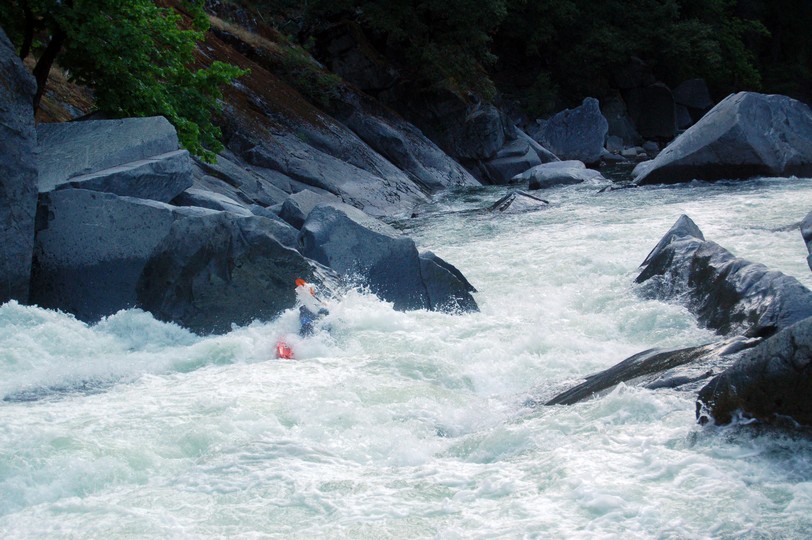 Much easier rapid at 500cfs, Taylor Cavin leads the charge. 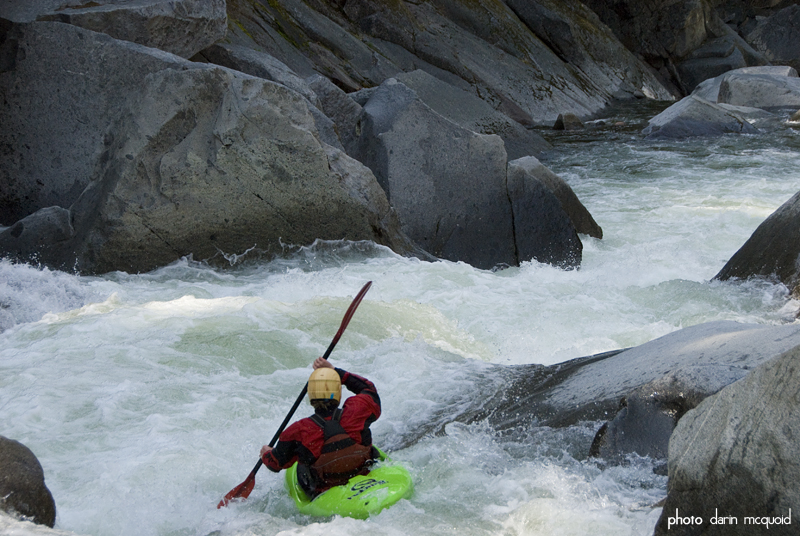 Lizzie and Gabe followed through shortly after, but I missed Lizzie’s run and caught the tail end of Gabe’s in my focus on the sketchy portage. Retrospectively I would probably run the rapid instead of portage up and down the cliff, but halfway up was too late. This drop really marked the beginning of the hard section, we scouted more and did one big portage around a long drop that had a huge hole feeding under a rock.
Gabe got out to scout a large river wide ledge drop while we waited in an eddy. The move was a ferry across to the right side, which had a nice tongue down it. Jared probed it first and hit a funky eddy hole thing in the ferry but managed it well and made it right, followed by a similar line from Ben. I didn’t like the eddy hole funky water thing, but didn’t want to get out of my boat to portage. I drove hard upstream on my ferry and turned around for the funky feature, thought I was riding it thought but right when I was getting past it I flipped. I remember thinking “boy I hope the hole isn’t too sticky” as I rolled up went into the center of the ledge hole backwards. Thankfully it wasn’t and I rolled up in the out wash and got an eddy, realizing I was more tired than I had previously thought. We all agreed to push on but take the next available campsite, although we had seen none in the boulder garden style of the river so far. Within a short amount of time all the boys had eddied out on river left and were scouting a drop while Lizzie took a small creeking line down the right bank. Lizzie gave us some hand signals that perplexed both Gabe and myself, is she signaling a sleeper rock or something? Ahh, the first and seemingly only flat spot on the run. 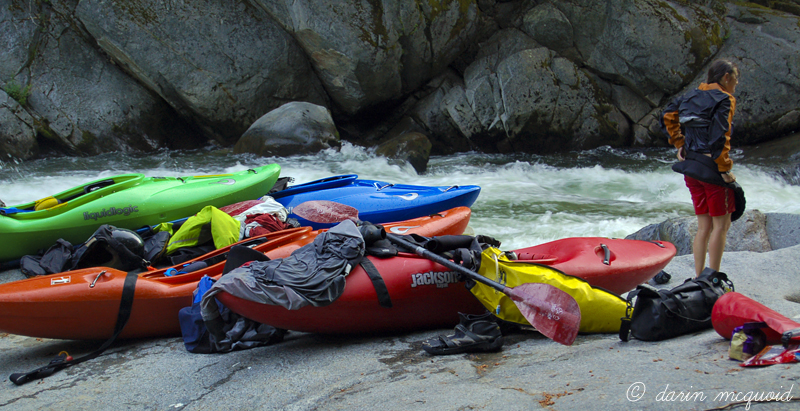 Our camping spot was a sweet bedrock slab with a small creek flowing right through it. Dusk sets in and we warm by the fire. 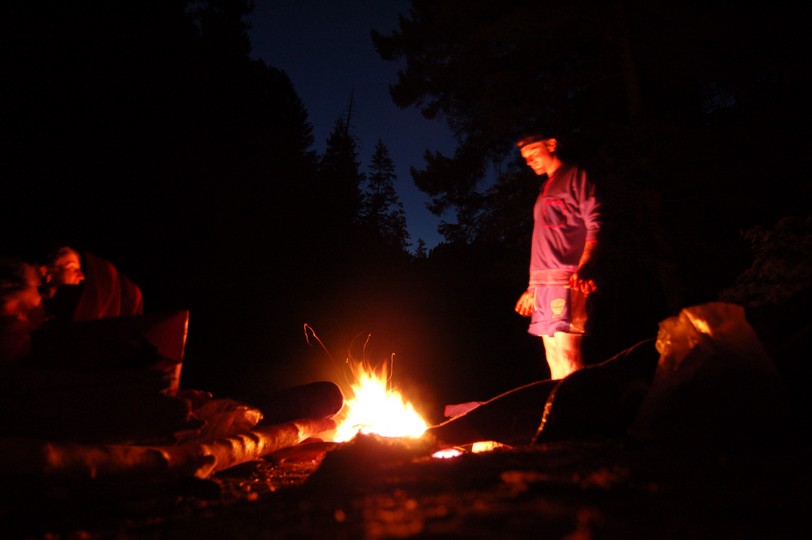 Glancing back upstream at the steepest section of Golden Gate. It's like this for a mile or two below Drainpipe. 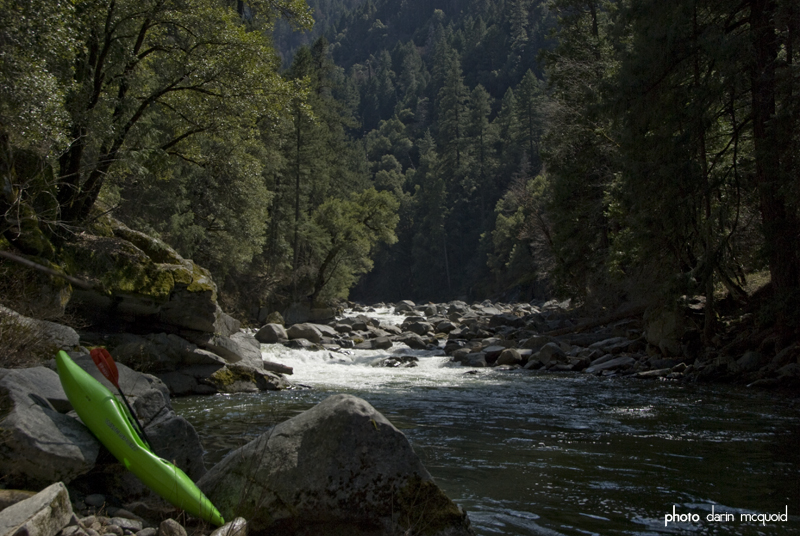 Sunday morning had beautiful California weather once again and we were slow to get up. 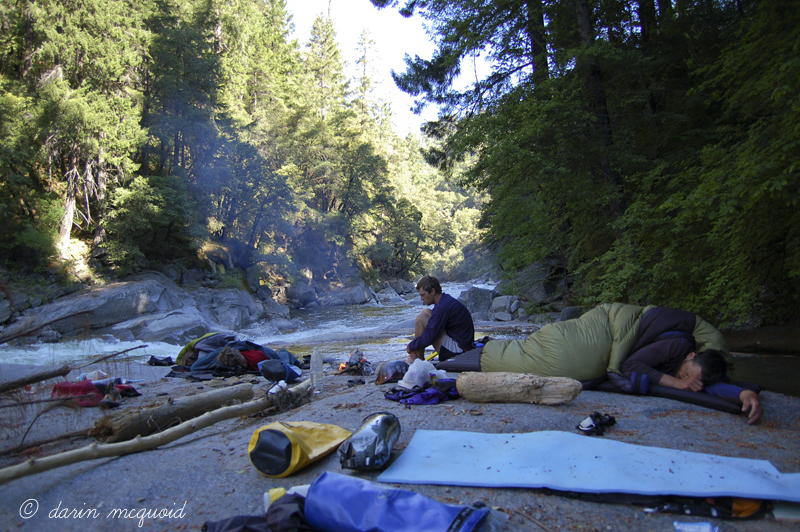 We got on the water around nine and were marginally refreshed, but stoked to be an estimated half way through the hard stuff. Taco Bell, an infamous rapid, came on pretty early in day two and we all portaged around the unfriendly looking beast. 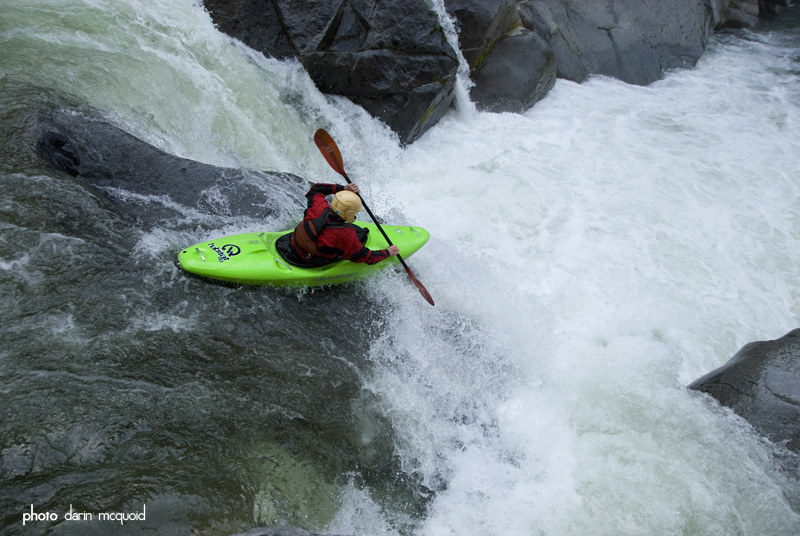 This drop came up after Taco Bell, I started portaging pretty quickly as I was far from fired up, but Jared was and ran the drop. 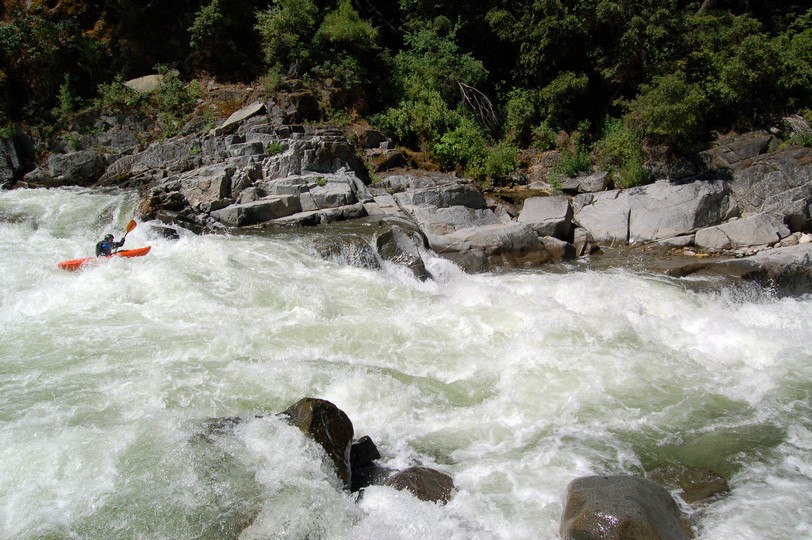 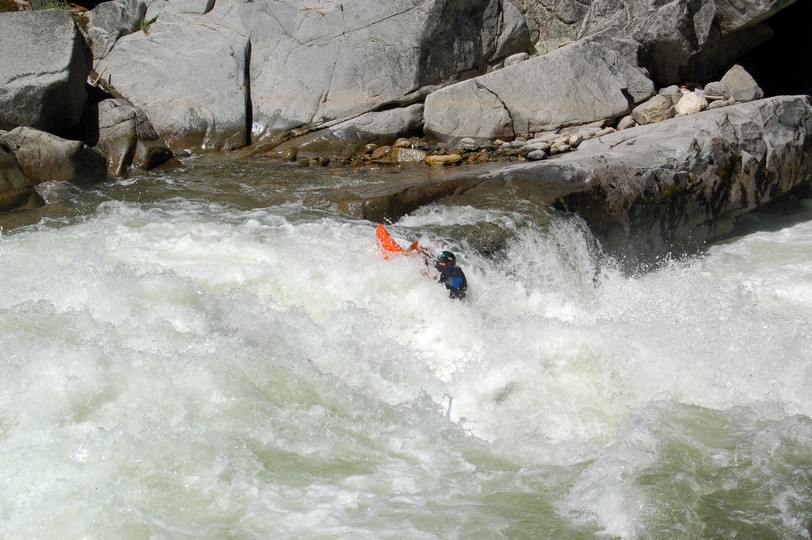 I imagine my line would have been similar, perhaps upside down in the final drop though.


Jared reunited with the portage crew. 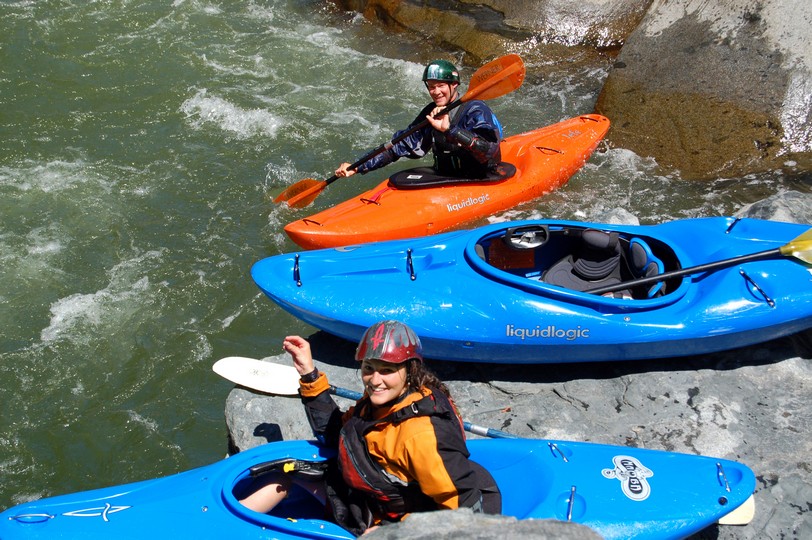 This whole section is really a four-mile boulder garden with some harder spots thrown in. We portaged once or twice at high water, but ran them all at 500.


This is the lead in to "Brainfade" 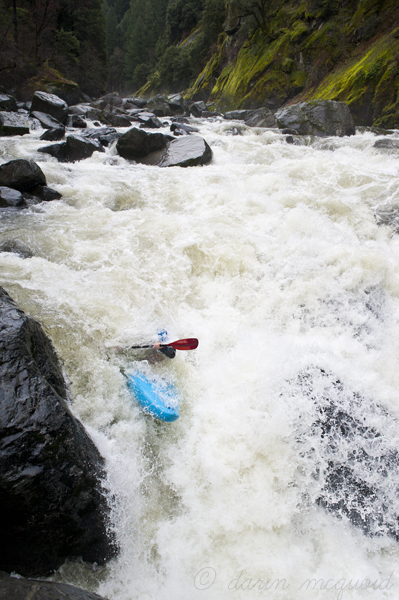 Jared led well with some superb boat scouting and we made good time to another sizable drop.


Lizzie probes well, avoiding the left side that had an interesting and unfriendly feature. "The Rose" 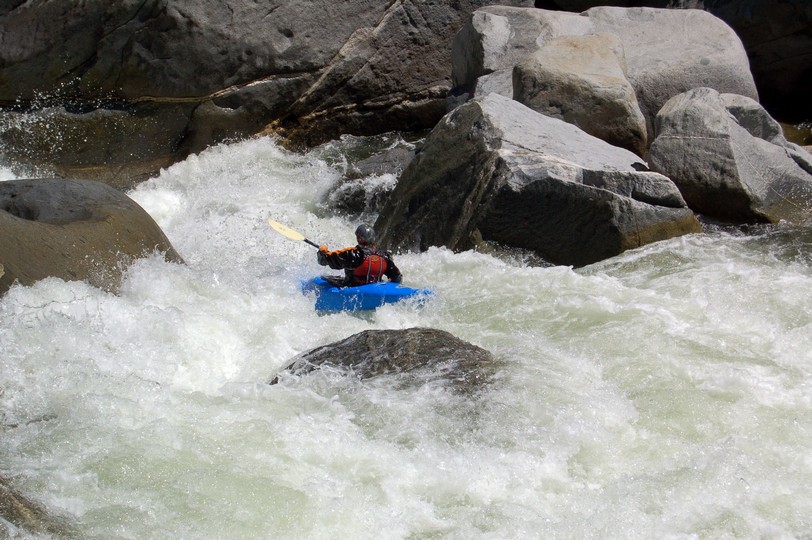 The Rose is a much more technical rapid at 500cfs. 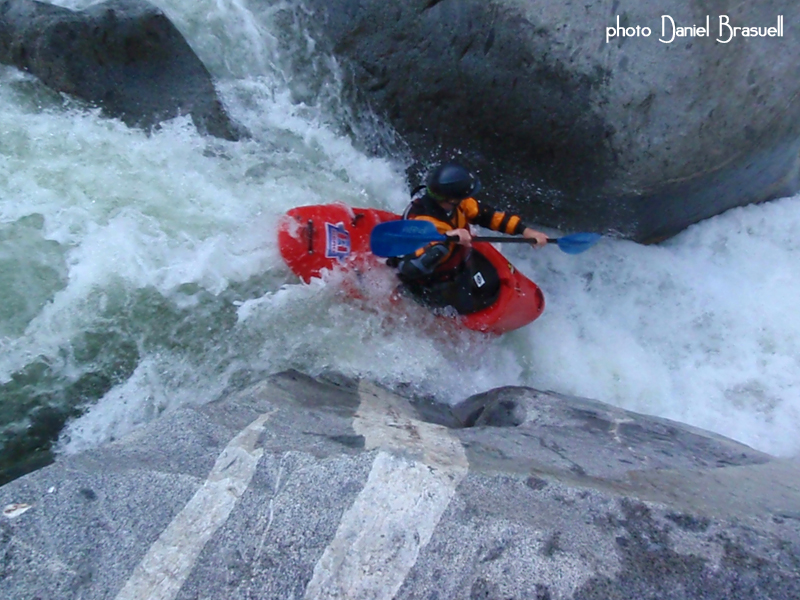 Gabe Forsythe ferries across to portage The Rose on the right, general character of the run in the background. 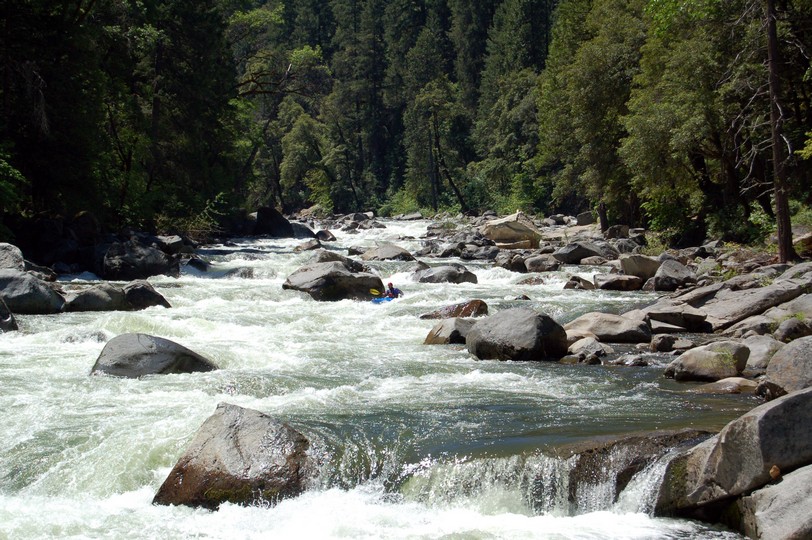 Read and run class V was the norm for another half mile or so before we eddied out to scout an enormous boulder garden. A quick scout revealed a sweet centerline that started off in low volume creeking style, fading into big water river running at the bottom. Gabe was fired up on this one and ran it while I was getting in my boat. I liked the rapid a lot and followed shortly after, video coming soon hopefully.

Ben Stookesberry in the creeking entrance with Jared Johnson looking on. 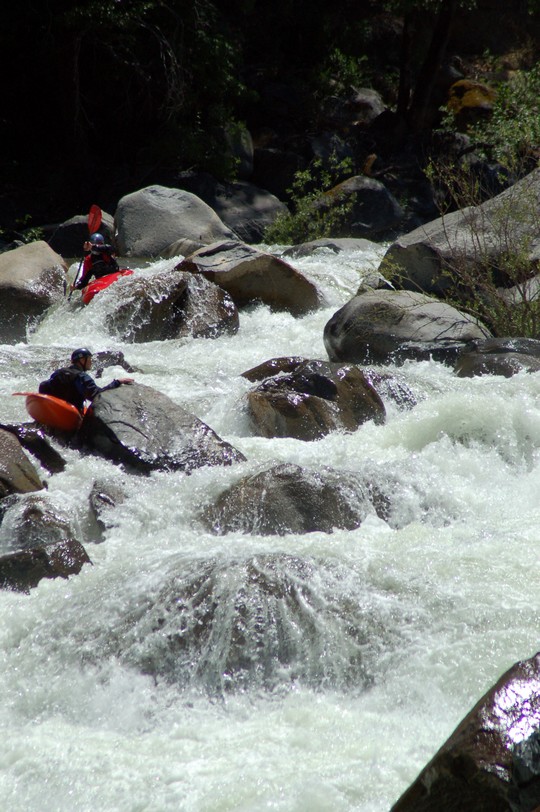 Jared Johnson dwarfed by my favorite rapid on the run. 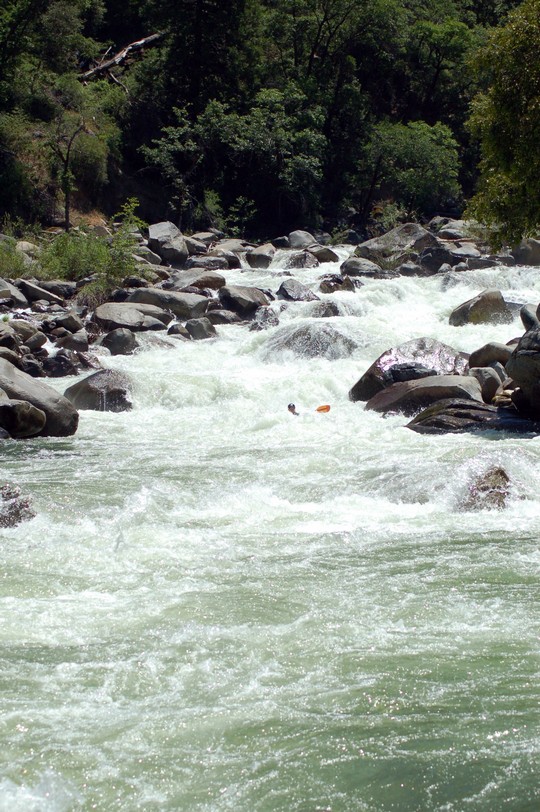 The above rapid is "All Fucked Up" at high flows. It really cleans up with more water. The lead in at 500cfs. Taylor Cavin and Darin McQuoid 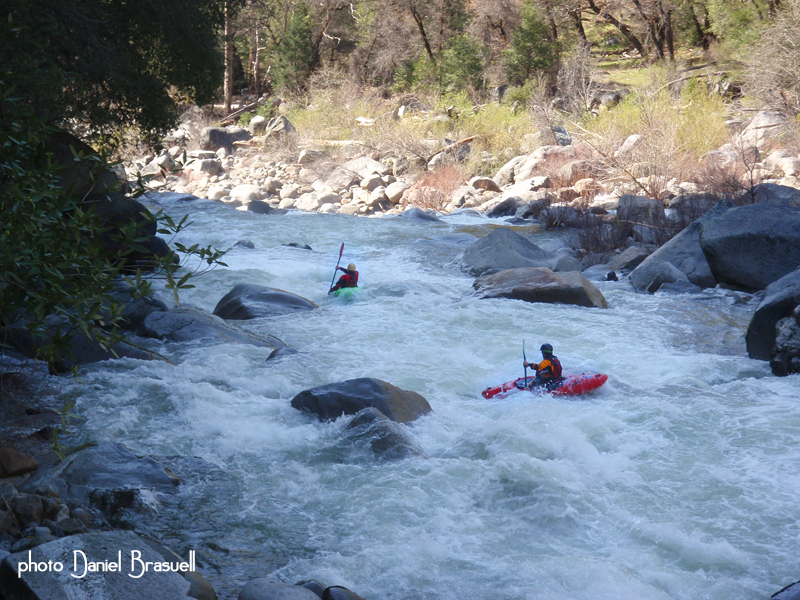 Chris Tully makes the key move, the key is avoiding a sieve on river left. 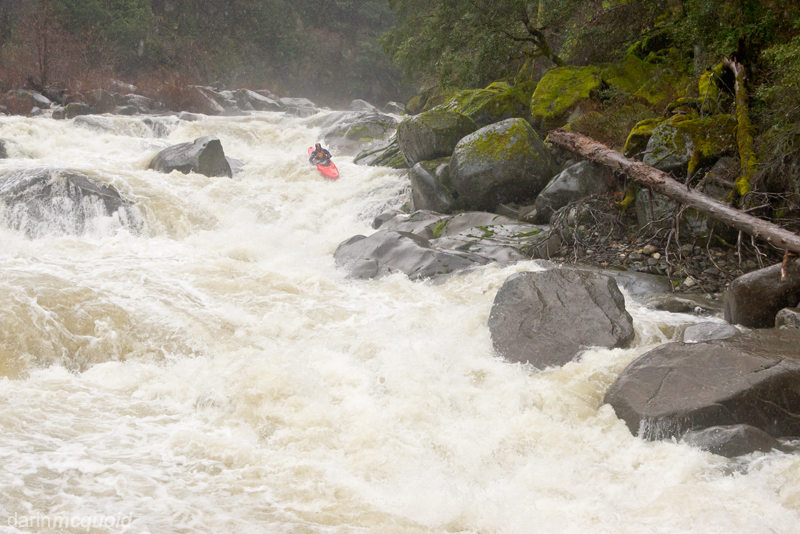 Ben took the lead from here on out and we made great time down to F111. We lunched here and contemplated F-111, I didn’t like the funky entrance nor the hungry pocket on the left side.


Lizzie was fired up and ran it though. 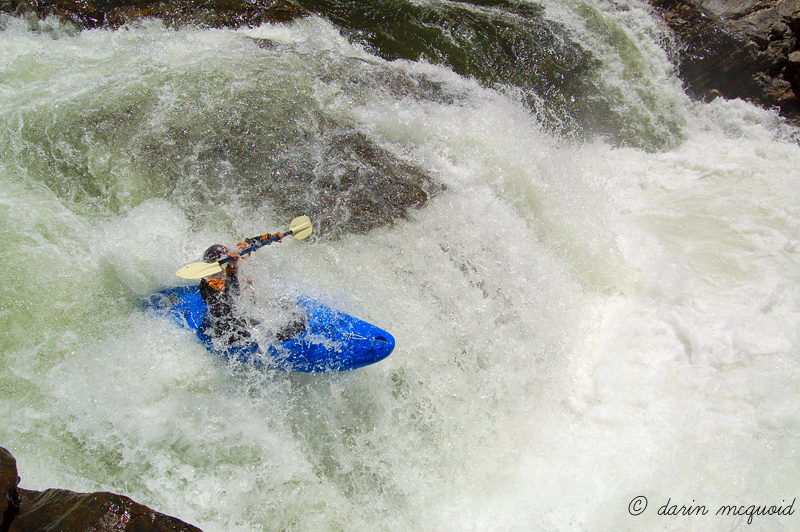 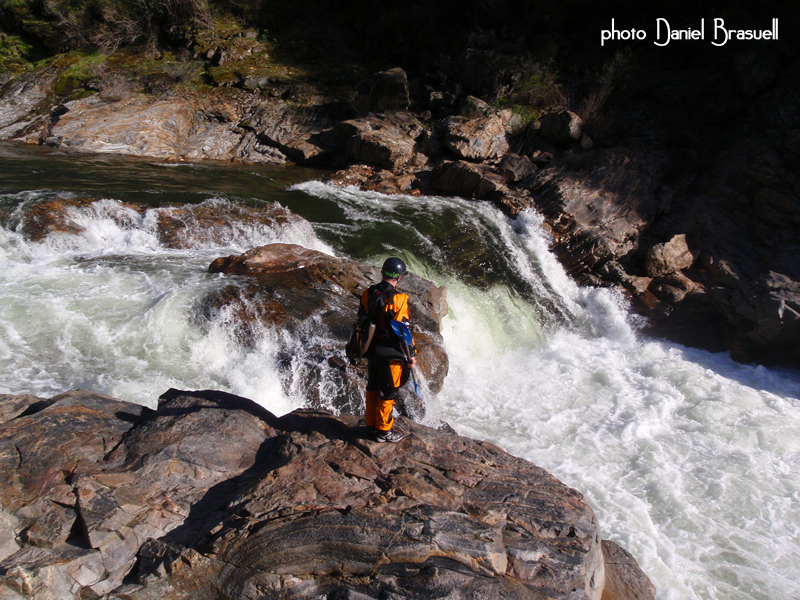 There was a brief moment of concern as the pocket started to pull her back, but she put the steam on and paddled out of it. After F-111 the river mellows back into IV-IV+ shifting from granite to a metamorphic canyon. We kayaked down to the take-out in blazing summer heat, glad to have done this worthwhile run. Our group had a minimum of two total portages, with individual portages as high as five.
All the V+ on this run can be portaged with relative ease, but that said a swim in any section could easily result in a lost boat. I’d imagine this run would be a blast to fly through with someone that knows all the lines. We spent a total of about four hours on the river, and I’d certainly do this run again.

Loading up after a great weekend of kayaking in the Sierras. 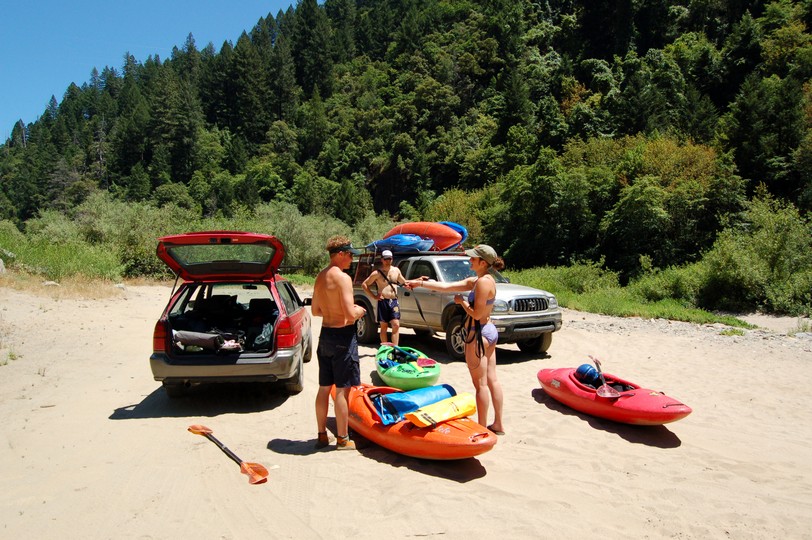 Directions and another write up from Daniel Brasuell.
Take-out: To reach take out go to Pollock Pines off of Highway 50, drive north from the freeway, turn left just past the Safeway. After a few blocks, turn right on Forebay road and following it 8 miles down to the river. On that road, you will go by a small lake and a cement road drops down to your left, stay right.

Put-in: To reach put in, go back to highway 50 and head east. Follow it a few miles to Peavine Ridge Road. Follow this road which turns to dirt down to the river. The road is poor quality, we got a Subaru down, but it wasn’t easy.