Devil’s Postpile is the hardest V+ multi-day trip in California. (If you count out the South Fork San Joaquin, which basically never has water) It is also the least run of the High Sierra multi-day expeditions. Although others have larger rapids, long hikes in, steeper gradient and more miles on the river, Devil’s Postpile has gorges.

The largest drainage in the Sierra Nevada’s, the Middle Fork San Joaquin starts from near Mammoth Ski Area and eventually flows into a myriad of dams on the western Sierra slope.

Mammoth local Kevin Smith was kind enough to go out of his way and check the flows at Rainbow Falls for us. His report of near perfect flows got Taylor Robertson and I on the phone for two days calling everyone trying to get a third member to join in for the mission with us. The few we made contact with backed out, and with large groups of paddlers already deep into low water missions Middle Kings and Upper Cherry Creek, we were starting to get worried. Thankfully a large group came out of Upper Cherry and we convinced them to drop in with us. In Sacramento we met up with Charlie Center, Rush Sturges, Scott Ligare, Ben Brown, Evan Garcia and Tyler Bradt.

11:00PM and trying to figure out the shuttle. 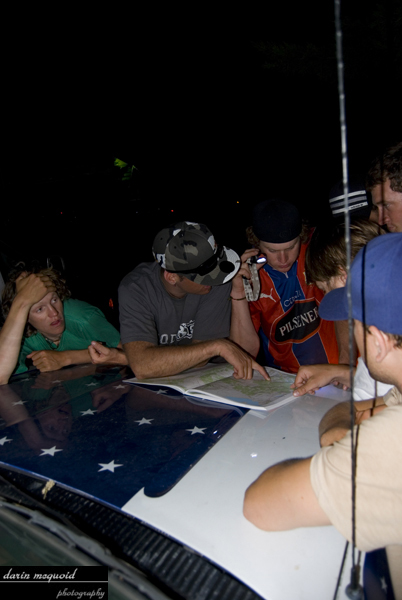 With a put-in on the Eastern Slope of the Sierras, and a take-out in the Western foothills, a six hour shuttle through Yosemite is necessary for kayaking the Middle Fork San Joaquin. Due to common issues in a shuttle of this magnitude we ended up with a down day in Mammoth and got directions to some great local hot springs.


The group enjoying a relaxing afternoon telling stories of debauchery. 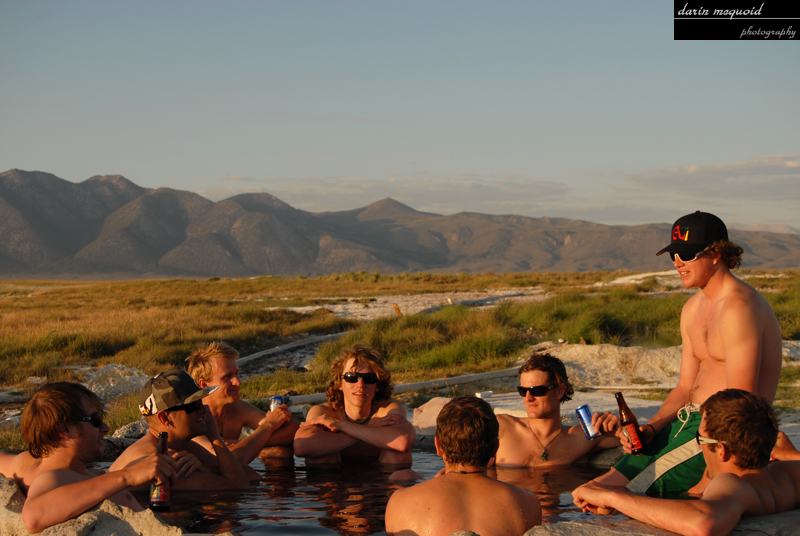 Thursday we also checked out the flows…we told our selves it was perfect, knowing perfectly well that it was a little high and rising. 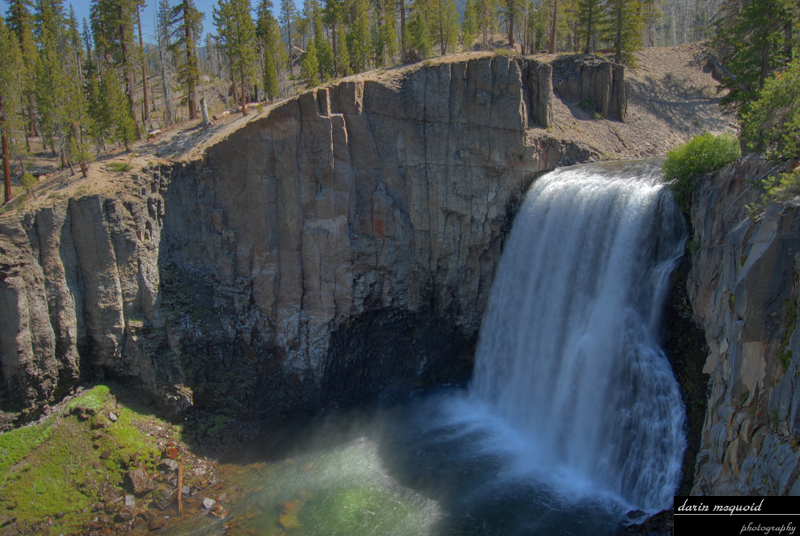 We woke up early Friday morning and headed straight to the river in full mission mode, intent on making downstream progress. Putting in below Rainbow Falls we found ample flows and quickly made our way down through class three drops and a log portage, eventually arriving at Lower Falls. To quote the Seven Rivers Expedition “They also said that the first rapid should look “not runnable or barely runnable” and that the river should be almost not float able. We were facing ample flow, easy to float on and the first rapid was “Awesome” We found the exact same thing, making us a little nervous about our flows, but optimism prevailed and we pushed downstream where we started the infamous portage on river right.


Shannon Carroll having an awesome time at Lower Rainbow Falls. 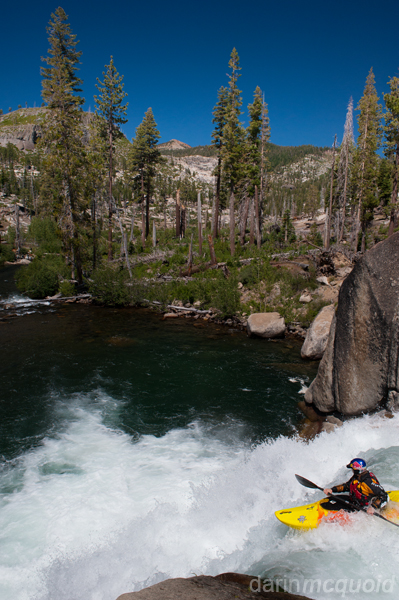 Scott, Tyler, Evan and Taylor take a break from bushwhacking through manzanita. 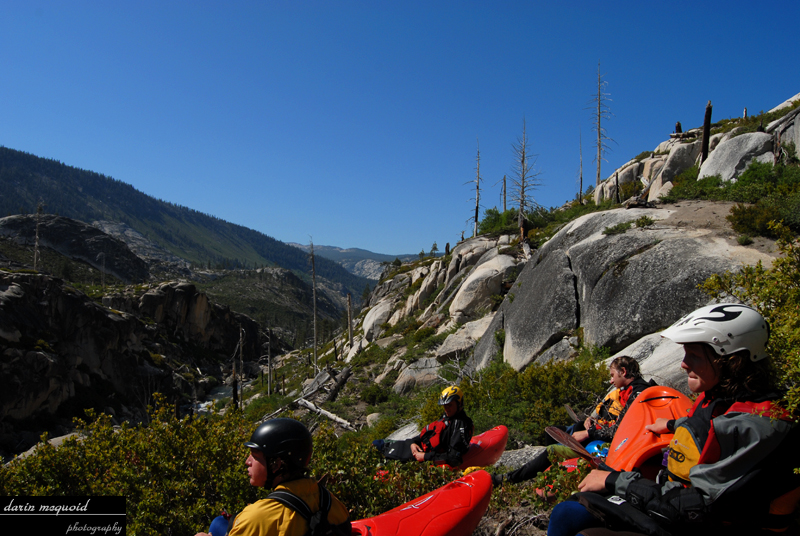 We portaged the first several miles on river right, occasionally dropping back down to pick off a rapid or two.


Tyler Bradt at the start of the good stuff in Devil’s Postpile. 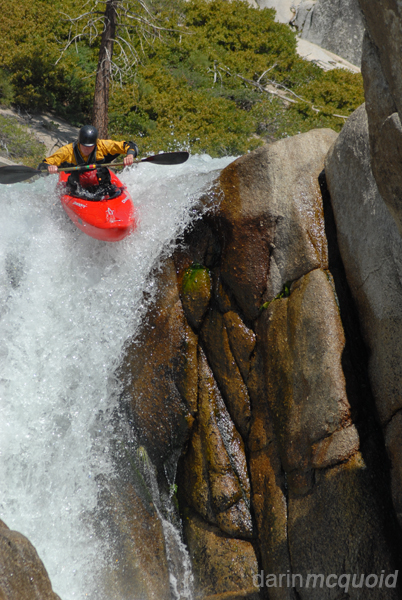 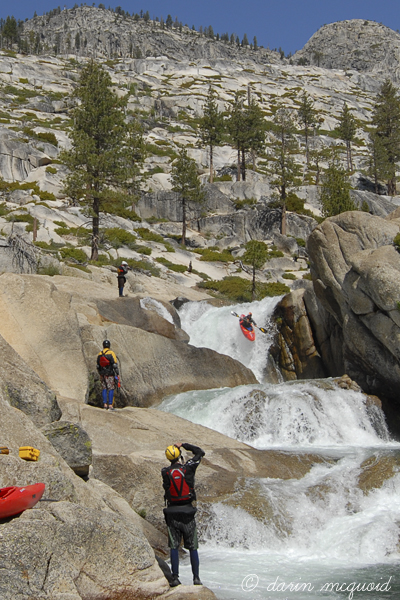 A true joy to run such a unique drop, Scott Ligare. 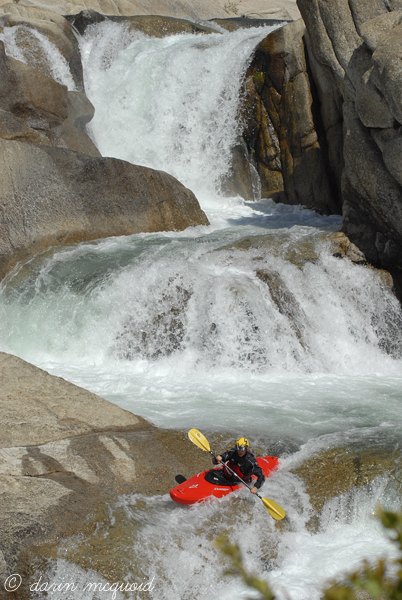 Taylor Robertson scouting downstream while we finished running the drop. Beware the rapid below the above pictured has caused serious pins. 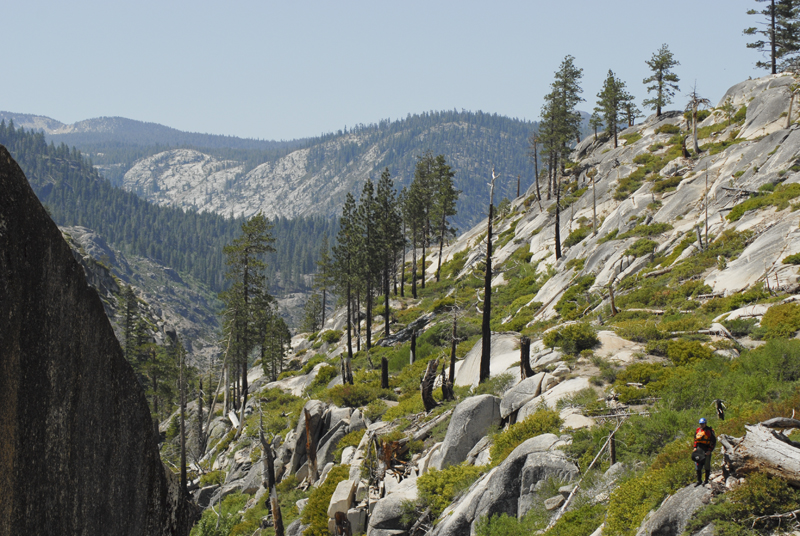 The scout revealed a small mini-gorge containing a rapid with a few boxed in holes that Charlie fired off while the rest of us walked.


Charlie Center punching a mean boxed in hole on the San Joaquin. 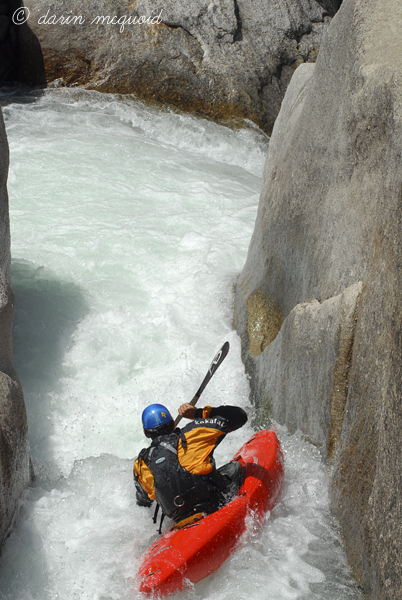 The portage on the right was resumed as the river sieved out for long distances. 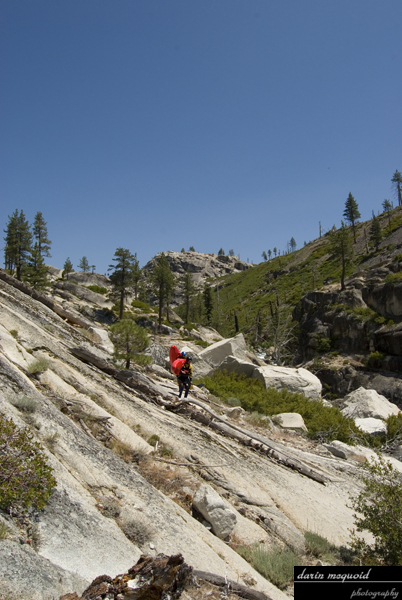 Five hours since putting on, mostly portaging and three or four rapids later, we arrived at a sweet slide and our first gorge.


Ben Brown enjoying the slide above the gorge. 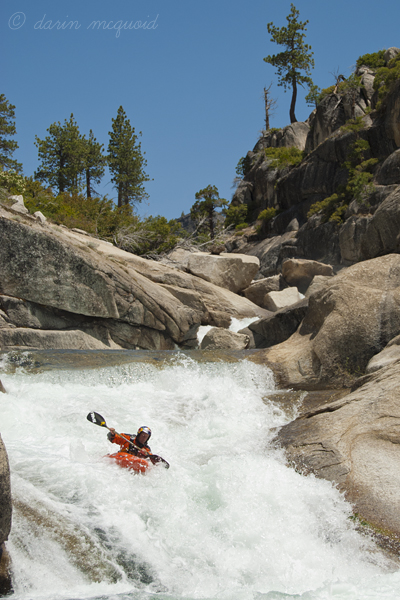 Taylor Robertson probing the rapid leading into the gorge. 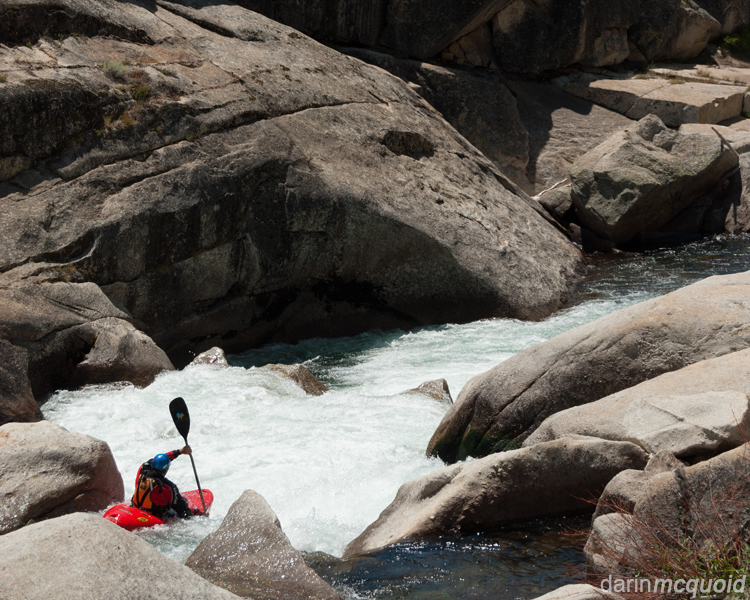 The mini-gorge was composed of three rapids, one was a long slide that Tommy ran in Seven Rivers and barely managed to escape the backwash of a pothole. We opted to portage the top on the left and seal launch in below the pothole but above the sweet slide. I sent Taylor and Charlie off from the seal launch with a small push, watched them style it and got my boat setup for the seal launch.

I was so excited about running the slide that I didn’t tell Evan to push me off from the seal launch. I dropped over the slab with just enough speed for my tail to catch. I gritted my teeth knowing this wasn’t going to be good as I went over vertical into the fast moving water above the slide. Resurfacing upside down I tried a quick roll and was immediately pushed into the rock dividing the flow at the top of the slide. I tried several more roll attempts while going around the rock and starting down the slide, thankfully getting my boat somewhat upright as I went over the first ledge and then went upside down again as I accelerated down the slide. Gaining speed I quickly rolled up on the shallow slide, right before going into a gigantic pillow, taking a big bounce off the rock behind the pillow and going upside down into the hole at the bottom. Thankfully it wasn’t sticky, and after going through upside down I quickly rolled up, spun around and finished the bottom drop of the slide. Amazingly I didn’t even scrape a knuckle or take a hit in the whole process, although it looks absolutely horrible on video. 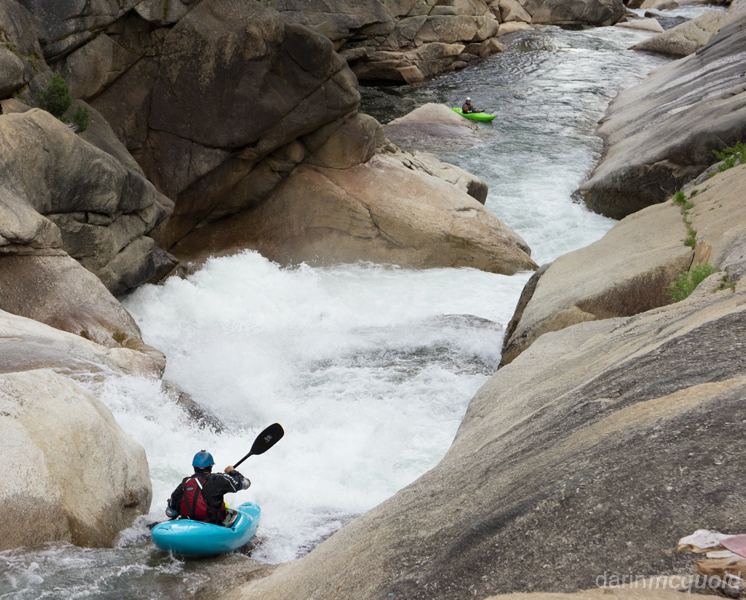 The rest of the group ran the slide with no problems, and we worked down through the next few drops to the lip of an innocuous looking rapid where Evan was eddied out making sure everyone went left. This little drop is known as “Clay Wright’s Drop” because on a descent several years ago he pinned in the middle of it. From the top it looks good down the middle, but contains an underwater sieve that Rush briefly pinned in but thankfully came through no worse for the wear. We stopped for lunch after this drop and knew we were making decent time, considering this is where Clay had pinned at the end of their second day. 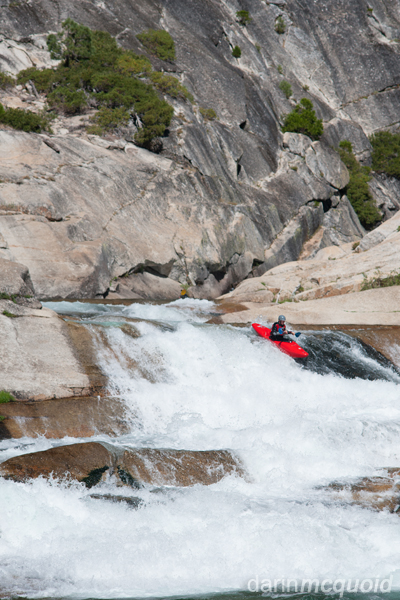 We enjoyed a nice long lunch and put back on to more sweet slides, one that was about two hundred yards long before ending in a great ten foot boof.


Kevin Smith and Thomas Moore enjoying some of the great read and run slides. 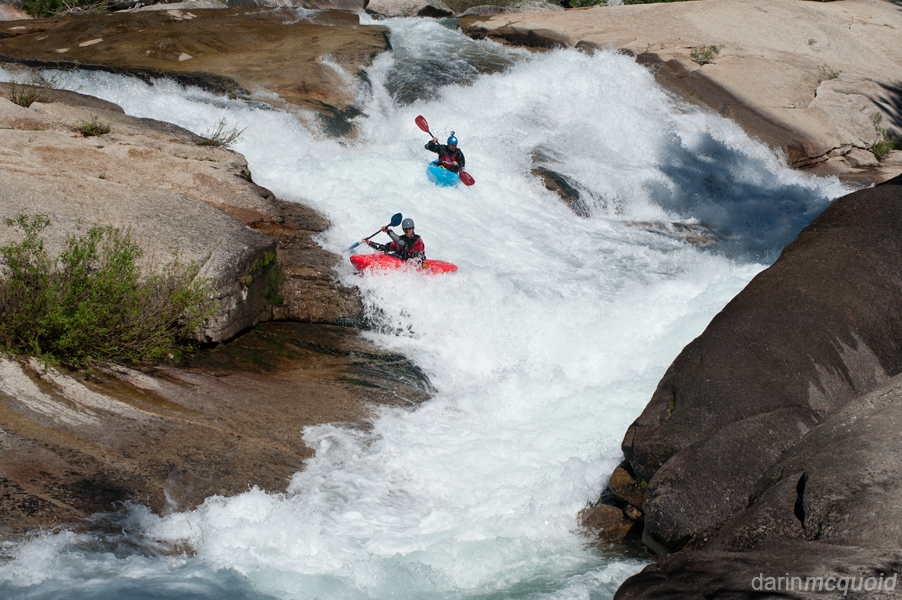 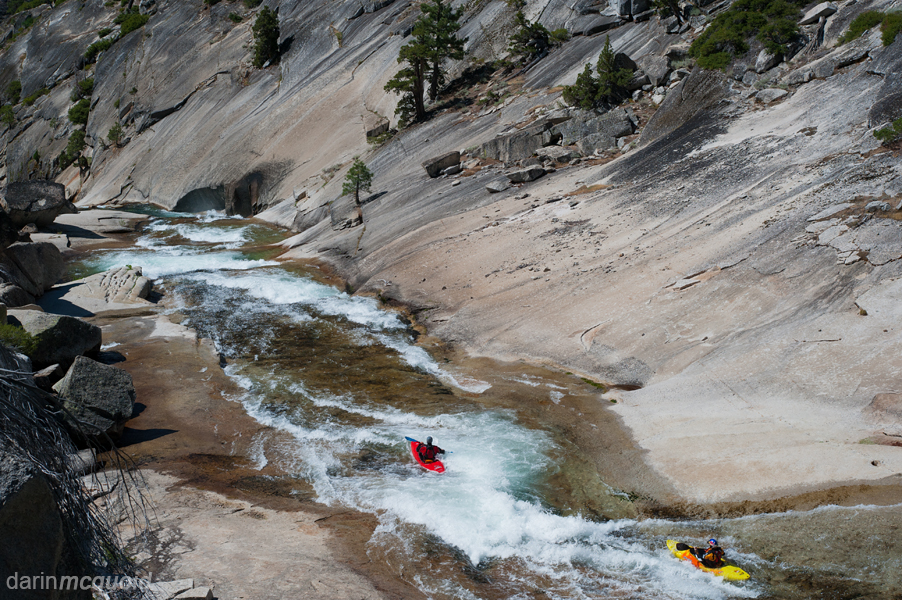 Here is looking back upstream at the boof.

Around the corner a tributary came in at the top of the second gorge.

Rush and Tyler look downstream into the deep gorge. 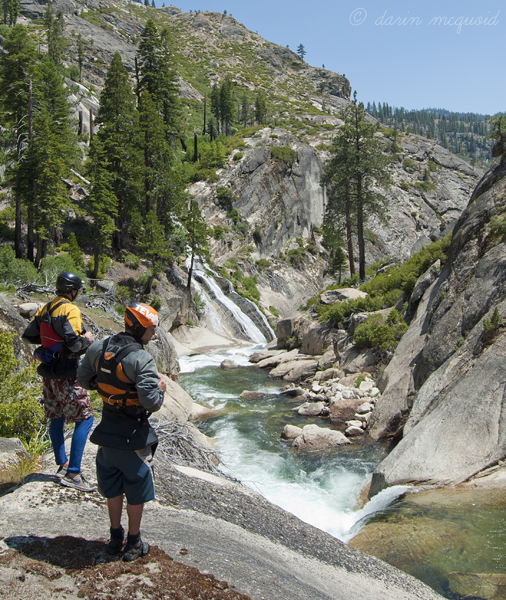 We tried scouting on the left and couldn’t get down far enough to see if it all went, so Charlie and Tyler ferried across and scouted down the right, coming back up with a big thumbs up. Going up a shelf on the right we portaged the entrance of the gorge and dropped into the walled out section knowing there were some big drops downstream.


Following years have proven that the rapid goes better than it looks, Kevin Smith enters. 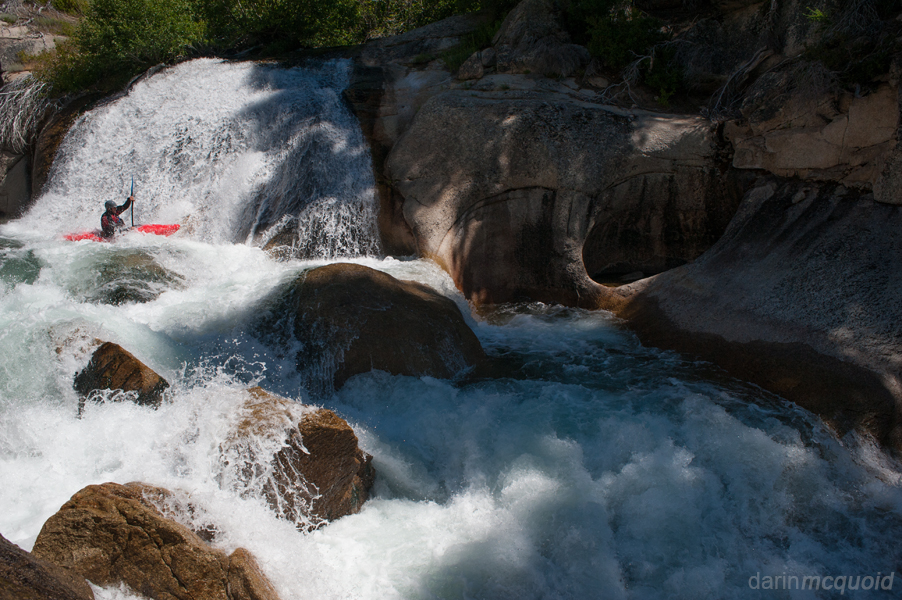 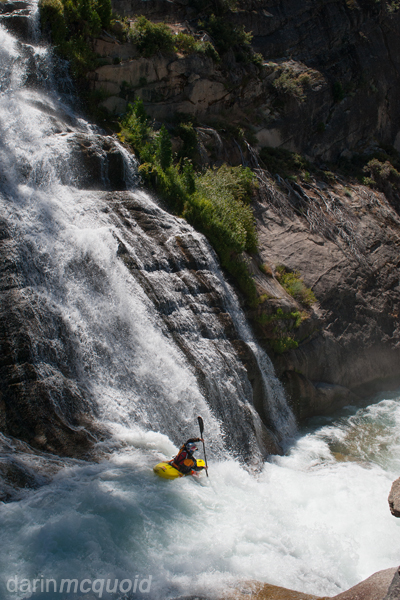 Downstream the locked into the gorge continues as we run though some incredible rapids including a sweet fifteen footer.

David Maurier in the majesty of it all. 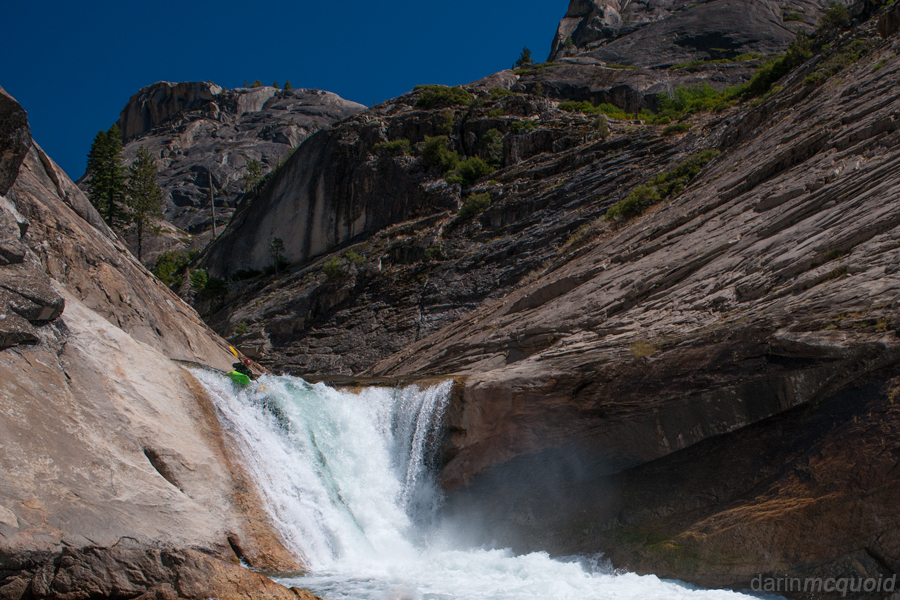 What followed is a long serious of tough and dangerous boulder gardens deep in a gorge, culminating with one of the best slides anywhere, “boof-o-matic” falls. 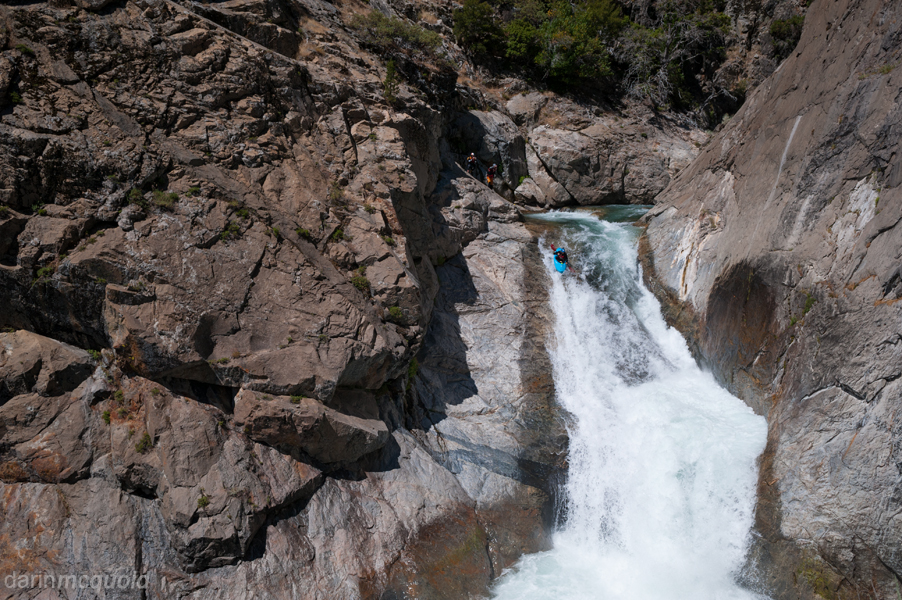 Almost completely walled in below boof-o-matic we saw a large horizon line that Charlie was able to scramble out and scout on the right. A three foot pour over led into a ten foot falls landing in a pothole with some questionable backwash. The boil was coming up as far as fifteen feet downstream. We were all both relieved and concerned when Taylor opted to probe the drop, Tay stern squirted at the bottom but was able to paddle out through the backwash. The rest of the group bombed down through the pour over holes with varying degrees of success but no real trouble. 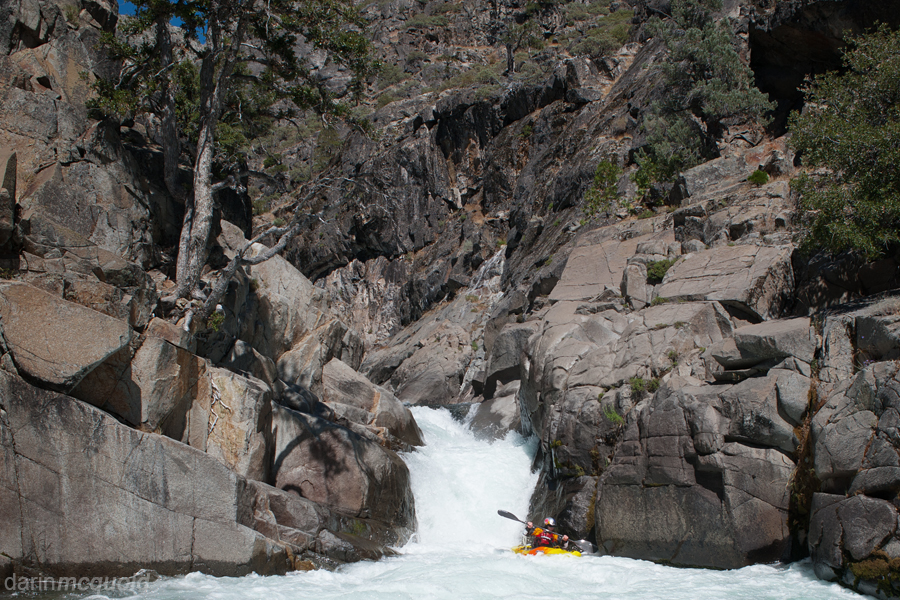 Rapids continued and the gorge opened up on the way down to the confluence with the North Fork San Joaquin, where we pushed on a little bit further until we found a nice campsite. Our map showed a large gorge shortly after the North Fork confluence, and our map ended after this gorge, leaving the rest of the run shrouded in mystery. We assumed the gorge down from our campsite was the infamous Crucible. We drifted off to sleep glad to have safely covered so much ground on day one, but knowing we would have a lot more to deal with in the next two days. 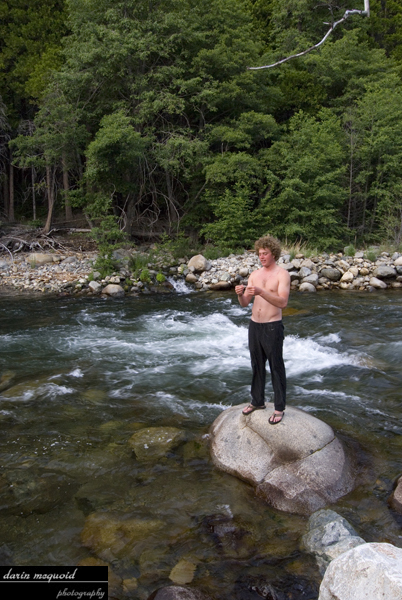