The New River of Northern California is an overlooked gem—nestled within the confines of the Trinity Alps Wilderness, the river flows southward through a rugged and remote area seldom visited by kayakers (or anyone for that matter). The town of Denny, situated along the banks of the New River, earned its reputation during the 1970’s when the National Guard was called in to remove the large number of miners illegally living on forest service lands in the area. The “mining wars” garnered Denny its reputation as a town barricaded by locals to keep the government out.

Such is the remoteness of the area—a quick glance around quickly reveals absolutely no resemblance to Huntington Beach or any number of clichéd California locales that come to mind when “Cali” is mentioned. Imagine instead, West Virginia, but with clean clear water, huge mountains, tons of camping and sunny springtime weather coinciding with perfect river levels. The high quality scenery, easy access, great camping and variety of unspoiled clean whitewater, combine to make this river a must visit for the springtime kayaker. 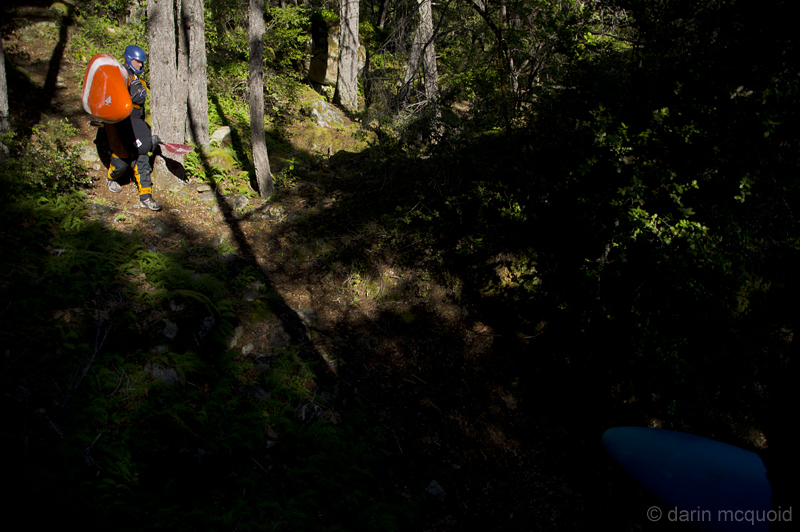 As for whitewater the New boasts three classic runs described in the Holbek and Stanley guidebook—the class IV+ upper, the class III-IV middle, and the class V gorge. What these guys failed to justly articulate however, is the incredibly high quality nature of the whitewater. An excellent approach to enjoying the New River drainage is to bring two groups of kayakers—those who wish to paddle the gorge, and those who do not. On day one, everybody can paddle together as a group…allowing the more confident boaters to keep an eye on and provide help while the less experienced manage the upper section. On day two, the gnarly boaters can attempt the gorge, while the remaining paddlers can run the middle section and then shuttle the extra car…leaving it at Hawkins bar with cold beers for the crew, and eliminating the headache of a long shuttle drive.


Clear cool waters of the New. 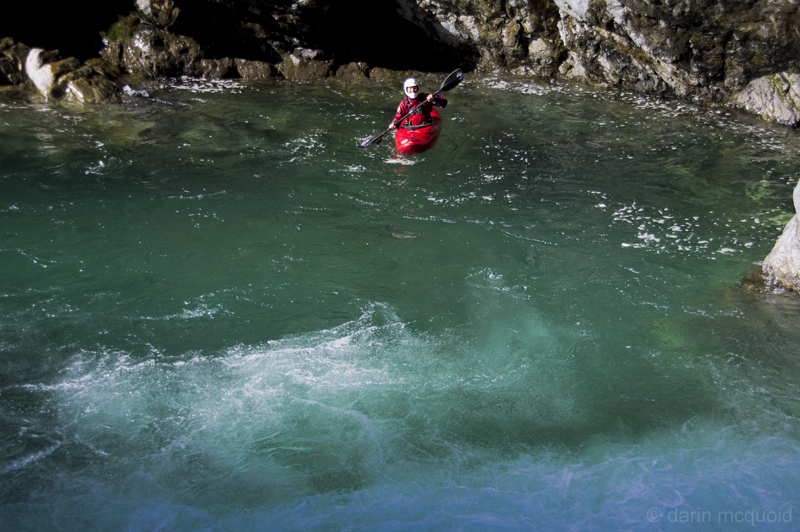 What lay within the confines of the New River Gorge? 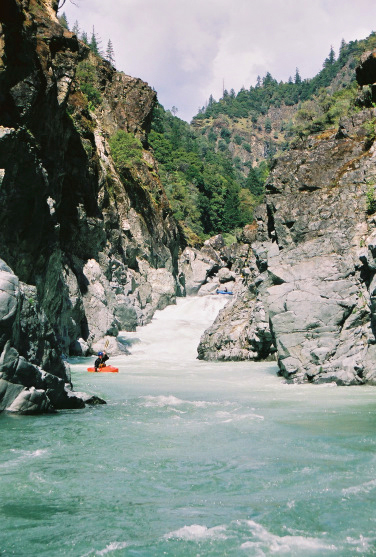 The G.N.R. (Gorge of the New River) is the perfect setting for one to find balance between the effort and composure required to negotiate this canyon by surrendering to its state. As you descend into this uncompromising gorge, composure and teamwork, as well as safety precautions, will be of utmost necessity. This section is also extremely sensitive to changes in flow, so don’t drop in if it is dumping rain, on the rise or muddy—it would be an intensely frightening sight at high flows. Likewise, at lower levels it can be attempted by solid class IV boaters with only a few short portages. The one exception is a committing rapid only marginally visible from above—a much better alternative than the “mountain-goat portage route” described in the California guidebook.


Daniel Brasuell navigates through a tight spot in the first significant rapid. 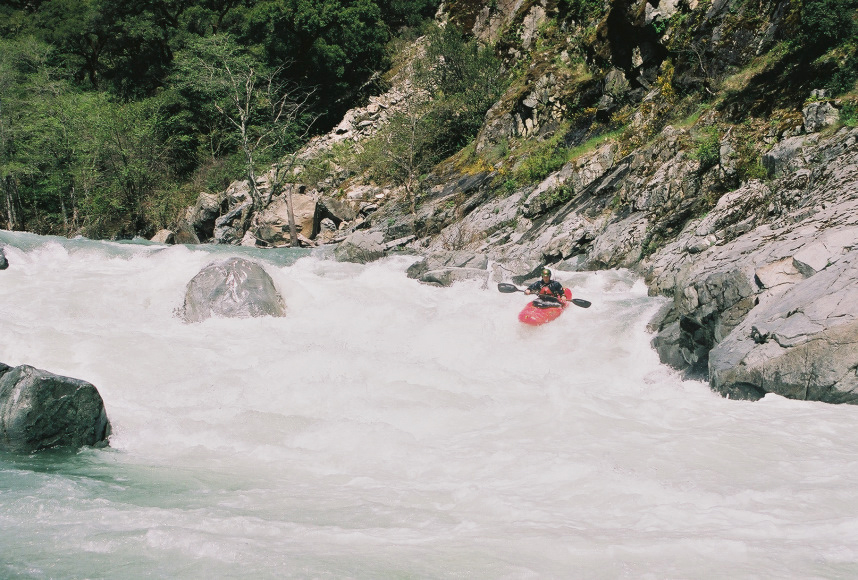 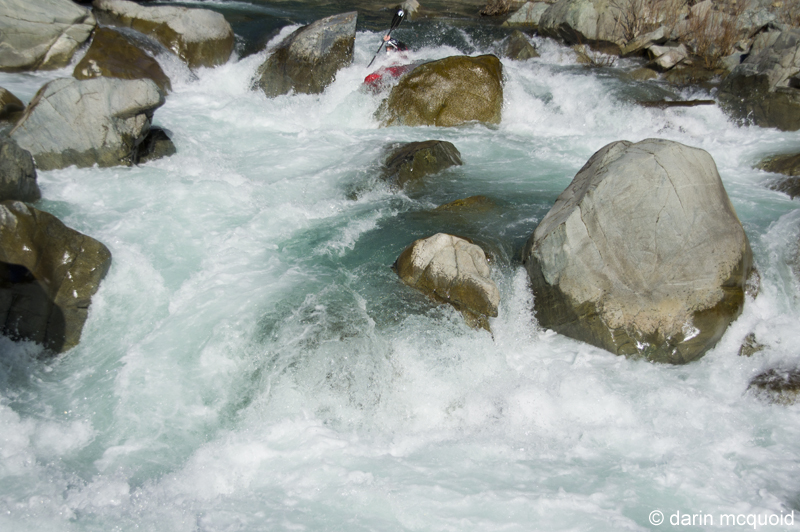 G.N.R. begins with several miles of placid water, allowing one to reflect on the increasing depth of the canyon walls all around, and marvel at evidence left behind by massive high-water events that have rumbled through here. The river passes below Ironside Mountain, 4,000 feet above, cutting through the same 165 million year old granite as the Trinity River in Burnt Ranch Gorge. The geology also exhibits metamorphic schist and gneiss rocks, which are polished smooth but form many undercuts and sieve formations. The formidable walls of the New River Gorge truly serve as a sanctuary for the abundant wildlife here. Sightings of large Trinity River Chinook and Steelhead are common, while Bears, Otters, Blue Heron and large birds of prey frequent this area as well. The amazingly diverse botany is equally awe-inspiring when springtime wildflowers combine with a variety of hardwoods and conifers to make a beautiful place even better.


Deep forested canyon marks the character of the New. 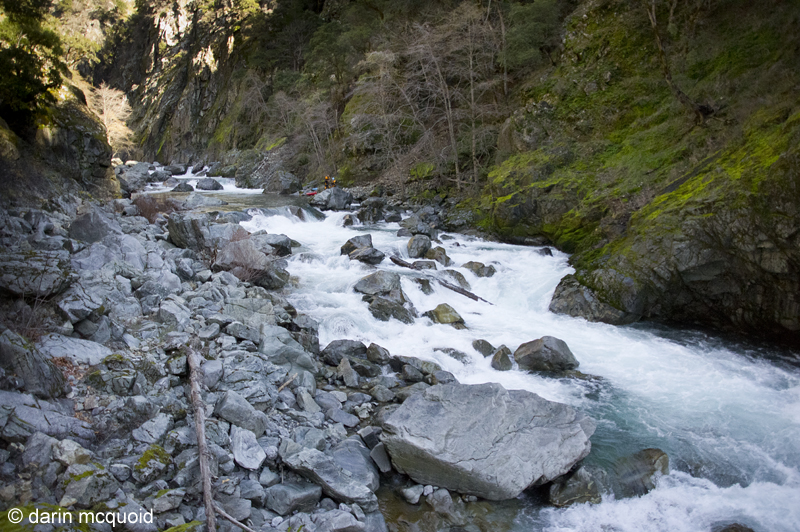 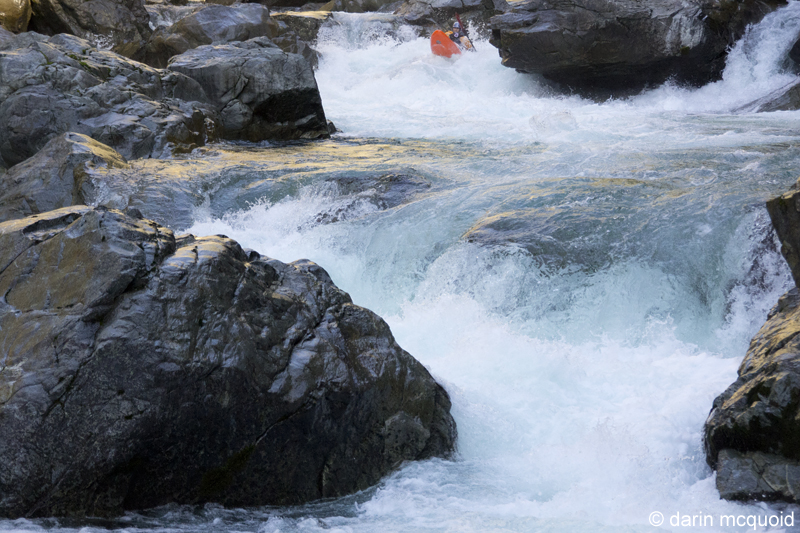 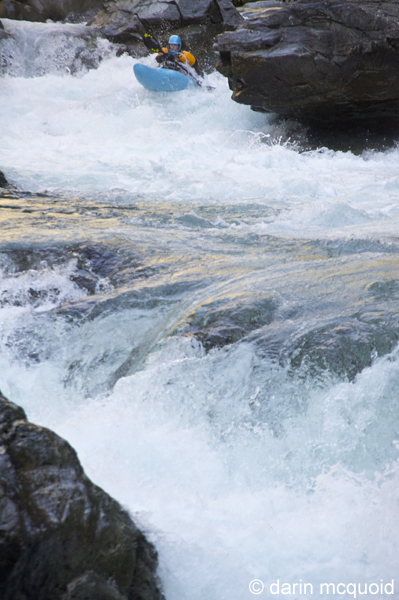 After the onset of rapids, you will either find yourself negotiating “creeky” rapids through boulder gardens or dodging large holes depending on the water level. High water can produce intensely powerful hydraulics due to the constriction of water through its narrow channel. There are several fun boulder gardens before you approach “Crack in the Rock”—the infamous “mountain goat portage”. 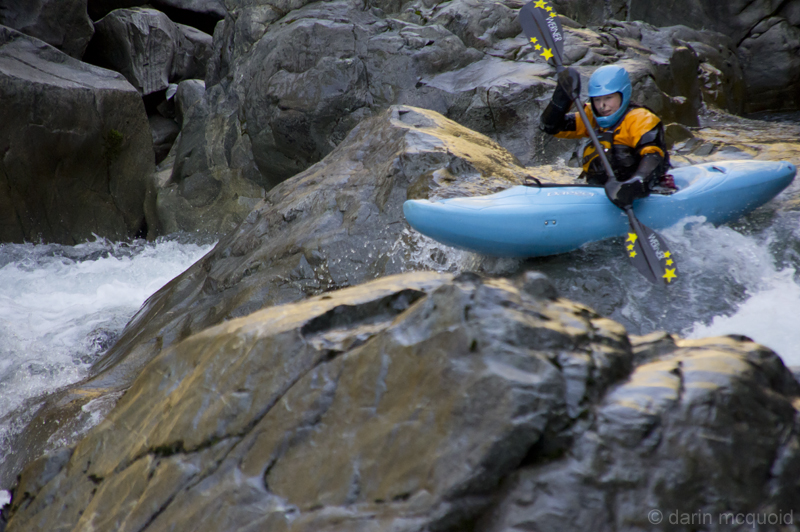 The mountain goat portage is not recommended after hearing reports from trusty sources stating, “It is a frightening and exposed portage that gave the run a bad name”, but now we know better: there is a disguised portage route. The portage goes through a large cleft between two enormous boulders, giving access to an extra section of rapids and sparing you the desperation of clawing at the mossy cliff for handholds. While you are here, take a moment to admire the rugged scenery; passage through this canyon is virtually impossible without use of a water craft.


David Ernst finishing up another good one. 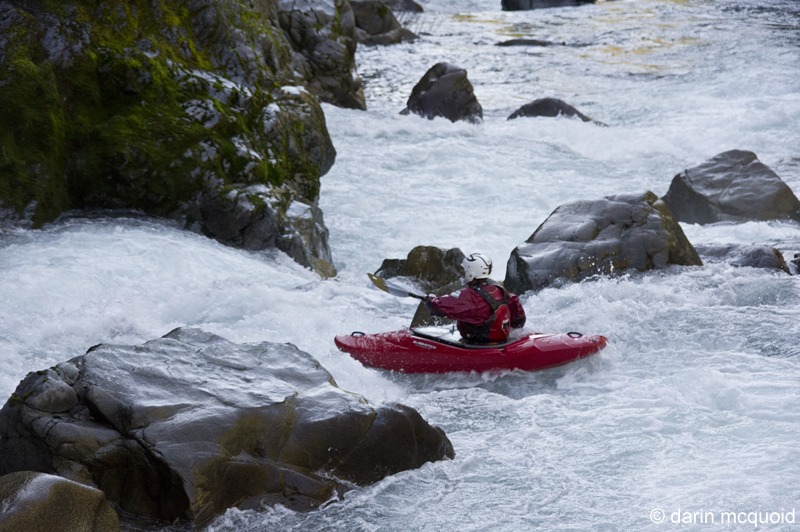 Daniel Brasuel in the same. 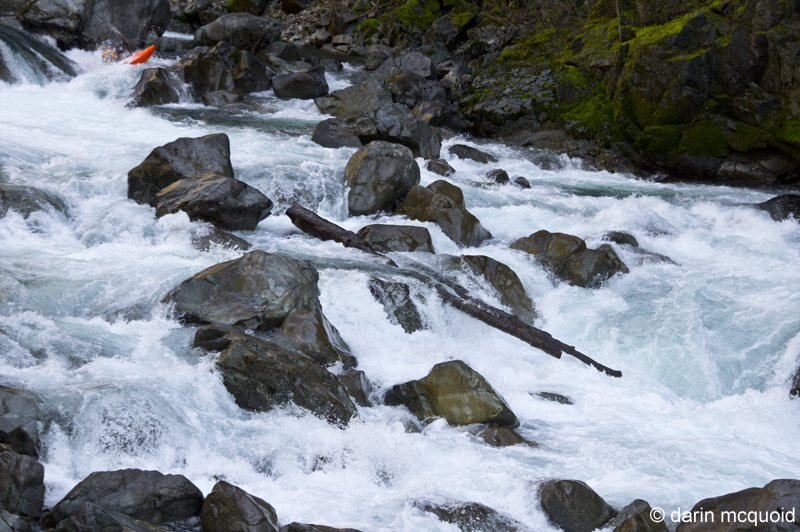 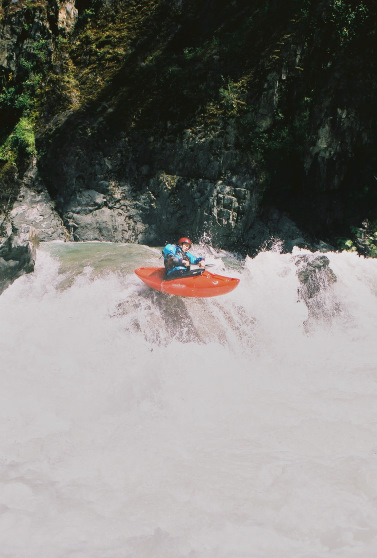 Crack in the Rock is a low-water disaster area of water slamming onto rock, but as the flow increases so too does the run-ability of this rapid. At high flows it is a hole punch leading into a large exploding ramp and weird hydraulic. Be sure to scout the exit because you are committed to running “Blind Faith”, the next drop, as well. The river left portage requires seal-launching into the froth emerging from this rapid, heaving you directly into the crux of the run. Standing above the seal-launching pad, you can peer down and vaguely catch a glimpse at the left side of “blind faith”. Run left, punching through two ledge holes stacked on top of one another. It’s really not that bad if you decide to portage “crack in the rock”, just don’t meander anywhere to the right where most of the river falls through an enormous sieve.

Shortly thereafter is the “Tombstone”, a significant drop containing an immense tombstone-like rock backing up an intimidating river-wide hole. Be careful, as violent thrashings have occurred here. The short portage along the rock-ledge on river left requires teamwork and leaves the last person delicately balancing to get into their boat. This rapid was recently bestowed with a large upturned log, blocking the river-left side of this rapid, and making the portage more difficult. [Log gone in 2011] 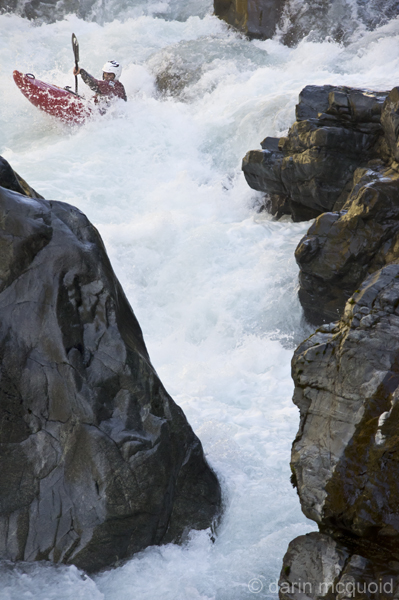 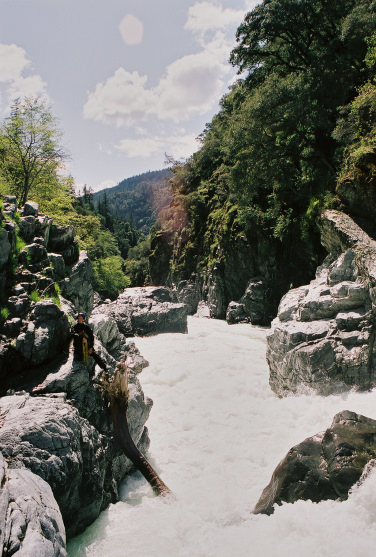 Looking up at Tombstone in bad lighting. 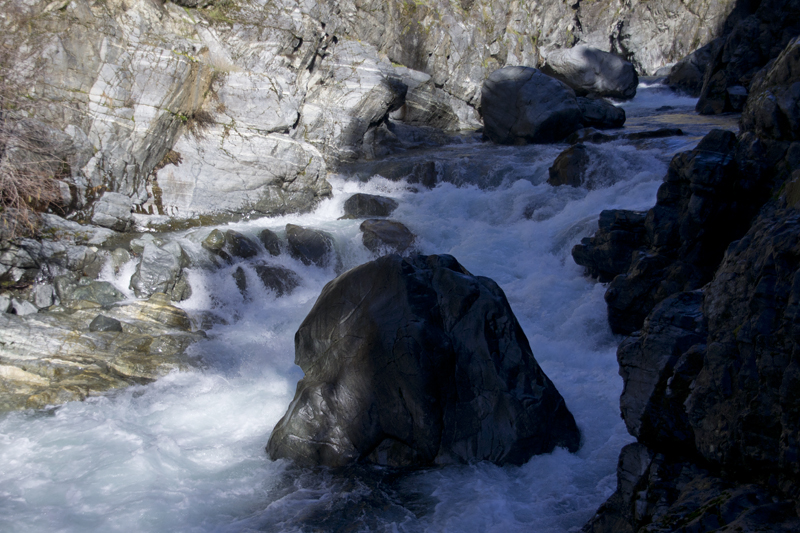 Looking down the New River Gorge from below Tombstone.

Below Tombstone, “Final Falls” still awaits—at most flows it is a terrific boof on the right hand side which always leaves you stoked. 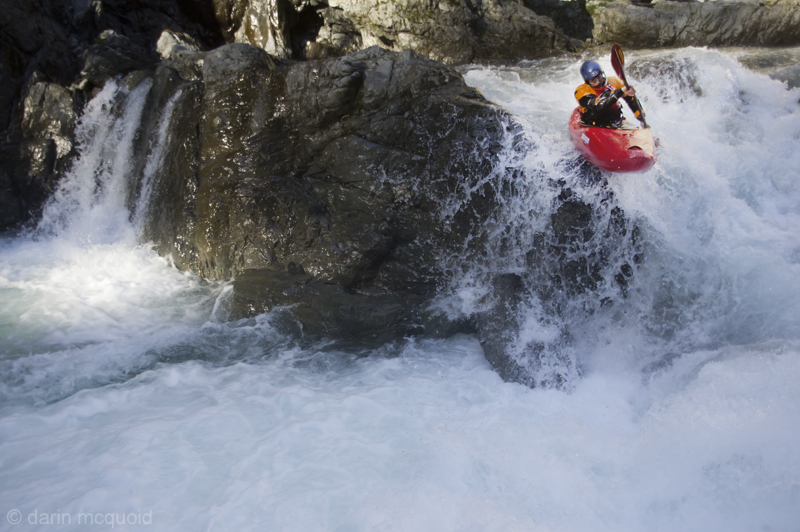 The pool immediately below this rapid serves as a holding ground for many salmon that are unable to ascend this drop until fall storms raise the water level. The final section to the confluence with the Trinity River is class IV read and run, with one innocuous hole lurking against the right-hand wall waiting to spank unwary boaters. When the New is flowing, Burnt Ranch will have abundant flows, resulting in a juicy paddle-out through the final rapid: Greys Falls.


Words of warning: logs and rapids are constantly changing in this area, and you may encounter a committing situation—remember: rescue from the gorge is extremely difficult. Start early, take your time scouting the rapids, and go with a group of paddlers who are confident with their river safety skills. It is an intimidating place that offers a sense of solitude unmatched by many other classic rivers. Hopefully your shuttle will be set, as it can be a long and dark huddle waiting for your buddies to retrieve the car. Good Luck, Have Fun.
Springtime offers a good window of opportunity for this run: late March to early April can be a period of snow melt—in big water years it can flow into summertime.