North Fork of the Kaweah River "Upper" IV-V
One of the best things about paddling with more than one group of people, is that you end up paddling on a variety of whitewater. Daniel Brasuell is on a mission to paddle seemingly every piece of water in the state of California. So when he arranged some time off work and planned for some paddling in the North Coast area, I knew we'd get on some new stuff.

As the time came, the water did not, and it was obvious that if we headed North we'd be very limited in our options. Looking over dreamflows it was obvious; Kaweah time.

The Kaweah watershed has become one of my favorites over the last few years. It has one of, if not the shortest drop from the headwaters to the valley floor, gorgeous scenery, warm weather and some classic California kayaking. One of the best things about the river is that you can arrive in the afternoon after driving, and still paddle the Hospital Rock section, which leaves one feeling like you accomplished a full day on the water, because in a few miles it has more good rapids than the state of Colorado.

Enjoying the warm sunshine at take-out, we were dismayed to see three small cracks in Daniel's boat. They were long expected, but bad news at the beginning of a week long trip. The good news is that they were just three, one-inch long horizontal cracks under the seat. Nothing worth going home for at least!

All my previous trips to the Kaweah had a V-V+ focus, but when Daniel suggested the Upper North Fork of the Kaweah I was sold, having seen some good looking stuff online a few years before. 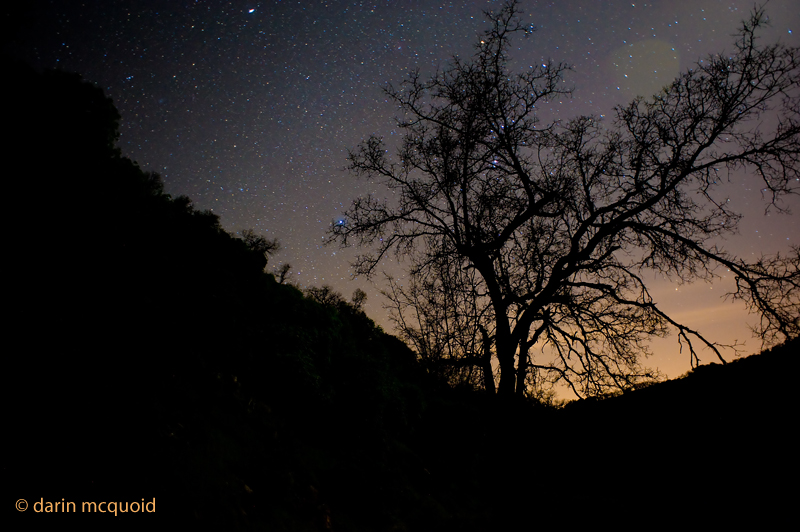 The North Fork Drive is a long, windy road with lots of potholes, but it was okay for "Scrat" my Toyota Previa. On the way up we stopped at the bridge to check the gauge, which was just over 1' at the lowest point of the daily cycle. I ran out of steam on the drive up and we made camp at a nice side creek, unbeknown to us just five minutes from the trail-head. 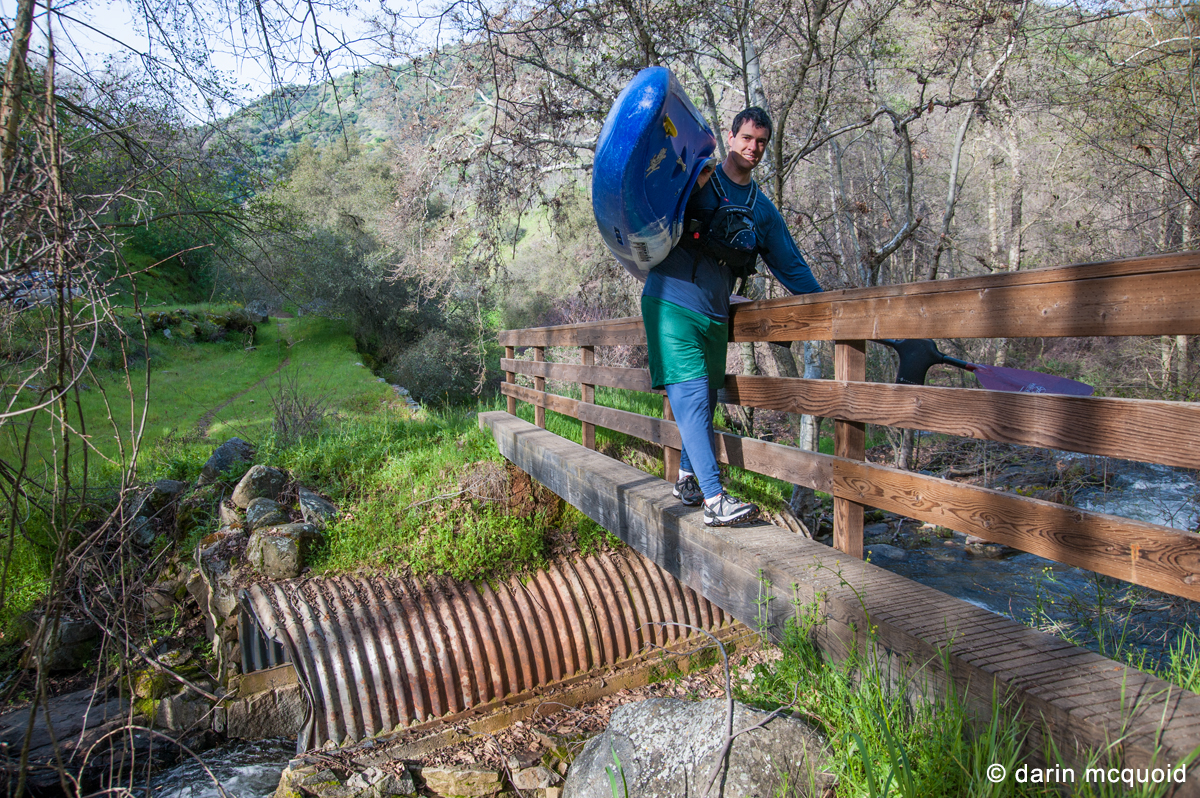 The Upper North Fork Kaweah requires no shuttle, but a considerable amount of hiking, around four miles. Like other sources report, the hiking is in general quite easy after the first mile of well graded climbing. The entire hike is on an overgrown road, and for the majority of it we enjoyed dragging our boats over grass while relishing abounding bouquets of wildflowers. 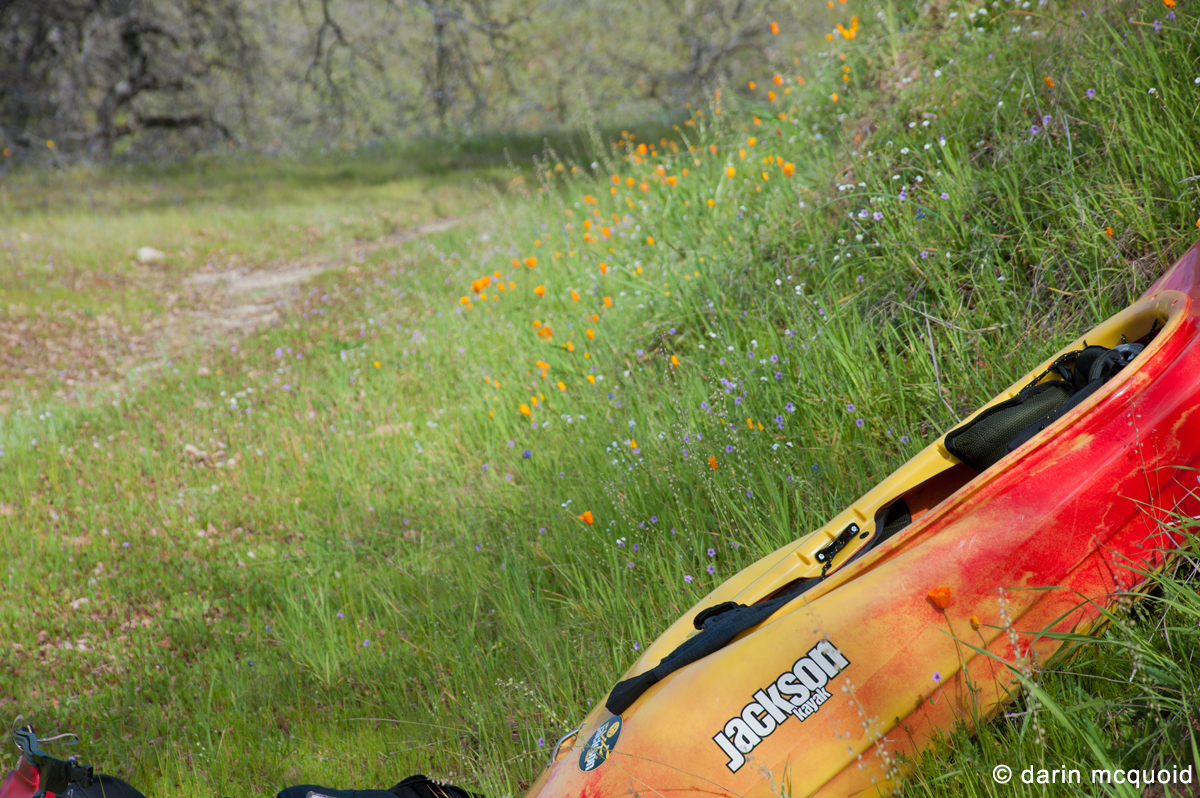 On the hike we couldn't help but mention how glad we were to be hiking this early in the season, as later in the year it's over 100f. 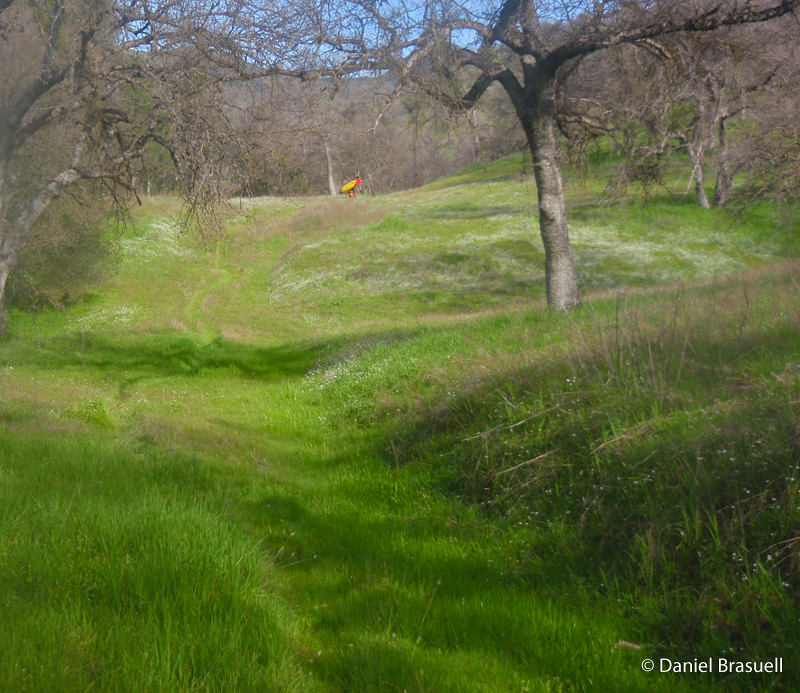 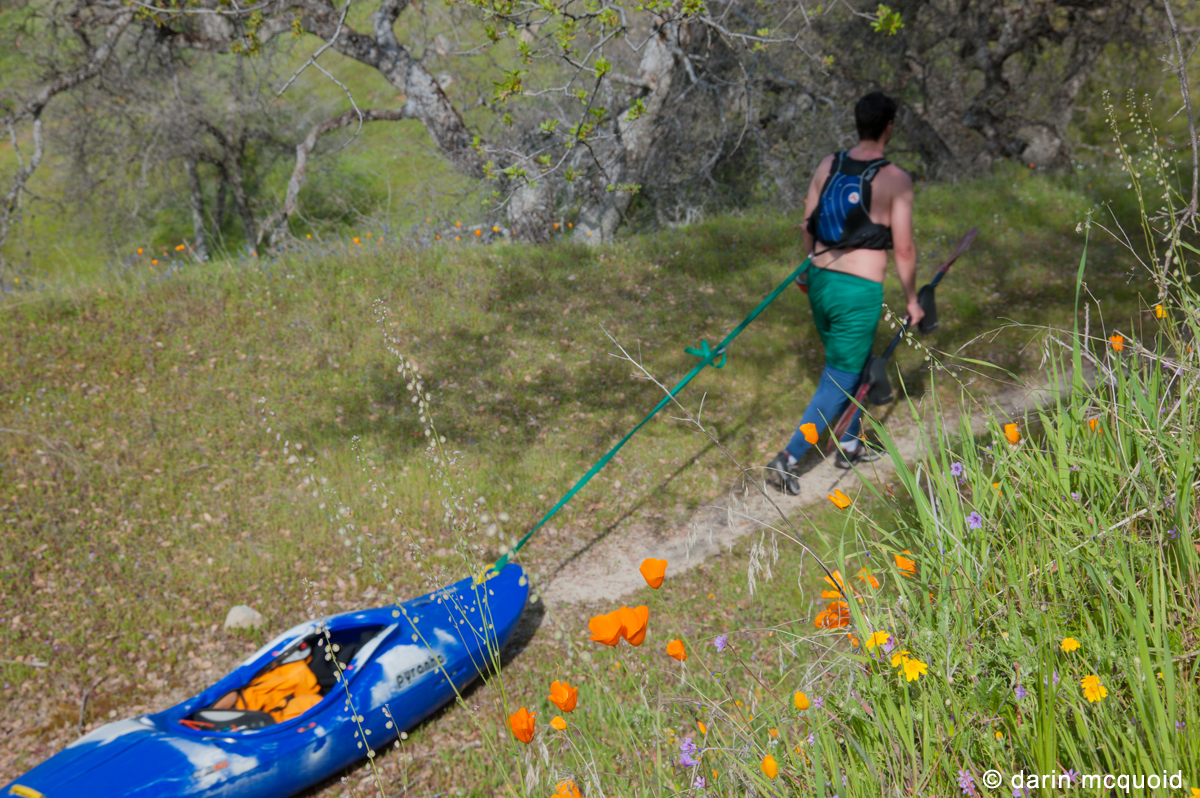 Typical low-sierra scenery, except the tall kayaker of course, although they may become a more common sight on the North Fork Kaweah. 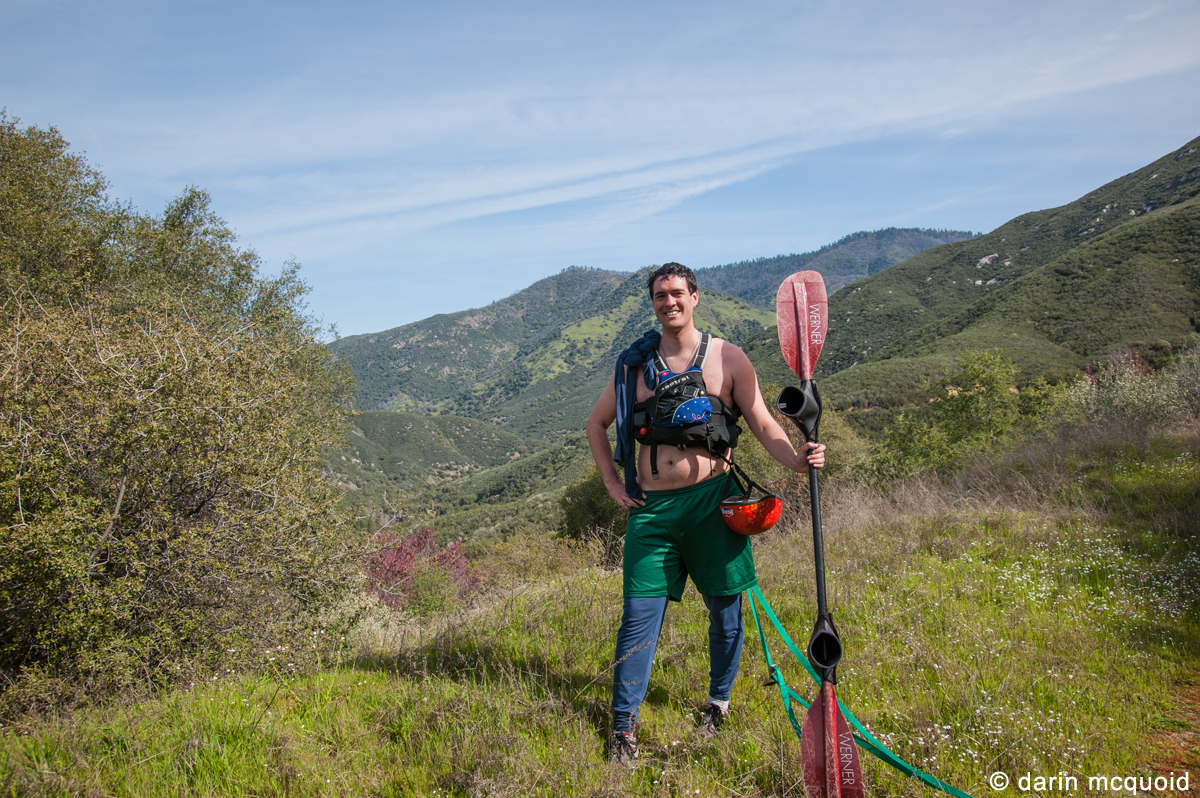 Hiking through a sandy part of the trail I notice Daniel's boat must be dragging a rock or something and have him stop. Uh-oh, it isn't dragging a rock. The three small cracks were close together, and two decided to merge into one hole. Armed with duct tape and at Burnt Point Creek, aka four miles in, we decided to push on to the river and give it our best shot.


Dropping in through the grassy fields. Put in is very obvious on this run, since you can see the put in slide from the trail, yet people have hiked past it... 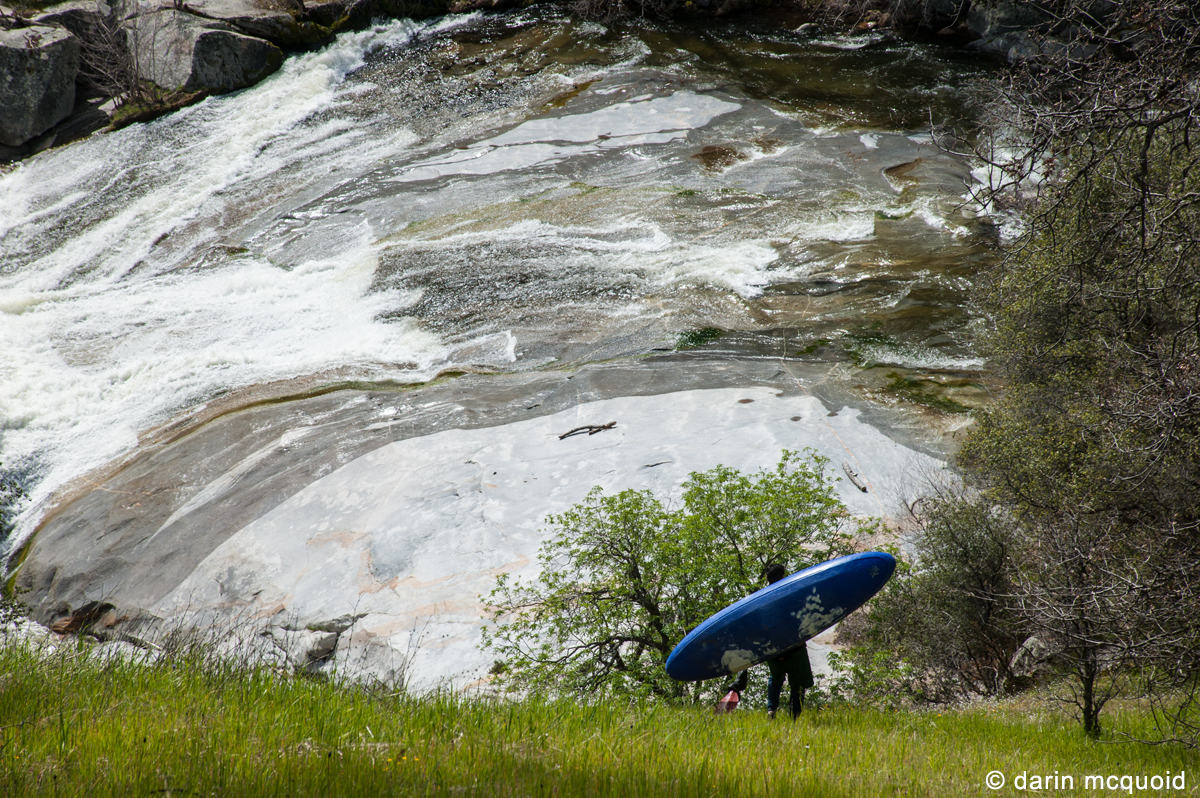 At the waters edge we were both tired from the hike, an easy four point seven five mile hike with a 40lb kayak and gear is still a four plus mile hike with a lot of weight! With only minimal beta on the run, Daniel wasn't too ecstatic about the condition of his kayak: paper thin under the seat with a significant blow hole. 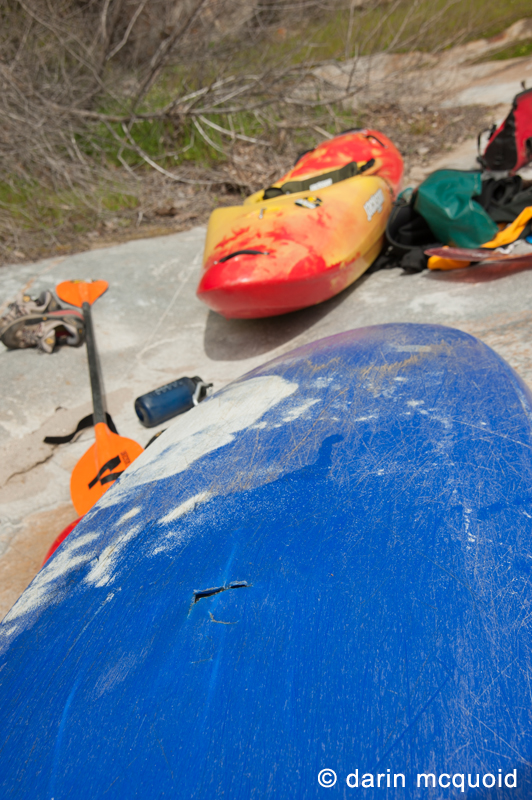 Lacking the proper tools to take out his seat, we were reduced to pogies on the inside and duct tape applied externally...this should last on a low volume, slide filled run right? 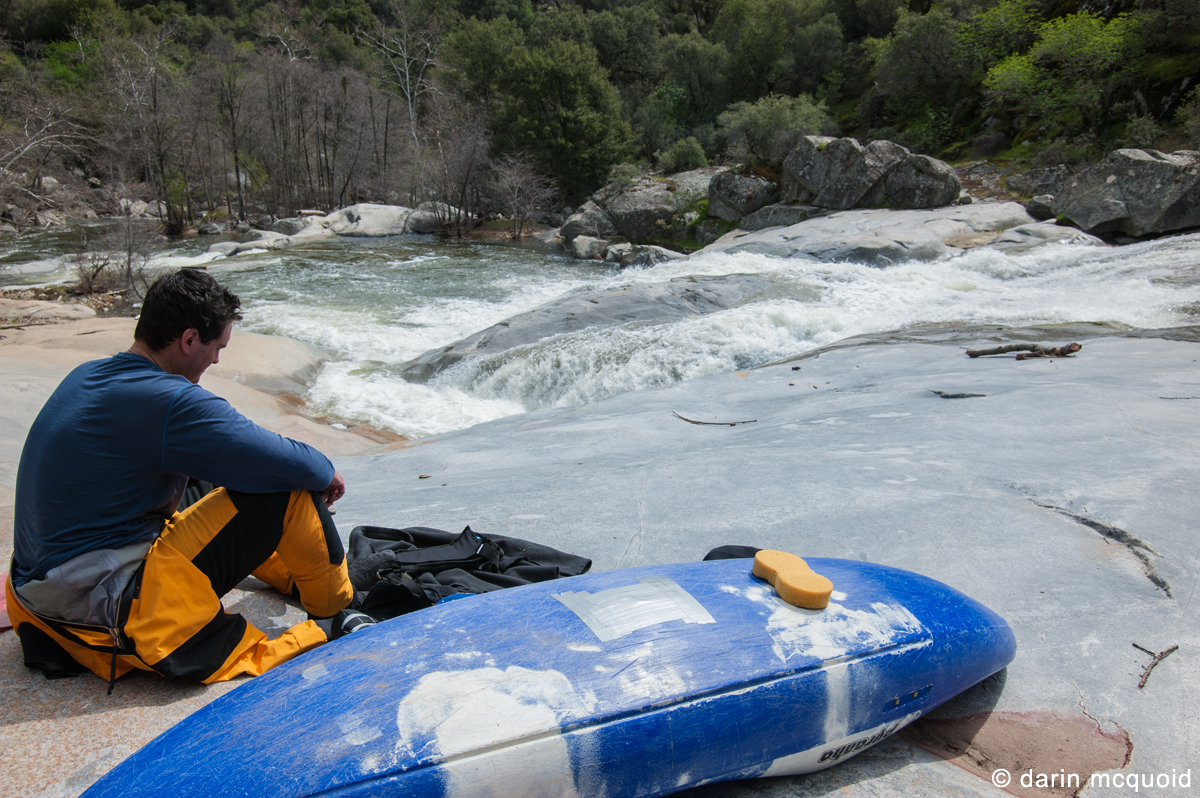 I had my doubts it would last past the put-in slide but held my tongue. Not wanting to waste time due to the envisioned amount of boat draining ahead, we geared up and Daniel probed the put-in slide, a nice fast smooth slide that drops more than it would appear from here. 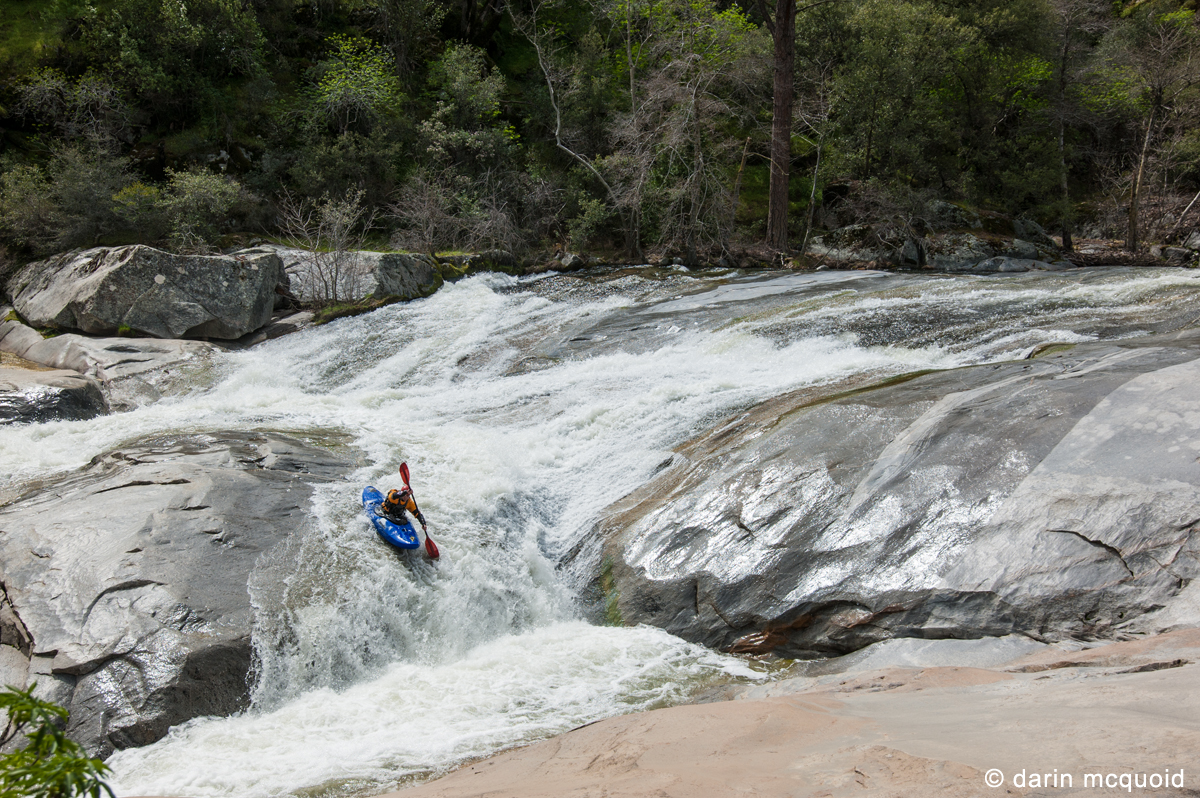 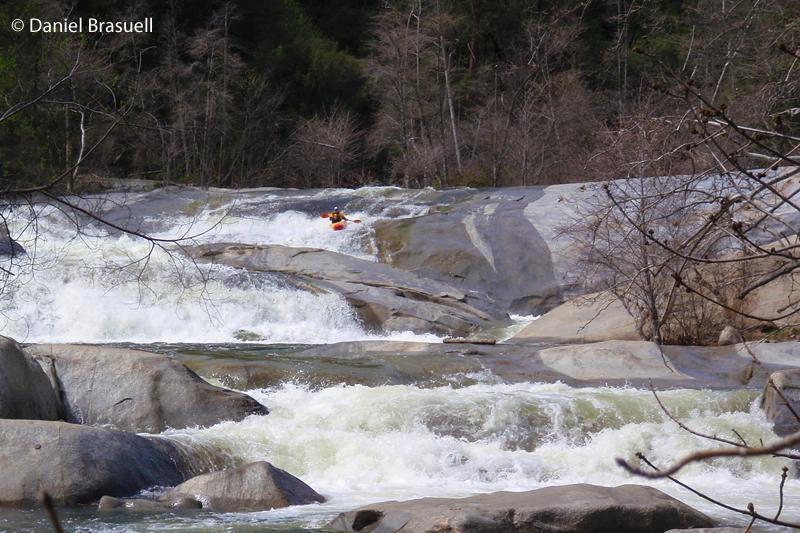 Rounding the corner below the slide we were surprised at the significance of the boulder gardens for what was reported to be a Iv to IV+ run. The next two boulder gardens might have been considered optional portages, as they certainly verged on class V (mank). I had low expectations and assumed this would be the norm with one or two more bedrock rapids, but was cheerily happy to see that our next scout led into a bedrock gorge guaranteed to contain several rapids.


Daniel boofing a falls at the bottom of a slide. 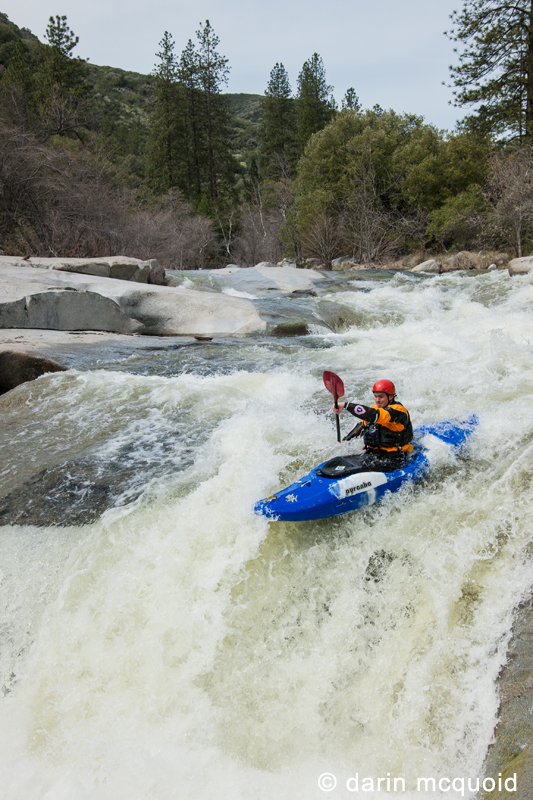 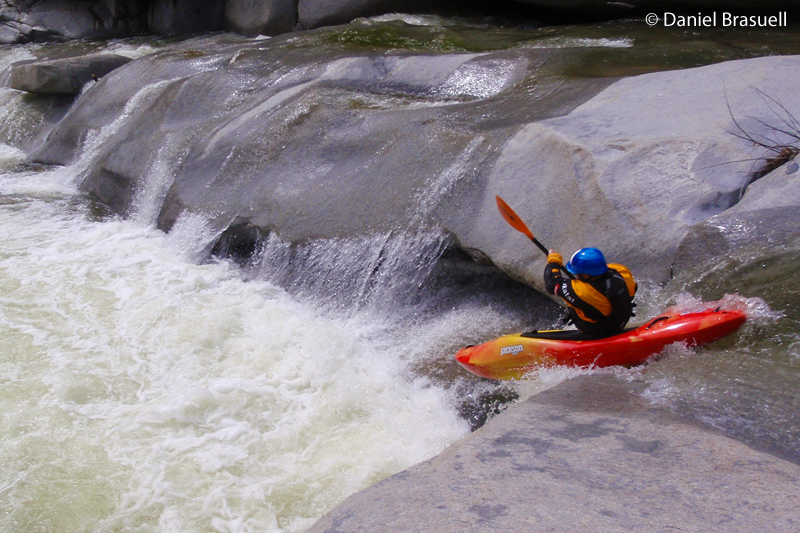 Daniel follows on the same with a lone pine standing sentential.

How smooth is the granite on the North Fork Kaweah? Amazingly the duct tape patch was still on Daniel's boat after nearly a mile of kayaking, and it was still more sliding goodness... 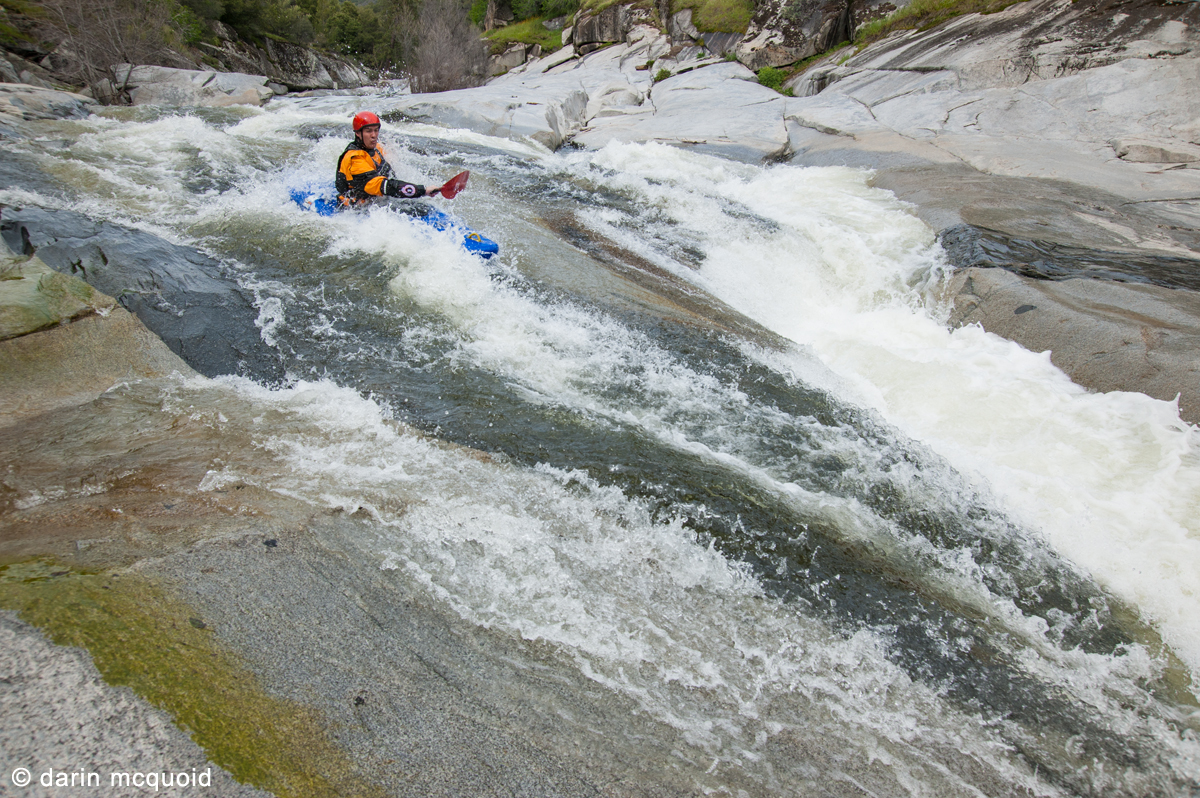 From high on the trail we'd seen one slide that we knew about, it has an ugly sieve on the right wall and the main channel slopes steeply into it. Thankfully there is a side channel that doesn't slope in too badly... 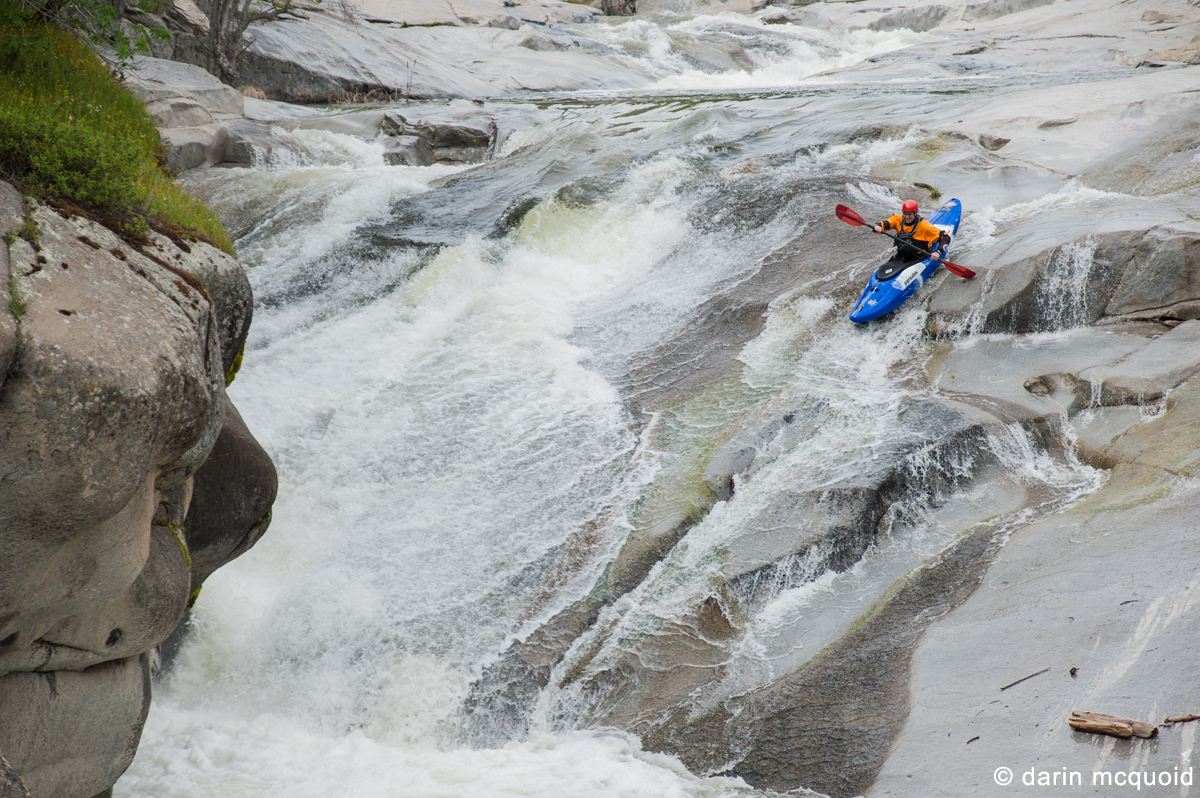 Author doing the same...at high flows there would be a bold and unnecessarily zesty line from center to left. I think I'll just stay left from the get go. 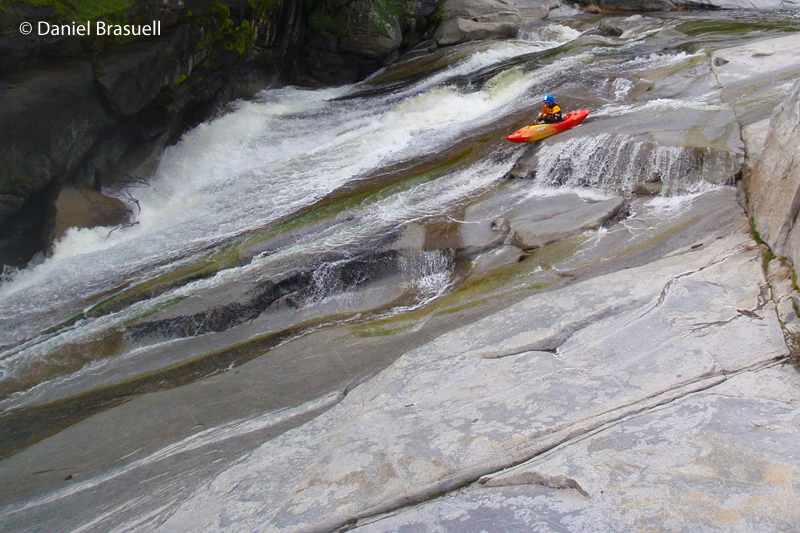 The pools in this section are just incredible, it's like a IV+ version of Dinkey Creek or Upper Cherry. Nice sized drops landing in perfectly calm pools of water. 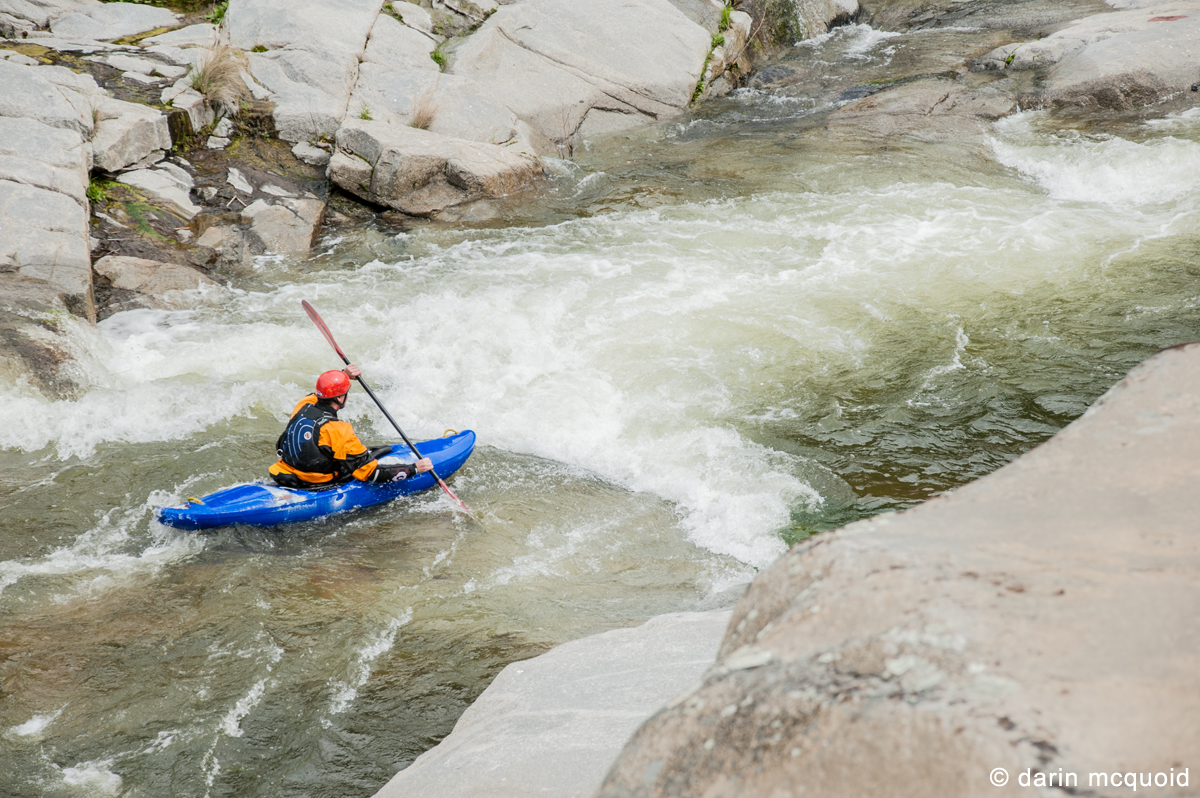 Burnt Point Creek enters from river left and we assumed the bedrock would be done at this point.


A large rapid lies below and is worth scouting; Daniel on the lead-in. 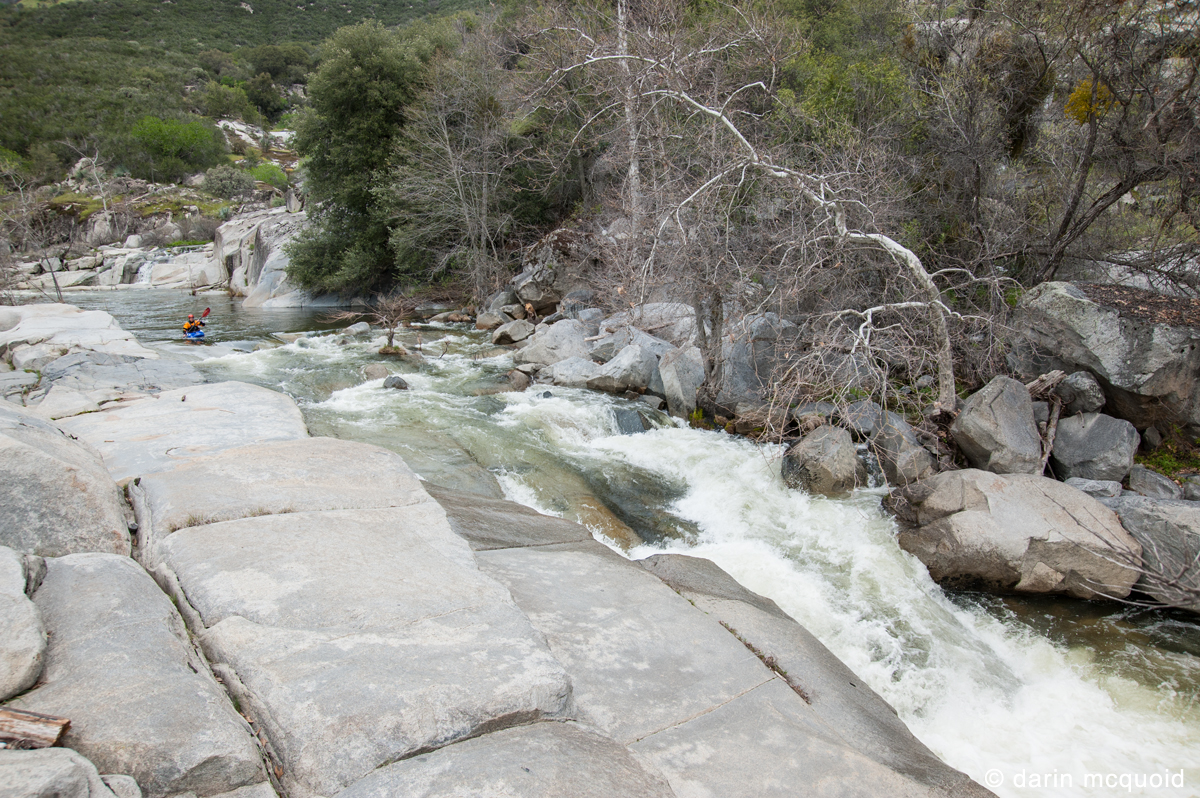 Still the same rapid, about to punch the center hole. 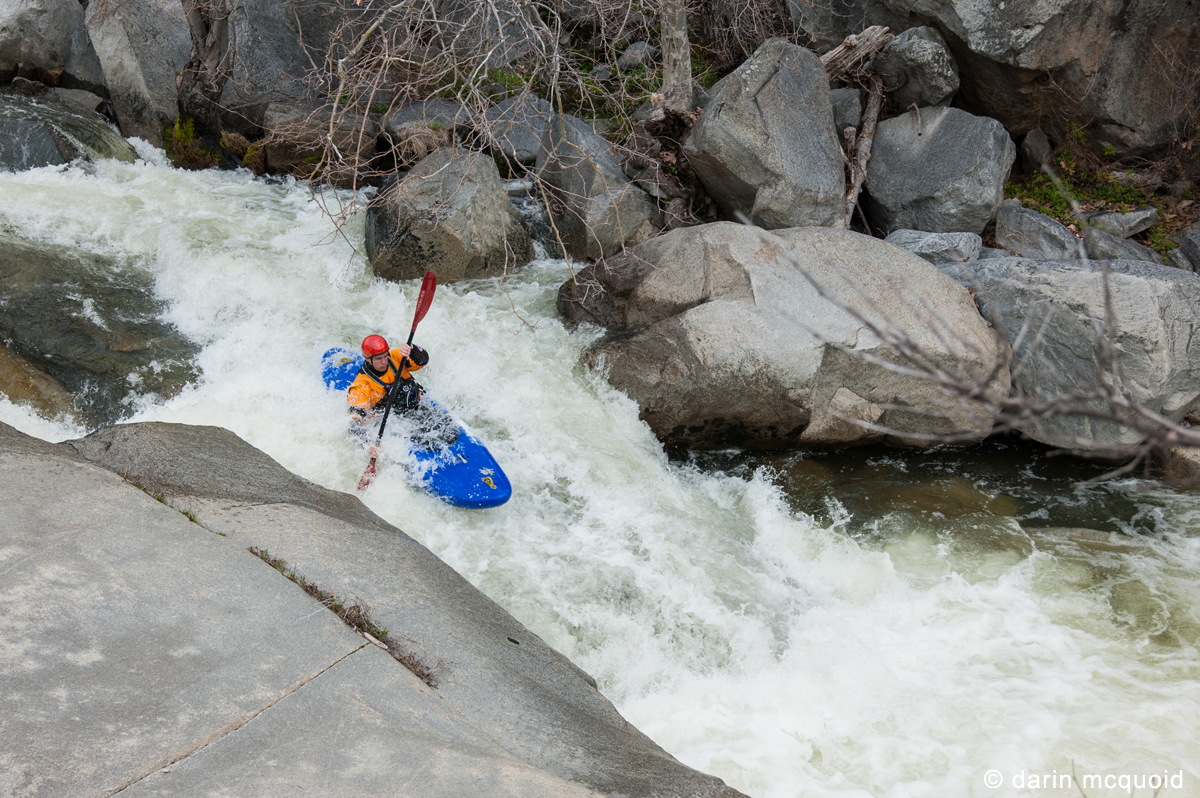 The crux of the rapid is really the bottom hole, which looks worse than it is (but a swim would be sketchy here). 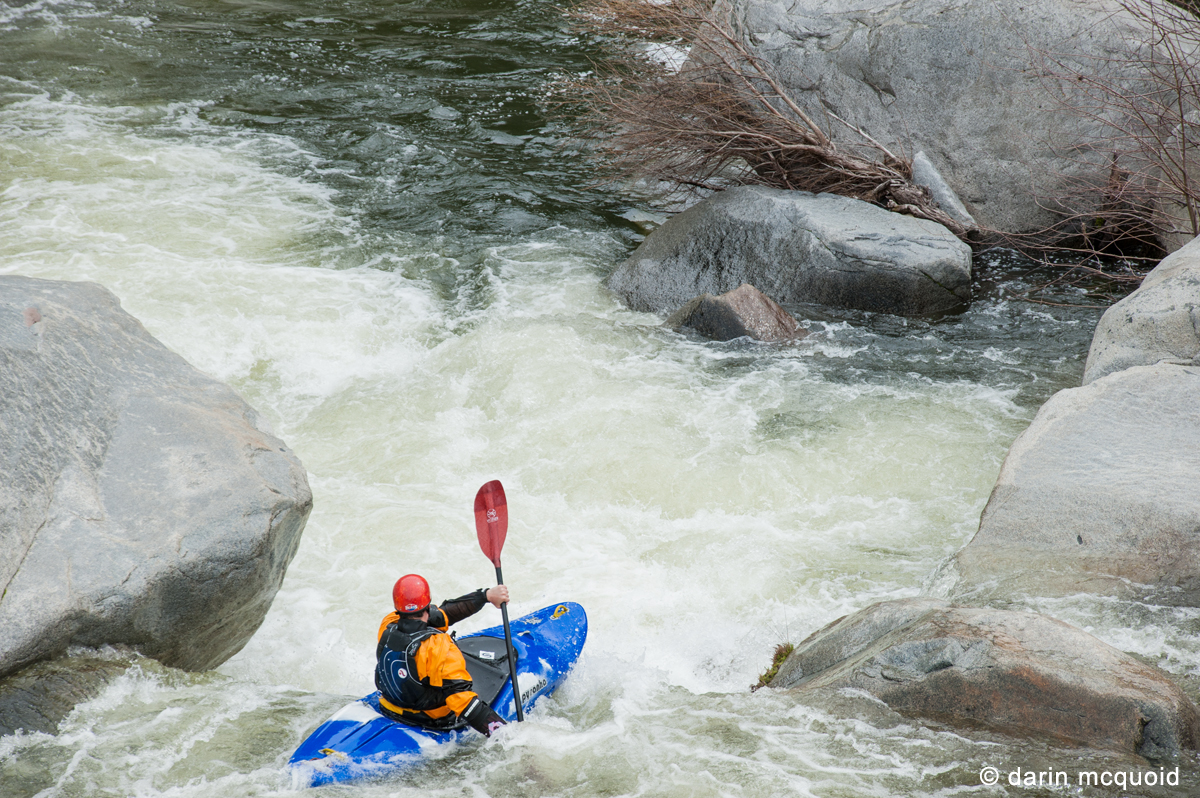 Past the large rapid we were dismayed to see the expected boulder gardens, knowing they would take a toll on the patch. Considering the flow they were fairly well channelized, and after only a few of them we were gleeful to see a bonus section of bedrock, starting off with a nice big class II slide.


Easy does it on what seems to be a big class II. 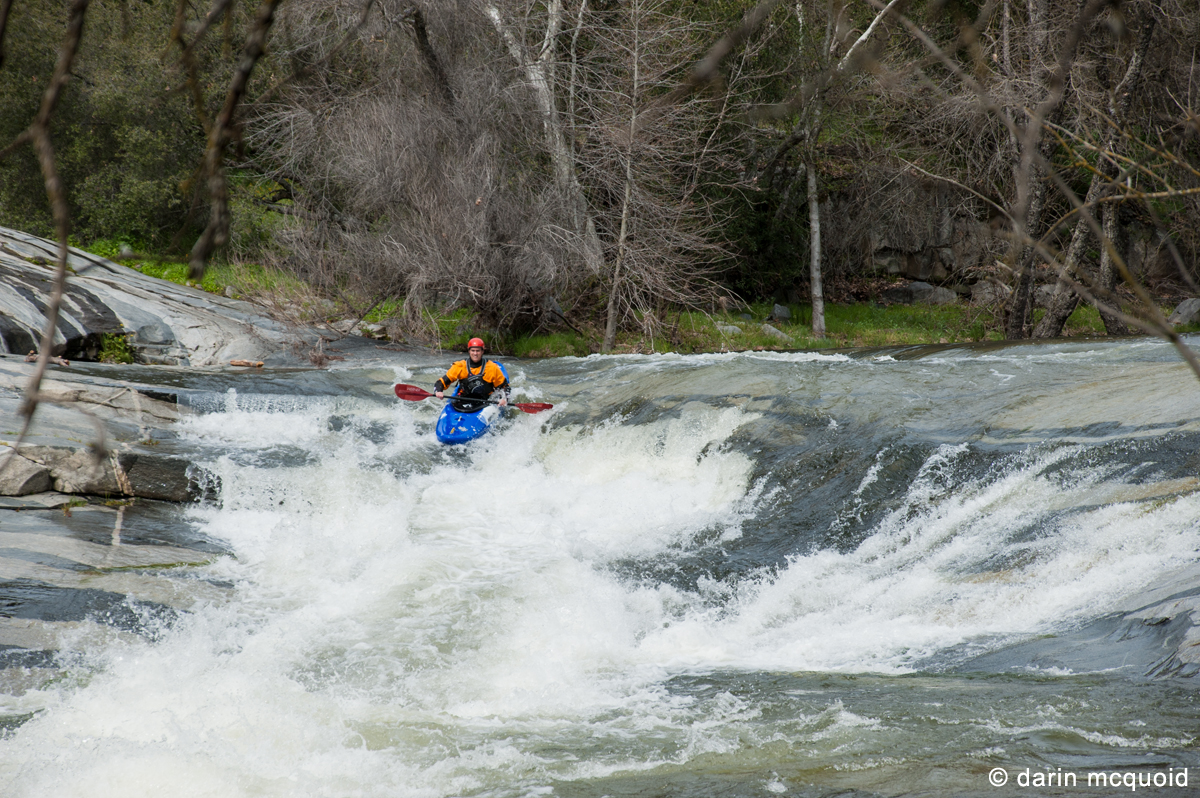 A long pool led away from the slide, and we paddled off with low confidence in the continued quality, but the long pool finished swiftly with one of the foremost cataracts of the North Fork Kaweah. 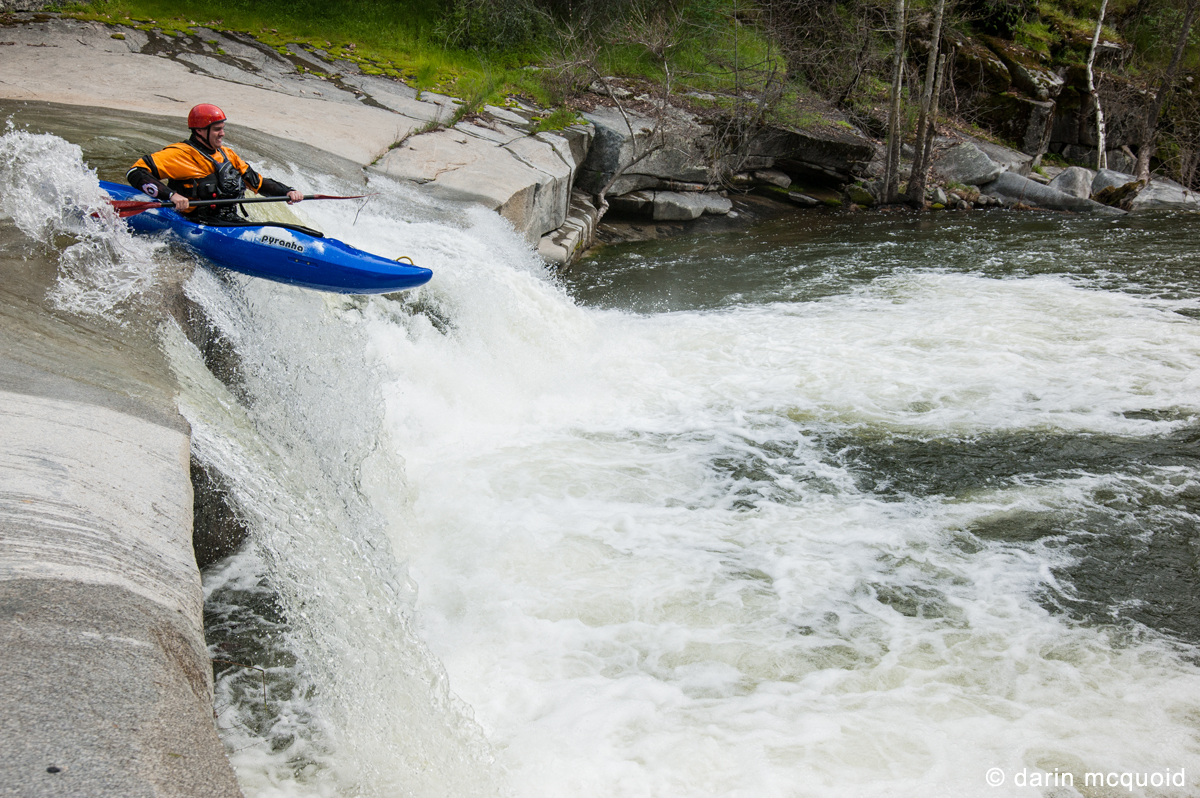 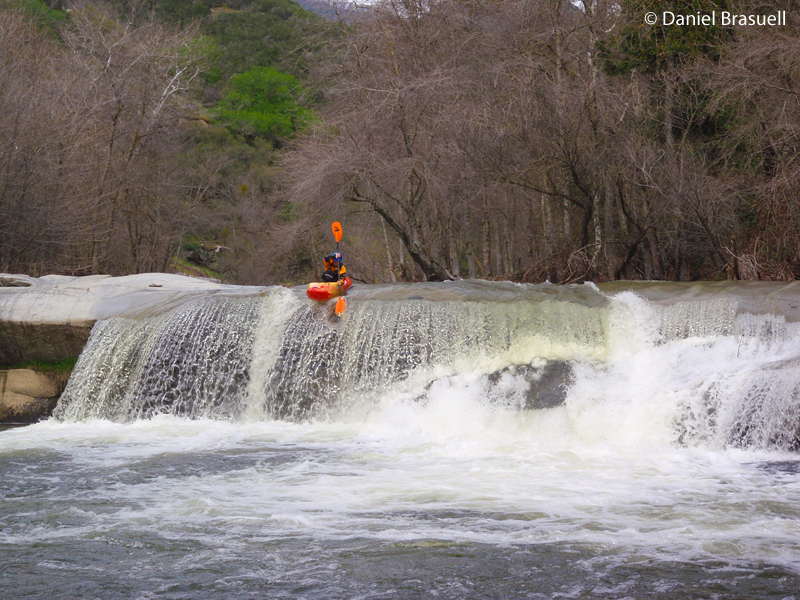 Following the fun falls was one of the more commonly portage rapids of the run, due to the prominent location of a sieve at the bottom, which the author avoids. 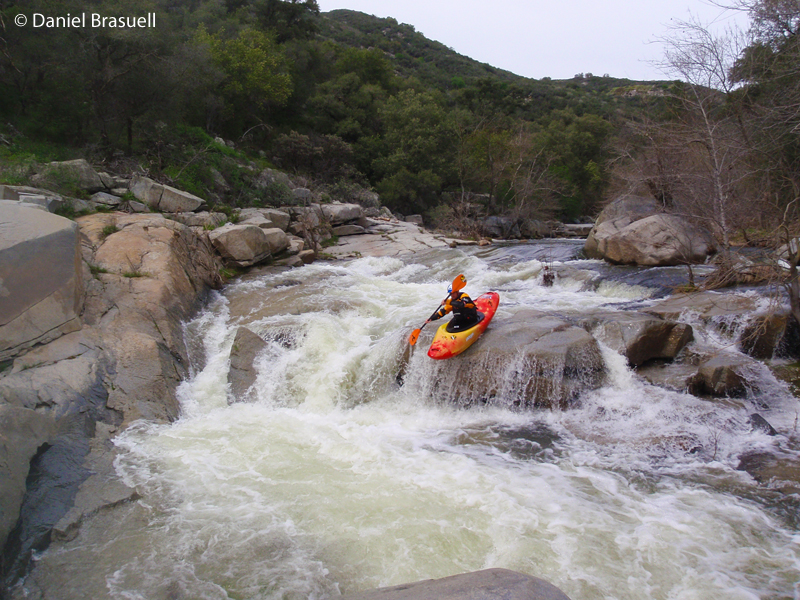 The river braided, twisted and turned through countless boulder gardens in the next two miles. Only a short ways into them the patch was gone, a second was applied but it quickly fell to the nature of the river in just a few minutes. The toughness mellowed to IV in nature, and we would push as far as possible downstream before draining Daniel's boat.

Even with the bailing breaks, it didn't take us too long to run the rapids and round the final ridge line marking the confluence of Yucca Creek. 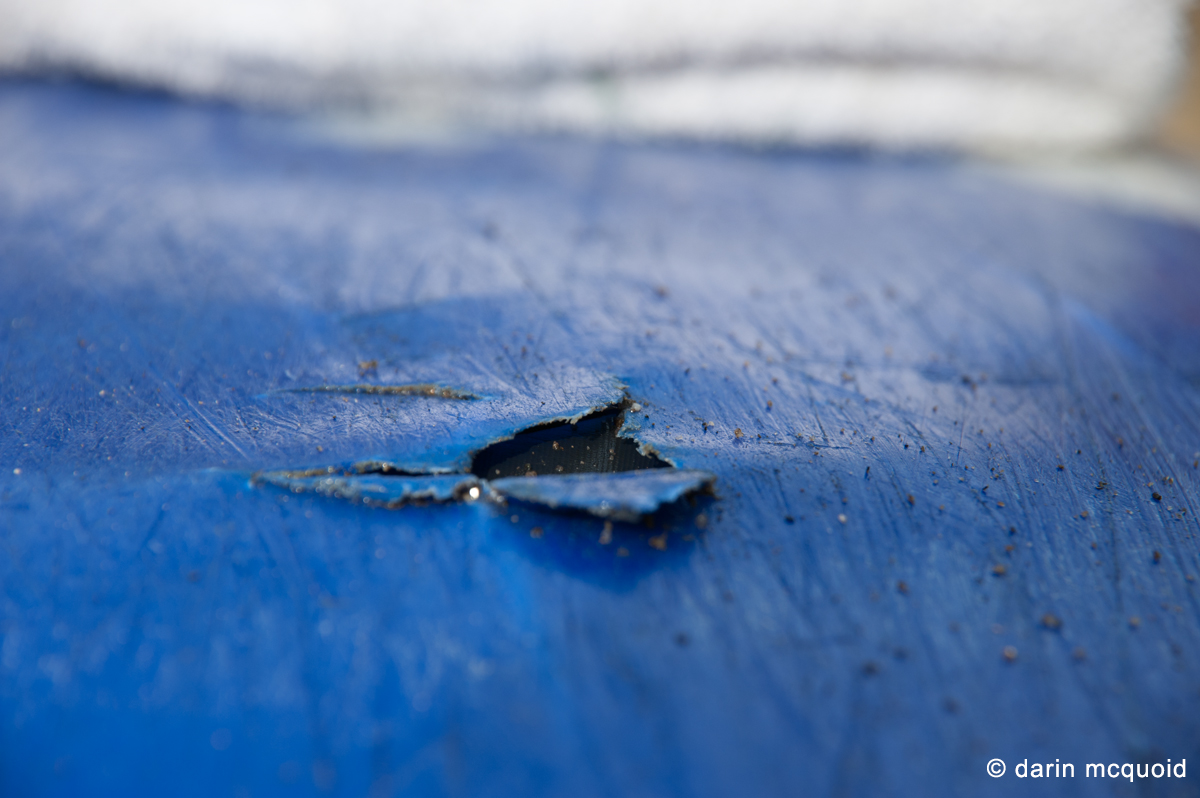 I would certainly kayak the North Fork Kaweah again. While it may not be the mos bang for the buck for class V kayakers, it offers something unique in the Sierra Nevada; all the classic things that the state's whitewater is known for; a hike in, granite slides and wilderness scenery yet only IV to IV+ in nature.

Dreamflows estimate for the North Fork Kaweah
We had around 300 and thought it was accurate.