The rapids would loook like grade III from the road, but soon enough we find ourselves perched above scout worthy rapid. From the road it looked like an easy move, underestimating the Indus is a consistent mistake for our group.

Ben Stookesberry about to take a hit, quite a hole hidden by the rock. 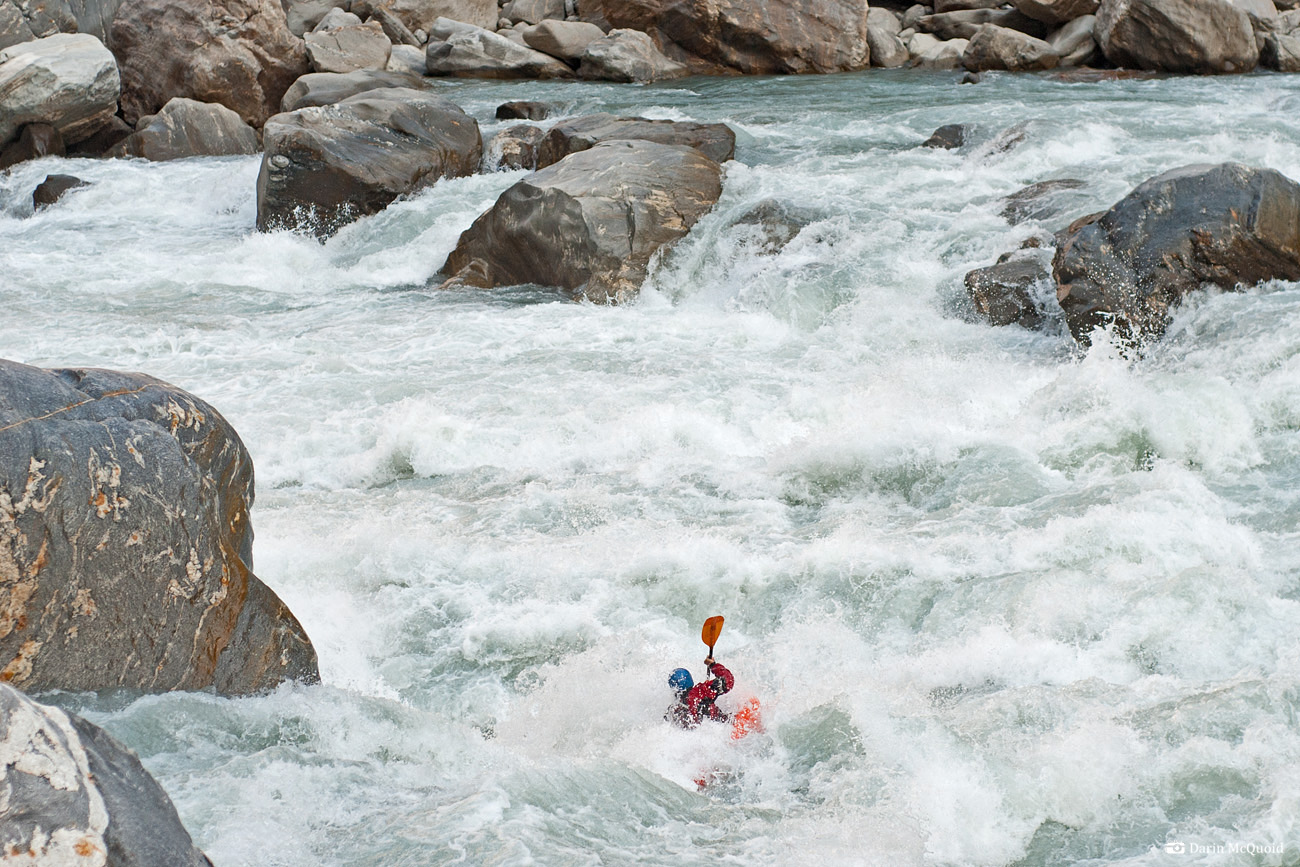 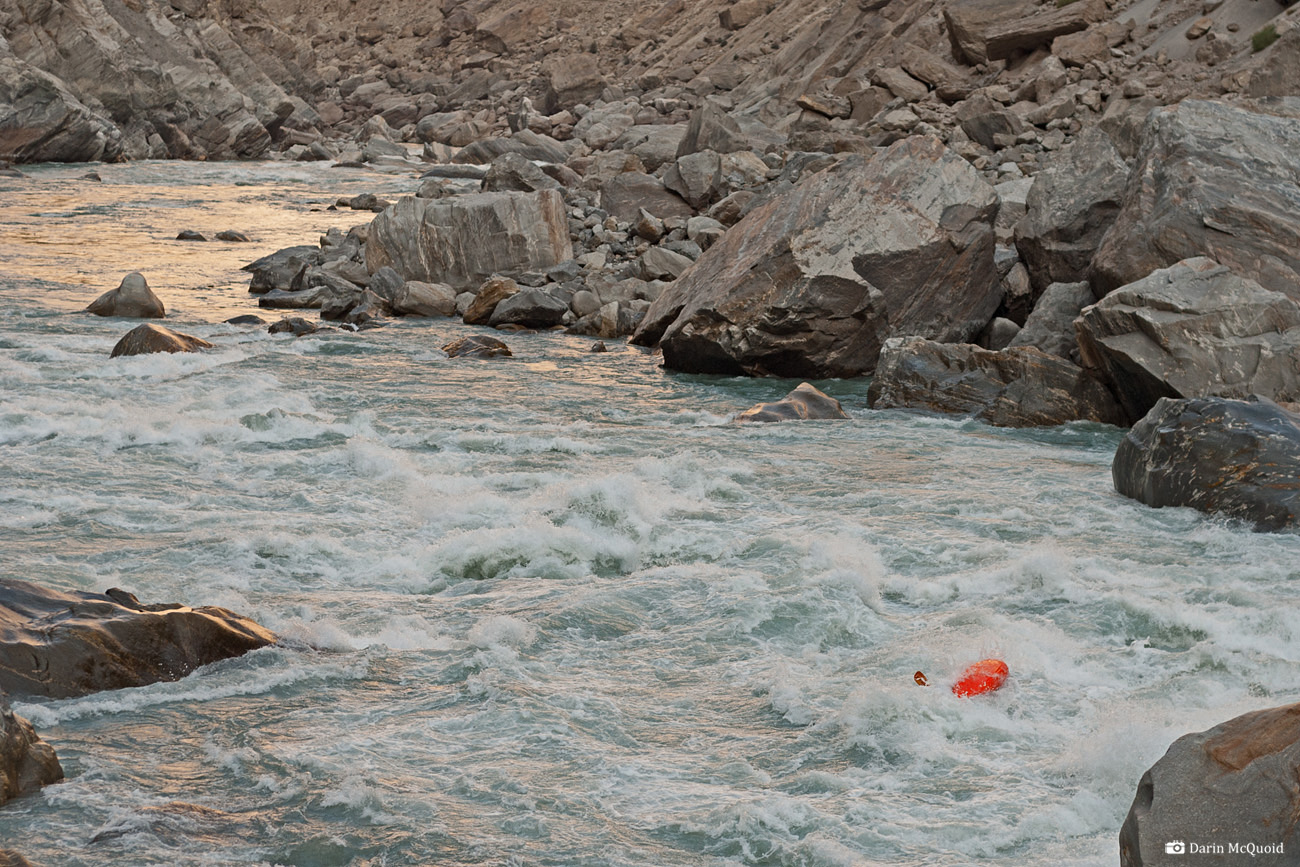 It looked like Phil and Ben were perhaps a little left of the ideal line, so I ran the entrance intent on getting further right. I came down the initial ramp and got in a central eddy, which was really a swirly, boiling mess that took me a bit too long to get out of, but I managed to get out where I wanted and came into the hole, only to have the same end product. The hole wasn't retentive, but the hit was more akin to running a waterfall than the big fluffy thing it looked like. 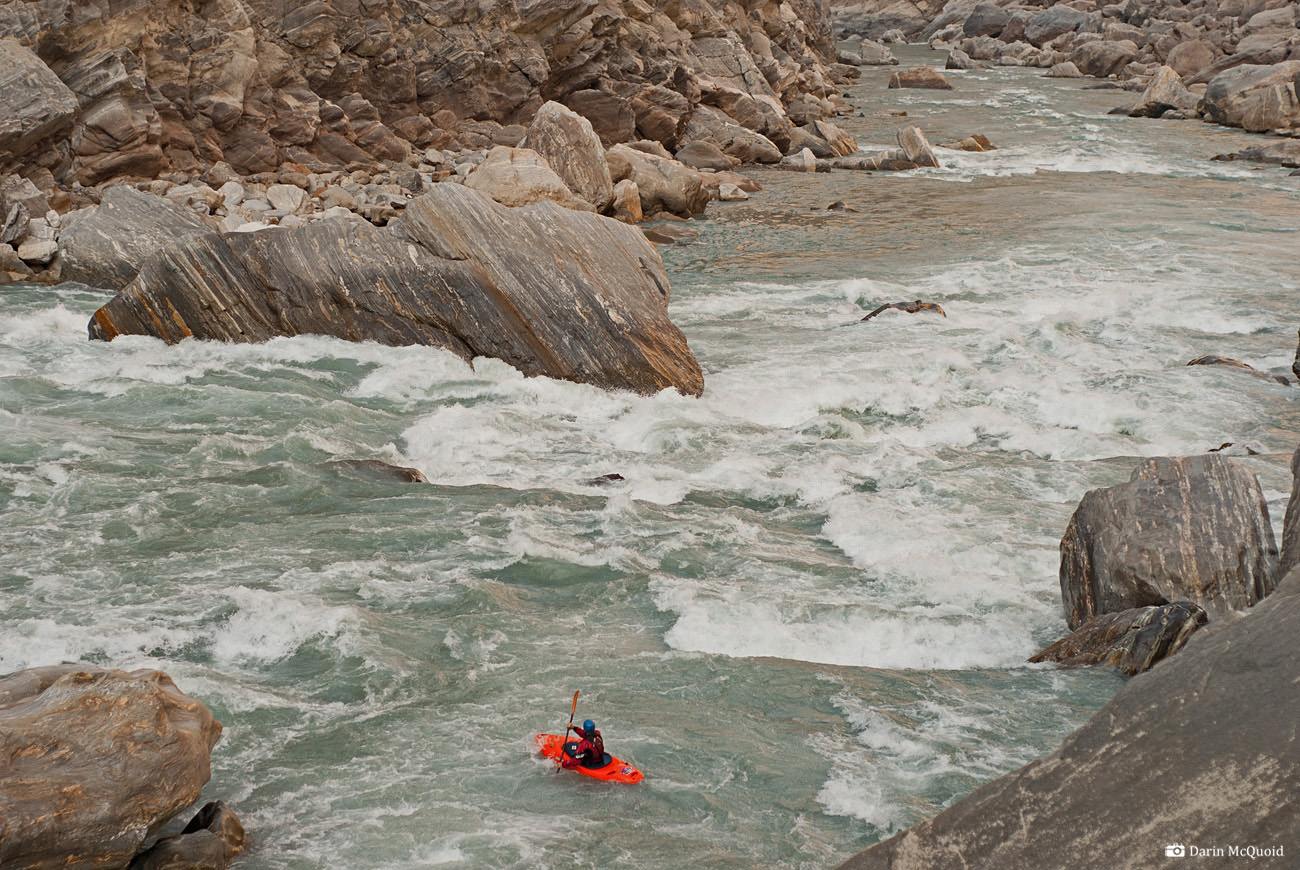 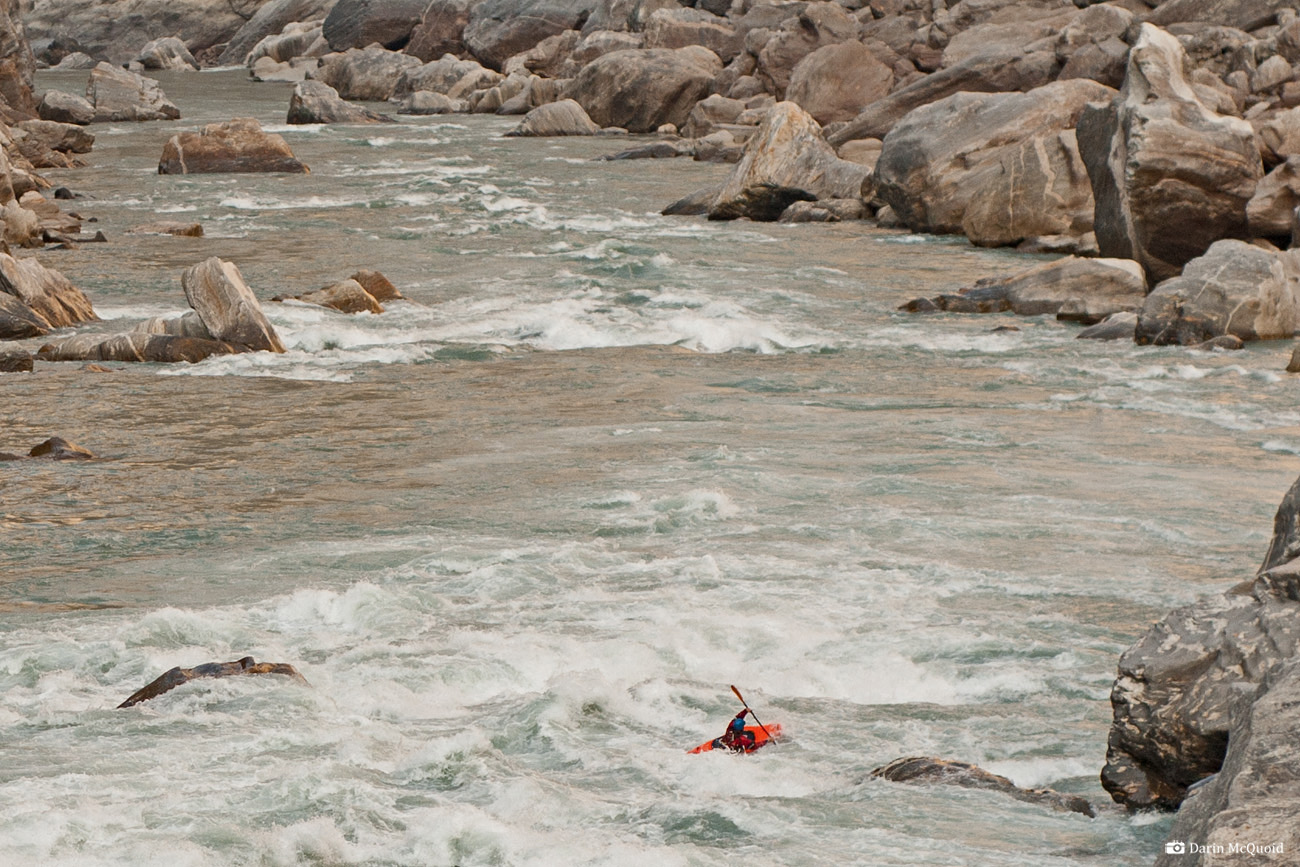 High above we see a rapid that looks terrible, and our assumption of a portage is correct. The river funnels down and cascades over what is sure to be a pile of rocks.


As always, hard to put it in perspective. I shoot this while scouting our next rapid. (Many years later this is the last un-run rapid on the Indus) 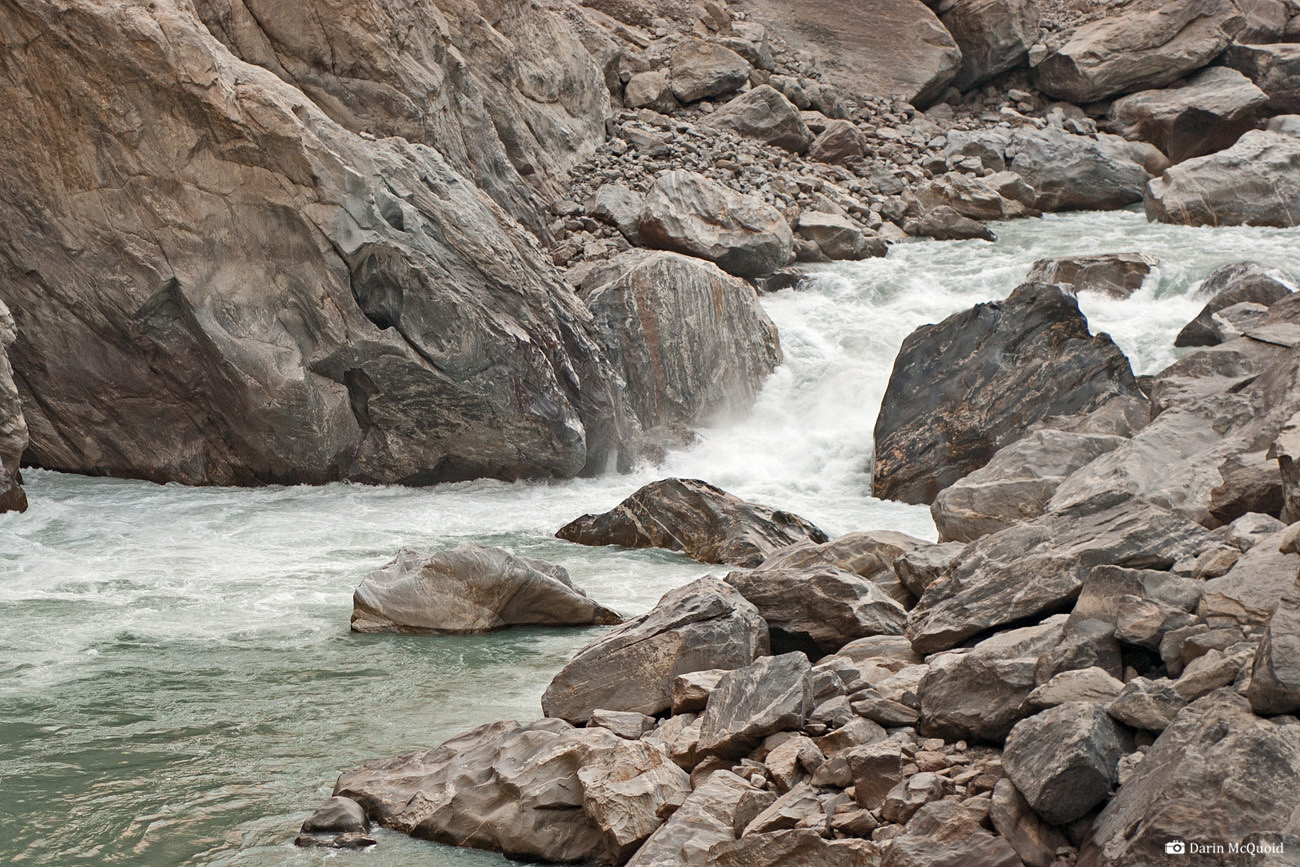 Note Phil Boyer in the foreground two hundred yards downstream from the portage. 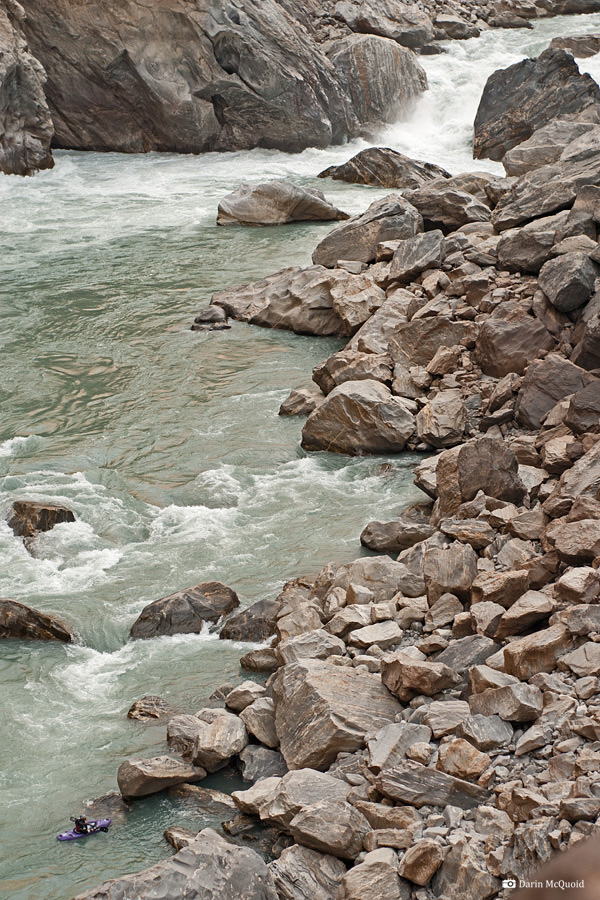 A large cliff looms over the next rapid rapid so Ben and I climb up to the over hanging ledge and get a different look at the river. Phil Boyer enjoys a mellower rapid. 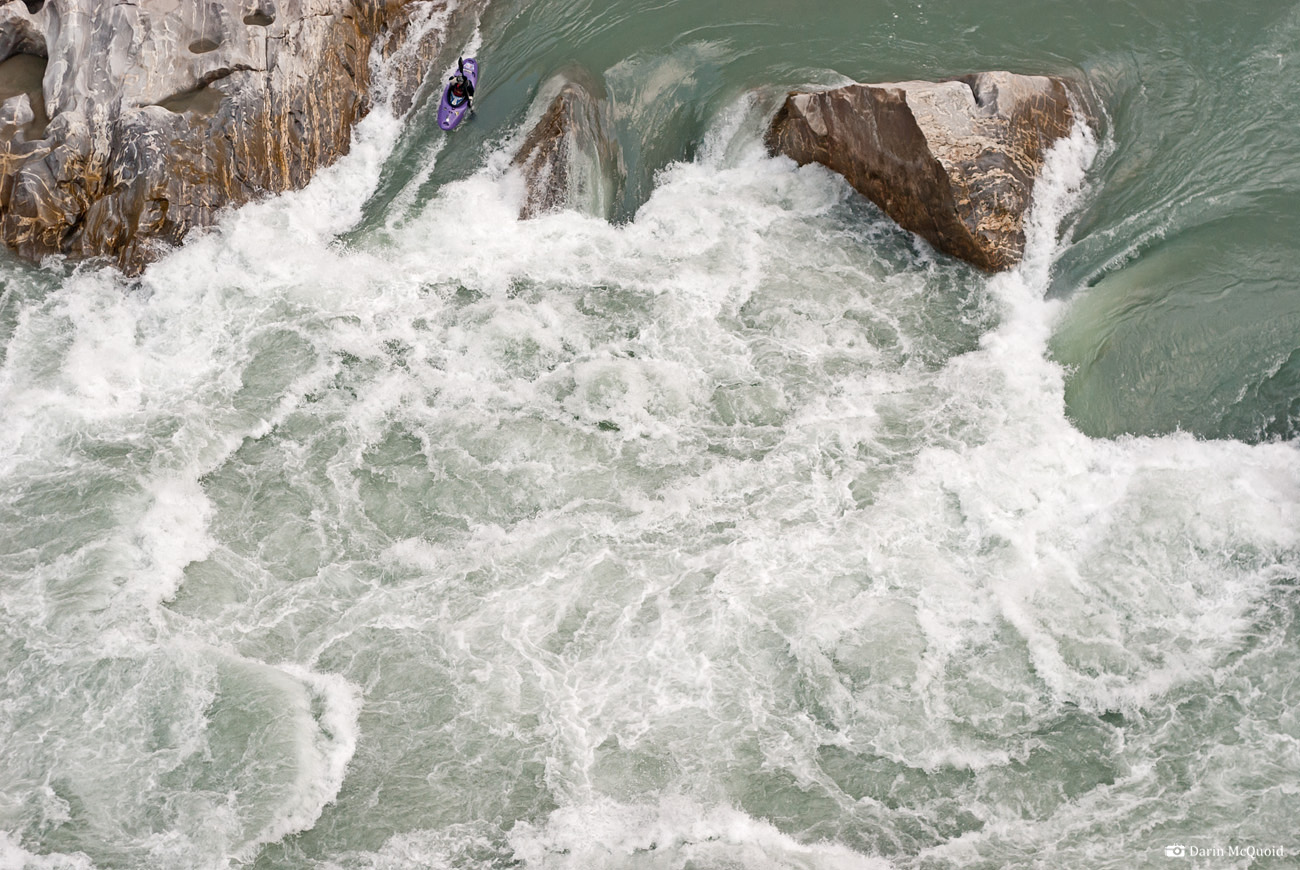 From the mellow to exciting, the Indus levels up a notch as we continue, Phil Boyer threads the needle. 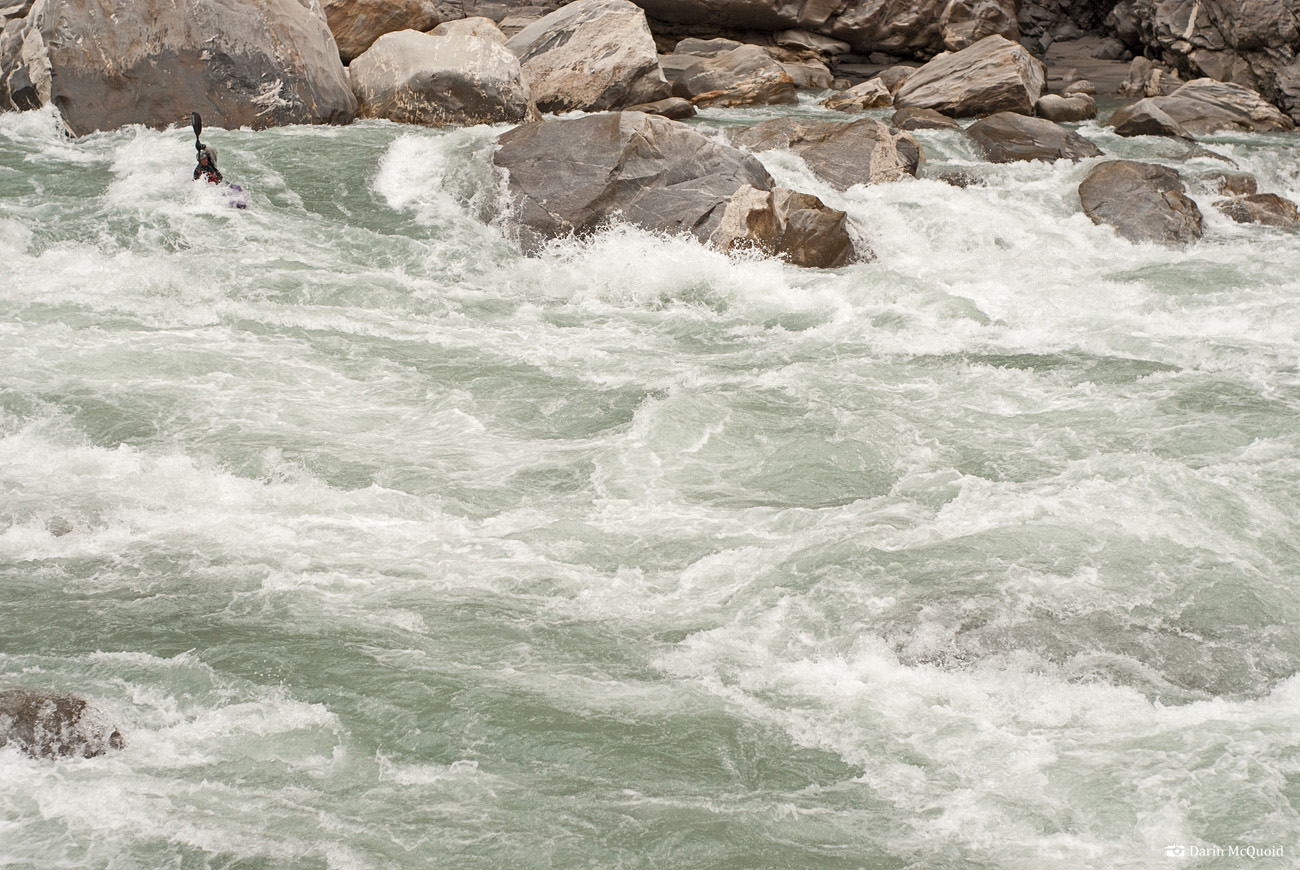 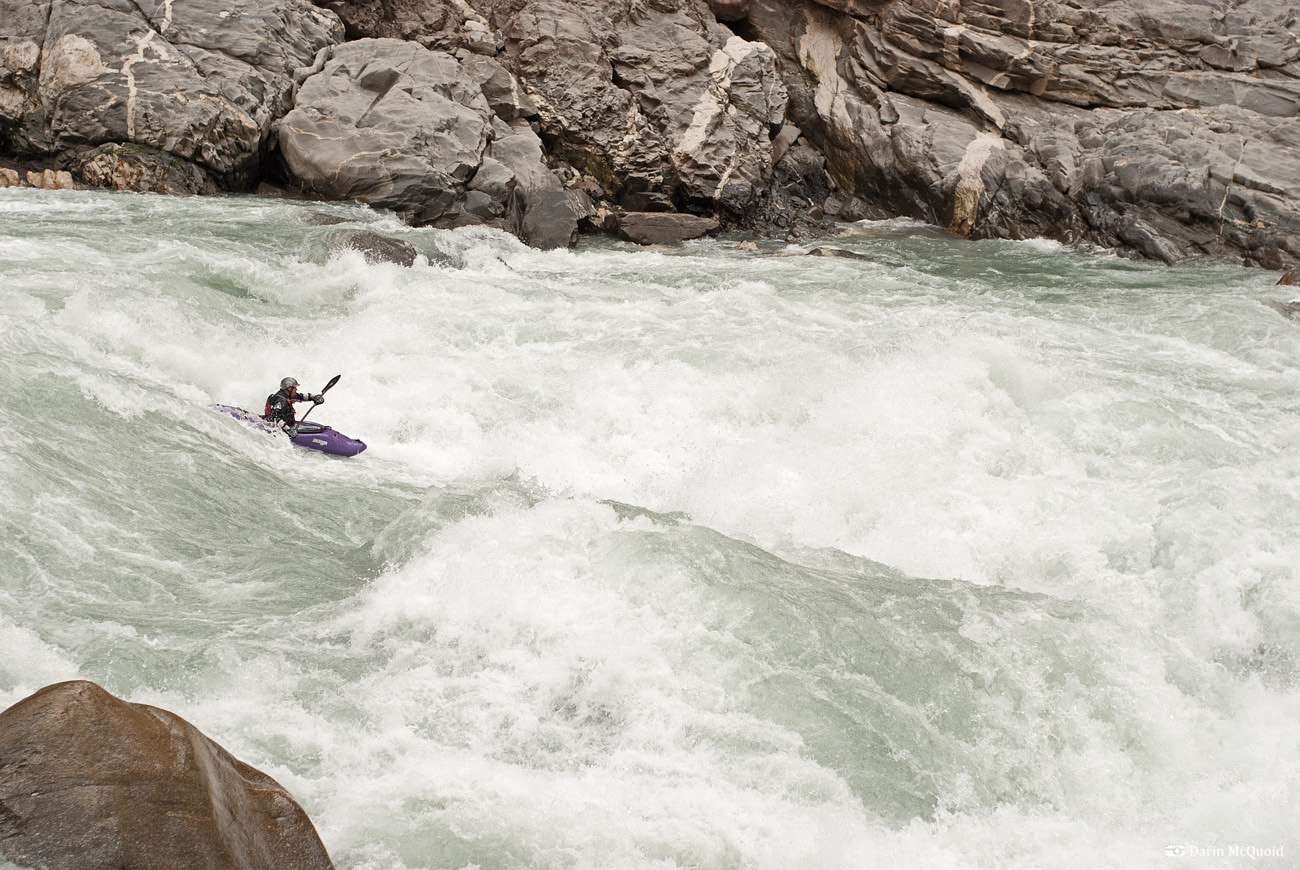 Approaching the next horizon line Ben peeled off to the left while we scout on the right. Immediately I find myself wishing we'd gone left to. There is no portage on the right and it's was too late to make egress across without considerable effort. Goliath center holes block any direct route, and going down the right requires climbing over a few feet of boils, no easy task. What truly concerned us about the right side was a possible pocket hole at the bottom.


Phil Boyer proclaimed it safe and probes down the right side. 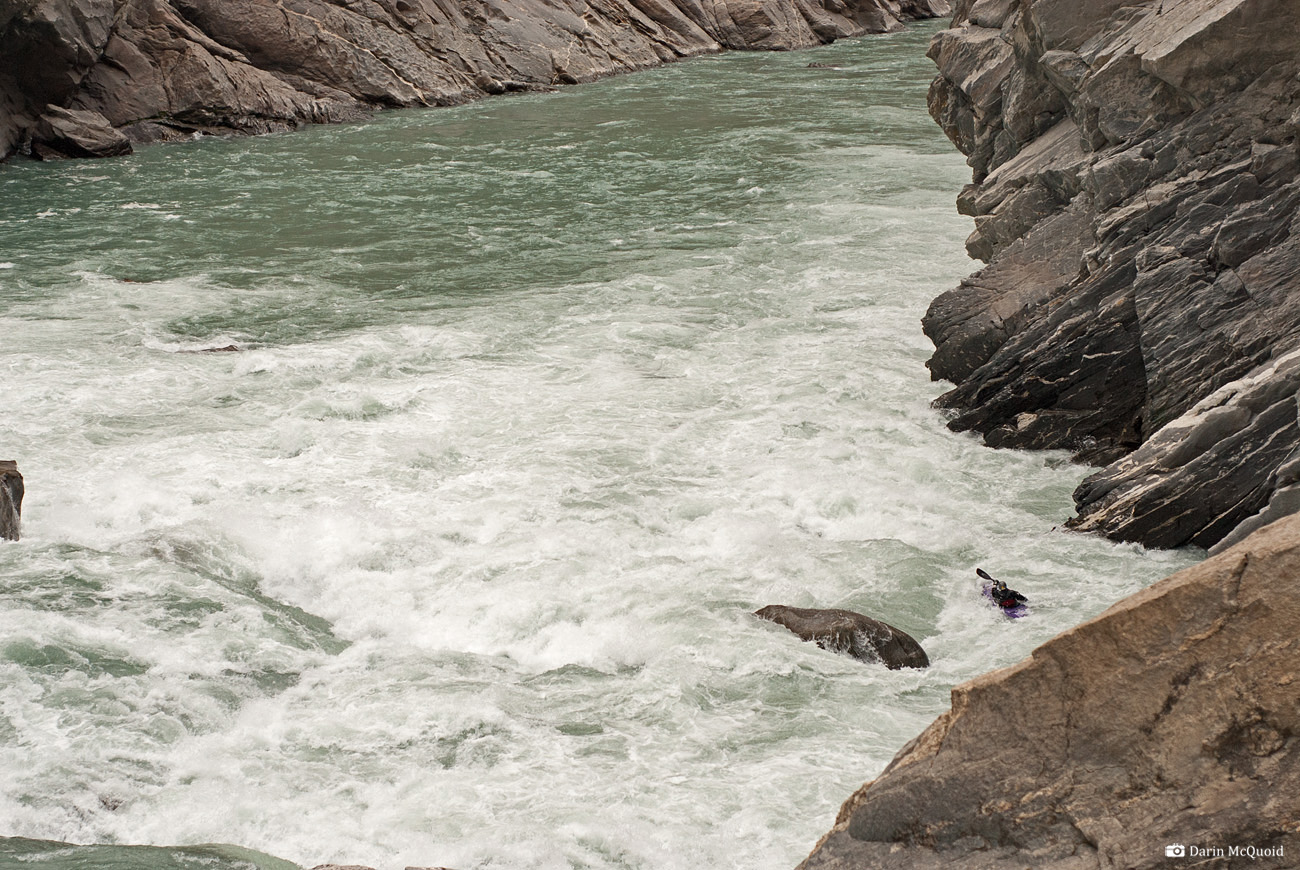 The boil surges as Phil comes into it, rejecting him to the edge of the pocket hole, where he disappeares to resurface back in the main flow, well clear of any recirculation. Whew, it went, but we still are not too psyched about it. With no other real option I go next and get lucky with the boil, managing to get over it and stay away from the hole. Chris soon follows, is caught by the boil which pushes him into the center of the hole...backwards....we all hold our breaths for a moment, but he resurfaces back in the flow with a deft roll. We're all glad that water is generally more forgiving than it looks like.


Back on the left side of the river, Ben Stookesberry has scouted out an alternate line with a boof perpendicular to the current. 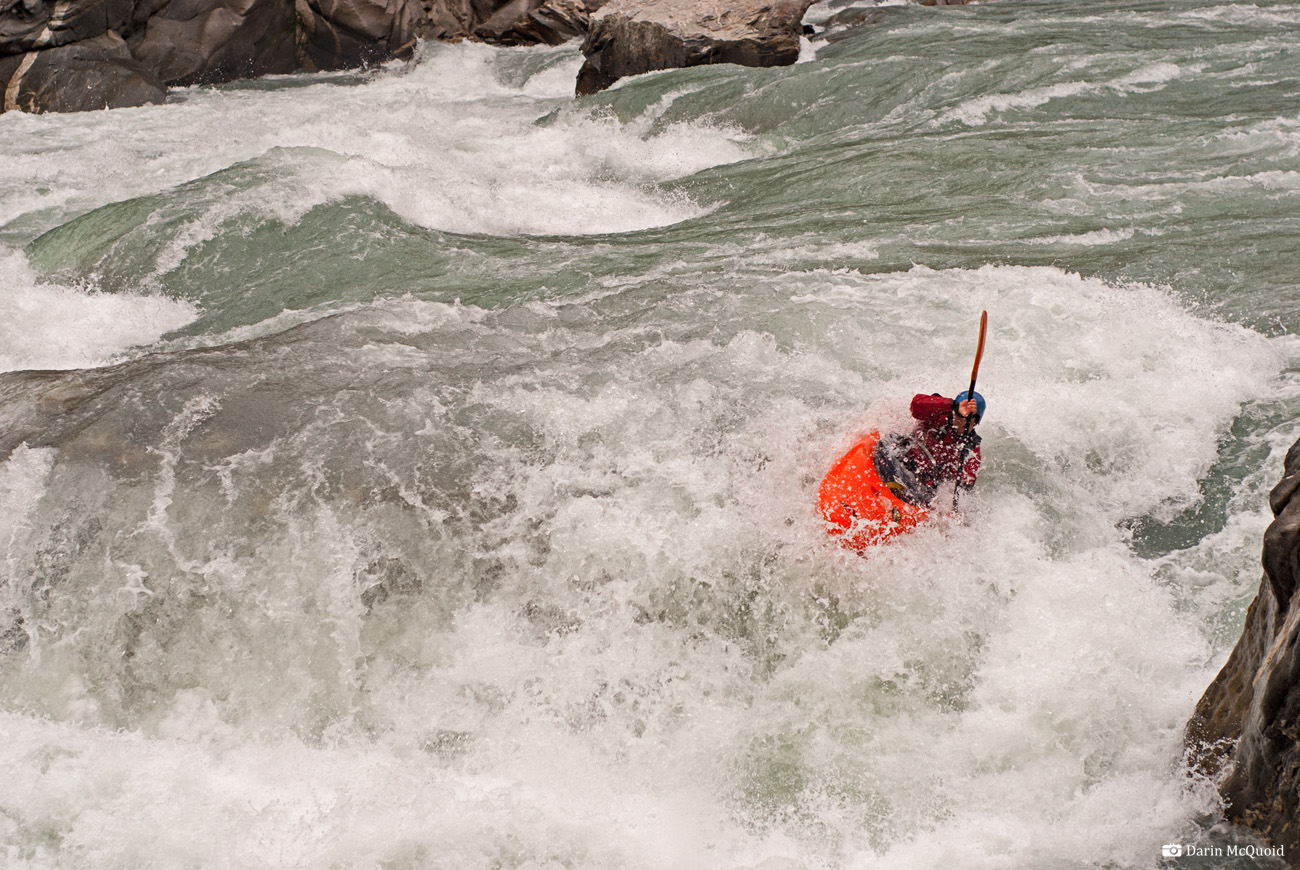 Surfs up! Timing can make all the difference in big water, and in the run out a wave brakes overhead as Ben comes in and typewriteres him fifteen feet over into another crashing wave... 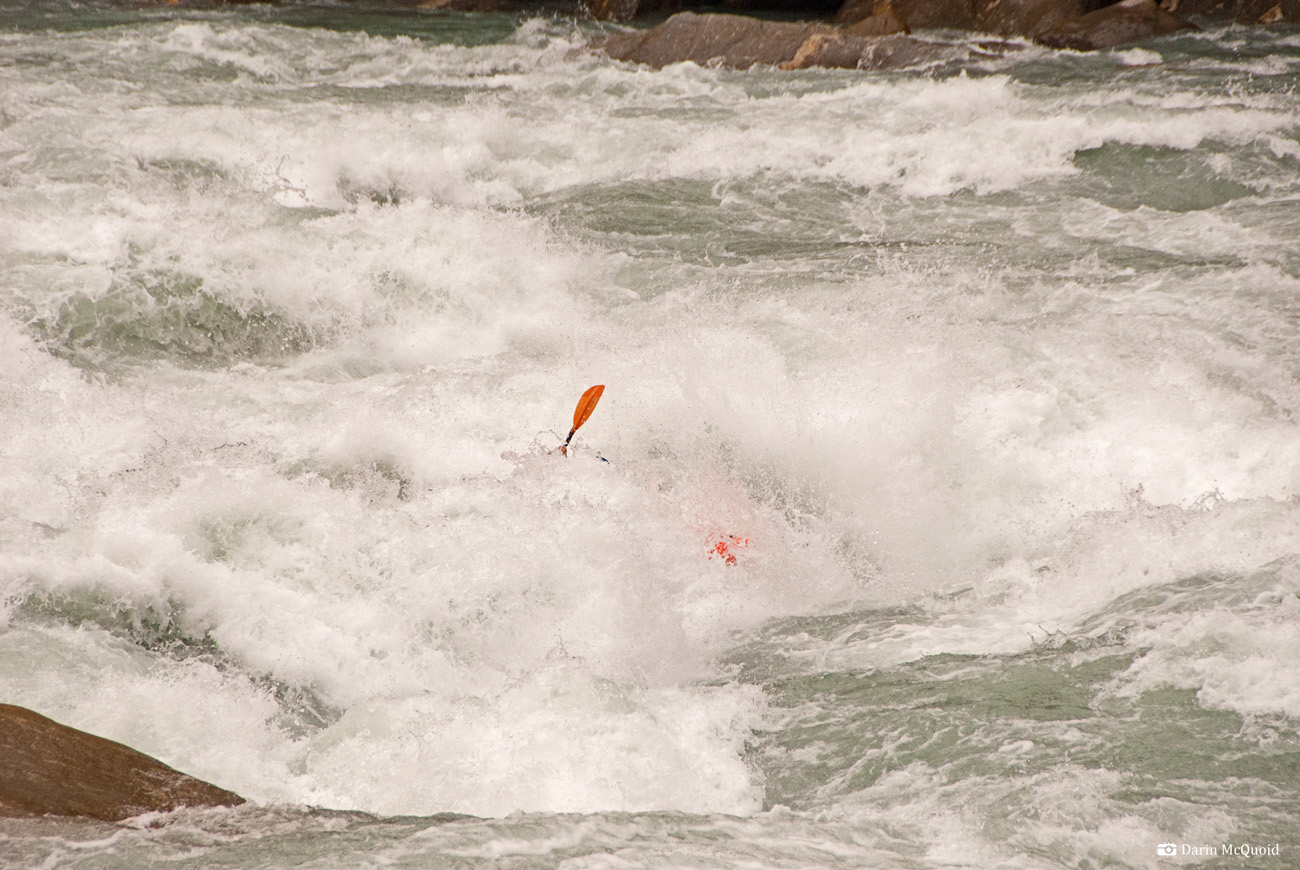 Whew now it is our turn. Ben's luck on the timing didn't fire us up, but in reality the rapid is just a really big class III. I go next, coming out of the eddy as high as possible, trying to gain plenty of right to left momentum. I try to paddle at a nice steady stroke, and as I approach the wave I put my head down and keep paddling, tensed up and ready to take a hit and quick surf...but I get lucky, and the wave turns green as I crest over it and past the center feature, barely getting my face wet!


Phil Boyer catching air before making contact with the wave. 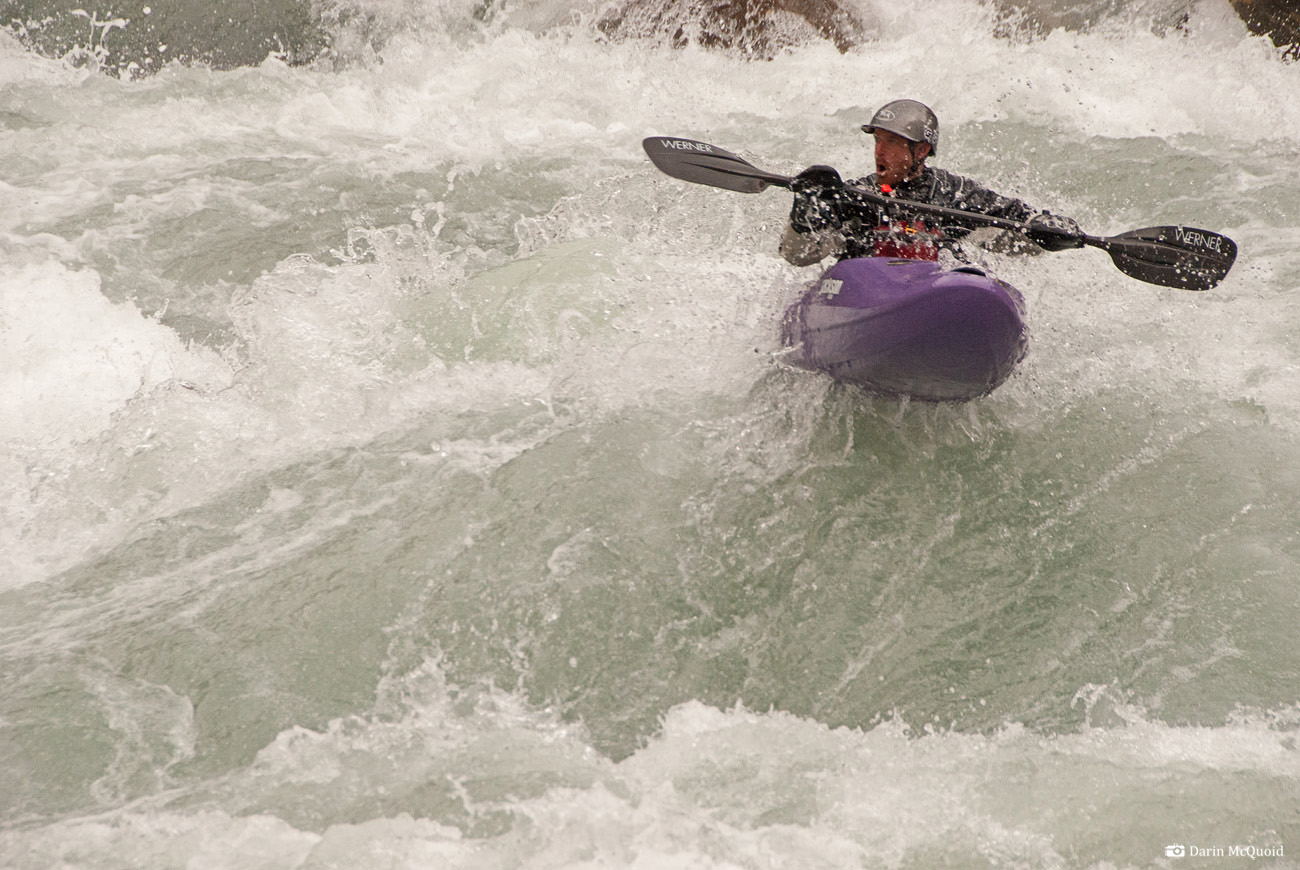 The wave brakes as Phil hit it, but he resurfaces on the other side. 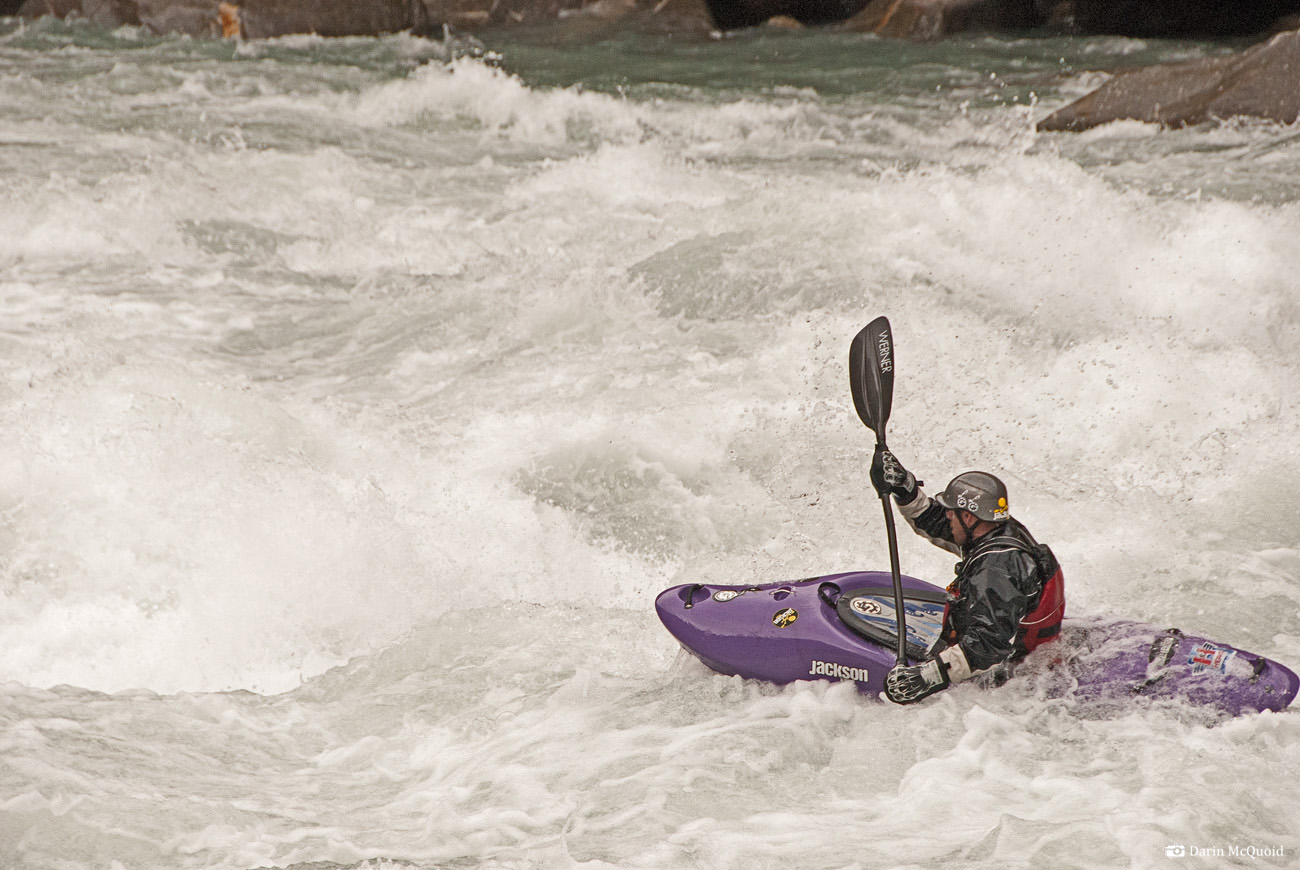 Tired, we are looking for a beach, and soon enough find a small patch of sand. As we unpack and explore our the beach, we are stoked to find some driftwood. On the Indus most of the driftwood is picked up by locals, so the camping to date had been cold and. We are only too glad to sit around a campfire and soak in yet one more day of epic paddling on the Indus. How can any river be this good consistently, and will it continue?