Rest was the only thing I was looking forward to after getting done with the Grand Canoyon of the Tuolumne. Technically we had really finished early in the morning, but Ben Stookesberry was awake at six am and checking the outflow of O’Shaughnessy Dam. Too soon he was waking us up talking about “the sneak of the century” and an opportunity too good to pass up. Plus, we still had extra food and all our gear from the Grand Canyon, so if the fifteen mile run took two days we would be set.

During the setting of our dubious Grand Canyon shuttle, Ben saw the Poopenaut Gorge and quickly added it to the list of things to do.


Poopenaut Gorge of the Tuolumne, obscured by the smoke of forest fires. 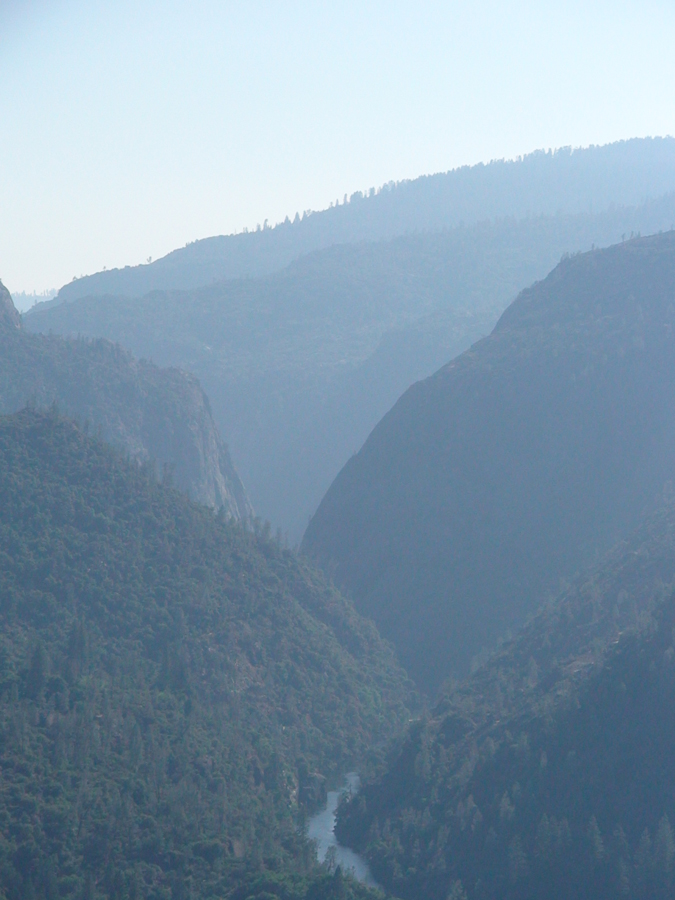 The map showed decent gradient and one major gorge before it opened up. The word of mouth beta had us in anticipation rumor of a clean thirty footer and lots of granite. Perhaps this is what helped us get up after the three hard days on the water and five hours of sleep. The Grand Canyon of the Tuolumne had gotten us in used to hiking, so we made quick work of the access road. Why the early start? This section of the Tuolumne River too is in Yosemite, and nothing is known of its legality, but it’s probably questionable, so we took an early start. 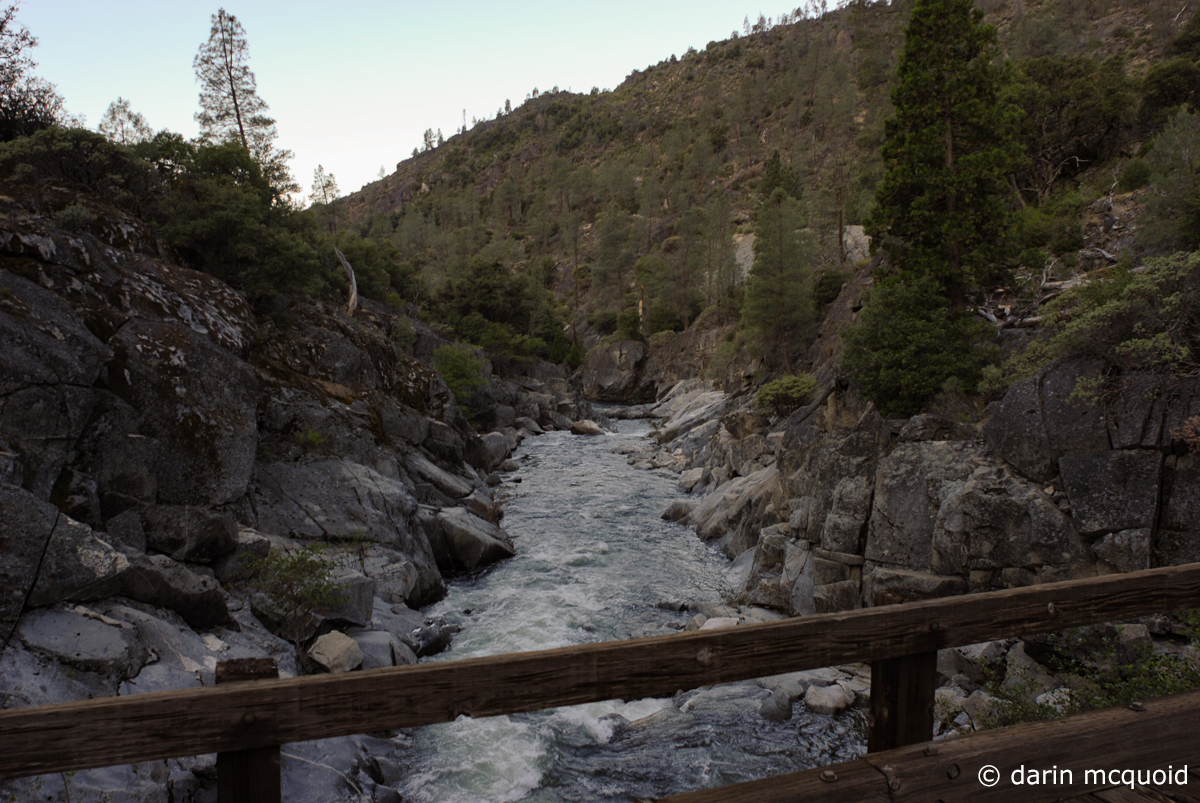 We put on with a thin 200cfs and pushed downstream, amazed at how flat the pools were. After just a few initial drops and a long lake we arrived at a large horizon line, and ran/portaged through a mini gorge, the rapids a mix of slides and sieves, setting the tone for the day. At low flows I would almost call the pools between the steep sections lakes, and after this long one we took our breakfast and a nap to catch up on sleep. 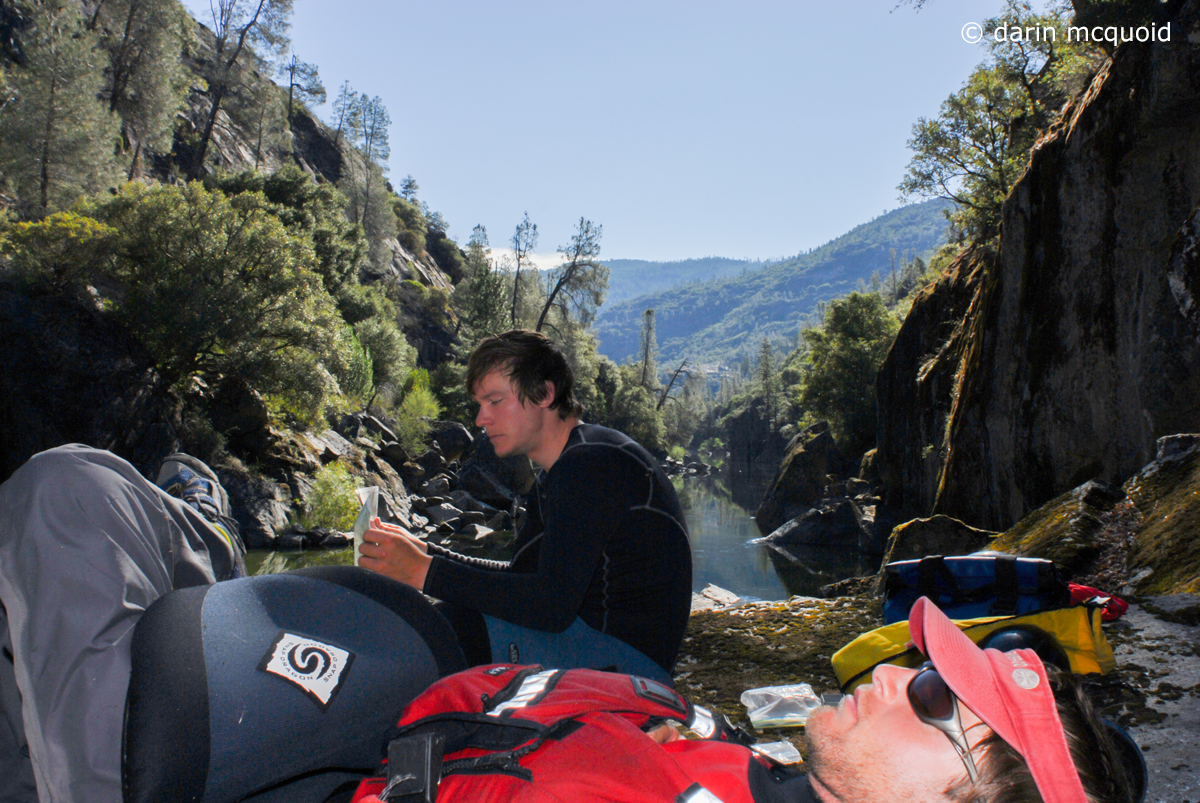 Slightly refreshed by the short R&R we put on to something we would see too much of; underground river due to large boulders. 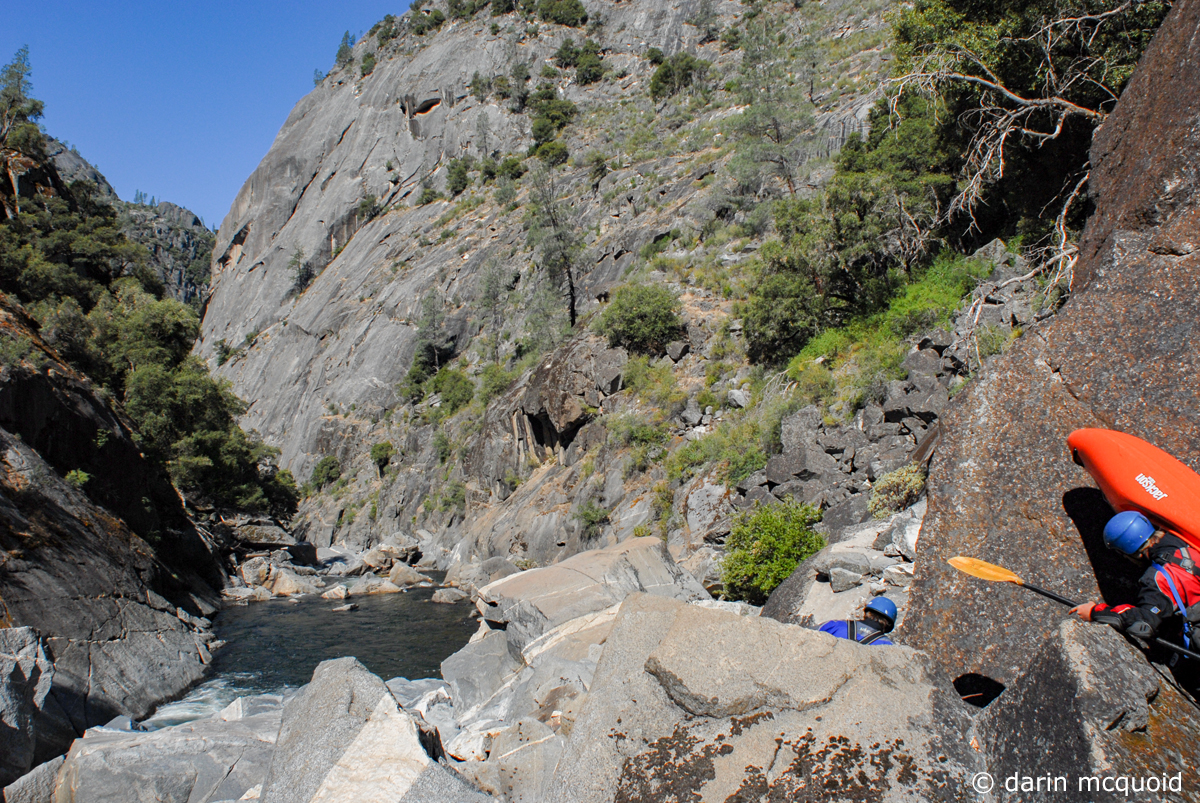 As we pushed downstream into the gorge our focus increased. Pushing into unknown gorge always contains the hazard of finding the unrunable, unportageable rapid. The river character was already dubious, and as the gorge started to tighten its belt we came upon a sketchy rapid that didn’t have any portage options. A manky boulder pile squeezing through an undercut slot too narrow for a paddler to fit through without driving up on a rock. Knowing we had no other options I ran it while Ben filmed.

The author heading into a tight spot. 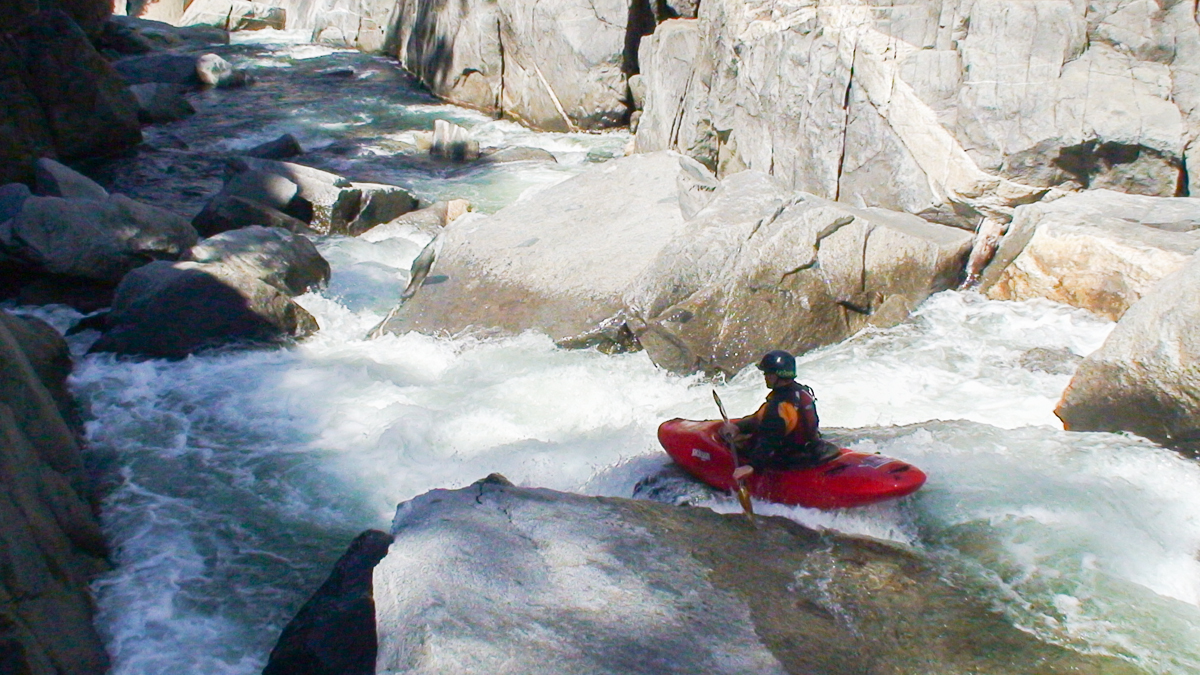 The tight gorge walls continued, with a monolith the size of a tour ship's smoke stack splitting the river. 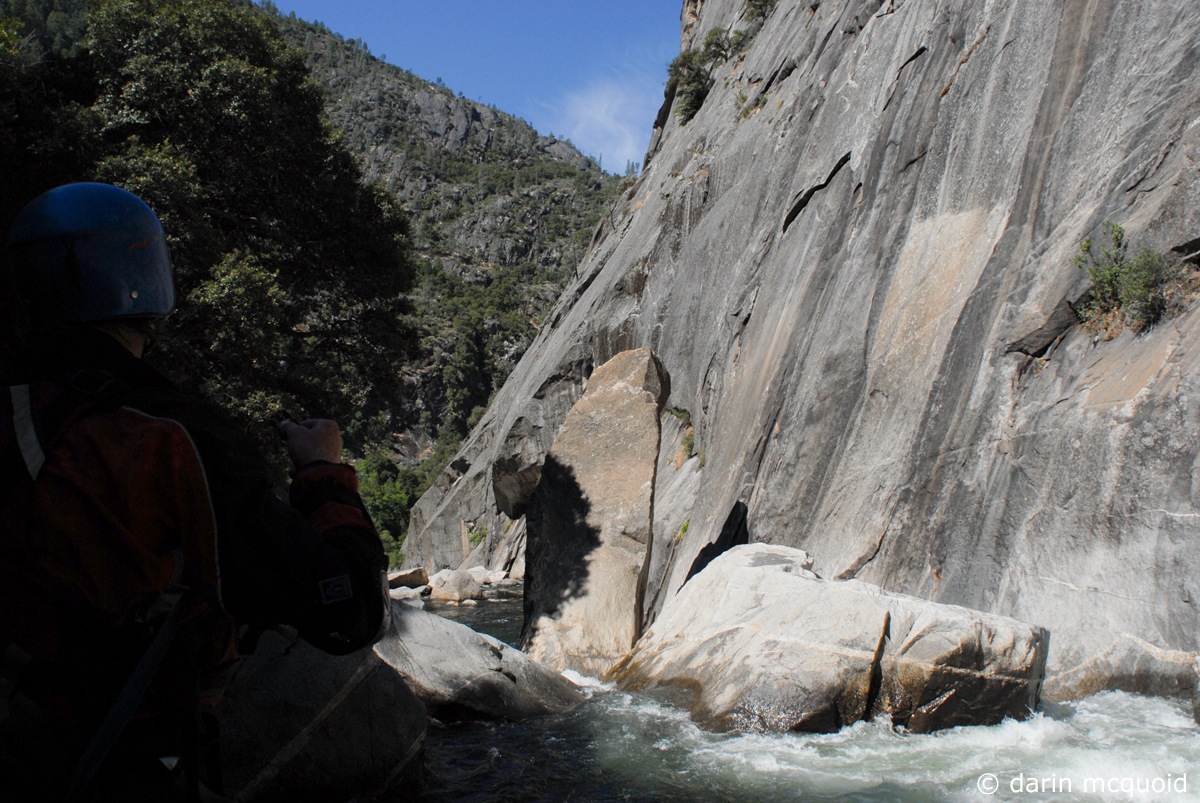 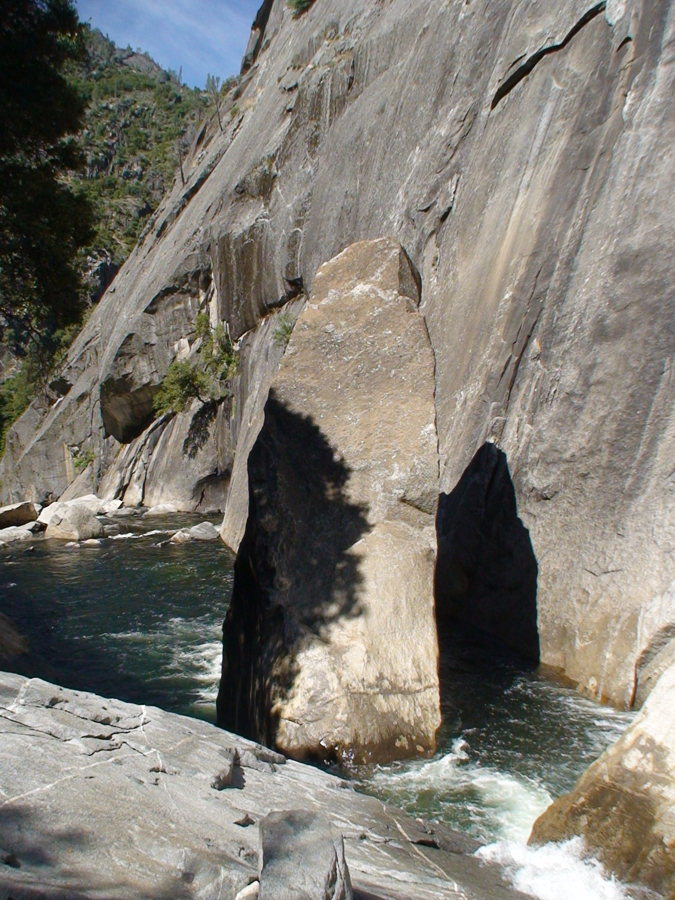 From above we couldn’t scout the right line, so we opted for a throw and go down the left, only to look back upstream and fight the right side cleaner than expected. 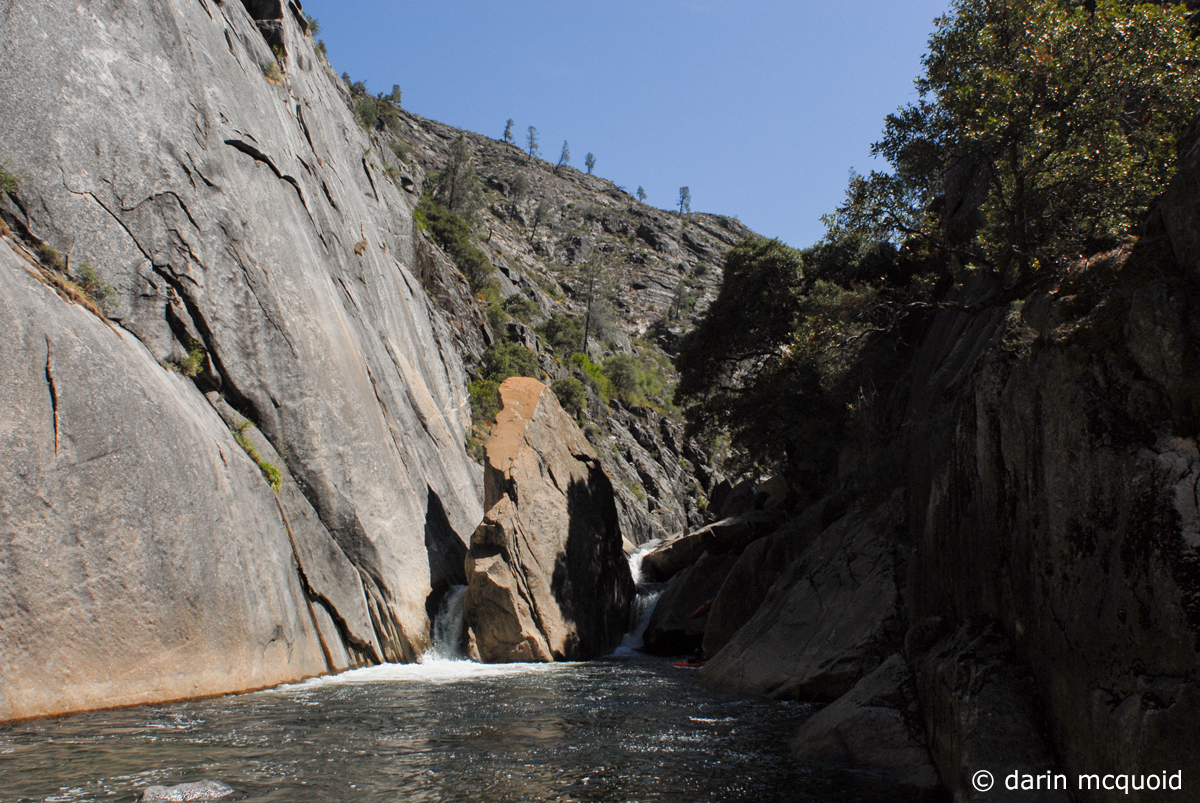 Glad to have the tight gorge behind us, the canyon opened up a little but retained its massive walls. A few slides were run and our hopes were up for quality rapids.


Chris Korbulic in the slide section. 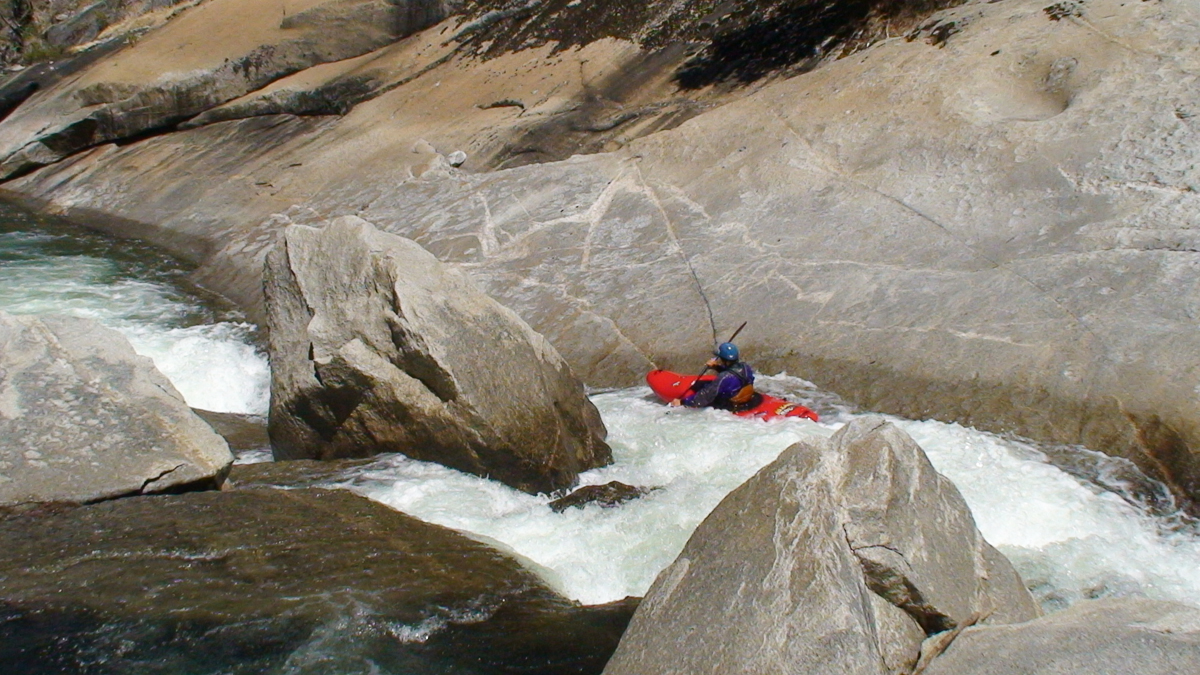 The gorge bottom of Poopenaut Gorge is similar in character to the Grand Canyon of the Tuolumne, massive walls but in generally fairly wide on the bottom. We were all pleased with how wide it was, because large chunks of rock had fallen from the walls, creating an interesting mix of rapids. A low angle slide led into house sized boulders that channeled the water up against the right wall, making two fifteen foot tiered smear moves that we couldn’t resist dubbing it “poop-smear”.


Ben Stookesberry on the first smear. 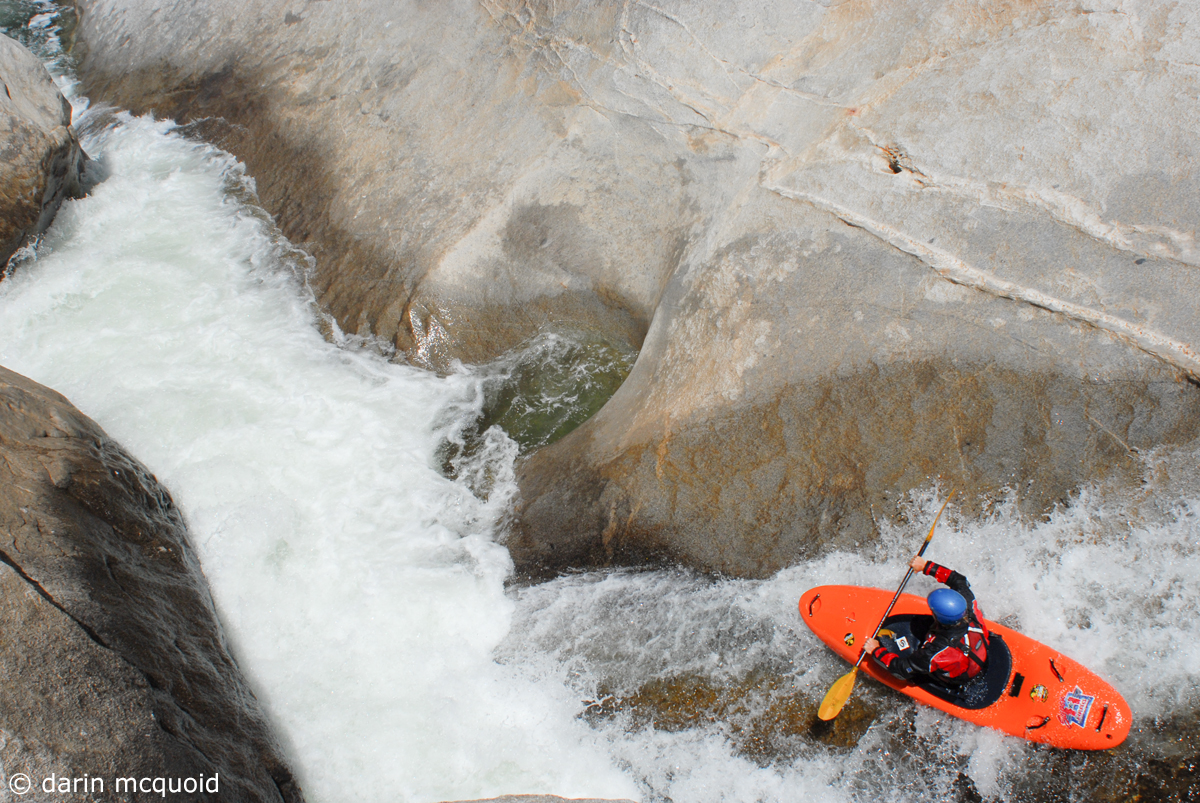 Chris Korbulic loved the smear too. 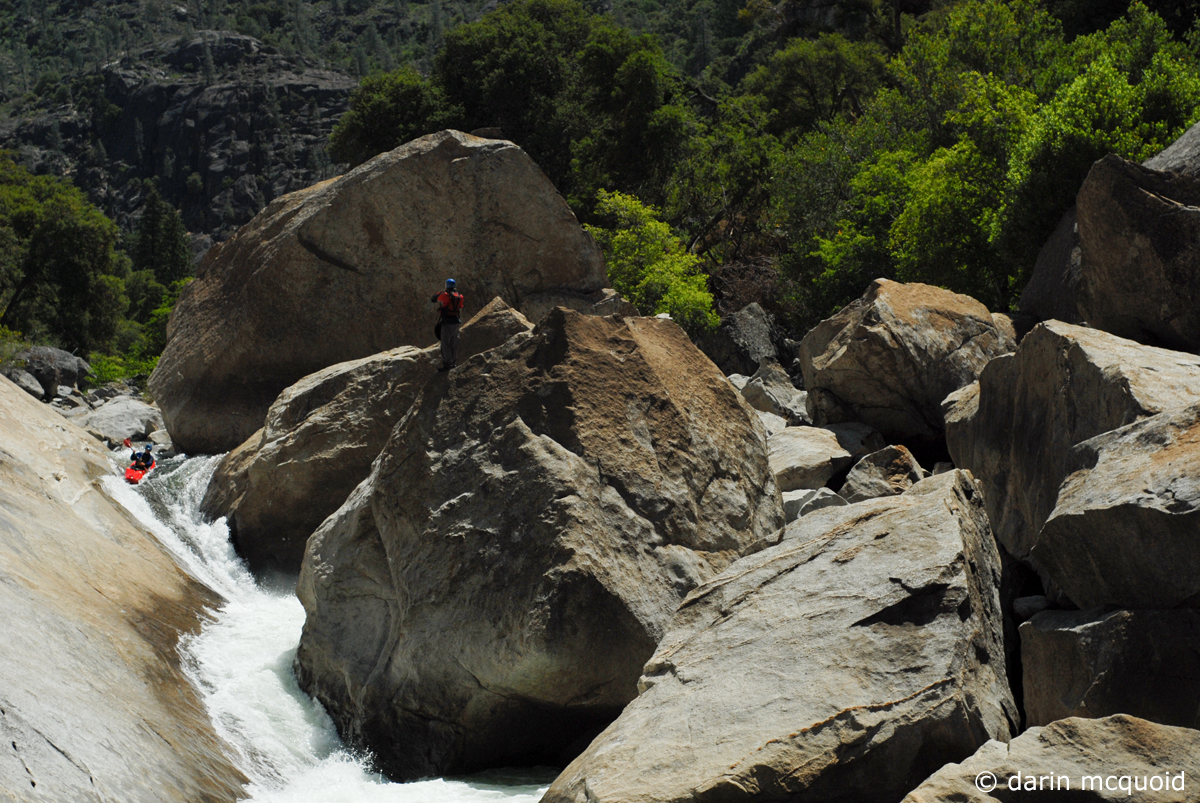 The standard rapids switched back to boulder gardens, with more portages than I would like to remember, and the occasional cleaner rapid.


The author somewhere in the mix. 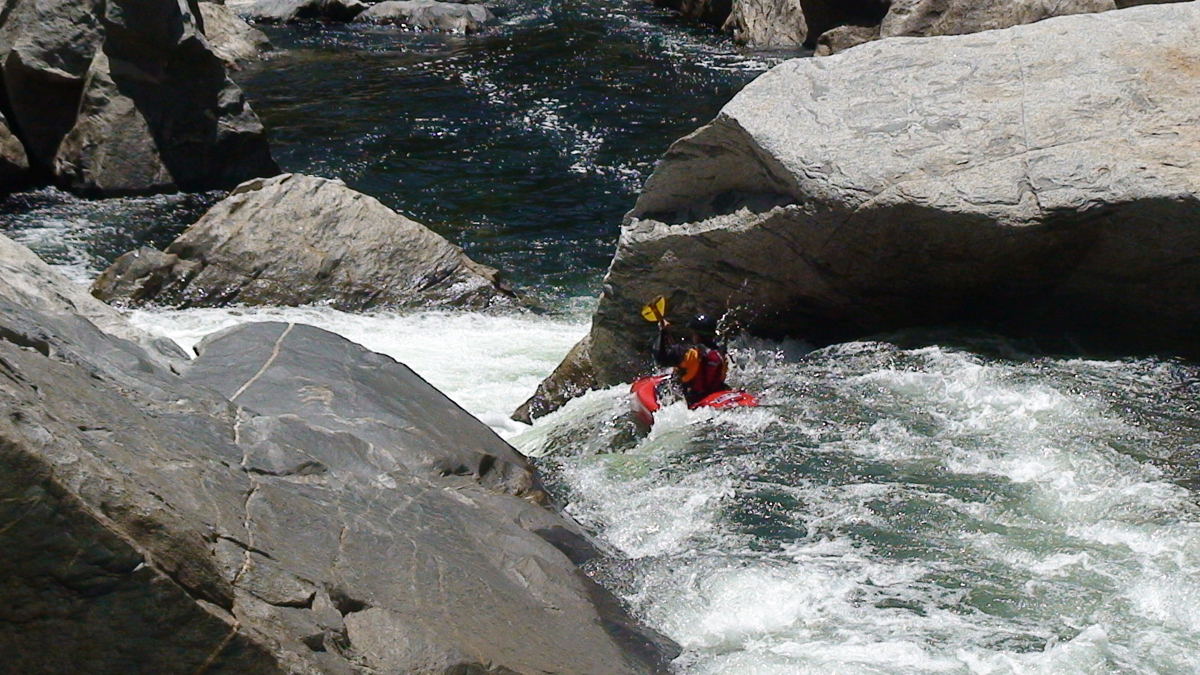 With all the boulder gardens we were starting to lose faith, but hope was renewed as more bedrock appeared.


Chris Korbulic, laundry master, handles the fold with no problem. 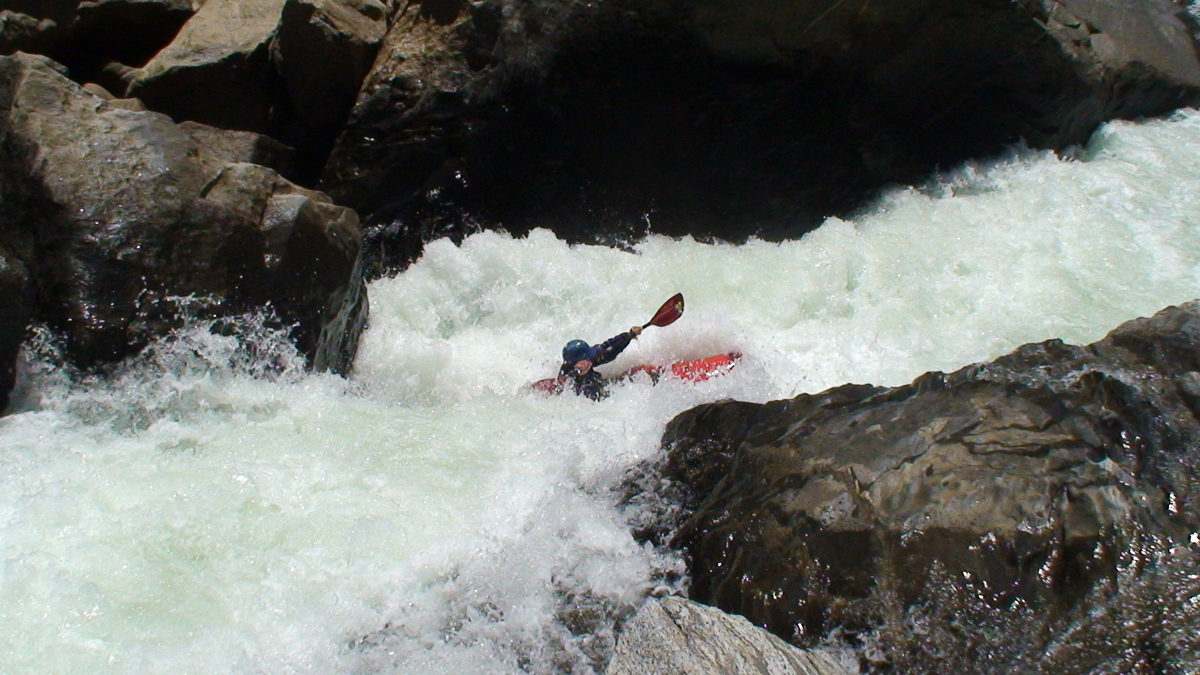 As we paddled across another lake, we were excited to see serious gradient loss in a mini gorge, scouted and took lunch. It wasn’t a thirty footer, but a nice long entry rapid led into a photogenic pothole boof.


The author running the entrance. 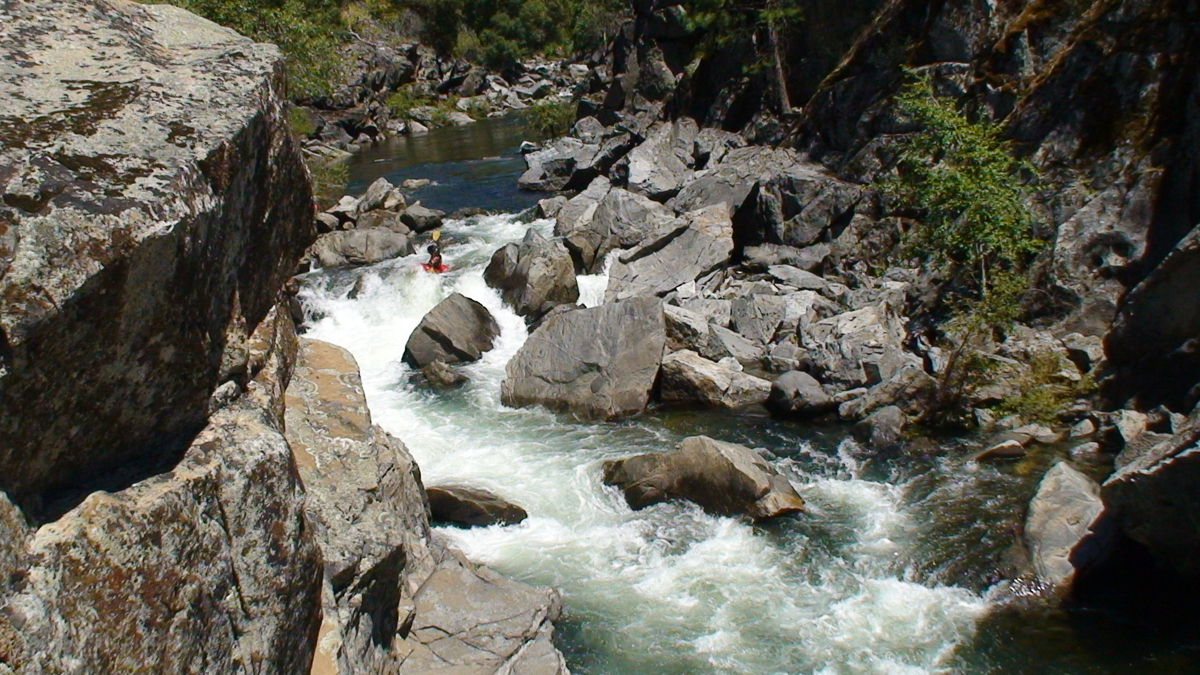 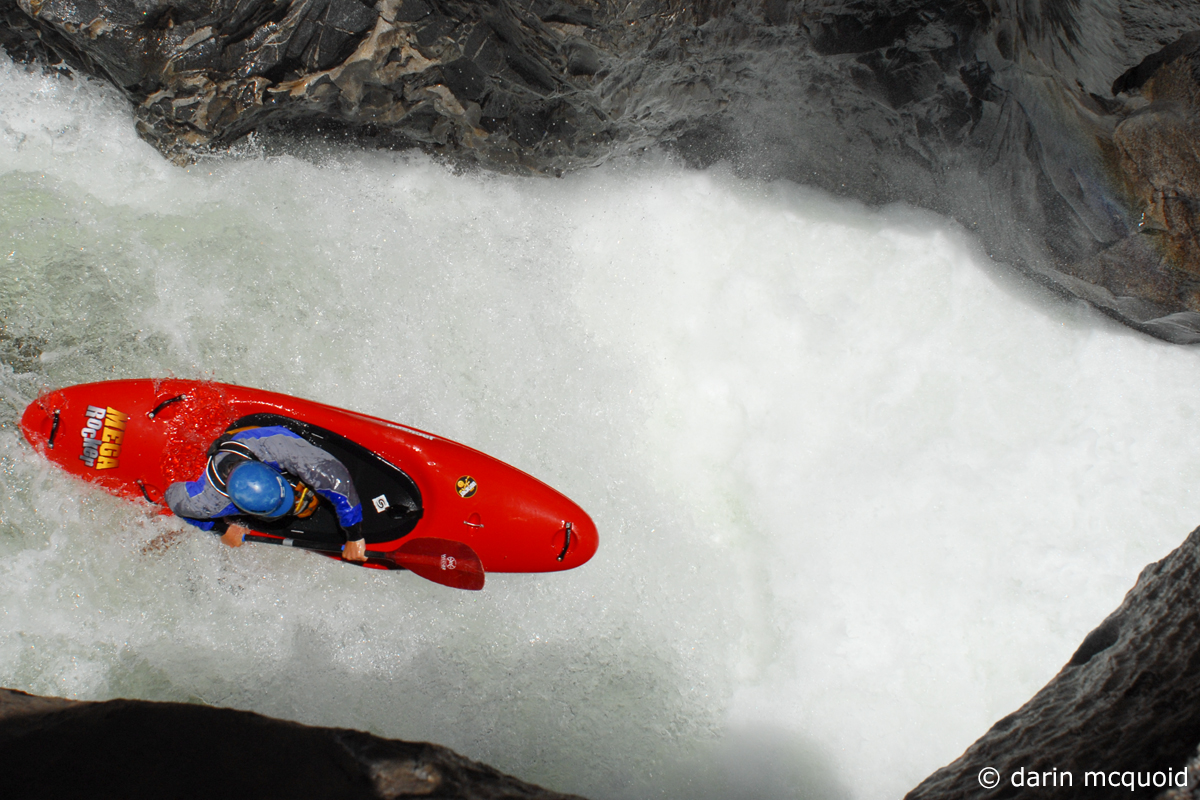 The pothole drop raised hopes again, and the lake to rapid bedrock character maintained for a several more drops, one that had a long lead in to a nice twenty footer.


Chris Korbulic enjoying the better side of Poopenaut Gorge. 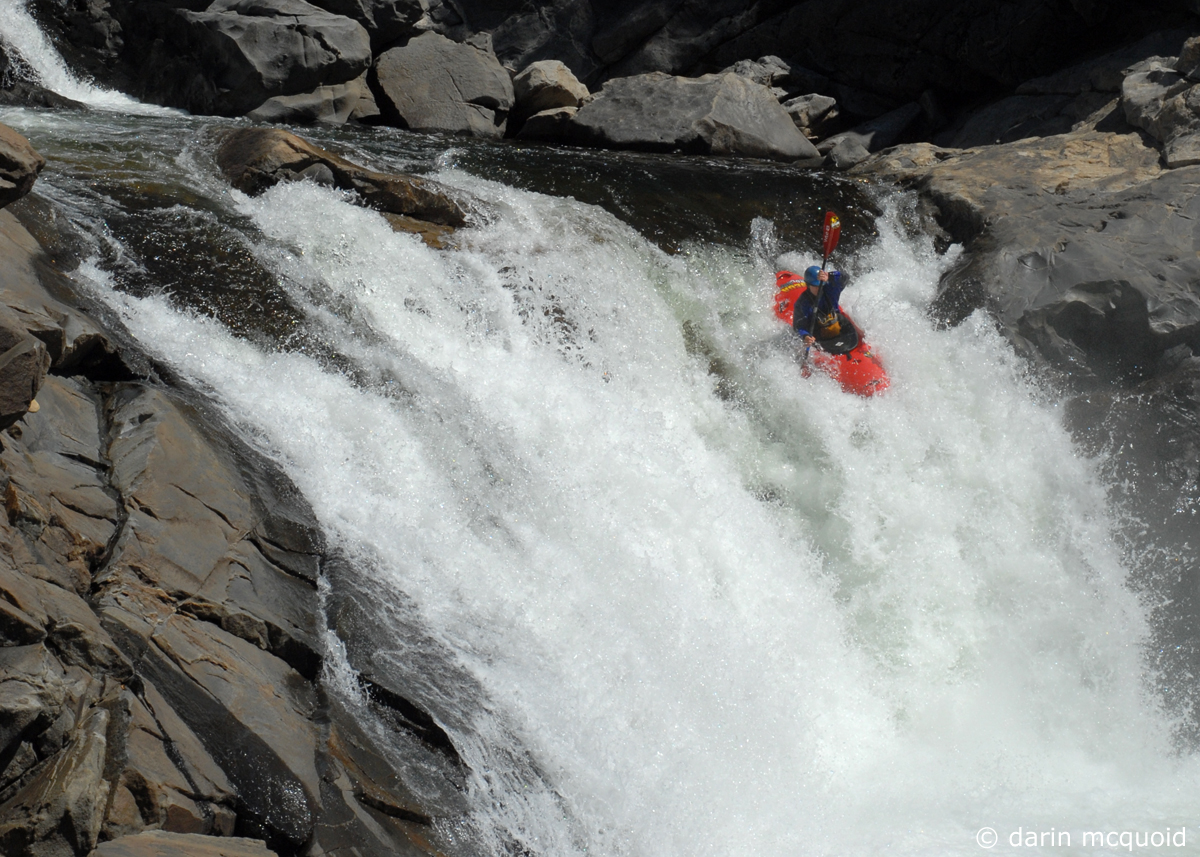 Not knowing how much further we had to go, we hurried through this section and didn’t take much time for photos or video, getting out simply for posterity’s sake. 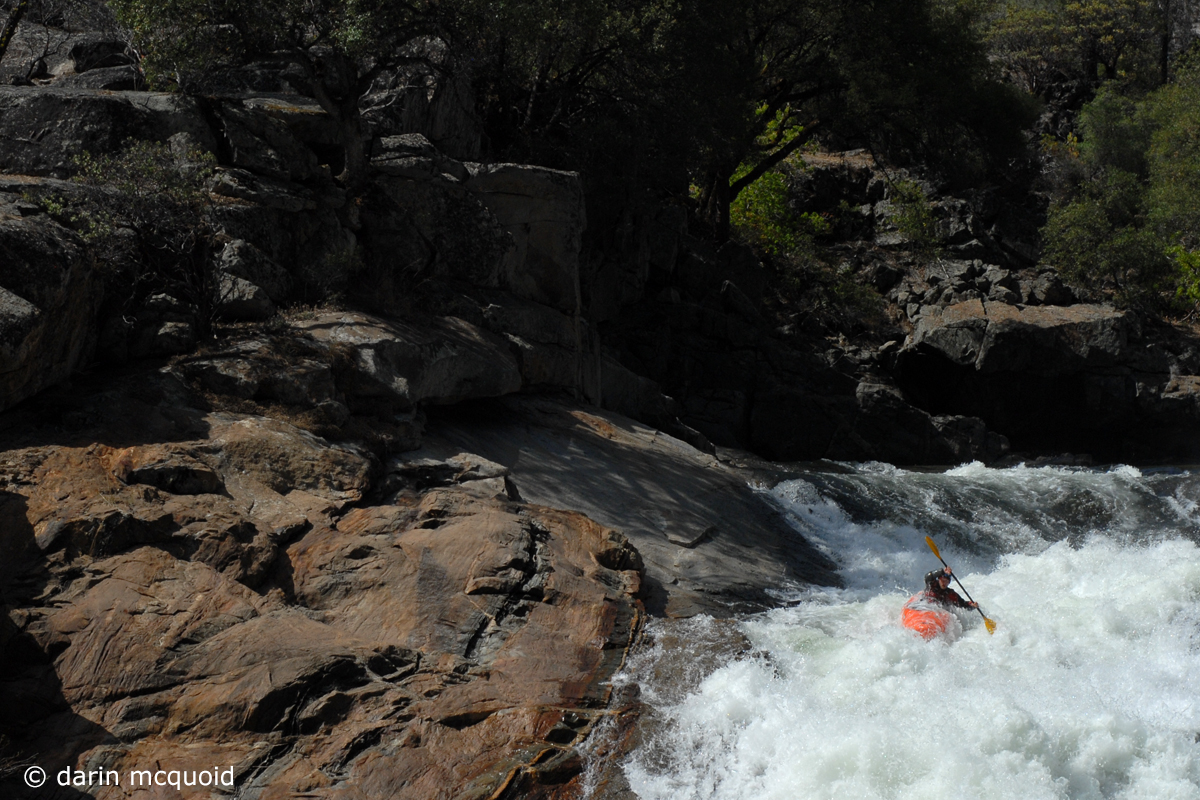 Suddenly the walls were gone, and we were cruising mellow class II with the occasional mank pile thrown in. Where was the thirty footer? Like most rumors of large, clean waterfalls, this one was simply a rumor. While we were all glad to have done, and be done with this section of river, I don’t think any of us will return. I’d consider every run worth doing once, and although this run does rate higher than others, it’s by no means a classic.

Flows are nearly impossible to gauge, a little more water would have been nice, but I wouldn’t go back with too much more. Use the Tuolumne below Hetch Hetchy Gauge.