The Scott River has been a long time backyard run, and at low water was the first “IV-V” run I did. I put IV-V in quotes because those are rafting ratings, generally a bit over-rated for kayaks. I got a call in the morning from Devin Knight inviting me to join him and Sean Malle for a run down the Scott. I thought it sounded great as the flows were high and who can turn down another day of kayaking? 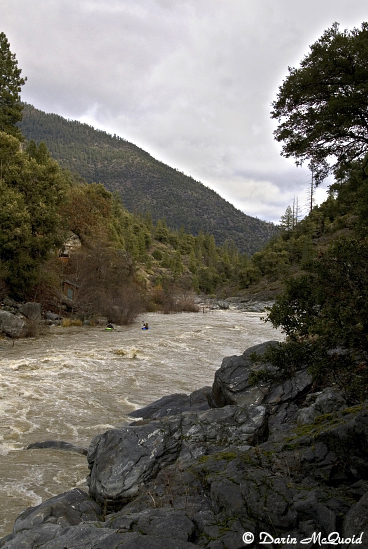 The Scott River is a unique river for California. It drains the west side of the Marble and Russian Wilderness areas, while the Cal-Salmon drains the east side. Unlike the Cal-Salmon the Scott River drops out of the wilderness and proceeds to meander for twenty plus miles through the beautiful Scott Valley, which somehow escaped the profuse construction of dams on anything remotely offering the opportunity. Post meandering in the valley, Scott River drops into a canyon for thirty miles until it’s confluence with the Klamath River.


Once we hit the canyon section of the drive excitement went up as we saw that the Scott was over its banks in the valley, but right up to the top of the riverbed in the canyon. The gauge at Fort Jones was reporting 4,300 at Fort Jones, and the river was gaining at least 1,000cfs more from several major tributaries before the run. This put flows at over 5,000, a good 2,000cfs above the normal recommended levels. We had all run the Scott before, with my personal previous high flow a fun 1,500 and Devin with a high flow of 3,000 or so. We were curious to see how it would look from the shuttle road, and while it looked big and pushy, it also looked very manageable.


I won’t go into too much detail as this run is described in detail by superb write-ups that will be listed later. We made quick time through big pushy water down to White House, which was completely washed out big had a massive wave instead of the normal hole. 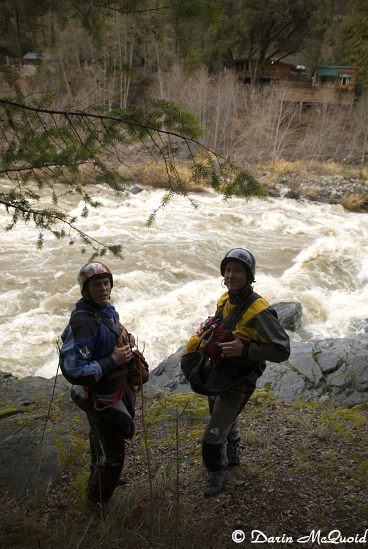 Devin Knight melting through a wave on White House rapid of the Scott River. 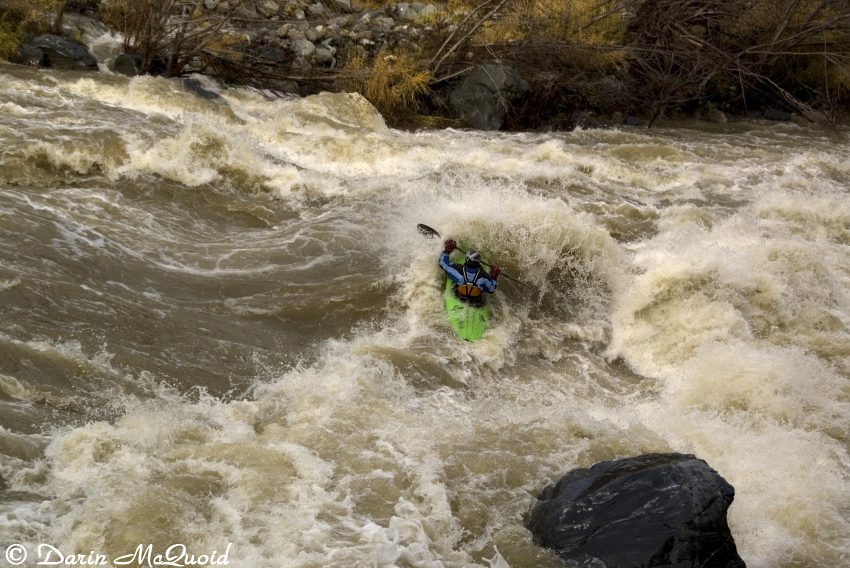 Sean Malle was following close but got pushed a bit too far right and got caught by a lateral. 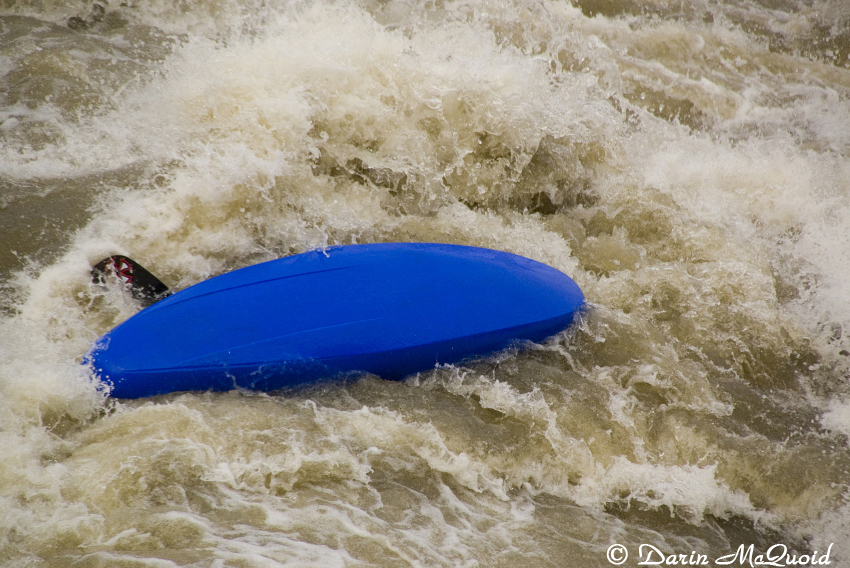 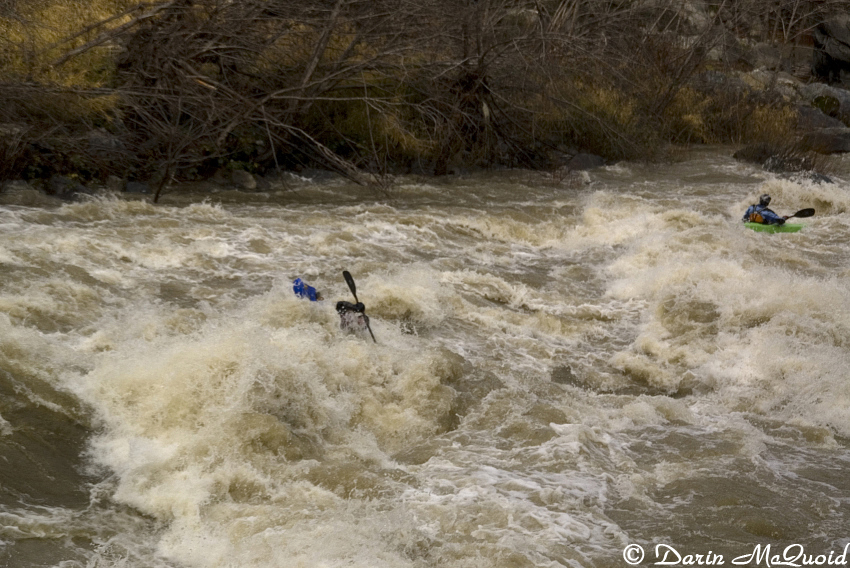 Three miles of big wave train boogie water followed until we were at “Schulers Gulch” rapid, rated V by rafters and at normal flows a V- for kayakers, and at 5,000cfs we thought it was harder than anything the Cal-Salmon or Burnt Ranch had to offer at high flows. Big waves and holes pushed into the undercut rock/sieve combination, and instead of a mellow ramp through the gateway rocks we found a big stomping hole. 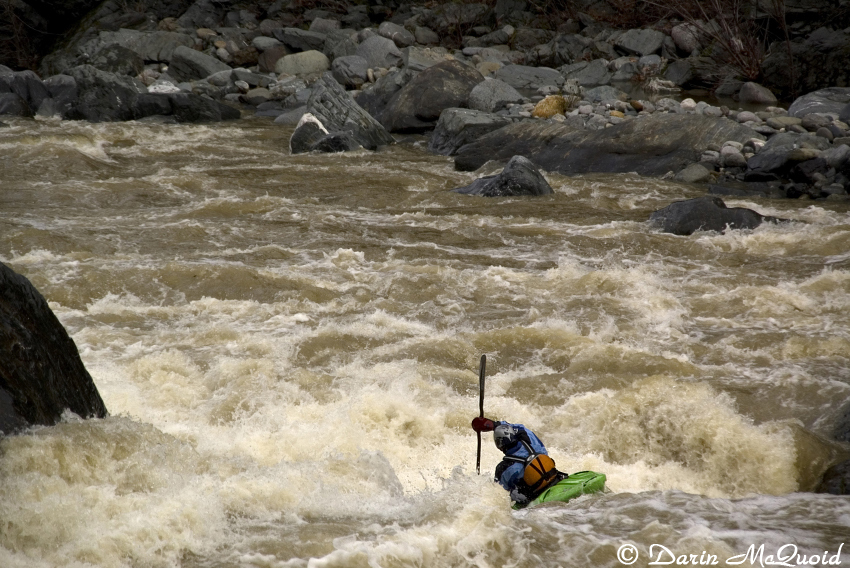 This is about 5% of the whole rapid, it’s a big long affair that simply can’t be captured by camera at river level. It had about fifty yards leading into this spot, and another hundred and fifty yards of stout rapids downstream. So fun to run something with five or more mandatory moves!


Sean Malle lining up the hole. 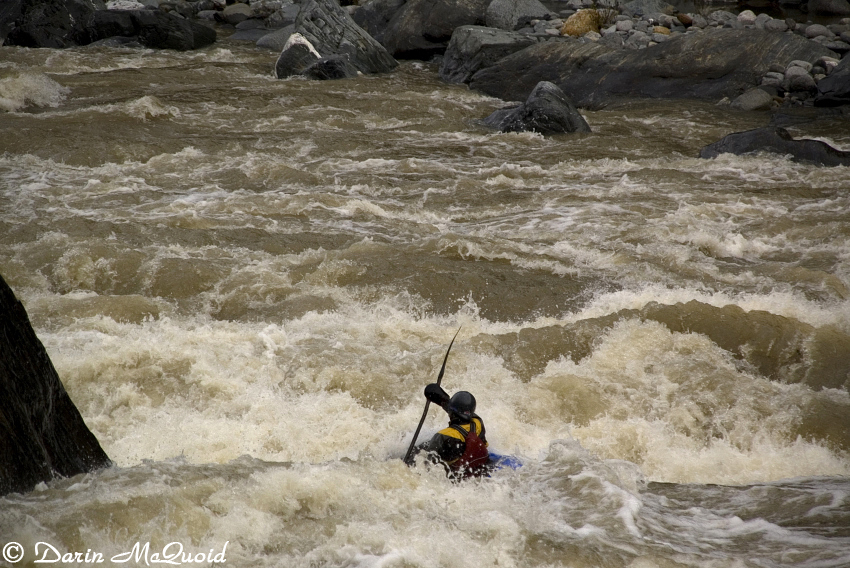 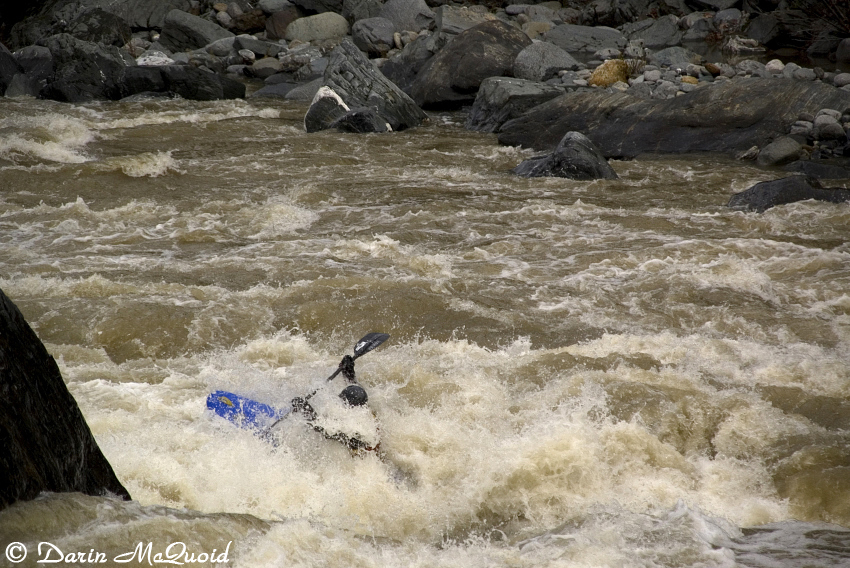 The Scott normally has one more IV after Schulers, and then a long II-III paddle out that was super fun at high flows with overhead wave trains everywhere. 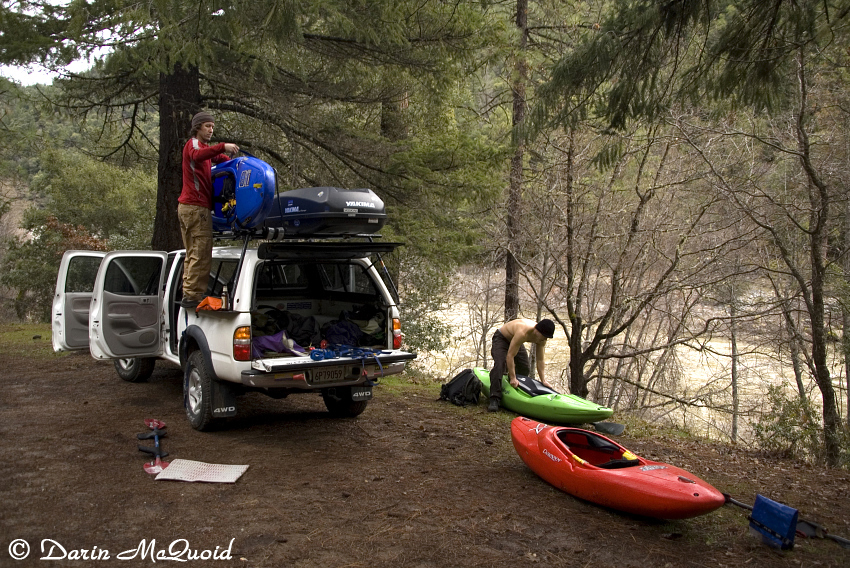 If you are a class V boater and in the Northern California area, and the Scott is at an unusual flow above 3,500 I would consider it a must do, and at 5,000 is the most fun I have had on a river in a long time.

Superb detailed write-ups of the Scott River are online at Oregon Kayaking and California Creeks. The majority of the run is roadside. Keep your eyes peeled for one unusually large rapid early on that you may want to put in below (or above) depending on your mood. Take out requires either a four wheel drive vehicle to access an unmarked but legal take out above Scott Bar. The other option is to take out a ways below town, as locals are not friendly to kayakers who wish to take out at the bridge in town.