South Fork Kaweah
Upper Section
v
The South Fork Kaweah is different  from the other forks. While the Middle and North Fork drop relentlessly from high peaks, the South Fork is the smallest watershed of the three, meandering out of Sand Meadow and Hockett Lakes at only 8,500'. Briefly flowing north, the river makes a sudden west turn and in sixteen miles it drops to join the main Kaweah just above Terminous Reservoir. For whitewater kayaking it's the least known of the three  forks. That's due to several issues. There is no gauge on the South Fork, and flows at the confluence do not reflect river levels upstream; there are a many diversions for agriculture. While it often looks low at the confluence there is often enough water higher up.

Access is the other issue. The lower run has pretty straightforward access, a new bridge at put-in has ample parking and easy access, and takeout is ok even if fences are illegaly attached to the county bridge. On the upper section it's a whole different story. Theoreticly one can take out at the standard run's put-in. We'll get into why that does not happen later

One a fine day in mid May we decide to do the standard run.

Rok Sribar heads into the "living gorge" of the South Kaweah. 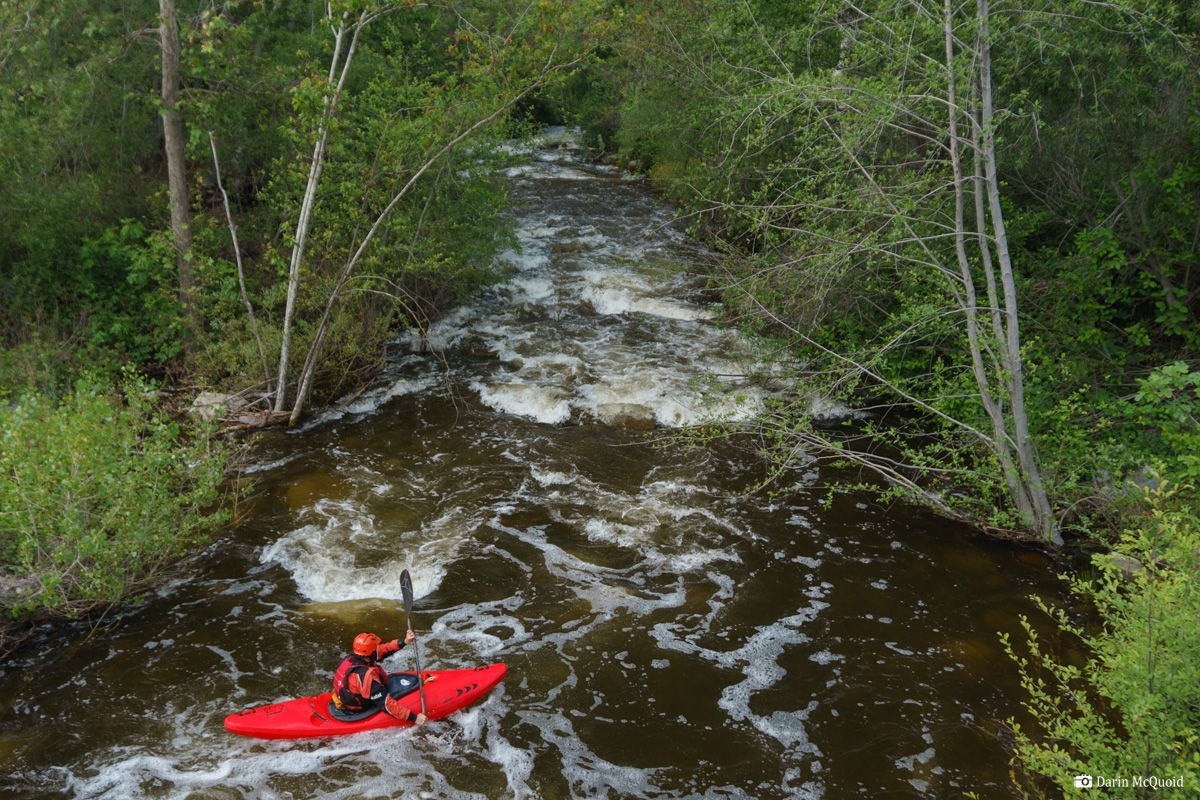 The South Fork Kaweah is not pool-drop. It tends to be non-stop and very brushy on the sides. We didn't get out for photographs while on the standard run and the two mile section took us thirty minutes, and that's with one scout. Done so early we decided why not give the upper a go too? Rok had done it a couple times in years past. We head back to town, grab lunch, relax, and end up putting on around 4:00pm. If you'd like to see a top to bottom video of the standard run just click on the link here. 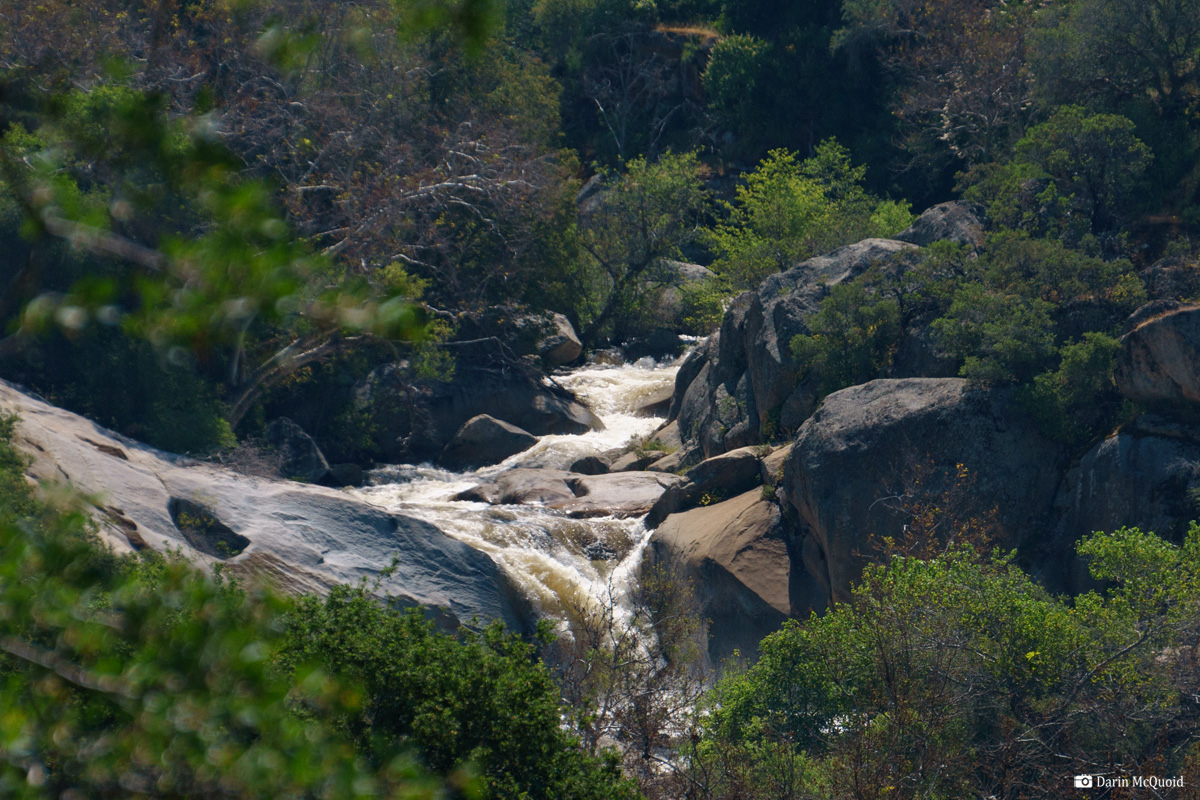 A river canyon that at times can be quite deep, yet rather rural with houses beside the river the whole way. 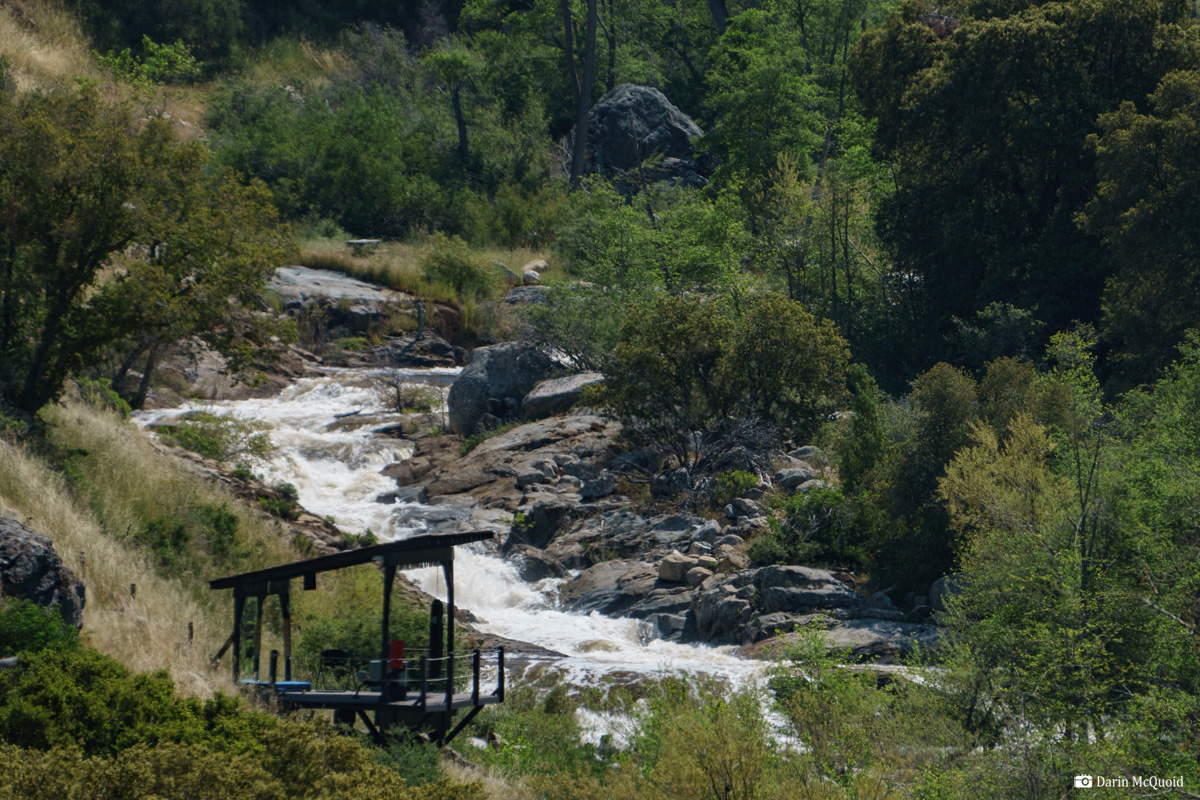 Rok kind of remembers where put-in is, yet I insist on going further upstream to where I saw some good looking slides and easier access. We start with some serious brush boating and a quick portage, to emerge onto some action packed slides next to a house.


Rok Sribar in the first series of slides. 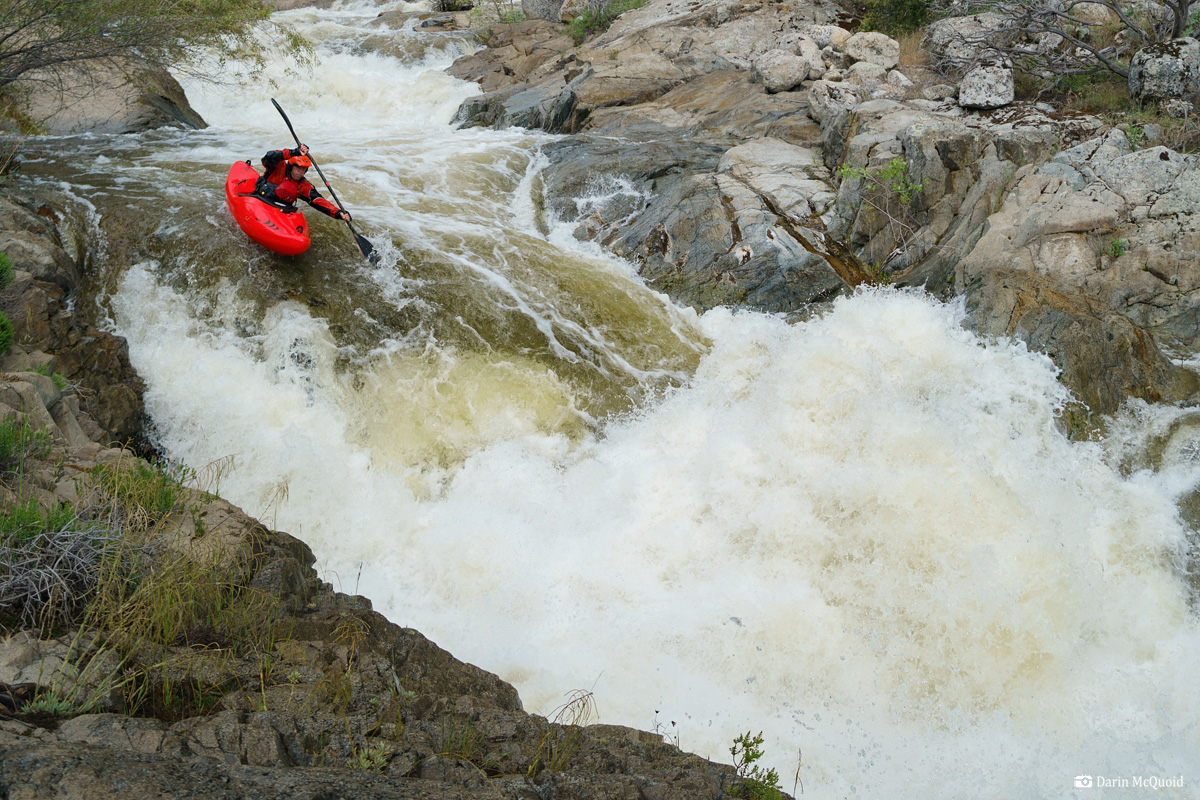 We're just not used to houses right next to the river, especially on something this steep. Rok catches an eddy above a patio. 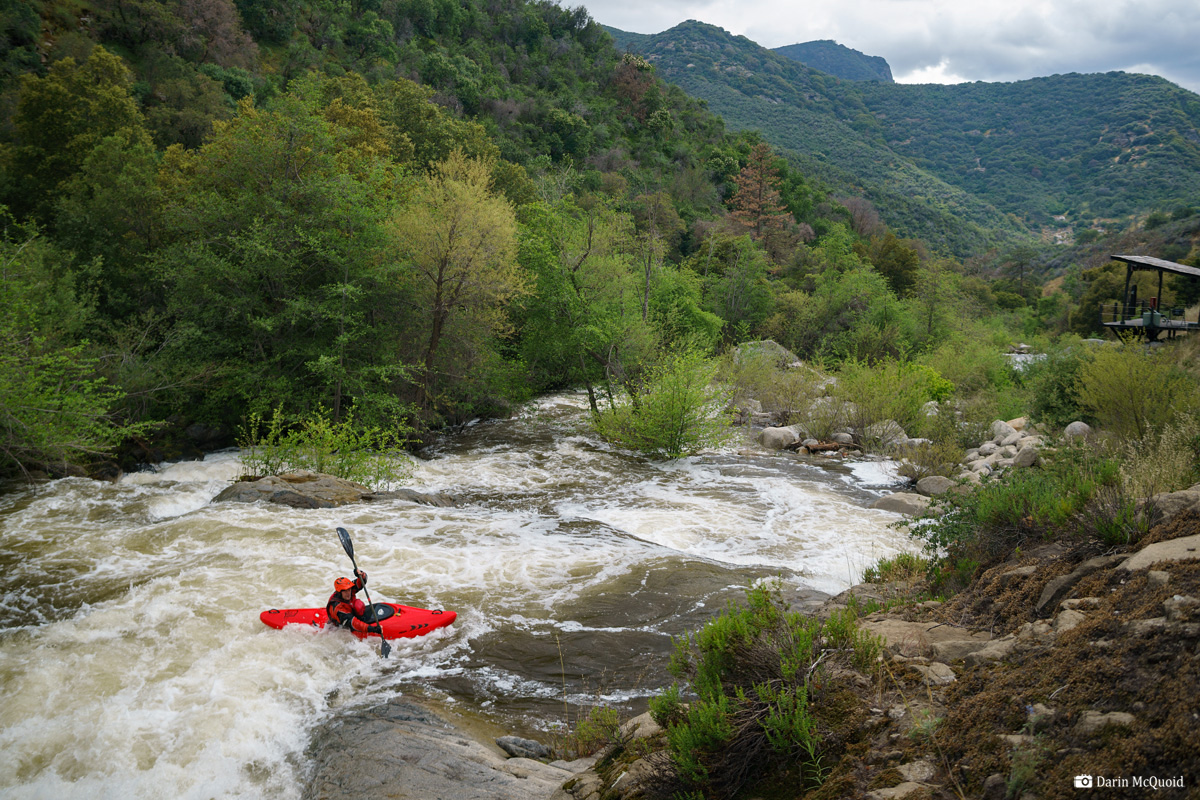 The brush is painfully thick up here. The whitewater would be plenty challenging without it, and now that bushes block every view it's a unique experience.

Due to visibity issues I portage down to a nice slide and wait while Rok and Gavin scout and paddle their way down. 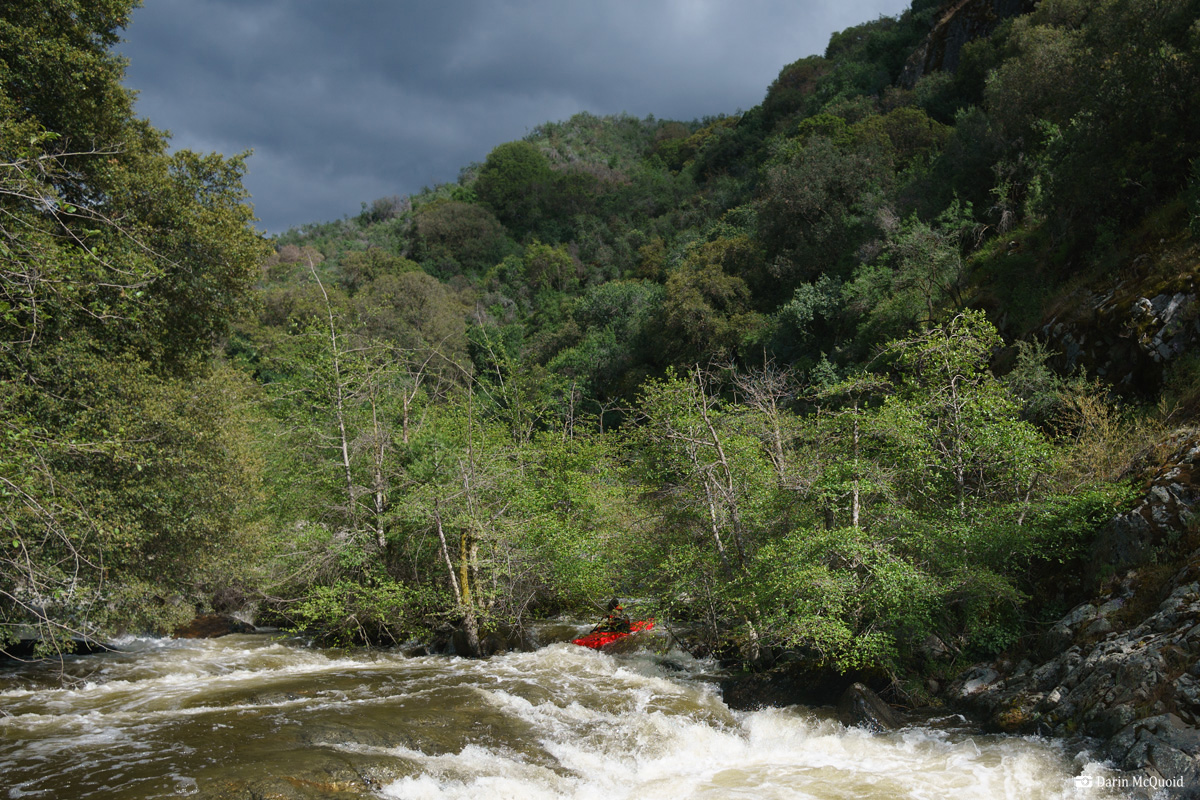 As a reward we find a nice steep slide hidden from the road's view. 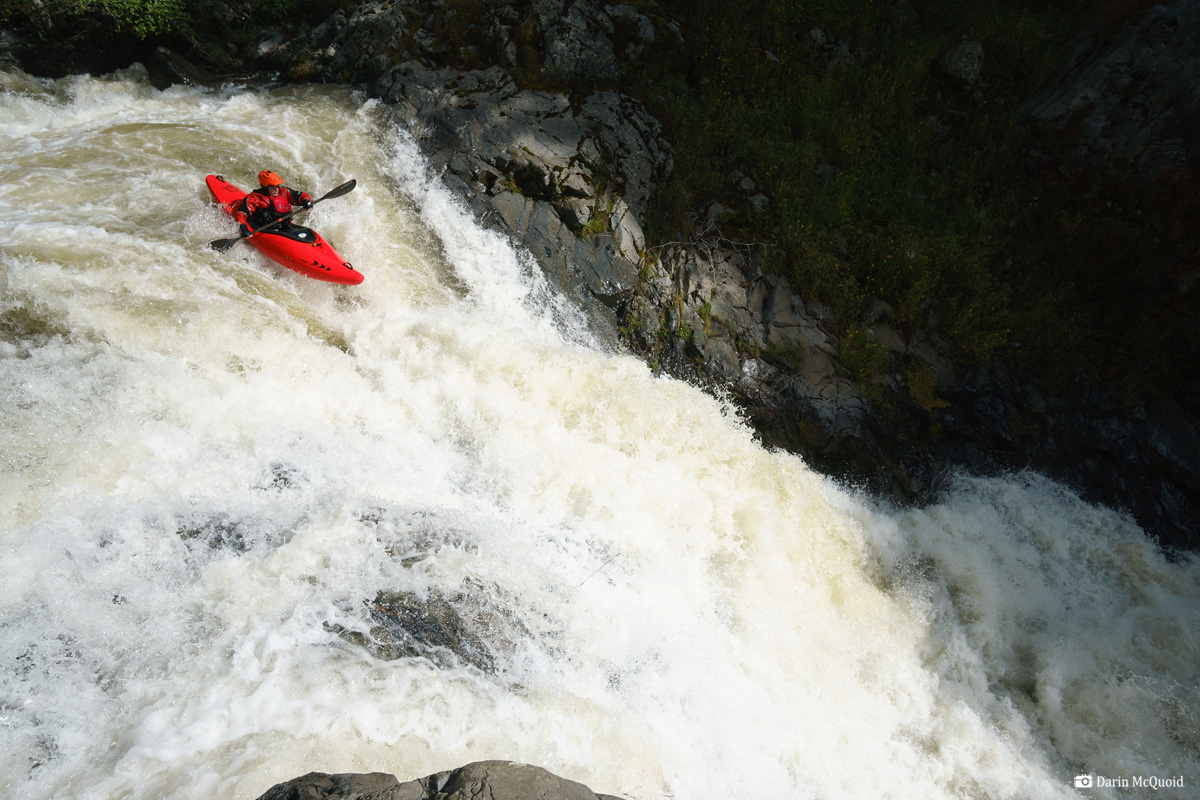 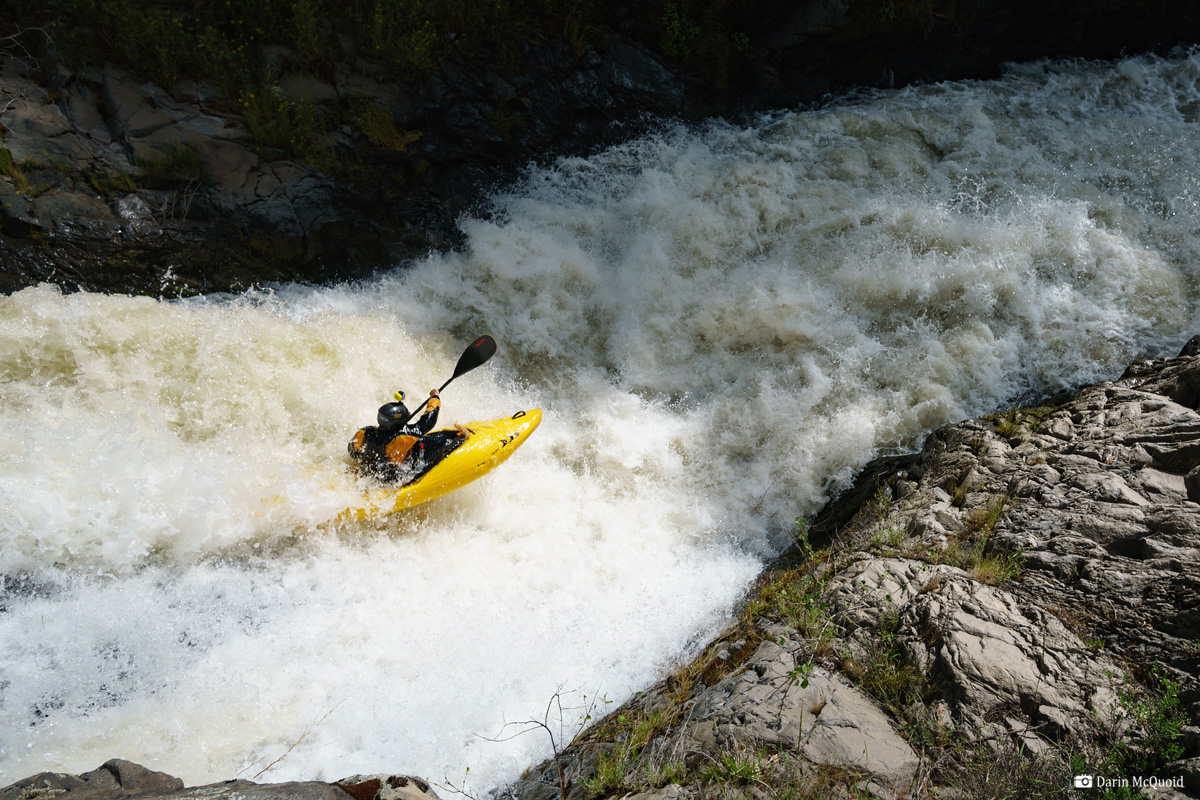 Downstream we are happy to find the quality continuing with more slides. 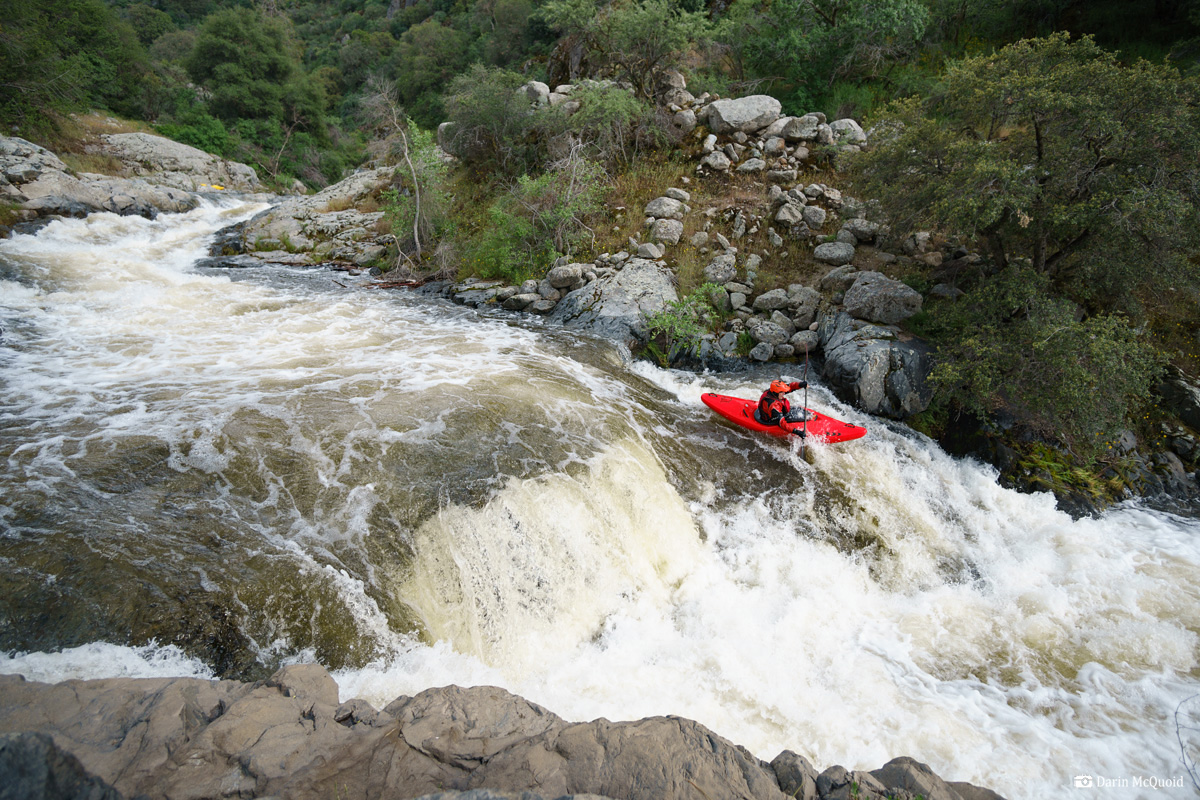 These slides and sandwitched between brushy boulder gardens which take inordinate amounts of time to scout. 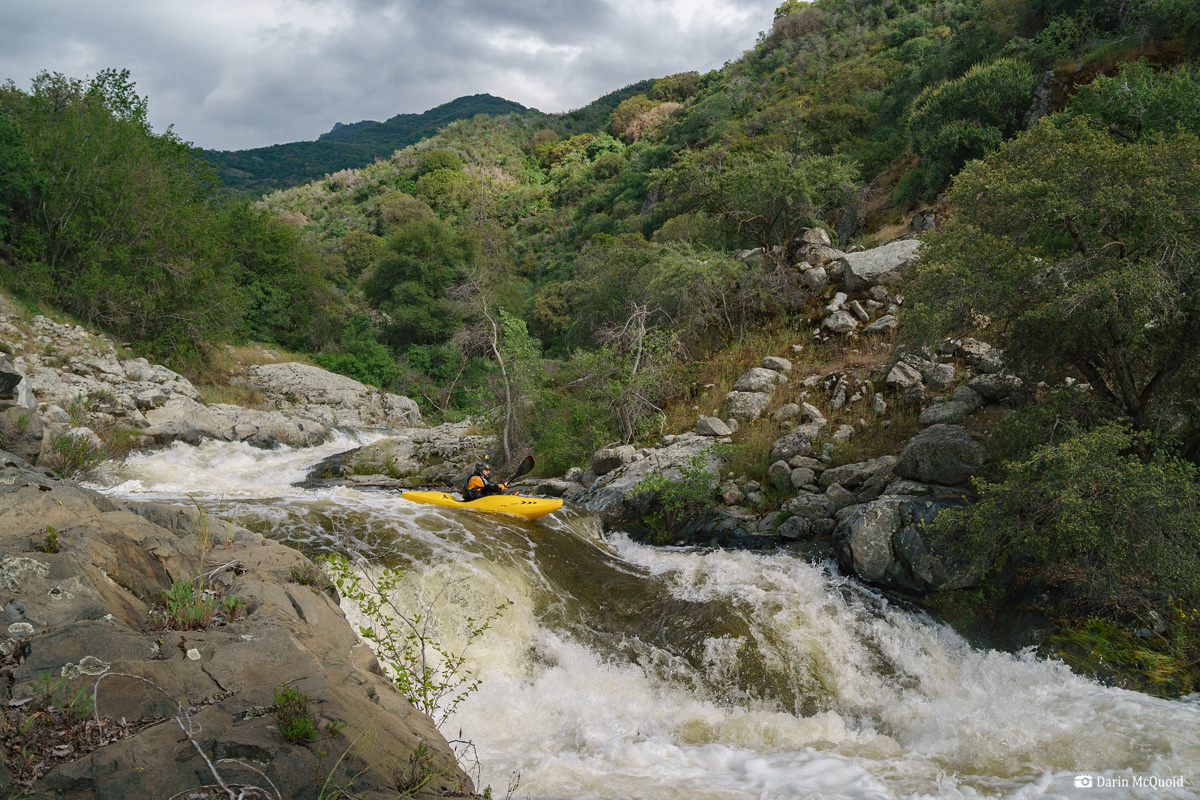 It's nearly five in the afternoon and we've just made it to the normal put-in for the upper section. Too late to continue on, we decide to take out. 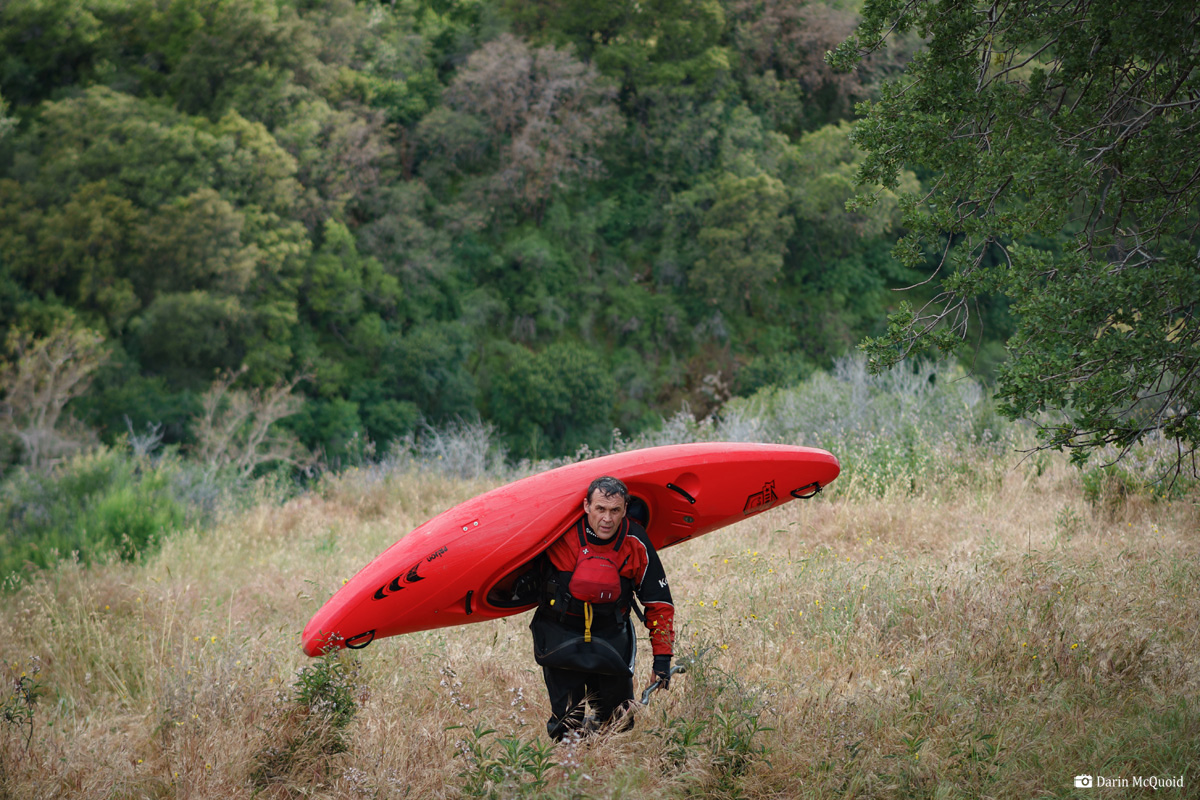 
A few days later and Rok comes back back to finish what we started. 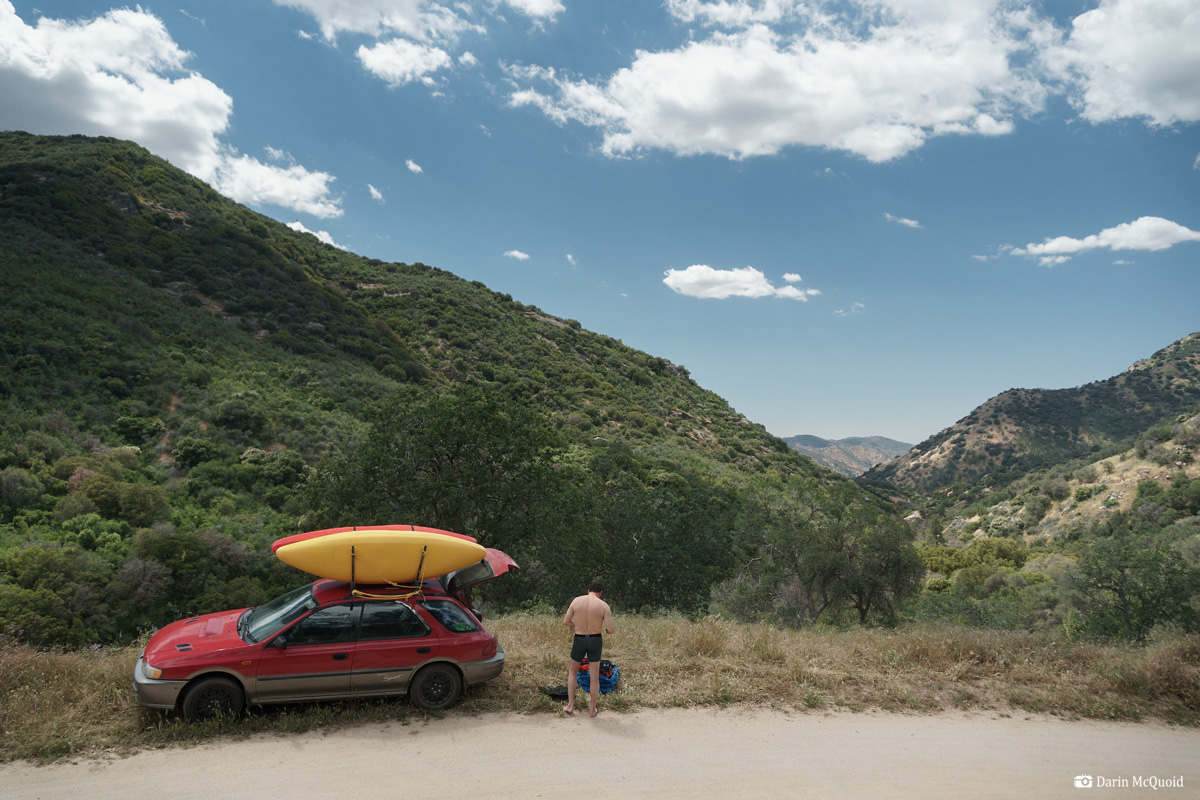 Flows are a touch lower, which is better because the first mile falls away at 375fpm and has no portages. 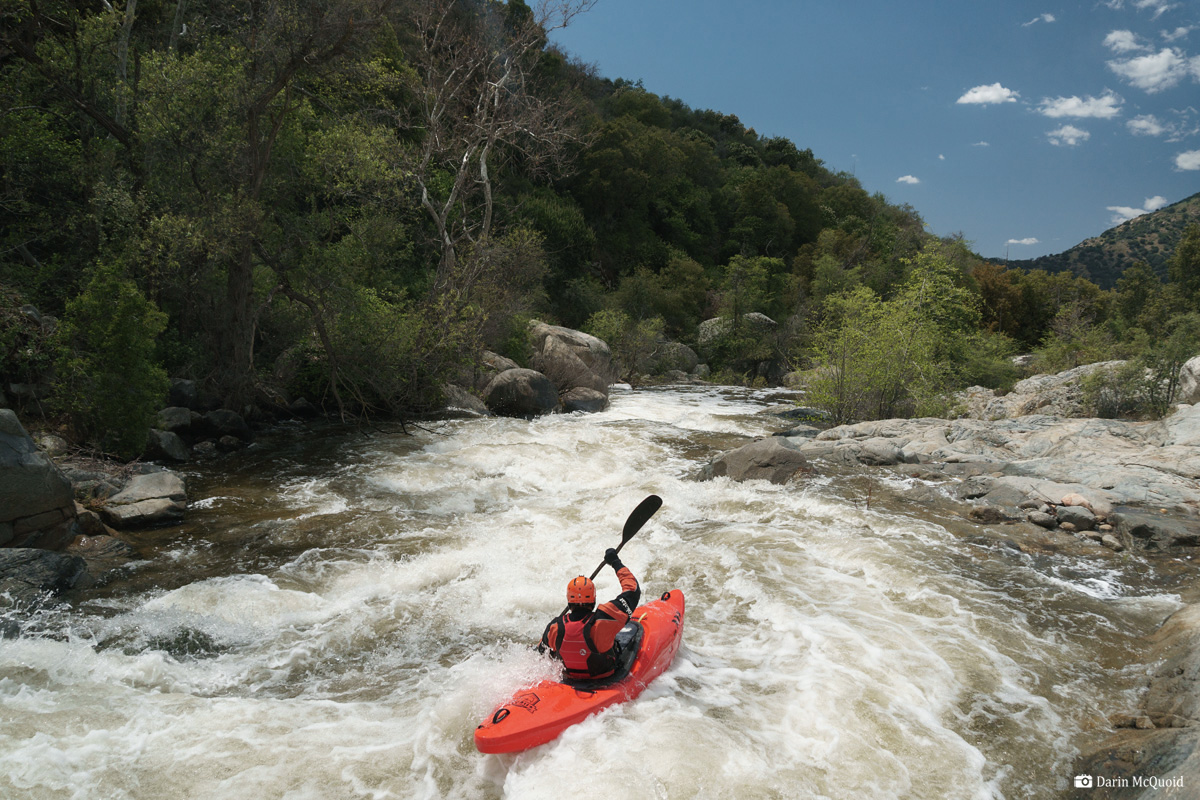 Water is always brown due to the lakes high above. 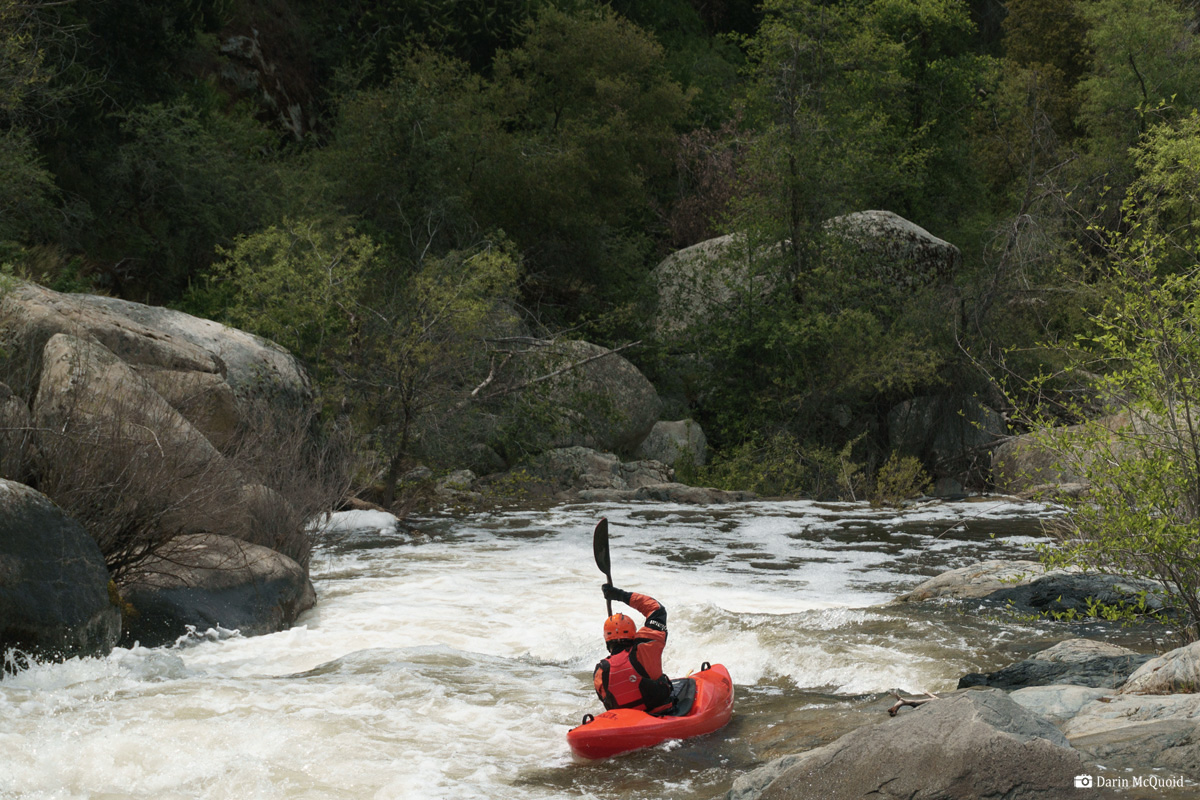 The character of the riverbed is fantastic and frusterating; every time we eddy out bushes and branches are trying to steal the paddles. 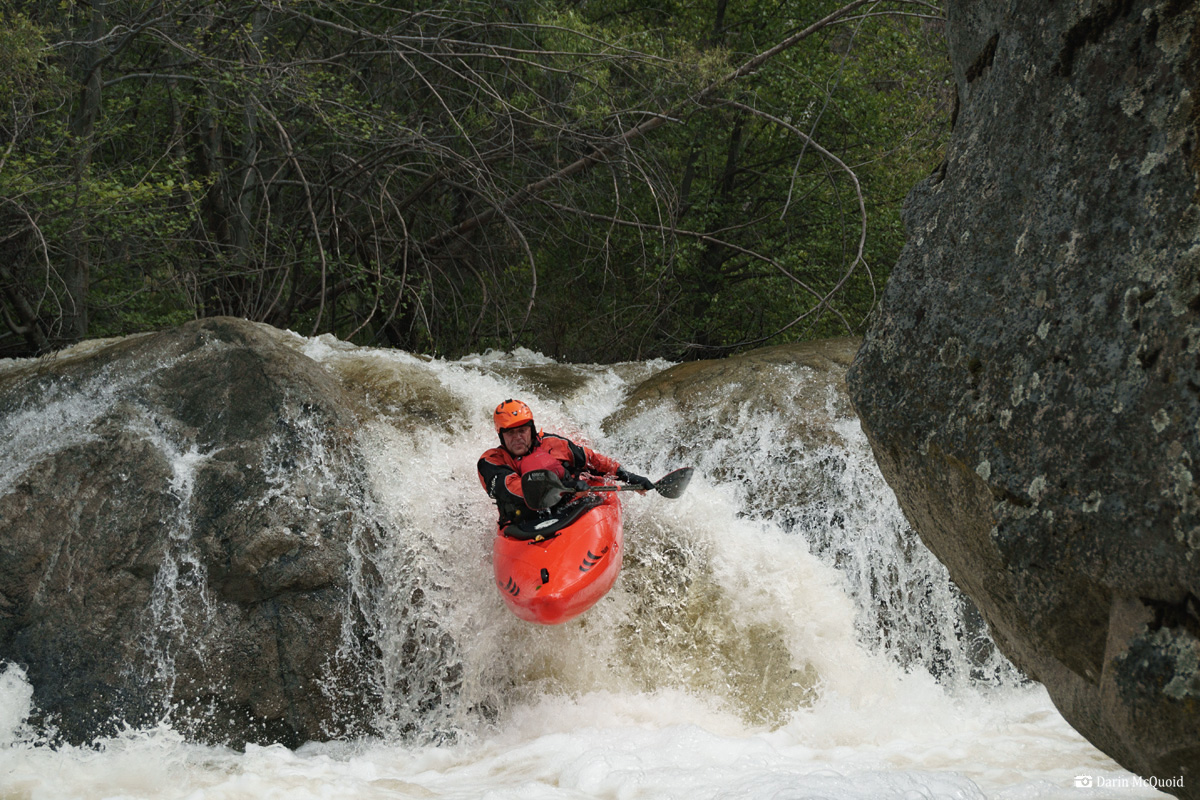 It's not all glory though, some of the boulder gardens define mank. 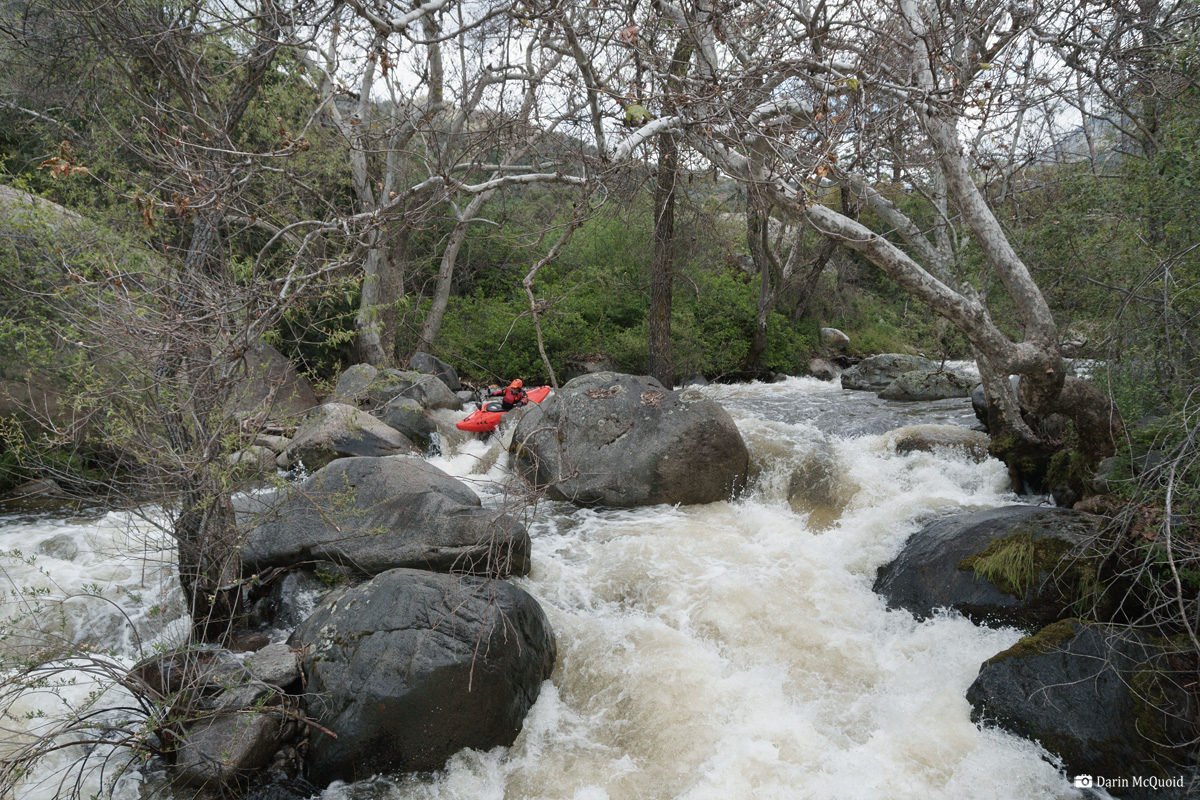 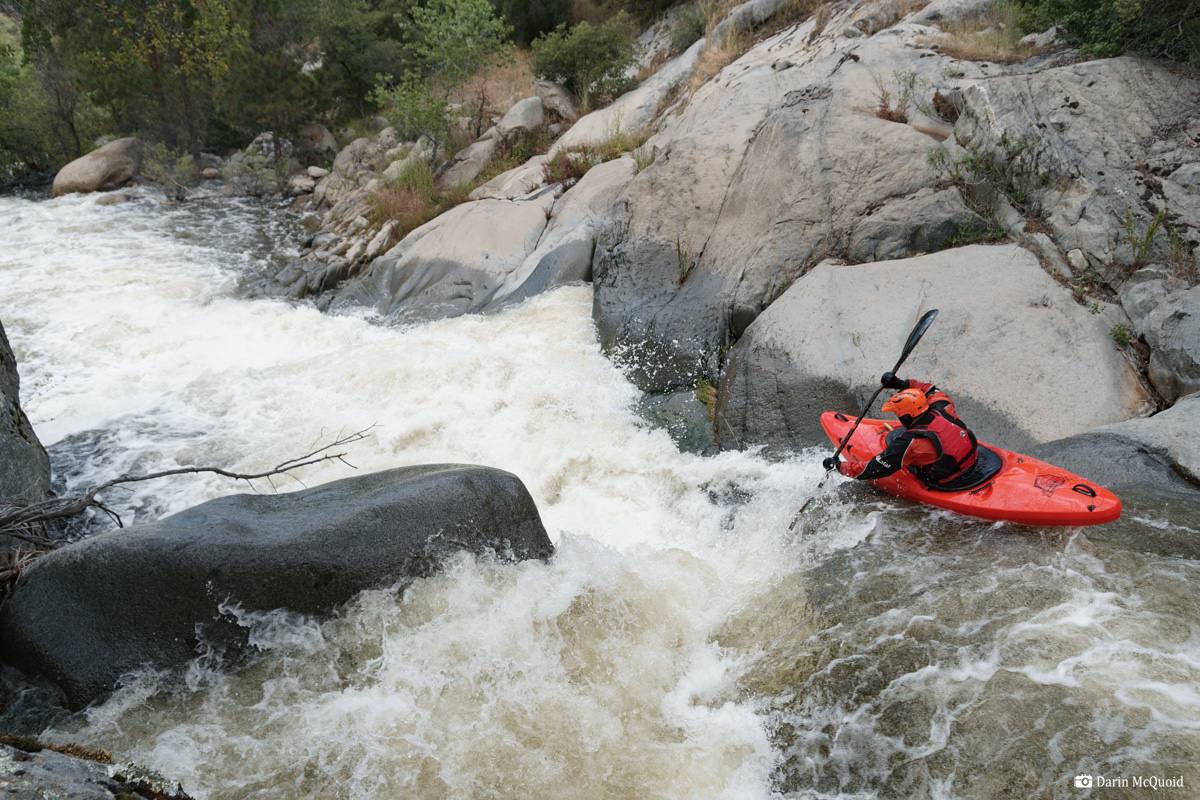 An hour into the run and we're out for an extended scout of the crux of the run. This rapid could be portaged but would be a lot of work, and we both enjoy multi-move rapids. 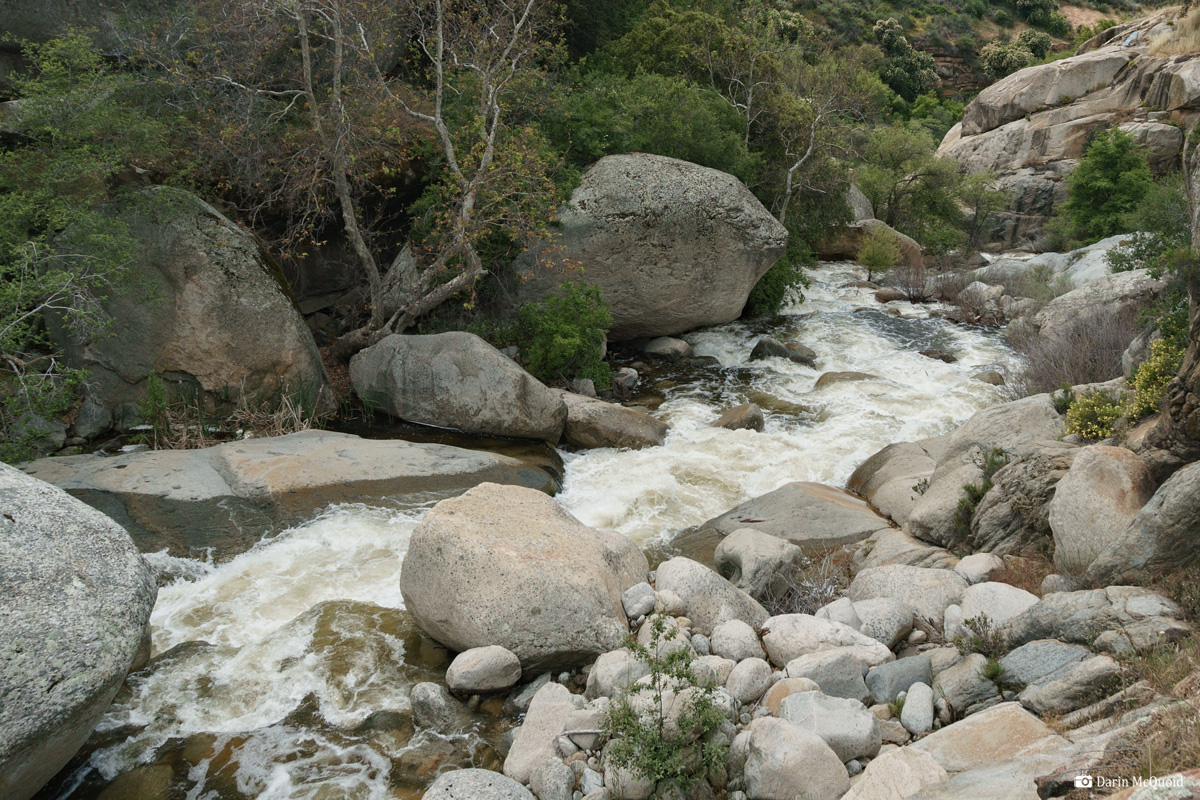 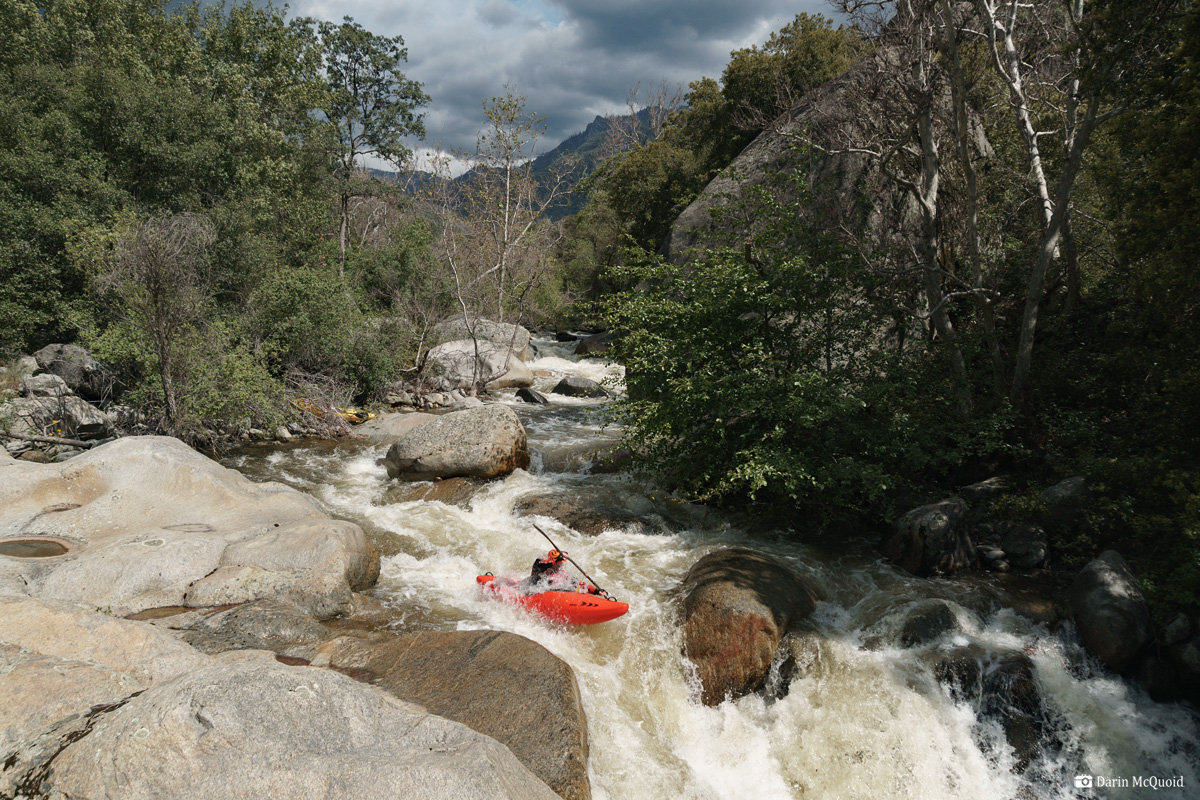 Three moves into the rapid and three to go, it's a long sequence. Note the house ridgeline on the top right. 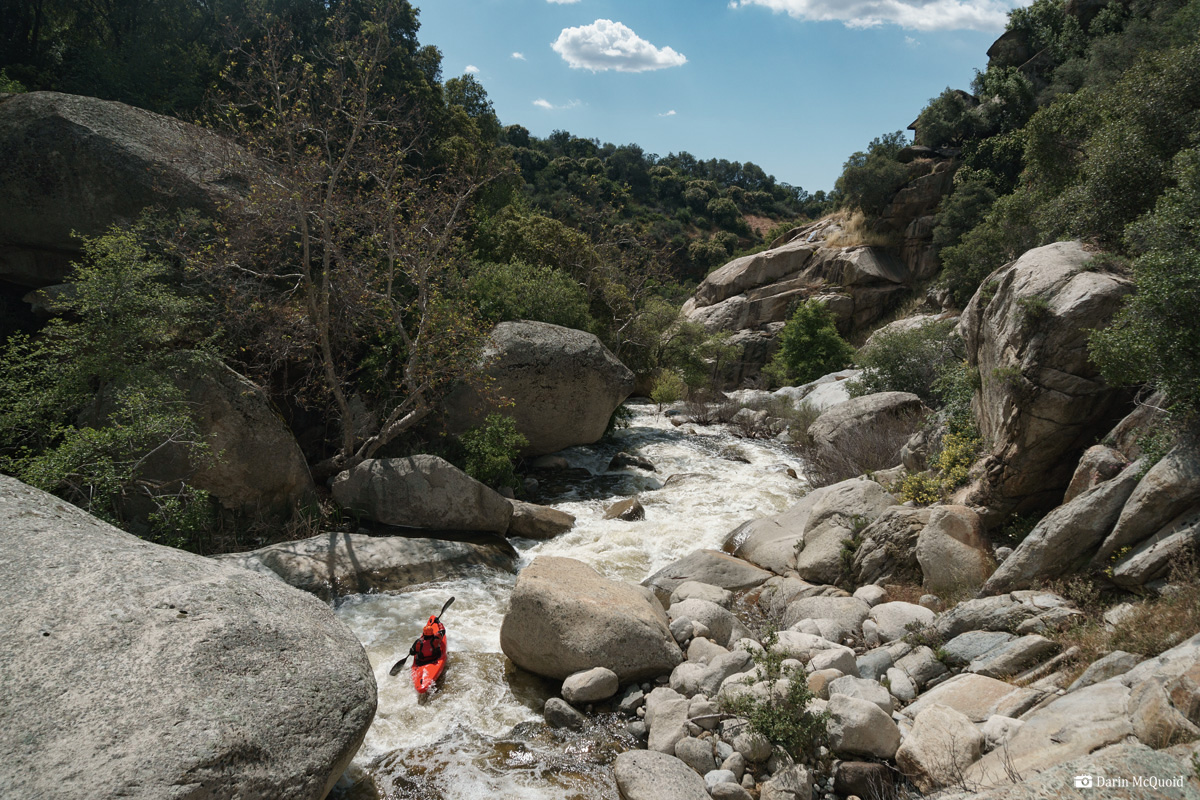 In the gorge there are some nice "backyard" slides. 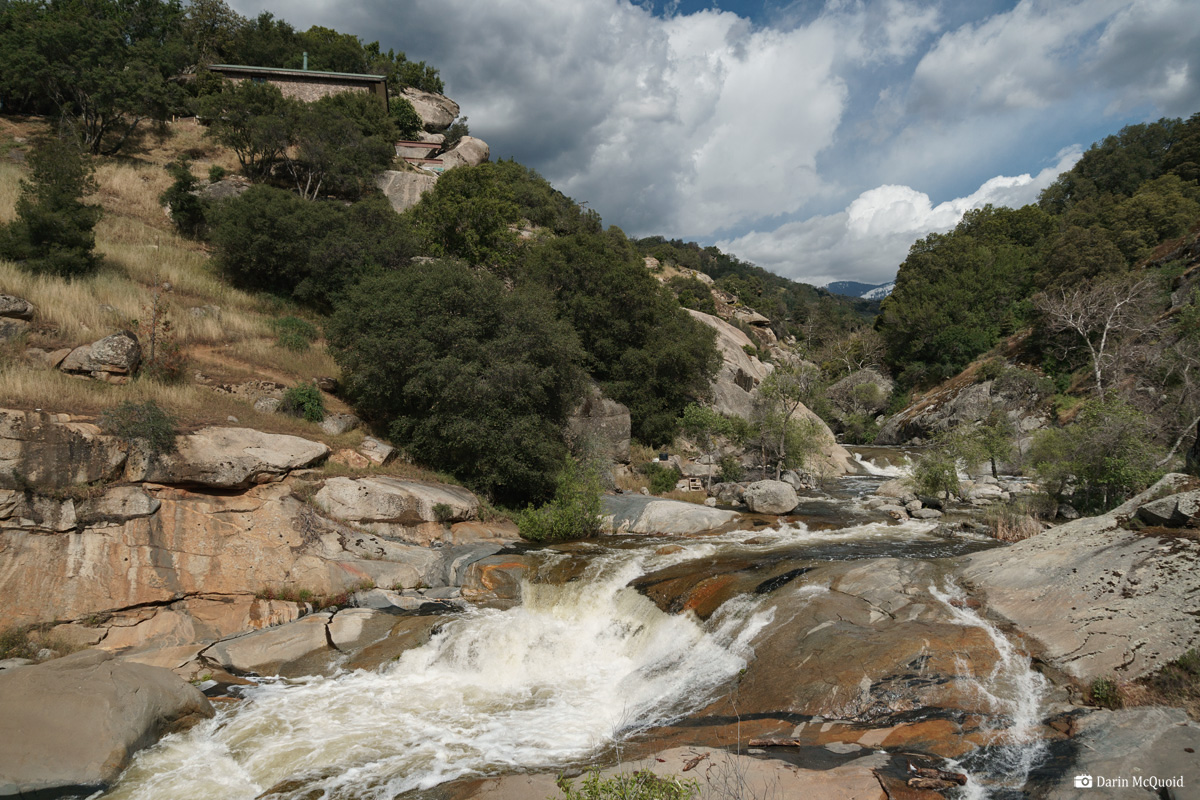 Rok Sribar enjoying some of a few relaxed slides. 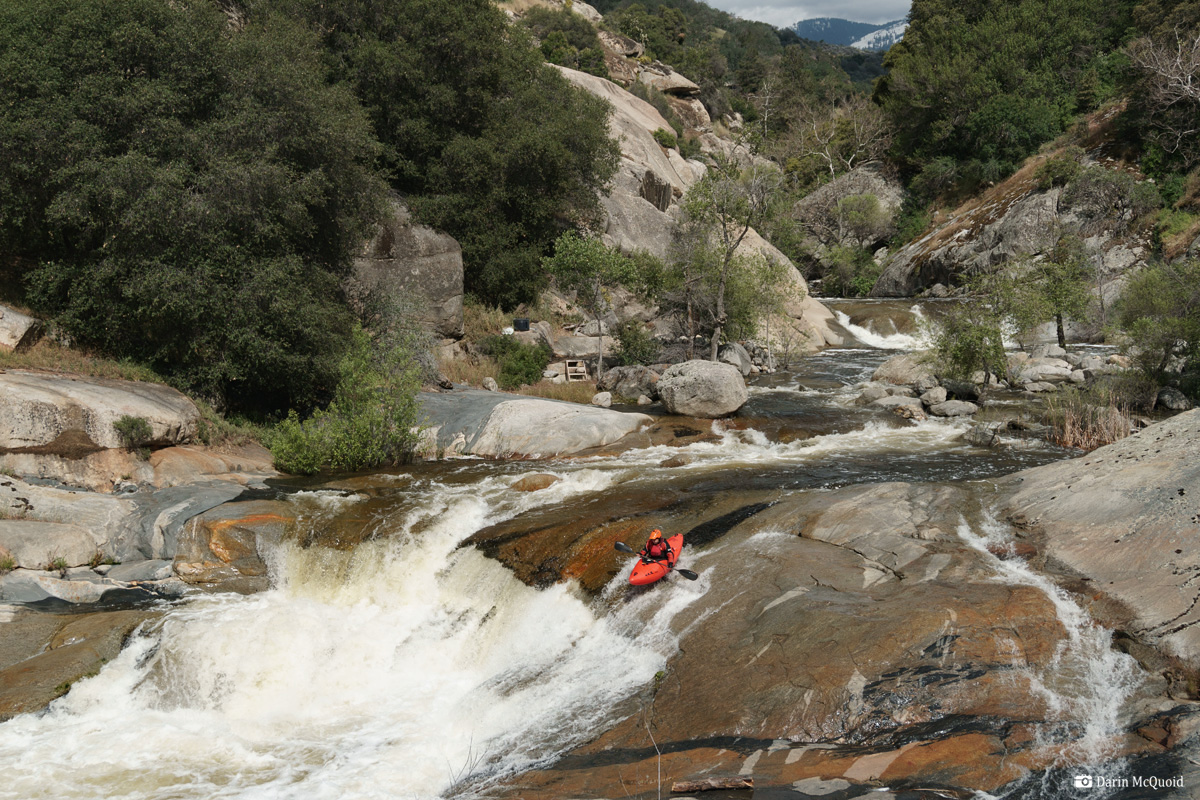 There is one very unusual slide after the easier ones. It's complicated, messy and impossible to explain. Thankfully like many rapids, it goes better than it looks. Past the slides it's back to steep boulder gardens. We aggressivly boat scout down to the marque rapid of the section.


Rok paddles into the entrace rapid to the falls. 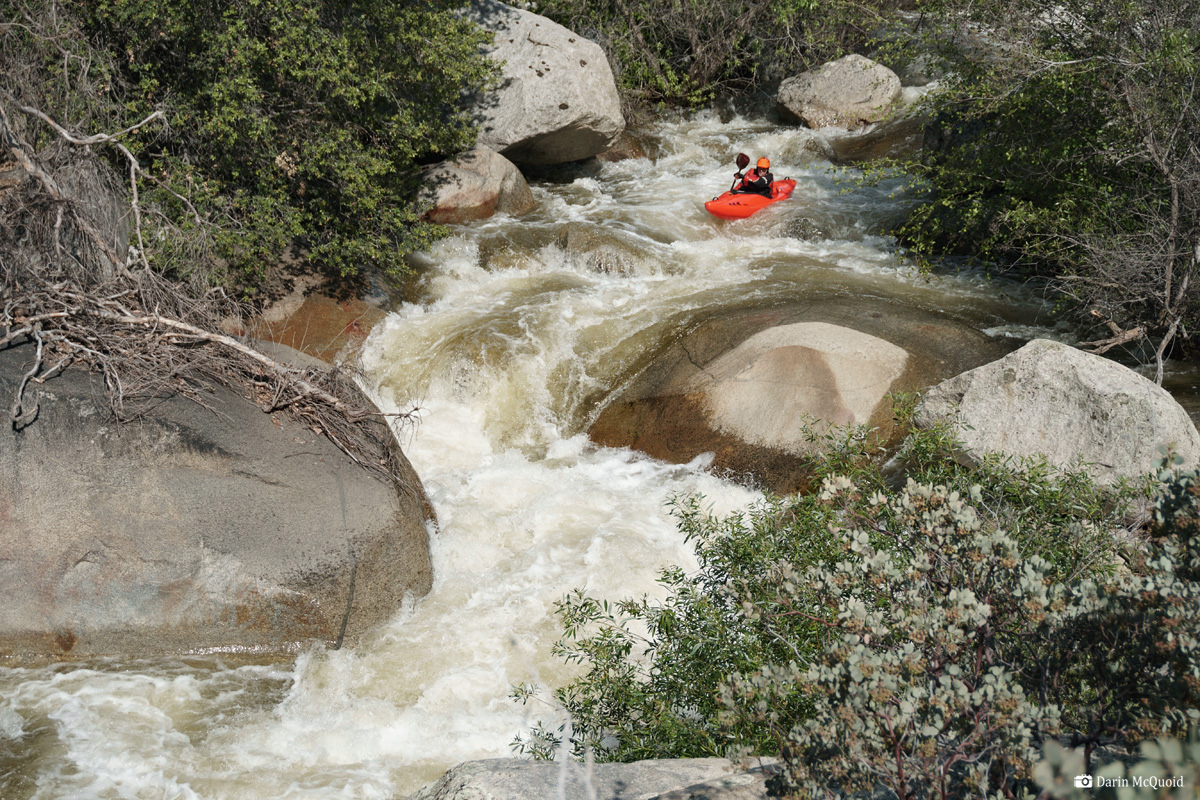 Truely unique, both the falls and the location. Again we're in someone's backyard, and the waterfall is exciting with the lead-in rapid, and a rather fine line between getting enough boof but not going too far right into the green water. 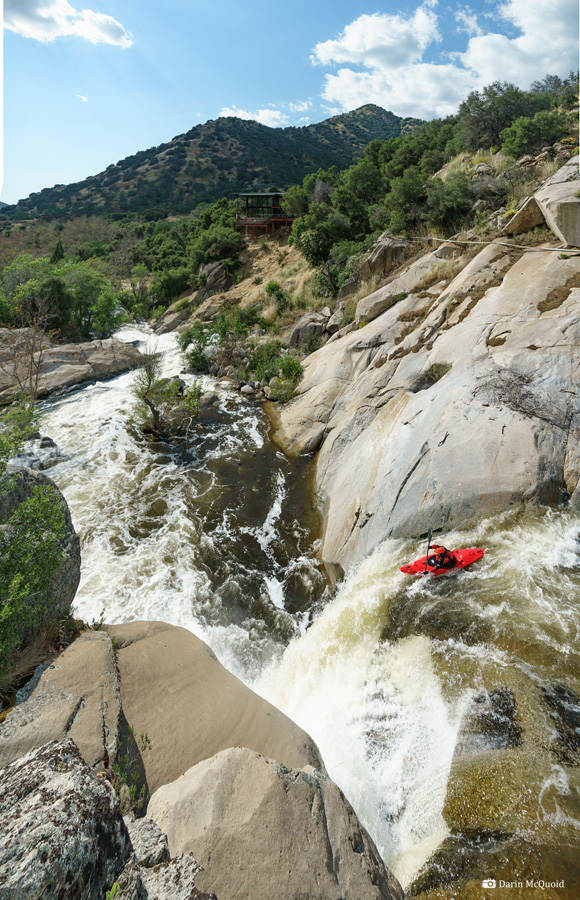 A rare moment of the author in action. 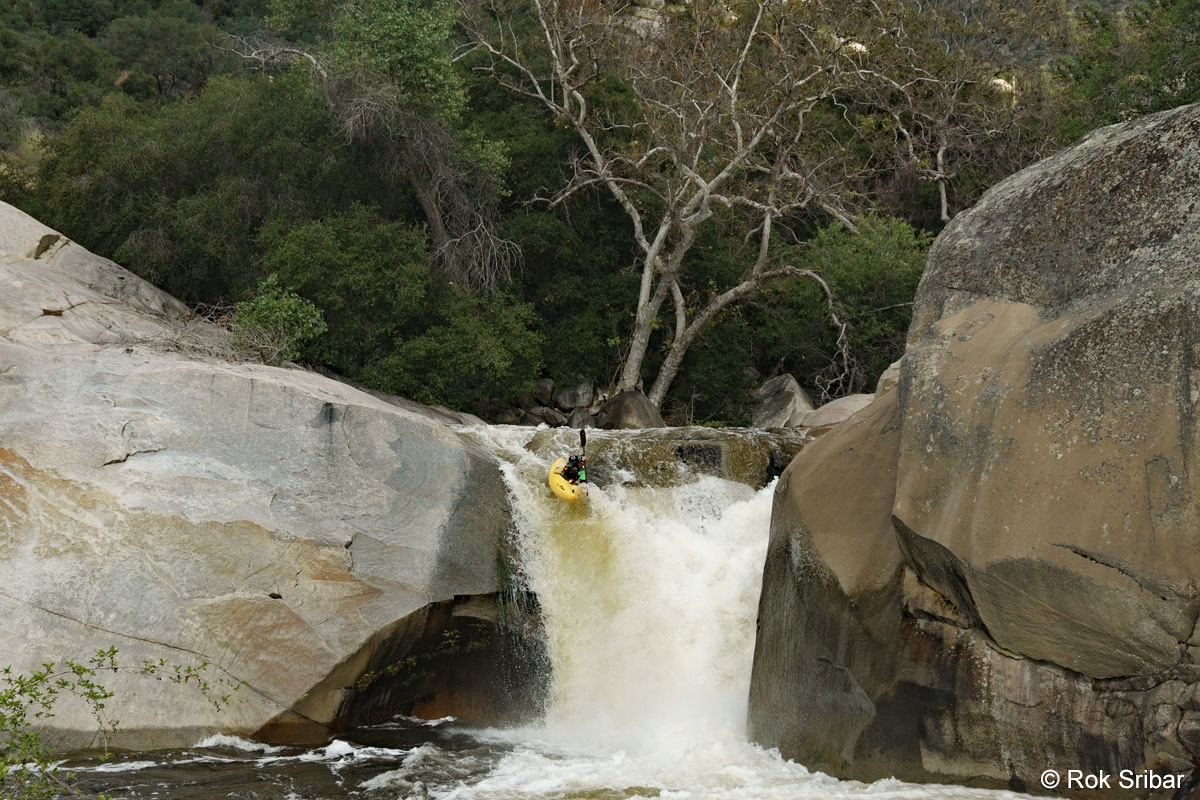 Below the waterfall it's back to boulder gardens. They get brushier. Then there is some wood in the riverbed, and it takes twenty minutes to portage ten feet. This isn't fun. We push downstream for another mile. Finally we run a rapid that would have killed us if there was a log hiding in it. Enough is enough. And that's how take-out goes for the Upper South Kaweah. Paddle until it's terrifying, then take out and hope you don't get shot by a land owner. We are exceptionally lucky and meet some welcoming house owners, who not only let us take out on their driveway but help shuttle us to our car at the bridge. My suggestion would be to bring a bottle of wine and see if you can sweet talk your way into a take out half a mile to a mile above the bridge on the shuttle map.

The Upper South Kaweah is geat and terrible paddling. The riverbed itself is quality, yet the brush makes it far from classic. Perhaps after the high water we've seen in early 2017 it will clean up. 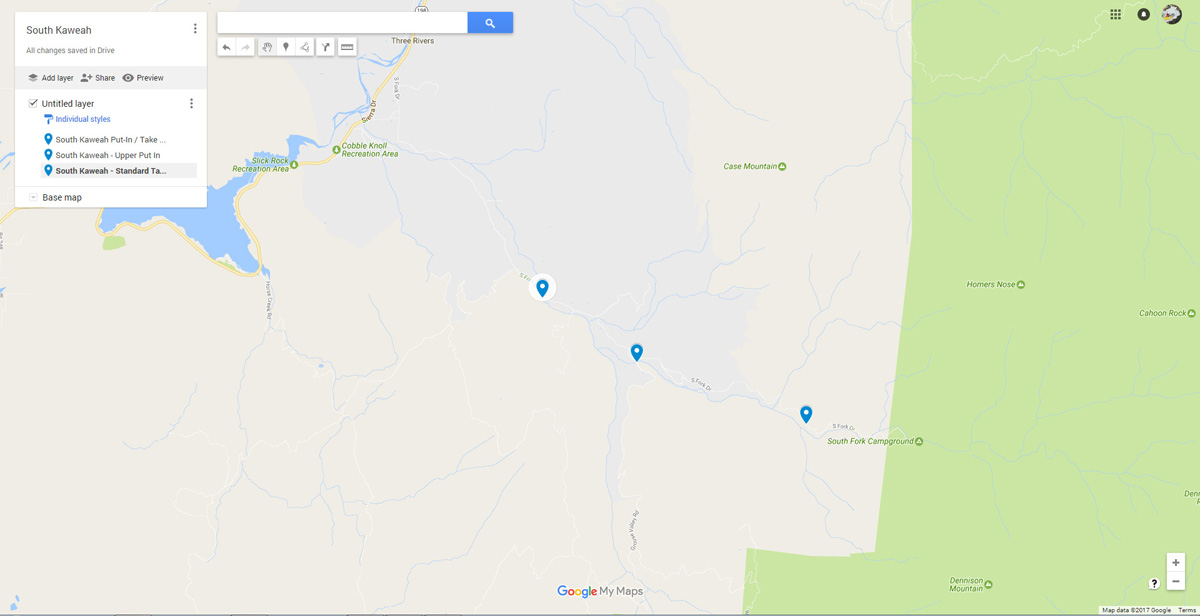