As the first attempt on the river was happening in 1981, I was just being born. The expedition reached a modest success, navigating sixty percent of the river and utilizing helicopter support to avoid the lower narrows. Four years later, 1981 expedition leader Rob Lesser brought a team to the Stikine and completed the river through the lower narrows. Over the next twenty years, only half the groups attempting the Stikine would descend successfully. Twenty nine years after the first descent, the Stikine has become a benchmark for class V paddlers. Finding the right water level (low) on the river has always been a problem. With the gauge lying a hundred kilometers downstream, flows were an educated guess at best. In 2009 an older gauge at Telegraph Creek (take out) went online making flow reading easy.

Of course because it's easy to the flow doesn't mean it's easy to get the correct flow. Done in the fall, the Stikine season is rainy season. More than one group has made the trek to find the river bursting. The trek. A forty hour drive from Sacramento, California to the bridge. Just under two thousand miles. Only ten years ago, the last four hours of driving was on dirt road. Now just the shuttle is unpaved. We'd broken up our drive with a trip on the Homathko River. This was also a roll of the dice on the weather. We were mildly relieved when we checked the weather. It was good, so the Stikine was on for sure and it was time to be a little nervous again.

Good is such a relative term. A dry but cold spell. Nights below freezing and daytime highs in the upper forties. 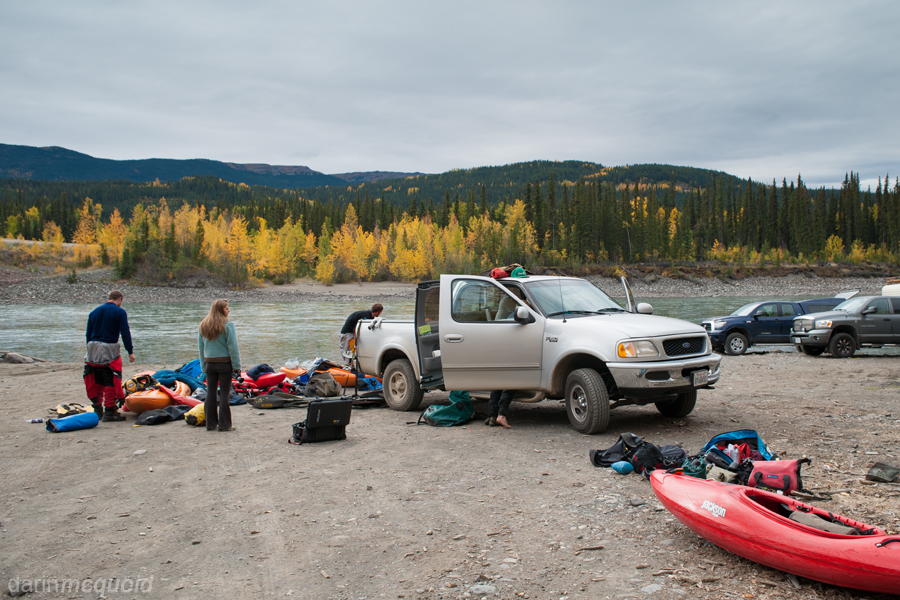 There is something very comforting about doing a first descent. Because no one has done the river before, it's easy to drop in with blind optimism. The Stikine is the opposite. Because of it's rich history, the horror stories abound: Lost kayaks, near death swims, thousand foot vertical climbs, and a few helicopter rescues.  Trucks howl across the metal lanes on the Highway 37 bridge, adding to the eerie sense. This is the most nervous I think I've ever been before putting on. Had we not just spent four days driving here I might be tempted to sit it out.

Water levels are lower than any in our group have seen it before. In some ways this will be good, because it wont be as pushy. But we all known that in rivers like this, low water means ledge holes too, and what was an easy line at higher flows might not be so nice. We leisurely pack our boats. Why wont it warm up just a little? Boats packed with extra gear for the cold weather we are ready to go and have to get the cliche sign photo. 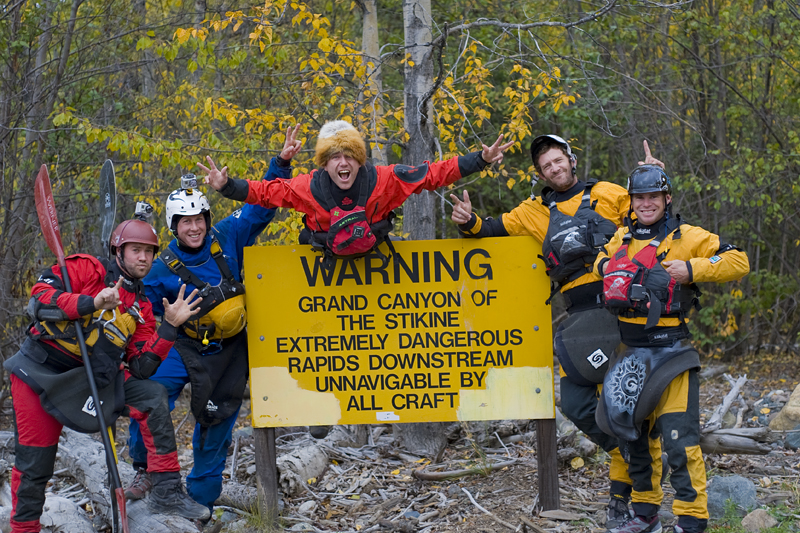 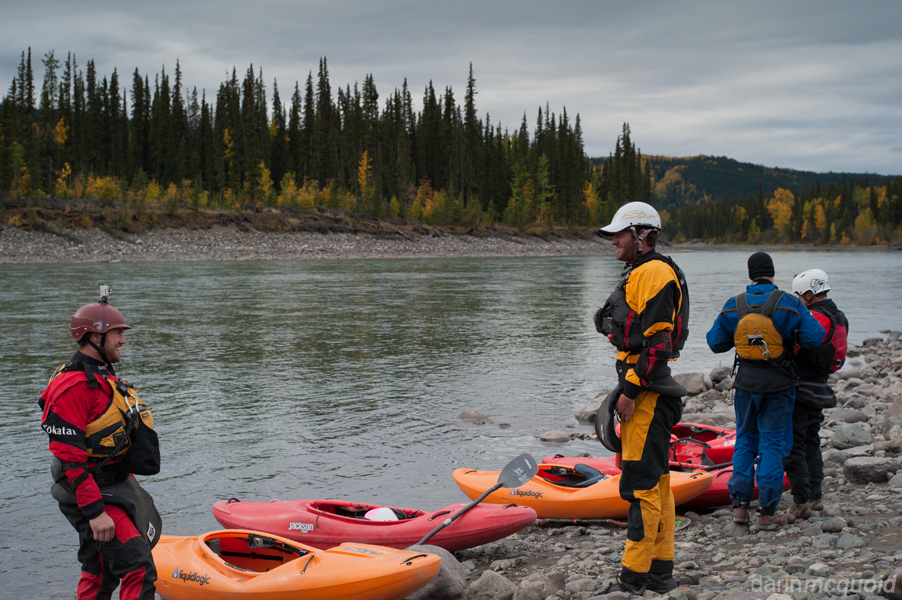 We launched into the glacial waters and made quick progress through six flat miles. It was cold enough that paddling felt good. Boat adjustments were made as necessary above Entrance Falls. Standing on the rocky beach we talk over the line decide not to scout.  Pushing into the current I wonder how hard will this be compared to the big water in India and Pakistan. Dropping into the gorge we stay left, skirting around some big holes and then use a pillow to help us move right and are through Entrance Falls. Whew that felt good, big water is fun! A few read and run rapids separate us from Wicked Wanda, where we get out for a quick scout and take some pictures. 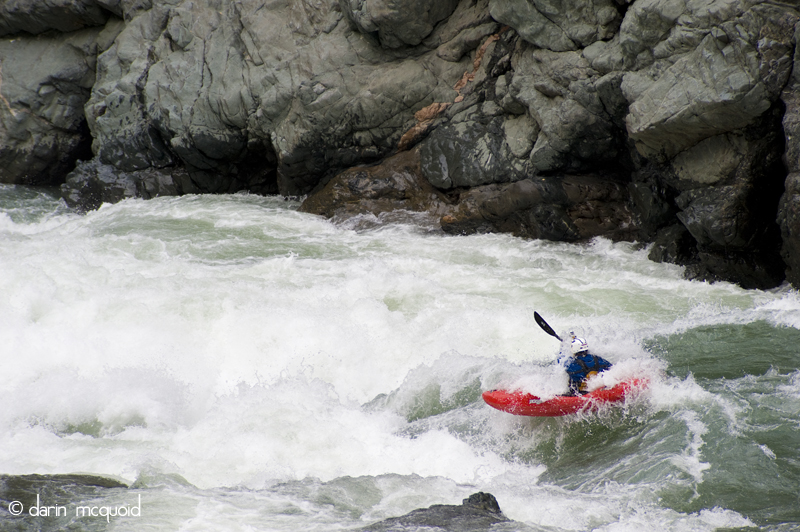 Rush Sturges and Jonas Grunwald in the run out of Wicked Wanda. 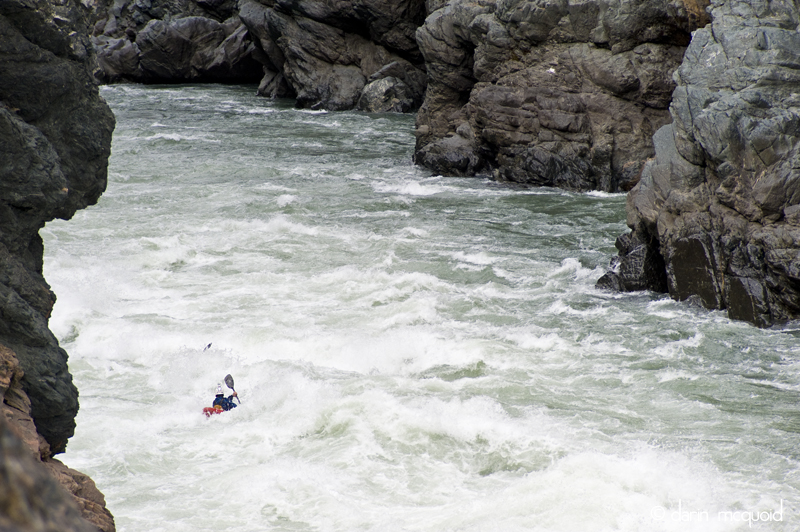 Only a short ways downstream we were out for another quick scout; Three Goats. Power through the entrance hole, than go right or left of the bottom pour over. 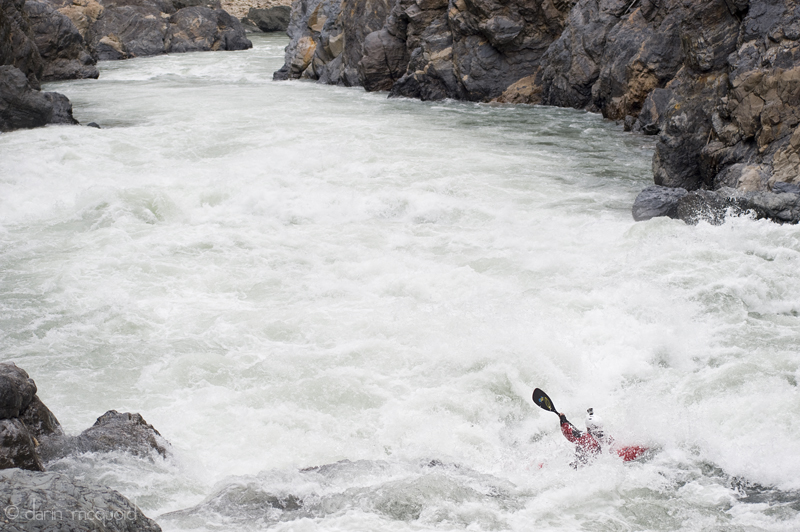 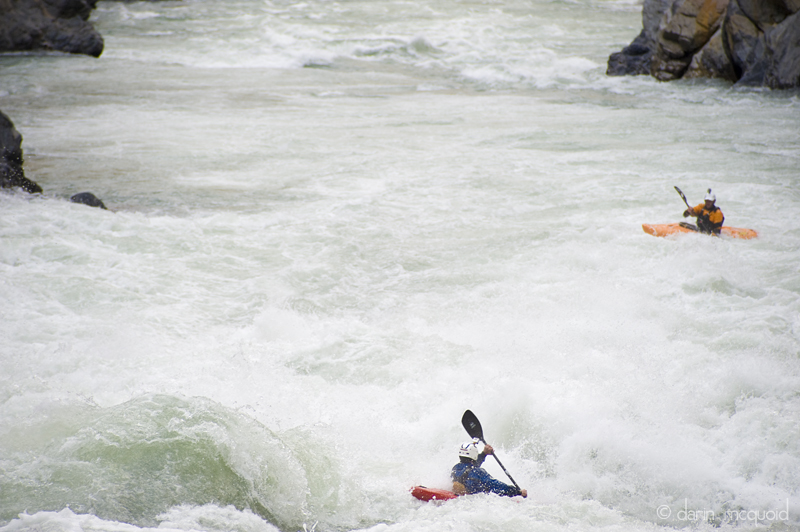 Several miles quickly passed as we cruised through many rapids and boat scouted a few, before arriving at the crux of day one. The entrance to pass/fail is long, complicated and near mandatory. Portaging would be more dangerous. The line varies with flow and we scouted all the way around the corner. At medium to lower flows a hole forms on the left wall. We split into two teams to get footage.


Rush Sturges making the first move down the center. 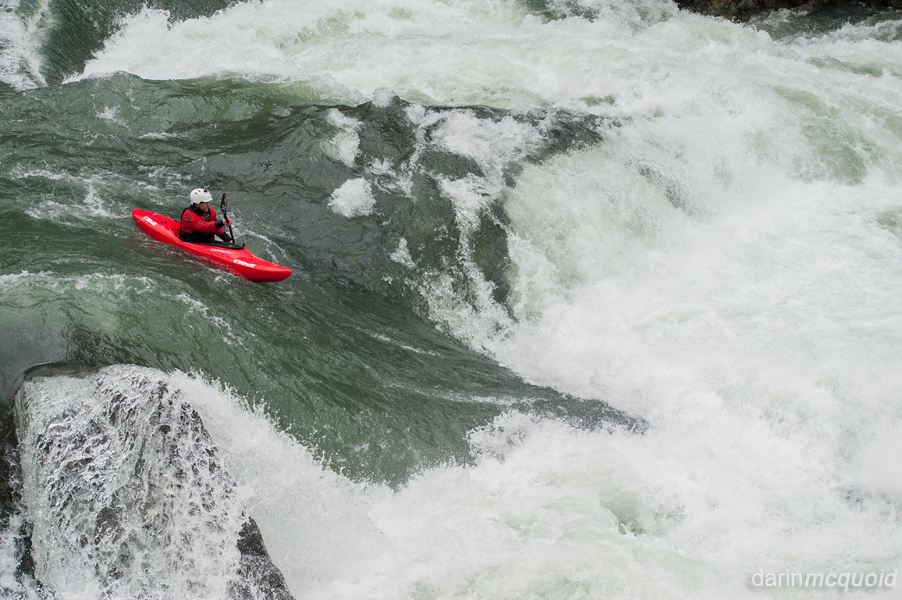 Charlie Center, Jonas Grunwald and Rush Sturges in the middle of the entry rapid. 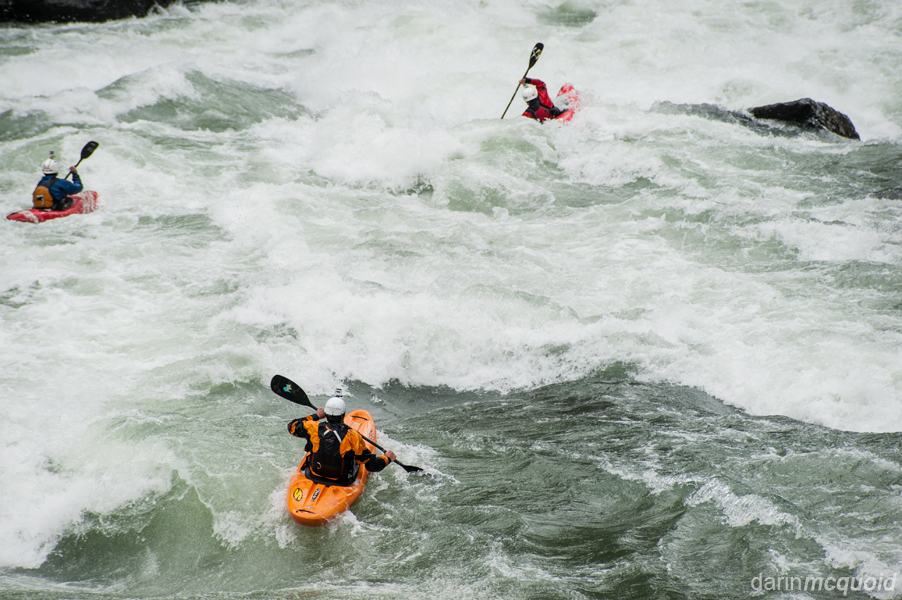 The same trio again. What at high water was a breaking wave might have been more on just the breaking side of things, with a narrow window on the right. 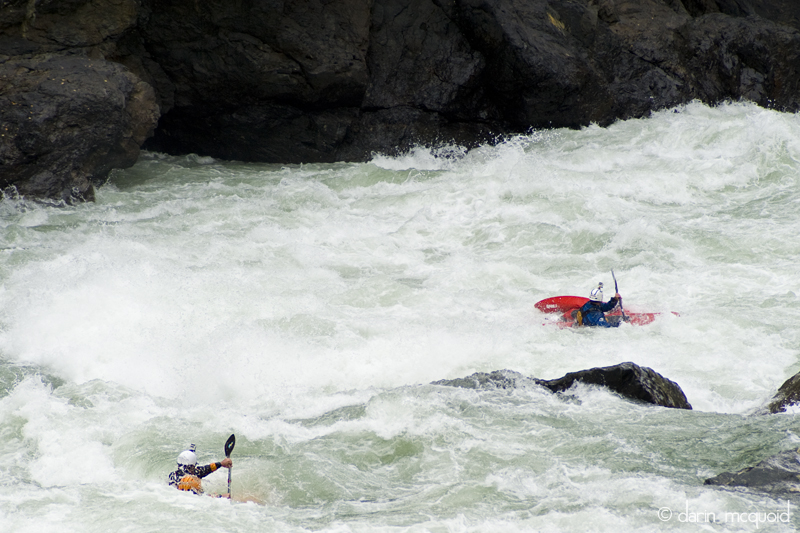 The eddy above pass/fail is highly sought after. 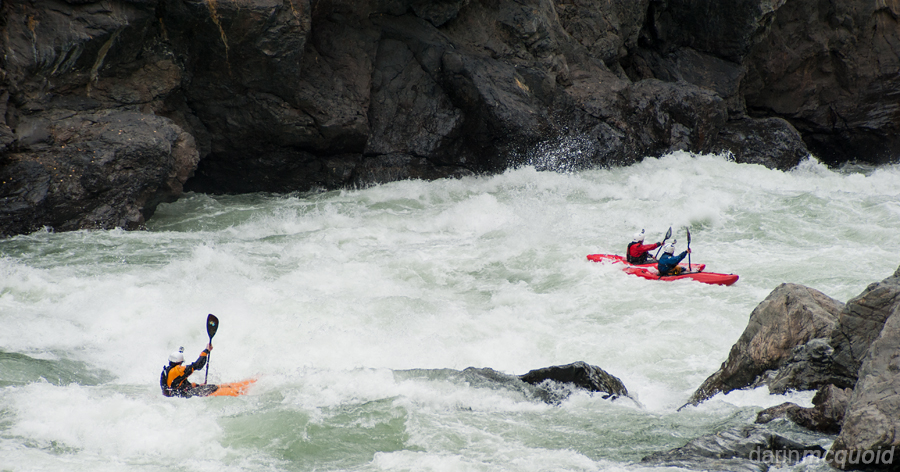 At higher flows pass/fail is one of the toughest rapids on the Stikine. The move is as classic as can be for big water: a left to right ferry. Failing puts the paddler left of the rock and into a big hole. Passing on the right of the rock is good to go. The good news is that there is a portage down the right, and at lower flows the move isn't too bad. 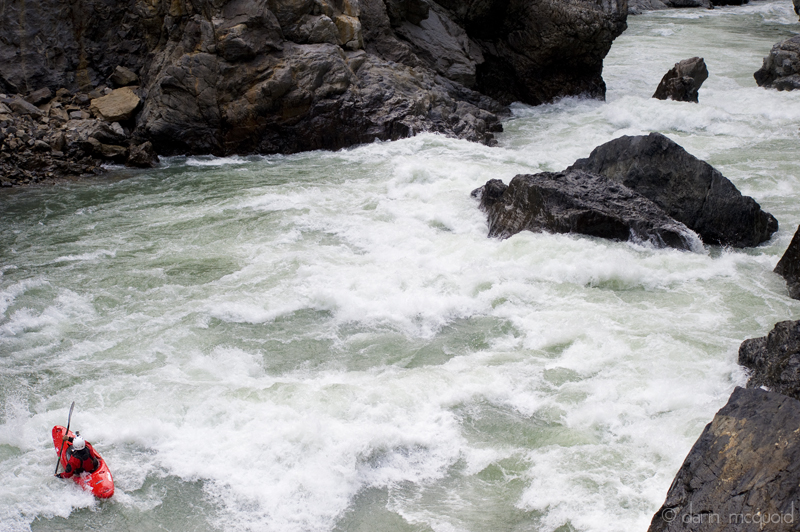 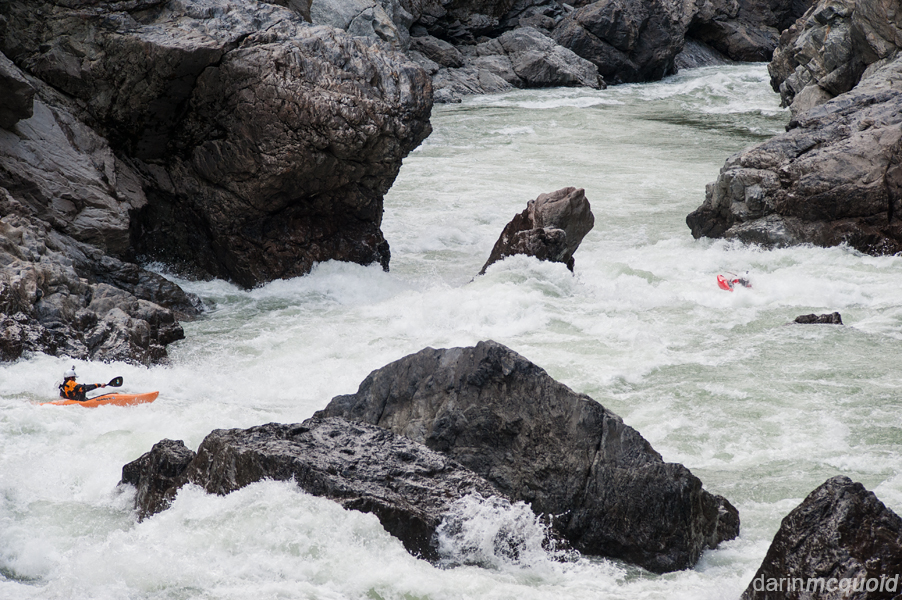 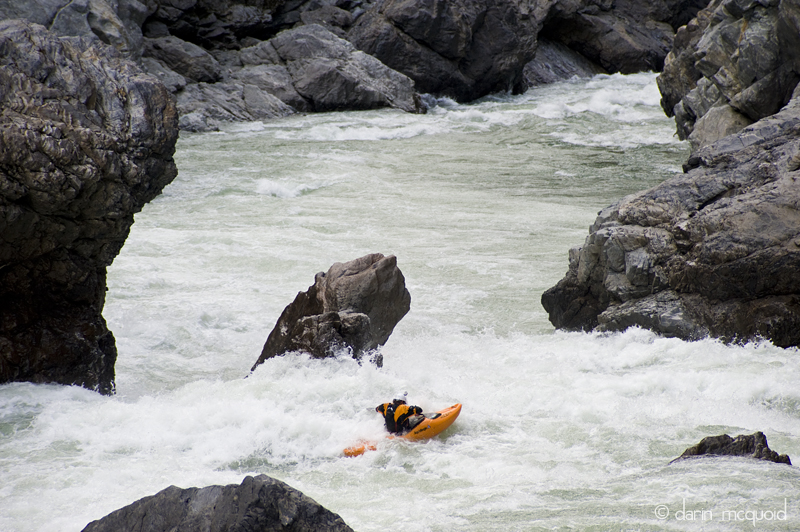 With pass/fail behind us, we had one more named rapid before camp. Perhaps the most feared on the river. Wasson's Hole. Notorious for nearly drowning John Wasson is a large hole sandwiched between two vertical walls. Coming into Wasson's we decided to catch the eddy on the right. Corey was in the lead and was suddenly sucked down in the eddy line. Out of sight. Then he resurfaced upside down and tried to roll in the tumultuous eddy line. I tried to catch up with him in case he came part way up. A t-rescue on the Grand Canyon of the Stikine? Why not. Corey rolled all the way up once I got close and we worked hard to catch the eddy, just making it. We decided not to scout due to how tenuous it would be to get on shore. We'd just run the standard medium or lower line, down the right punching a hole moving slightly left, then being sure to stay right of the big hole.

Through Wasson's Hole we made quick work of the section down to the first camp, Site Zed. It's an unusual sight on the Stikine: flat ground. Site Zed was the site of a proposed dam in the '70's. Well more than proposed, BC Hydro had put in gauges, and flown bulldozers into Site Zed, leveled some platforms and even had temporary buildings put up. Locals violently opposed the dam, and went as far as burning a fuel depot before the project was called off.


Nature is quickly reclaiming Site Zed, but there is still some open space and nice camping. 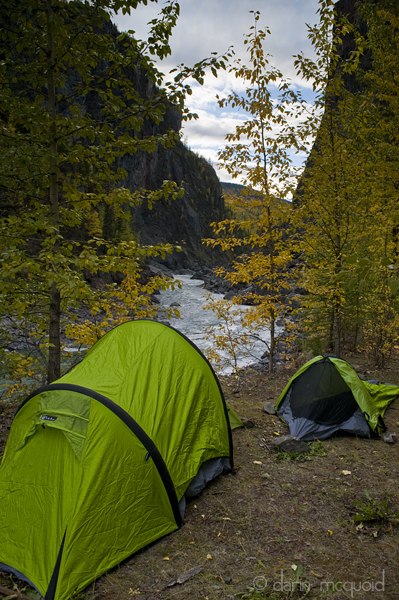 Rush and Charlie laugh about the fire starters that Charlie picked up at Wal-Mart. They worked better than expected considering they didn't even get put in a drybag. 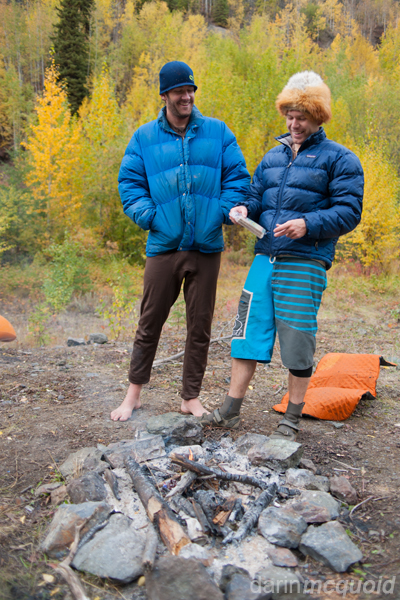 Site Zed is an interesting place to just hike around and soak in the beauty of the gorge. Fall colors were a nice bonus too. 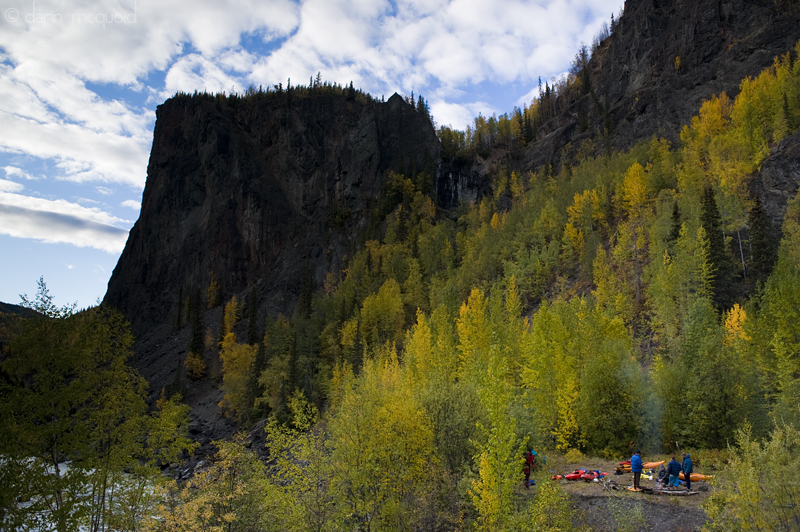 Reminiscent of the past, and a reminder of how fortunate we are to be paddling a river not a lake. 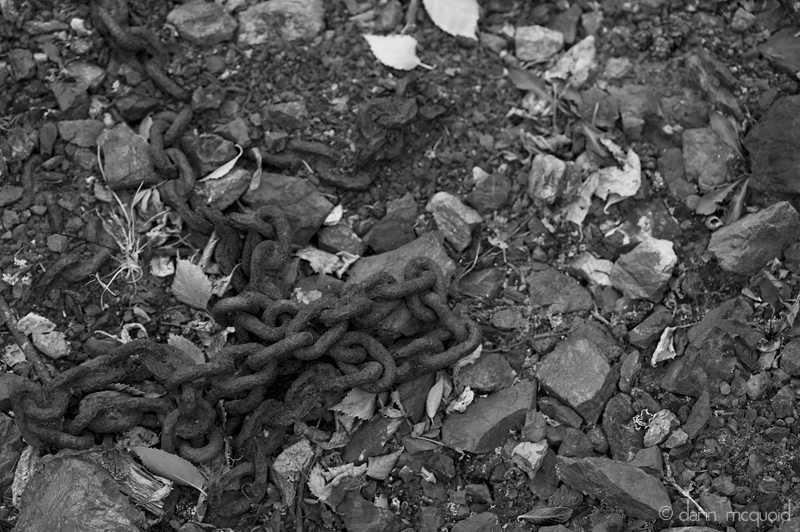 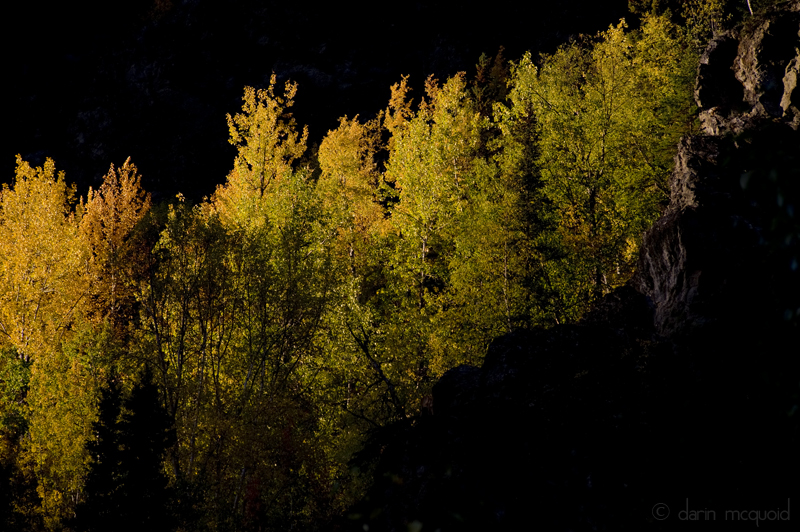 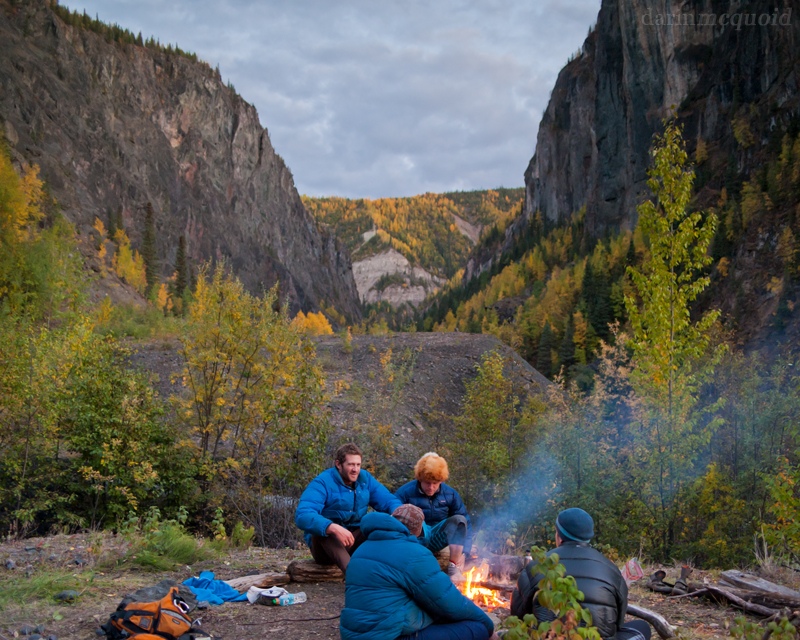 Pulling into camp only four hours after putting on, I felt a lot of relief. Most of the notorious rapids were behind us and the river was big and tough but manageable. It felt good to take a deep breath and just enjoy the experience of being out in the elements, challenged but not overwhelmed. Tomorrow is going to be a good day.


The moon lights the entrace to Site Zed rapid. 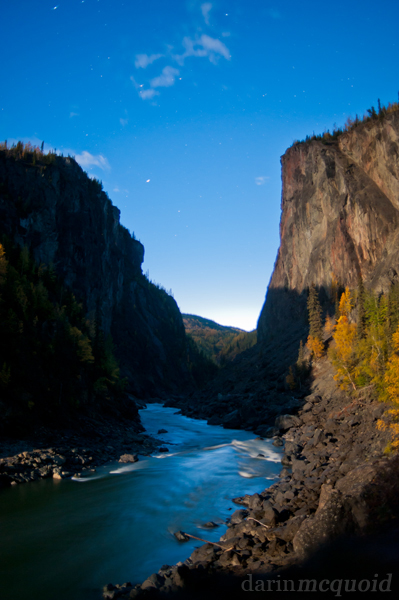