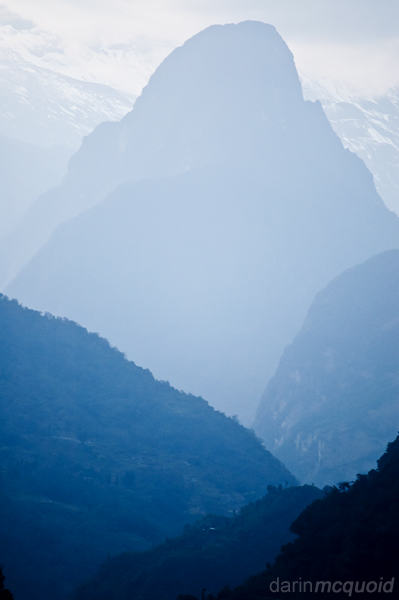 The Talung is down in there, base of Kanchenjunga at the top of the frame.


On our arrival in Sikkim we receive some bad news. We already had two permits and had a hired guide and driver as required. The bad news was that to access the Talung we'd need three more permits, two of which must be applied for three months in advance. In person, in Delhi. Our original plan had been to spend most of our time in India running the Talung River. The Talung flows of Mount Kangchenjunga, the world's third highest peak, and is a tributary of the Teesta. The permits are required because part of it is a National Park, and also what we could call an "Indian Reserve". I'm not sure what actual Indians would call it, but it's an area set aside for the indigenous Lepcha. Relatively set aside as we'll see.


Looking at Kangchenjunga from Mangan. 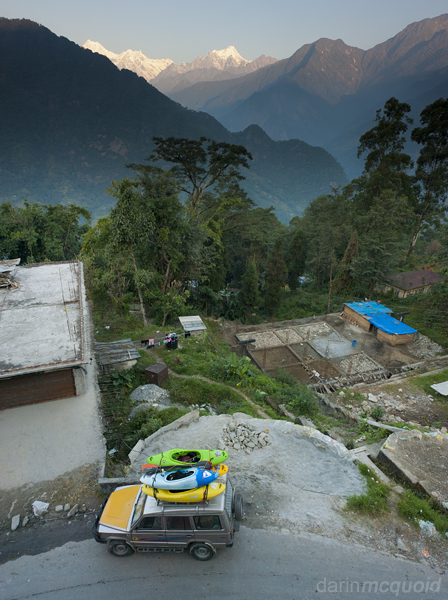 Targain was a faithful guide through our time on the Teesta, and during our adventures good bonds formed. Good enough that Targain started pulling a few strings for us, extending our North Sikkim permit and explaining our situation. We'd be just on the edge of the National Park, not actually entering it, nor would be be trekking. Two permits down and he somehow secures the last one for us to get closer to Kangchenjunga.
Driving towards the mountain it's apparent we're off the beaten path. The single lane road is exceedingly narrow and unpaved. A bridge crossing over the Talung requires some scouting.


Targain takes a look at the bridge. 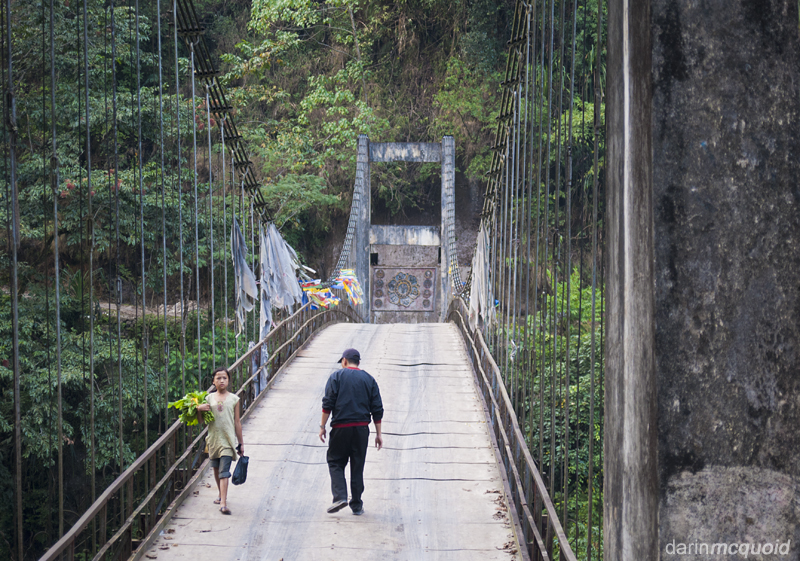 Slight apprehensions will be made full by the sign.

Cresting a rise in the road we catch our first true glimpse of Kangchenjunga, stopping speechless. 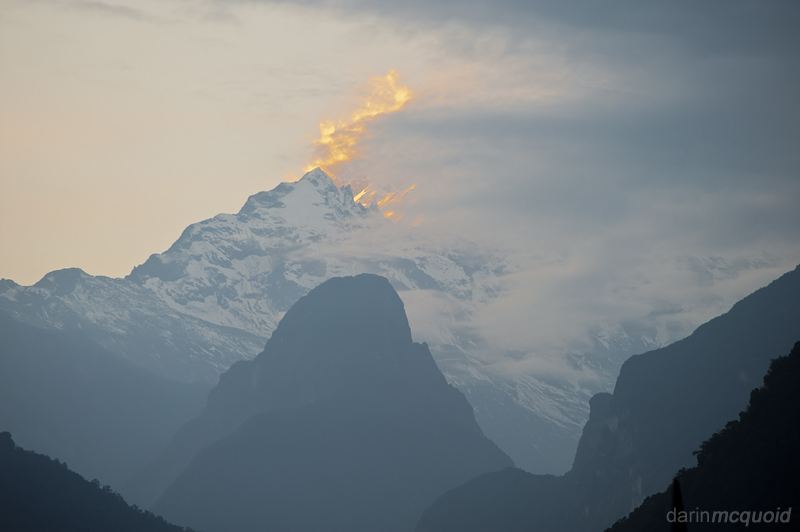 We drive into the dark, not sure of where we'll stay. We've been told that camping is not an option up here, and as we pull into the "town" of Lingza we find that there are no motels. Hmmm...just a few buildings actually. Thankfully Targain comes to our rescue once again. We stop at a school run by a nearby Bhuddist Monastery. They don't seem too keen on us, but after negotiations by Targain we are in.  Funny how similar children are the world over.


These budding Bhuddist monks are happy to see some new faces and shadow us throughout our stay. 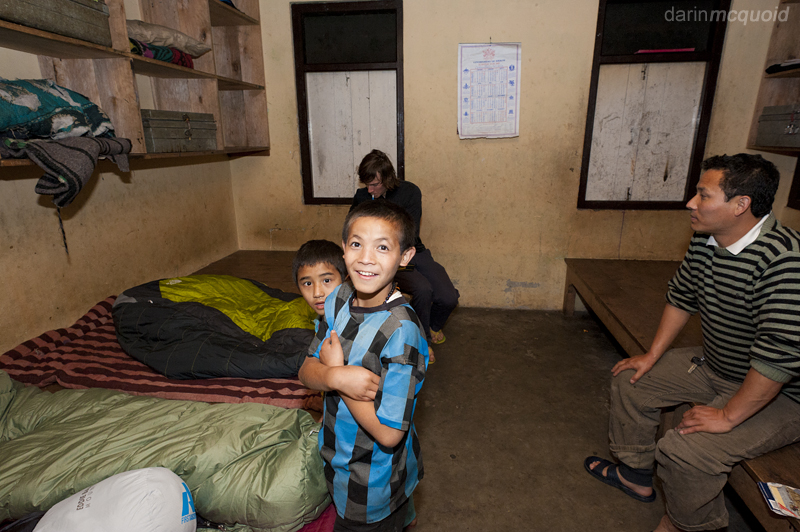 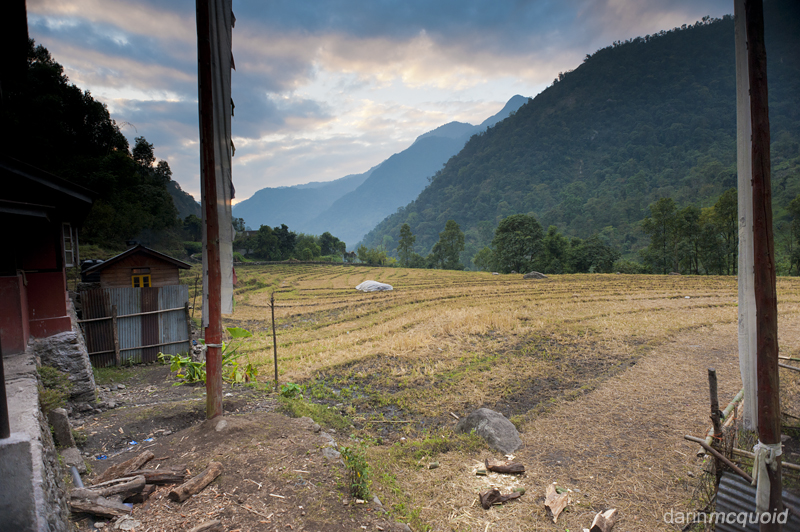 I rise early with the sun and enjoy the pastoral setting. 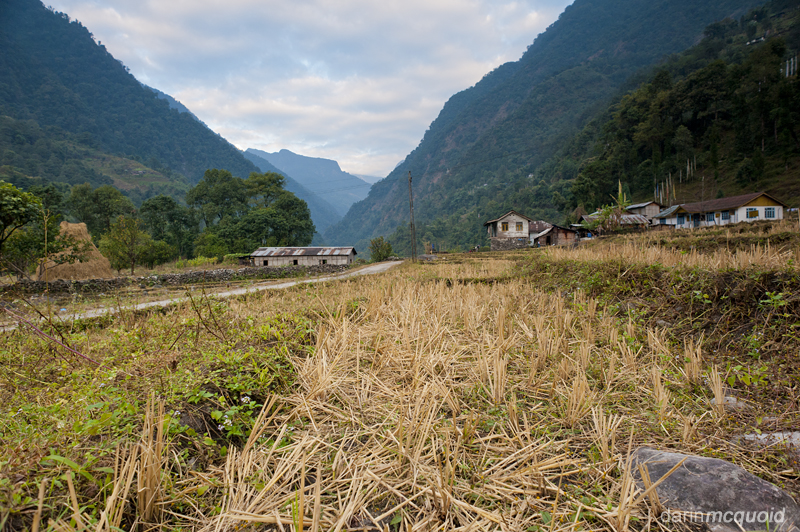 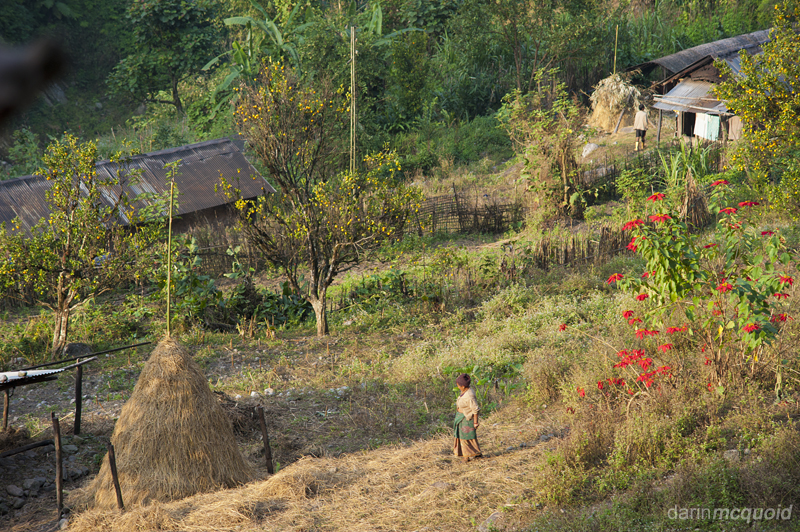 Industry marches ahead. Despite the status of the land, it looks like the power needs of India trump the indigenous area status. The project was just getting started while we were there, but without a doubt it will change Lingza. 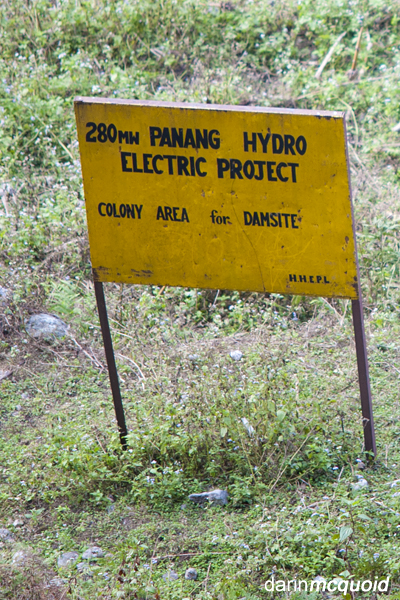 We drove upstream from Lingza. The narrow one lane dirt road climbed the canyon walls, making the notorious Cal-Salmon road look like I5. It was just wide enough for our Tata jeep and rough as can be. The road ends at Be, a small village on the other side of a tributary of the Talung. There is only a footbridge to town, and eight miles futher up the trail is the actual Monastary associated with the school we are staying at. Unfortunatly it's in the park and would taking a trekking permit to go see. The tributary below Be isn't looking good, so we, aka Targain, asks around and gathers beta. Apparently there is a waterfall just above a footbridge crossing the Talung between Lingza and here. Somehow we'd missed the trail on the drive up but it should be easy to find. We hop in the car and crawl back down the road. 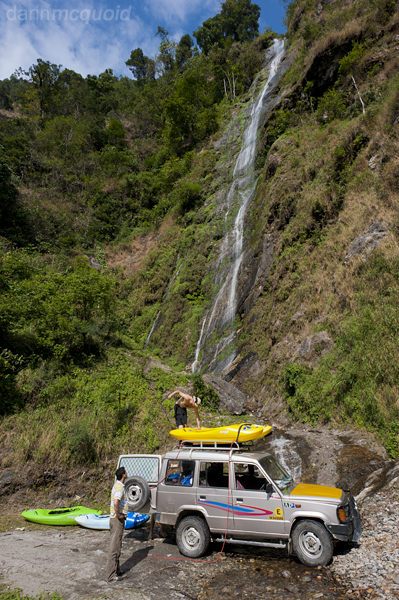 There is a nice trail down the steep canyon wall. A town lies high on the other side and this is the only access. Hiking our boats down the stairs seems like a lot of work. Until we get passed by locals carrying way more weight on their head. I guess it's all in perspective. We are at the edge of where the jungle turns to forrest and the feeling at the footbridge is quite surreal.


Somehow the beta had gotten mixed up and the waterfall was just below the bridge. 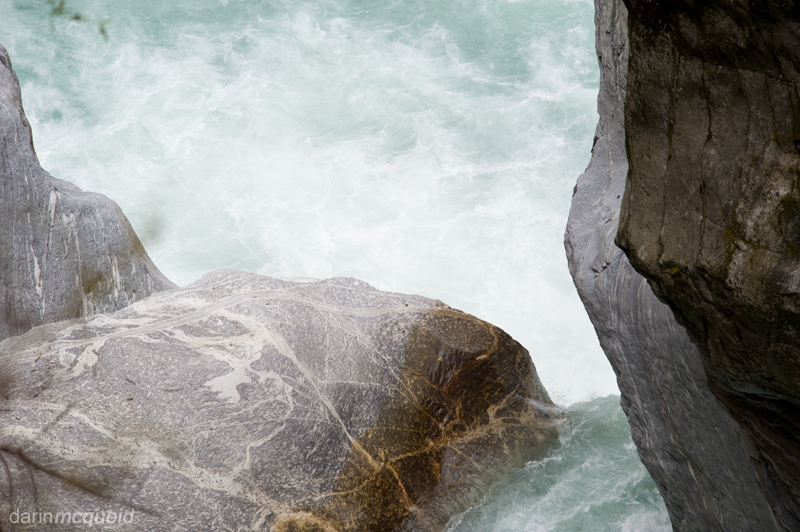 From the lip it looked tricky, but like it just might go. The canyon walls were vertical, slick and wet. At attempt is made at scouting on the left but we can't see anything but the lip. We cross the bridge, find a potential route and set up our throw ropes. After a short near vertical section the jungle gives way to an open scree field. It's steep but possible. Breathtaking, one of the must beautiful falls I've seen. The lip of the waterfall isn't a problem at all. Too bad the landing zone is a no go, it's a true pothole drop that looks impossible to escape.


Very unusual geology for the Himilaya. 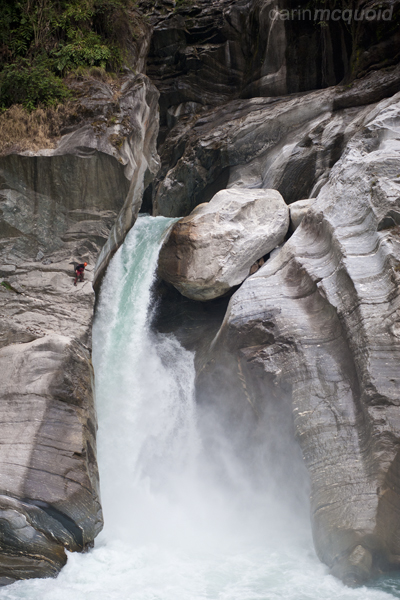 The cave is simply out of the question. Somehow it's already late in the day, so we grab our boats and climb down to below the falls. 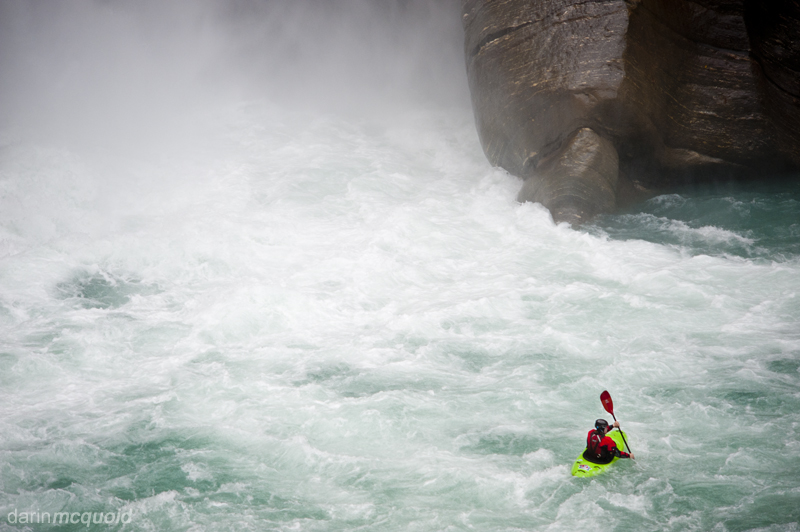 Once below the waterfall the Talung is a fun mix of big boulder gardens. Water levels are now low. Thankfully it's a short run as daylight fades fast. We make a quick portage and one sieve and then boof a hole to reach the outskirts of town.


Ben puts on his best ugly face for the boof. 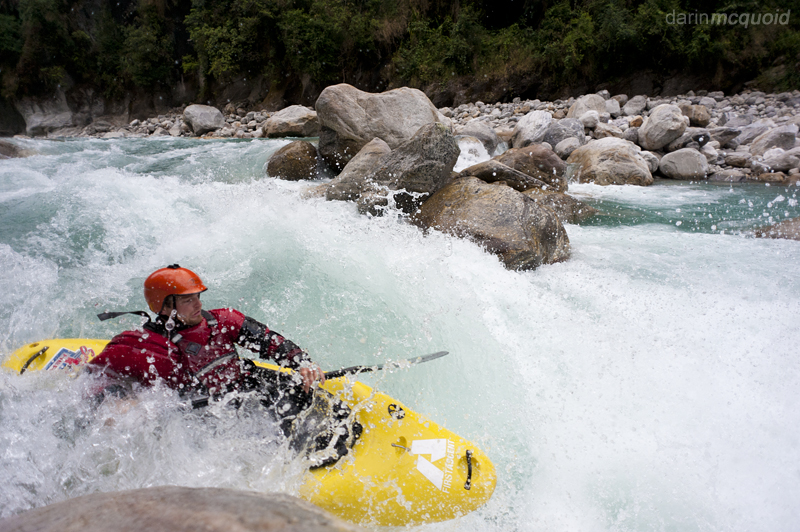 We spend the evening at the school in Lingza, hearing tales of the area and its history. According to a local tale at one point in time this remote monastary at the foot of Kangchenjunga was the last refuge of Bhuddism when it was under attack hundreds of years ago. The remote location kept it hidden and safe. Sun sets and we enjoy sharing the kitchen campfire before heading to bed.

To be continued in Talung Two.