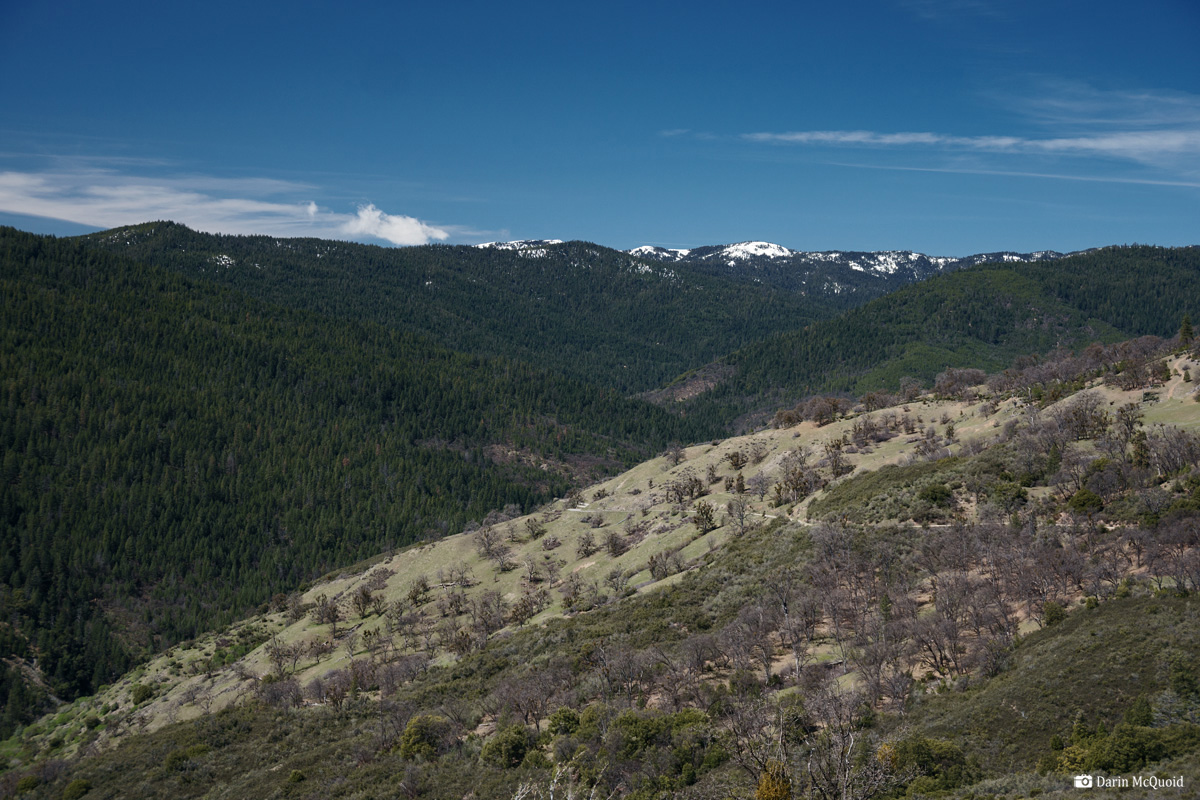 If you'd asked me about Thomes Creek a few years ago, I wouldn't even know what state it's in. Then it became a bit of an obsession. In mid January, 2017, Joseph Hatcher invited me on an overnght run. That's a rarity for January in California but we were having a warm winter. I was game, not knowing what we would be running, and off we went. In the town of Corning, we turn west and head to the east slope of the North Coast Range. I didn't look up any information on the run. Joseph said it is about 22 miles but a lot of that was the paddle out. 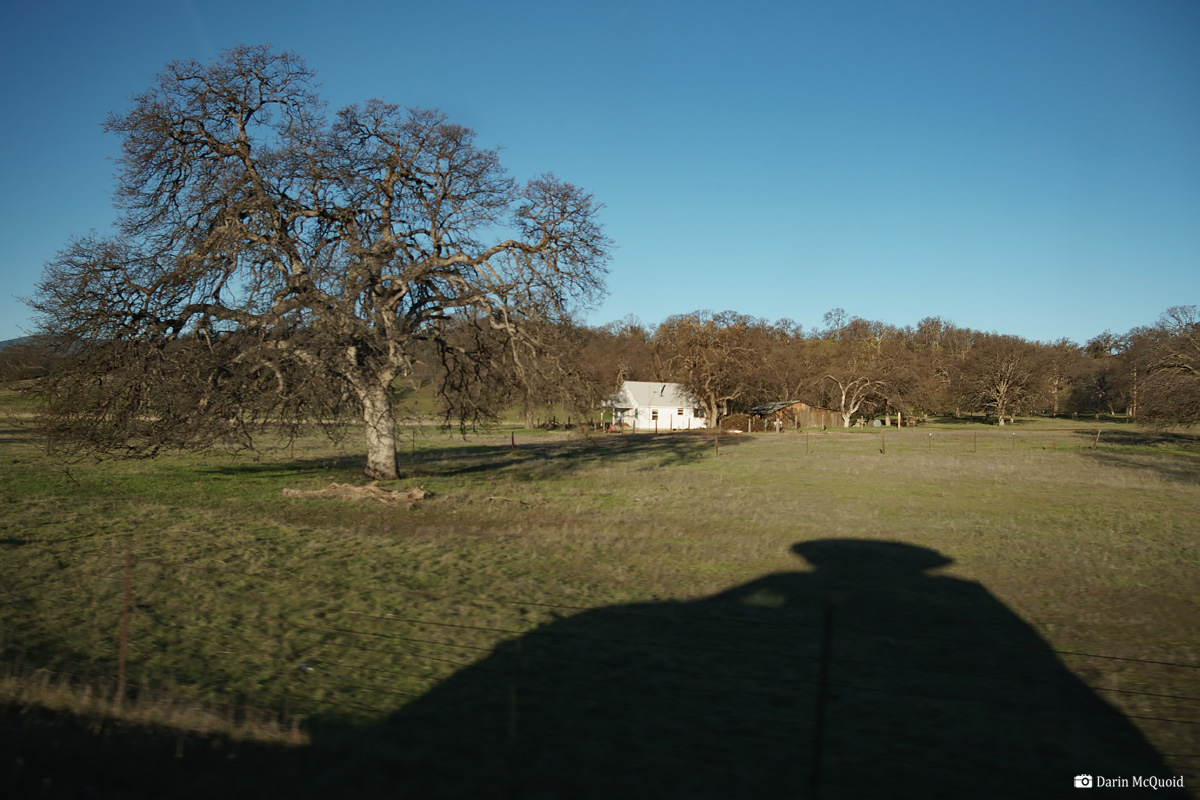 A big 4WD car, chainsaw, and 2 sets of chains. We gave it the full college effort. We could have gotten to the river, but our shuttle drivers would not have had enough gas to get back out. We turned around when we made that calculation. 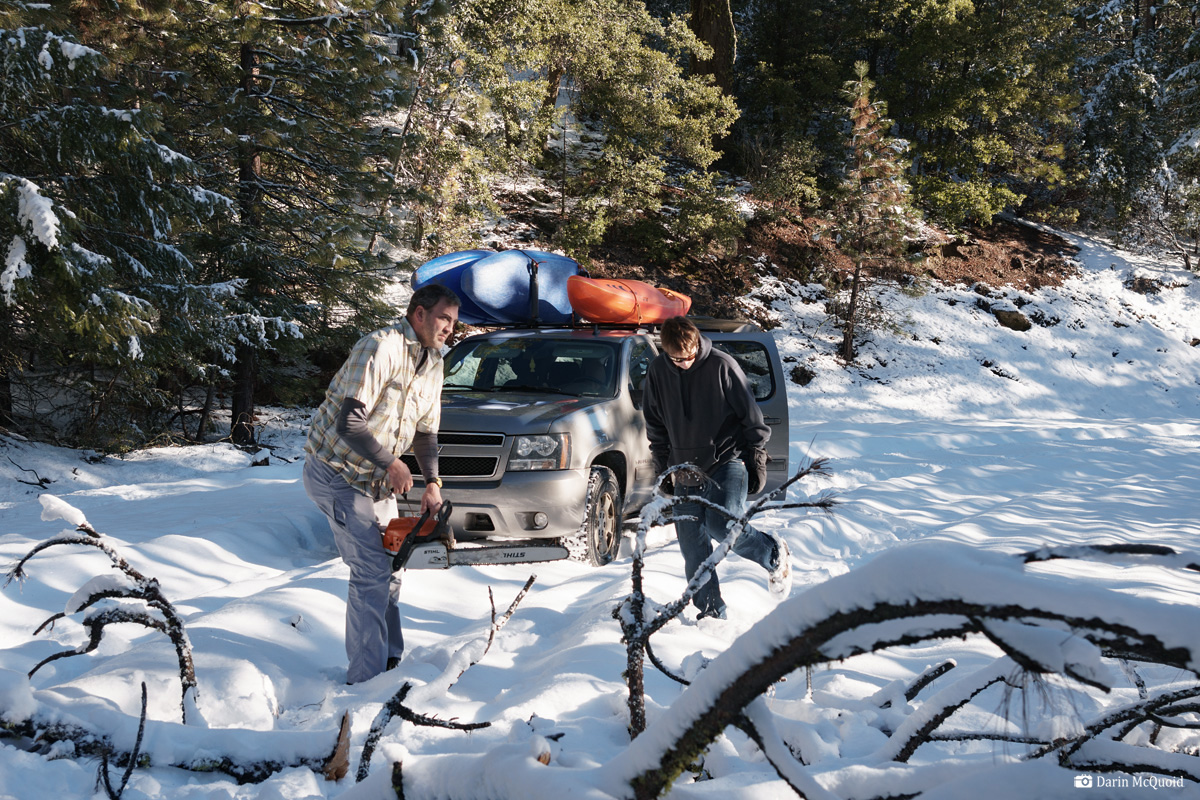 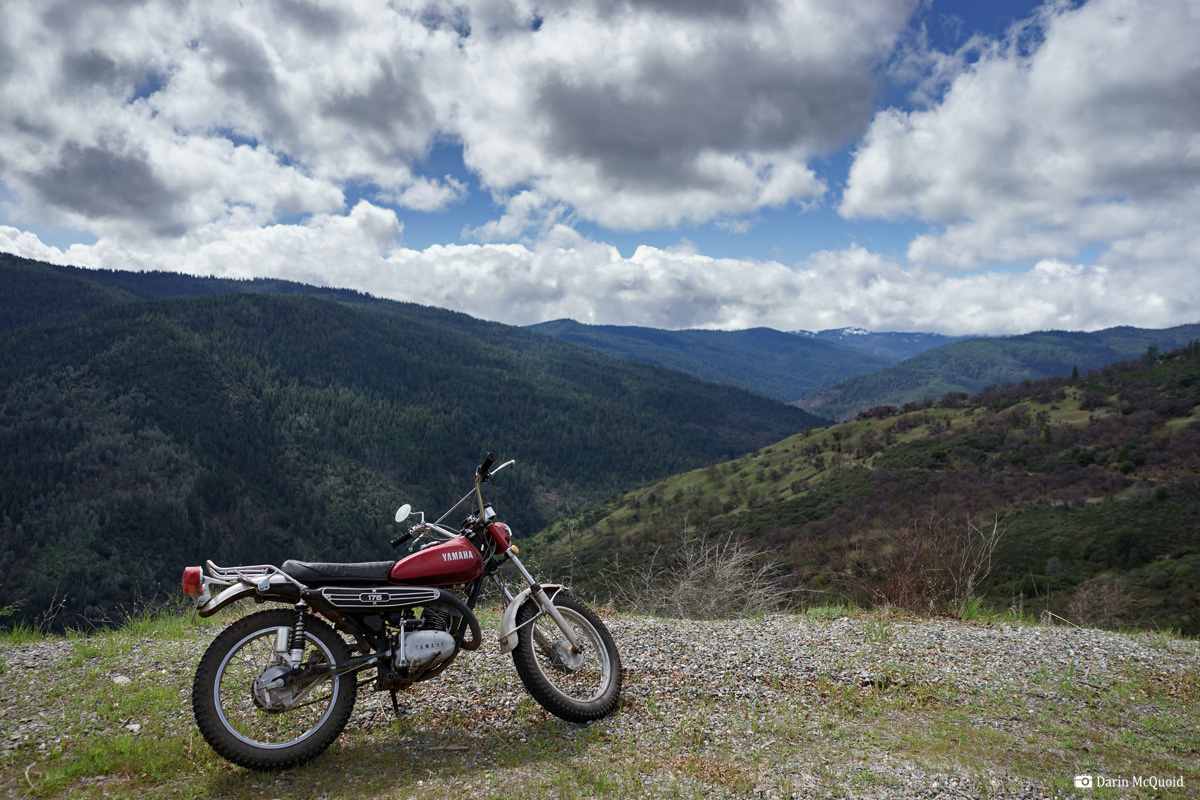 Flows are already dropping, around 500cfs here. While I'm able to make it to the put-in, by the time Joseph is free, the water is gone; it goes fast here. 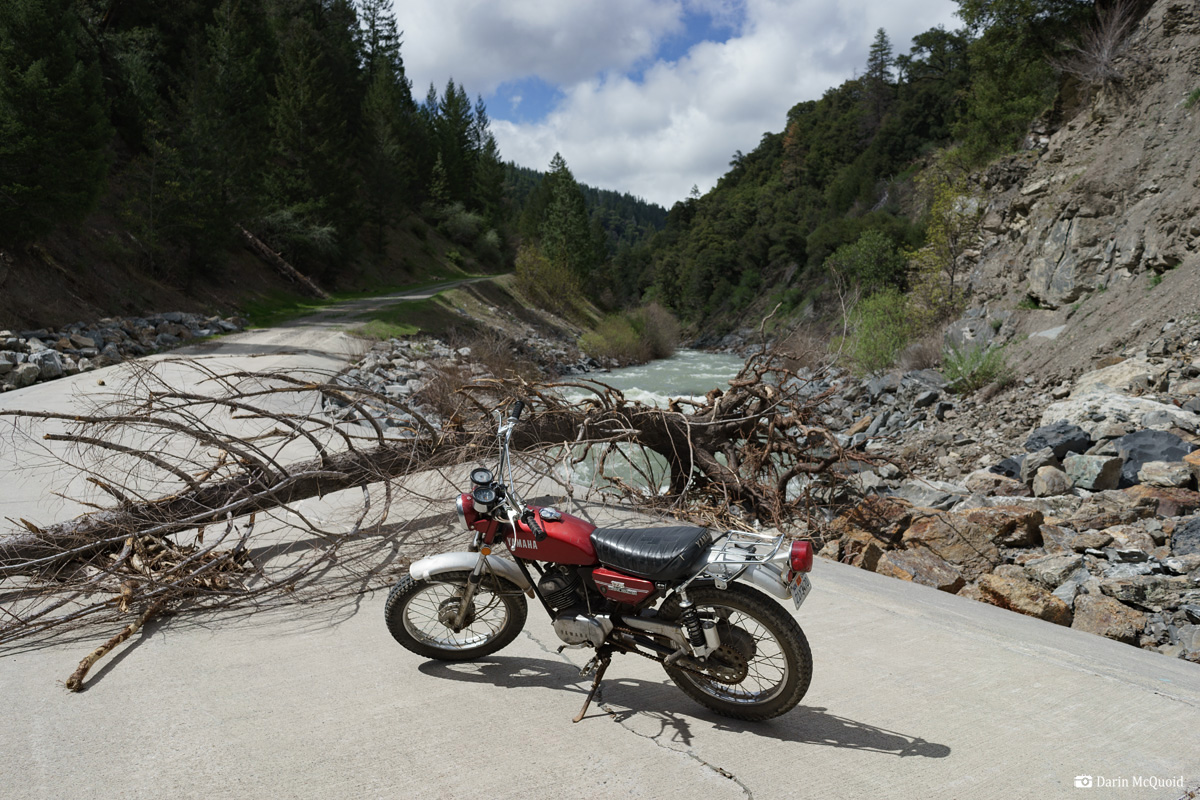 What I saw of the river looks good. One class V-ish rapid and a lot of read and run. 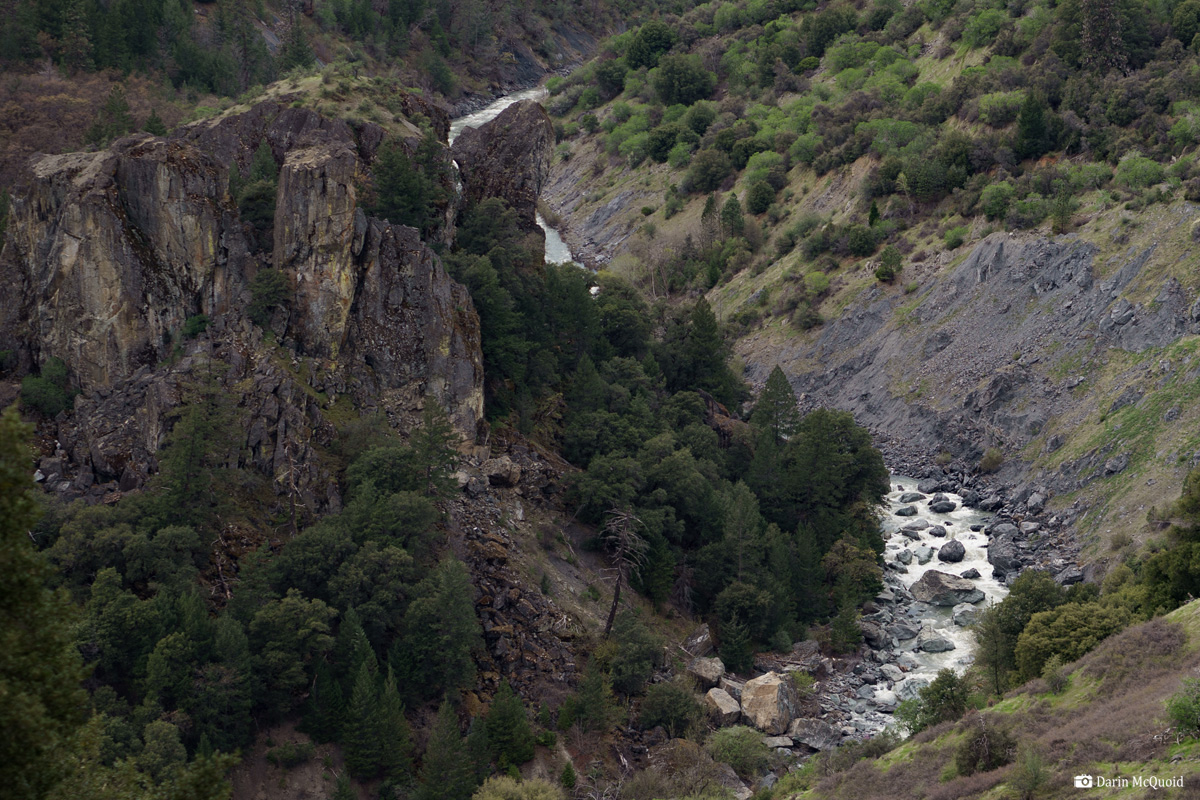 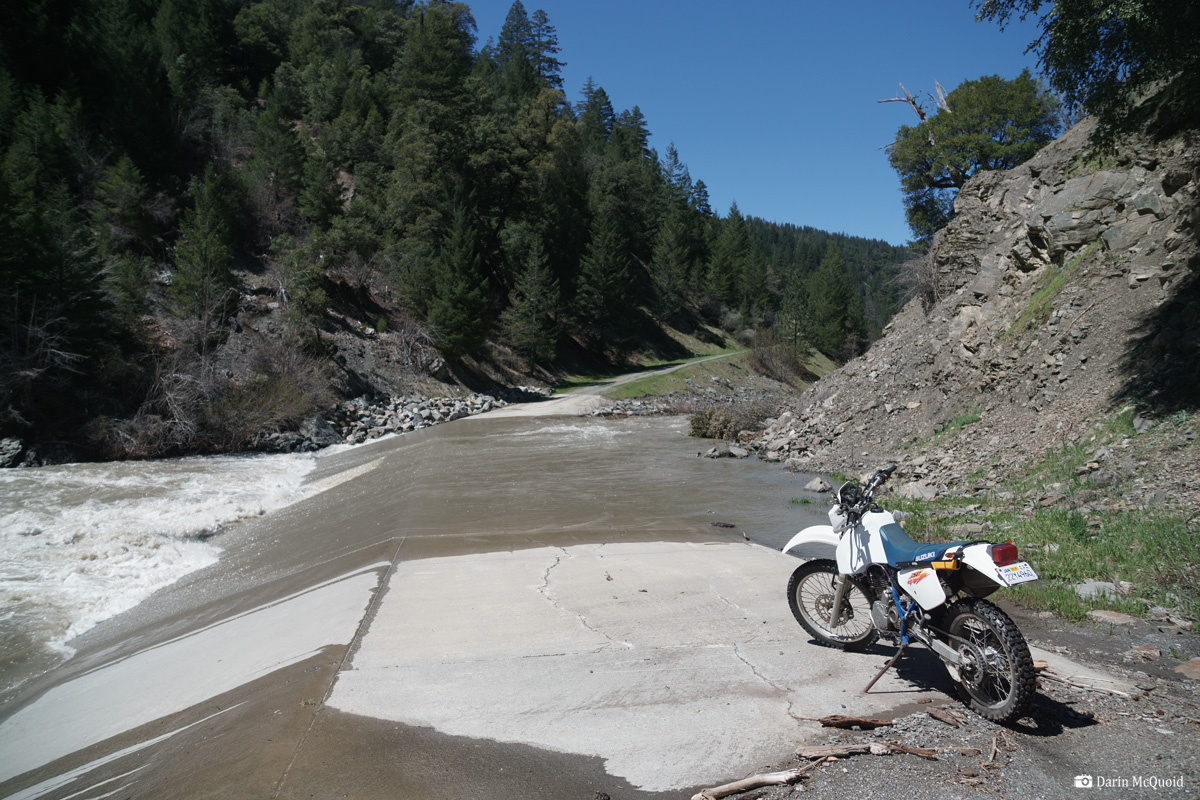 In just four days the river has dropped from over 2,000 to around 850. It's time to go. The final gorge is unusual; just before the river empties into the valley floor the walls pinch together. Above this is a small valley, and then the river drops through the gorge into the Sacramento Valley. I've done a little research this time. The river drops 80fpm over 22 miles. That's like the Scott or Cal-Salmon. I'm not too worried, even though I know the bottom 6-8 miles will be paddle out. I'm convinced there are few long term paddlers who are not overly optimistic and good at ignoring facts.

The gradient barely hits 200fpm. How hard can it be? 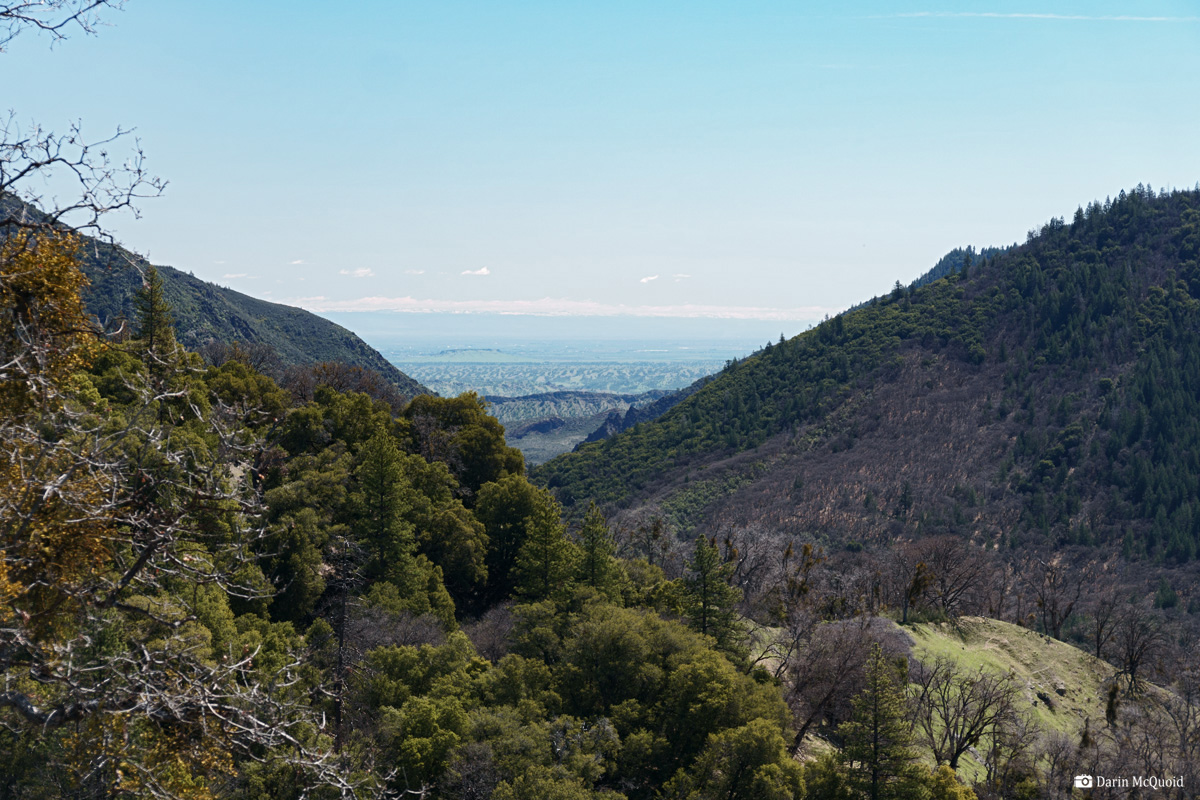 The road is in decent overall shape, just some rocks that need to be tossed out of the way. 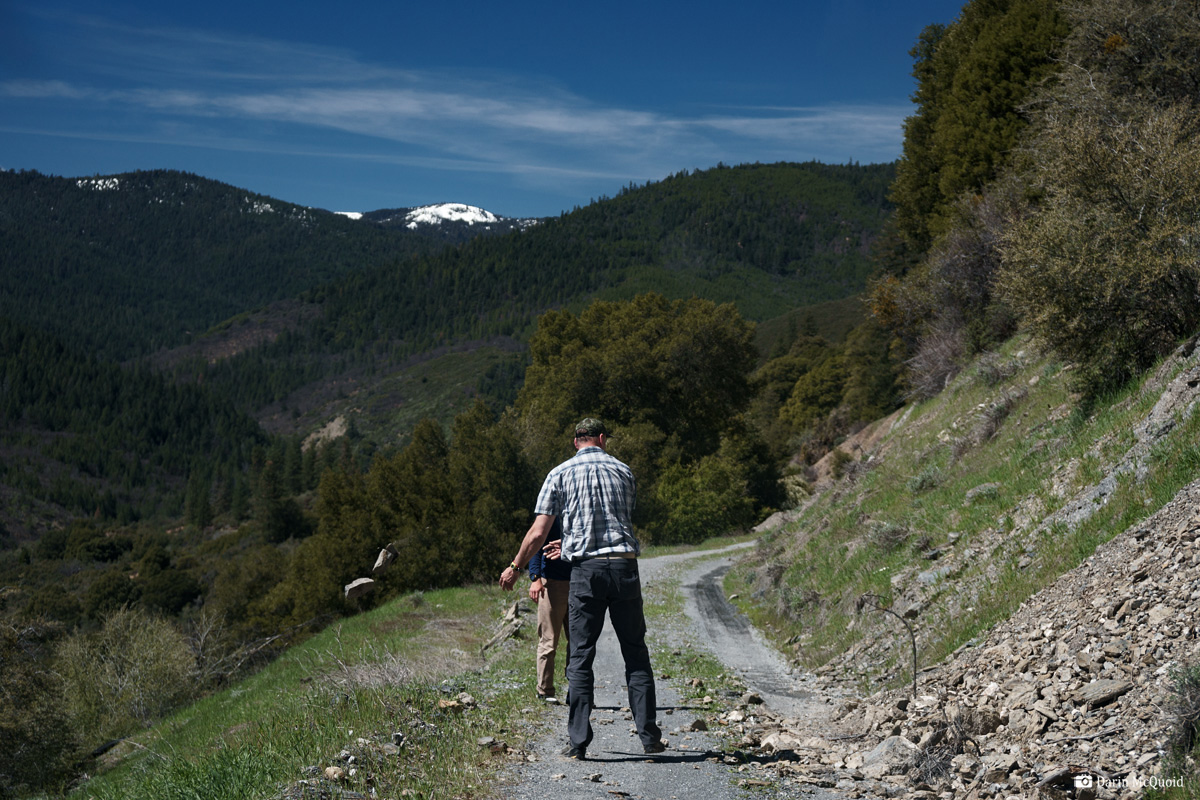 We make it to put-in at 12:18pm and don't waste time. The joy of three people. With the gradient I joke that we may paddle out today. Should be all read and run at 80fpm right? 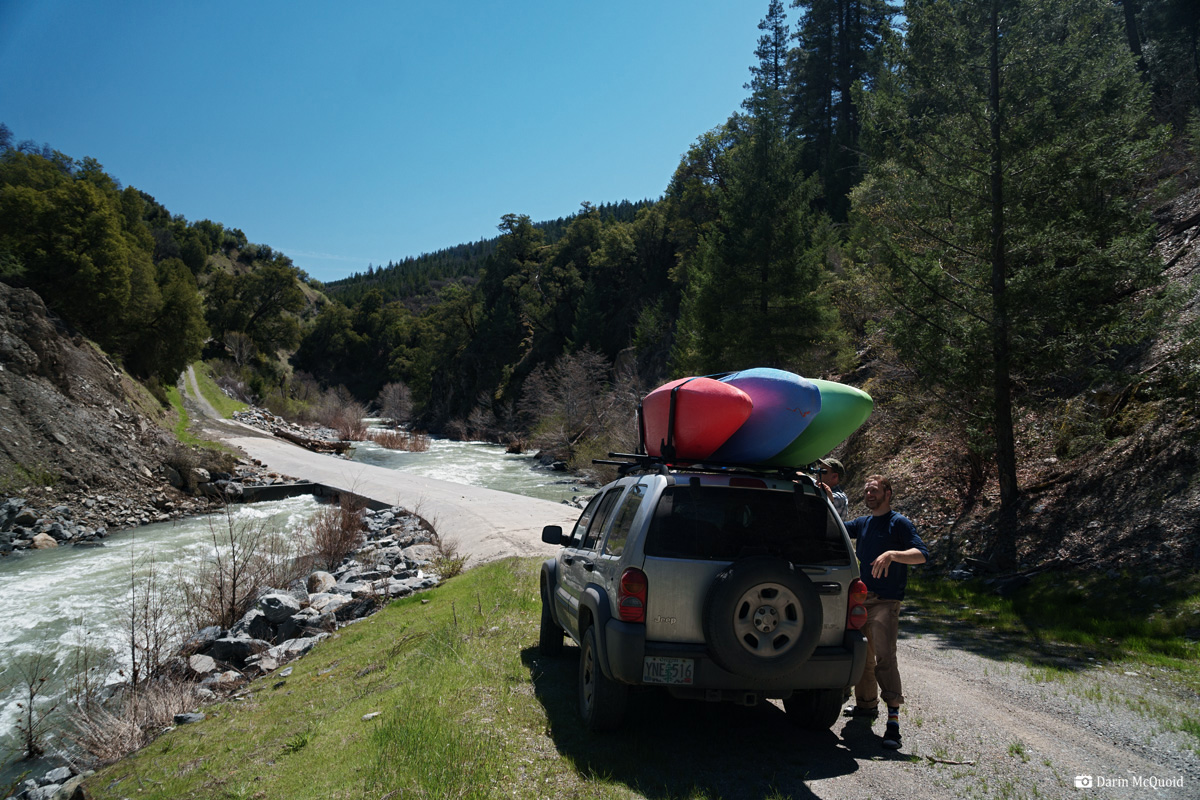 As expected, it's nice read and run down for a mile and a half down to the first significant rapid seen from the road. It's 1pm when we reach the rapid, 1:30 by the time we adjust boats and scout the rapid as we're all getting used to paddling overnight loaded boats.

Joseph Hatcher elects to probe. Note that somehow the rock on the right is undercut...on the downstream side. 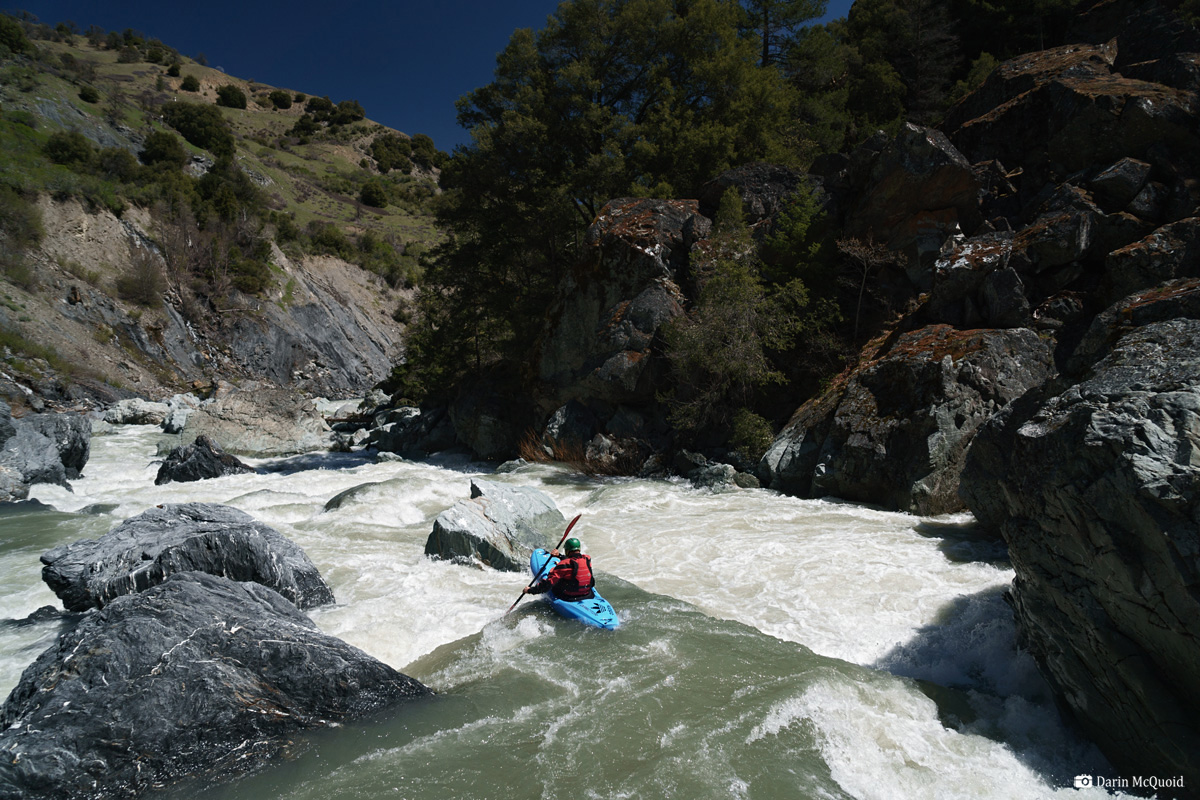 It's pretty full on, Joseph Hatcher styles it with ease. 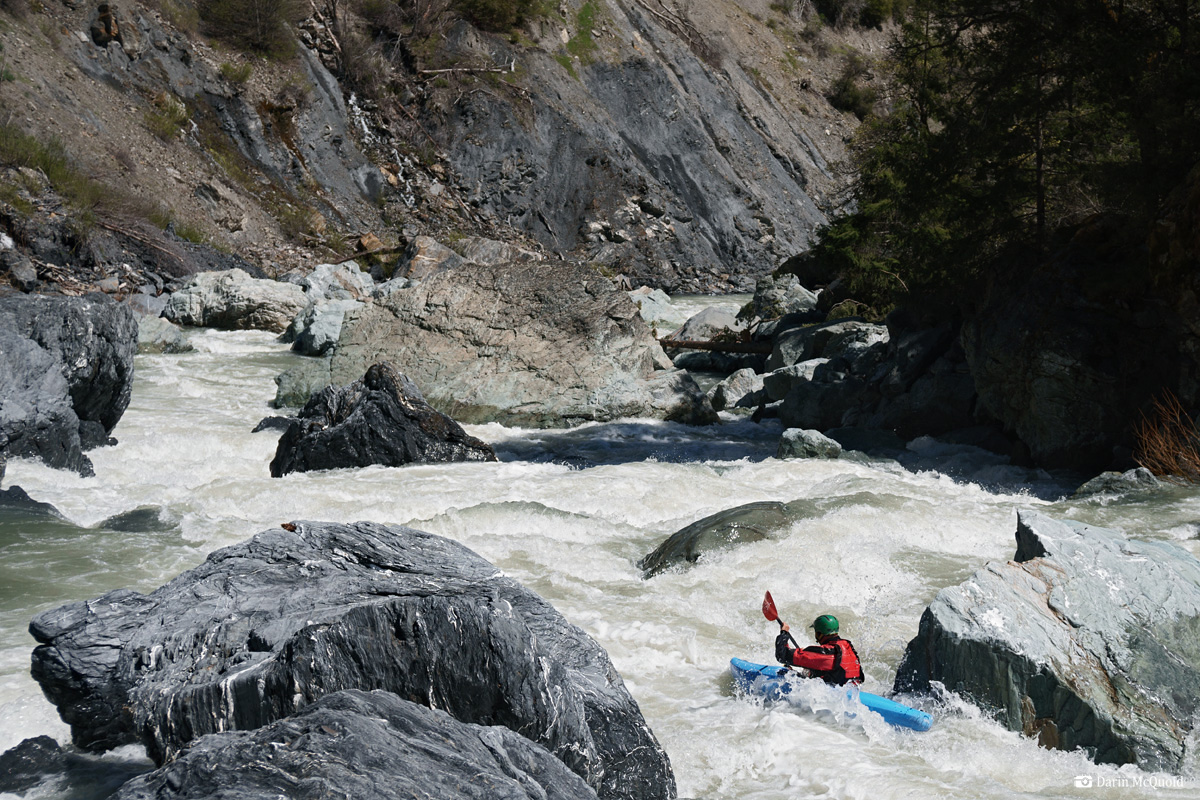 Below the road visible rapid, we have a couple miles of read and run. It's good. Really good. So good that we think this may just become a spring classic. Looking upstream at some typical read and run.

A downstream view as we drain boats and make a few more adjustments. It's a deep canyon. 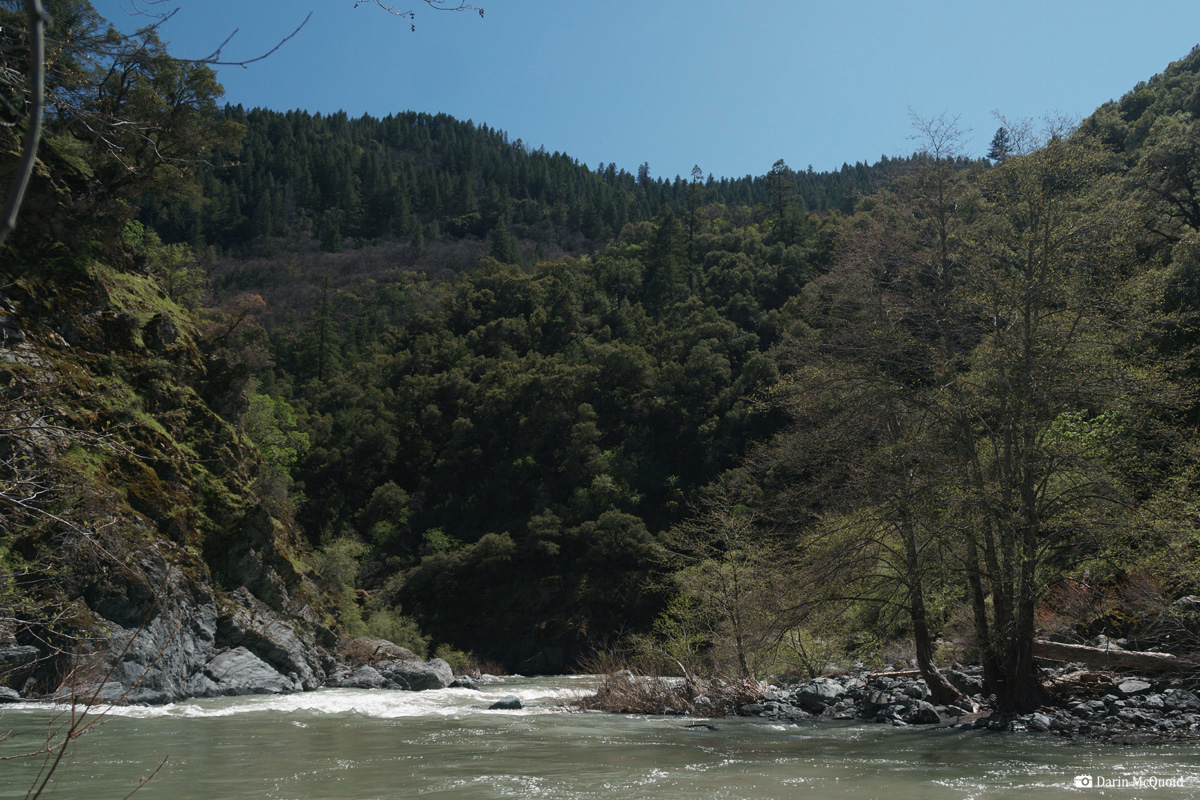 Joseph Hatcher makes his way through more read and run. 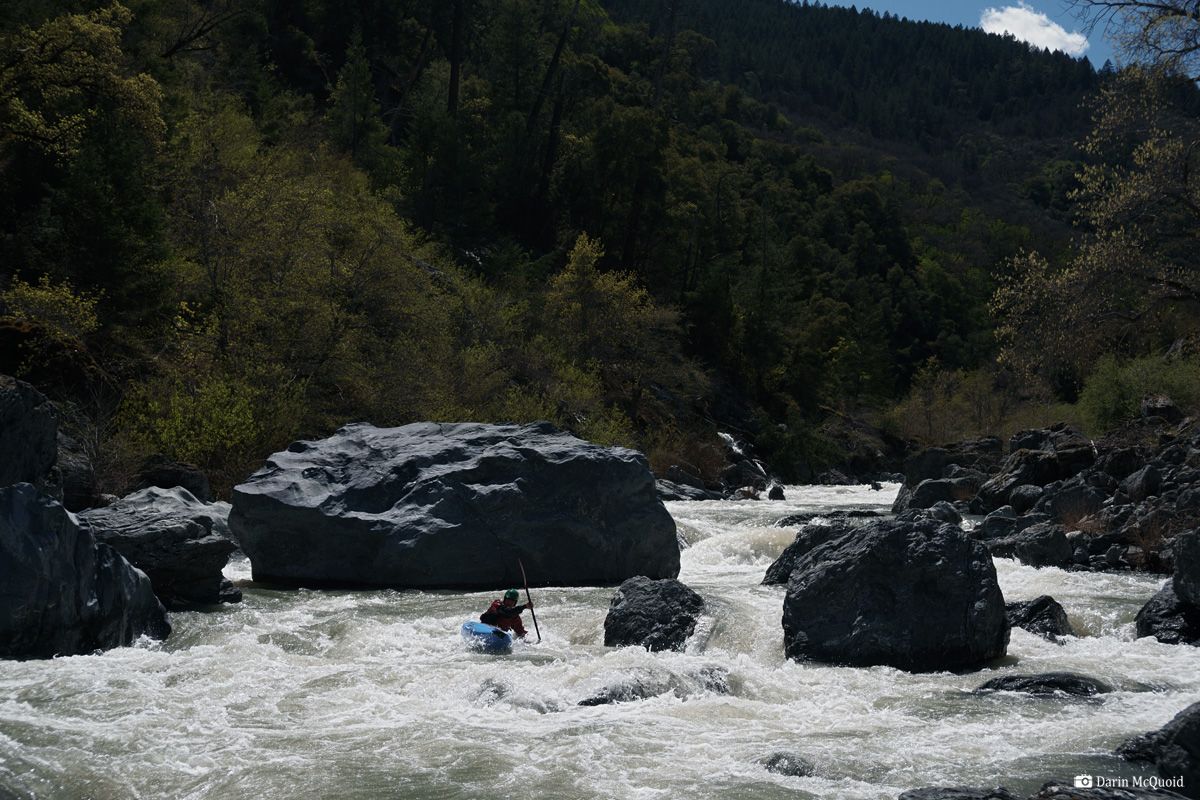 Two and a half miles since our last scout, and four miles into the run, Luke Andraka takes a look at 2:35pm. 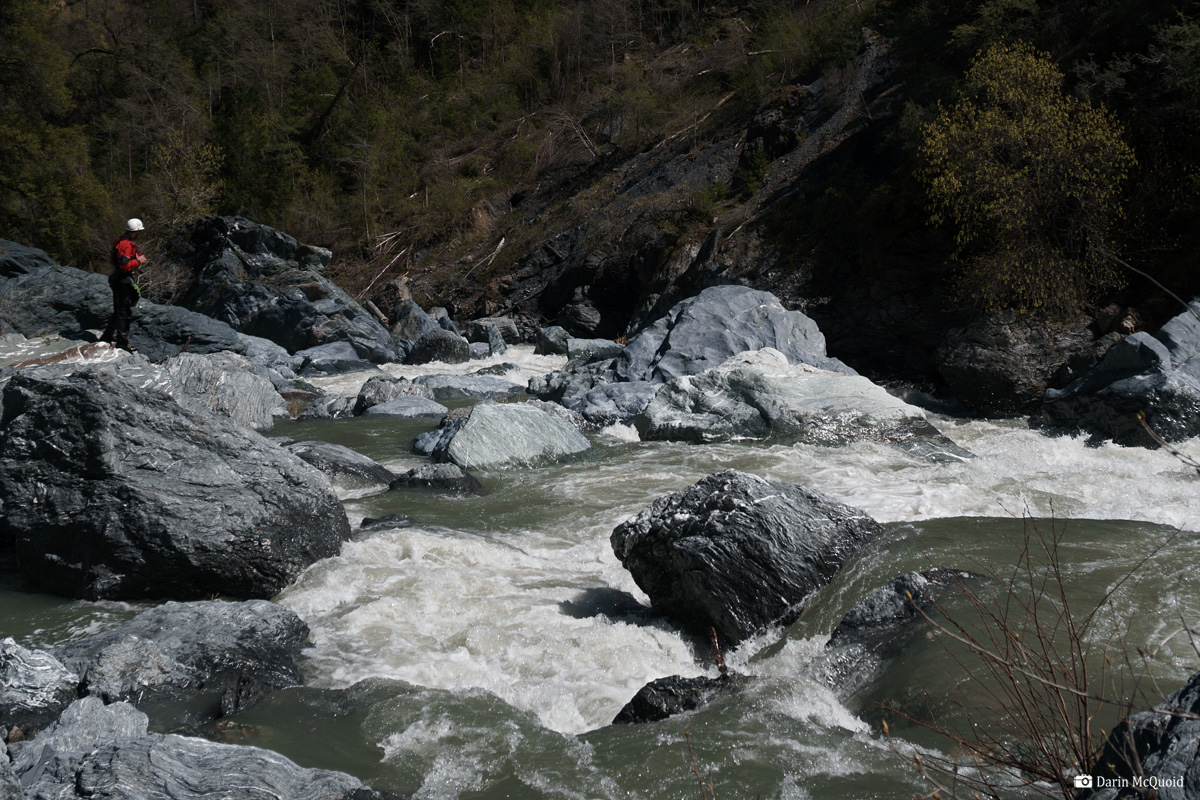 It doesn't look good. Thomes Creek somehow shows that distinction between boulder garden and rock pile; this is a rock pile with water flowing over and through it. We portage on the left. Then the rapid keeps going, so we follow a game trail higher up. 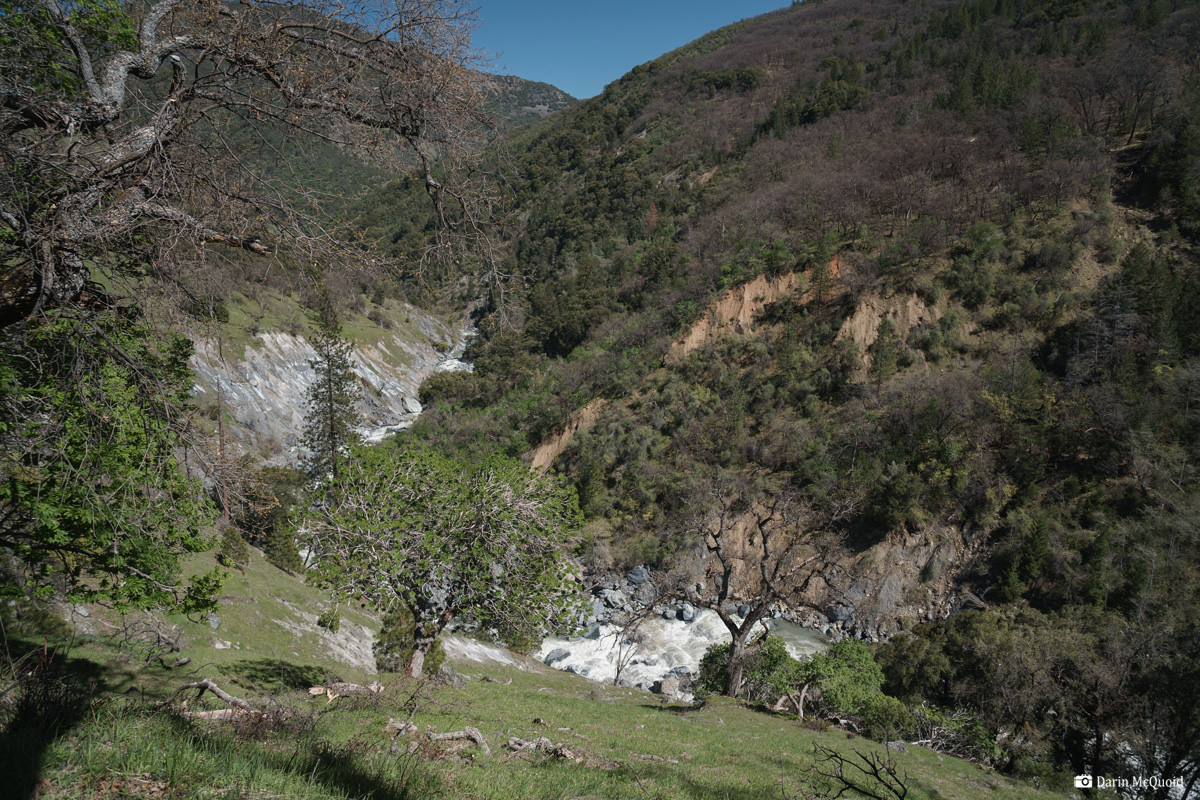 Joseph Hatcher showing that although it may be grassy, it's not easy. 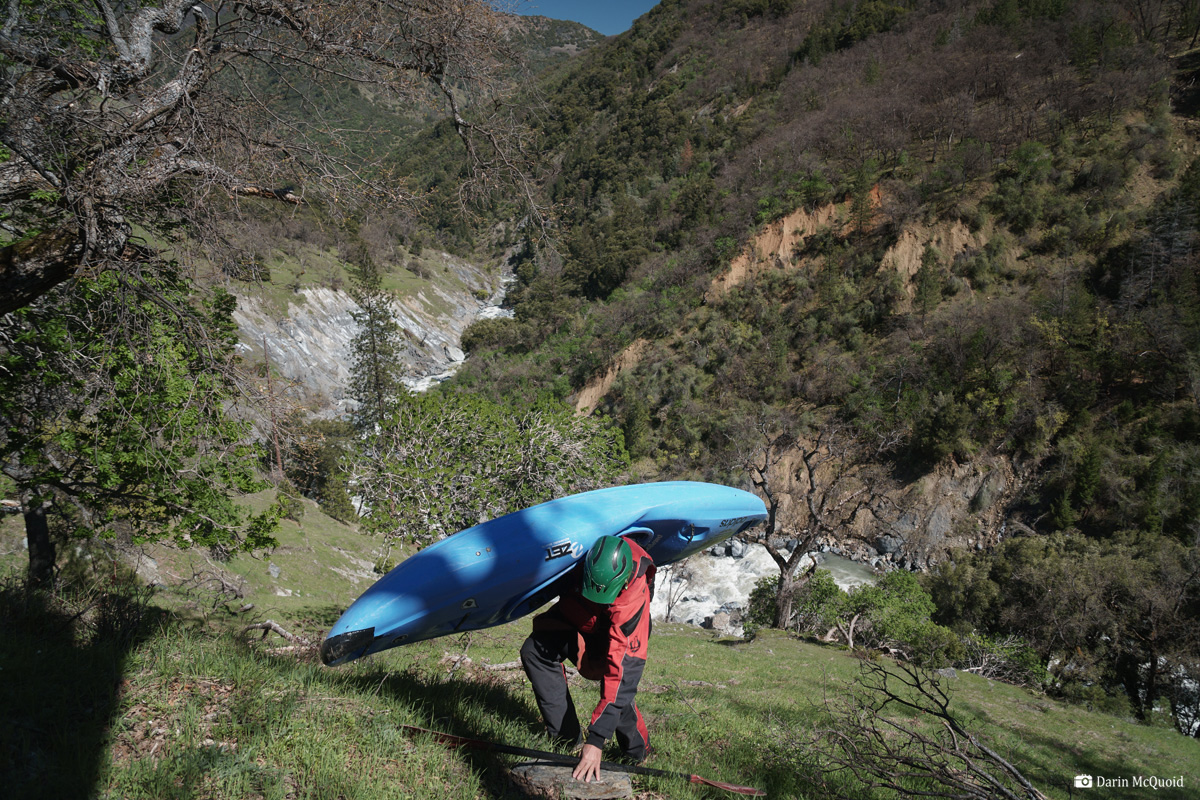 It may be a long portage, but at least it's relativly free of poison oak after we leave the river.

Looking back up there are no regrets about walking this mess. 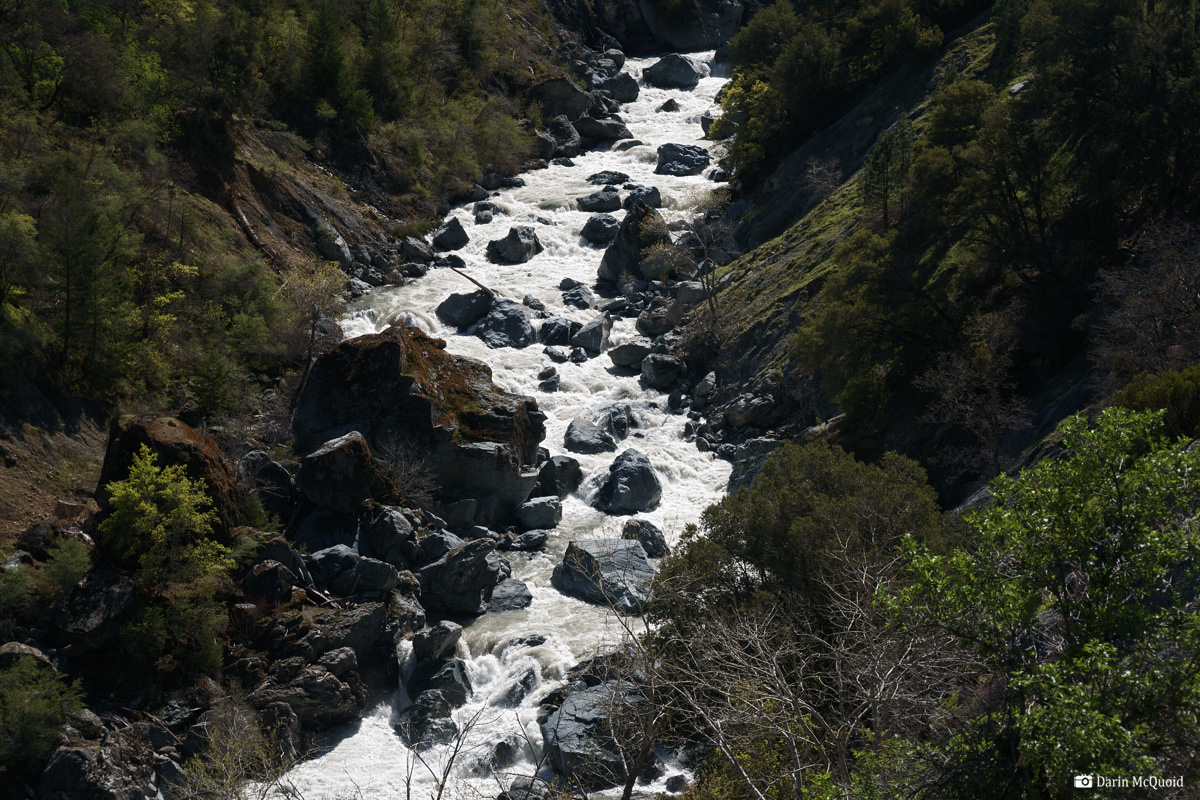 A third of a mile later, Luke Andraka makes his way closer to the river around 3:30pm. 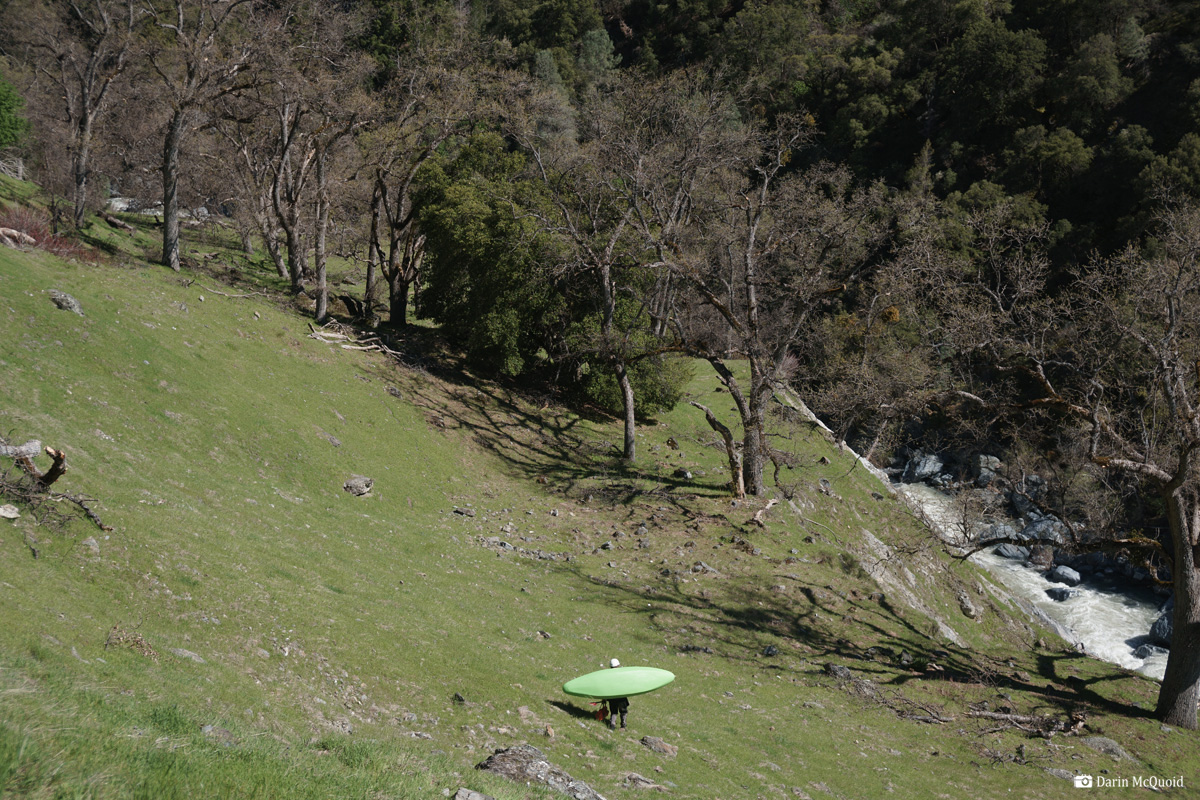 We take a rest, then try to scout around the corner but it's obscured by dense groves of poison oak. Thankfully we can put back in after a little scree scrambling. 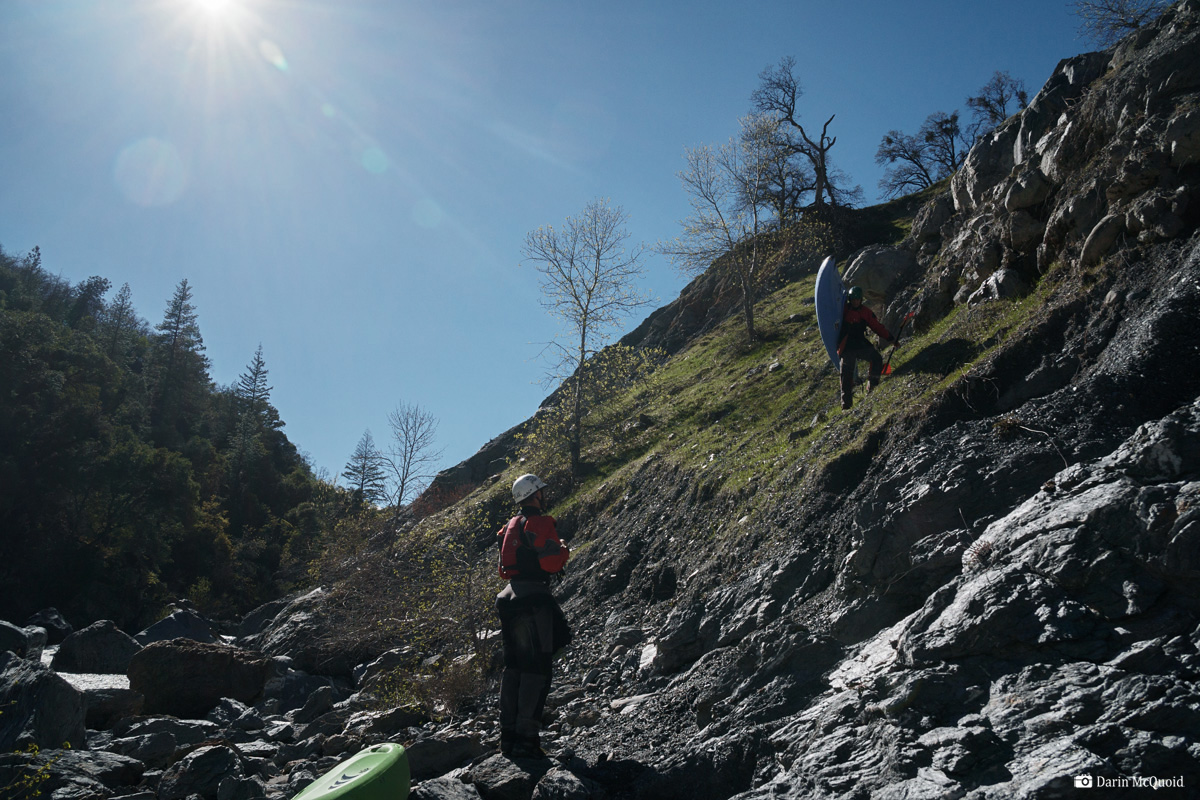 We put on and again it's classic read and run. We're amazing at how good it is, we cruise through over two miles without scouting, yet the rapids are complex and interesting. This is great. Then we get out to scout, and sure enough, it's water flowing over a boulder pile. Big sieves, and we portage over rocks and through poison oak. Mid way through the portage we put in for twenty feet, just to avoid more obnoxious portaging. 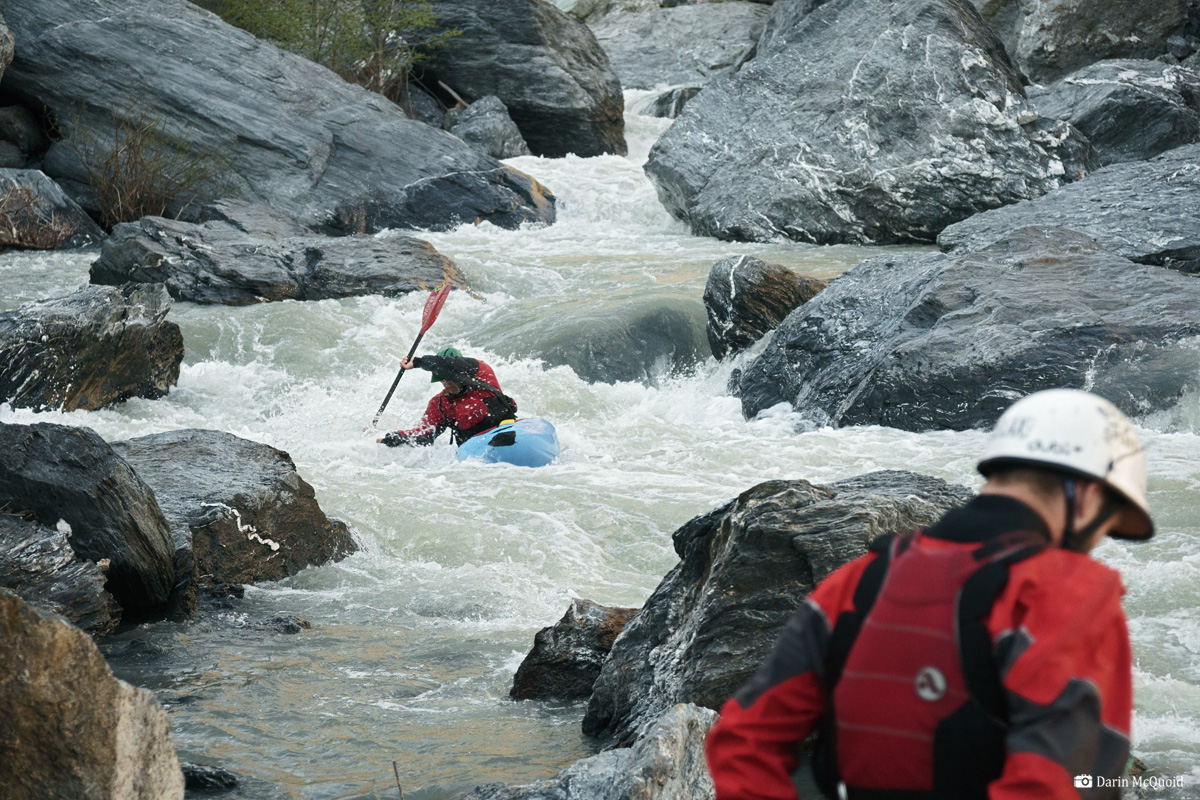 The lower half of the rapid isn't so bad, unless you swim. Then a lost kayak will be the least of your concerns. 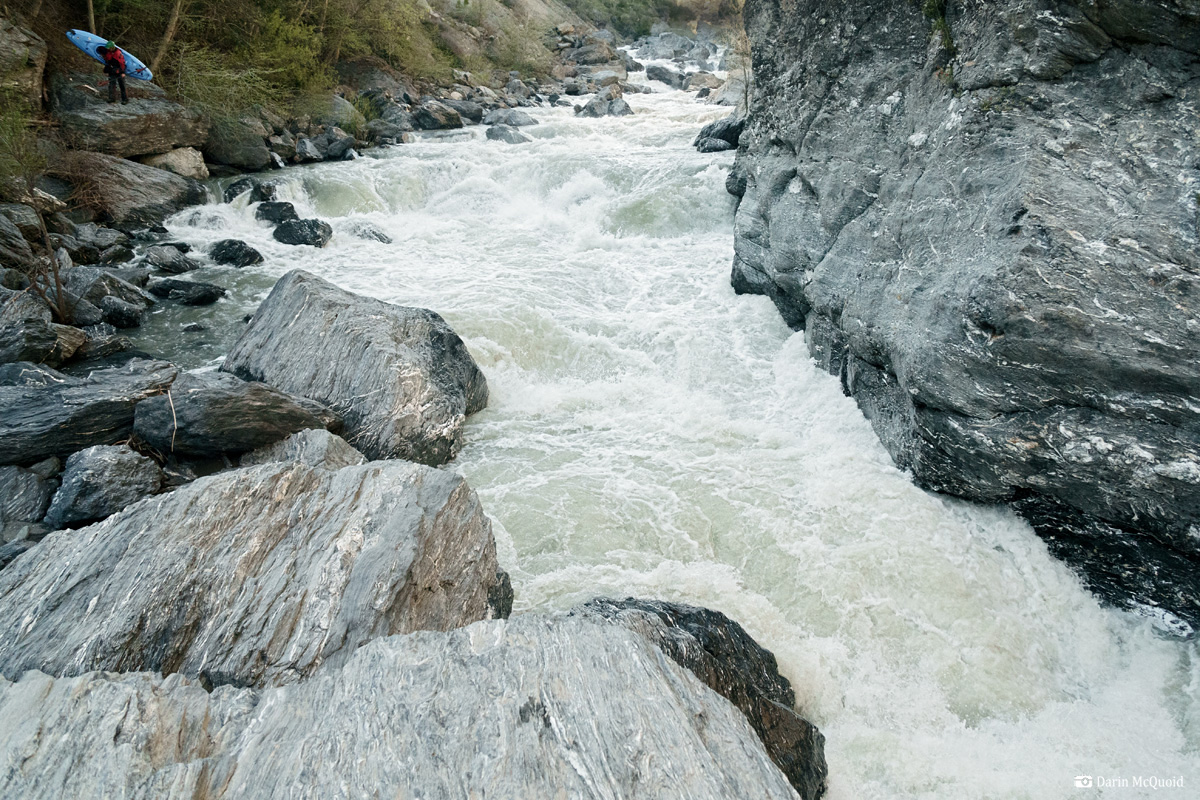 An unnamed creek makes for nice scenry as Joseph Hatcher finishes the portage. 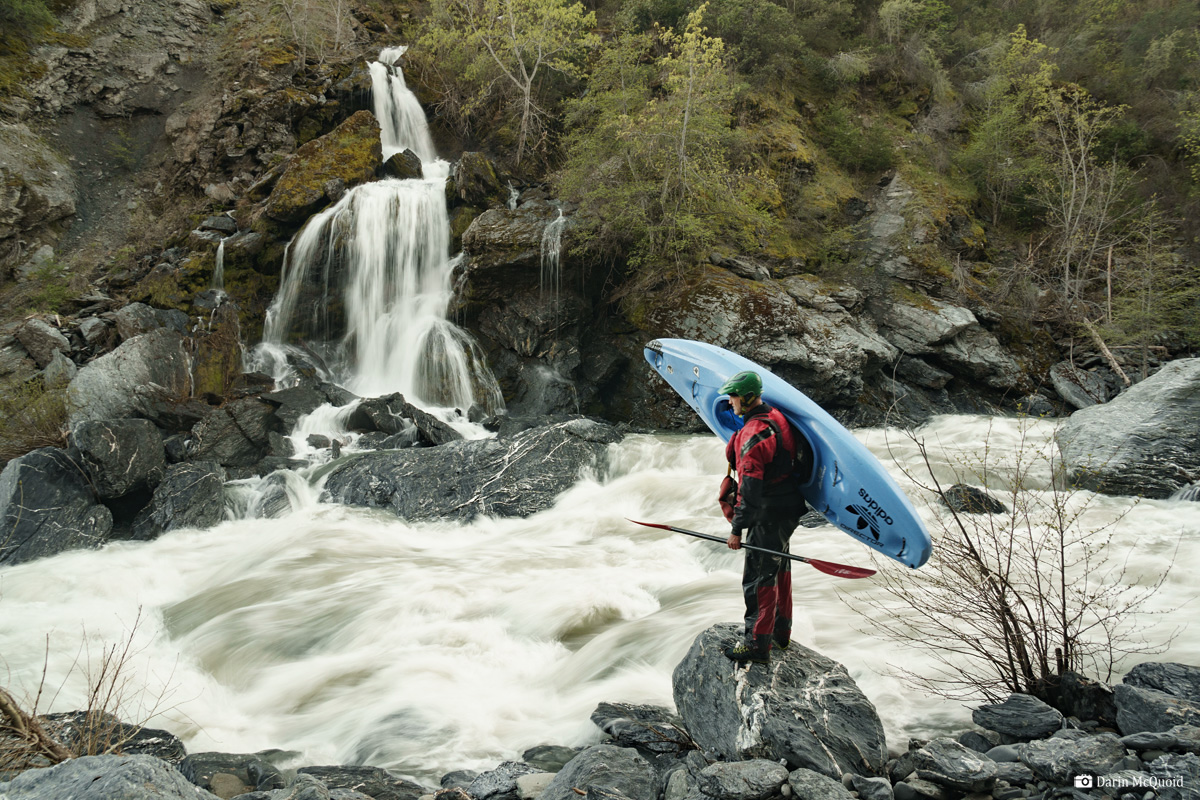 It's kind of amazing how often rivers work out this way, when you need to portage there is a route. 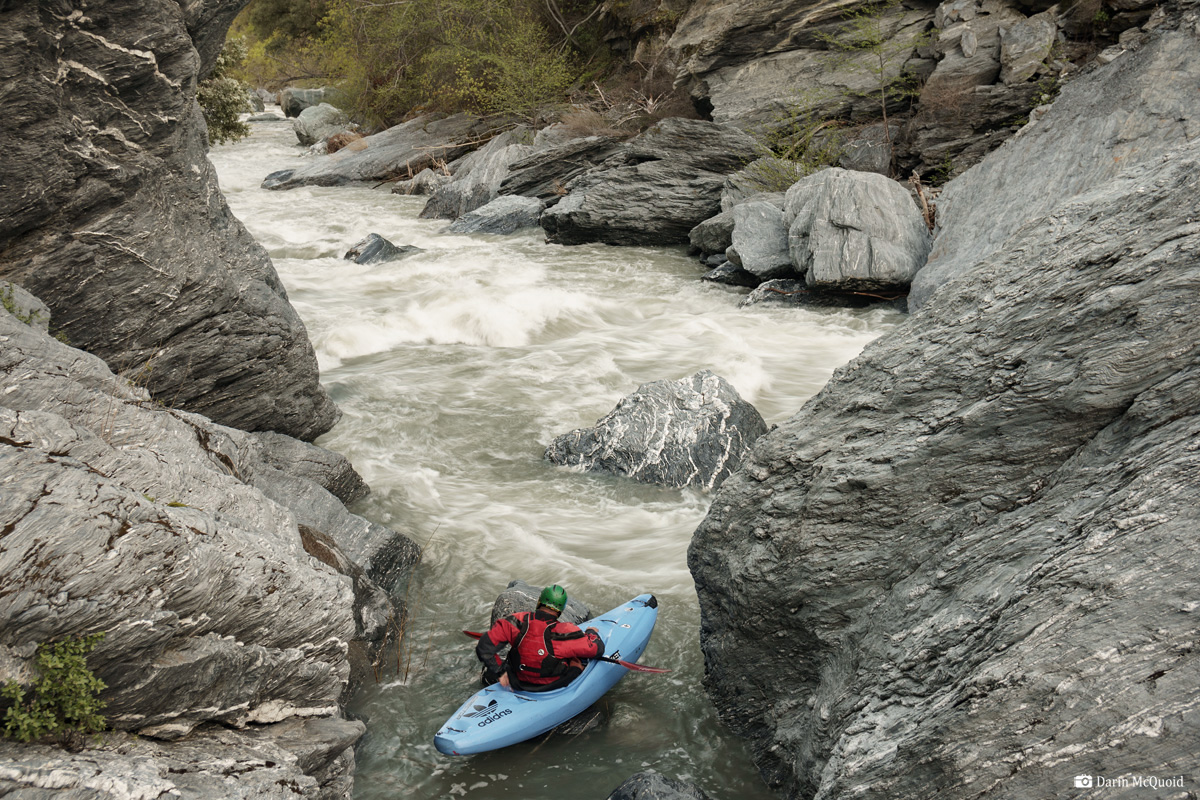 Half a mile later and we scout as Thomes Creek squeezes through a tight spot. 5:46pm. This may be the second rapid we've scouted and run in seven miles since putting on. Any other time we get out it's a portage, and the rest is read and run. Very unusual.


Good thing this one goes as it would be a nightmare to portage. 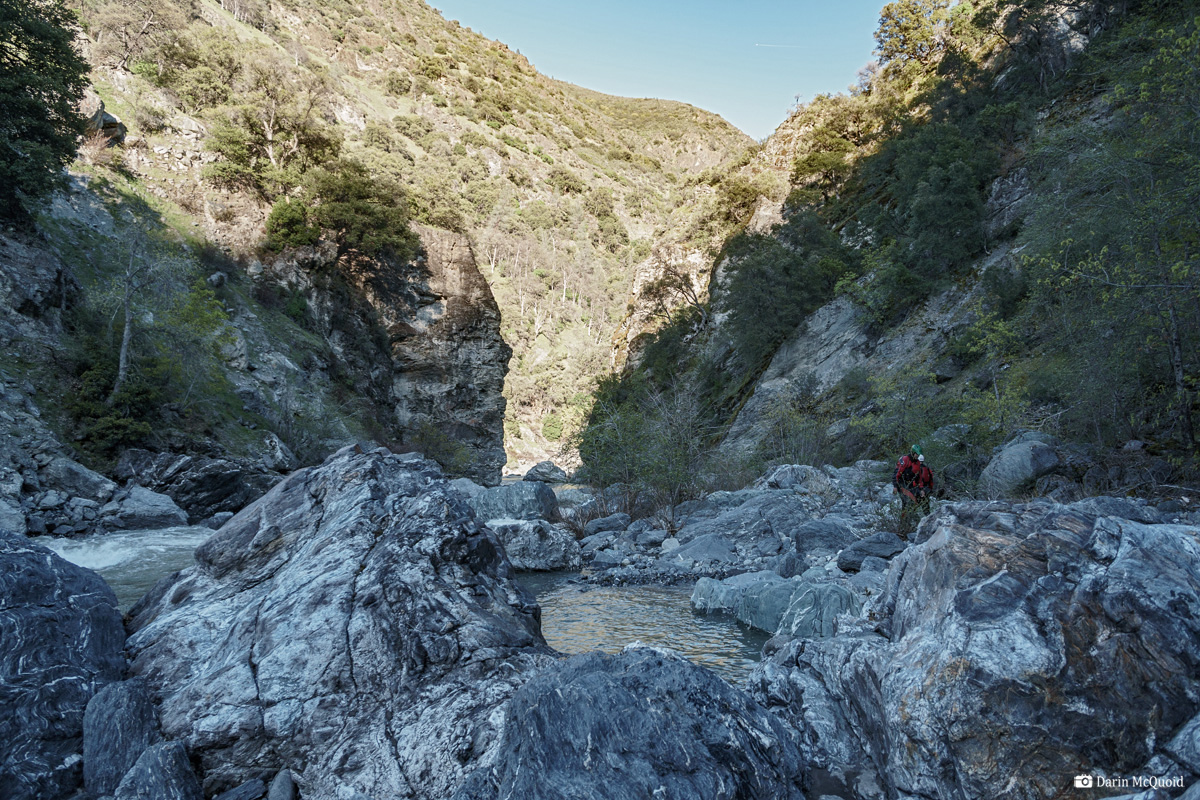 We paddled through the notch and are forced out to scout. Yet another boulder pile. We start portaging on the left, and stop halfway through to discuss our options. One team member has a torn drysuit, and is soaking wet. It's getting let and he mentions camping here, but there are only little piles of sand just big enough to almost sleep on. Almost is the key word. We scout around and find a little miracle, the first sandy spot we've seen on the trip. It's an easy choice to call ending out day here where bear prints cross through the flat area. 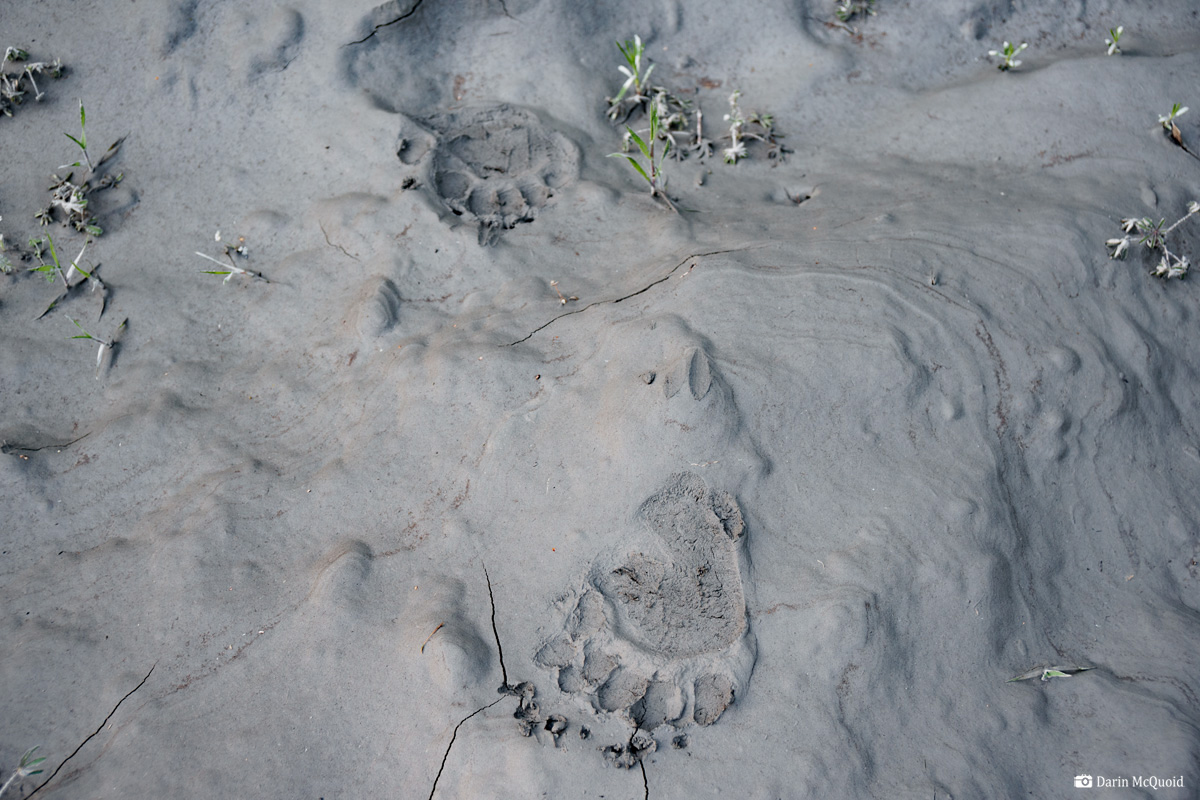 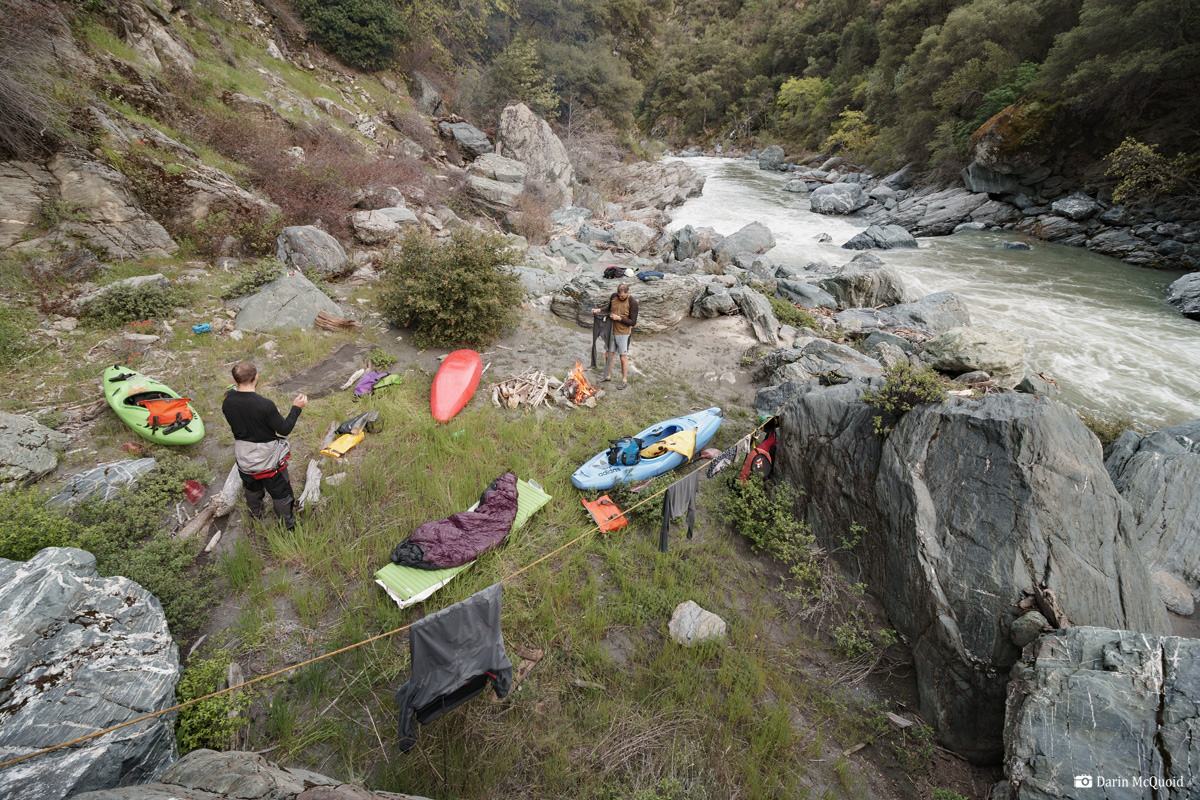 We settle in for the night, with the big portage behind us we should be out plenty early tomorrow.

On to day two.