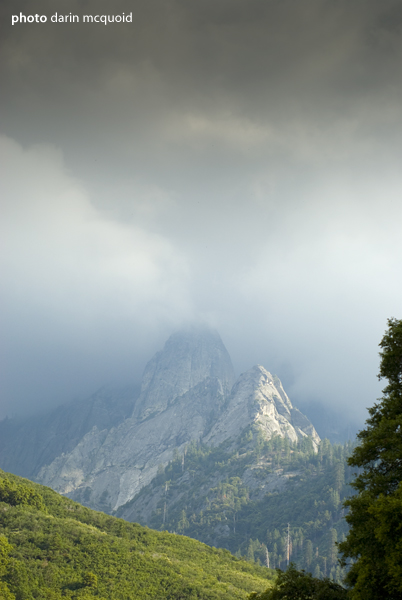 Best known from it's exposure in SLP's Burning Time 2, the Upper Middle Kaweah had only seen one other descent by the Huckin Huge crew. This is due to the infamous "Rusty's Rampage", a mandatory slide that pushes into a tenuous eddy. On the first descent three paddles were broken while folks tried to escape the eddy. Perhaps this explains why Ben and I couldn't find any compatriots for this mission, and were regaled to a twosome. We knew setting safety would be a rare luxury and lots of work, but didn't want to pass up the opportunity for good flows and cool weather, a key ingredient to hiking in the Kaweah.

The exploratory group came in through the East Fork Kaweah, entering the drainage higher up via a strenuous ten mile hike. While driving to the drainage, Ben Stookesberry and I sussed out some great beta from first descent veteran Taylor Robertson.  Hiking in from the Middle Fork trailhead, and entering the gorge at Panther Creek would put us right above the hardest "best" section of the river and take seven miles out of the hike. Running on somewhat of a schedule and lacking a shuttle, this car to car option fit the bill for our needs.


Ben Stookesberry loads up his boat for a quick overnight. 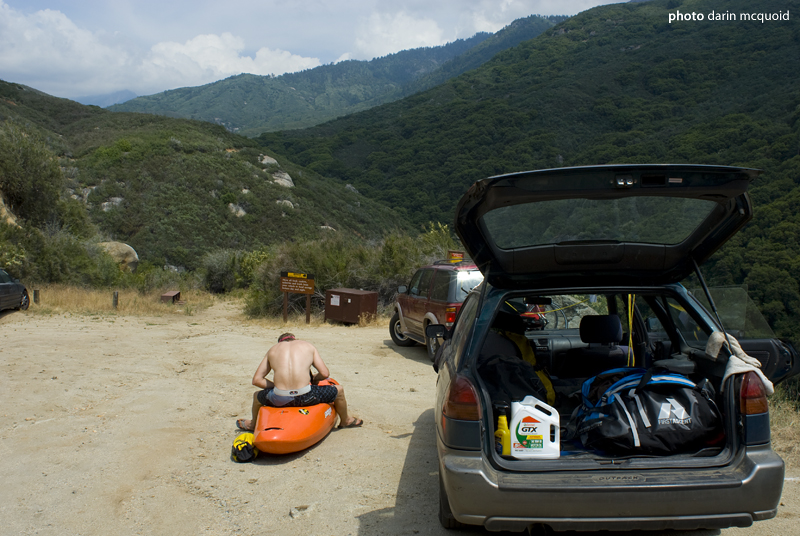 We planned to hike in, camp at Panther Creek and put in the following morning, hoping to make the push through in one day, but packed and extra nights food just in case...

The hike doesn't offer many views of the river due to thick manzanita and poison oak forests, so we kept out heads down and suffered through until we reached Panther Creek and saw the gorge.


Apparently once dropping in, we'd be "in it to win it" 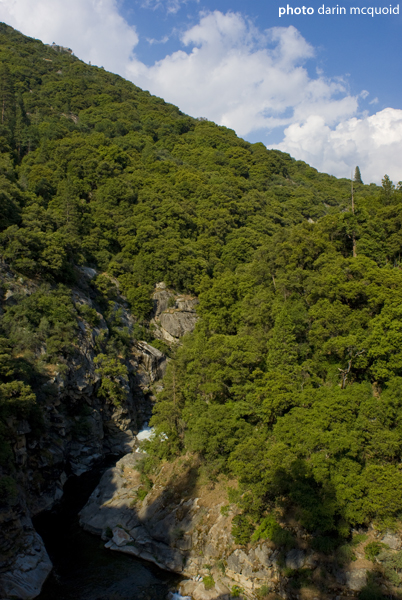 Panther Creek is host to a beautiul campsite perched on the gorge rim above the Middle Kaweah, and we quickly made up our minds to camp by the fresh water and flat ground that seemed unlikely to be available in the gorge. 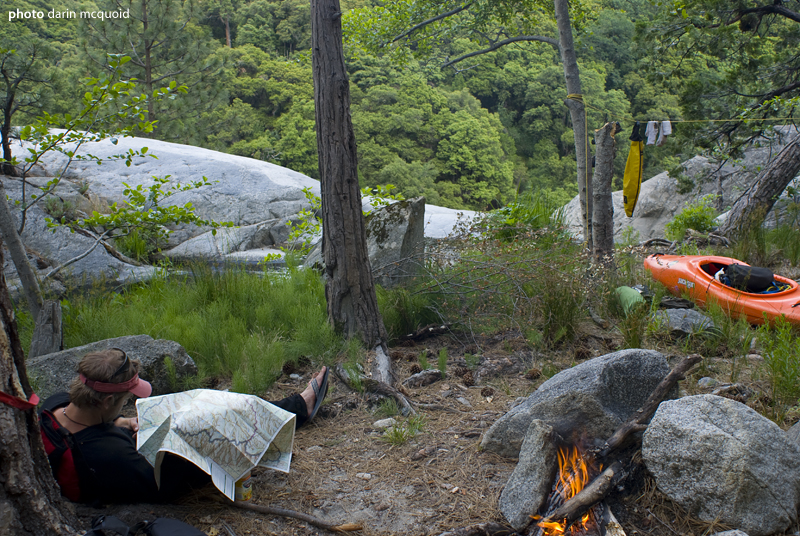 During the evening we scouted access to the river, which was a set of steep ledges that looked possible but time consuming. Ben declared it to be a "ten minute walk" to the river.  Sleeping perhaps too well, it wasn't an alpine start as we arose at eight and made breakfast. Once packed up we embarked on the steep descent to water level, being forced to rope our boats down several pitches and spend a little more than ten minutes to get below the scour line.


Looks like we should have just sent our boats down Panther Creek... 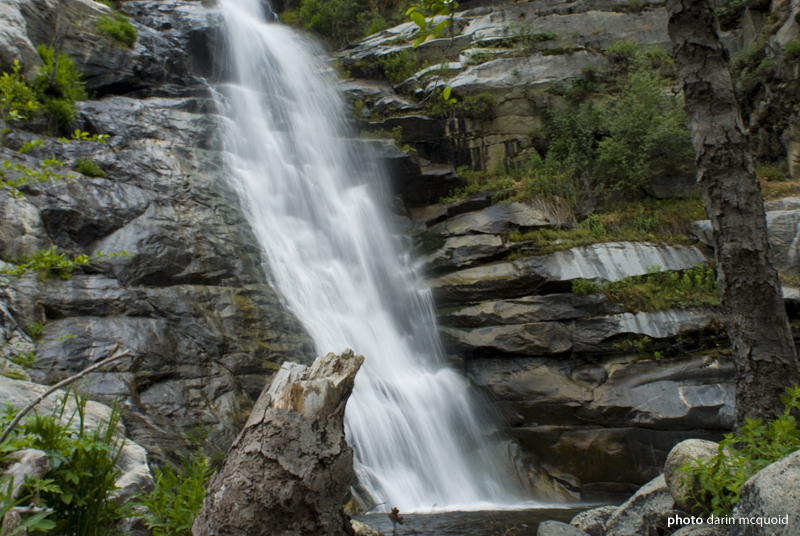 Early in the morning we geared up and shifted focus to downstream progress, something we'd have to get a lot of to finish in one day.


Ben  gets a nice warmup through the first series of rapids. 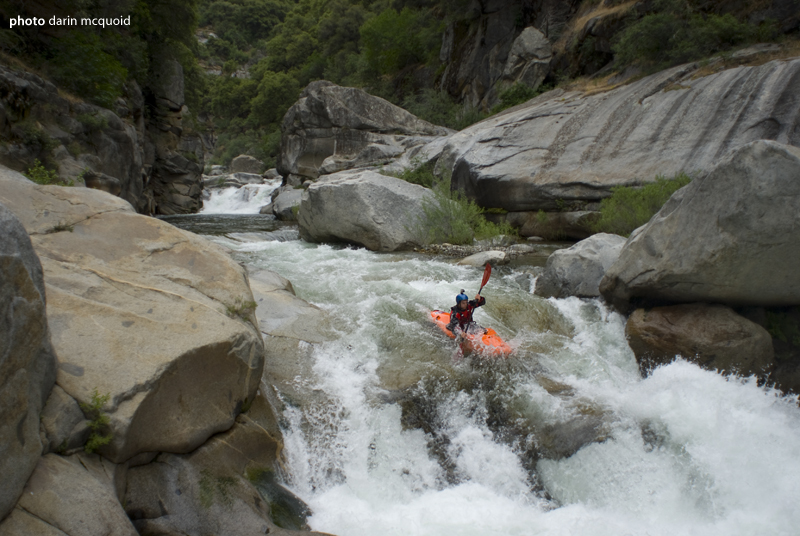 The second move of the same, seems like perfect flows and already a disturbing lack of portage options. Just like the Hospital Rock section of the Middle Kaweah, the Upper was full of polished, slick granite. Slopes that normally wouldn't cause a problem were too slick to traverse. 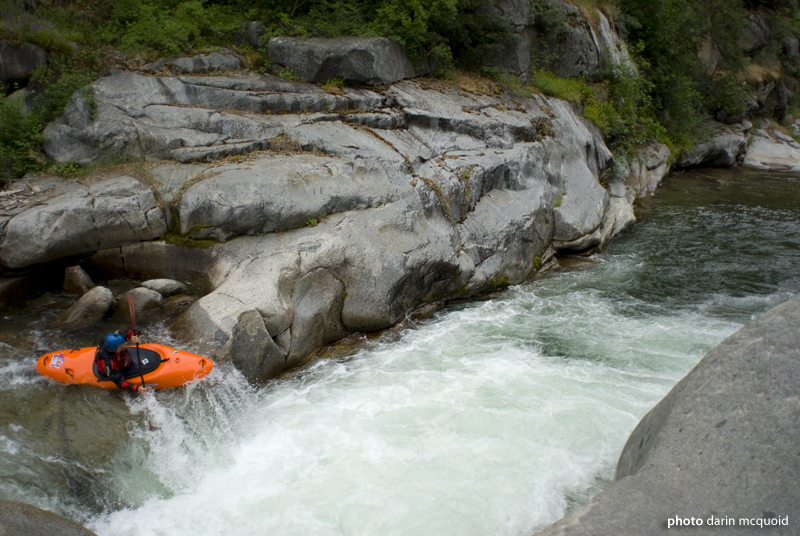 Quick scouts helped us make progress through a few more boulder gardens, here is a quick glance back upstream. 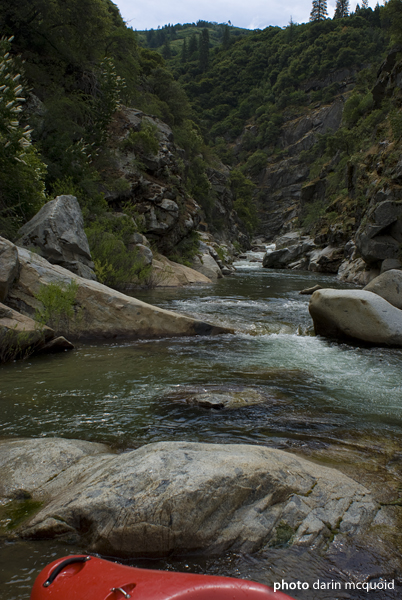 Only a few minutes into the run, we were at a rapid that we couldn't quite scout the bottom of, and had no real options but to formulate what was happening from above, on what turned out to be a very friendly route.


Better than it looks. 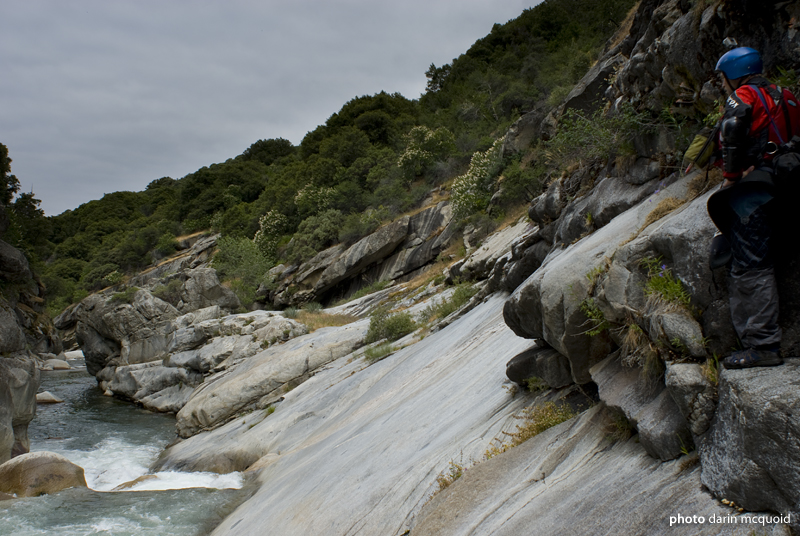 Nested in the heart of the Sierra Nevada, it was no surprise that even with steep gradient, the river maintained a wonderful pool drop character. The pools were just long enough for nice recovery without any flatwater paddling, and the rapids were improving. 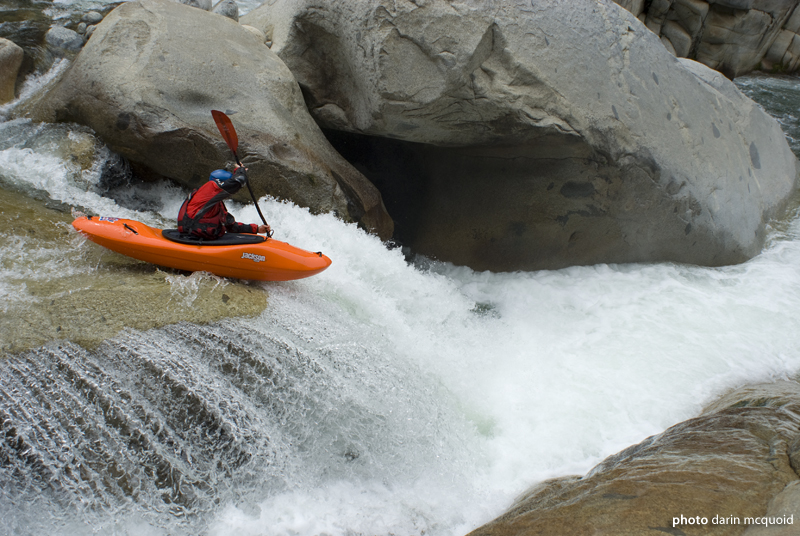 Still grinning from the nice boof, Ben and I pulled into an eddy at the top of what appeared to be a significant rapid. From the scout it was obvious that portaging would be quite an undertaking, the rapid was big, a little dangerous and there was a line.


Ben scouts one last time. He is standing level with the top of the rapid. 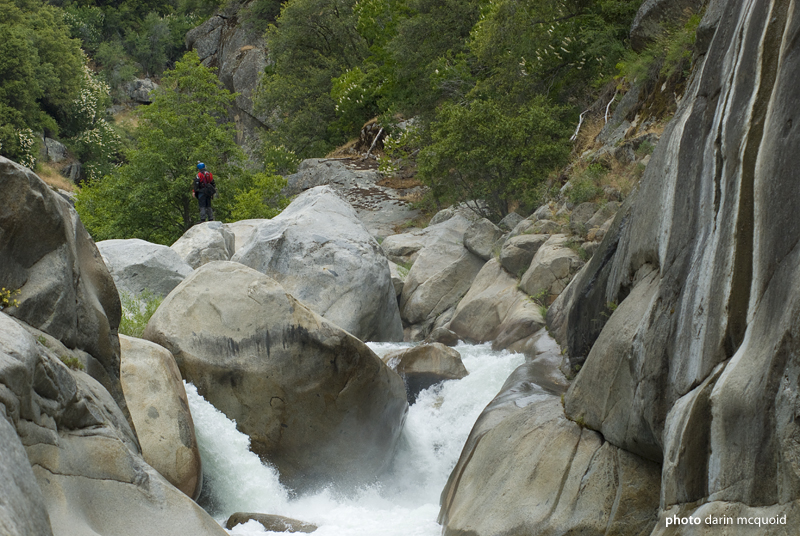 A technical lead in consisted mostly of dodging holes that fed into sieves, and one final move over a ten foot drop. The key was to get up high on the pillow and maintain enough momentum to not get pushed into the cave behind the drop.


Ben boofs at the culmination of the rapid. 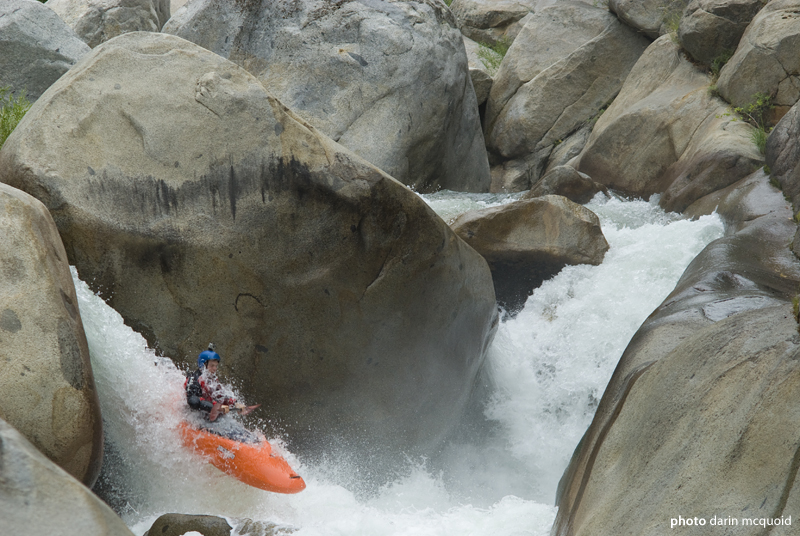 A longer boulder hopping scout revealed a narrow pinch with a nice long lead in. 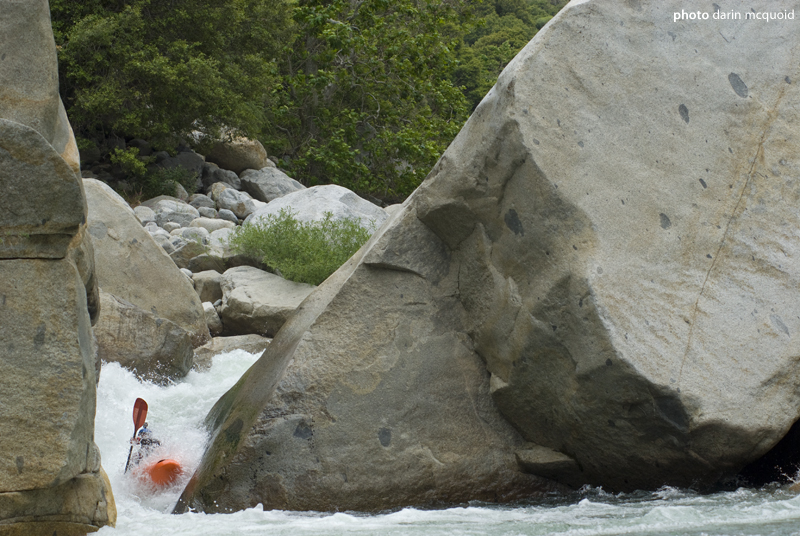 One of the most amazing things about the Sequoia National Forest and the Kaweah River that flows through it, is the constant change in flora and fauna. This section of the Sierra contains the fastest transition from foothills to the divide, and as such it's only minutes of driving to go from desert scenery to giant Sequoias.


Or a few hours kayaking. 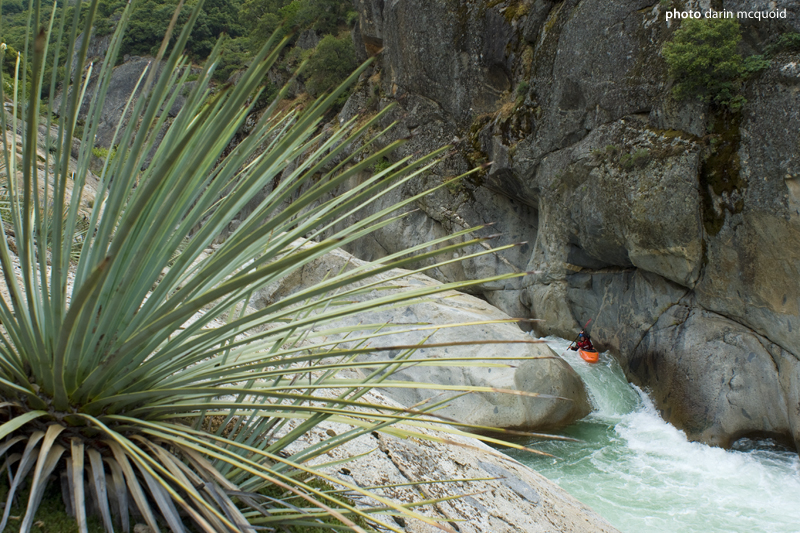 We were really enjoying ourselves at this point, soaking in the unique scenery and both secretly dreaming that we had put in below Rusty's Rampage. Right on queue we were out taking a look at the infamous slide.

We both climbed up a monolith to scout the slide, and decided it looked good, although it did also have a big entrance that doesn't get snow in videos. However, the downstream horizon was in question, and Ben embarked on a long extended scout high up the left bank to make sure we could safely make it through the cataracts.

Ben returned to a high overlook where he could set safety and film a unique angle, signaling for me to eddy out between drops to receive more beta. On our initial scout we both agreed the ideal line was a different approach than that made by earlier runs. Everyone had tried to come in on the left, but driving hard and trying to force their way to the right side. The slide banked from right to left, and this obviously didn't work, with the success ratio hovering around 40%. The higher you climb, the higher you fall, in this circumstance back to the left and the subsequent eddy.

We decided to come in on the far left, but nice and slow. In a situation like this angle is more important than momentum (since you couldn't get any up the banked turn) The key would be to wait until past the banked turn and take two strong left side sweep strokes to make sure our bow was pointed to the right in the outflow of the slide.

I came down through the entrance, cruised through the slack water between an eddy on the left and the main flow, and dropping into the slide on the far left, nice and slow, and waited until I was past the temping boof flake to take my left strokes. I took two big left strokes but was in complete whiteout, not sure where I was heading until I hit a fluffy pillow on my left, rolled quickly and was fired up to be floating in the river right eddy. Ben then gave me verbal to run the next mean double drop, and helped me out of my boat to set safety. Climbing around on the polished, sloping granite slabs was much more frightening than running Rusty's Rampage, but safety needed to be set.


Ben Stookesberry lines it up on the left. 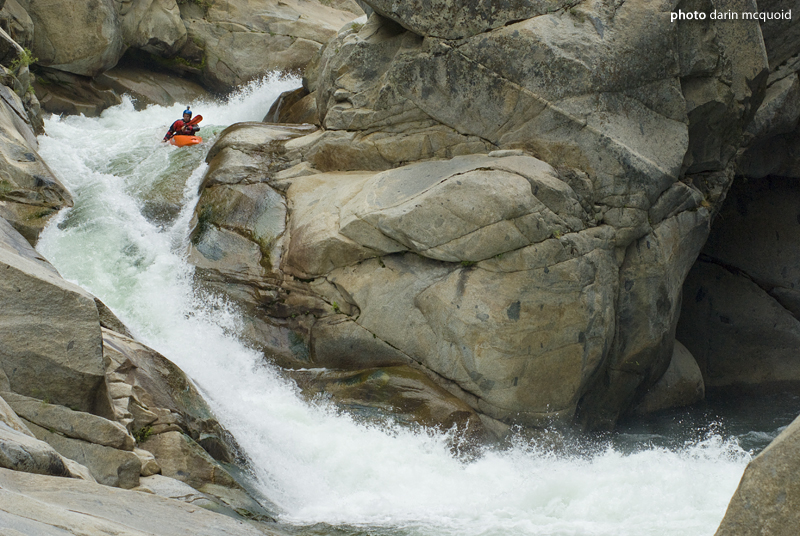 As Ben vanished in the bottom I was worried he was going to the left eddy, but he held a strong angle and resurfaced upright on river right. 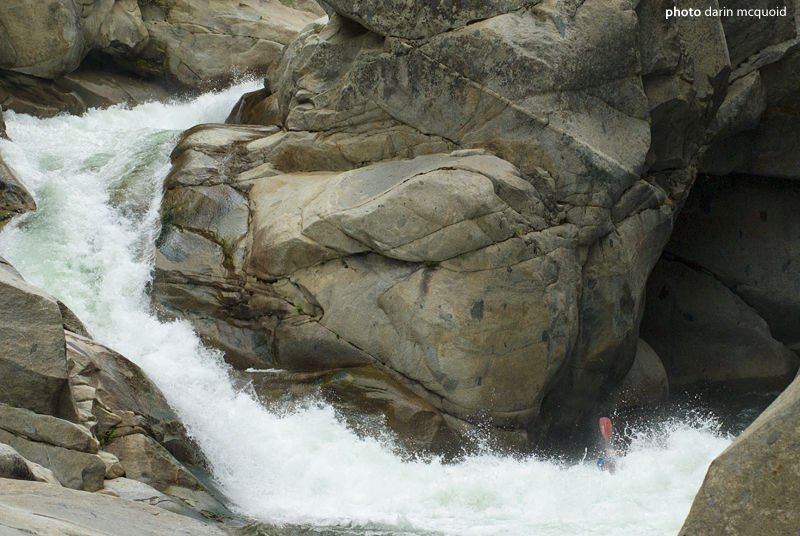 Ben Stookesberry runs the mean double drop exit of Rusty's Rampage. A picture says a thousand words, and the holes were not nice but no swims were had. 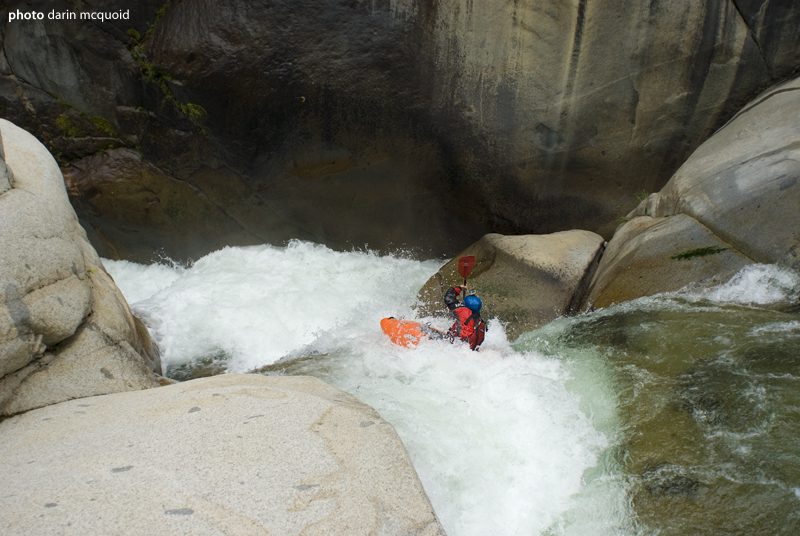 The river twisted to the right, and after a low angle slide one more horizon blocked exit from the gorge. An extensive scout didn't make us smile, it was a sieve filled, unfriendly finale to the Panther Creek Gorge. A left side sneak move involved a eight foot boof with a narrow landing, followed by what seemed to be a pothole on the right and crack on the left. The crack had most the flow going into it, and lining up a good boof down the center with left angle would be ideal.

Down in the rapid, Ben fired up his headcam and gave the thumbs up. I came down apparently online, but after boofing I found myself surfing the pothole, and Ben came in hot and managed to boof over me, getting some epic footage. I continued to surf in the pocket, knowing a swim would be dire as potholes don't tend to let swimmers go. Eventually I caught a surge and grabbed a crack in the right wall, and managed to pull and push myself downstream, glad to have gotten away with one.

Once out of the Panther Creek Gorge the walls opened up enough to give portage options, although none were needed as we continued into a pleasant surprise.


I think Ben was surprised as I was about this clean waterfall. 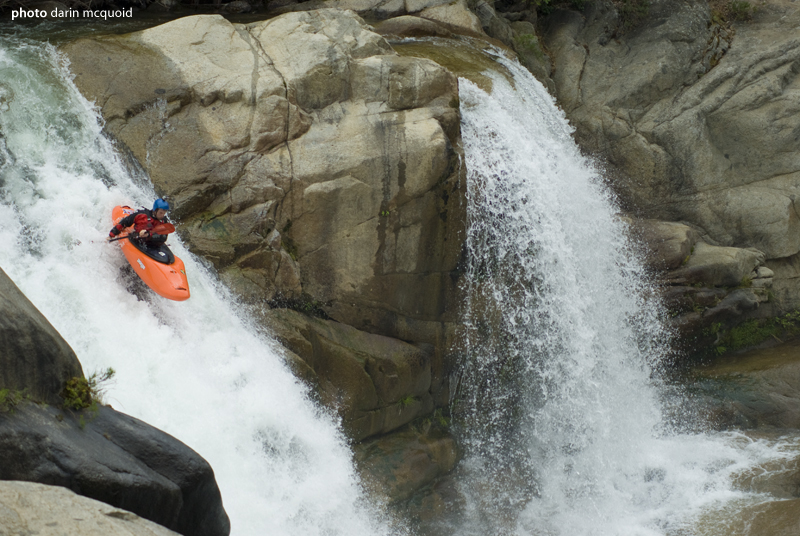 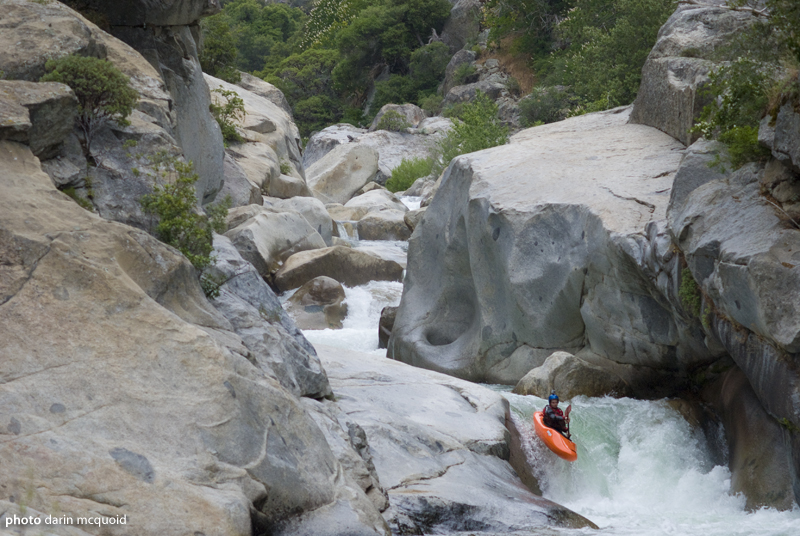 We pushed downstream noting we must be close to the road because there were two fisherman perched above another gorge. We made a quick portage around a dangerous entrance move before dropping into a nice rowdy triple set.


Below the triple set, the last rapid of the Upper Middle Kaweah is true representative of its character. 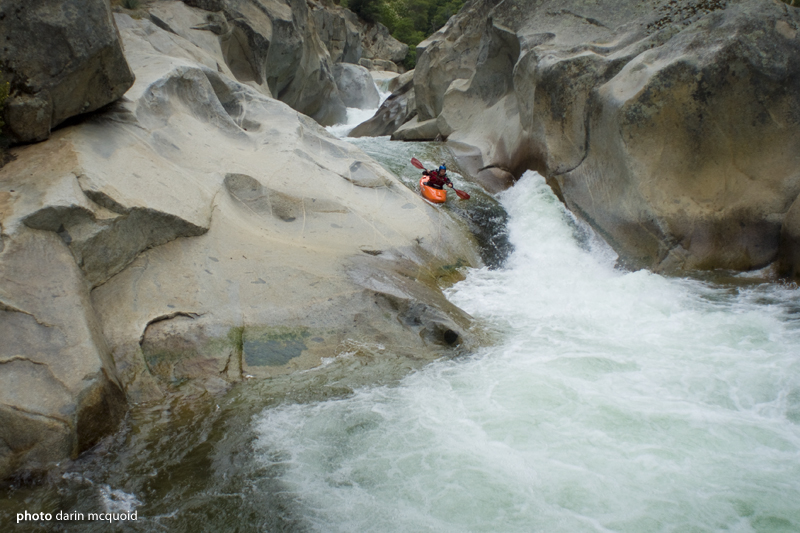 At this point there is a trail up to the trailhead, and this section is occasionally run in conjunction with Hospital Rock, although the quality is not on par with either section minus one or two better rapids.


One of the better rapids below the trailhead and above Buckeye Flat campground. 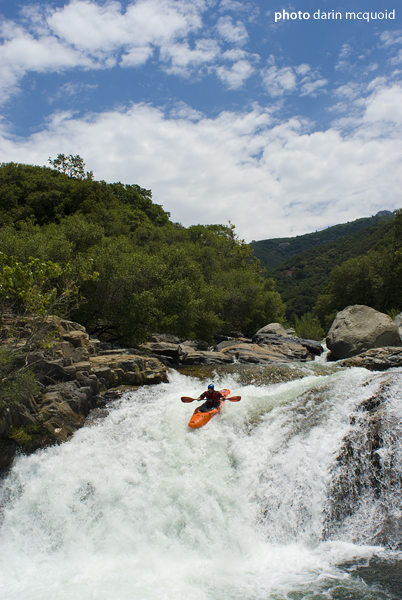 We had flows of 600-700 on the Middle Kaweah at Three Rivers, and thought it was perfect. Ben thought it would be possible to portage Rusty's Rampage, and while it would not require any technical rope work it would likely be as dangerous as the rapid. On the whole this run is destined to become a classic with the short hike in, locked in gorges and no mandatory portages. Arguably the hardest single day of kayaking in California, because you just can't walk very many of the rapids.