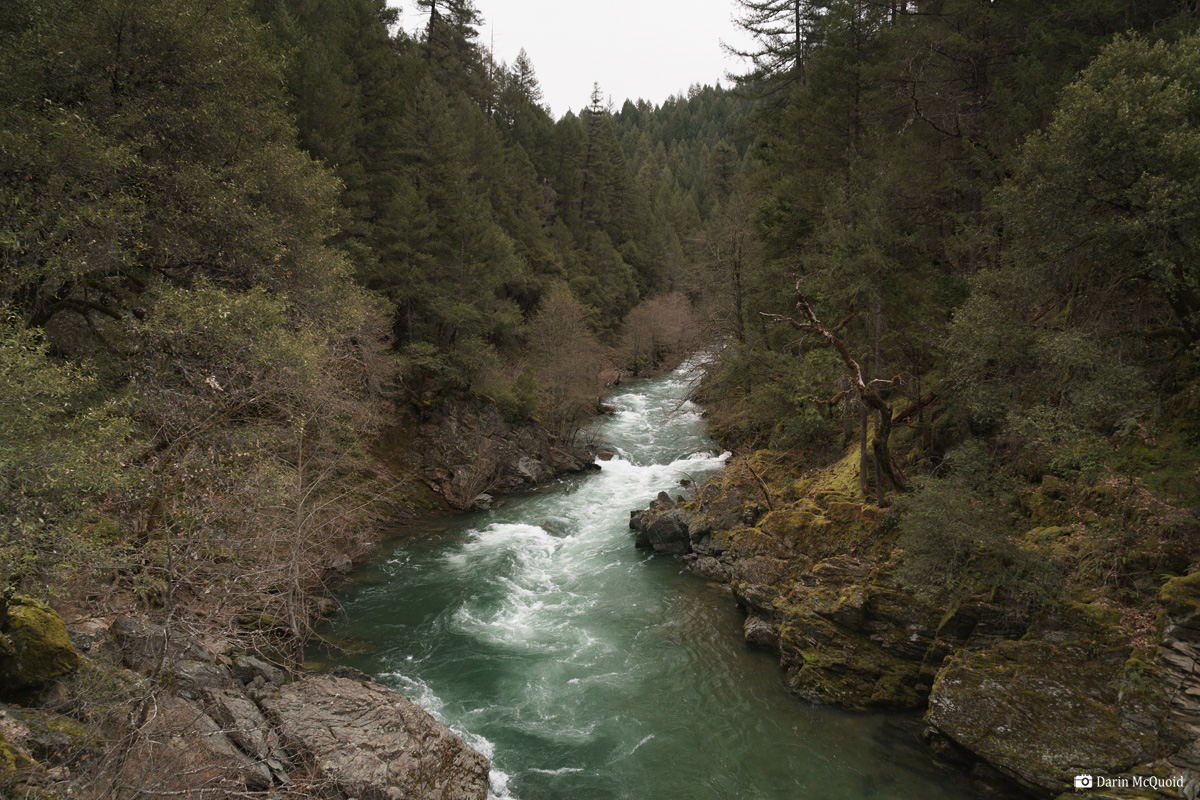 Wandering around in the woods in the month of May, 2018, I happened to end up at Forks of Butte. Not a lot of creeks have forks of the same name. If it's called Forks of Butte, there must be some forks to the creek? A quick look through the campground showed some beautiful swimming holes and a tributary coming in on river right; West Branch Butte Creek. 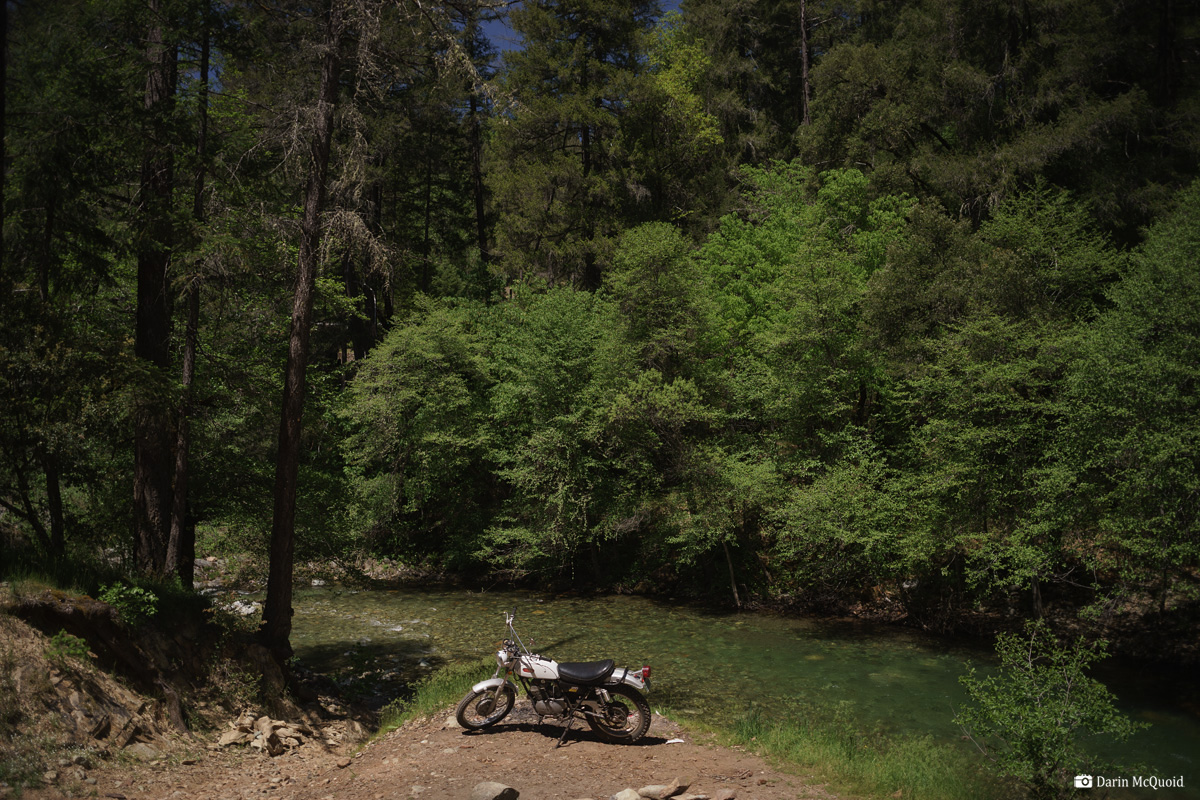 By this point in the year water levels were already a bit low, yet a scouting mission revealed put-in access with a little hiking on one of Sierra Pacific's gated roads off Highway 32. After some Google Earth scouting it went on the far back burner, until April 2019 when pretty much everything was too high after a huge snowpack and some rain on it. Discussing the options of what to do, Joseph Hatcher and Luke Andraka were game to join in some suffering; I promised them obscurity and mank, probably a lot of portages too. For some reason I told them it was around three miles. They agreed to the suffer mission.


Taking out at Forks of Butte Campground would add in over an hour of driving and take off a half mile of fast moving water on Butte Creek. No thanks, we opt to take out at the Doe Mill Road crossing of Butte Creek. 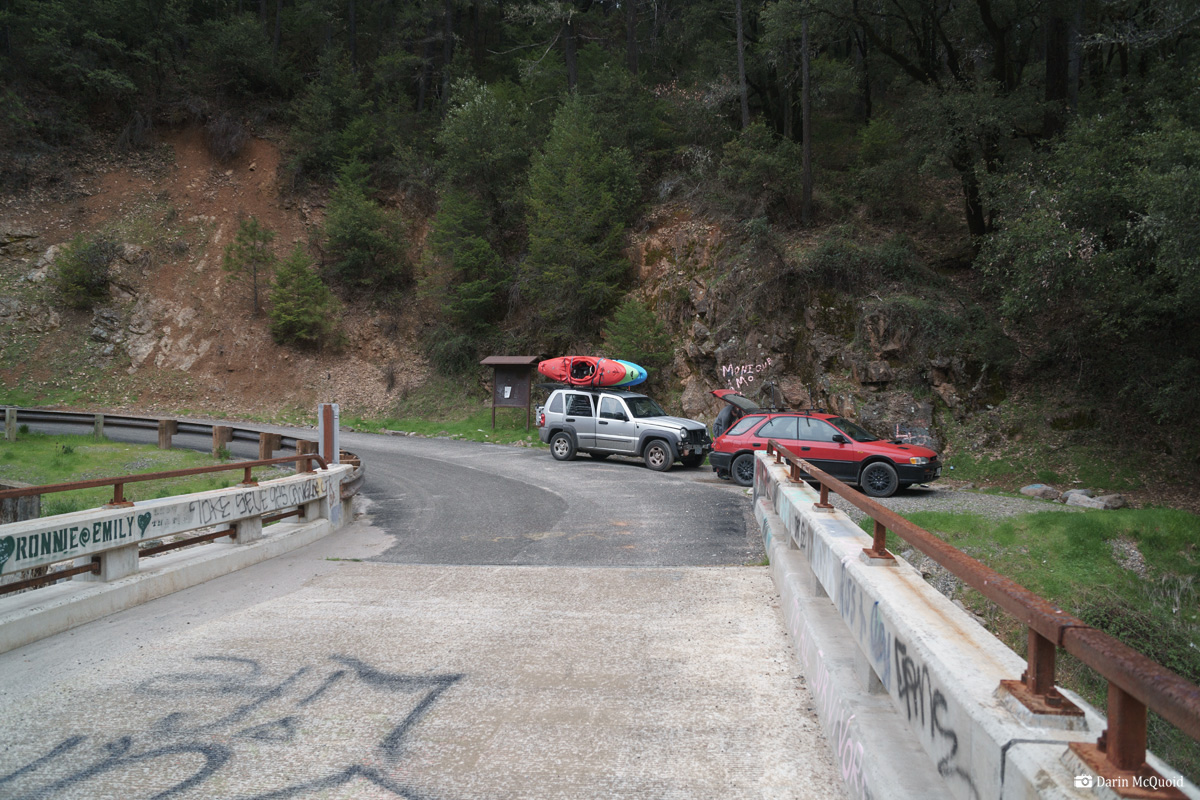 Shuttle doesn't take too long once we are on paved roads, and soon enough we walk around the ubiquitous Sierra Pacific Industries gate. 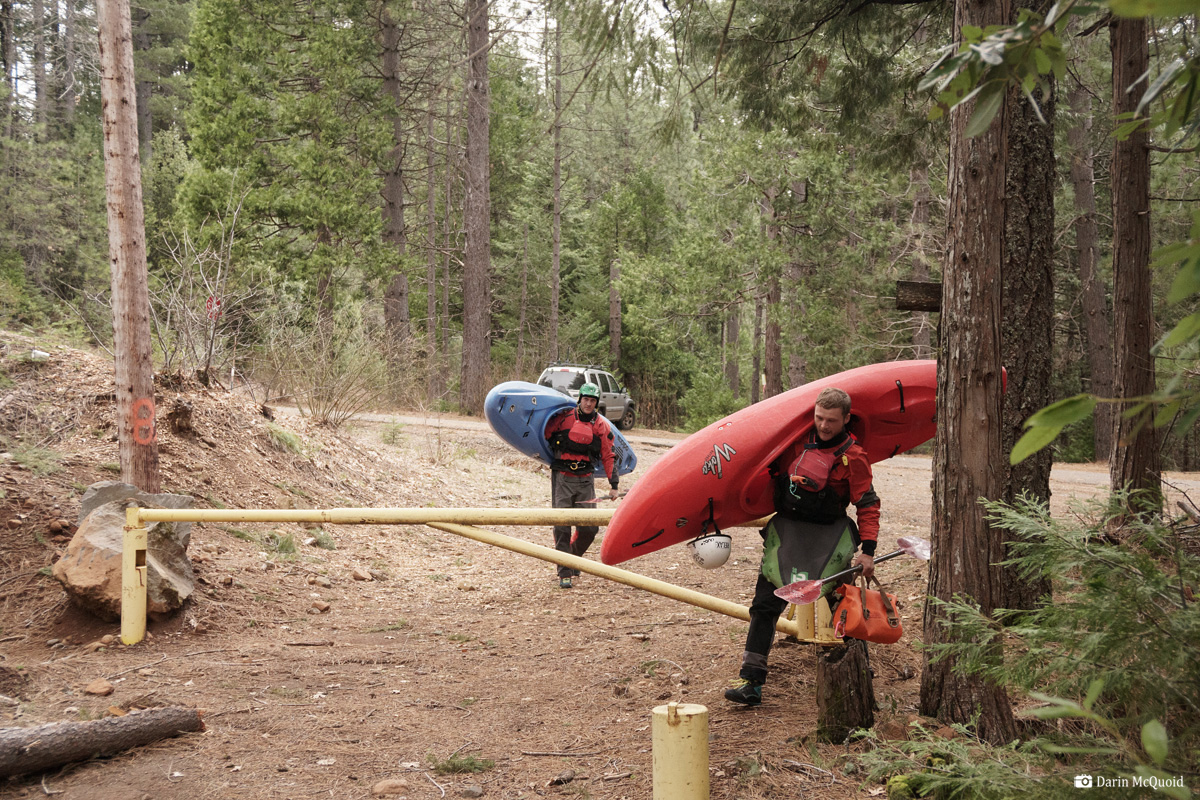 One mile on the road goes by quickly and soon at Nelson Ravine we scramble about a hundred feet down to the creek. It's a bit smaller than my optimistic memory said. Luke Andraka. 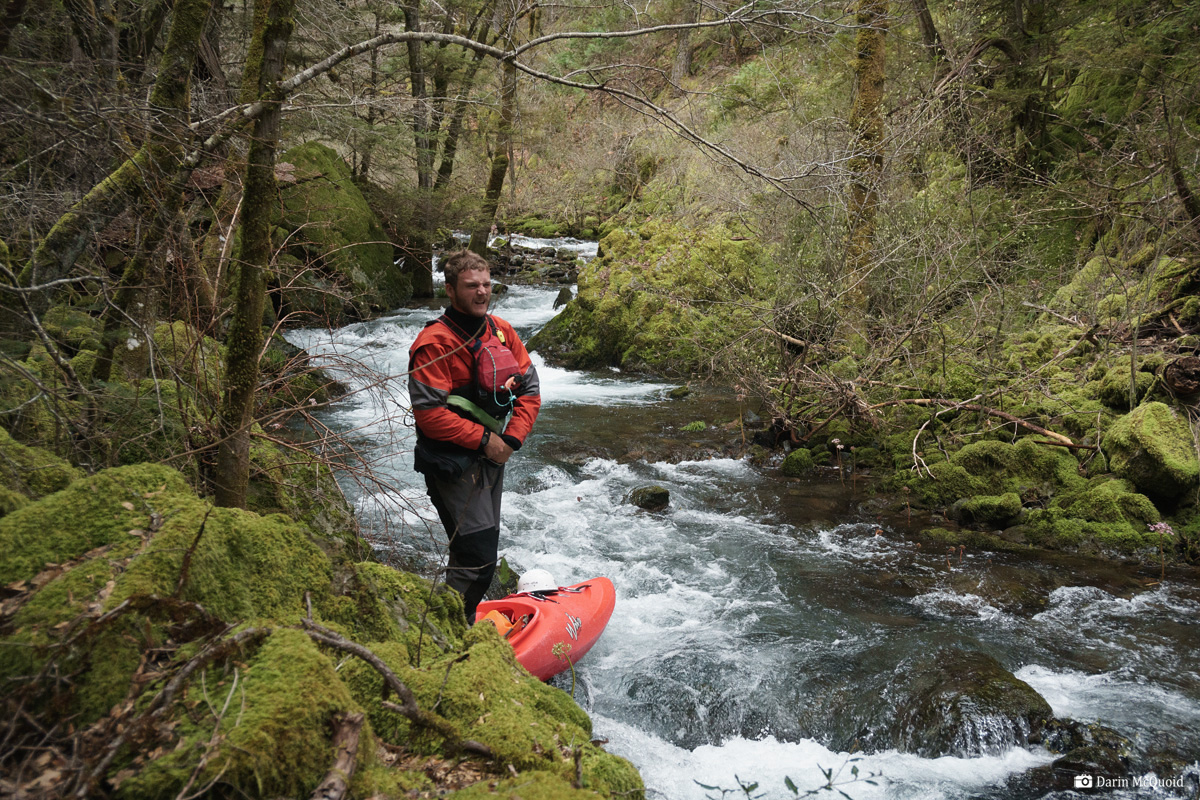 The first mile is flatter than the gradient would indicate. It's rather shocking to have no log portages as we cruise down easy gravel bars, then the gradient falls away. Looking back upstream at the character above our first scout. 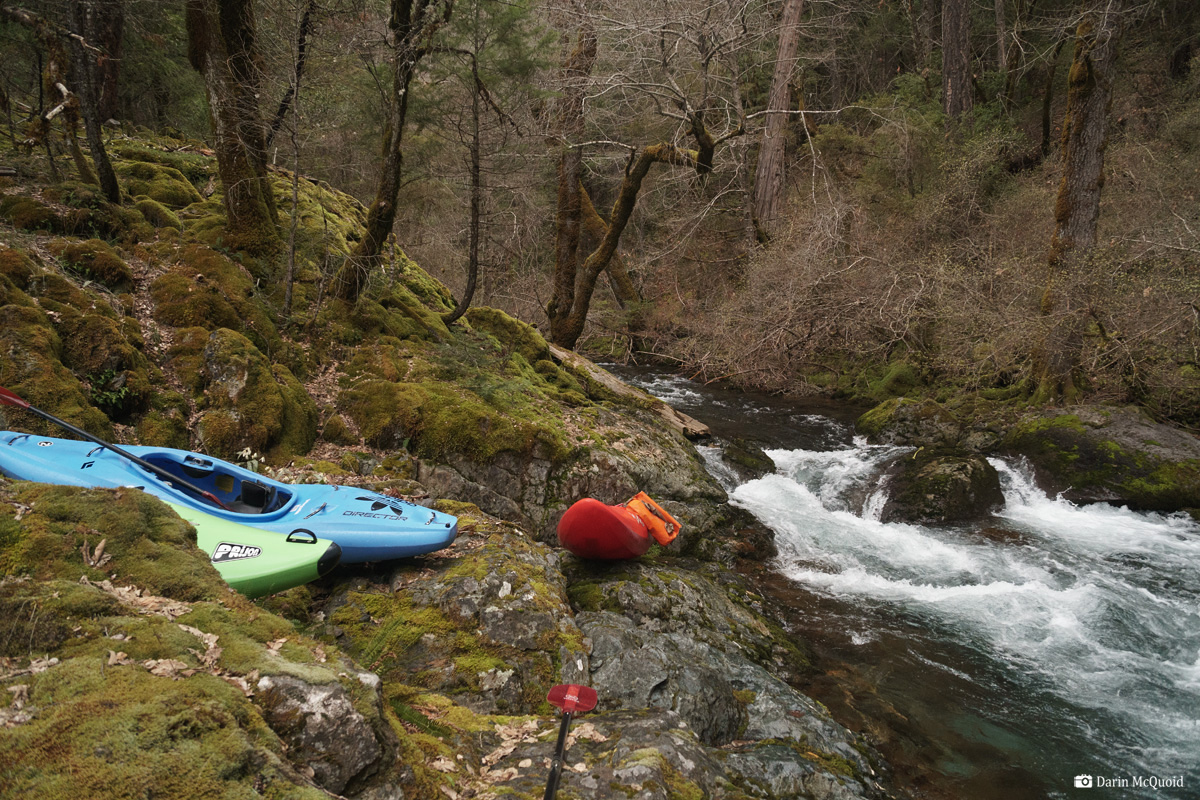 Whew can't say this looks too good, yet after a quick scout the Southeast background of Joseph and Luke is apparent, they are not even considering portaging! 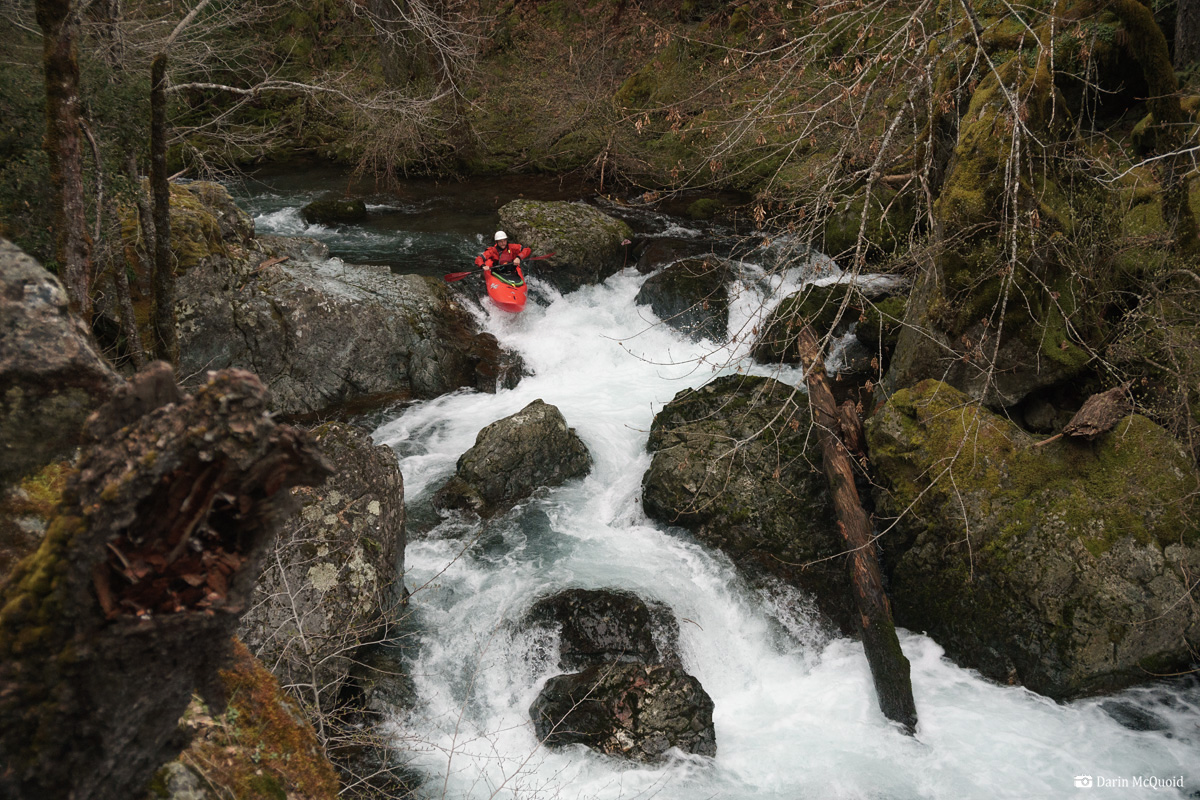 Joseph Hatcher in the same. 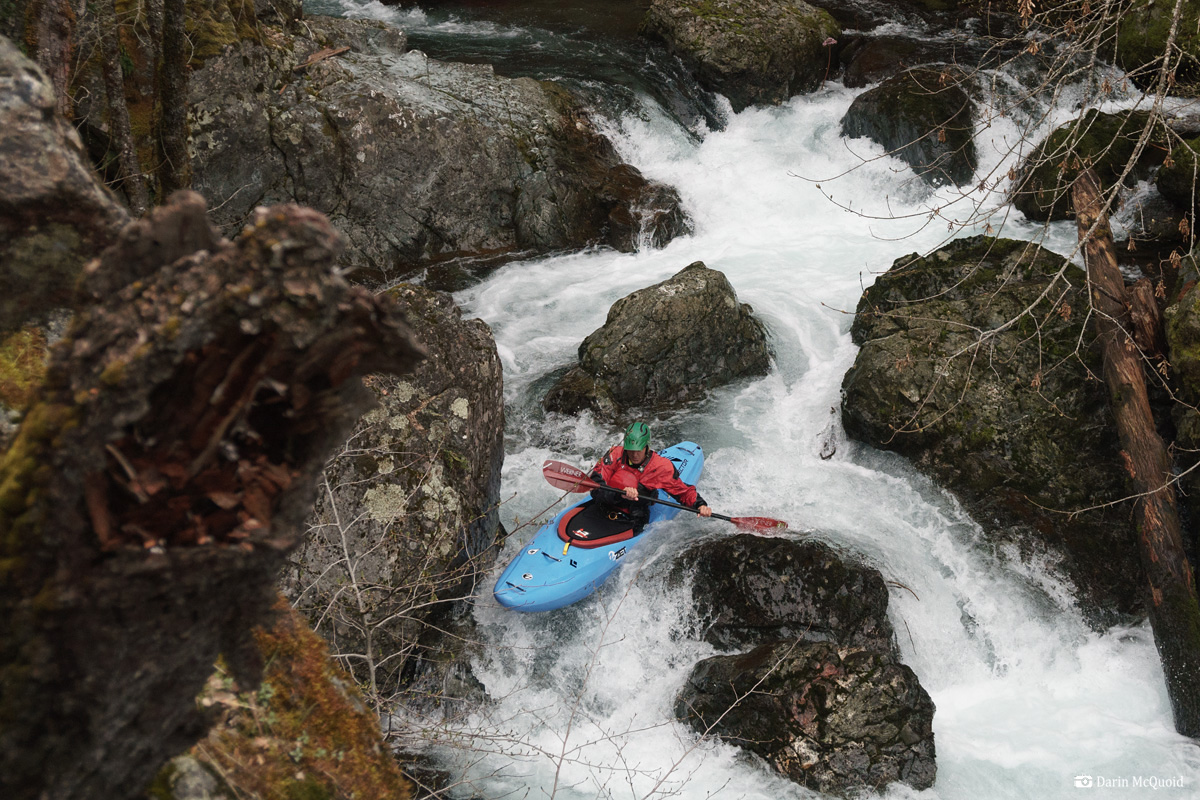 Luke Andraka enters the second half of the rapid, which is steeper than it looks, dropping another twenty feet or so total. 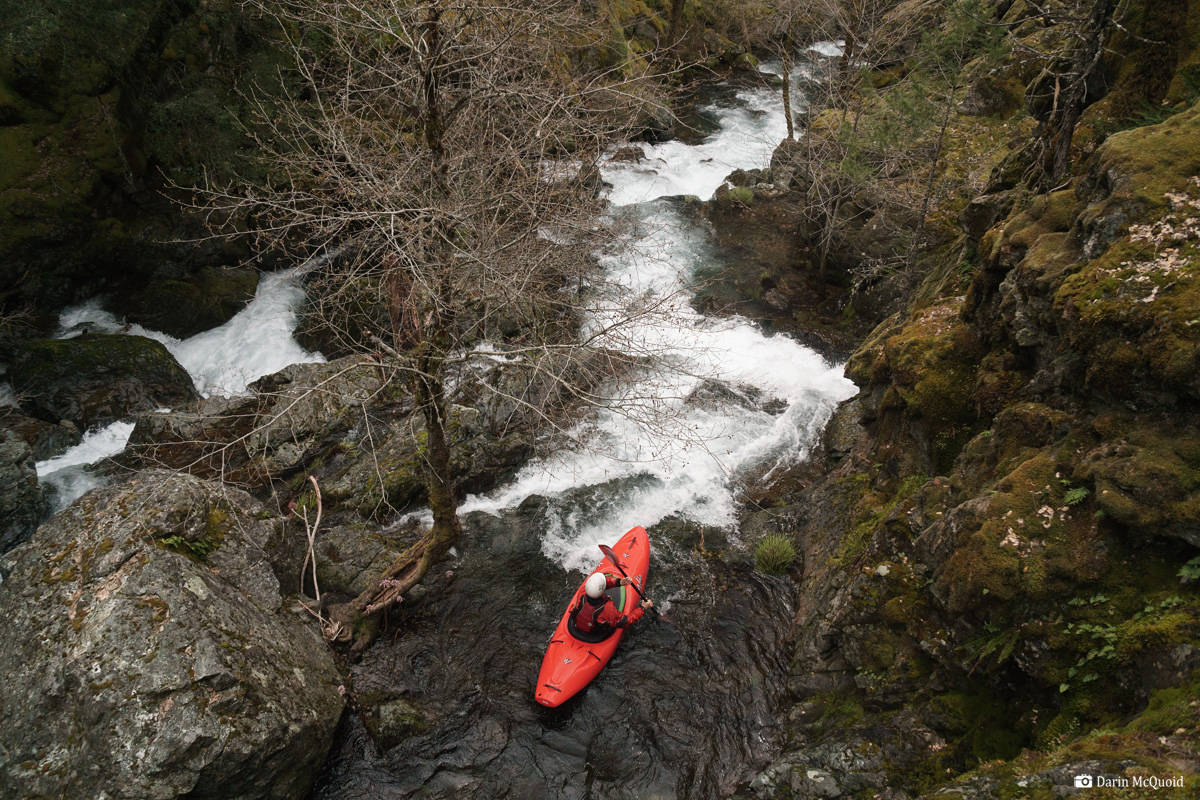 The gradient keeps going and we scamble to find eddies as the river falls away, steeper than anything we'd expected. A rather lengthy scout leads to a less than clean twenty to thirty foot falls. We all take the time to give it a good look and ponder what to do. Portaging looks to be a bit of a pain. Luke wants to run the whole sequence, while Joseph and I opt to portage the lead in and just run the falls.


A large tree at the lip creates a stunning setting that just doesn't get captured in a photograph. Joseph Hatcher scrambles down to join Luke Andraka scouting on the island. 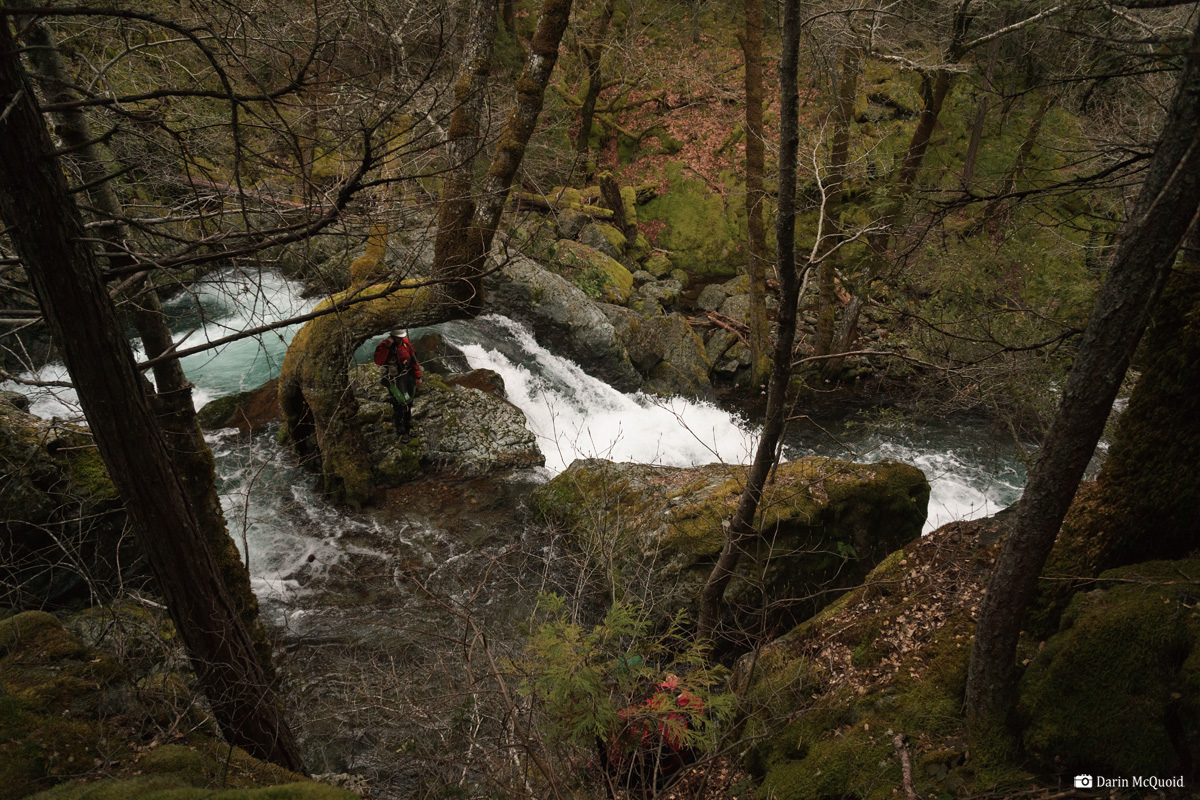 Luke Andraka enters the stack up. 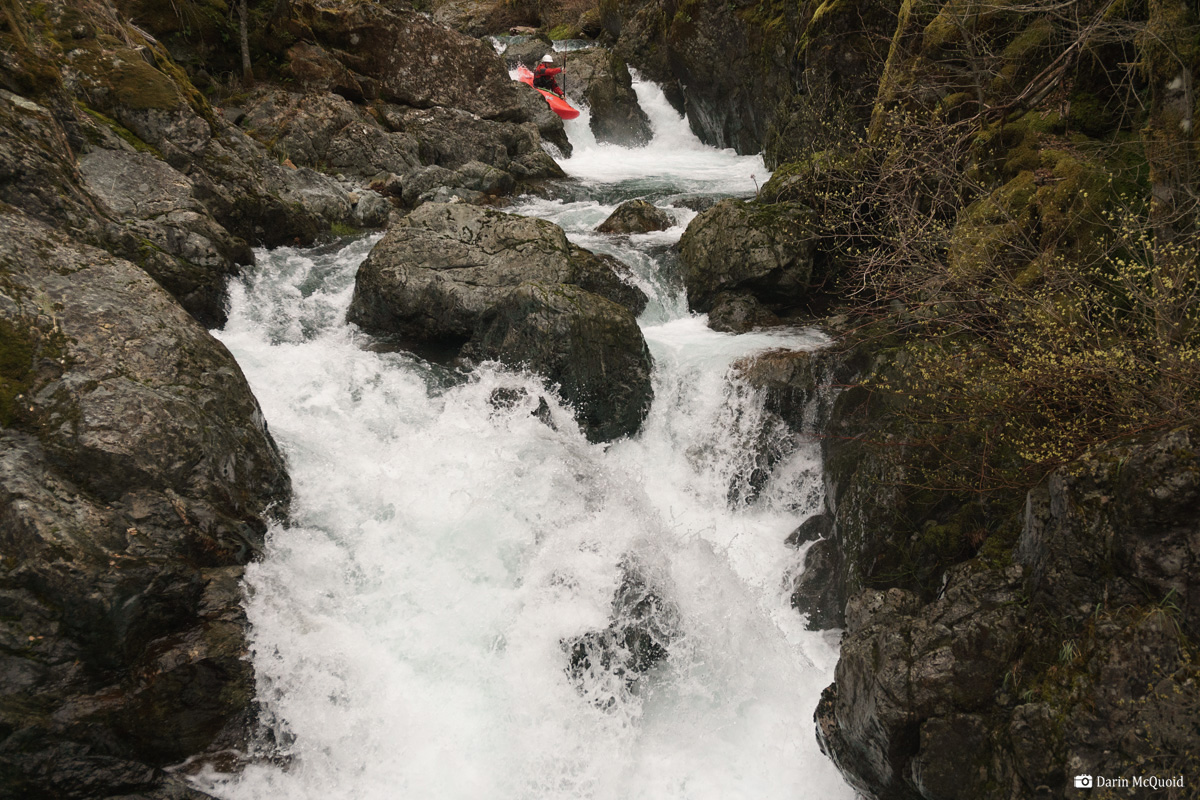 This little section has a narrow landing and Luke styles it. 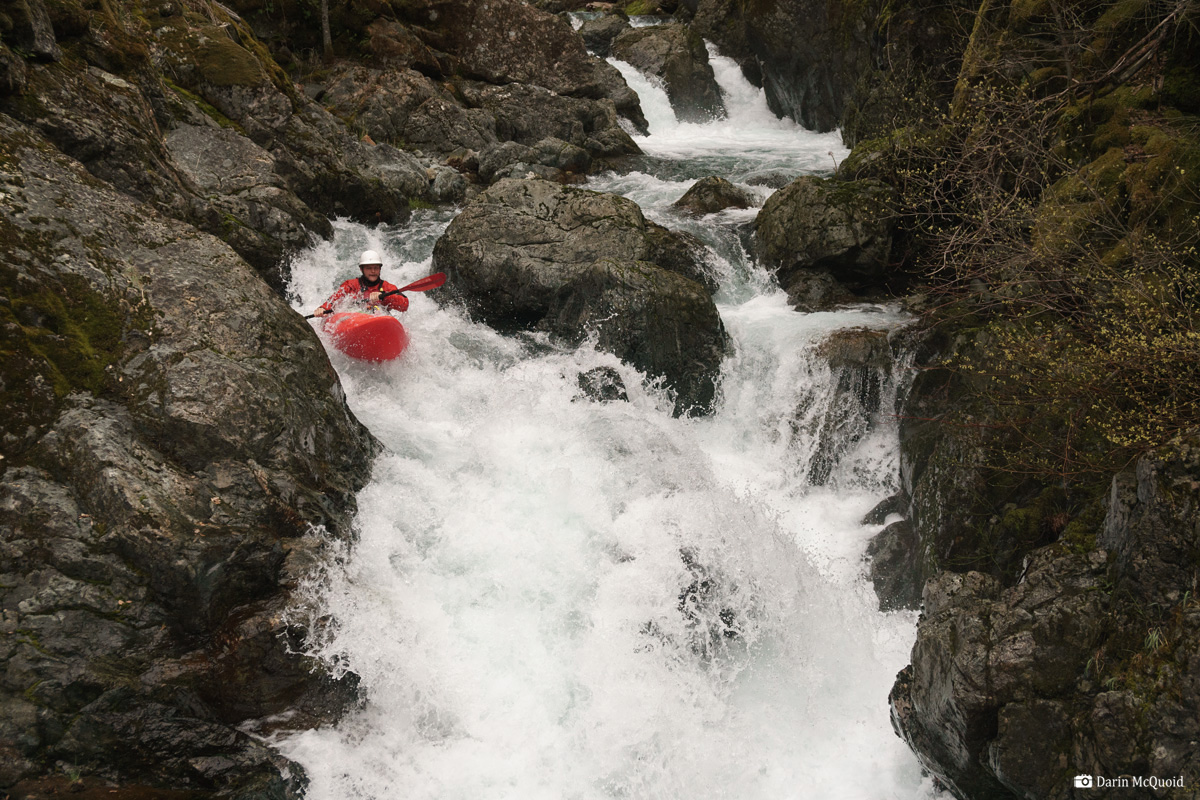 The lead in lands in a small pool before the main event, and Luke heads straight into it. 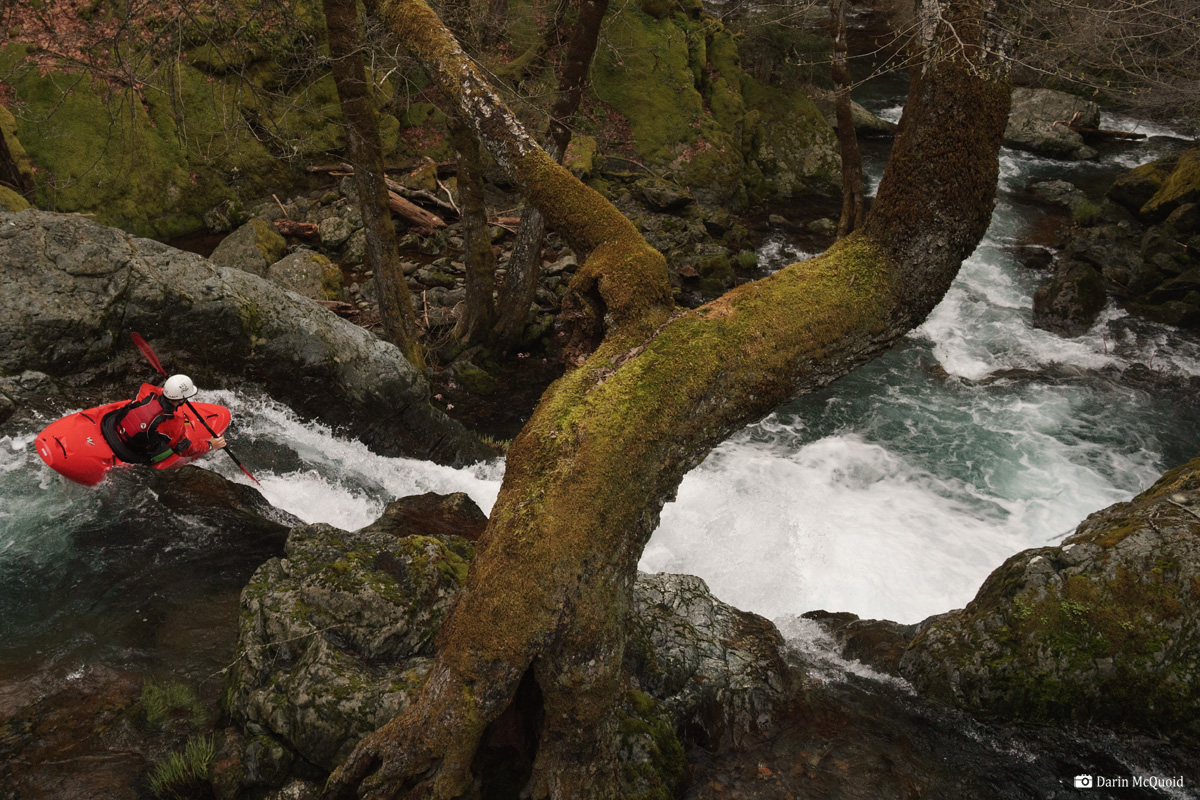 The place is a bit surreal for such a small creek. Seeing Luke's line go so well, I change my mind about my line and follow his. I know it's rarely a good choice to change lines, and despite Luke's great line, mine isn't and I take a big, full stop piton in the first half of the falls. The nose cone of my Prijon Pure cracks, absorbing the brunt of the impact. 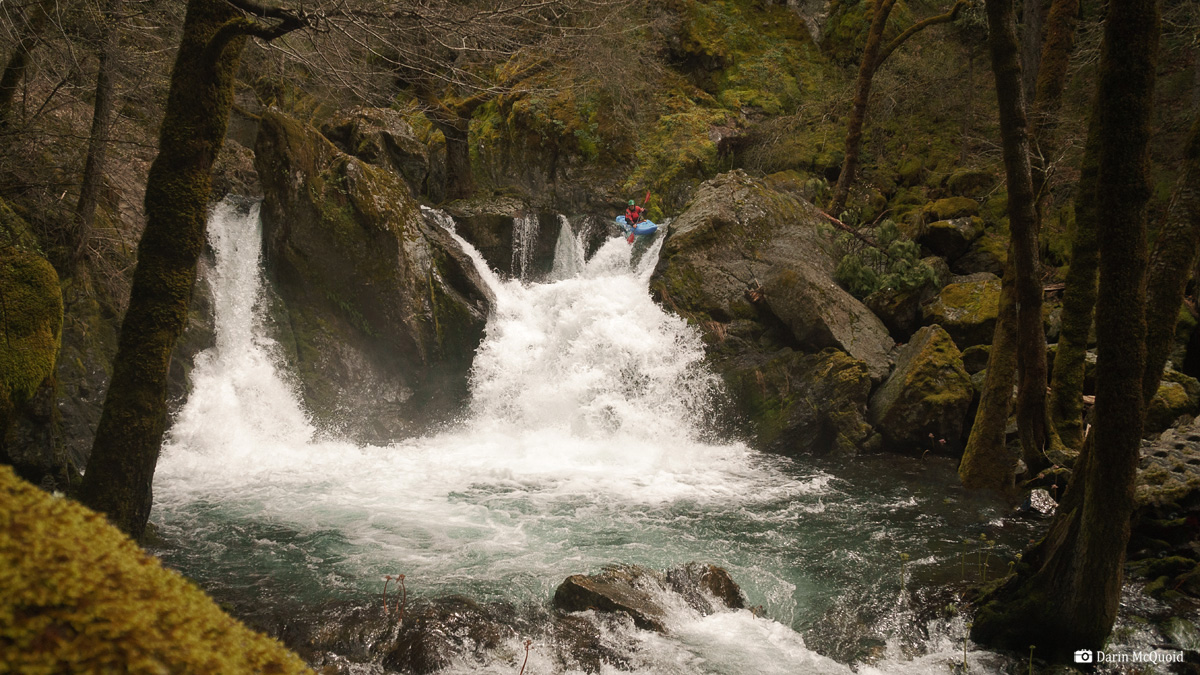 Joseph's line looked great, but Luke pointed out that his boat hadn't had such a great time on the waterfall. 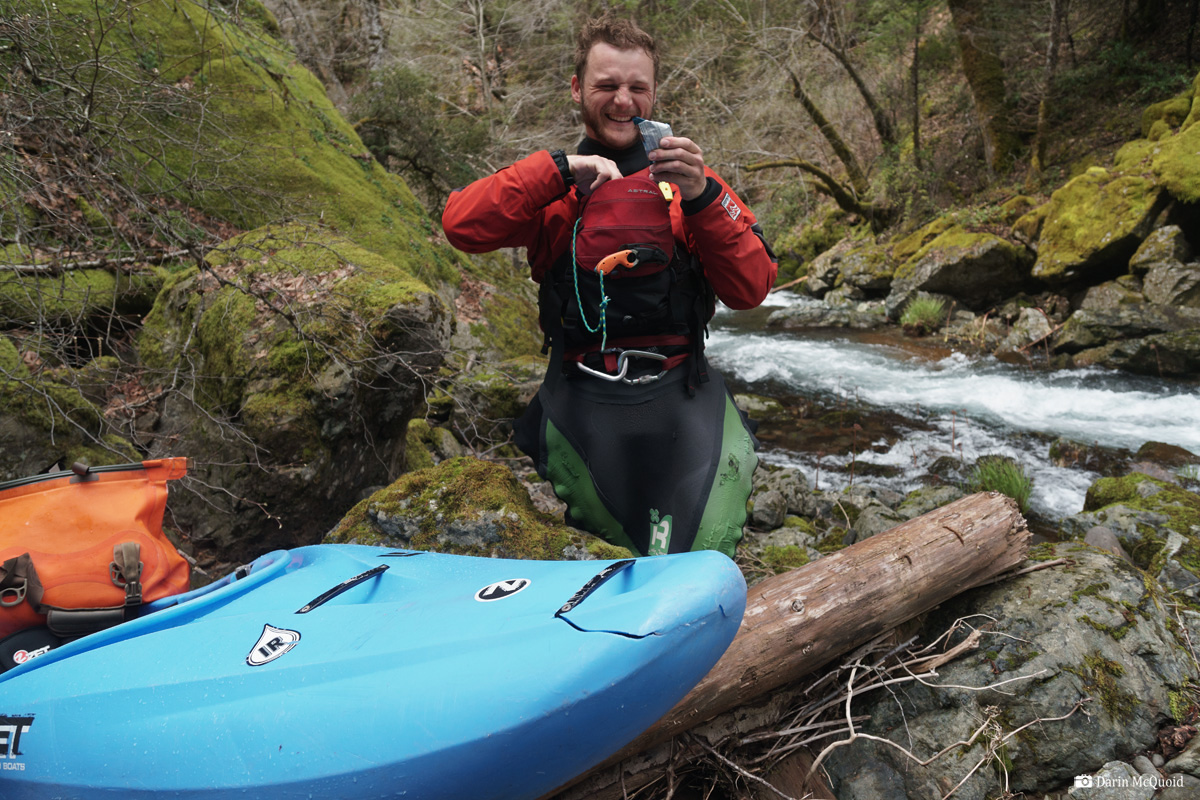 At least it's a nice setting to spend some time patching up a kayak. 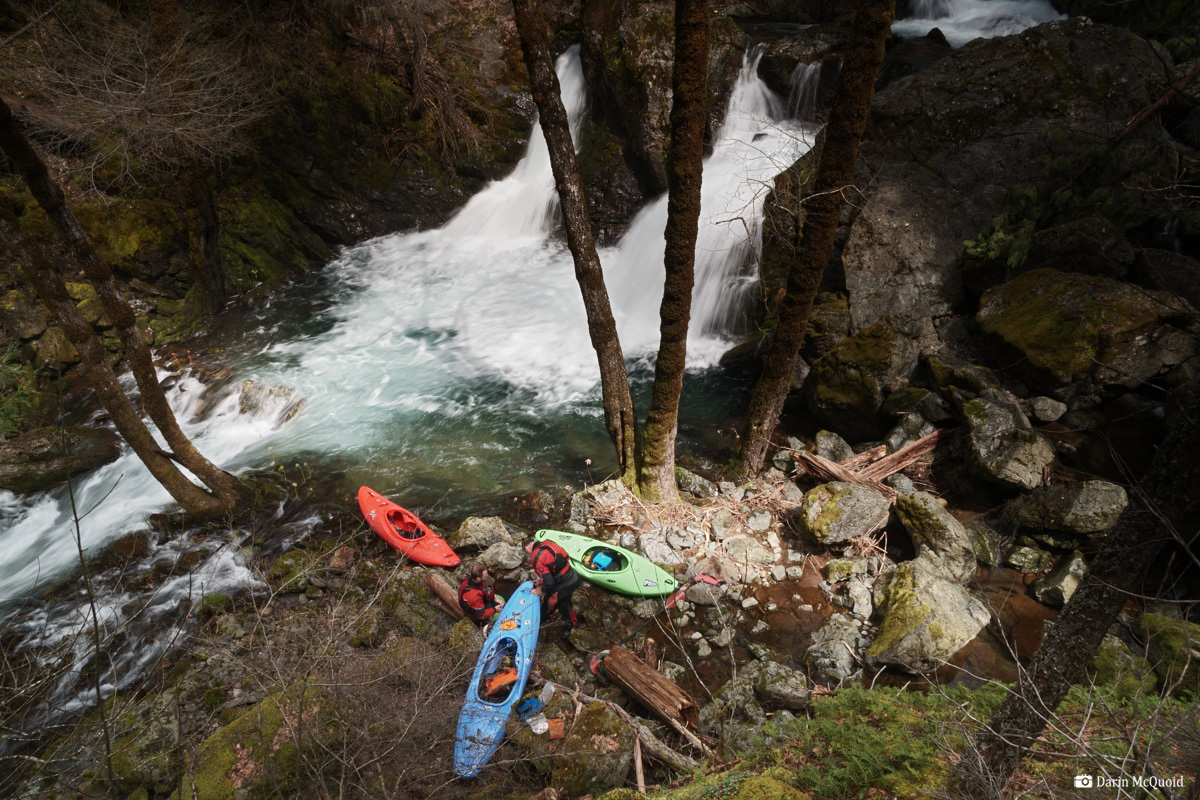 A couple drops downstream and Luke needs to get out for some boat repair as well. 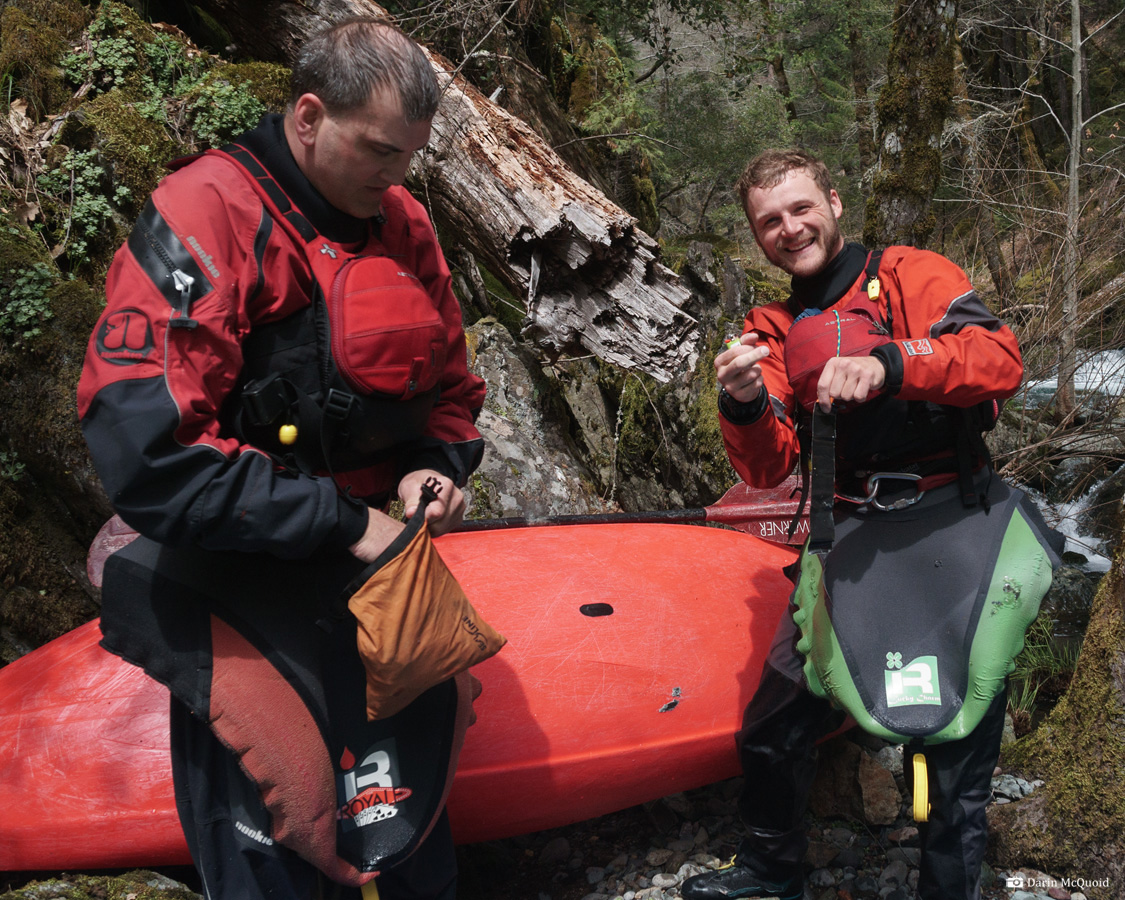 It's too cold to get much to stick, and too far to hike out. So we paddle downstream quickly, thankfully the gradient isn't steep and we have a total of around four log jams to drain Luke's kayak at. 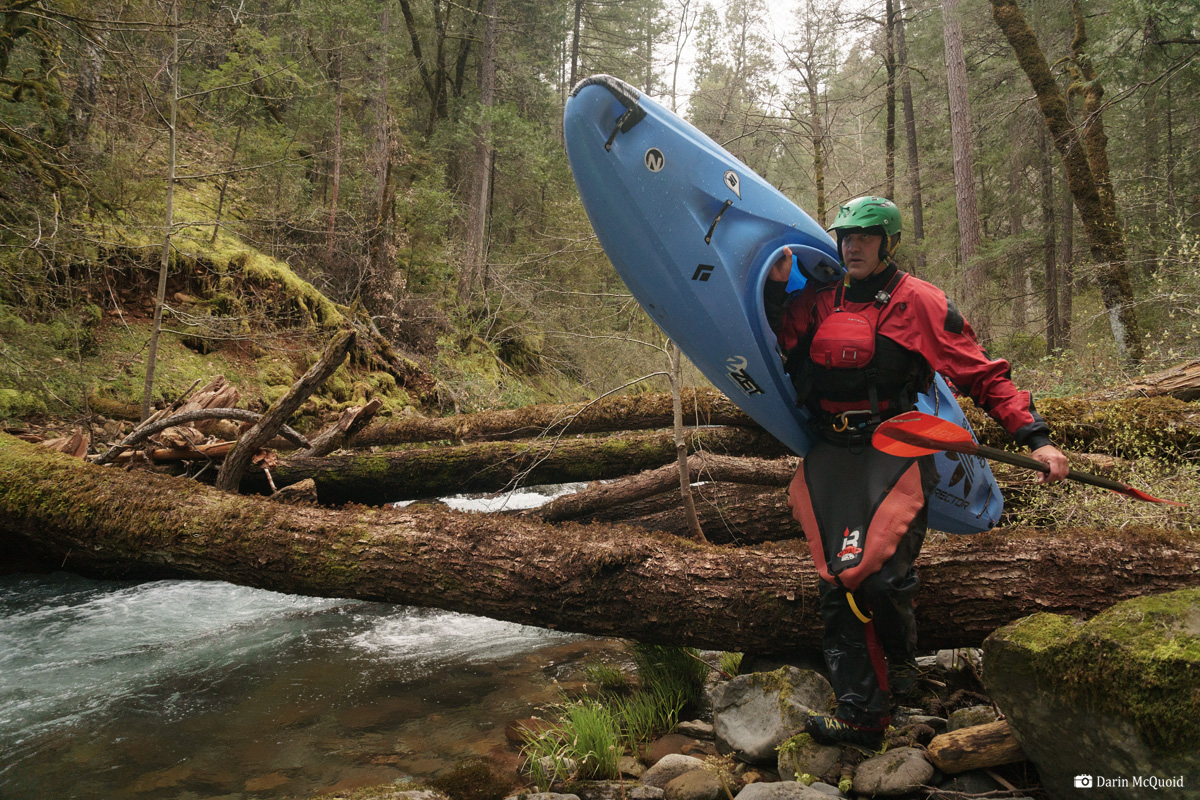 It's a relief to see the confluence with Butte Creek. 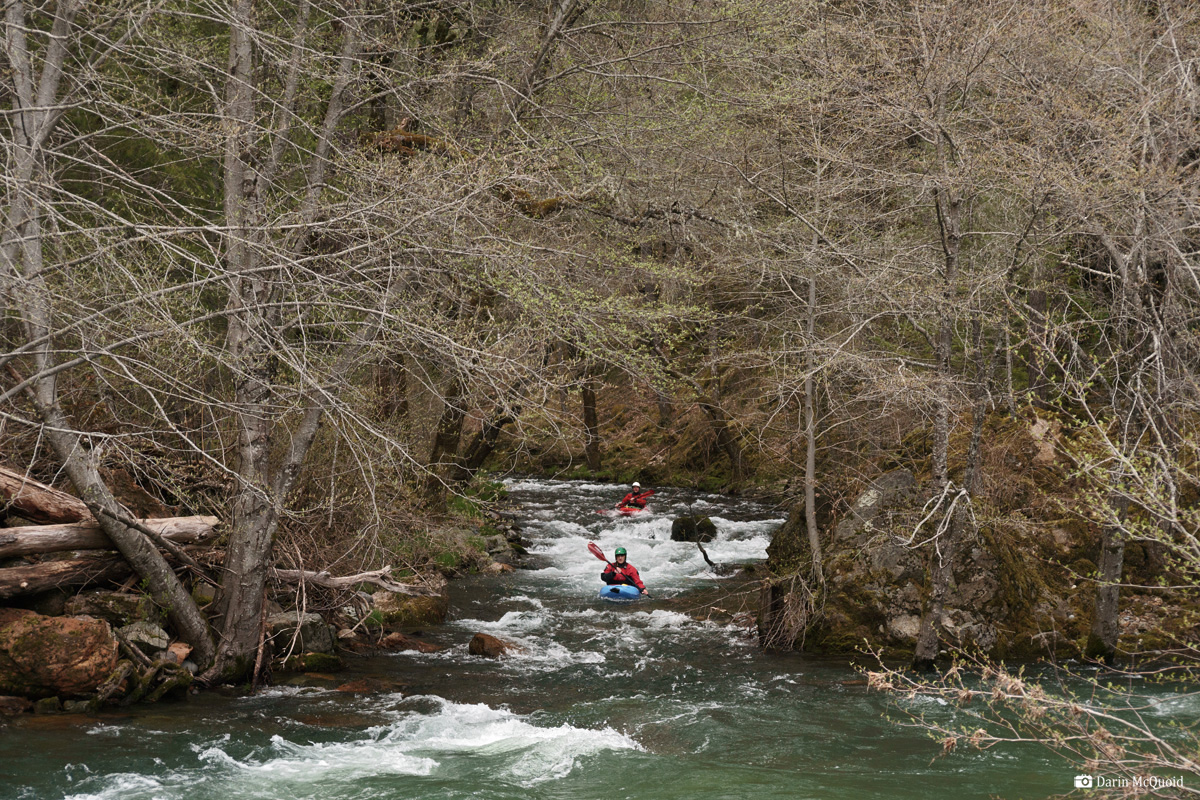 Now we're into some good volume and it's just a few minutes to our take out at Doe Mill Road.

Two broken kayaks didn't leave a great taste in the mouth, yet it was an entertaining day. Nothing we'll be in a rush to get back on, but a beautiful place when other rivers are too high to run. We caught West Butte Creek with the Butte Creek gauge dropping down from 1,800. 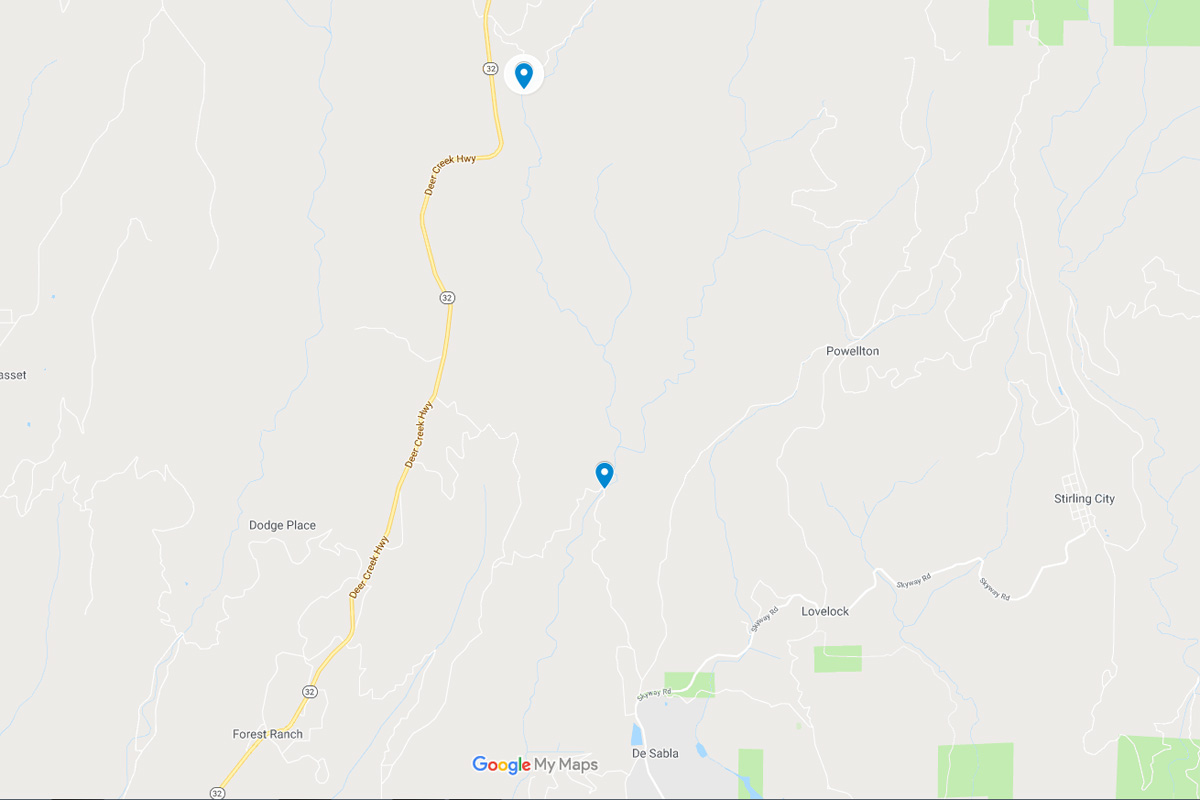