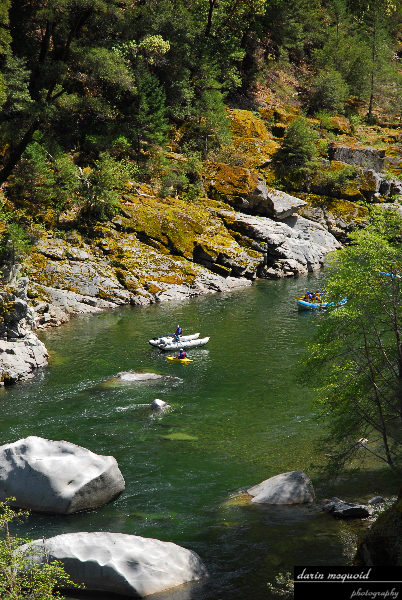 There are two runs on the Cal-Salmon, although the two can easily be combined into one day by kayakers. Playspots abound and the big water character lends itself to playboating the runs. The standard warm-up run is from Butler Creek to Brannon’s Bar. This run is III-IV with one of the largest mandatory rapids on the run, “Gaping Maw” aka “Marble”. It’s a pretty straightforward rapid that requires the paddler to work their way down the right side through some large waves and laterals. The left side contains several large holes. Here is Scott Yoder running down the right of Gaping Maw with flows around 4,000cfs. 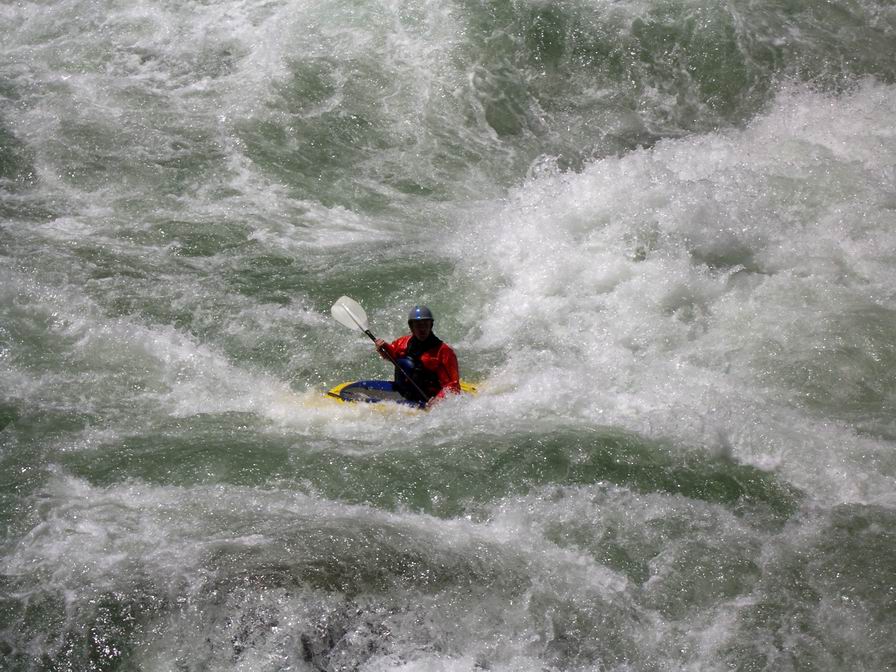 I was young and foolhardy, and decided to see how sticky the left side of Gaping Maw was.

Nordheimer is the true classic run of the Cal-Salmon, as has a general big water class IV character with two larger rapids sprinkled in. The winter of ’06 made some major changes to some of the most significant rapids on the Salmon. Cascade, a large V- rapid consisting of many different routes, has several new barely submerged rocks in the left channel, making it dangerous for an upside down kayaker. Cascade offers up a wide variety of routes. 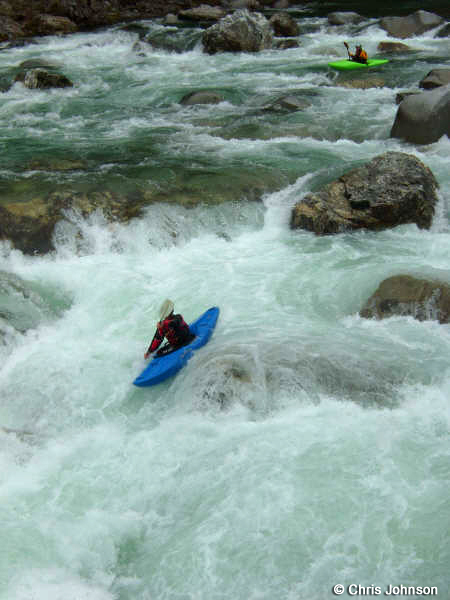 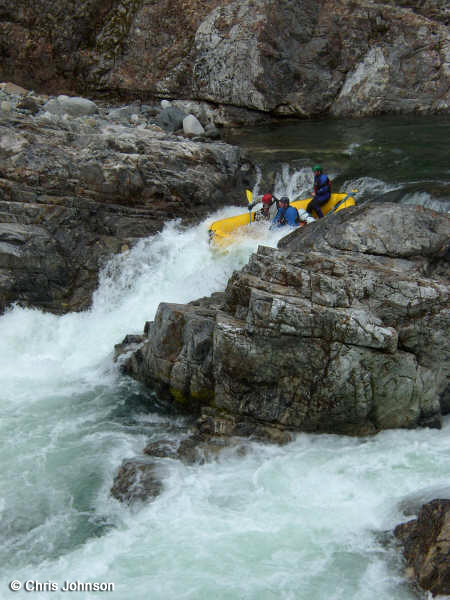 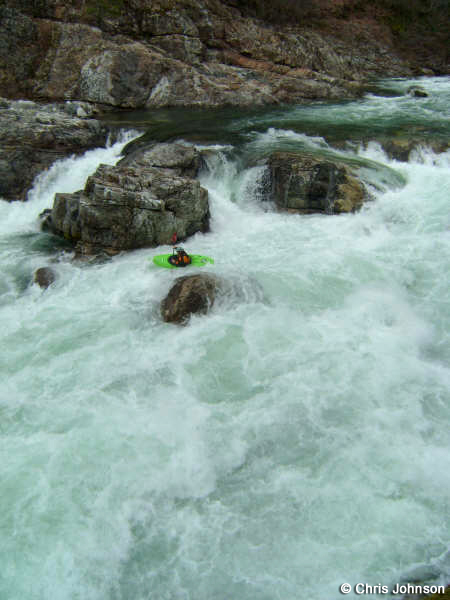 Last Chance and Freight Train were quite a notorious combination in past years. Last Chance is a big class IV that is right above class V Freight Train, and used to contain a hole that gave some long hole rides to rafts and kayaks. Reported hole rides have been over two minutes before people finally giving in to a swim. In the last few years the hole Last Chance has mellowed out and it isn’t nearly as sticky these days. That said, it’s still a large rapid and the hole can flip rafts. Last Chance is an aptly named rapid, because it is separated by either a wave train or short pool from Freight Train. A raft at the top of Last Chance 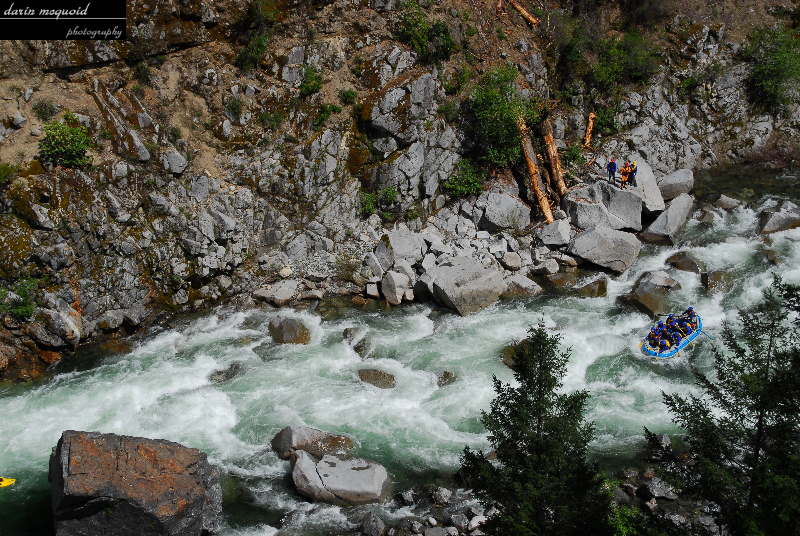 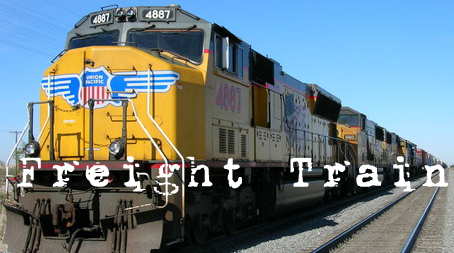 This rapid’s name is also very fitting, Freight Train a big, powerful, lengthy rapid, and at higher flows it sounds like a Freight Train is roaring by while scouting. This picture is from a few years ago, here I am rolling back up in Freight Train with flows around 1,800cfs. 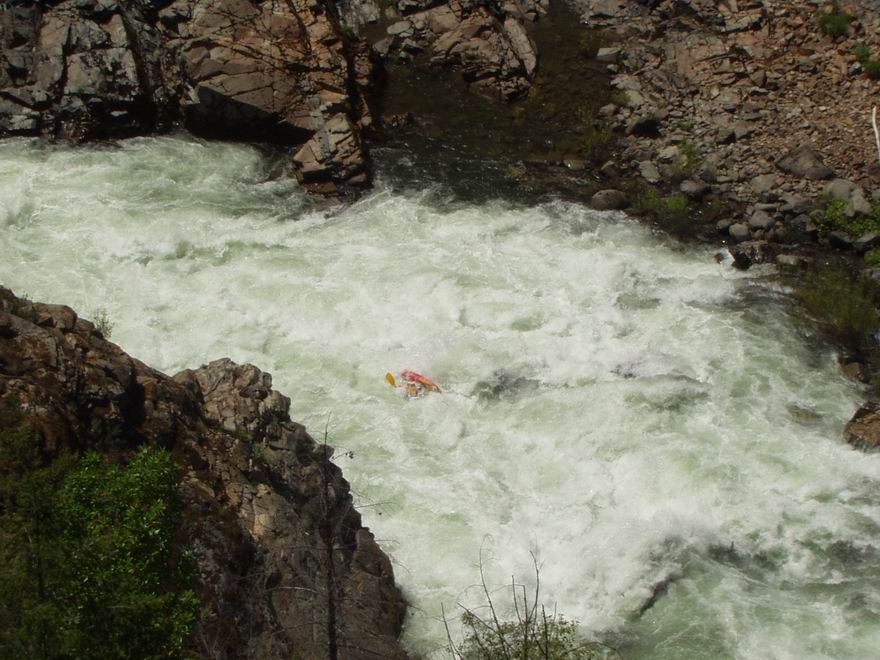 The move used to be a strong left to right move through the gigantic lateral hole, where you would melt through and resurface in the middle of the river. Since the rapid has changed, the ideal line for a kayak is still up for debate. While the hole on the left is still large and a little sticky, it’s also free from rocks. Currently if you punch through the lateral with momentum you end up going over the rock pile on the right, and if you let the lateral take you, there is a barely submerged rock where it takes you. Ok if you are upright, but it has already caused some injuries to upside down kayakers. Rafts still run the left to right move, tending to hug the large horn rock and hit the lateral with more of a downriver angle. Here rafters style the line on the not as friendly any more Freight Train, with flows around 2,300 cfs. Note how many more rocks there are currently at 2,300 than previously at 1,800.


Rafters getting setup 1/3 of the way down Freight Train. 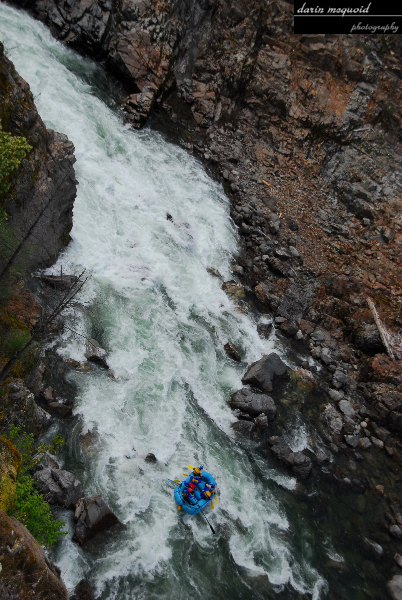 A raft makes the crux move in Freight Train. 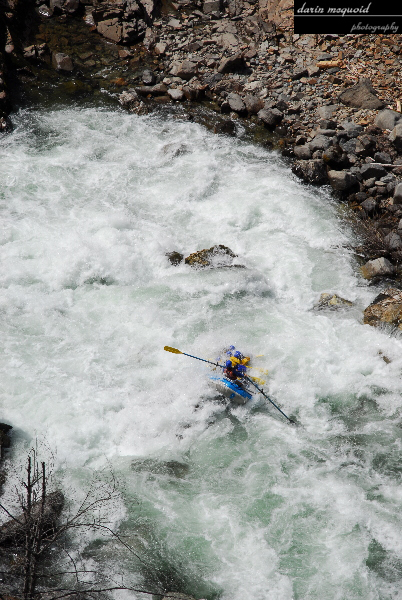 Nate buried in Freight Train, shot from below. 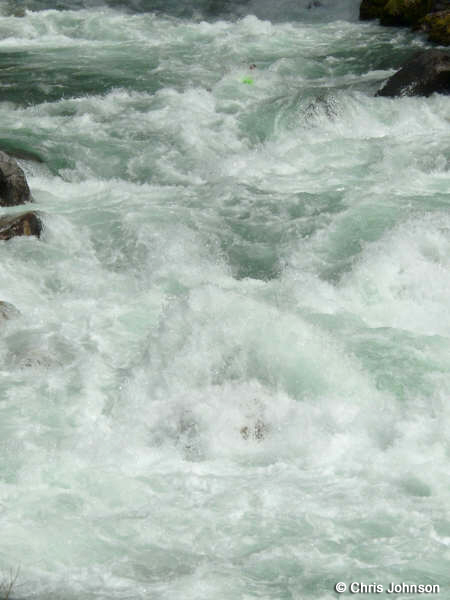 Over 4,000cfs Freight Train cleans up a lot, just make sure you have a rock solid roll for the high flows, in the ‘80s a commercial rafter flushed into Freight Train after falling out in Last Chance and tragically drowned. It’s a lot longer than it looks like in the photographs, and has a habit of flipping rafts on the bottom wall too, but there is a nice recovery pool below at this point. There is also an easy portage for both Freight Train and Cascade down the right banks, for those wishing to get all the class IV action and avoid the V. Epic whitewater, great scenery, what else could you want?

How about free camping? With BLM and National Forest compose the majority of land ownership in the Salmon River watershed, and good free camping is everywhere. It’s so easy to find I don’t even need to give out directions to it. 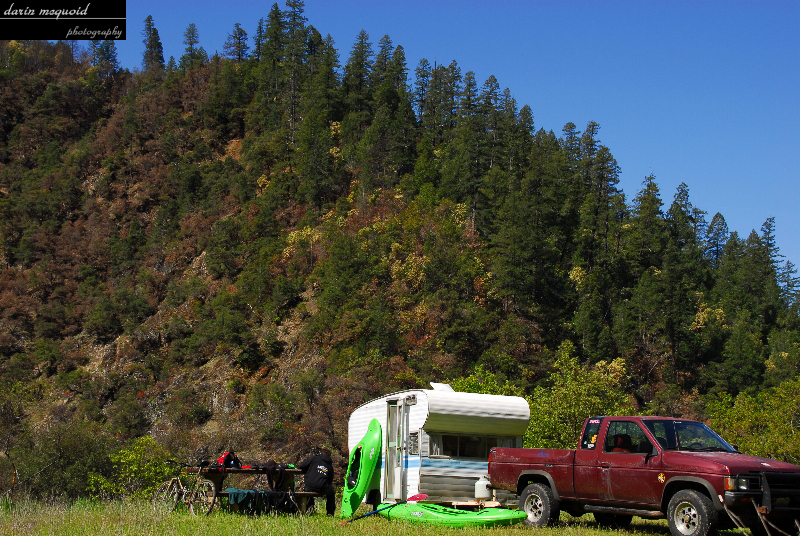 Oregon Kayaking and California Creeks also have great write-ups on the Salmon. I agree with Oregon Kayaking on ideal flows of 2,000-4,000, although once you know the run it's great up to 5,000 but very pushy in a few spots. Bring your creek boat too, because there is a lot of other stuff to run in this area. Look out for poison oak, it's quite lush in the Salmon watershed.

The Gauge near Somes Bar. 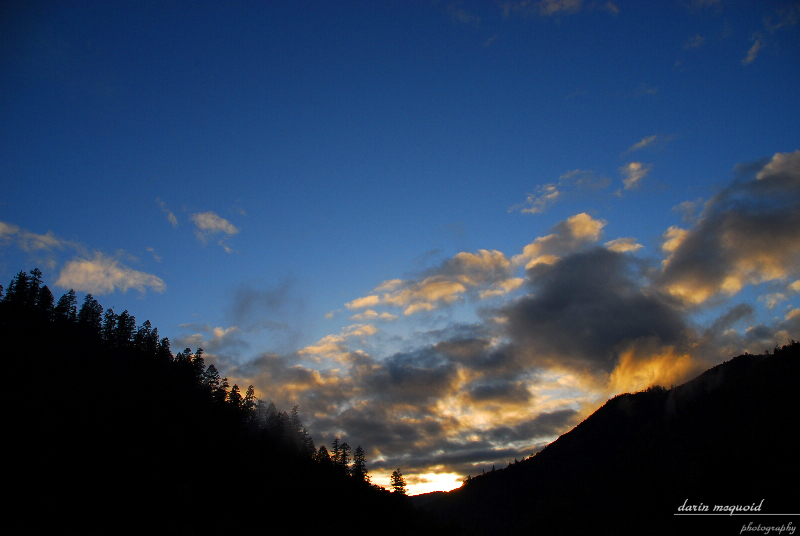