The North Fork of the Middle Fork American River is disturbingly similar to the Giant Gap of the North Fork American. The hike in drops a similar elevation, and it has a long tedious paddle out at the end. I suppose that's where the similarities really end. Kayakers rarely get on the North Fork Middle Fork American because of access issues. In many years when the run has adequate flow the road is snowed in, and by the time the snow clears out, so does the water in the river. On our trip the run had been a bit high the previous week, and there were still patches of snow on the road. We had no snow on the road, but flows were certainly on the lower end of the spectrum.

The run obviously begins with some hiking, roughly three miles down a steep trail to the river. Like Giant Gap, you can drag your boat, but the trail is harder on the boat (more rocks) but easier to drag on/in because it's often somewhat of a ditch.  As on the Giant Gap trail it's important to keep a wary lookout for poison oak, it's out there to get you.


Views of clear skys and clearer water from the take-out bridge. 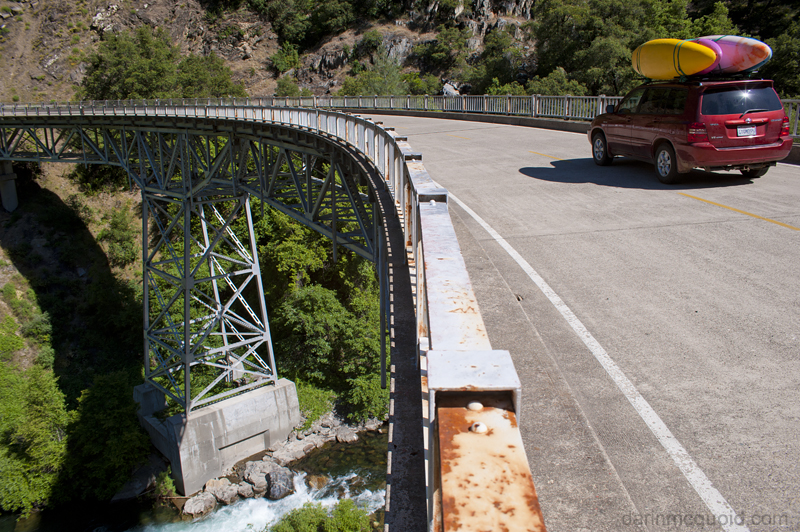 Oddly enough, motorcycles seem to be ok on this section of the Western States Trail. Daniel Brasuell heads down. 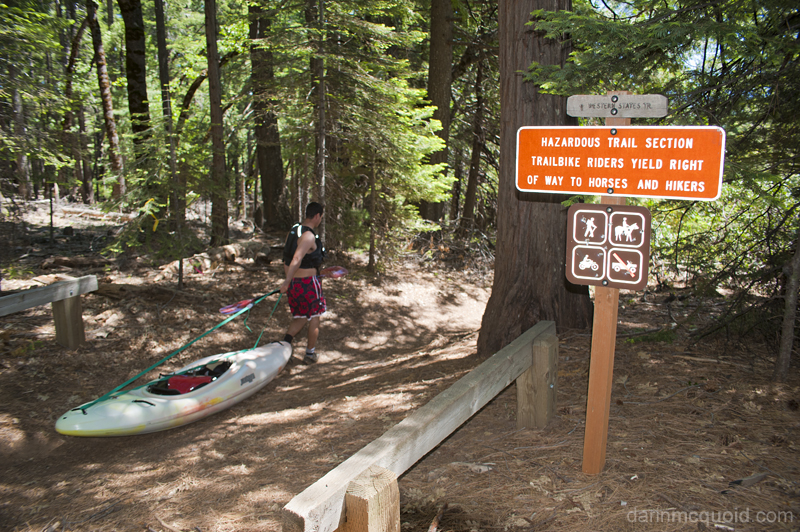 Again much like Giant Gap, a bridge at put-in and crystal clear water. Diane Gaydos soaks it in. 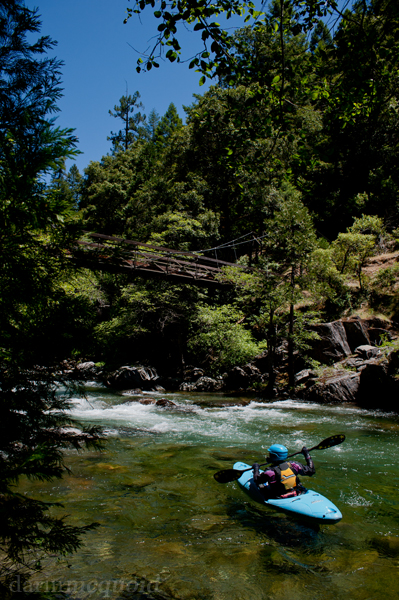 The first rapid downstream proved to be a bit junky as most the crew had contact with the right wall. Oh uh, maybe it was too low? The next rapid proved to be a bit of a hit too. If it wasn't so damn far back up the hill we'd be considering hiking out. As it is, downstream progress is the only option we want to deal with. Let's hope things improve.

Things do improve. The boulder gardens get cleaner and we are having a good time, making only one quick portage on the left around a junky rapid. Then we eddy on the right above a big drop. Ah yes, our beta master Daniel remembers this is the one you don't want to go too far down the right on. He's eddied out higher on the left, and we make a dubious ferry to join him over there for a further scout. The rapid goes, but a large hole lurks downstream and the slide looks like it would like to put you in said hole. We walk and get setup while Jonas decides to run it and has a great line. 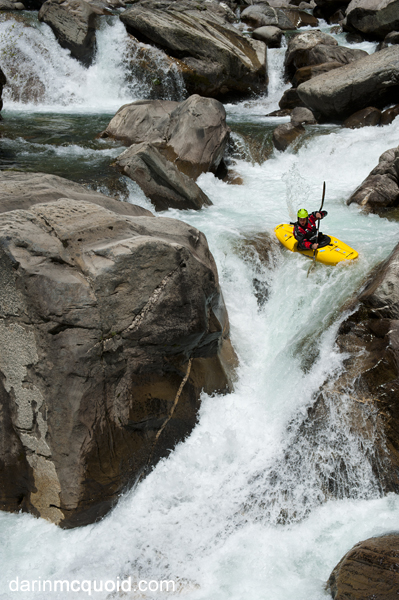 We all run a sneak on the far right here, just barely big enough for a boat. 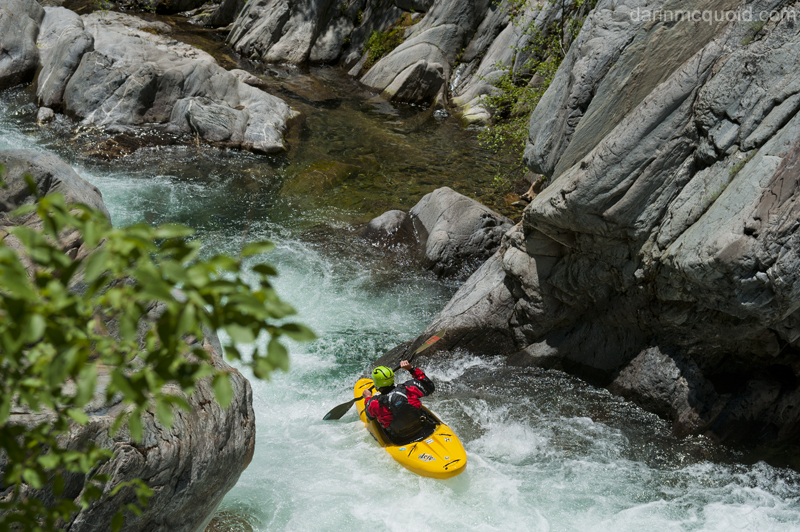 Downstream the river is actually quite good. Daniel boofs away. 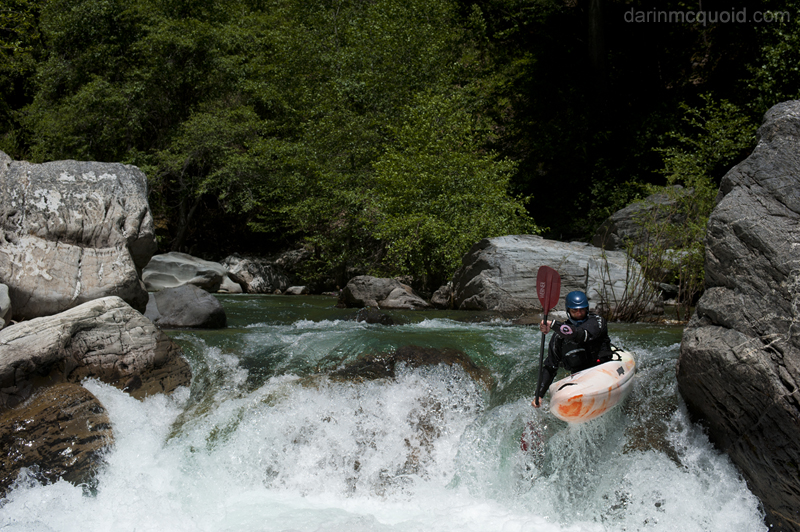 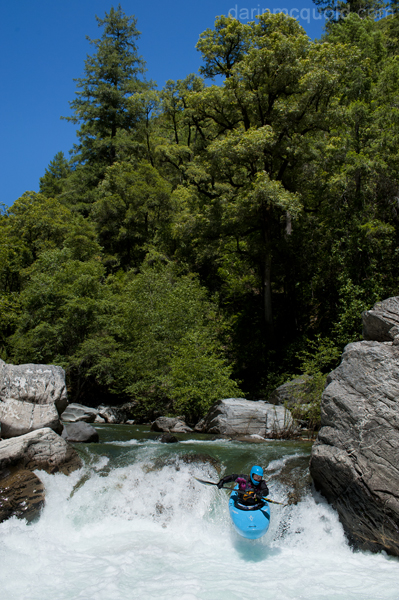 Hey this is really good. More clean boofs! Daniel enjoys a good one. 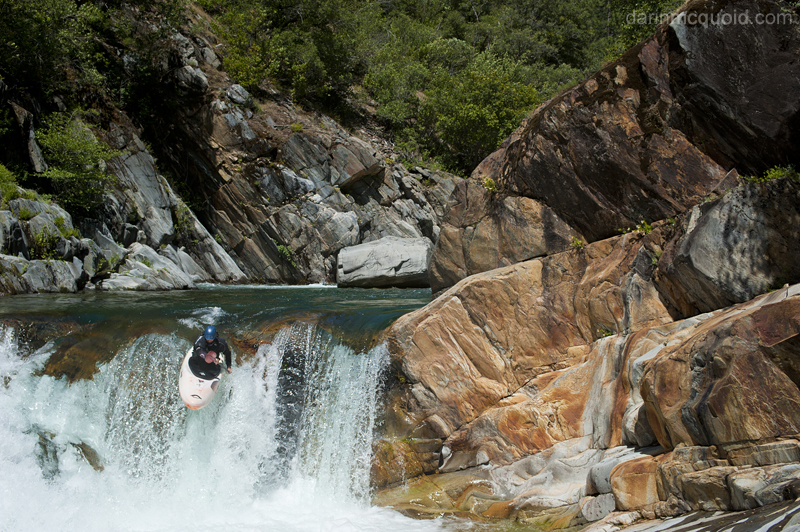 Jonas stroking the same. Really cool rocks in this section. 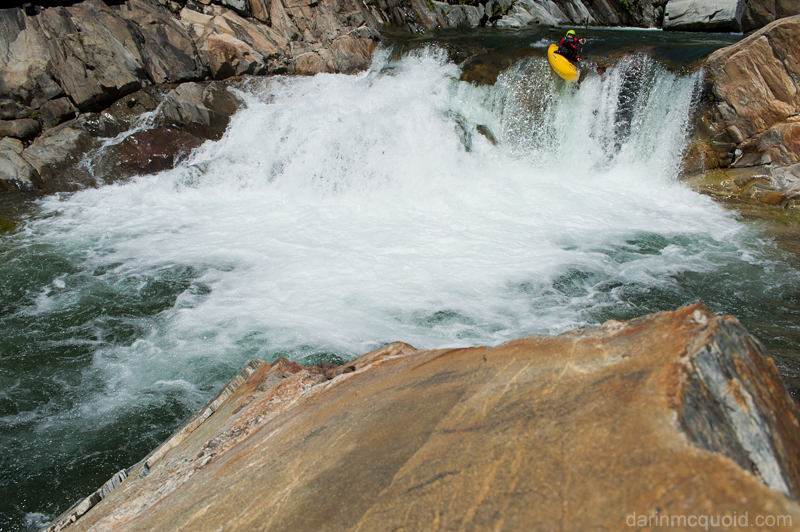 A couple more fun ones and we are at the highlight of the run. The Devil's Gate is often the only rapid that people take media of. It's also the only clean bedrock rapid of the run, and a true gem in the finest of settings. There is a big hole in the lead in too, so it can be spicy. If you don't want the extra spice, it's possible to seal launch in from the right side. Not too easy though, as it's not perfectly flat and taller than the lead in.


Diane gets ready for the Devil's Gate Slide. 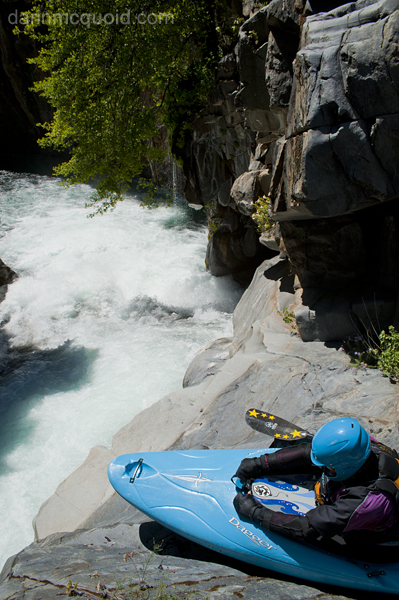 Jonas probed the lead in and lines up a nice boof. 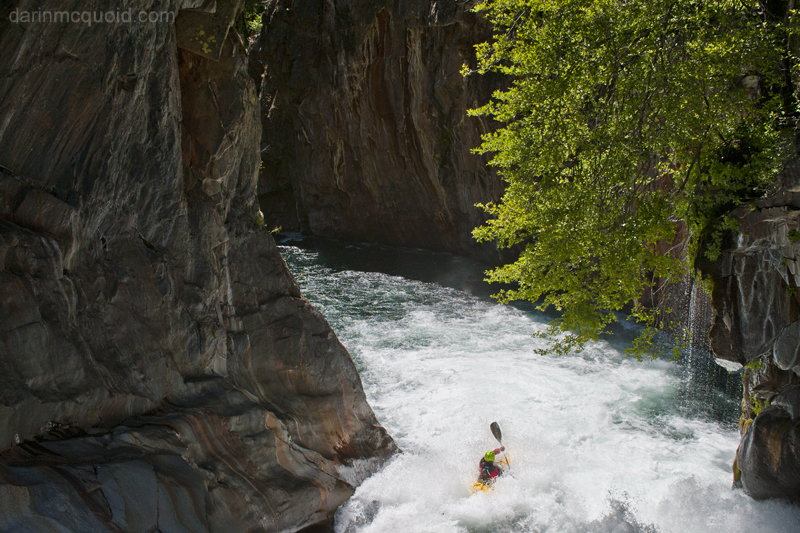 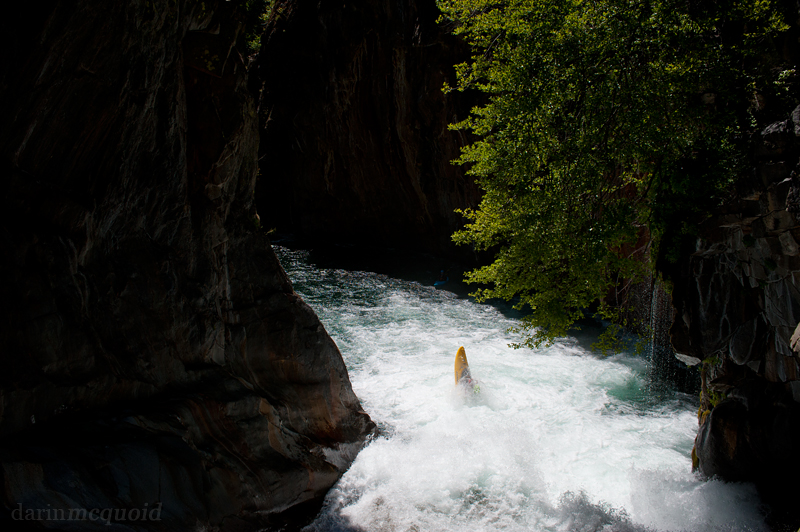 The feeling of this place is bit beyond my articulation. Imposing walls, a solid rapid and lush foliage with a spray of tributary water. Life is good here. Images do it no justice.


Daniel finishes the bottom of the Devil's Gate Slide. 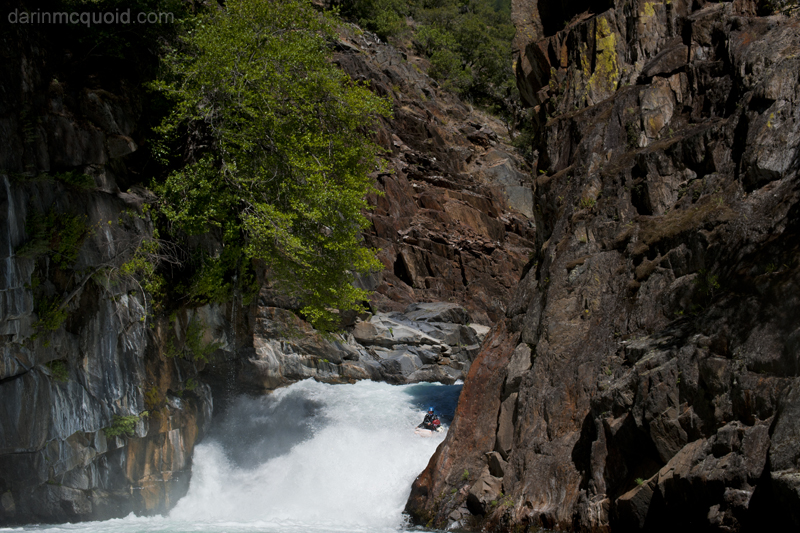 We got a late start to the day and cruise downstream hoping most of the action is over. It isn't. We run one rapid that ends in a kind of pool that's really just a big sieve. Thankfully the water goes deep to go out, we paddle to the end of it and portage two feet.  Then we scout a big rapid on the right. Big, twisty, bouldery. Not feeling it we walk on the right. Jonas is feeling it, not sure how he does that all the time. Makes me happy to have someone to take pictures of though.


Jonas on the tricky lead in. 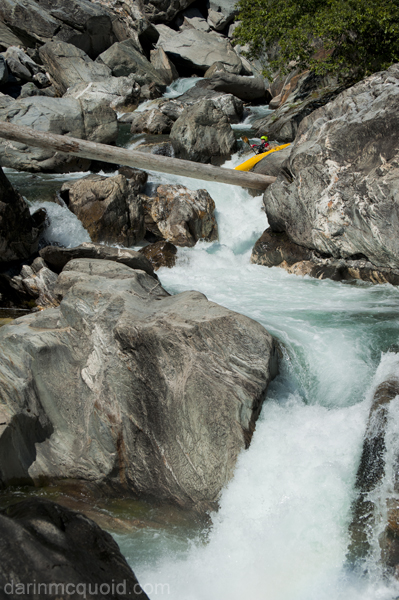 Finishing with the boof. 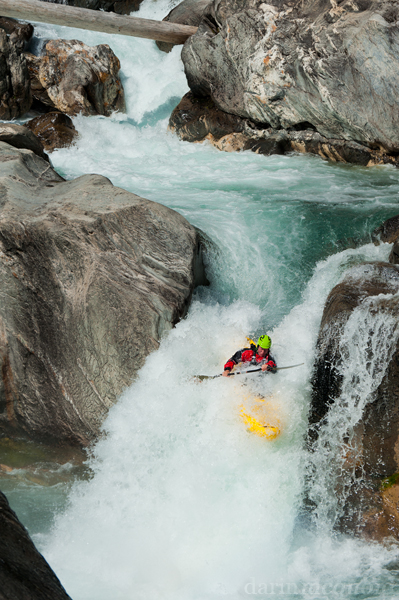 Pretty big run out to the rapid too. 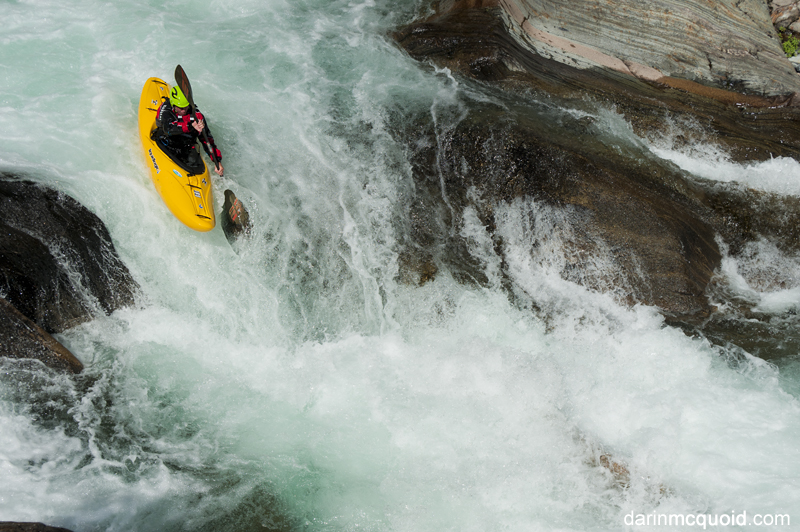 Now it's more or less over. Miles of class II with an occasional III. More water would be really nice down here. With the flow flows it defines tedium. We're all ready for take out, and the sun is out of the canyon as we pass an old cabin. Then I realize something. During the shuttle Jonas had passed me our car keys. I normally leave them in the car. I did just that. Only this time the wrong car. Knowing we have an epic shuttle to figure out, we put our heads down to paddle and find that the take-out is around the next bend.


Thankfully we manage to get a ride first thing after showing up. Daniel heads up the hill while we scour firewood off the roadside. 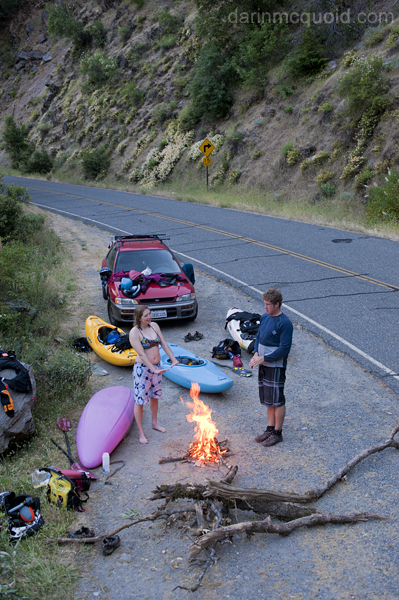 Amazingly he has fantastic luck getting a ride out the dirt roads to his car. It still takes a good while, and we are only too happy to see his headlights. 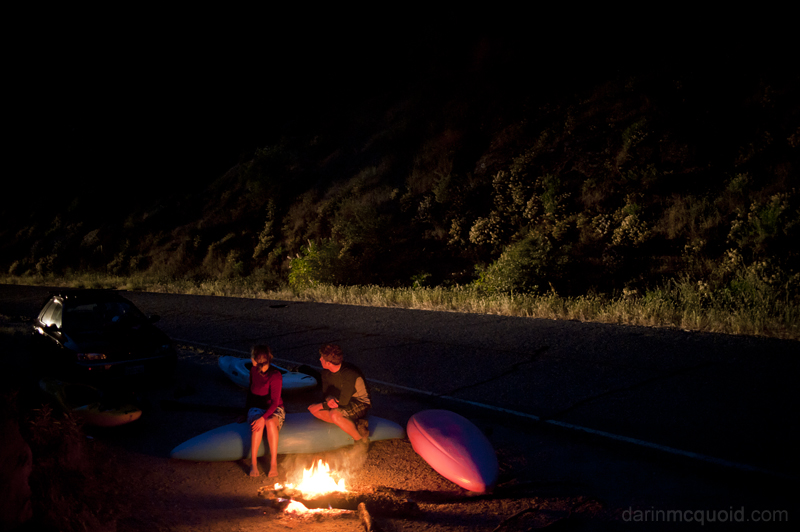 
For more detail on the river check out Daniel's write-up at A Wet State. Shuttle beta liberally lifted from his site:

Put-in: Go back up to Foresthill, and continue on Foresthill Rd for another 16 miles. Just a shortway past Mumford Trailhead (Generation Gap trailhead) is a sign pointing “8 miles to Deadwood town, 7 miles to Devil’s Thumb and something else I don’t remember.” Turn right on the dirt road. Follow for ~5 miles, stay right on the major road throughout. Near the 5 mile point, you will see a sign on the right pointing “Devil’s Thumb” to the left, turn left. In 200 yards or so you hit a T, turn right. Follow this another 1.5 miles or so to the trailhead on the left. You will drive past a trail dropping randomly off the road, keep going. The trail is in a small opening and is 100 feet off the rd to the left and has a small placard telling you of the historical significance of the trail. The shuttle takes 1:15 hours and requires something with a little clearance… no Civics, but any sort of Forester or Outback (even non-subaru vehicles) will have no problem.
HTML Comment Box is loading comments...