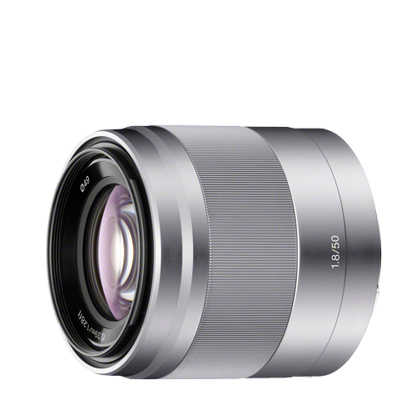 7oz 49mm Filters
This little lens from Sony is interesting. It's very, well, Sony. That's to say slightly different from Nikon and Canon who seem to mirror each other. The Sony 50mm f/1.8 OSS is $300 new. Nikon and Canon have been making 50mm lenses for over fifty years and their 50mm f/1.8 lenses have come in around $100 for quite some time.  This model isn't a lens for Alpha SLRs and can't cover a full frame sensor, so in many ways it comes across a 85mm equivalent for the APS-C Sony NEX system. This is a nice classic length for portraits. A new Nikon 85mm f/1.8 AF-S runs $500 and a Canon is $370. Now this little lens from Sony doesn't look like such a bad deal. On top of that, this is the only lens of the 50mm or 85mm focal length with any type of stabilization. This is actually significant because when shooting portraits it's often possible to drop shutter speeds to 1/50th or lower and utilize stabilization. Why Nikon and Canon don't offer stabilization in their 85mm lenses is a mystery to me. All of the above taken into account the Sony 50mm f/1.8 looks to be a good value. Let's move on to how it performs in the real world.


First, on the river.  Galen Licht on the North Fork Mokelumne 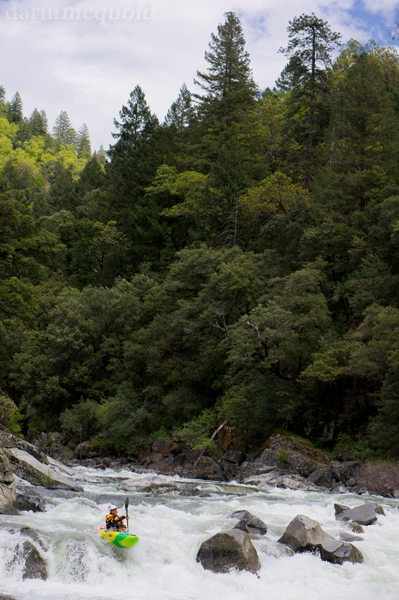 A 100% crop with no sharpening applied. 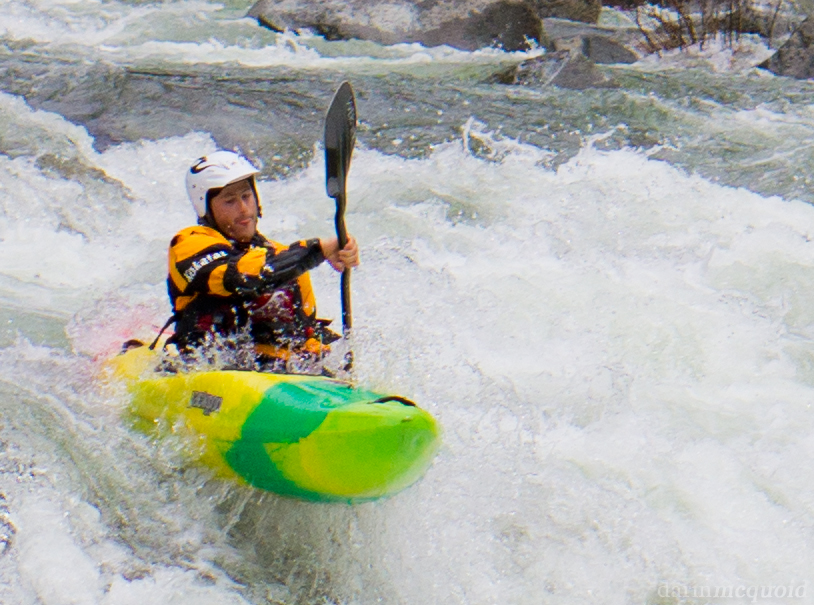 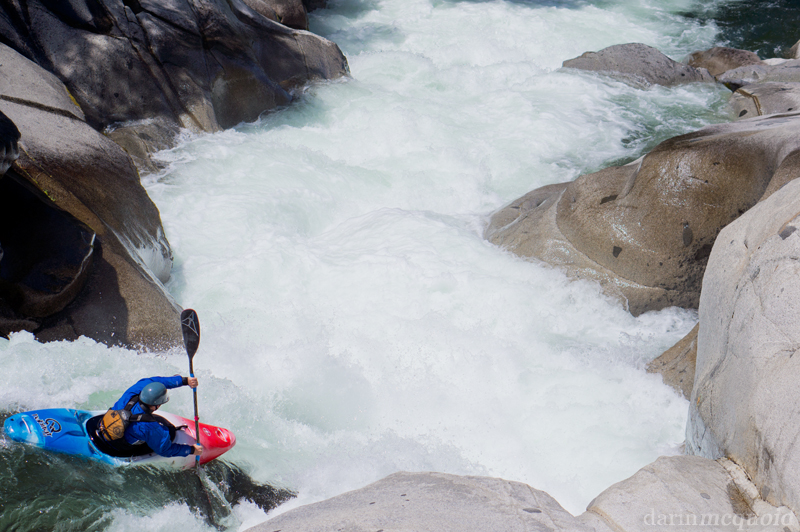 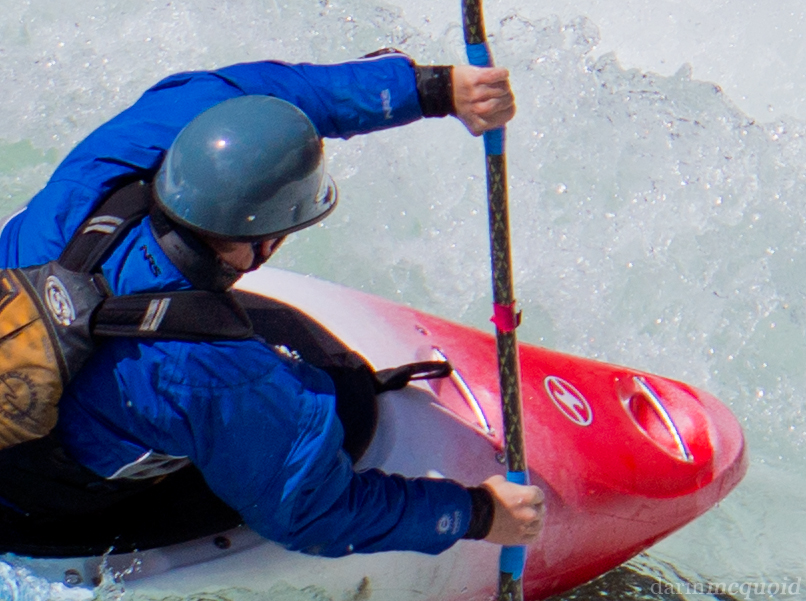 Image quality is great, just as you'd expect for a f/1.8 lens stopped down two stops. Focusing is decently fast, for contrast based AF. Certainly not even as good as a kit lens with phase detect AF. As far as build, the Sony 50mm f/1.8 OSS feels good. The outer body is metal, but the lens is still light. Manual focusing is typical for the series with a "fly by the wire" connection that I'm not a big fan of. It's better than most Nikkor AF-D lenses but below a good AF-S for manual focusing. This lens is larger than I would have expected, slightly slimmer but longer than the 18-55mm kit lens. Shooting a portrait I tried to use continuous AF, but found it has hunting for focus too much and ended up shooting manual to nail focus on the eyes. Ironic because it seems like AF would be a big advantage that this lens has over third party lenses adapted to the NEX system, but the AF just isn't up to the task in dynamic situations. 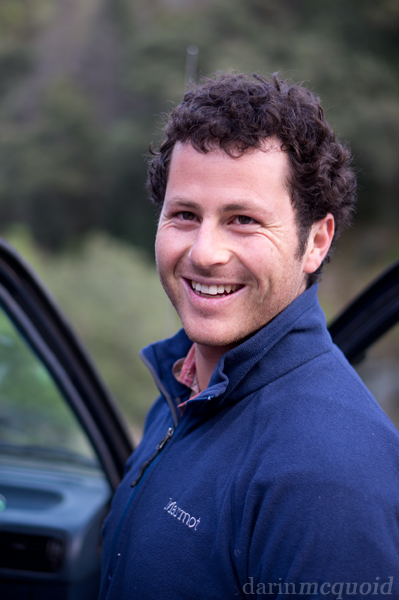 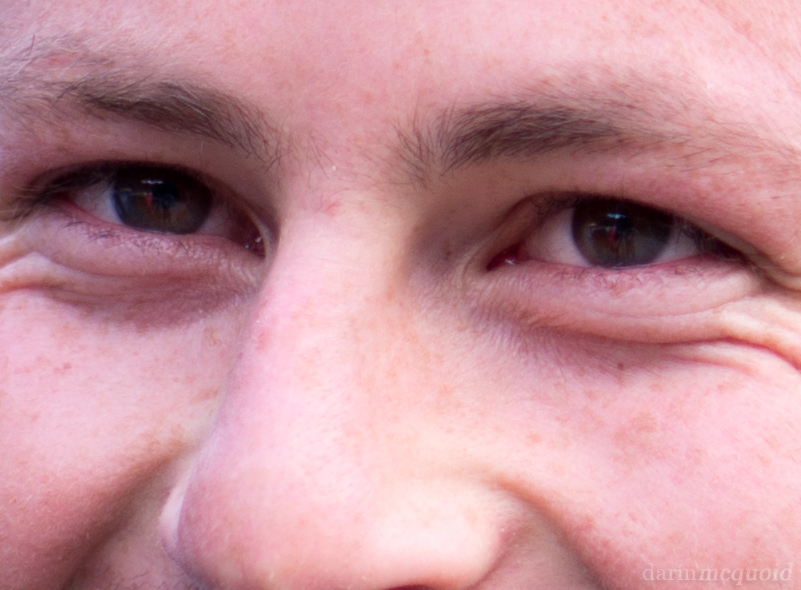 This lens is very sharp wide open, and in my opinion a step above the Nikon and Canon 50mm f/1.8 counterparts.


I was really enjoying my Sony 50mm f/1.8 OSS. Until after only four days of kayaking the OSS died and the lens made grinding noise. I'd assume it was a sample defect, except a friend experienced the same issue after only two days of kayaking. I really wanted to love the lens, and in some aspect it's a great lens, but obviously not meant for kayaking or any kind of abusive treatment. For more durability and similar sharpness look for a used Nikkor 50mm f/1.8 AIS or Nikon 50mm f/1.8 Series E for a fraction of the cost. You'll lose OSS (irrelevant for kayaking) and be forced to manually focus, but the lens will last forever and be a fraction of the cost. If you'll never use it roughly, I highly reccomend it.