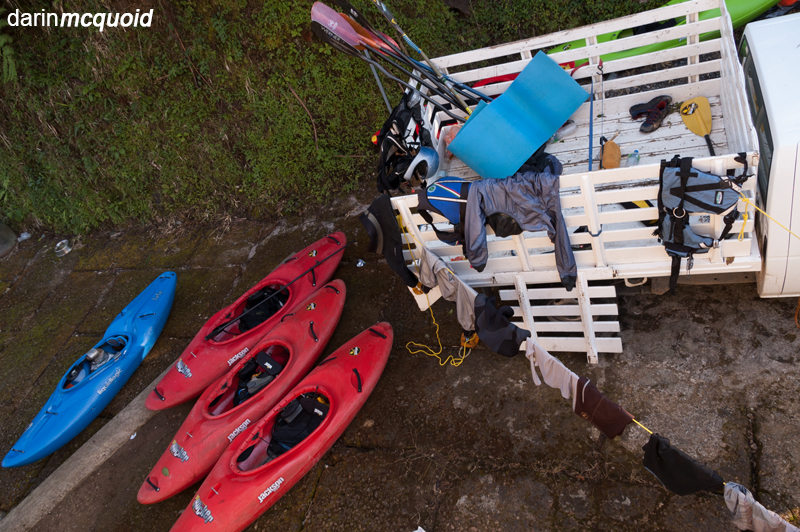 The boys put in some hard work to make our third day on the Middle Alseseca possible. On day two they ran one serious kilometer long section that will be covered when I get pictures come in, as I was sick that day and hiked out. That will be considered day two of on the water exploration. If you’re adding up the numbers from previous posts you would note that in two days we covered about three kilometers, not the six kilometers planned. Thanks to great liaison work by our local shuttle driver Israel, he had figured out two access points that were not on the map. One of these points was a Trout Farm/Restaurant owned by the amiable Pepe, who let us use a trail on his property for river access. The second day the group had hiked out at the Trout Farm, feasted at Pepe’s restaurant and decided that the next portion of river dictated a full days scout, which was completed while I was recovering from illness for another day in Tlapacoyan.
Scouting all day revealed a large entrance drop, followed by a gigantic waterfall that required a throw and go or rappel portage, and a blind corner that eluded scouting. The topographic map showed that shortly after the major portage there was some gradient and a canyon, then a confluence and things should mellow out to the gradient of the road side section. That’s right, on the Middle Alseseca the mellow, borderline flat-water sections promised gradient like that.

Stories of the entrance drop had me nervous, the report was of a tricky, folding twenty footer into a sixty to seventy foot slide with a questionably clean landing. Eric Seymour and Phil Boyer were both out due to illness, but Eric came along to shoot video and stills from the canyon rim. Our group was down to Ben Stookesberry, Rafa Ortiz, Nick Troutman and myself. We quickly made our way down the trail, seal launched in and only twenty yards into the run were out of our boats to scout the big slide. We ended up spending a lot of time at the slide, getting filming and photography angles set, as well as discussing how clean the bottom was. From up on top it looked pretty bad, a large jet of water was spraying up at a forty-five degree angle from the bottom left side, and the previous scout revealed the bottom right side didn’t go at all. To me it looked like there might be a rock shelf slightly underwater in the landing, but Ben was sure it was clean due to the age of the river, basalt riverbed, and was convinced that the spray was from the velocity and angle of water on impact. He sure can make that Geology Degree come in handy on the river. The inherent danger involved in a drop of this height, combined with the danger of a line that has serious consequences, added to that the entrance drop was not trivial posing quite a hazard on its own, made this drop stout to say the least. The entrance was composed of a folding, twenty-foot waterfall into a small punchbowl. All of the water from the base of the falls was moving into the left wall, and then after pushing into the wall it divided a small amount of water downstream to the slide, and most of the water went back into the waterfall, only to go down deep and emerge on the alleyway into the slide. All these dangers aside we felt the drop could be run with relative safety, and we setup as much safety as possible to extract a swimmer from the initial punchbowl. In reality we all knew swimming up against the wall was not an option, but felt we could avoid the situation. 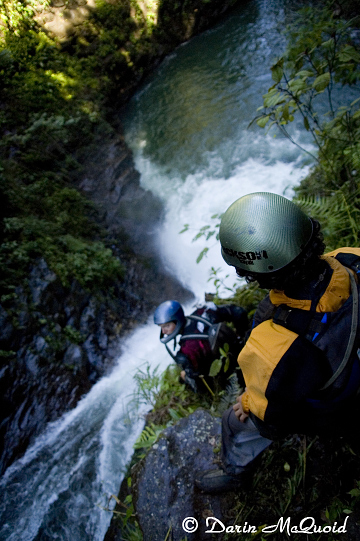 Nick Troutman was fired up about this drop and stepped up to the plate once Ben, Eric and I were ready to shoot and Rafa was in the safety position. Nick cleaned this drop with no problems, and although he did get pushed into the left wall of the bowl he had no problems moving back out into the current and getting left again on the slide. His line is in the trailer, bright green Mega Rocker on the big slide in the middle of the trailer.


Nick Troutman with the fitting name on “Trucha Falls” 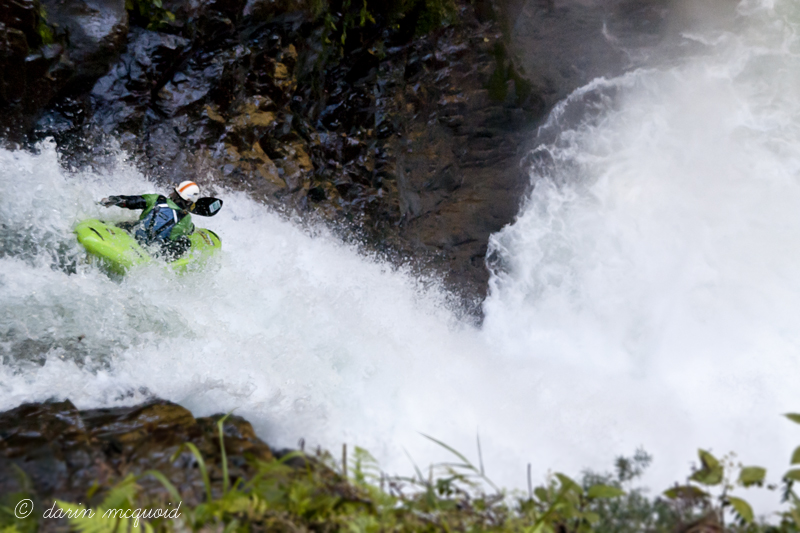 Nick’s clean line got Rafa all stoked about that drop, as if he wasn’t already, and he headed to his boat and nailed a similar line.


Rafa Ortiz on the entrance drop of “Trucha Falls” 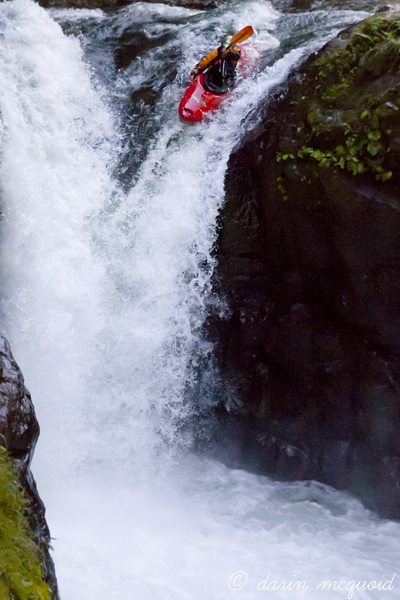 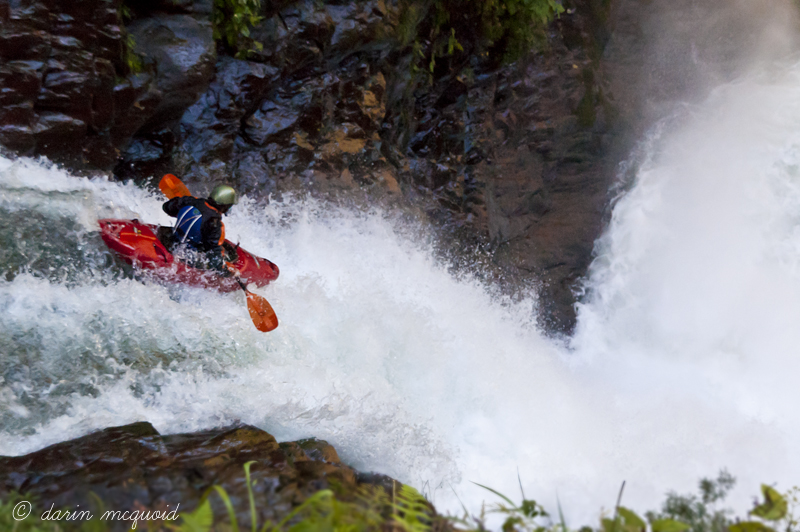 Now it was my turn, and I was having second thoughts about running this rapid. I was pretty worried about running the entrance drop, I had made a large mistake on this expedition. I had heard horror stories of flying with a kayak, and in light of that I brought down a beat up Pyranha Burn, Small, that I had only paddled a handful of times and only marginally liked before coming down, planning to leave the boat in Mexico. Once in Mexico I quickly figured out that this boat was way too small for me to expedition boat in, resurfacing was becoming a huge issue, as were ledge holes and getting stuck in the bottom of most of the waterfalls we ran. The pure size of this drop was too, with my largest drop before a comparably paltry thirty to thirty-five feet. With the folding entrance drop I knew I would go deep, but would I resurface before being on the left wall? Eventually with some encouragement from Ben and realization that this is what I had come to Mexico for, I headed up to my boat. I did go deep on the entrance, resurfaced about six feet off the wall and popped a quick roll before contact with the wall. As I made the move left across the lip of the slide I had no time to notice how big it was, I was too focused on keeping my boat left and straight towards the bottom. Right before hitting the boil at the bottom I got a small skip from the slide and on contact with the water had my paddled ripped out of my hands. I tried several hand rolls but wasn’t able to roll, swam, and found myself standing in three feet of water off to the right of the slide. I quickly drained my boat and grabbed my camera to get pictures of Ben.
Ben had a bit of a bold plan for “Trucha Falls”. His plan was to take down all the ropes we had used to move people up and down the cliff for safety, then seal launch in from fifteen feet above the slide, land in the alleyway entrance and drop the slide. Ben reassured us all that he had been practicing seal launches for the last year and was all about this. I got setup at the bottom and sun came out, giving us spotty lighting on the slide.

After a few tense moments we heard a whistle blast and then Ben came screaming down the left slide of the slide. 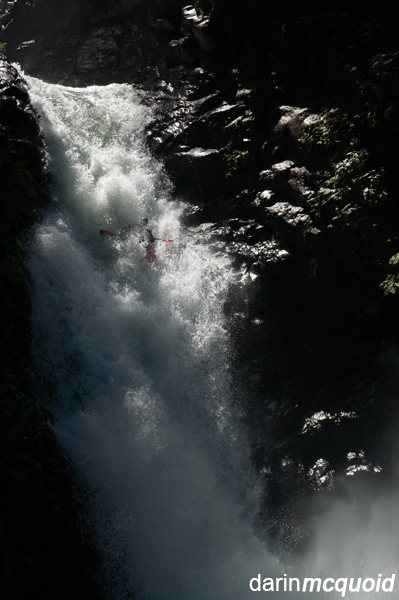 High fives all around, and we paddled forty yards downstream to the lip of the monster waterfall. Nick gave it some serious thought while we all worked hard and persuading him that the twenty foot sliding entrance would give you an auto-boof off the eighty to one hundred foot waterfall. Scouting revealed that rappelling would be a pain due to thick jungle growth down the cliff, and the throw and go would be enormous because the jump spot was above the lip of the waterfall. We quickly decided on the jump due to ease of use, and comparable safety to rappelling with a machete to clear out the undergrowth. I led the way on the jump and it was much larger than expected, even with a perfect landing it was a painful impact.
Rafa Ortiz jumping the auto boofing big boy.


He jumped from the rock at the very top of the image. 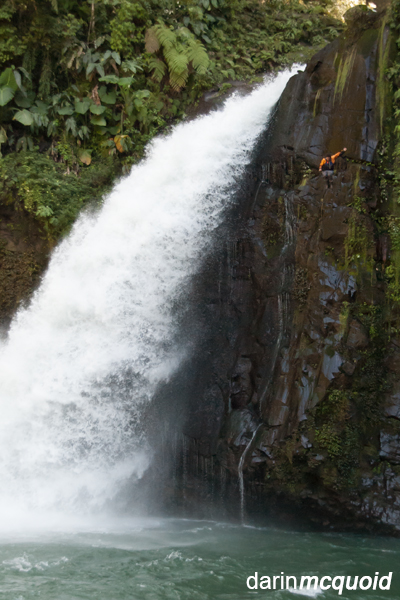 Nick Troutman, getting some off the same jump. 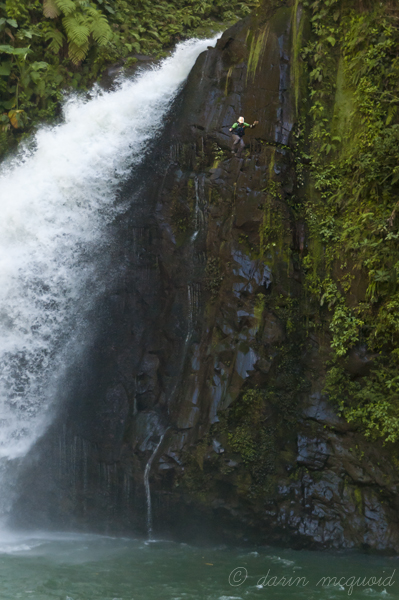 We were all wondering what we would find downstream, did all the gradient get eaten up by the monster waterfall, or were there several more significant drops before the confluence? The pool from the waterfall drained into what looked like a boxed in twenty footer, and we all got out to scout. 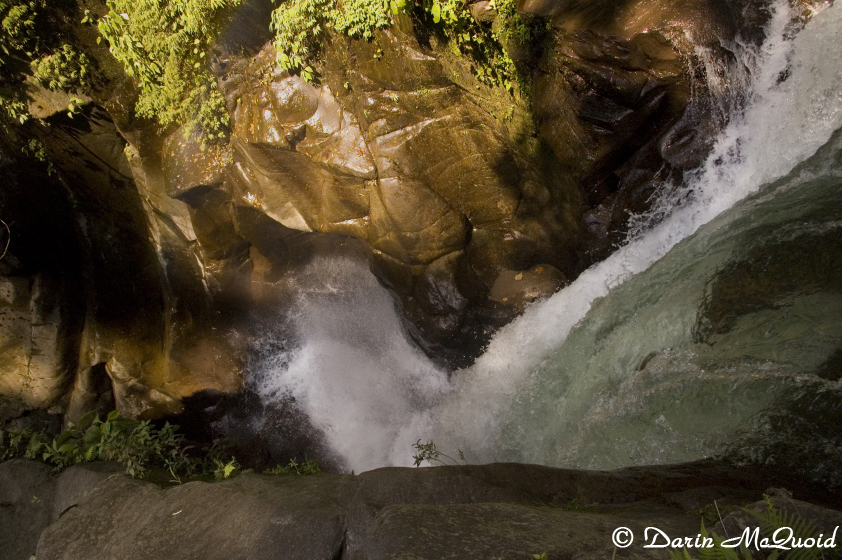 You might wonder what’s going on here, as pictures and video can’t do justice to this abnormality. The water falls off a beautiful twenty-foot waterfall, directly into a lava tube. It then proceeds underground about fifty feet, and resurfaces directly above the confluence with a tributary that dumps water off multiple ten to fifteen foot waterfalls into the river. Spotty lighting made photographs worthless, and words do nothing to describe the beauty of this spot. At the confluence the river curved around the corner dropping a sizable amount through vertical walls. A quick scout showed us one of my favorite rapids of the whole trip, a fun slide that dropped about thirty feet, was big and splashy with a large friendly hole at the bottom. The gradient really did mellow out after this, and we ran boulder gardens that still necessitated scouting due to the vertical canyon walls, and were all relieved when after a kilometer of boulder gardens we were at the footbridge that wasn’t on the map, but was discovered by Israel. We rejoiced to be done with one of the major gradient sections of the Middle Alseseca, and hiked out a steep two miles to road access.