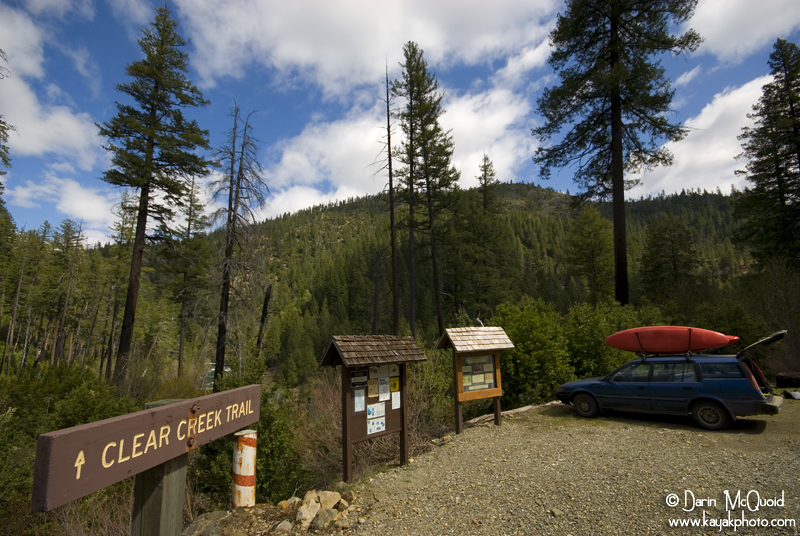 Clear Creek is one of my favorite runs of all time. Clear Creek has epic wilderness scenery, beautiful scoured gorges and once the road is near, it's out of view other than one bridge high above the final gorge. Water quality is of the highest standard as well, as Clear Creek drains the Siskiyou Wilderness. Clear Creek is generally a spring run due to snow melt, and flows from Feb-June in most years. This run doesn't see as much use as it should, probably due to a vague IV+ mention in "Best Whitewater of California", and the mile hike in. The hike in itself isn't bad at all, in most years the trail is well maintained and has a very mellow gradient that can be completed in 20 minutes or so. Some years the trail is in worse condition due to a rough winter. As of 2008 it's in great condition with no trees across the tail, and all wash-outs repaired. 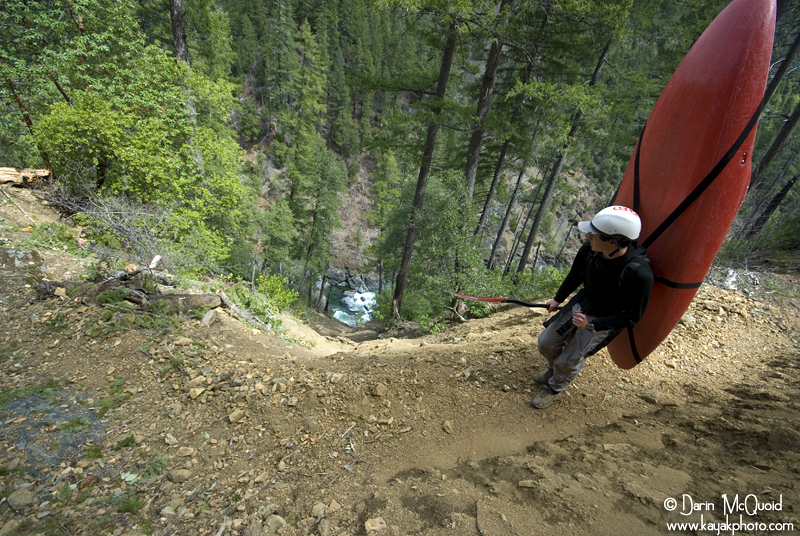 The hike is done, Jon Vengley gears up for a great day. 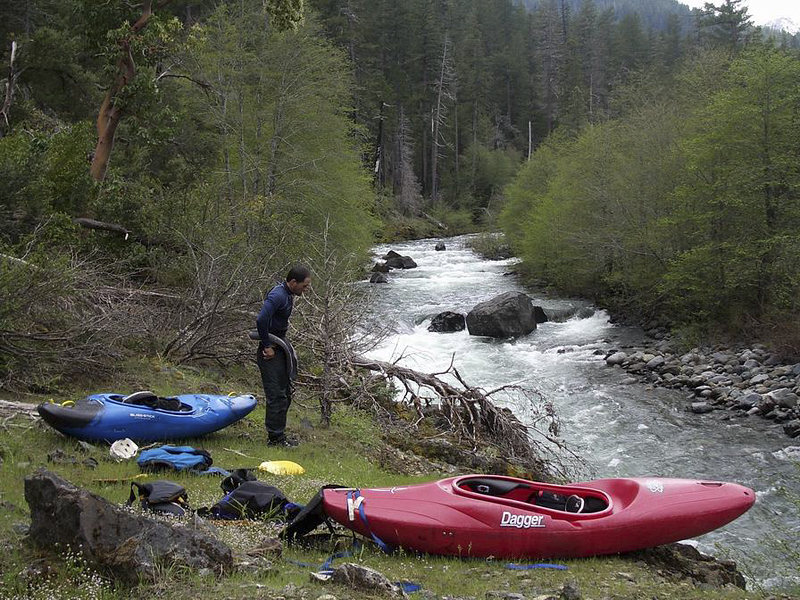 The run itself is mostly solid class IV rapids with a big water feel, although it does have two solid class V rapids that are often portaged, and one mandatory portage near the end, followed by one more V.
Here is Jon in the second large rapid. The log he is ducking in this one moved on downstream somewhere later in the spring. We met up with two Arcata boaters about halfway down the run, and they said they both got "good surfs" in a large hole on the river left side of this rapid. Meeting up was a strange occurance, Jon and I seemed to be the first on Clear Creek this year and they just happened to be on the same day.


Jon Vengley in the first set of rapids. 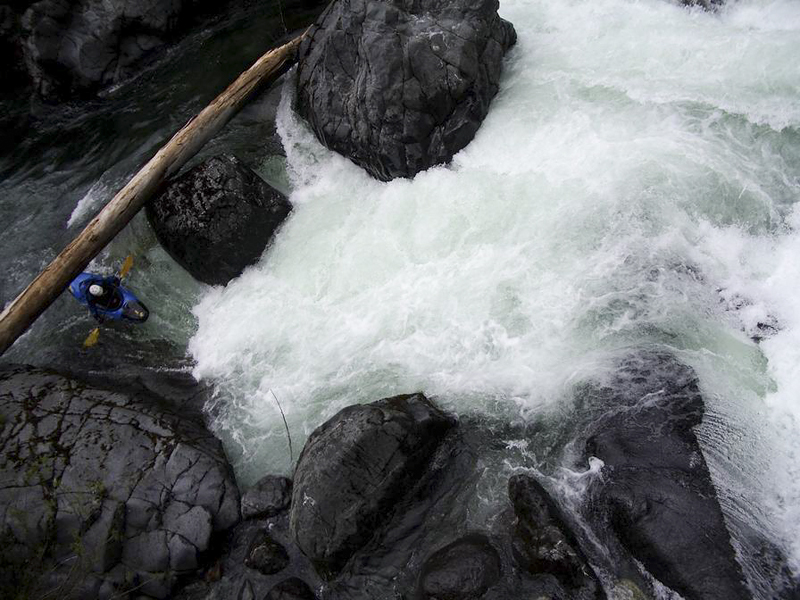 Jon Vengley boofing to avoid the "good surf" on the left side. 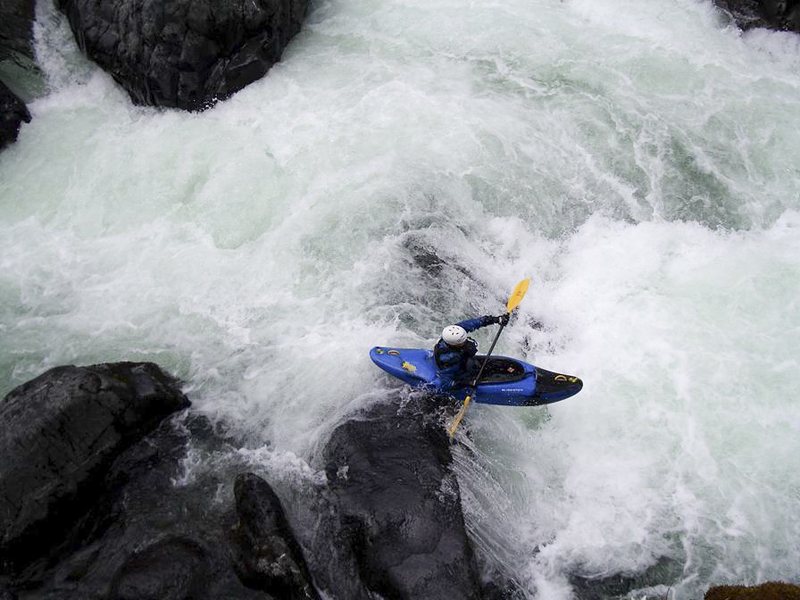 After "good surf" this rapid is up next. The right channel is the ideal route, but a lateral hole likes to surf paddlers to the chunky left channel.

Jon making the left to right move in the right channel. 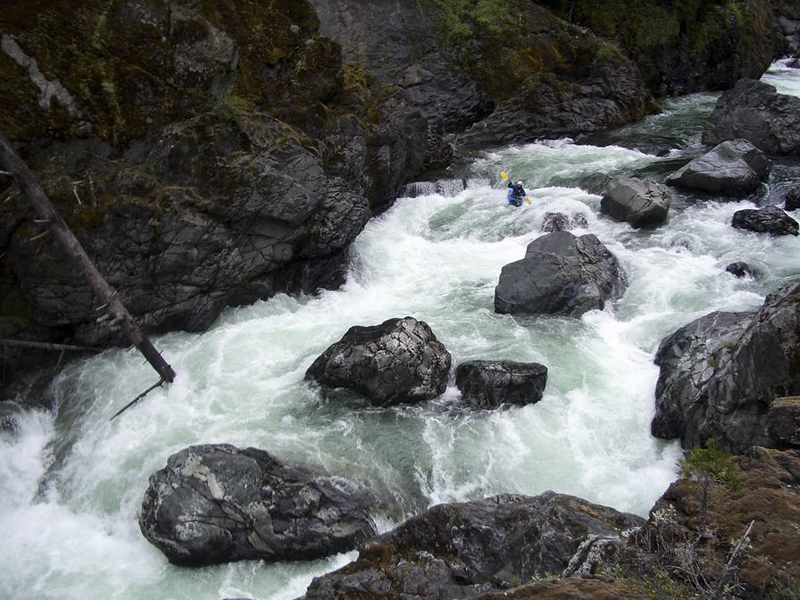 Dan Thurber about to punch a big soft hole at the bottom of the right channel. 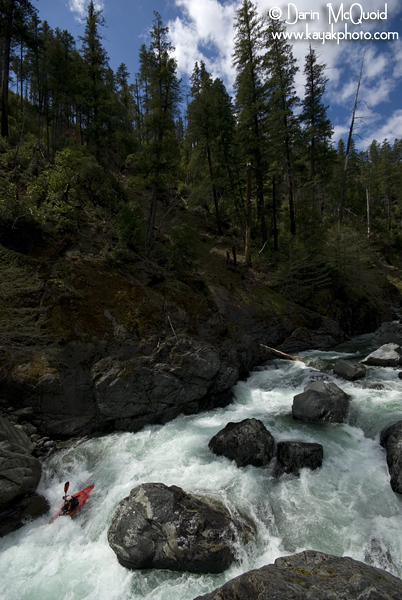 We continued to boogie through a few more rapids spaced out nicely, enjoying gorgeous scenery. 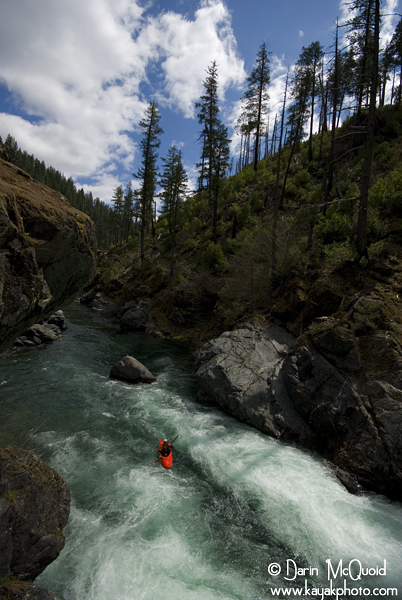 After a few fun rapids is the first V that some choose to portage. It's a pretty simple rapid, most of the flow in the entrance pushes into an undercut outcropping on the right, then proceeds downstream into three chutes, with the center and right doors going. With the higher flows it's well covered and we ran it moving right the whole way down, and I managed to botch any good pictures.


Shortly after it we scouted this nice big hole, and Jon tried a new hole punching method. 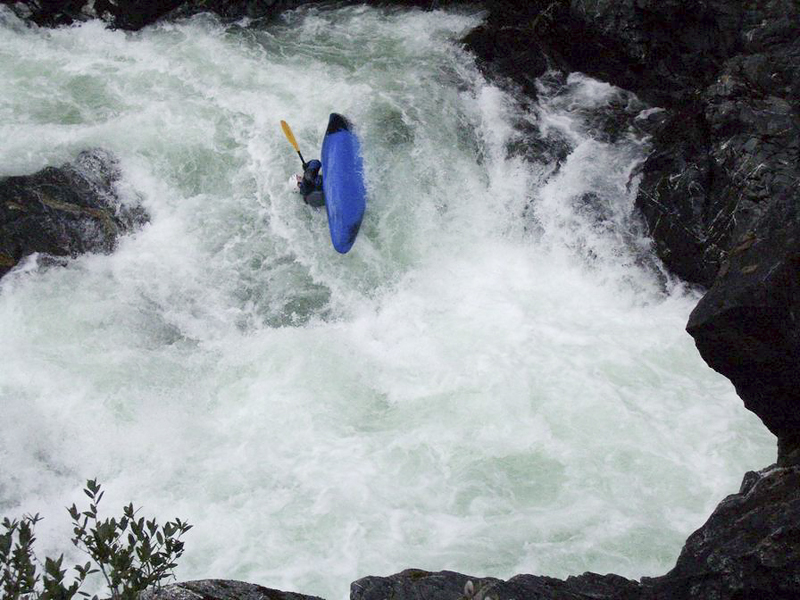 Quite soon after this we got out and scouted the second V that is normally portaged. This one has a big pushy entrance with a large hole at the bottom, followed by swift moving water to a boof move to a "line" through a sieve. 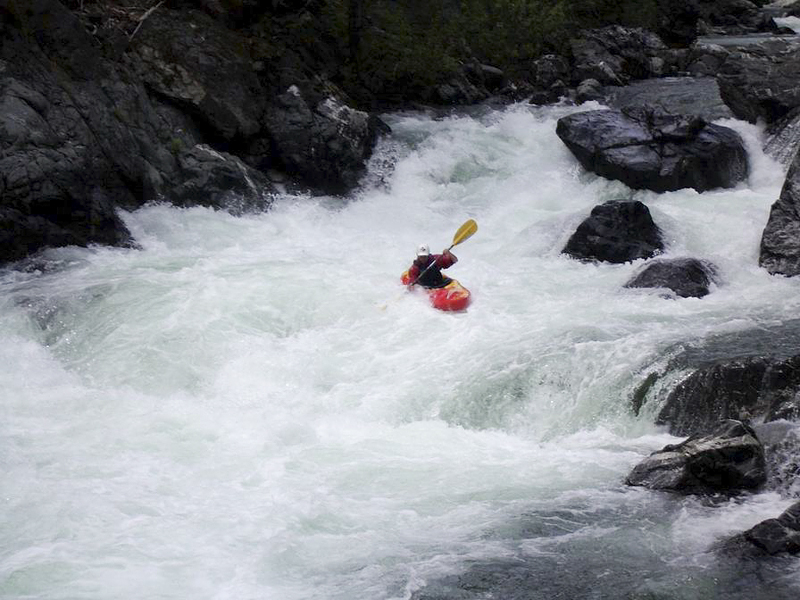 Ben making the boof look easy in the middle move. 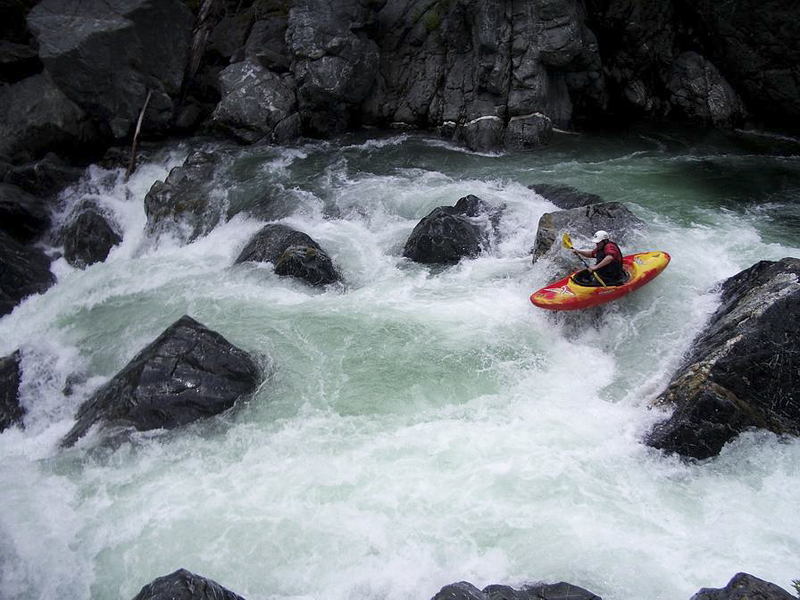 My slow camera failed to capture Ben finishing the drop, so here is Jon finishing the "line" through the sieve. The line is a little random, Ben had the cleanest line and hit a underwater rock with his boat, yet Jon and I both had sloppy lines in the bottom boof and didn't hit anything, go figure. This rapid doesn't really have a clean exit, thus no "line" just try to stay upright and straight, and away from the other channels. 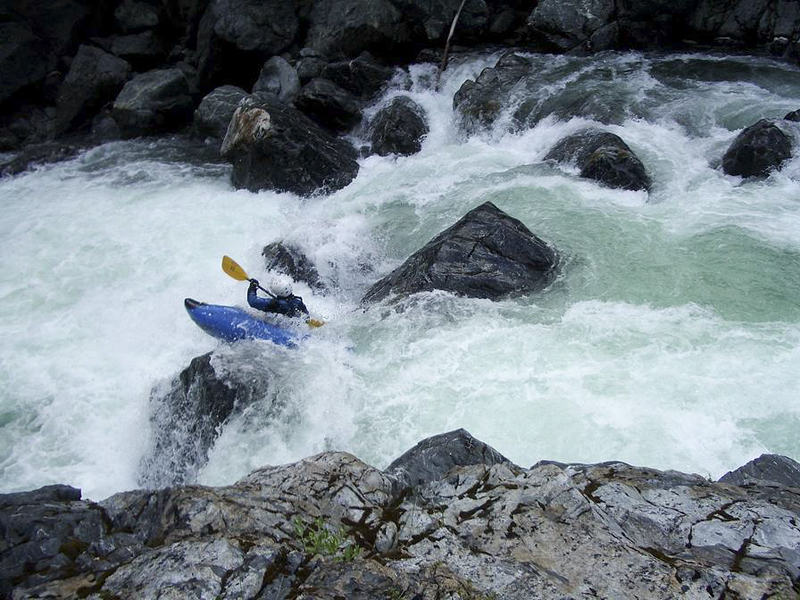 Here I am running the top of the drop in this video. I eddied out on the right for several minutes trying to find my contacts again. Downstream from the second class V the gorge really starts to get fun with read and run IV-IV+ rapids encased in a wonderful canyon. 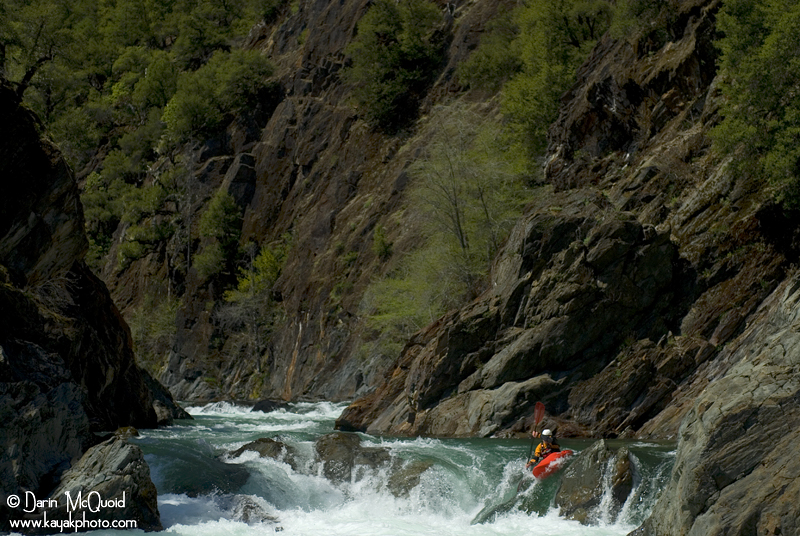 At lower flows you can scout, at high flows it's read and run, a total blast with lots of big, soft hydraulics and strong currents. 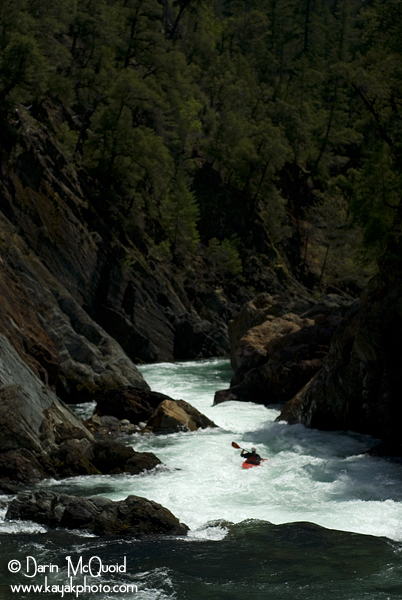 The run stays good with low flows, it just turns into technical class IV creeking. This drop can be seen from the shuttle bridge, and is a nice hole at higher flows. 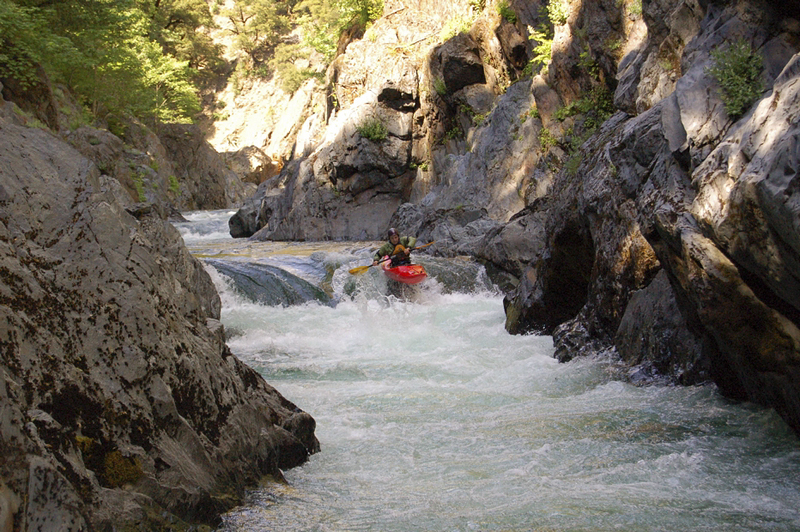 Canyon scenery with the shuttle bridge. 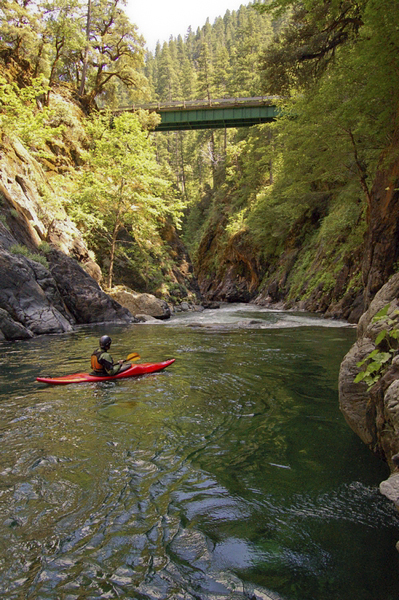 After the bridge passes far overhead and you enjoy both the walled in rapids and the great scenery, keep your eyes open for a waterfall on the left.
The waterfall on the left is actually part of a triple set in its own canyon that is stunning, and also marks that the mandatory portage is coming up very soon. Just downstream of the waterfall make sure you catch the eddy on the right above the obvious horizon line. If you have a three or more in your group space out, there is not a lot of eddy room in this spot at all. Its best to go one at a time and catch the upper eddy, although there is a boat sized eddy about five feet further down. This portage involves a 8' or so seal launch. This is the portage, I have heard of people missing the eddy and swimming through it. I wouldn't want to, make sure you catch the eddy fairly high up.
The Portage
Tristan Ragsdale seal launches after the portage. 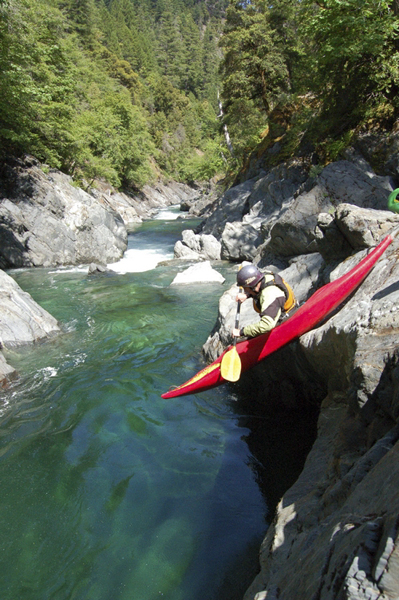 Soon after the portage is the last big rapid, "Cottonmouth". This big V- rapid can't be fully scouted due to the gorge, and is must run. It's a beautiful three move rapid. The entrance has changed each of the last two years, and is currently a strong right to left move, followed by a move back to right of center through a seam, then try to line her up for the big sticky hole. All I can suggest is hitting it hard, the line changes with flows and can't be seen from above.


A little too slow to catch the boof in action...but this shot shows some of the nice canyon walls. 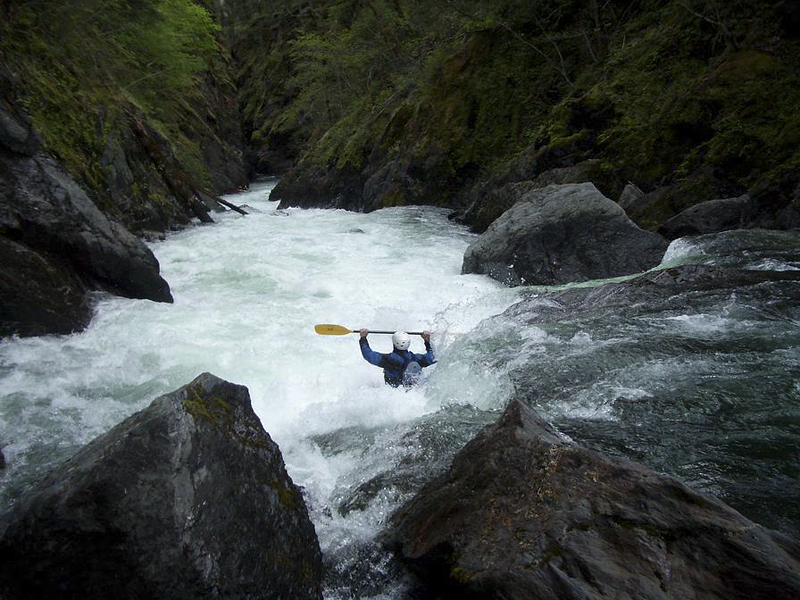 Jon moving right in the last one 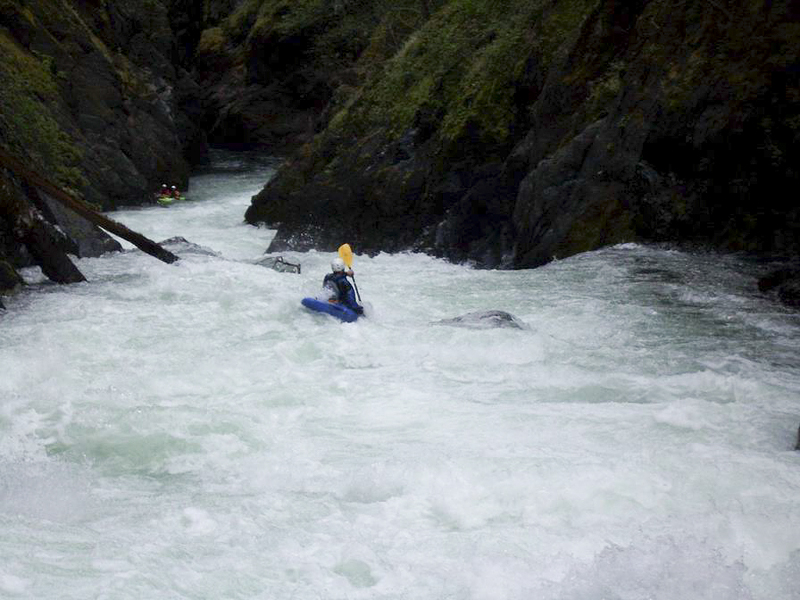 One drawback to this run is once you know it a little, it goes by fairly fast, but a side creek can alleviate that problem. Rocks at the top of the final rapid shifted in the winter of 06/07, and again in 07/08. Seemingly the hole at the bottom of the rapid also got a lot more stout, and is very sticky at the right flow in the high range. Thankfully the swim is mellow. Thanks to Nate Barnard for scrambling around through the poison oak to get this photo showing the entrance from above. Located just below the bottom of the photograph is the large final hole. 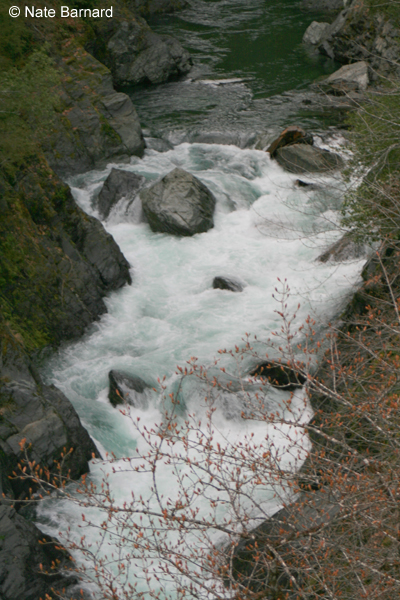 Top to bottom of the whole rapid. 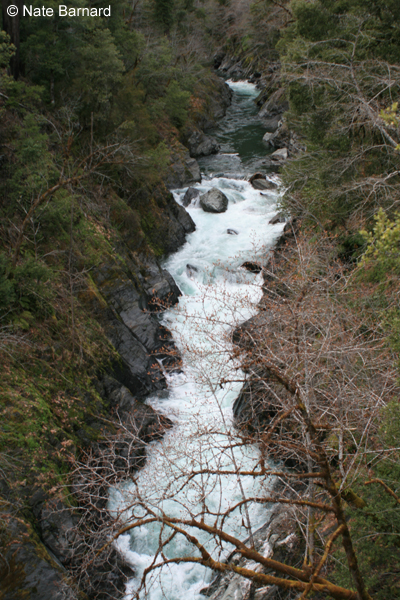 Takeout: Highway 96 to Wingate Bar, about 6 miles down river of Happy Camp. At Wingate Bar turn right (if going downriver) and follow the signs towards Clear Creek Trailhead. About 4-5 miles in, keep your eyes open for Slippery View River Access. I suggest hiking down to the river so you can know what your takeout looks like, its easy to blow by on the run.

Put-in: From Slippery View, continue up the dirt road about 2 more miles. Follow the signs (right turn after large bridge) The bridge you cross over gives you a good view of some of the lower gorge and is a scenic stop. Drive on up to Clear Creek Trailhead and hike in about a mile, until you come on a green bridge crossing the creek. We put-in just upstream of the bridge on river right.

Flows: I've always judged my flows for this based on Indian Creek @ Happy Camp. When Indian Creek was at 700 this run was at a nice medium flow, with Indian Creek at 1000 the run was still a go, but much more pushy and committing in the canyon, had more of a V feel. Highly recommended at either flow.