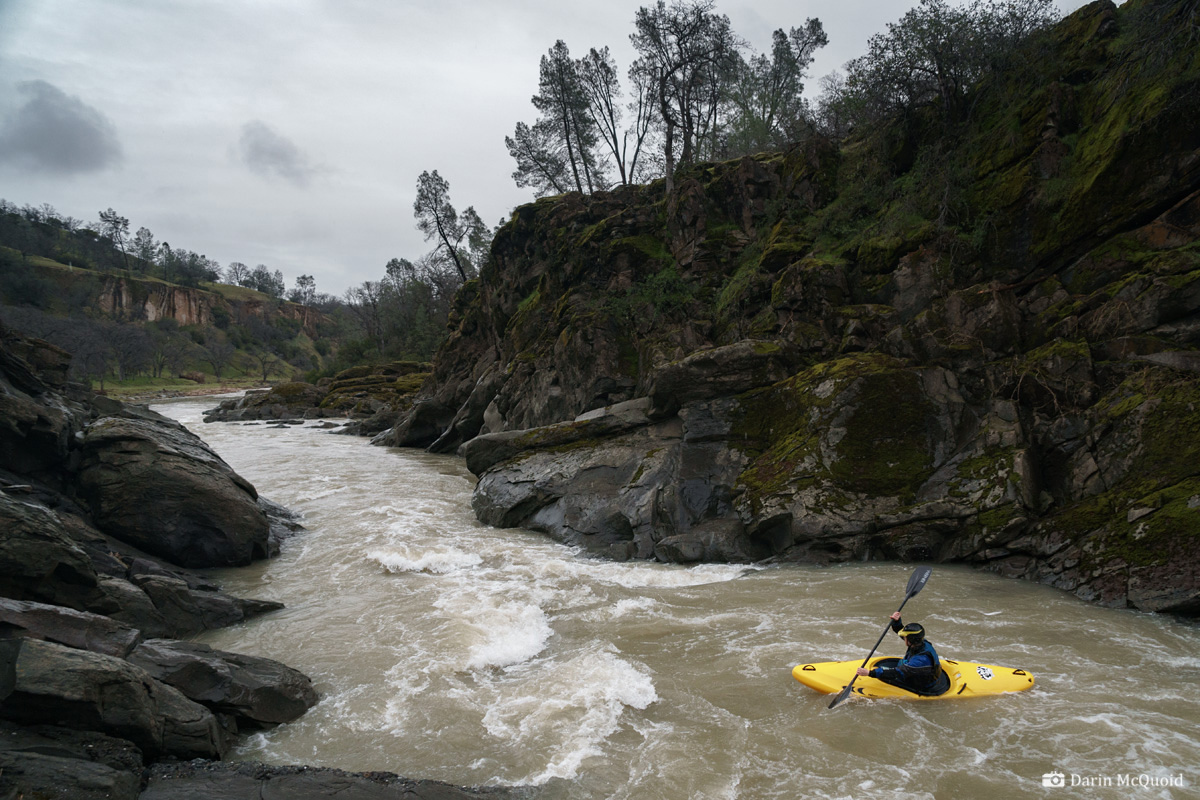 One day scrolling through Dreamflows for the Sacramento Valley, I noticed "Elder Creek at Lowrey Road". Curious for more, I clicked on the link and there were no descriptions available, simply a reference to the out of print West Coast River Touring by Dick Schwind; Elder Creek - Lowrey Rd to Paskenta Rd (17.2 miles, III, Schwind p194). Seventeen miles of class III? With a guidebook written in 1974, I blew it off as a class II run. Yet there is nothing wrong with class II, well, except that all too often grade II is undefined riffles and shoals. Still, if it was listed as class III and there is no modern information about it...

About a week later Shannamar Dewey and Ashley Brown were game to join and see what Elder Creek was all about, even if it was seventeen miles of nondescript class II through the Sacramento Valley. I'd debated trying to take out in Rancho Tehama, but it has a bad reputation. I figured we'd spend more time driving in circles trying to find access to the river than we would spend just paddling down to Paskenta Road.


When I mentioned doing the run, someone jokingly reminded me to "be careful of cows". Views from take out on Paskenta Road with the only slightly melted Camp Fire survivor Subaru. 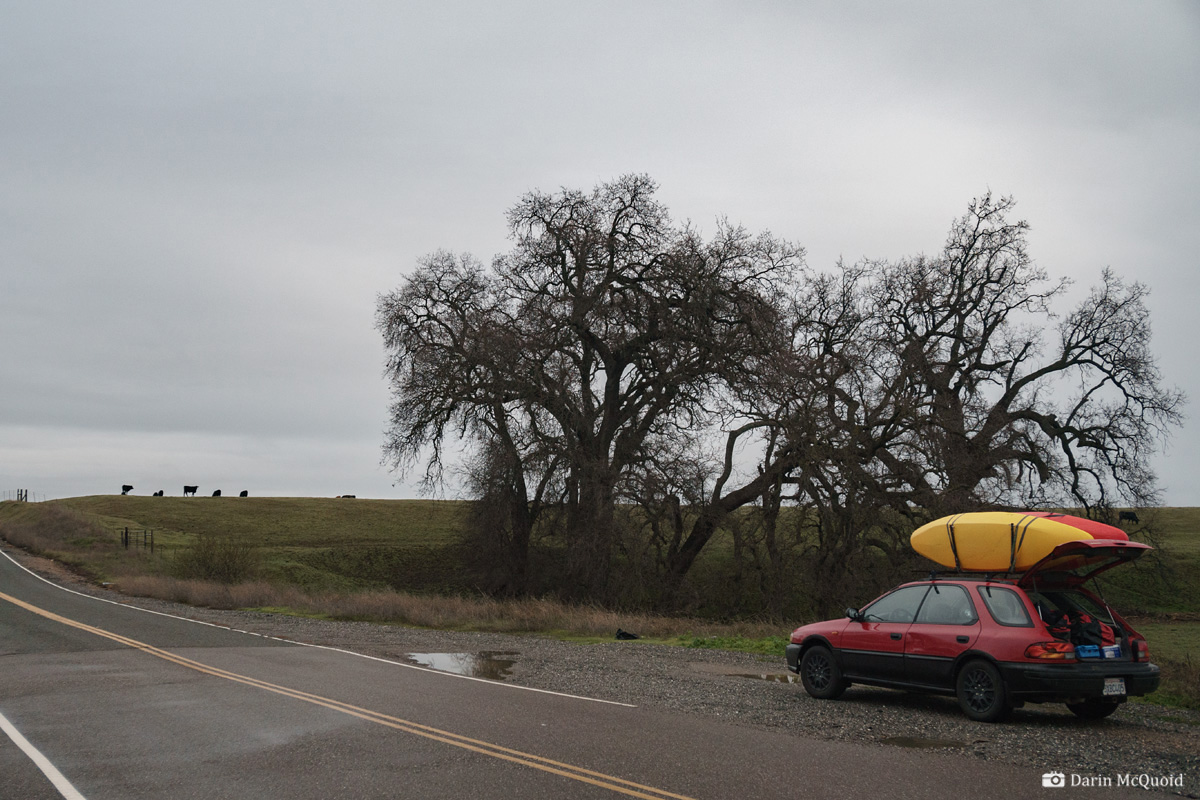 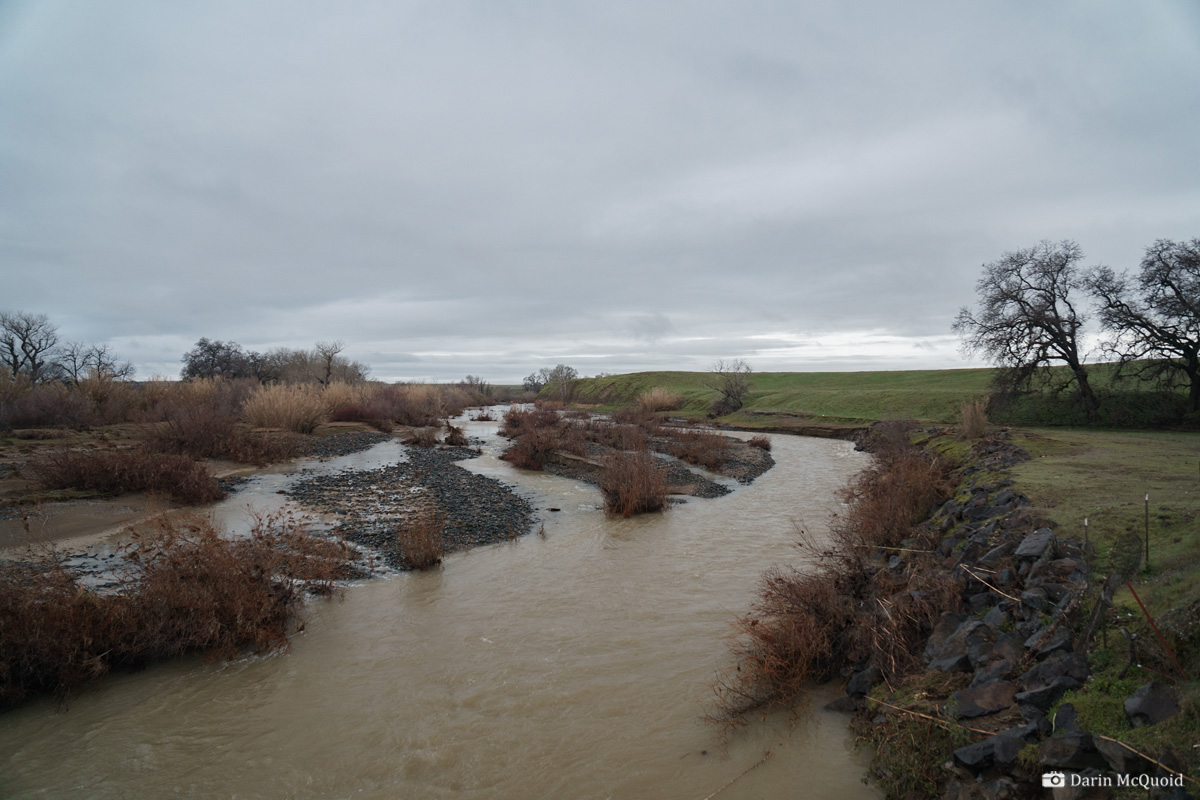 Shuttle takes a bit longer than expected, and we stop for a quick break so there can Blue Steel practice. 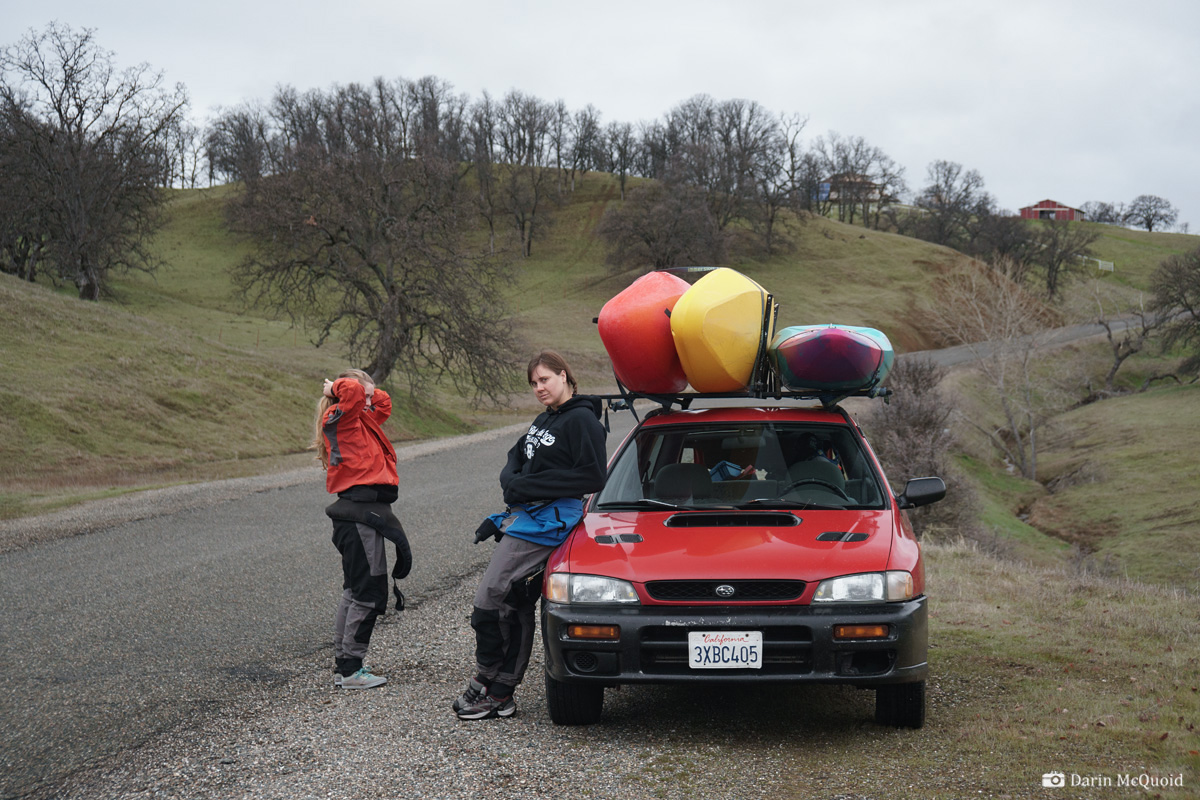 We reach put-in but everything is gated. Eventually we run into the landowners, and they are incredibly friendly people. In 18 years they have not seen anyone kayak Elder Creek and don't mind us putting on here. 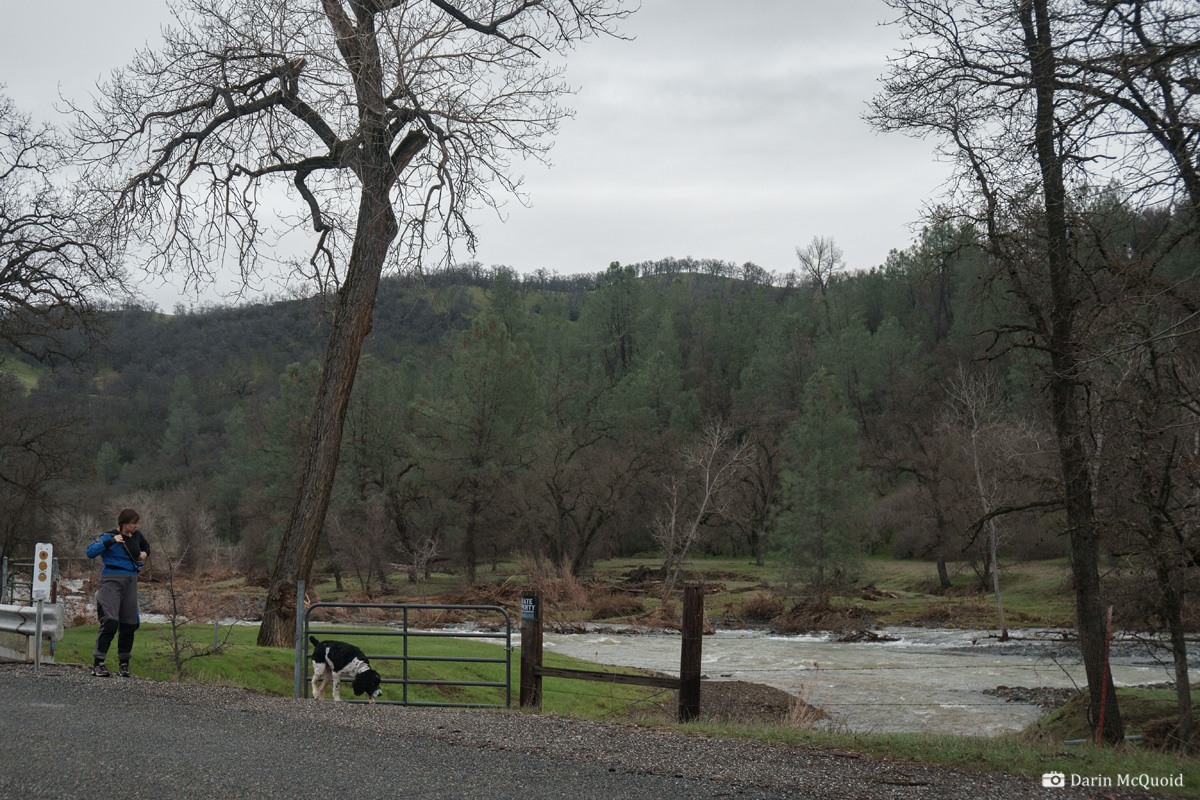 To minimize the hike in, we put on a small tributary to make a probable first descent. 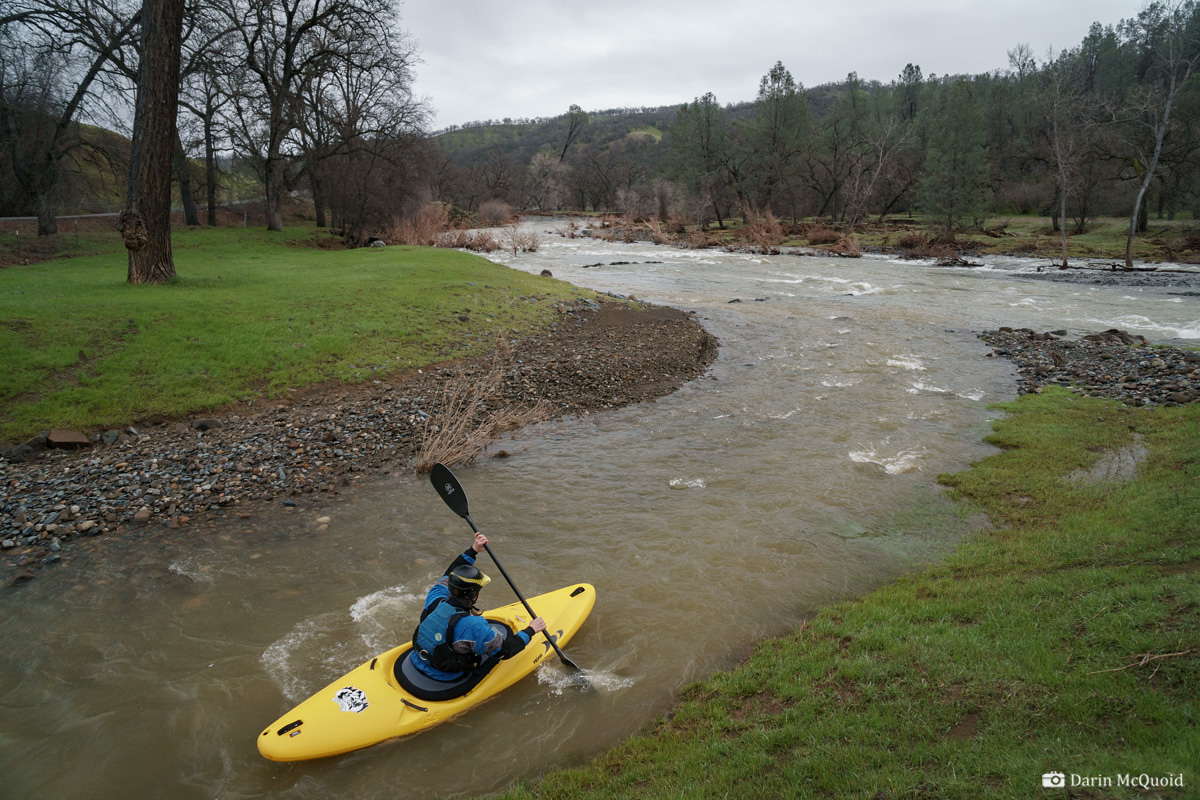 The first mile and a half is gravel bars and braided channels, the largest challenge being trying to find the deepest water and avoid any log jams. At the end of that the river enters a canyon then to our surprise, a bedrock mini gorge. The first rapid is a fun s-turn class III, and suddenly there is a horizon line downstream. Class III in 1971? We take a scout, and it's hard to say if the drop would be easier or harder at higher water. Probably a bit easier as it's shallow. Still, it looks like a solid class IV so we run it.


Ashely Brown scouts the second horizon line of the run. 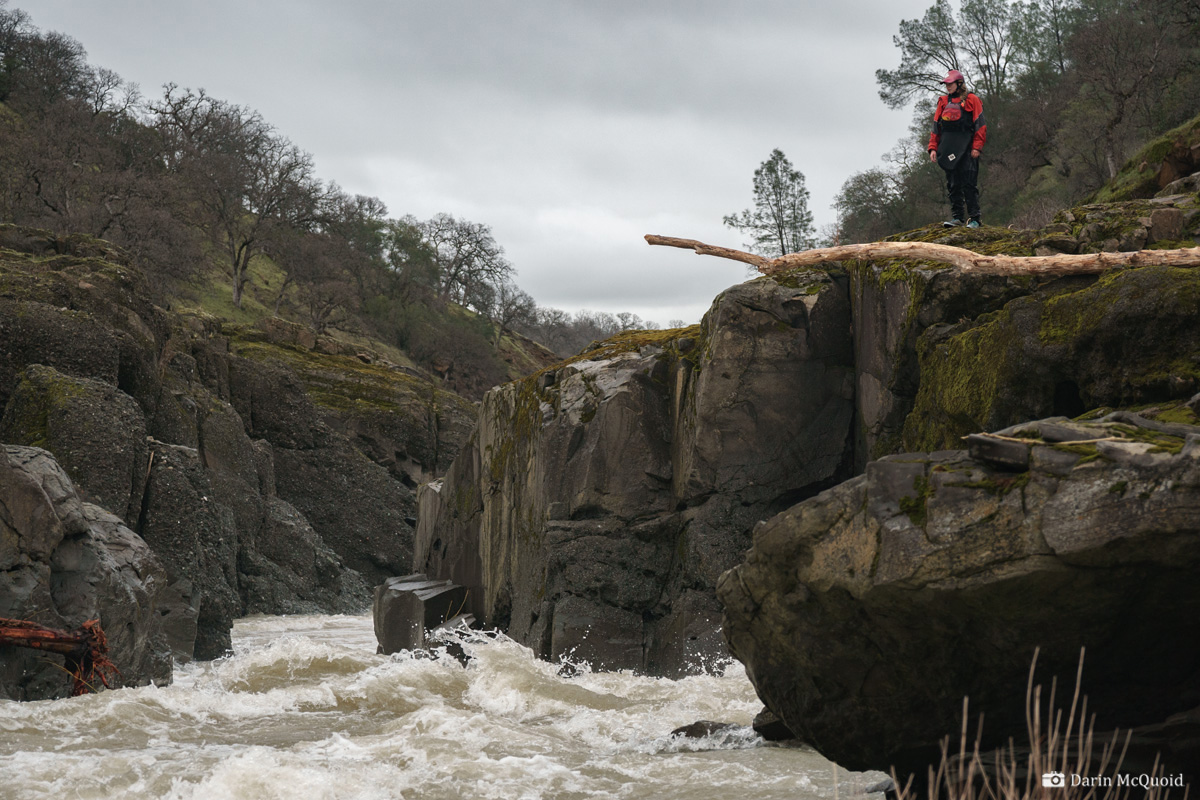 A view of the same from the right bank, the real hazard would be poorly judging your line and ending up on the left side of the main channel. 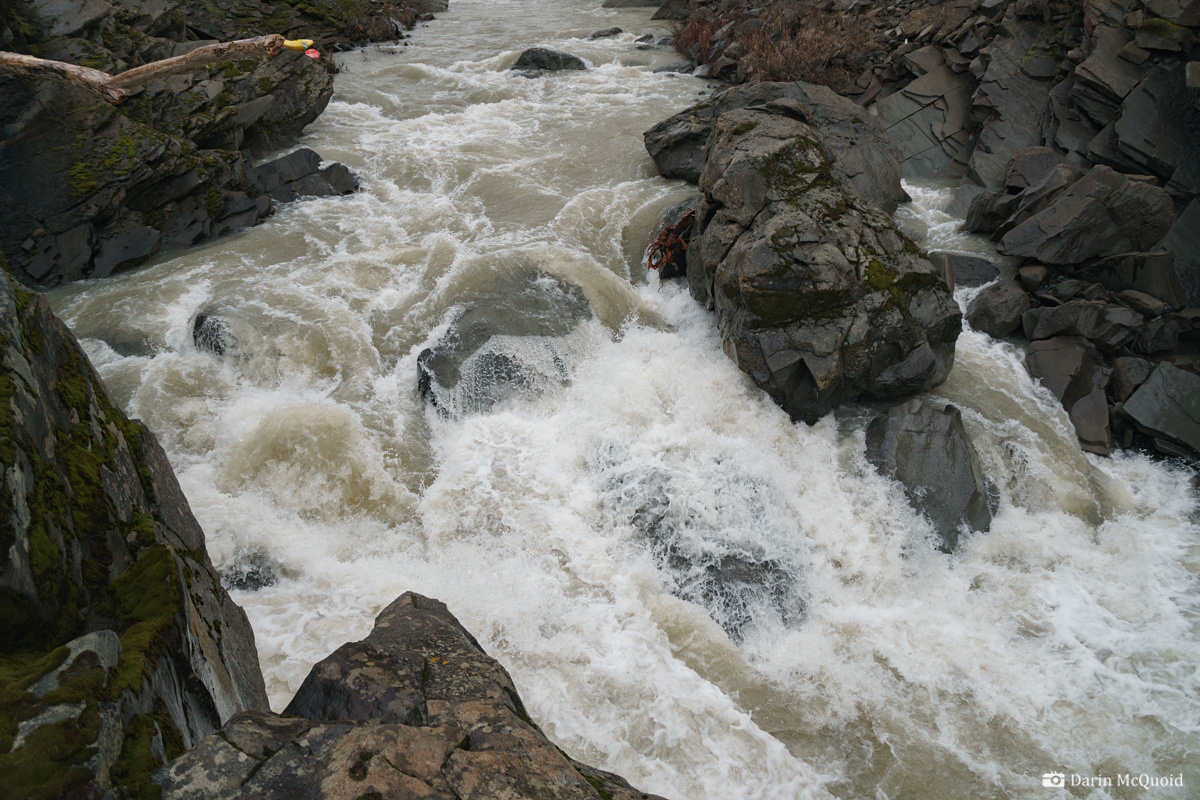 Another look from above where you can see more of the line, and a depressed pocket hole on river right. 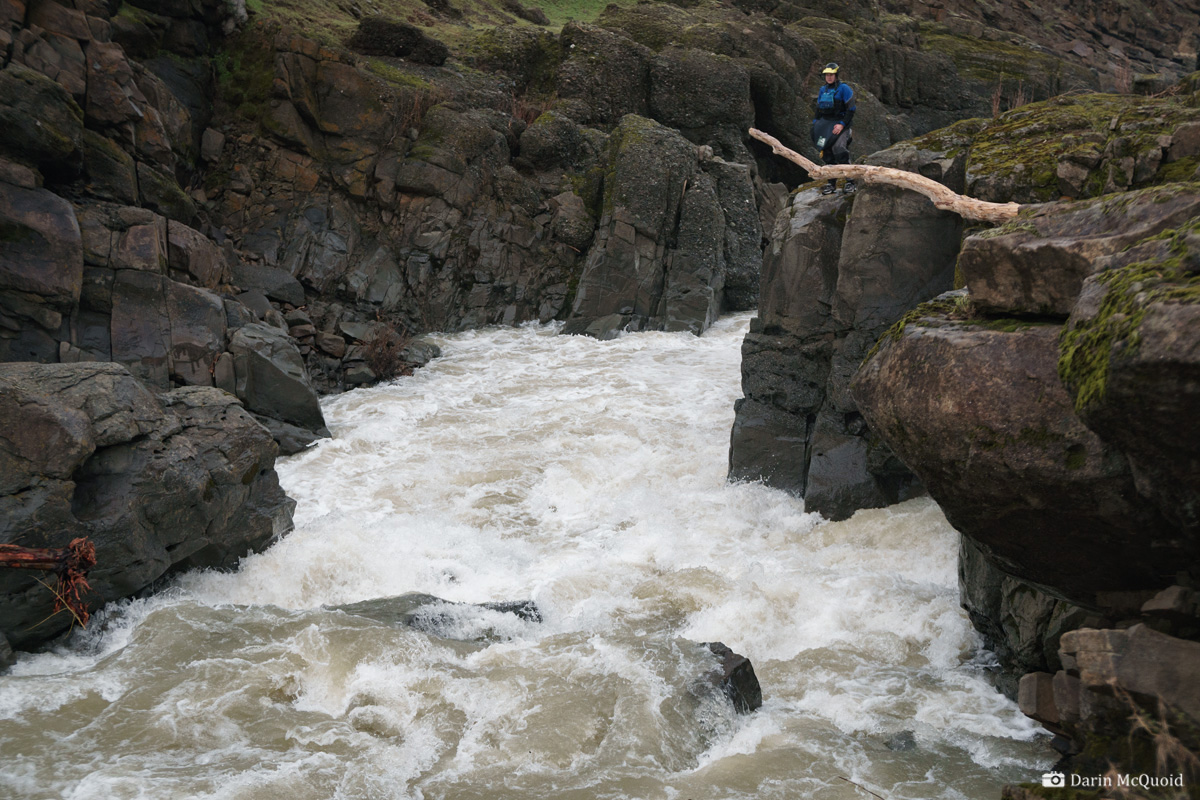 Shannamar Dewey makes the probe effort with no problems. 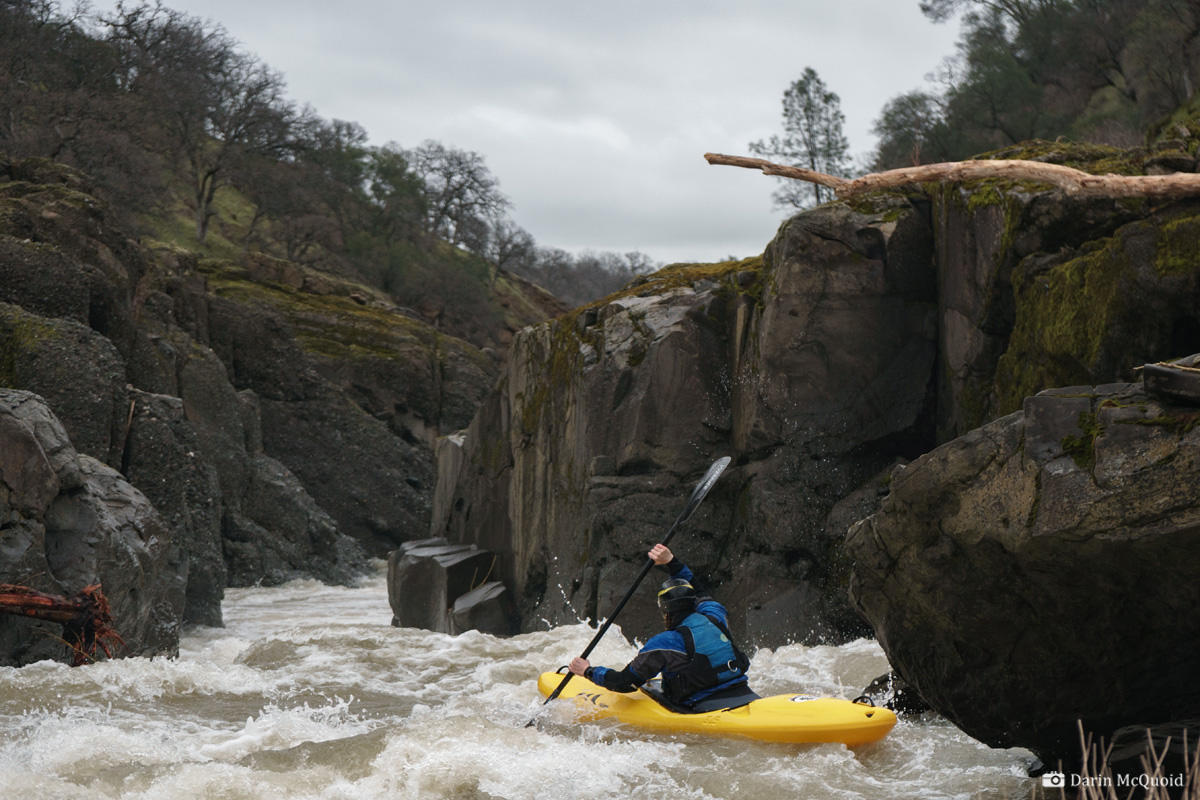 We float fifty yards and then are above a rather significant hhorizon line considering the class of the run. It's a 3-4 foot river wide ledge, we sneak on the left but this thing could get nasty at high flows. The gorge continues downstream with some fun rapids, a pleasant surprise from what we'd expected.


Solid class II-III moves in the final bits of the gorge. Shannamar Dewey and Ashley Brown. 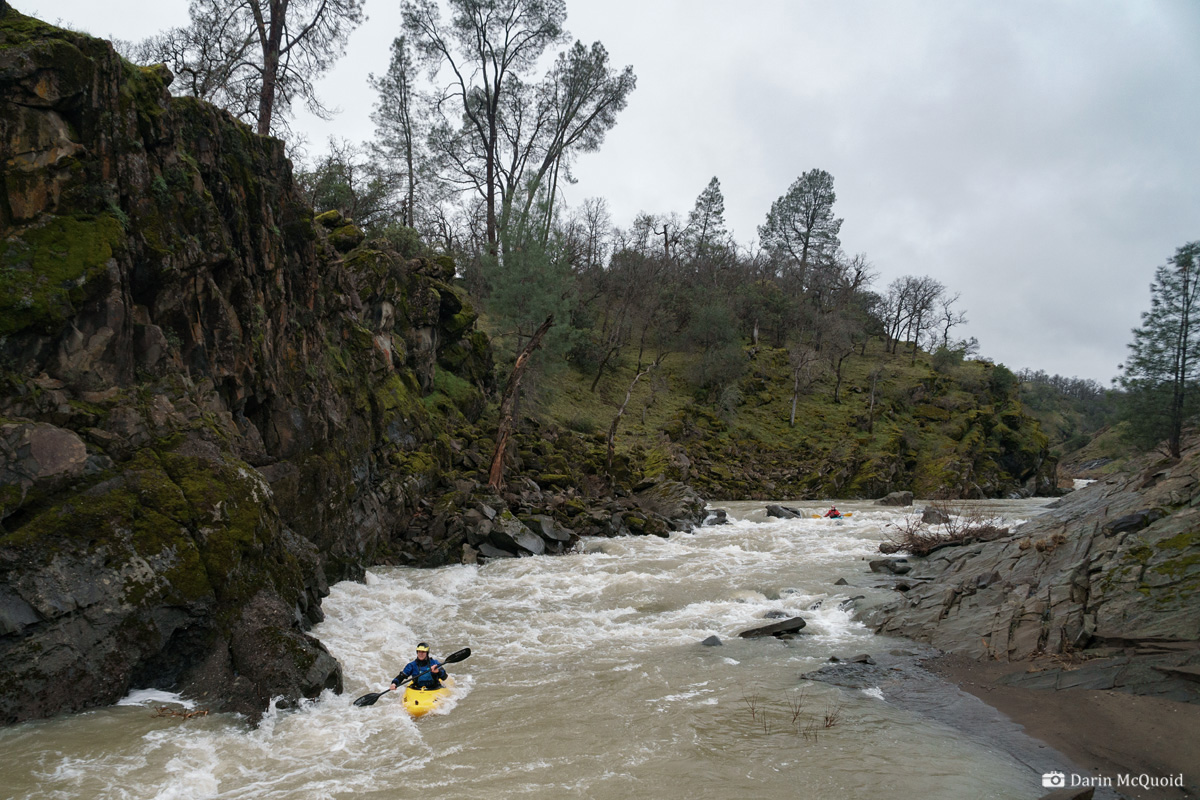 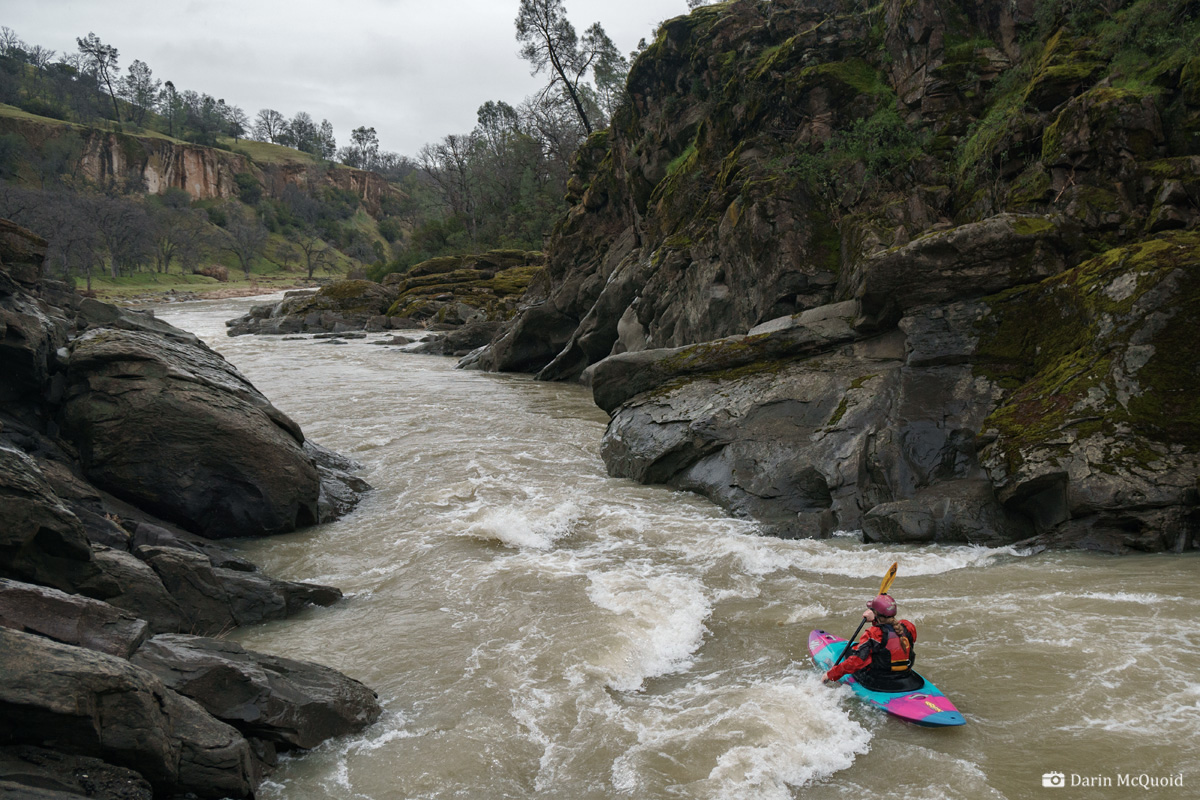 Ashley Brown.The first gorge ends after roughly a mile and a half, or three river miles total. From here we stayed in our kayaks for six miles. It was mostly class II in these miles, yet interesting moves of blind class II around huge boulders, it felt more like western Mexico than California foothills.

Pizza Break as we're through the interesting whitewater around nine miles in. Ouch, eight miles of paddle out! 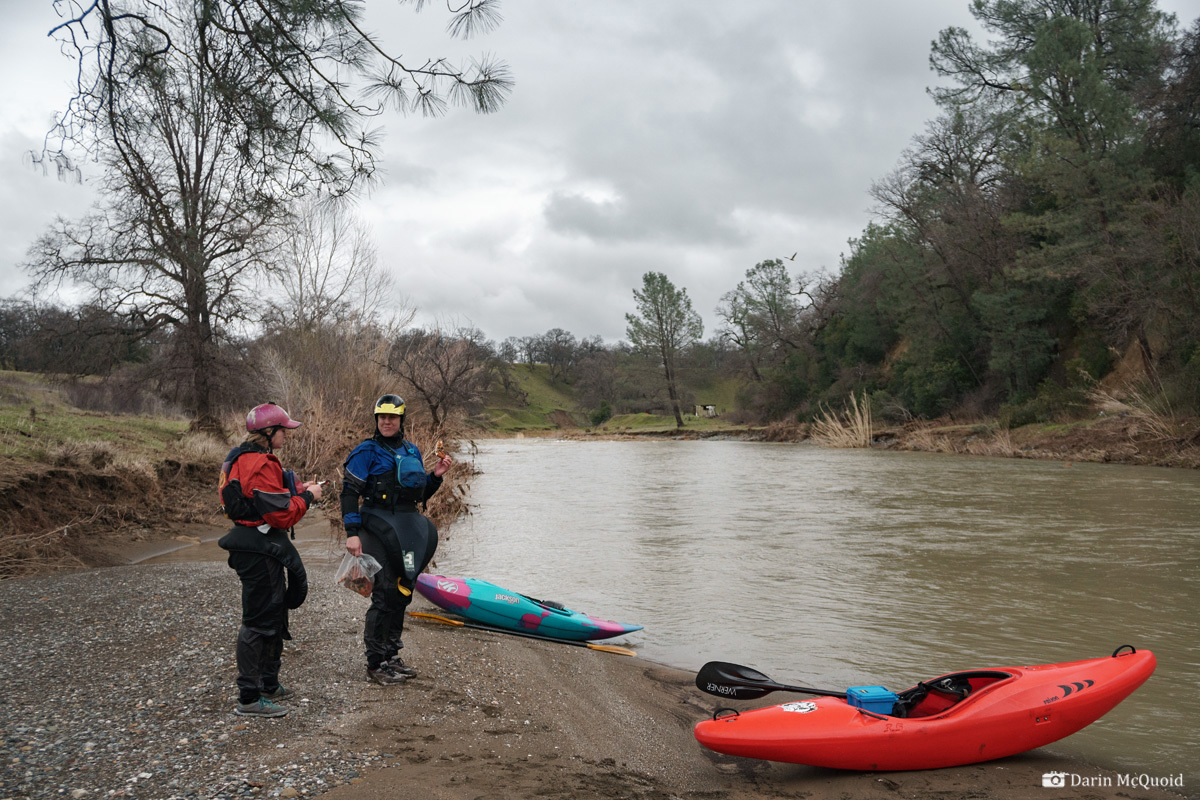 Around mile 10.5 is a city park in Rancho Tehama, which has seen considerable development since the guidebook was written in 1972. We would take off at this park in the future, as the following 6-7 miles is rather painful and considerably less scenic, though we did see some wild boar.


As it happens, Ashley is from Red Bluff, the nearest "metropolitan" area to Elder Creek. We just had to stop and take a photo when we saw the hay bale in the river, because as she said; "this is just what you think kayaking in Red Bluff would be".

On the whole Elder Creek is a very nice II to easy III run if one were to portage part of the first gorge. It has unusually pleasant scenery and interesting rapids, while the length isn't too bad if you take out at Rancho Tehema. We had flows of 600cfs and I'd consider that the minimum, next time I'd be looking for around 1,000cfs and consider 2,000 to be the maximum (although if you walk the first gorge it could be run very, very high). Elder Creek at Lowrey Road.

While doing this write-up I was pleasantly surprised to discover Dick Schwind was kind enough to make his guidebook available to the general public: West Coast River Touring at American Whitewater. It's a worthwhile read and humbling to think that as it was written, many of the roads we take for granted were just being put in.

Note: Make sure you follow the shuttle directions in the link below. If you just throw locations into your phone at take out, Google will take you north on Paskenta Road, which fords a season stream. When Elder Creek is flowing, it will be too high to ford and require some back tracking. Instead make a right onto Dusty Way, or use the map below. 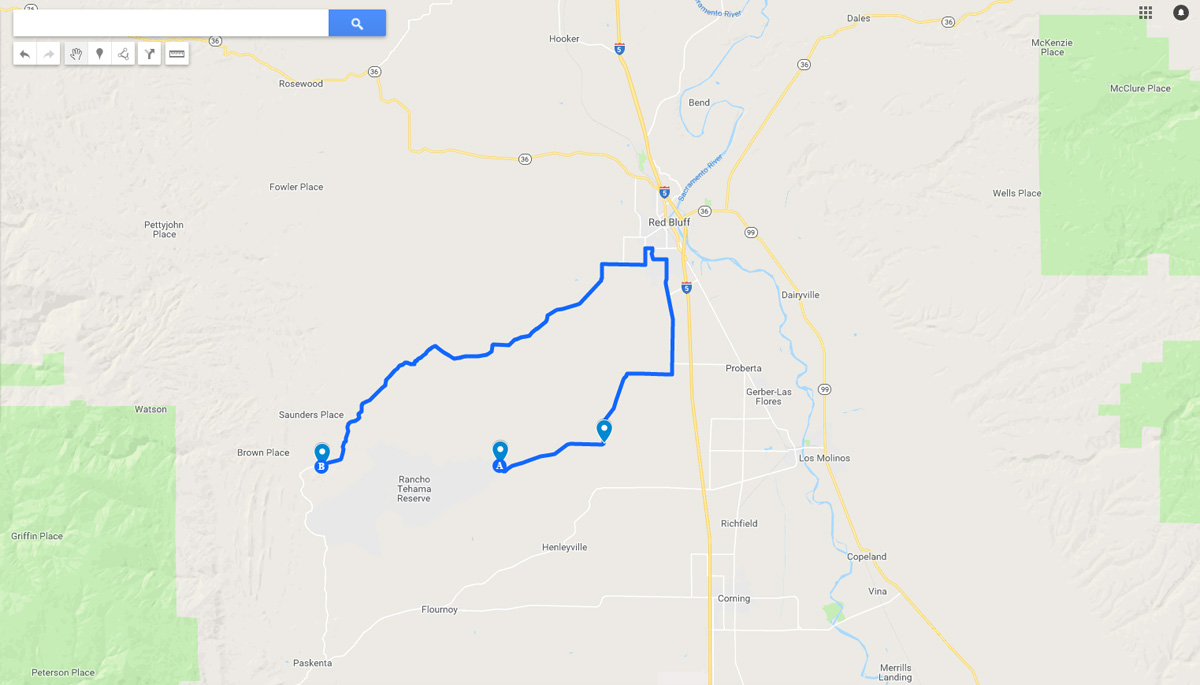