If you havn't checked it out, read day one first.

We had been dreaming of that gorge all night long. Just downstream from our first campsite on the North Fork Mokelumne was the well known second gorge. All we could see from our extended scout the night before was a low angle slide with some steeper spots and several large holes, all told two to three hundred yard long and only one rock in the riverbed. Absolutely incredible. Absolutely made me nervous thinking about it as the day’s warm up rapid.

The first thing we noticed after getting up was the water level. Flows were down over a foot since we had gone to bed the night before. One waterfall was directly below where we took out to sleep, and in the morning it didn’t look nearly as nice as it had the night before.


Boom, and day two starts off with no warm up. Jonas Grunwald. 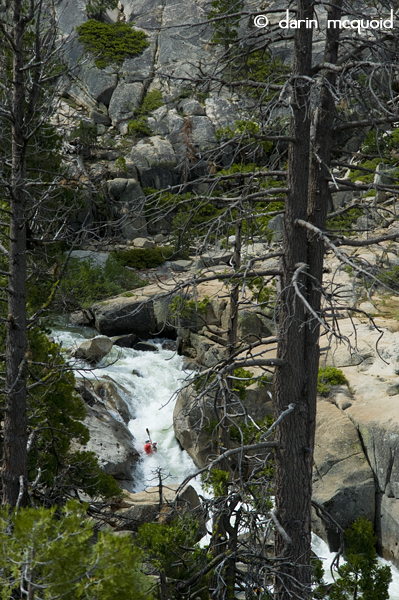 Not wanting to warm up on a folding waterfall followed by sieve on the right and boxed in hole on the left, I tend to opt for a quick warm up by walking down the next rapid. 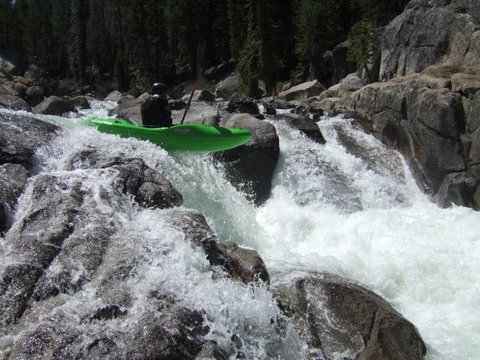 Assuming our overnight loaded boats would help punch through several large holes, we gave the long rapid two thumbs up. Around the corner was a short pool followed by a large horizon line with a rather unsettling rooster tail that was spraying copious amounts of water. Not wanting to stand around I quickly ran one of the most fun rapids of my life, this long slide is just pure fun!


Nate Garcia in one of the most amazing sections of river in the world. 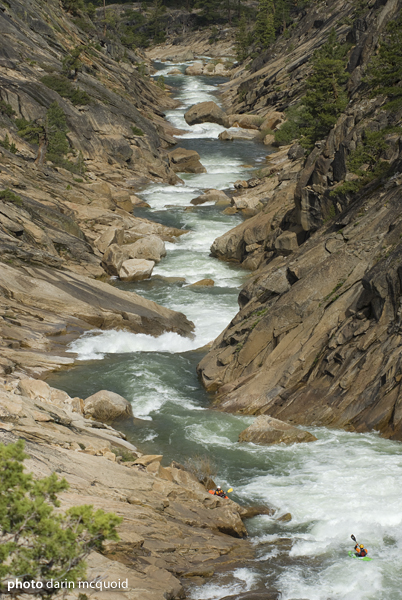 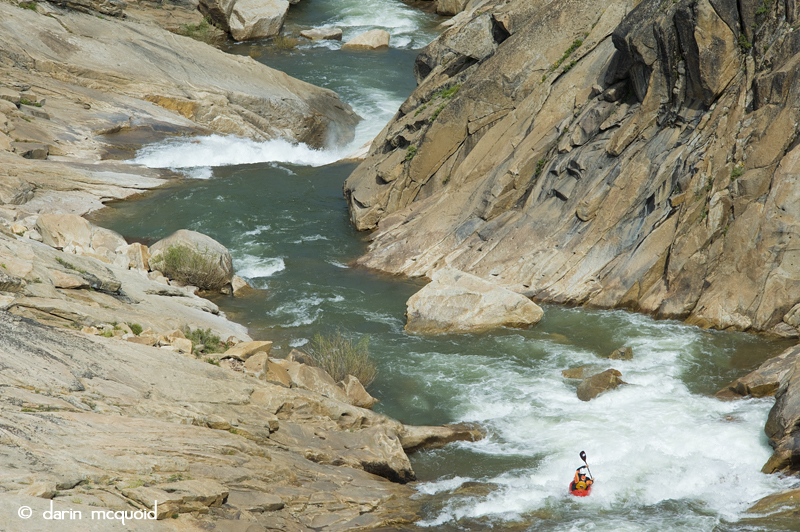 Smiles spread across all our faces after scouting the rooster tail horizon line. After dropping five feet on to a nearly river wide ledge causing the large rooster tail the river slide down beautifully. Thankfully there was a left sneak around the rooster ledge. I’ll stop talking and let pictures do it justice. 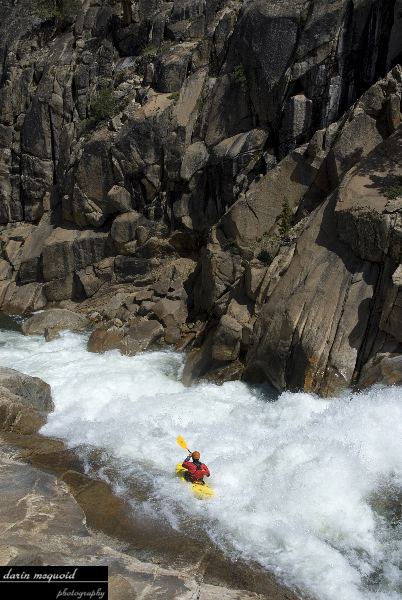 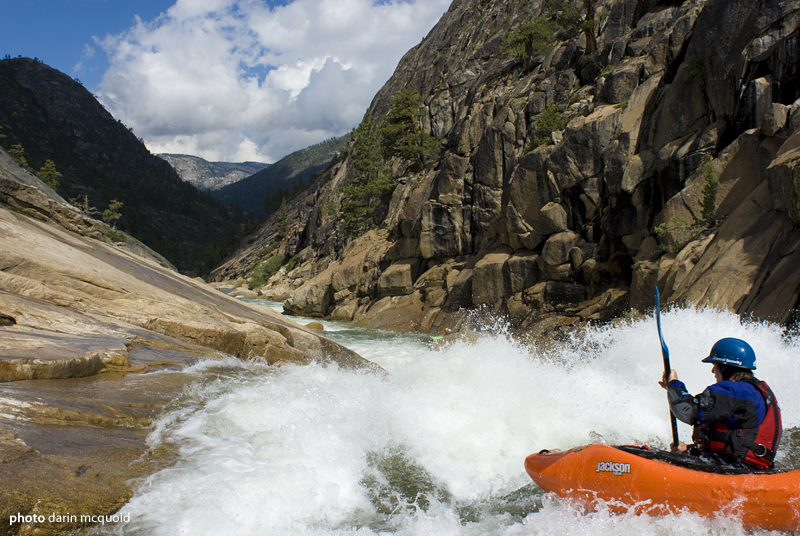 Downstream we had another large horizon line. This time the river went left around a massive boulder and then proceeded into a steep, slanted slide. The entrance was a bit tricky, it started off with a low angle slide and a few holes, then required threading the needle to the right of a large hole, and left of a sieve under the large rock. The line wasn’t really in between these two features so much as it was over a large pillow bouncing off the rock. Prior to 2010 this could only be run at high water due to a log sticking out from the sieve, but it's currently clean and goes well at lower flows too.


Gareth Tate in the entrance of "big boy pants". 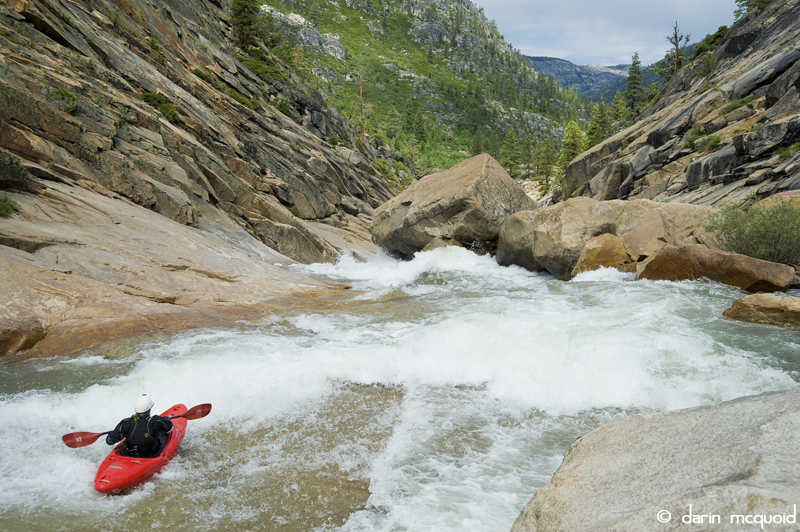 Once again another epic drop on Fantasy Falls, here is Chris Korbulic on the entrance of the same. 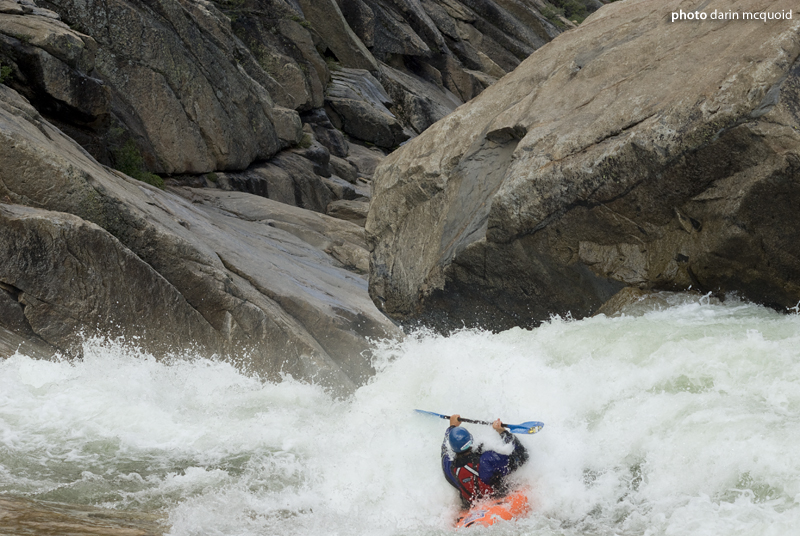 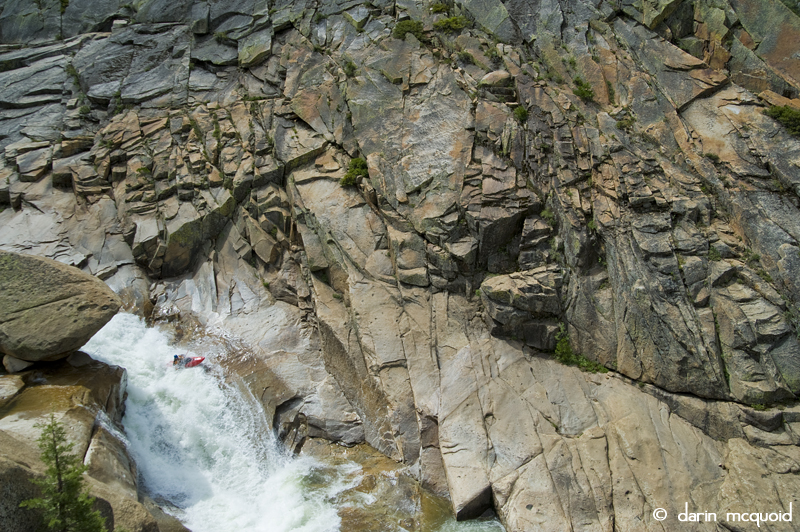 Ledges holes were the line-up for the next series of rapids, and I probed away with a large tail stand in a ledge, prompting Chris and Kevin to scoot left on the largest of the ledge holes. The gorge started to open up and we switched back to making time with more aggressive boat scouting.


This is Chris on one of the many clean bedrock drops downstream of the second gorge. This is also my lens giving up the ghost after eight months of abuse. 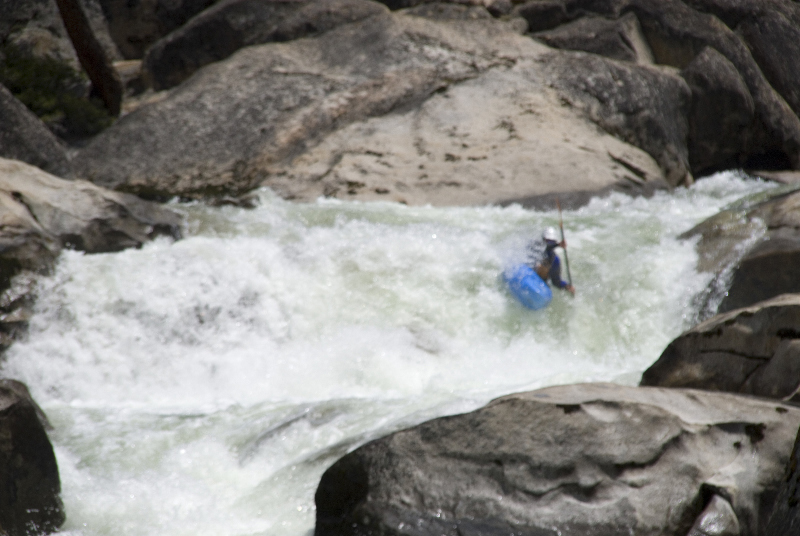 Fantasy Falls is filled with high quality boulder gardens that you never hear about, almost all read and run filled with multi-move goodness and the occasional scout. 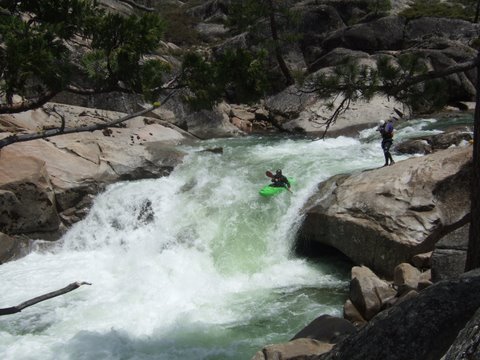 This high-quality classic boof requires climbing quite high uphill onto the rock, a line Chris styles for the shot. 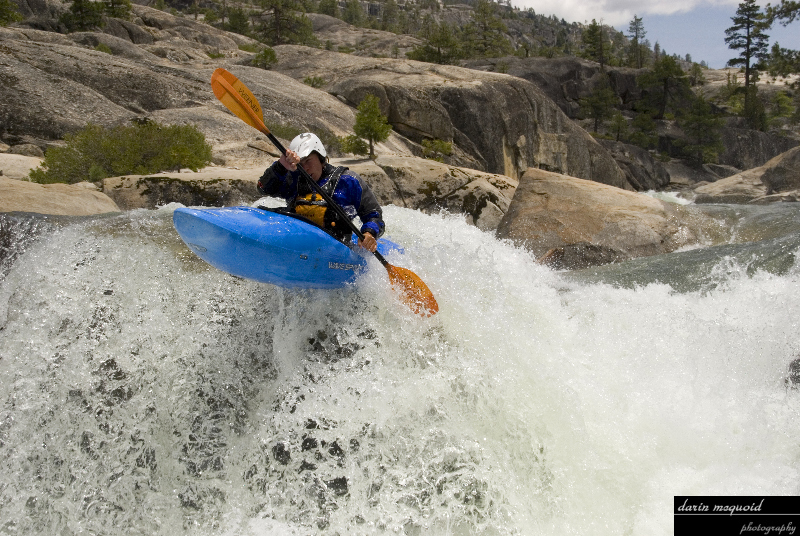 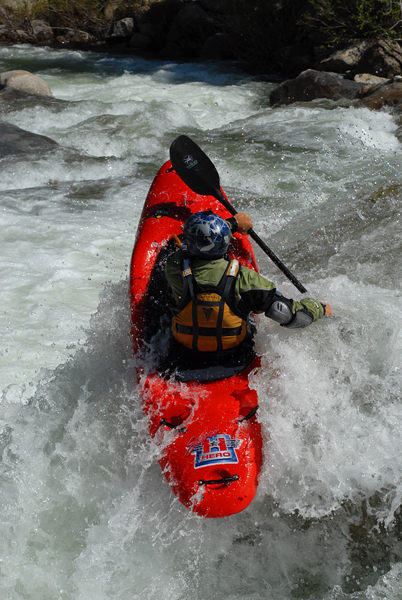 After the boof we quickly portaged a log, deciding to push on until the next scout and take a brake for lunch while scouting.

There was beautiful scenery on the whole run, here is a quick view from our lunch spot. 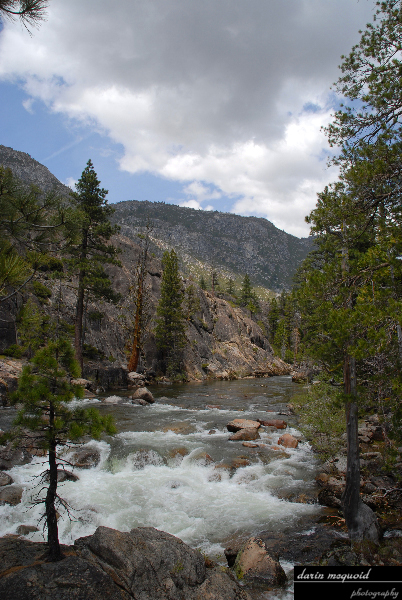 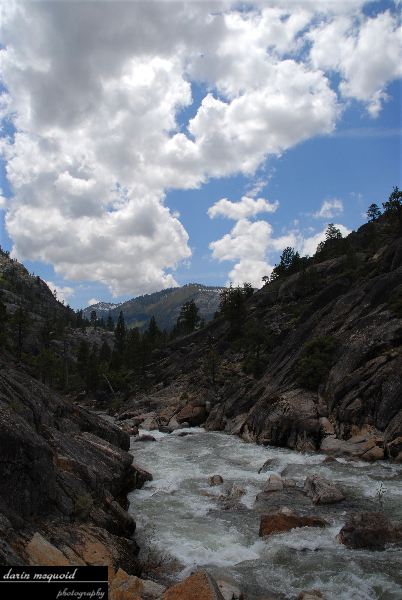 Our goal was get past the third gorge on day two. The infamous third gorge is rarely run, completely boxed in, and has a tempting class IV lead-in. This led to us scouting anything that looked boxed in, eventually getting to a gorge containing the correct number of drops (three) with the bottom one looking very questionable from above.  The right side looked to offer better access for returning to river level, but we had to start off with steep manzanita bushwhacking, followed by passing boats up steep rock ledges until we hit the plateau. Returning to river level we were surprised at the bottom rapid of the gorge, it looked big but not too marginal…

[Returning in 2008 we ran the whole gorge, and at all flows you always have the option of running the first two rapids and portaging the third, Jedi Mind Melt, on the right. Jedi Mind Melt is larger that it looks in the photograph, but surprisingly friendly.] 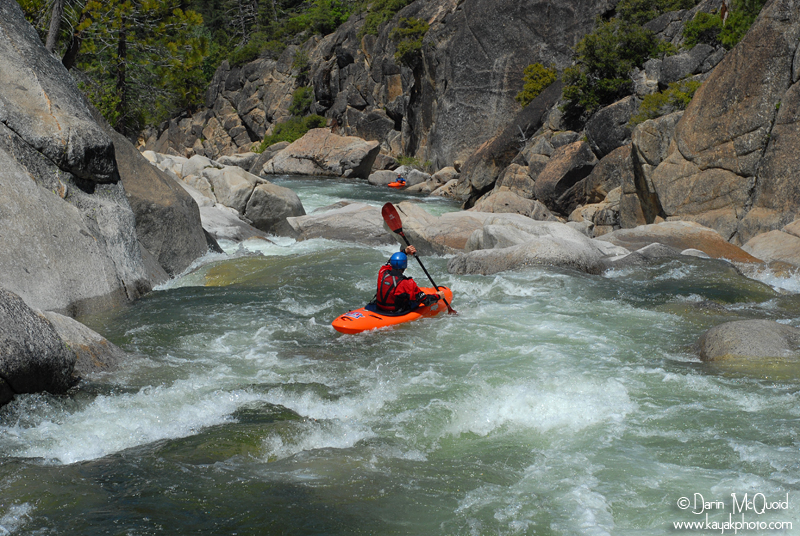 The Second of Three 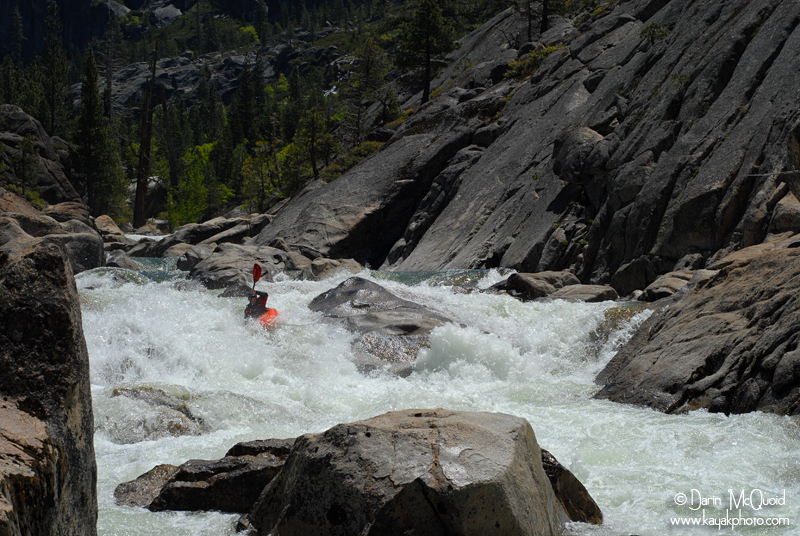 Ryan Knight about to get the Jedi Mind Melt. 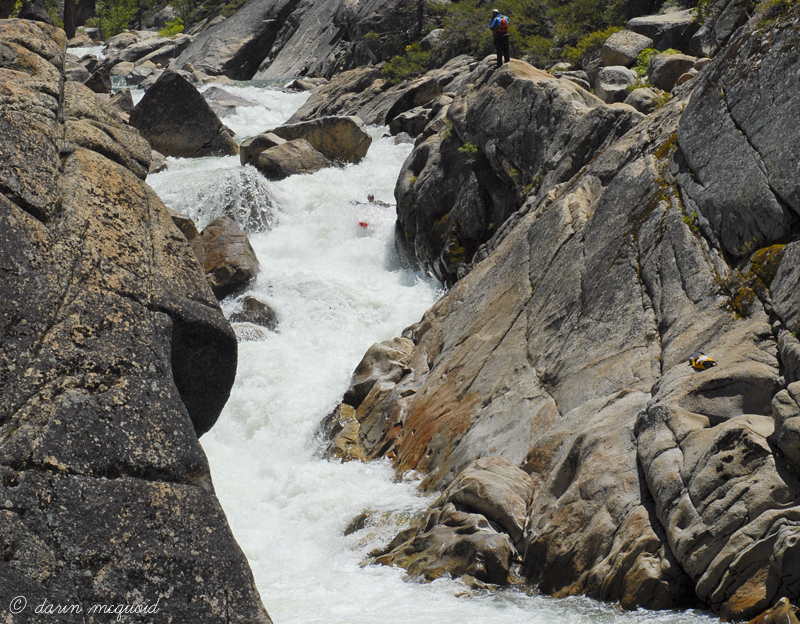 The force is strong with Devin Knight. 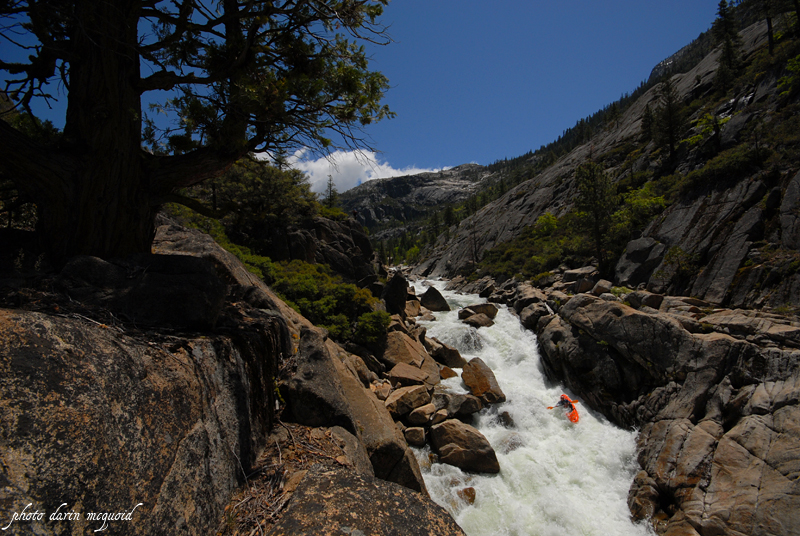 Chris on top of the world. 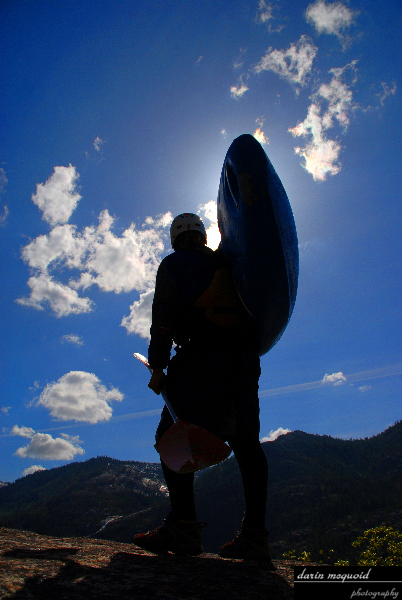 Stoked that we had made it past the third gorge, but feeling like we still hadn’t covered enough ground, we decided to push on. One quick rapid led into a long section of meadow with no gradient but incredible vistas and rapid down river progress. Two or three miles of meadow paddling later we came to another gorge. With the sun dropping we determined it would be in our best interest to camp for the night under a gigantic pine tree. Another afternoon scout revealed a walled out gorge containing several large boulder gardens with hungry holes and big water. This has come to be known as The Rifleman's Gorge.

Kevin marked the water level with a stick before our scout, and by the time we finished scouting the flows had already come up six inches. Over the next two hours of relaxation the river came up an astounding ten inches. I have never seen a river with a daily cycle like this, my guess would be that in two or three hours the river went from roughly 1000cfs to at least 1500cfs. As the sky darkened we headed off to an early bed knowing we had a full day in store for us tomorrow.