It is an expensive 1oz at $350, but still a lot less then an ounce of gold, and you can actually do something with it. This little thing is not only a good viewfinder, it's great; especially for manual focus users. With a manual focus lens and focus peaking on, I prefer the NEX-5N and EVF to the Nikon D700 viewfinder and DK-17M. That's not to say it's better in all situations, but when focus is critical with a shallow depth of field, the focus peaking and or focus magnification are fantastic to have. I'd gladly take this viewfinder over any DX slr. The rear LCD only design was a major problem for me on the NEX-5, because when shooting in high contrast light it was near impossible to see. Problem solved with the EVF. For the most part. The eye cup of the viewfinder is the worst I've used, it doesn't block light well. I often find myself using my hand for extra shade.
It's simple to attach, mounting in a similar fashion as the flash but much easier to turn the screw to tighten it down. Externally there is not much to look at. On one side we have a button for switching from the rear LCD to the EVF, but the FDA-EVS1 has a light sensor that can automatically do the same.

On the other side of the EVF is  a nice simple diopter adjustment. I have pretty bad eyesight, and just like on my D700, if I adjust it all the way to one end of the spectrum it's just right. This is a nice touch on something so small.

After just a few minutes shooting with the EVF I noticed that that its tilting ability is quite handy. Much more so than I would have expected. In the image below I focused on the spider web on the bicycle spoke. This wouldn't have been an easy task with many other cameras, my eyesight isn't that good.


Once again the quality of the EVF is truly outstanding. When coupled with some of my older Nikkor glass and using the manual focus assist I can literally see the difference in quality as the lens is stopped down. This also shows up with focus peaking. With low contrast lenses, focus peaking is not always visible. The Nikkor 28mm f/2 doesn't set off focus peaking at f/2, but it's notorious for low contrast wide open. Stopped down a little and focus peaking works well, so this is obviously a shortcoming of the lens not the viewfinder.
The live histogram displays in the EVF making exposure easy to set, and other options can be toggled on and off just like the rear LCD screen.

Once the EVS is attached I find that I don't use the rear LCD, unless I need to spend extensive time in the menu system. The rear LCD resolution is good, but the FDA-EV1S is notably better. I'd say this is the best money you can spend on your NEX-5N. It's half the cost, but it makes it twice the camera. The serious downside to the EVF is that it takes up the only acessory port on the NEX-5N. This is more of an issue with the NEX-5N than the EVF, and it limits what you can do, no EVF and flash use at the same time, and more importantly, no use of the EVF with the external microphone.

Cons:
Expensive
Can't use external microphone or flash at the same time
Fragile

Eye piece terrible at blocking light from the side

The short story is that after six months, when I pick up my Nikon D700 I miss the FDAEV1S. It's that good. The downside is that it is about as durable as its weight would indicate. In my field of use for the camera (expedition kayaking) the viewfinder lasted under a year in one piece. It still works, minus the light sensor. Shame on Sony, a duct-tape fashioned eye piece actually blocks light better than the supplied rubber piece.


Despite how it looks, it's still functional. 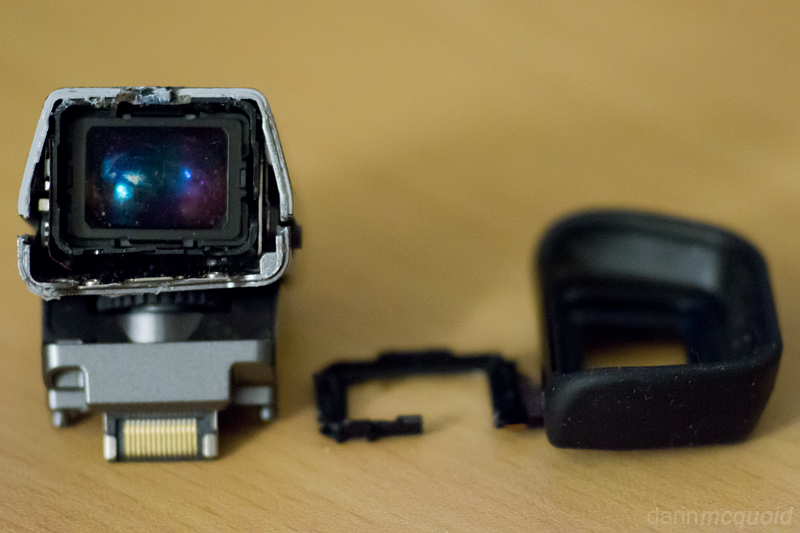