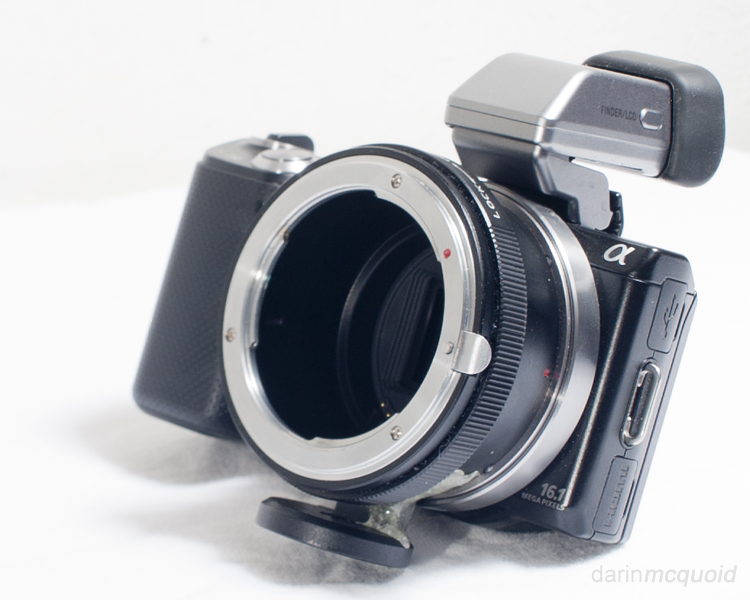 $293 to $17. Quite a price range for similar items.There isn't too much to a Nikon to NEX adapter. It's basically just an extension tube with two a Nikon F mount on the front and Sony E on the rear.. Due to the lack of an aperture ring on G lenses, a suitable adapter also needs to a ring to control the aperture lever on the rear of the lens. I chose this particular one because of the price and inclusion of a tripod mount. The Sony NEX are quite lacking in this area, and I wouldn't want to throw my Nikkor 70-300VR on my NEX-5N with just the body attached to a tripod.
So how does this particular $40 model stack up? To be honest not particularly well. The tripod mount is only attached by two tiny screws which constantly come loose. You can see my addition of epoxy to hold them in place and help make the tiny tripod mount a little more solid. The next thing a lens adapter needs to do well is form a firm connection from the lens to the camera. Unfortunately the Fotodiox falls a bit short in that category too, it's a bit loose and both mounts have some play.
You might think that would be it, but it has one more issue! If you use an AI or AI-S lens and want to use the aperture ring on the lens, the release button blocks full rotation of the aperture ring. Why would you want to use the aperture ring on the lens?  With no markings on the adapter ring for aperture control, it's also near impossible to tell what the aperture is adjusted to. You can still open the lens all the way, either via the aperture ring on the adapter (but you won't know your exact aperture) or you can pull the release lever back and move the lens aperture ring to its widest setting. An annoying oversight in the design of this adapter.
In short, it gets the job done, but is not particularly well designed or machined, but not particularly expensive either.


Note: after considerable use I noticed a massive flaw in the Fotodiox adapter. The release lever for the Nikon lens lets in light when a lens is attached. Bad news! After one year the lens release button broke rendering this adapter useless.