Long ago, in a time when there was water in the hills Jon and I ran Hayfork Creek. To be more exact I think it was late May. We met up at Jon's house in Redding and got a fairly early start, arriving at the put-in around noon. We dined on a fine meal of canned chicken while it rained outside.
We got on the water pretty quickly, and the first four or five miles flew by with lots of moving water and small rapids. The weather was dismal, on and off rain, and a small amount of sleet and snow. Eventually we got to the first mini-gorge and flew through it without scouting, and continued on through boogie water for a mile or more.
Soon enough we were out of our boats and scouting in a walled in gorge. Scouting in this lead in rapid involved climbing up a slightly sketchy cliff, just to reveal a partially seen rapid and an eddy on river left. Back in our boats the rapid proved easier than anticipated and we were in the eddy. This section proved to have a good gradient with nice large rapids, many must run, all rapids in the IV-V range. Due to bad weather no pictures were being taken, and we managed to bout scout most the drops with one more scout that I remember. The river starts to open up again and a large rapid shows up. We eddied on river right and Jon took off into the poison oak to scout. I refrained from the bush of nightmares and could only see a large pour-over hole, followed by a huge boxed in, possibly terminal hole, and an inability to see beyond the big hole. I got back in my boat and ferried to river left through some brush and got out to scout. This side revealed a line down the left side involving a tricky must make boof to the left move over the pour over hole, then a few smaller drops on the left and a large central hole at the bottom. Jon ferried over and we talked about it. Jon was debating walking something I felt great about for one of the only times I can remember. I opted to probe and nailed my line with a strong boof followed by rock and hole dodging down the left. Jon was up next, and while I got out to set safety the sun came out and I got these three shots. You can just barley see Jon in this one, he is landing the boof over the hole at the top. You can barley see his paddle in the center. 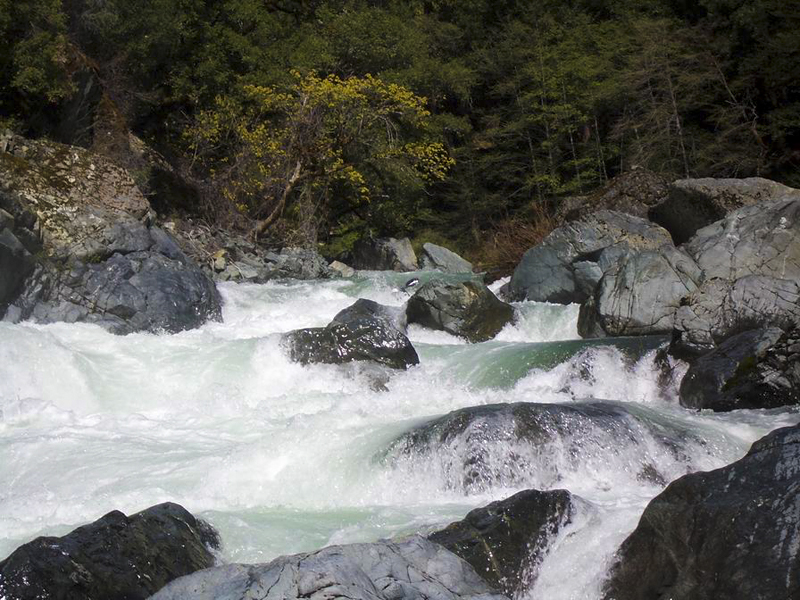 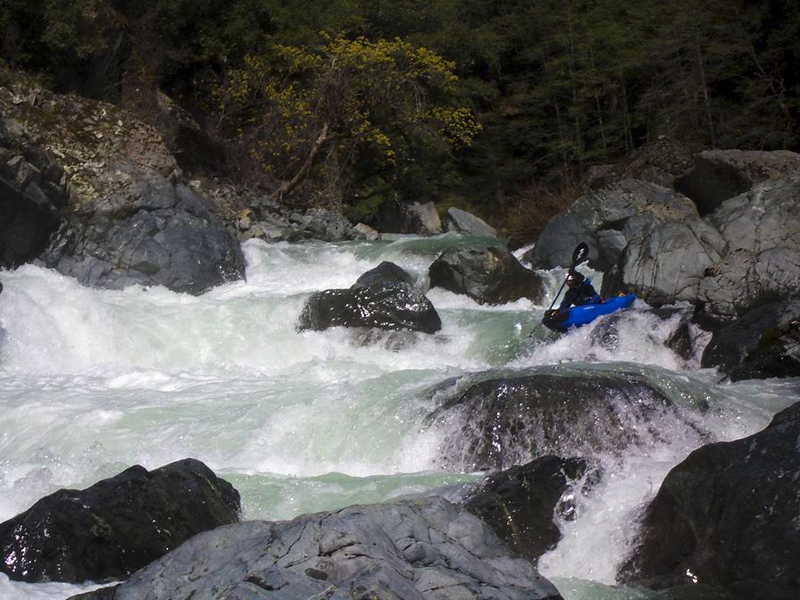 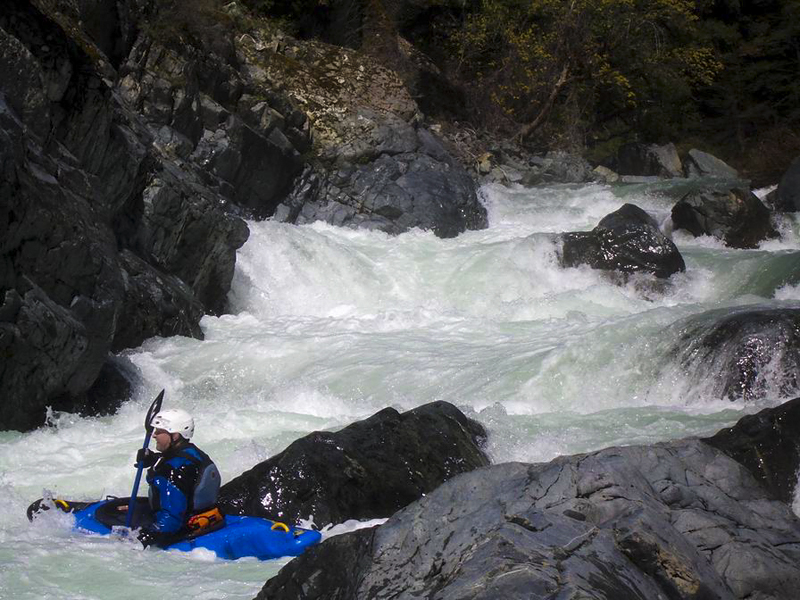 After this large rapid the gradient eased off for a while and we pondered the idea of possibly being done with both canyons. There were a few class IV rapids scattered about in the next few miles, then all the sudden it gorged up again. This gorge is the largest in the run, and culminates with the portage "Giff Falls".  California Creeks also reports the rapid after Giff Falls to be a portage as well. Somewhere in this section Jon led down a large IV+, exiting right. I was following and got pushed left but figured no big deal as there was a nice 4' wide 3' high ledge between two large rocks. I gave it a light boof going over to find my bow pinned under a partially submerged log about 4' out from the drop. To my left was a rock about 1' out of the water that was holding the log in place. After a brief consideration of getting out of my boat while it was upright, I grabbed onto the rock and found solid hand holds and managed to pull myself up over the log and rock while still in my boat. Whew, I was glad when that one was over. We continued to bomb down many large rapids, stopping to scout one hard and serious V filled with sieves. We both ran down the right, although there also appeared to be a line down the left. Our next scout revealed a initial ledge drop to moving water to a large drop between a huge rock and the wall, and angled at the wall. We couldn't get a good view from the scout, and Jon probed, his line looking predictable until the 8' drop at the bottom, which caused him to tail stand halfway down, and roll while flushing out of the rapid disappearing out of view behind the large rock. I thought the tail stand was odd and hopped in my boat, going for the drop with lots of speed and forward momentum. I too caught an unintentional tail stand midway down the drop to proceed into a large lateral hole that rolled me. Fairly soon after this drop Jon led a ledge that he signaled to be sticky, and this proved to be the ledge hole that someone swam out of in Holbek & Stanleys report. So next up was Giff Falls, we eddied right, and it definitely had a line at this flow (1000est). It was a 8' waterfall into a sieve filled mess, but it had a nice little boof that if done with minimal forward momentum would land you in water flushing out. Jon and I both ran it fine, enjoying our boof-o-matic boats (CFS and Hukka) for the low speed boof. The next rapid is just back to class IV and didn't warrant a scout. Many miles of moving water and small rapids got us to the takeout about 1/2 hour before dark. This run is great, it's only drawback is the long length of the run, and just how far it is in the middle of nowhere. Its quite a drive to get to Hayfork but worth it. Probably because of our fows, when compared to similar rated runs in  The Best Whitewater in California,  Hayfork seemed a decent amount harder than similar rated runs like the SF Salmon, Salmon, NF Yuba, BRG ect.


The bridge "gauge" at takeout showing the water level for our run. 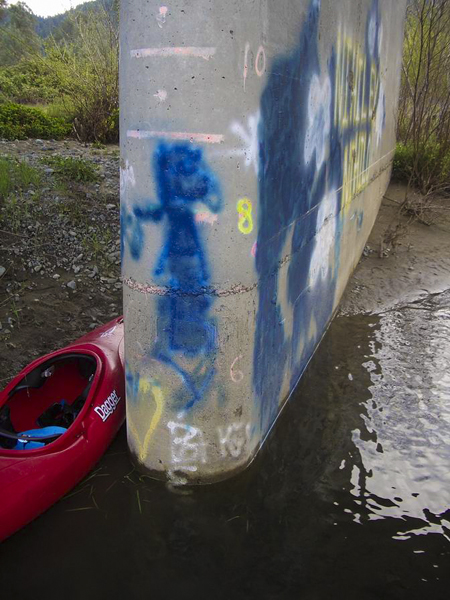