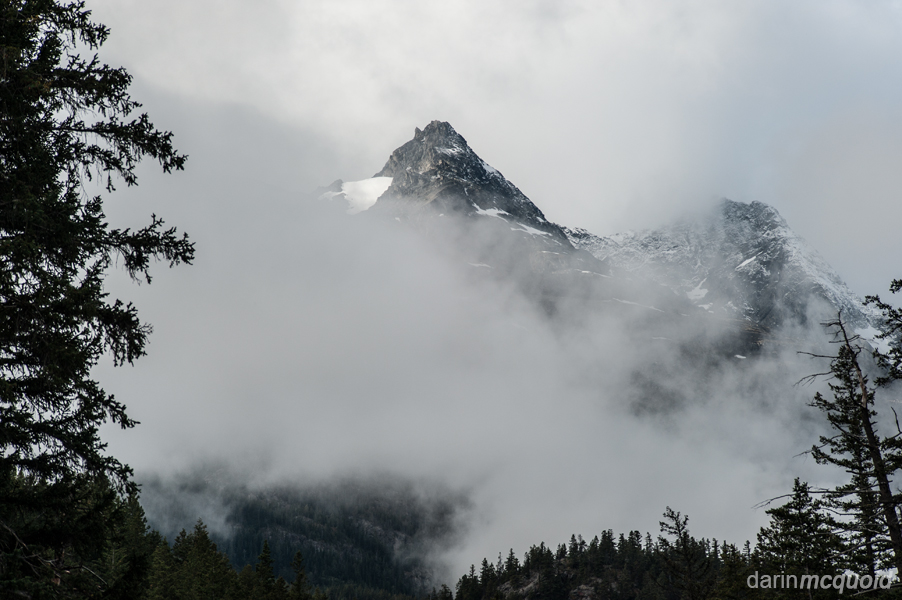 We woke from a damp night and got the campfire going while fog slowly lifted. Drying all our gear took a while, but once it was done we launched into the water at ten-thirty. 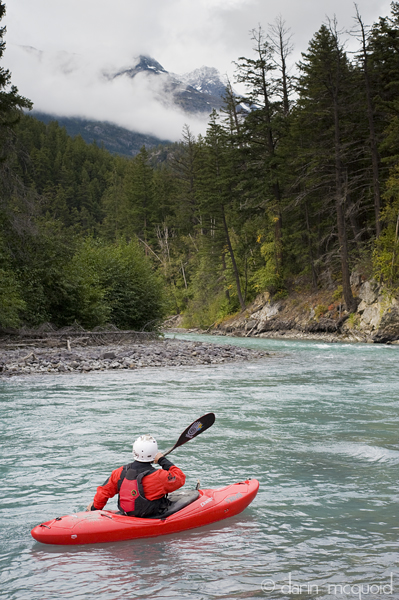 Stunning scenery continued, with glaciers and ice fields peeking out through the clouds from time to time. We hadn't made as much progress on the fist day as we'd anticipated, and there was quite a bit of scenic flatwater before we reached the first IV+ that marks the start of the whitewater. 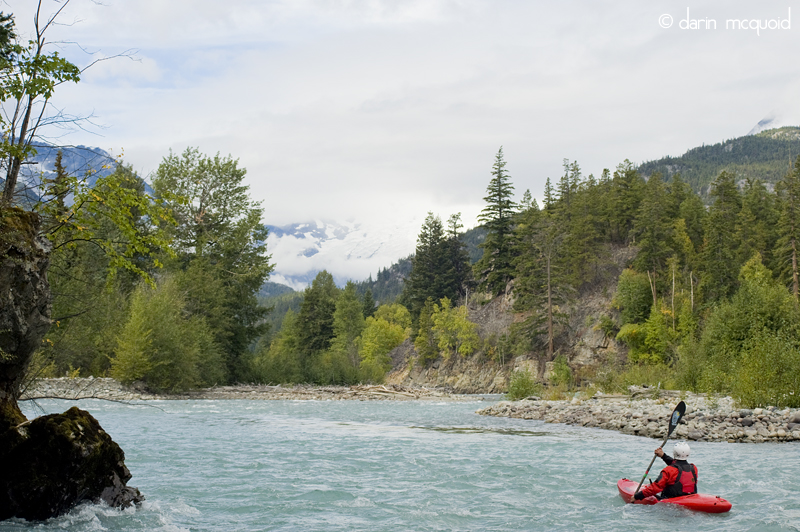 The first IV+ boulder garden was quite obvious from the top as we boat scouted into it. Time for some whitewater! Soon after the gradient picked up and fun rapids were stacked quite nicely. At our water level this section was astonishingly similar to the Bottom Nine on California's Middle Kings.


Charlie Center in one of the entrance rapids of the Grand Gorge. 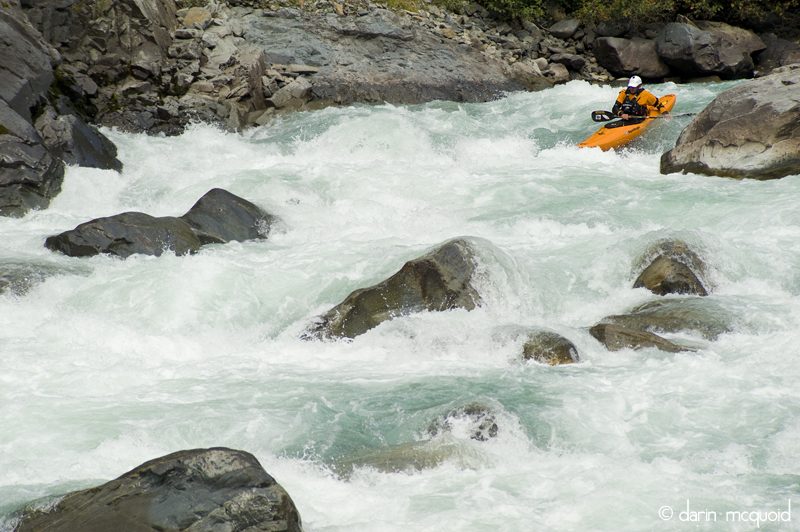 Much like the Bottom Nine, there is not too much to say about individual rapids in the Grand Gorge, it's full of boulder gardens stacked on top of each other, with just enough recovery room in-between. 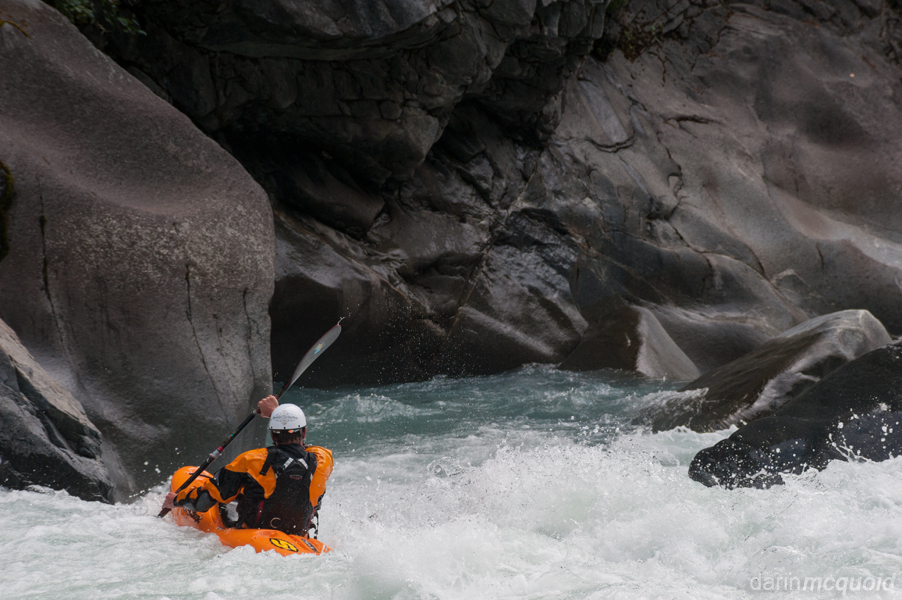 There were some very classy moves in the rapids, hole dodging and tough boofs. Jonas Grunwald. 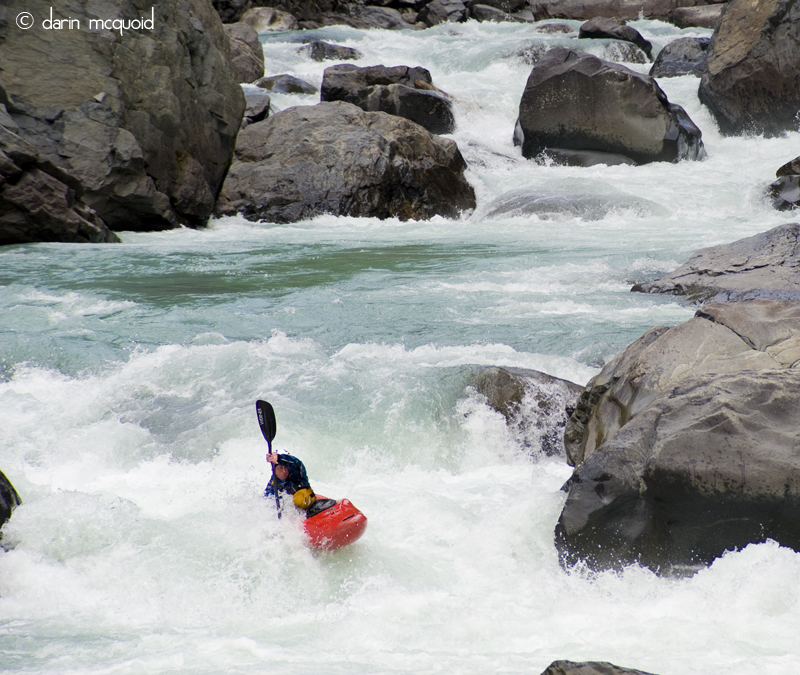 Just as the Grand Gorge got steep, a team member missed a crucial eddy and washed down around a blind corner. From above all we could see was the potential for a big hole, so we charged out of our kayaks and ran down shore with throw ropes. They had surfed a big hole but flushed out and ran the rest of the rapid in borderline control, but it all worked out in the end. Which was good, because otherwise I would probably have portaged this rapid. The top hole looked mean but the lead in was fast, letting us gain key momentum to blast through the hydraulic. 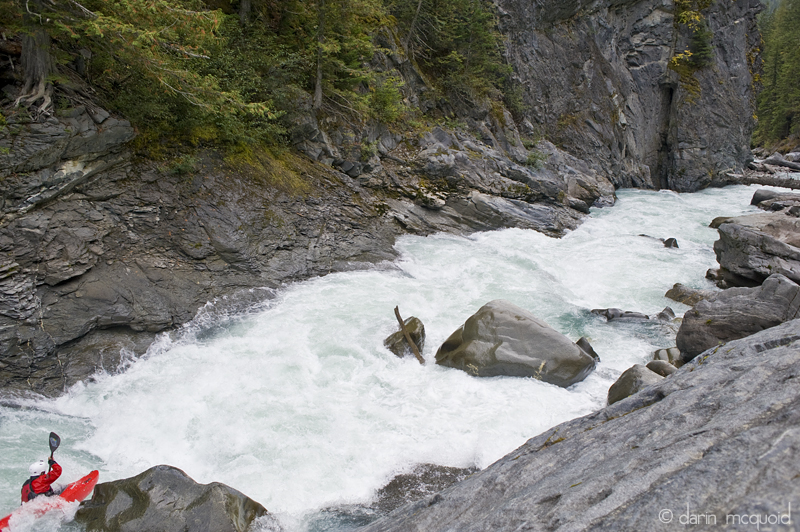 Jonas Grunewald powers in with a good line. 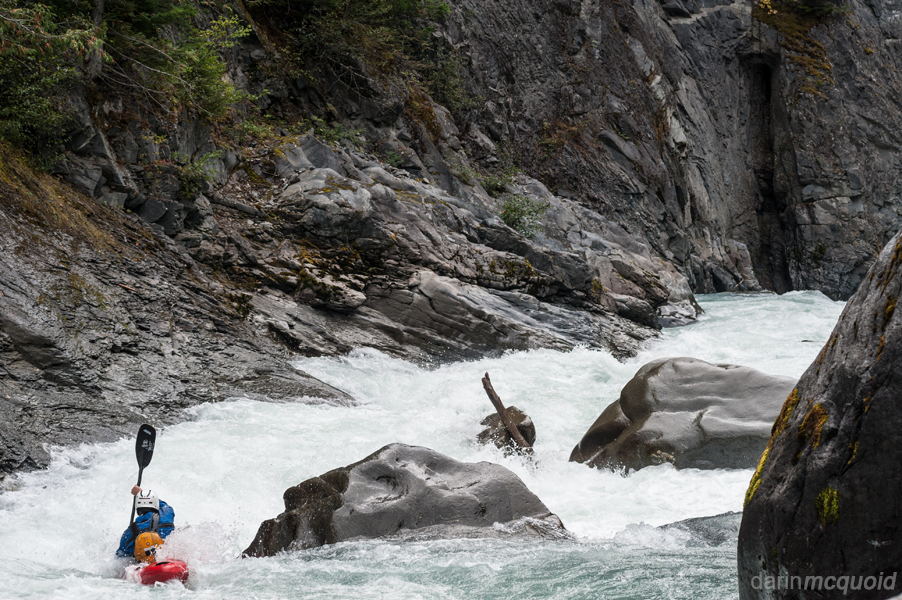 The gradient continued downstream. The entry rapids had been the perfect warm up and we were all getting in the groove, boat scouting and routing through some nice big rapids. With aggressive eddy hopping we had no problems making quick time of the next several miles, relishing the whitewater until the canyon opened up a bit before pinching down to the "Birthday Gorge". The Birthday Gorge is one long rapid, trapped in a tight mini-gorge. The largest hazard is a boily eddy pocket with a bit of undercut on the bottom left, just above a narrow pinch in the river. 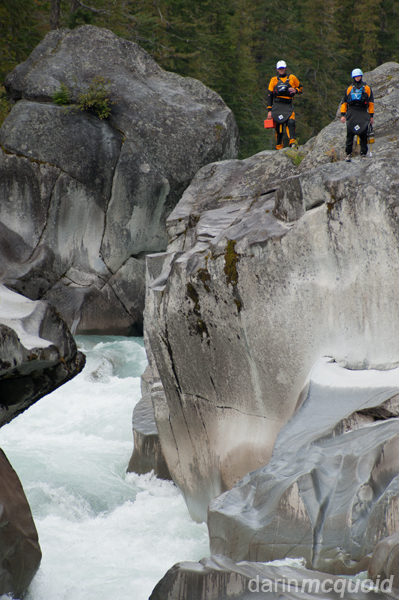 Jonas Grunwald probes down first half of the Birthday Gorge. 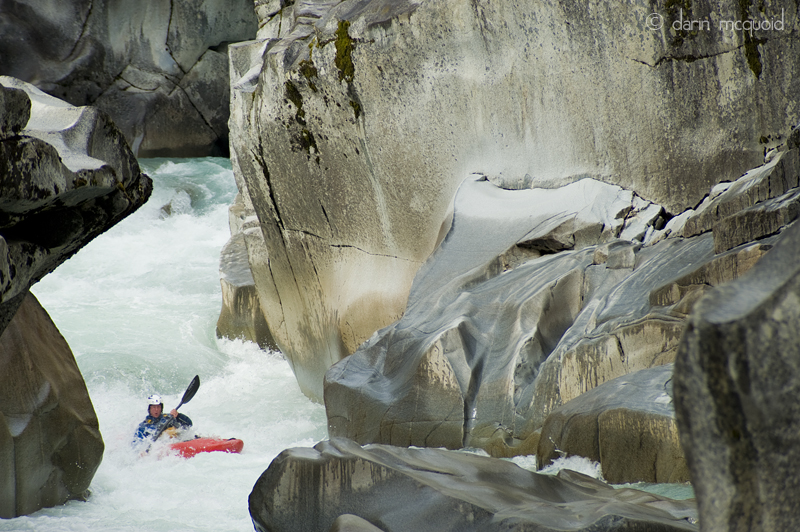 The crux move is a strong left to right move through a hole which has contrary intentions. 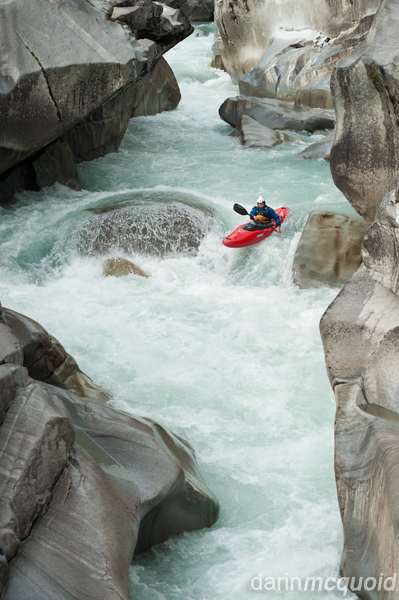 There is one mandatory portage on the Homatko. We had gotten a good bit of beta. The short story of what we remembered was that a tributary comes in, and scout right and eventually portage left. We also recalled something about having to get creative to cross a tributary. The river opened up below the Birthday Gorge, but soon dropped into another gorge. We also knew not to drop in too far, because it can be very tough to get out above the portage. According to Google Earth the portage is 26 miles into the run.

Since we had a leisurely start to the day we decided to just start portaging and making downstream progress. We paddled across the major tributary and embarked on some serious bushwhacking. Elevation gain was minimal but it was still slow progress through the brush and over downed trees.


Rush Sturges in the woods. 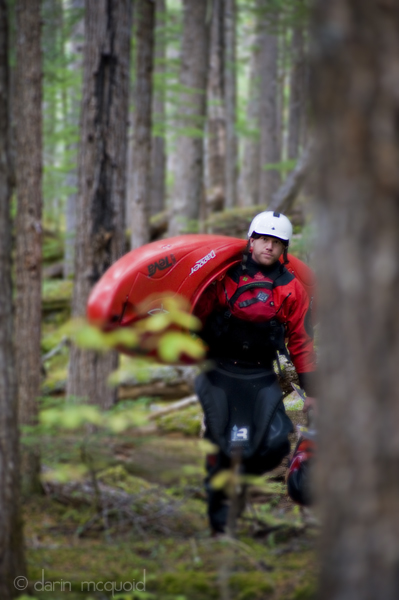 An hour into the portage and we were second guessing. Had we started walking too soon? Is this the right gorge? We walked to the gorge rim and it looked like the best whitewater of the trip. It's too late to go back so we push on. Eventually up ahead Charlie gives a hoot. We drop our boats and probe ahead to see why we are portaging.


Charlie Center and Jonas Grunwald peer into an amazing place. 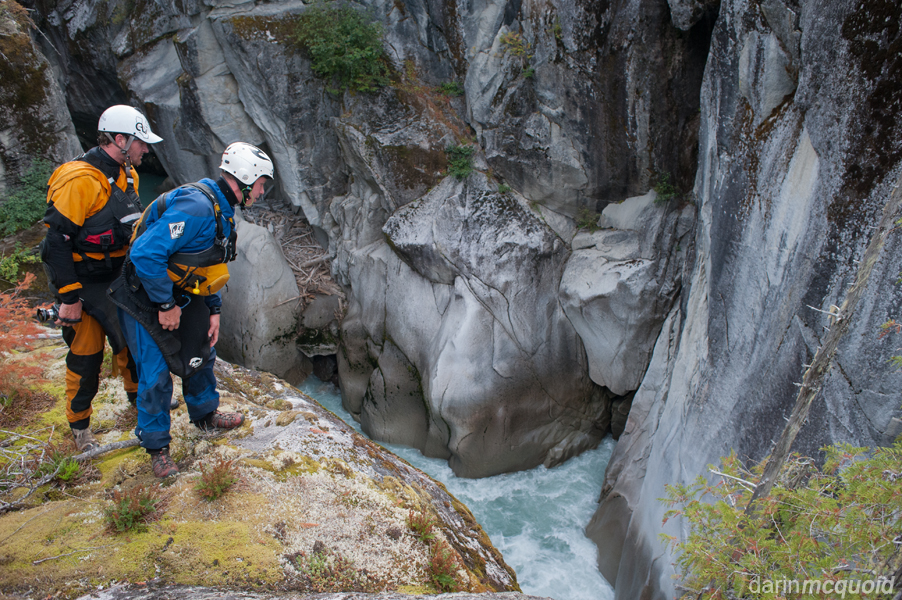 The canyon had tightened up so much that it would have been possible to leap across if we were so inclined. Down below the river fell twenty to thirty feet, and from some angles looked quite possible. Until the right (or wrong?) angle was found which revealed that it not only landed partially on a rock, a lot of it was going under the rock.

With a bit more scouting we ascertained that the portage would not have to go on much longer. We could either do some rope work down a gully a hundred yards below the sieve, or stay high and bushwhack down when the canyon stepped down. Tired of lugging our kayaks we decided to rope down, which took about an hour total.

Finished at the base of the gully we soaked in the scenery, the river carving through the seven foot wide gorge and into the large pool. We paddled across the pool and through a handful of IV+ rapids before things opened up, and we immediately started looking for a campsite because light was fading fast. We saw a beach on the left at the very end of the bedrock and went for it. Up above the beach was a wonderful overhanging cliff, which gave owners of dubious bivouac sacks a nice shelter. 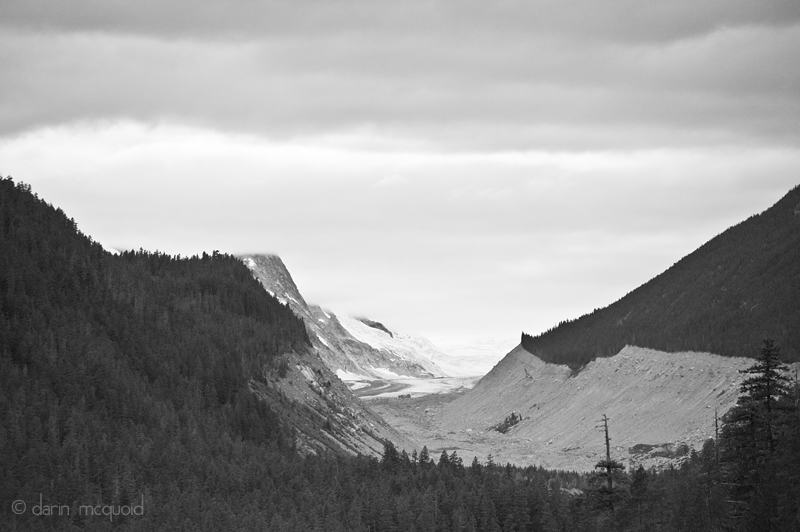 Rush Sturges and Katie Scott with Tiedmann in the background. 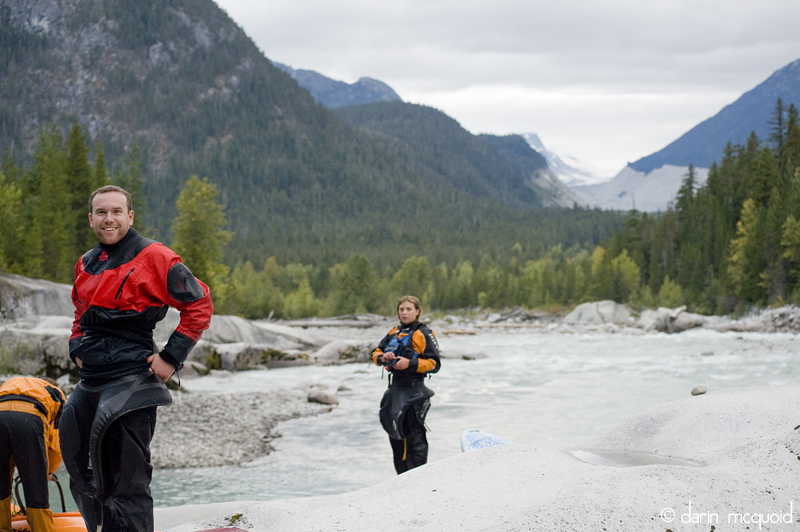 Looks like it's going to be a warm one...Charlie Center dries off his ground pad. 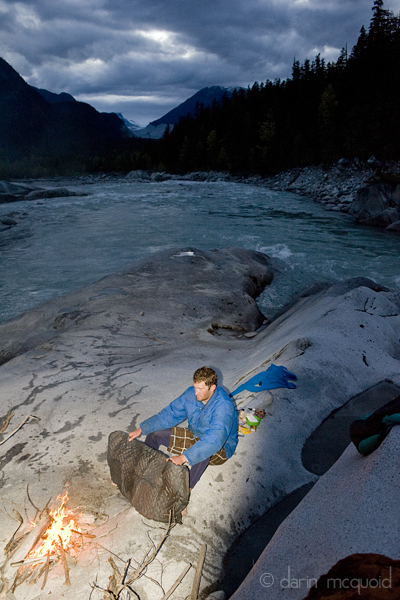 We cook dinner in the dark, exhausted by our long day on the river yet looking forward to the third day, which reputedly has the best whitewater.