It's that fun on the Kaweah. Ryan Knight and Chris Korbulic. 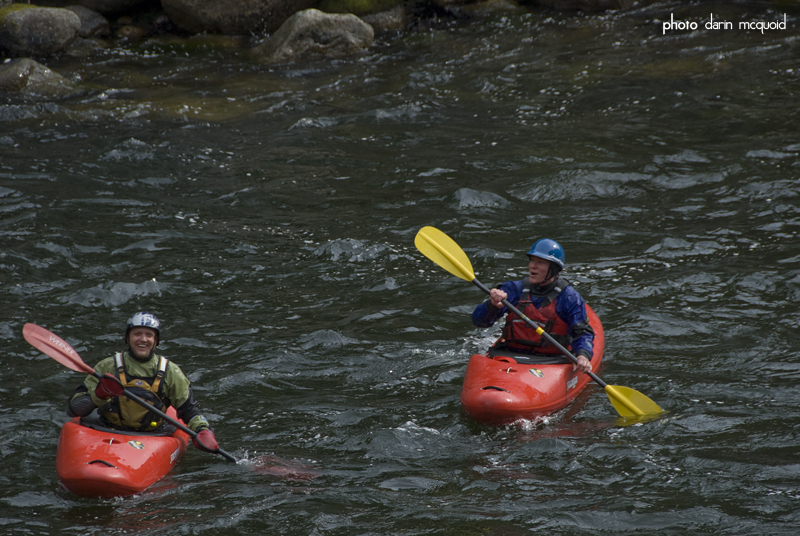 From my original write-up: "The Hospital Rock run on the Kaweah River is surrounded by quite a bit of dated information making the beta rather dubious as it pertains to the run and dynamic sport of kayaking, but logistically relevant. In “The Best Whitewater in California” it states that kayaking in the Sequoia National Park is illegal. Other sources report that it’s not illegal but “highly discouraged”. These days it’s neither, we were in the park two days with loads of boats, talked to rangers, hung out at access points, and had no issues at all."

Since our initial foray I've come back to this river twice. All I can say at this point is that the Hospital Rock section of the Kaweah is a true classic, one of my favorite one day runs in the state. It's full of multiple move rapids, clean boofs, fun slides and a little bit of vertical. The portaging is minimal, just 1-2, and a big zero if you are fired up. Although Big Kimshew Creek and the South Branch Feather sit higher on the list because of larger drops, Hospital Rock is up there on the list due to the fun factor. It can be a good low stress run with smiles all around, or a fun place to step it up depending on your abilities. The "bullshit" factor is nearly zero.


Coming back early in 2009 we decided to "check out" Chuck Kerns drop, a big slide I had seen before and doubted I would ever run. Parking for this drop is a problem, because the road ends at a campground that has no day use access. Serendipitously we arrived before the campground was open for the season, and were able to park near the gate.
Nice and green early in the season. 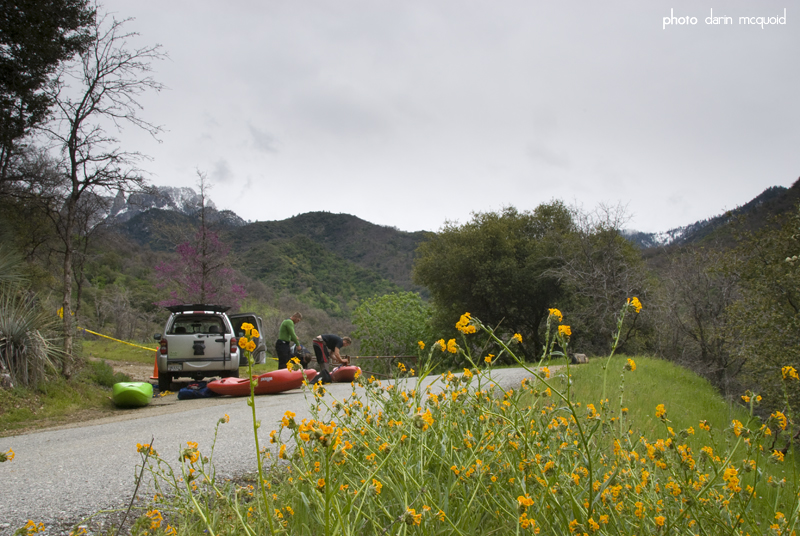 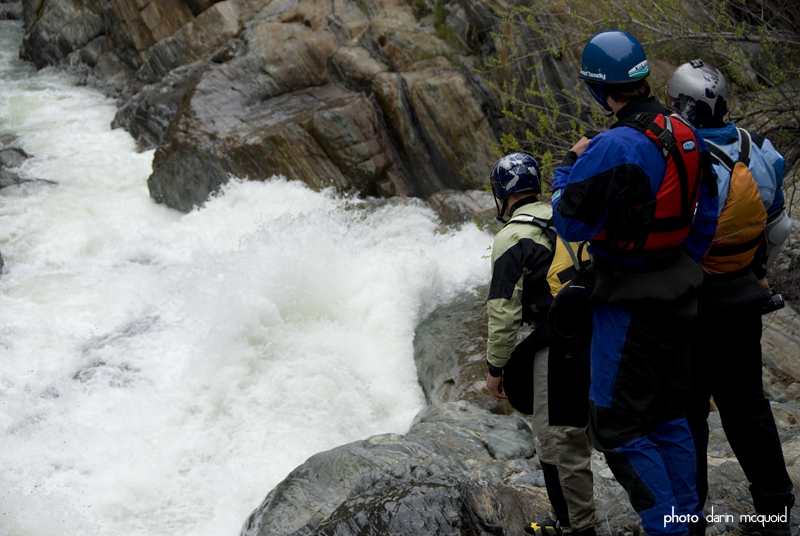 Chucks drop has to be experienced in person to appreciate. Much respect to Chuck Kern for first descenting this drop back in the day. Chris Korbulic follows in good form. 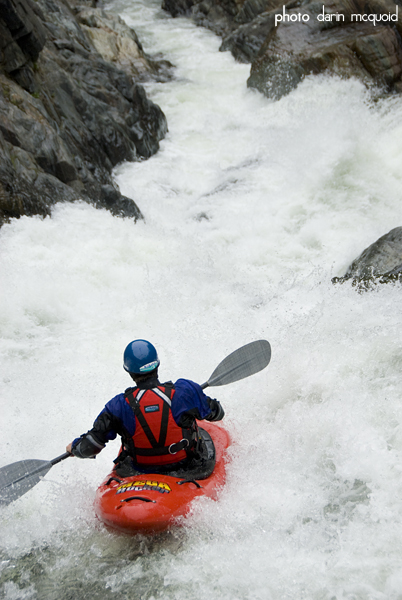 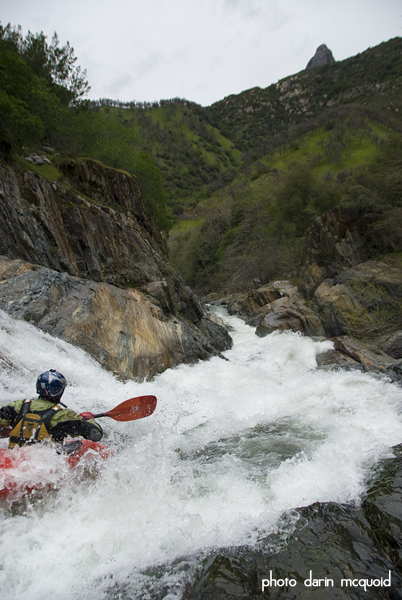 It's a lot larger in person, but at our flow of 730 on the gauge it was friendlier than it looked. Darin McQuoid 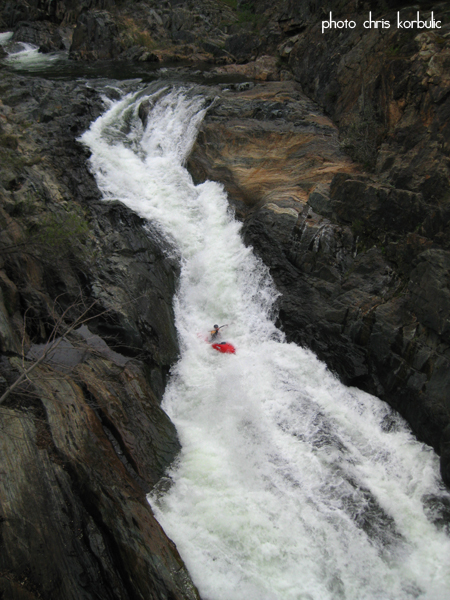 For some reason I was under the impression that below Chucks Drop it would be mellow, but I was sorely mistaken, this section of river is full of good slides and rapids.

Devin Knight on an unnamed one. 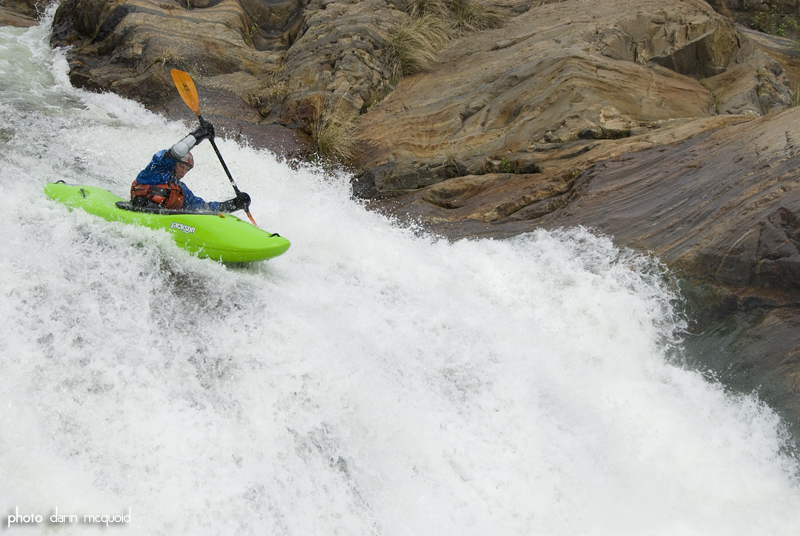 We made one quick portage around a boulder garden that fed into a sieve. There was a line, but it was too thin for our taste, and the portage just too easy.

During my first run on Hospital Rock I was confused by the Doc's Proplugs ad that ran for years. It showed a rapid titled "0-60". The one we had run on previous trips looked somewhat similar but not like the ad rapid. As we scouted the next drop it all came together. Most people call the rapid "v-slide", although I bet some call it "0-60". Either way it's a damn fine slide! Beware of a clandestine hole lurking in the left channel of the lead in.


Chris Korbulic and Ryan Knight planned to blue angel the slide, but the hole disagreed and spaced them out. Chris Korbulic. 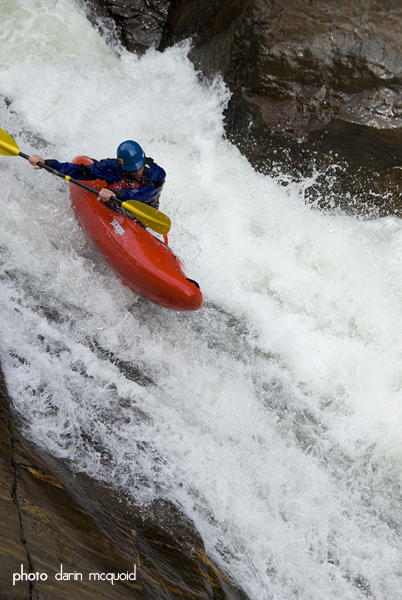 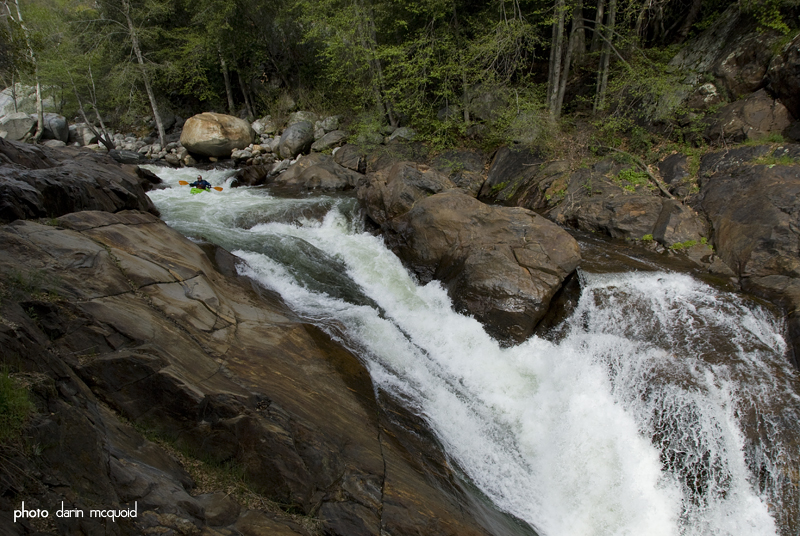 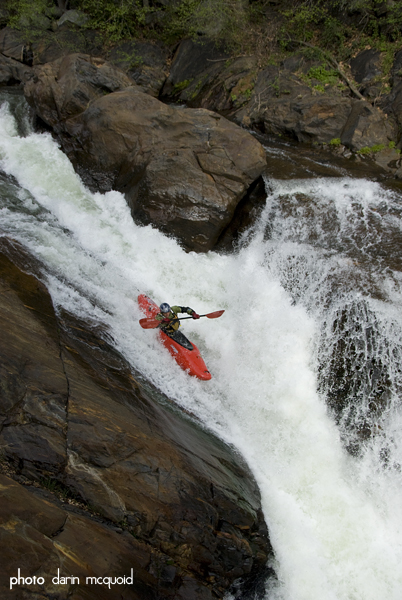 It just keeps going, with "Little Niagara" wrapping around a bend into a boof - Chris Korbulic. 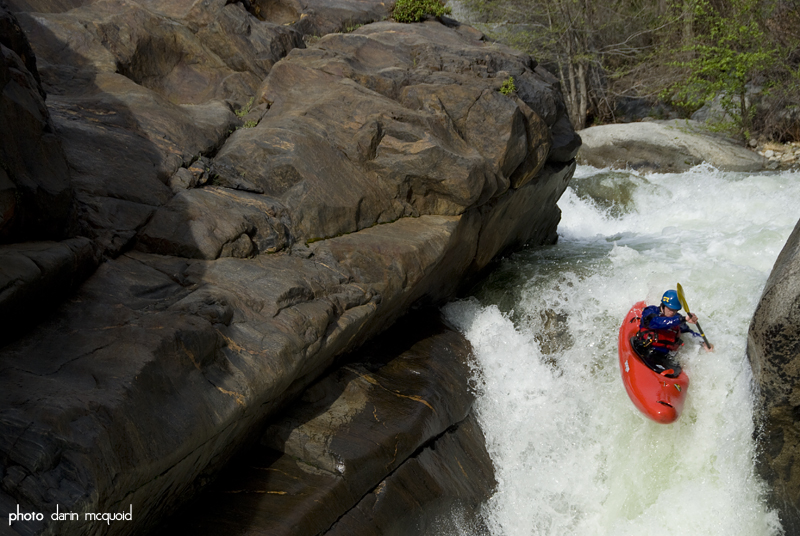 Little Niagara is occasionally portaged due to a cave awaiting paddlers who fail the boof. At lower flows it's a pretty easy boof though, and we couldn't resist more blue angels. Ryan Knight and Darin McQuoid. 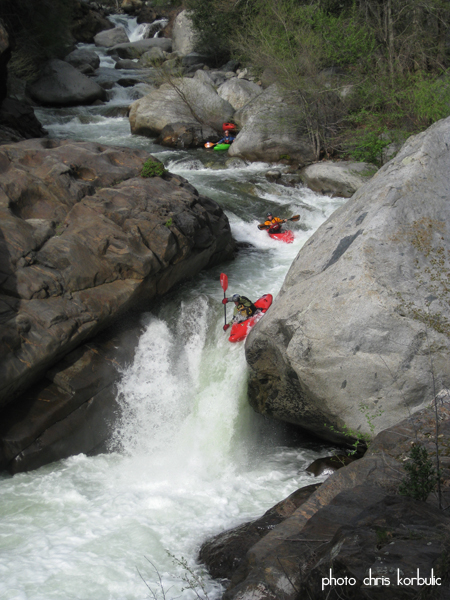 A few read and run rapids led into one more slide that dropped us in the pool where we previously put in. Devin Knight. 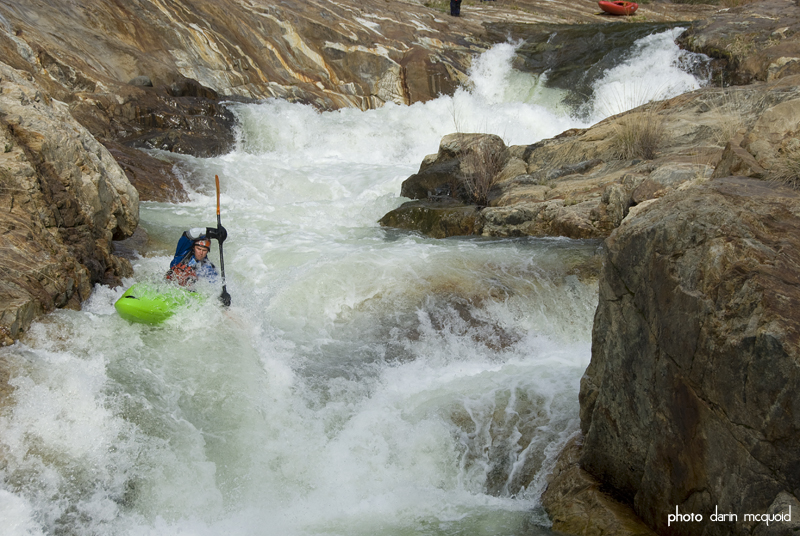 ...back to my original write-up


Here we are unloading boats a little ways downstream from the normal Hospital Rock put-in. Putting in here takes out the steepest section of the run. 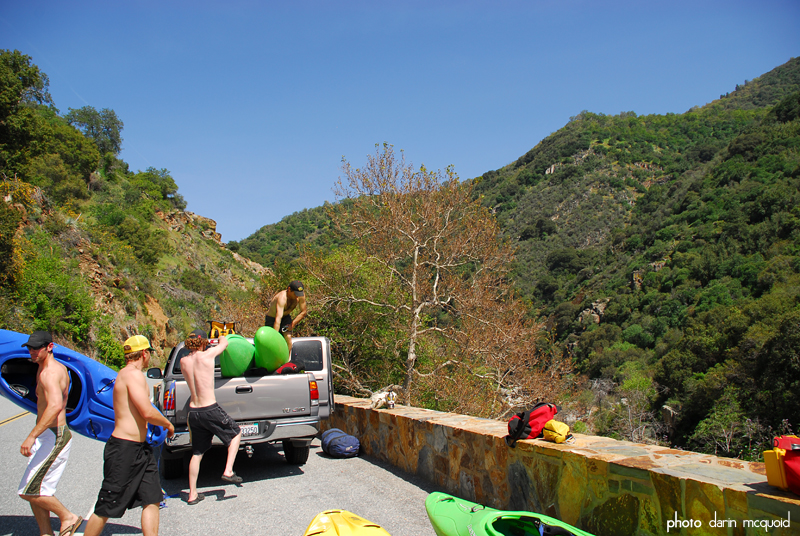 Holbek & Stanley state: "This section of the Kaweah isn’t a classic…” and the Kaweah River Log
says “Be reminded that this section and the continuence of the Middle Fork to the park boundary is very difficult and dangerous whitewater and should be attempted ONLY by experts under the most favorable conditions in strong groups.”

These sources and the long driving distance had been enough to steer me away from the Kaweah drainage. Word of mouth made the Kaweah drainage sound a lot better, and a lack of water anywhere else had us heading down to the Kaweah Drainage. We had medium low flows of 650 @ Three Rivers.Traffic was bad on our drive down, so we arrived late and lazed around in the sun at Three Rivers Hideaway, some boater friendly camping right outside the park.
We put on late in the day at three thirty in the afternoon. Taylor Robertson was leading the charge on the water, and with his uncanny ability to remember all the lines on an astounding number of runs, we made quick time down Hospital Rock. We made one quick portage and stopped to scout twice, one of the times being the “420 Gorge”.


Upstream view from the scout. 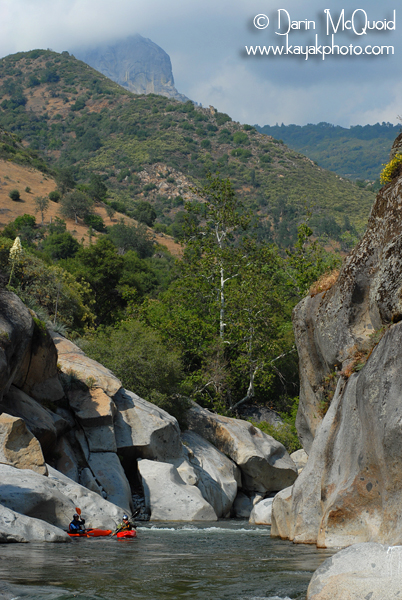 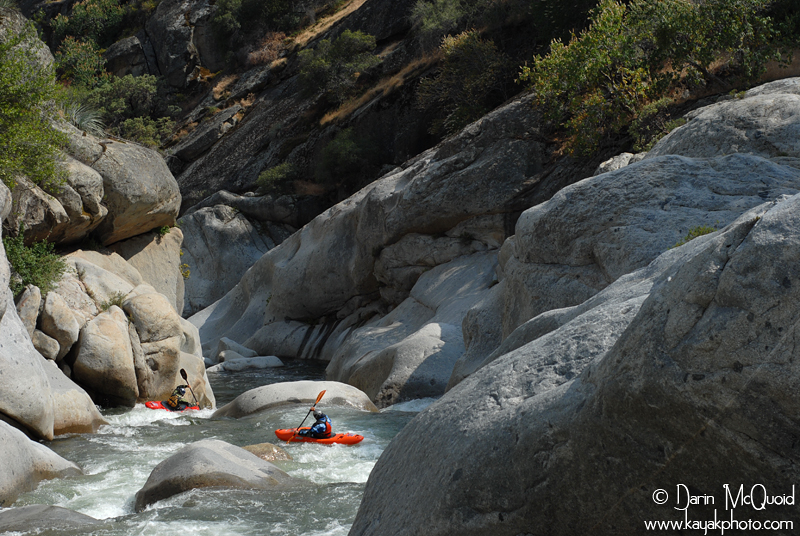 You can't really scout the last move that's on the left, but just drive back to the right side of the left channel. 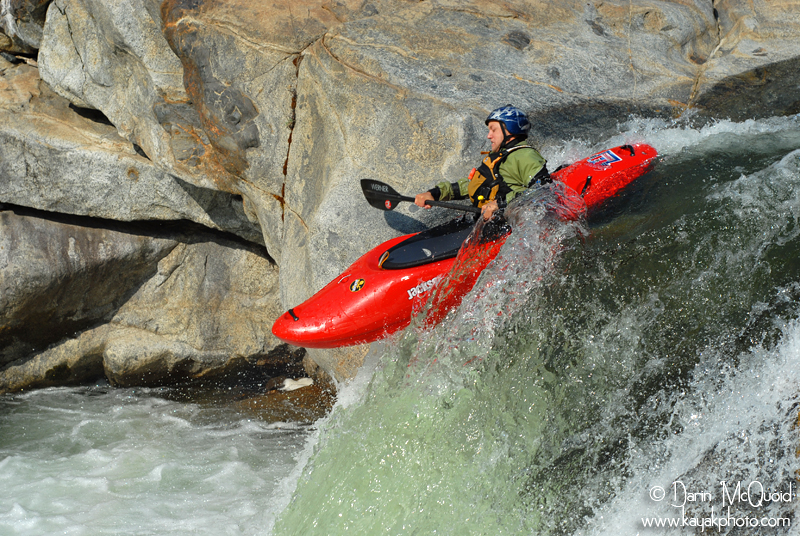 We ran a lot of class V blind with good instructions from Taylor, and soon enough arrived at zero to sixty, the most famous rapid of the run where he told us to scout while he probed away. This is a great drop, but not as large as I had mentally pictured it to be, as it's not the drop named "0-60" in the Doc's Proplugs ad. 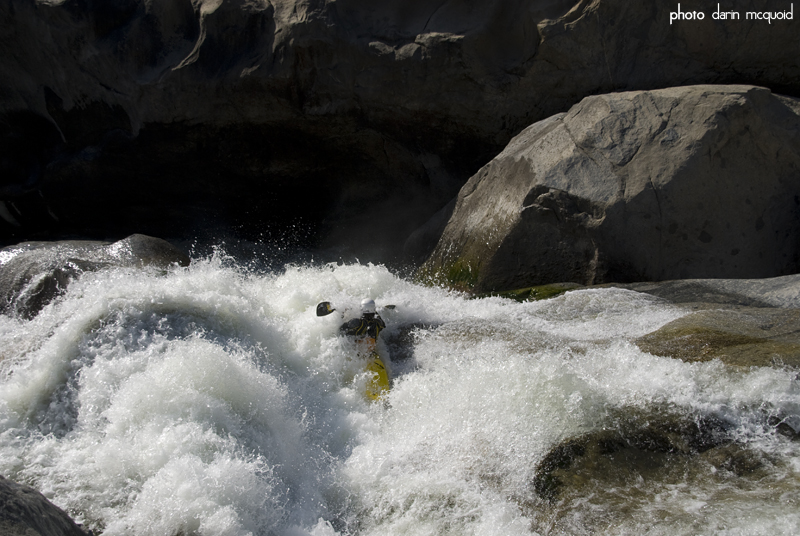 The major hazard in zero to sixty is a cave on the right, although at lower flows people can paddle out of it. Devin got in it his first run and hiked back up for a redemption run.

Here is Devin Knight getting redemption with Taylor Robertson in the foreground. 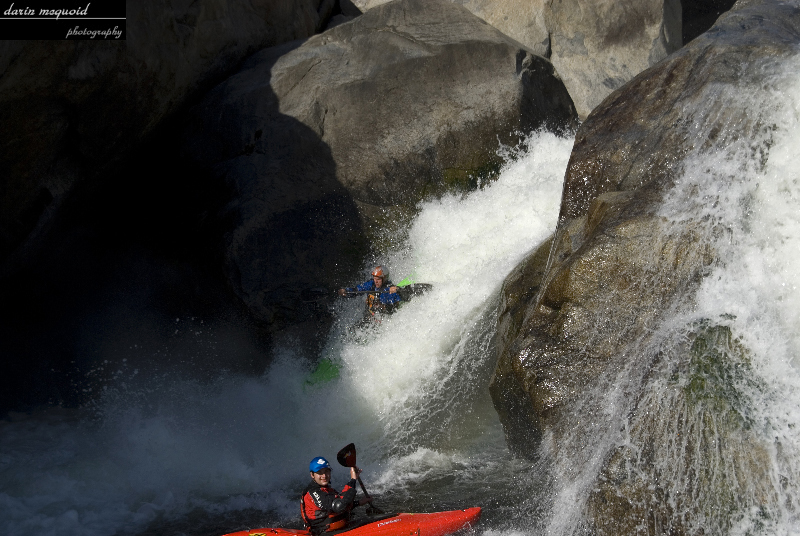 And one more view from a different trip with similar flows. 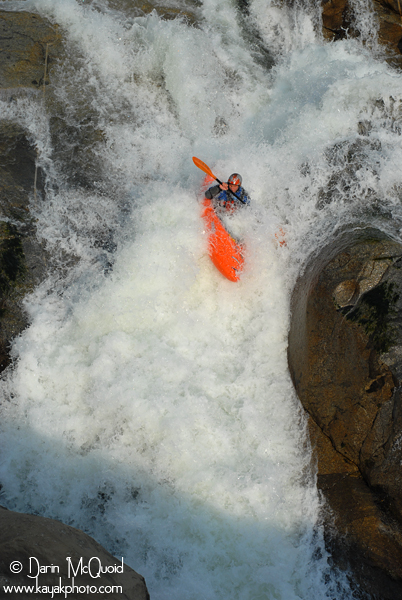 Hospital Rock is a class V classic that generally has a decently long flow window in the spring. If you don’t have someone in your group that knows the run, plan on a full day with lots of scouting and a portage or two where necessary. We took out at Potwisha, but the run stays high quality class V for a long ways when flows are higher. At lower flows it’s just a bit too boney to make continuing on worthwhile. All logistical info can be found in The Best Whitewater in California, or a AAA map. This one is easy to figure out. You will have to pay to enter the park, either $20 for a week long pass, $30 for a year or $80 for an all year all parks pass.