South Fork of the Trinity River "Klondike Mine"
IV-V
The South Fork Trinity is close to Hayfork Creek, which means it’s a long drive from anywhere. Because of that we got a pretty early start, and were flying down the winding turns of highway 36, surprised to see some snow dusting still in the road and on the trees. Small rocks were all over the road from melting snow, and soon enough we had a flat tire. We had no tools at all but thankfully our shuttle partner Tommy pulled through with a jack and tools from his truck, and we had the small dough nut spare on, and still made fairly quick work of the next 25 miles to the put-in. We arrived at the put in around ten and unloaded all our gear to make the shuttle easier.

Shuttle sounded straightforward in The Best Whitewater…so we were off looking for Klondike Mine Road. We passed on marked Forest Service road around 2.5 miles because it lacked a sign for the mine. 1.5 Miles later we turned down another side road that was initially paved but had no Klondike Mine sign. After a mile or so down this road it was completely abandoned and very overgrown. For some reason part of our group spent about twenty minutes hiking down a road that had about twenty years of overgrowth on it. When they came back up they said it just fizzled out. We hopped in the cars and drove back up to the first road we saw going down. This road seemed like it was going the right direction (down) and was in fairly good shape. A half-mile later the road ended with a huge embankment and ditch combo to close the road. We hiked a few hundred yards down the road and it seemed to be going the right direction. None of us wanted to hike all the way down it, but the guide recommended checking out the takeout so it wouldn’t be missed, not something that is done a lot in the book. Jon elected to bushwhack down to the river and check things out. We stood around at the top for longer than expected, and eventually Jon returned claiming it to be 100 yards and that he spent some time checking out scenery.

We piled into the truck and went back to the put-in, with time running a little short with us getting there about 1:00. I was a bit concerned with a 4.5 mile IV-V- run with two portages and a hiking take-out ahead of us. 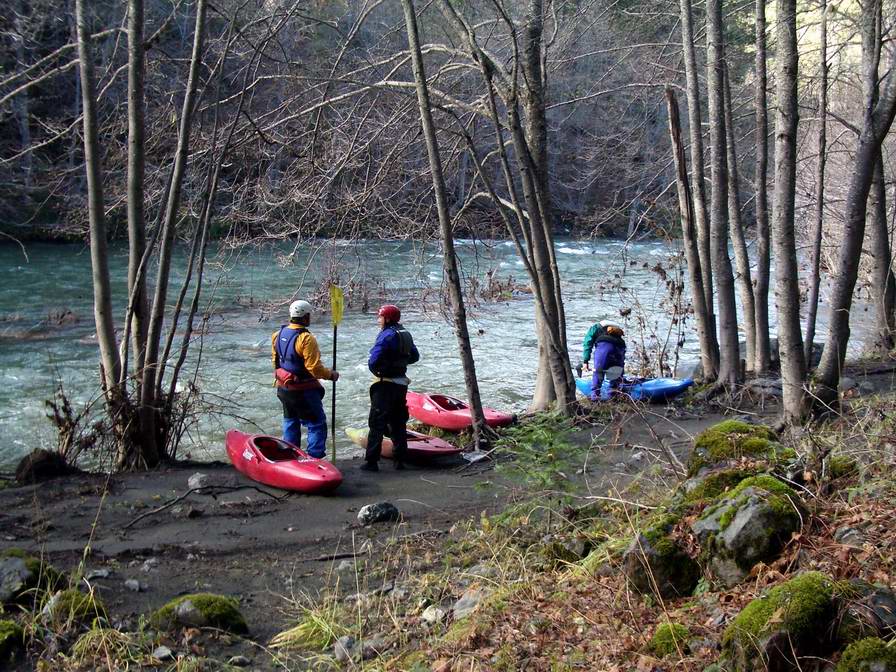 The swift moving water helped us make good time through a bunch of class II-III right off the bat, with maybe one class IV that was similar to the long class IV rapids on the Scott River.


Our first scout of the day was this big boulder garden. 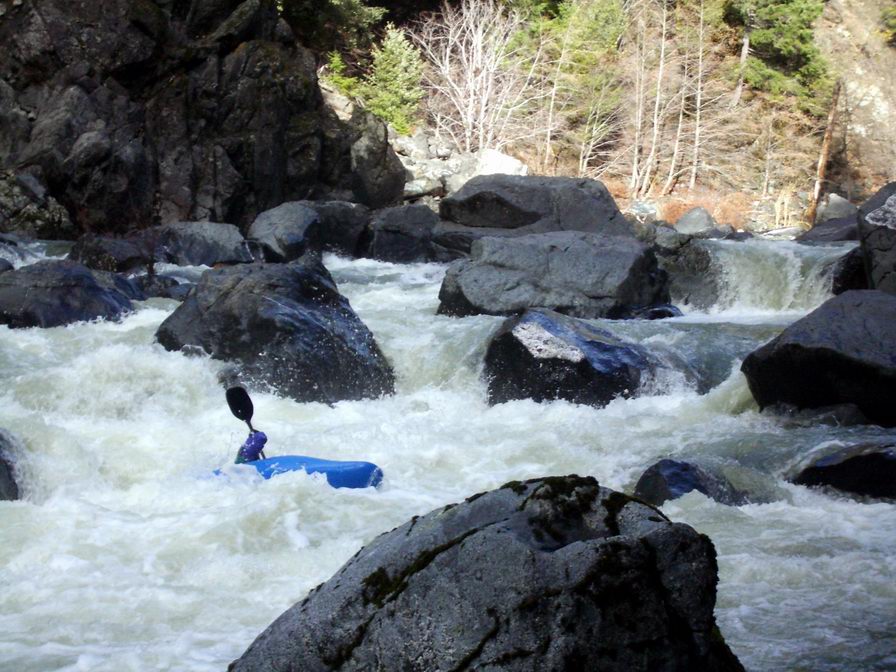 Joel and Tommy enjoying some of the great scenery. Moss and lush vegetation was everywhere. 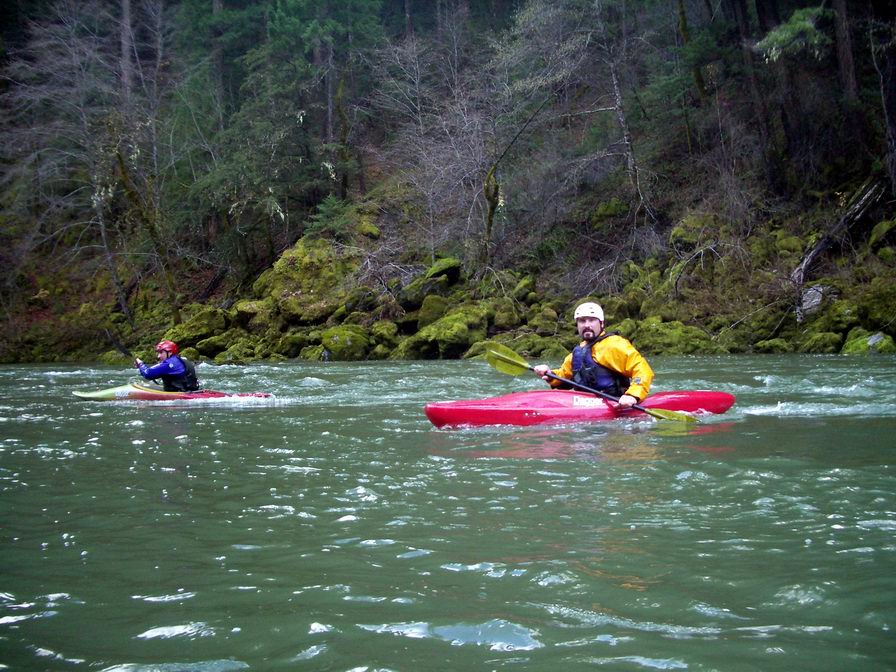 Another mile or so of intermixed rapids and we ran “Elbow Hit” with no elbow hits due to fairly high water. We knew that shortly up after this was one of the portages and indeed it was. The portage had a long lead in, with the majority of water flowing over a rock pile in the center. Here is Jon going for it on the right side.

The water was pushing a lot harder down the center than it looked, and Jon had a bit of a scary moment sliding up over a barley covered rock in the center, but thankfully there was a small hole on the downstream side of the rock, and he used it to surf back out the right side and cleaned the bottom drop. 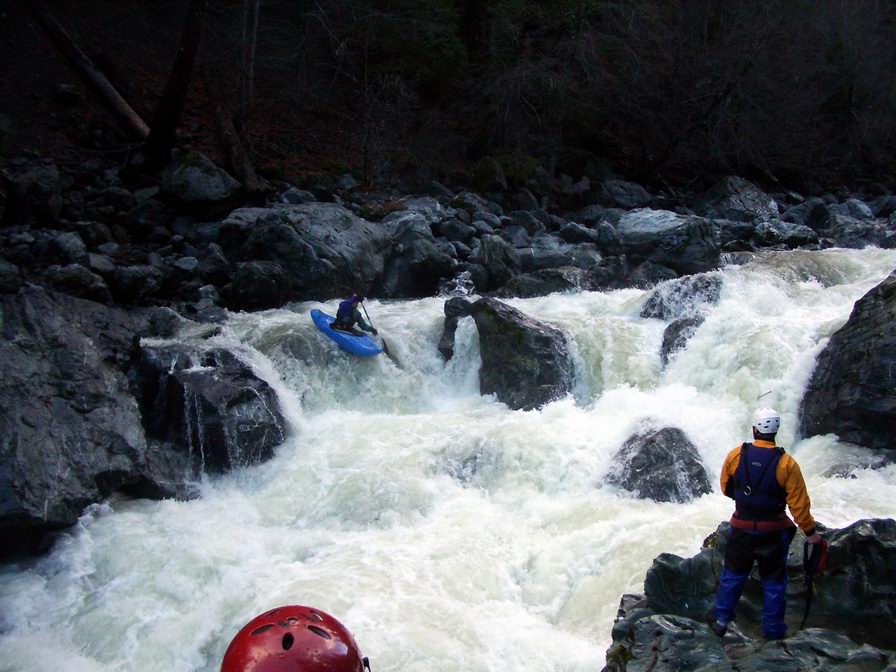 I was up next, and while not liking the look of it (hey it was ugly) felt like it was a go. I walked back up making sure to stop by at eddy that is right above the crux move and getting a river level view of my move. Even after seeing Jon paddle it I was surprised at how hard it pulled down the center. That sieve in the bottom center is really hungry.
Running the portage.

The next rapid up is “Nickards Delight” a fun splashy affair.

The time was now 3:30 and I was stoked to be off this run in the short winter daylight hours. The bottom of this rapid is where Jon hiked down to, so we got out on the shore and started heading up the hill. I felt like we were in Oregon Kayaking or something. 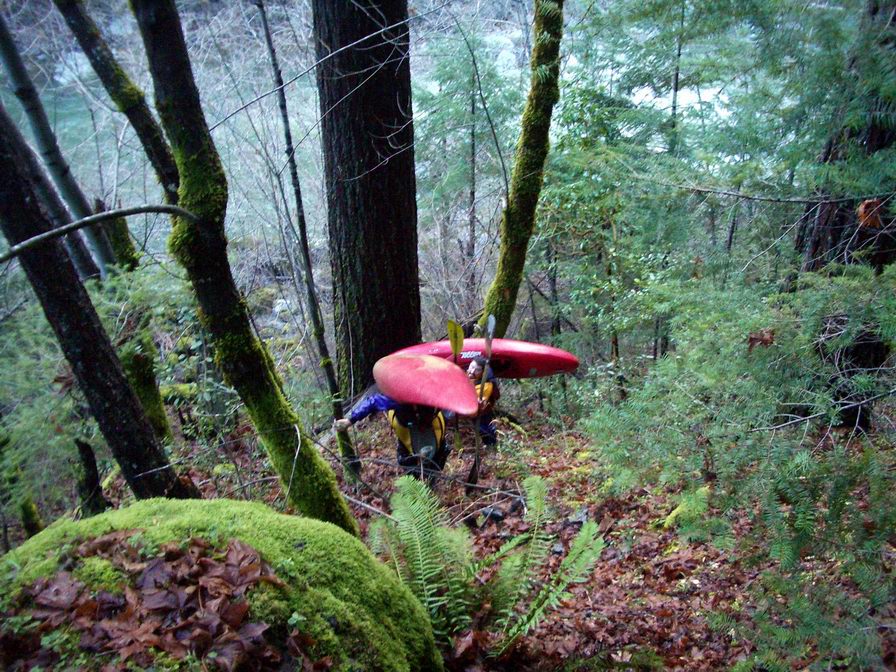 Here we are about 100 yards off the river, having to rope the boats up a steep section. You can see Jon’s blue boat in the woods, and Joel roping up his boat as well. 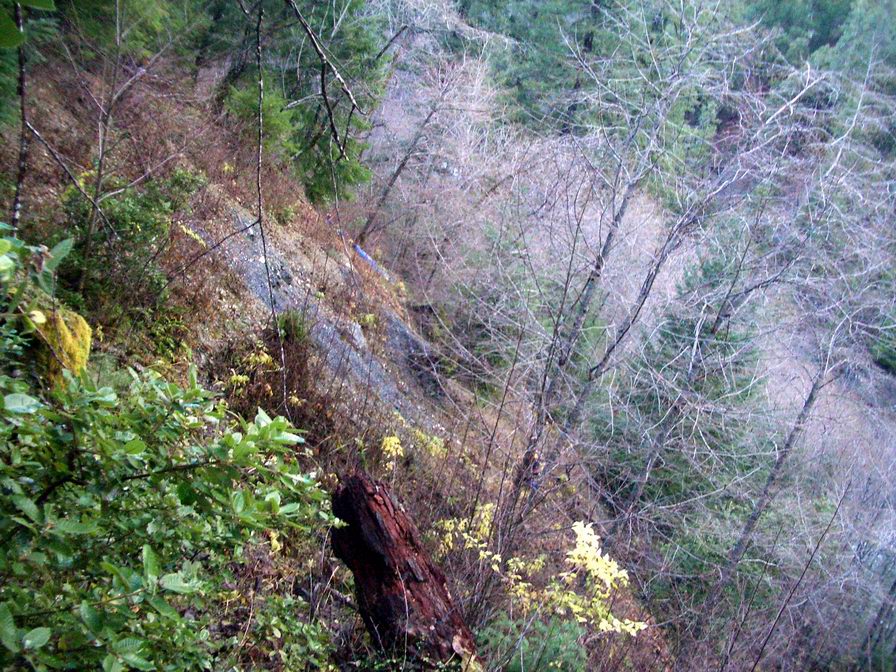 I thought it was going to be over pretty quick after this. Boy was I wrong. The carry continued on up the steep, overgrown hillside with us crawling up areas alternating between thick underbrush, moss covered rocks and muddy slides. The whole time I kept thinking “that must be the road” and yet it never was, for quite a while. Eventually after struggling up the hill, alternating climbing with throwing my boat down on the ledge and collapsing next to it, I emerged on the road at 4:30 with the rest of the group scattered on the hill somewhere. I’d estimate we hiked out about a mile up the steep banks of the South Fork Trinity. It would probably be a lot easier to hike 2 miles up the closed road, but you would also have to hike two miles before the run to make sure where your takeout was. Everyone else showed up about ten minutes later, and we changed and completed shuttle with darkness closing in. So for future reference, the takeout is more or less gone from this run, and it would be a great run to do a long multi-day trip on. Scenery is first rate, rapids are good, and the road is a long ways away.