We carpooled down to Chico on Friday night and met most of the crew at Taylor’s house, chilled for a while and went to bed with an early start due the next morning. We arrived at the take-out around 8am and loaded the vehicles. The power company was nice enough to shuttle for us.


Loaded and ready to go. 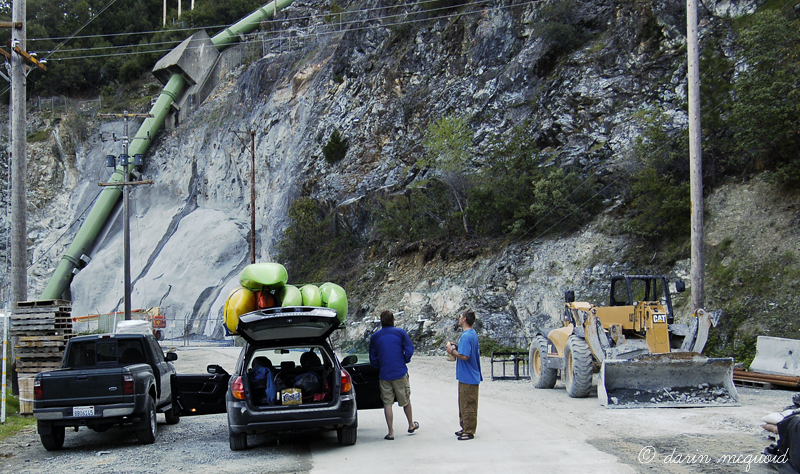 The shuttle was pretty straight forward and soon enough we were there loading our boats and wandering around. We managed to kill a surprising amount of time at the put-in, checking out the dam and chatting.


The release was 150cfs which came spraying out of this pipe below the dam. 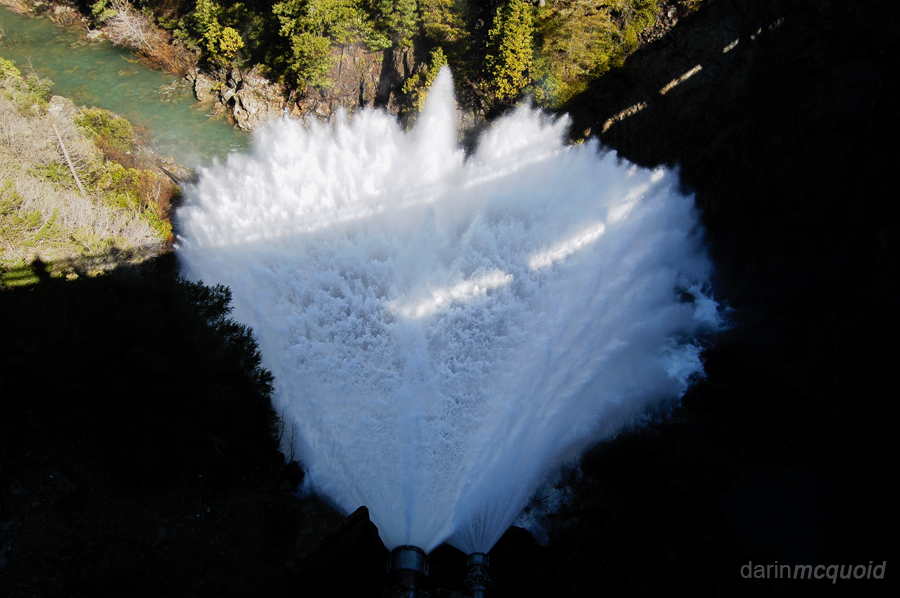 Putting in here was an awesome experience in itself, there was a trail down to the base of the dam and we paddled under the water fanning out of the release valve. Once we were all on the water the first mile went by very quickly without much gradient loss. We knew we would be getting it on soon, and eventually got out to scout. What was saw was a mess on the left, with a fun center to right slide line that went. 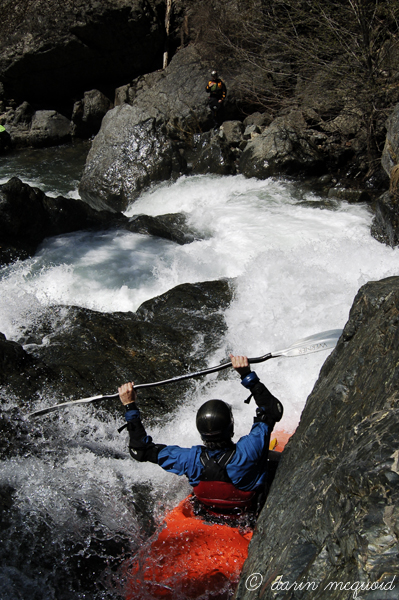 After a tiny bit of boogie water we were out of our boats to scout again. The first drop looked great, a class IV lead-in to a sweet twenty footer. We all noticed that this was where gradient dropped out of the run.


Dave Garringer, Taylor Robertson and Dustin Knapp scout with a big horizon line in the background. 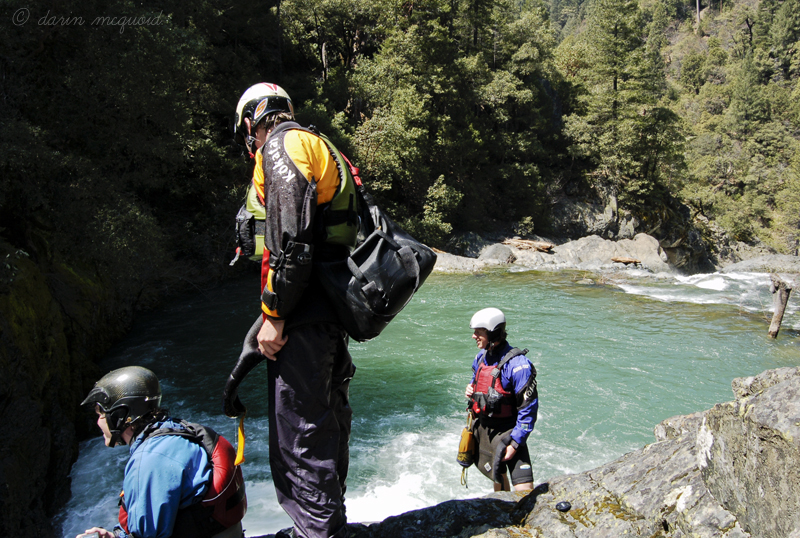 Devin Knight was obviously fired up about this drop and ran it first. 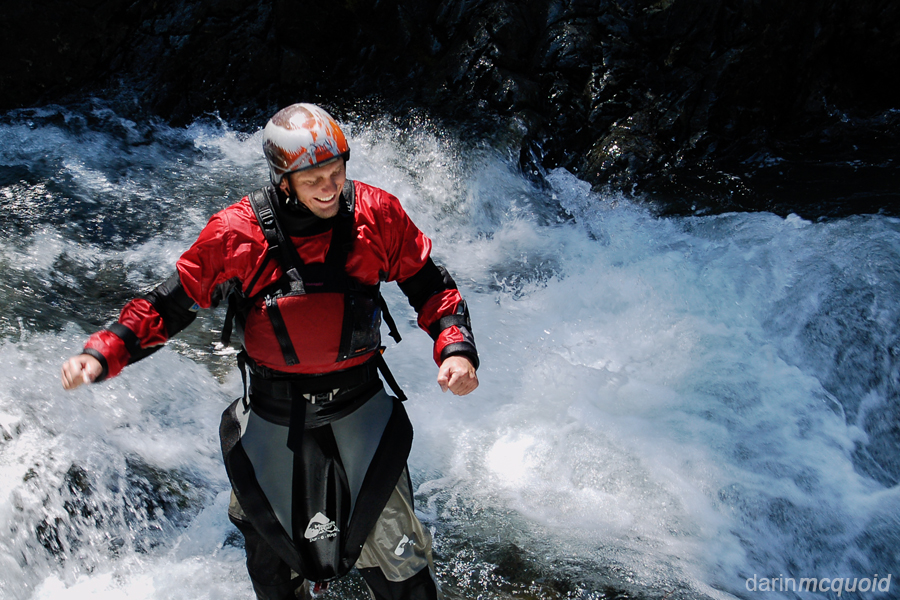 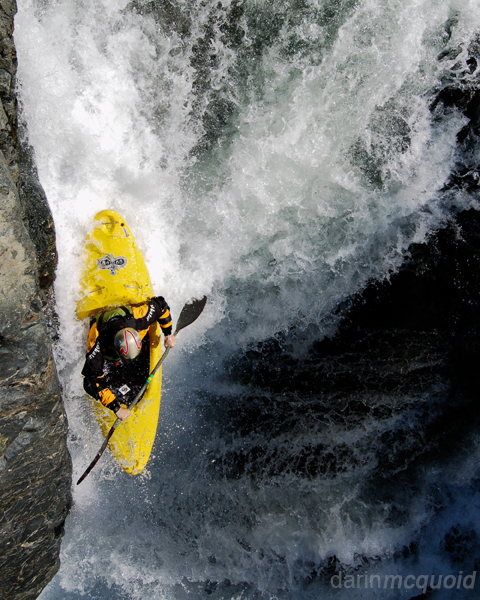 While heading back up to my boat I made a huge mistake, Dustin hopped some rocks and took a glance at the lead in, I asked if it needed to be scouted and he said there was really nothing to look at. At this point I should have scouted because my boating abilities are nowhere near Dustin’s paddling skills, but I got lazy and hopped in my boat. I hit the first drop in the lead in and got flipped by a lateral hole. At this point I was more then a bit worried, as the lead-in goes straight into the falls, that is clean but very similar to Split Falls on Fordyce with a large ledge on the bottom. Thankfully I rolled up in time and came ripping around the corner and ran straight into the driving right move on the waterfall and made it through clean. Whew, what a humbling experience though. At this point I also need to apologize for the pictures, for some reason I had my white balance set way too high and most of the photos from the day washed out to some degree.

The group collected on the left after the large pool, knowing from aerial reconnaissance that this was where it was going to get steep. The drop looked amazing, most of the group was considering it while I looked at portage routes due to the previous humbling experience. While scouting we ended up scouting further downstream to find out that this large drop pushed into a thirty footer, which in turn pushed into mank and a sixty-foot waterfall that landed on a rock. There was a eddy below the first drop, but after that it looked extremely hard to get into an eddy before the mandatory portage. We all started portaging down the left, skipping this sweet rapid. Taylor and I also shared a hate if highs and were moving cautiously on some of the steep parts, with a few moments of early in the day “sewing machine” leg action in the high spots.


Could be so good… 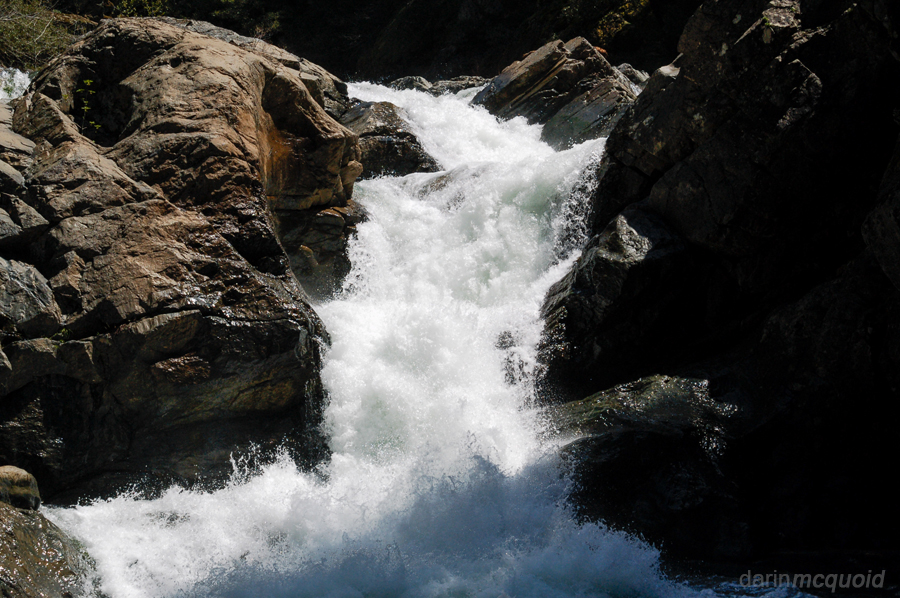 If only there was a pool before this... 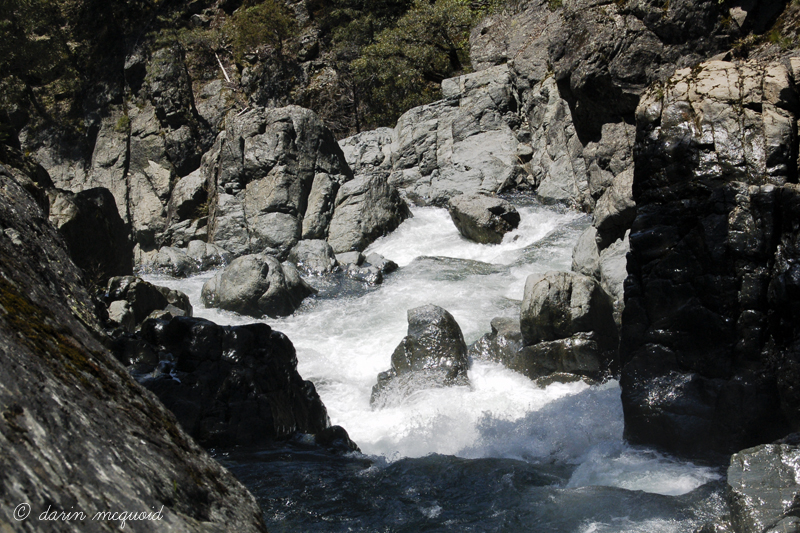 After portaging the first two drops we ferried across to river right to complete the portage around the big one on the right. This one could go to, but pushes into the portage so hard that the ferry across was surprisingly hard, let alone resurfacing from the falls with downstream momentum.


Devin ferries across below the clean 30’ falls. 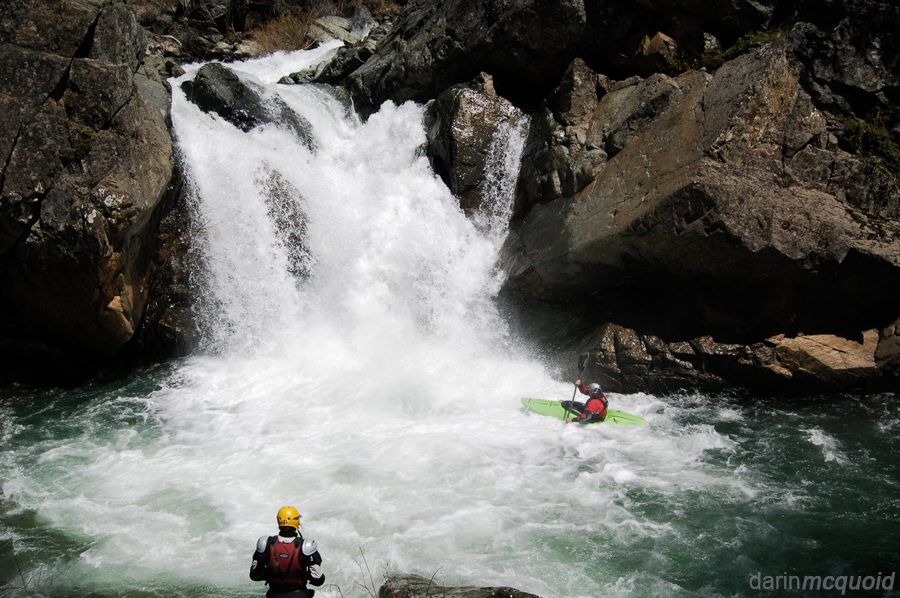 The exposure being off shows in this one, but the gradient is obviously there. The portage on this one was pleasantly easier than one would imagine, requiring a little rope work for the second time of the day. 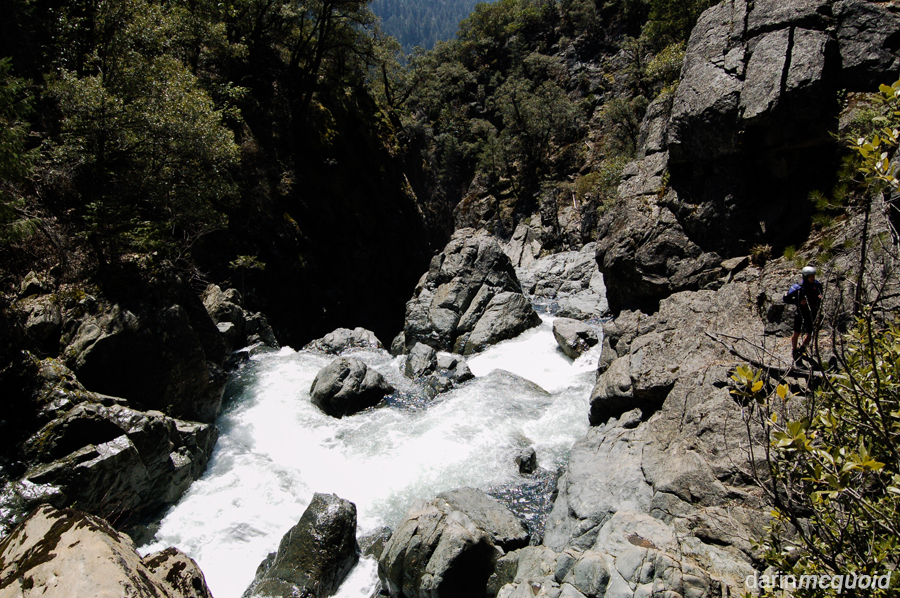 Here is looking back up at the falls with a rock centered in the landing. 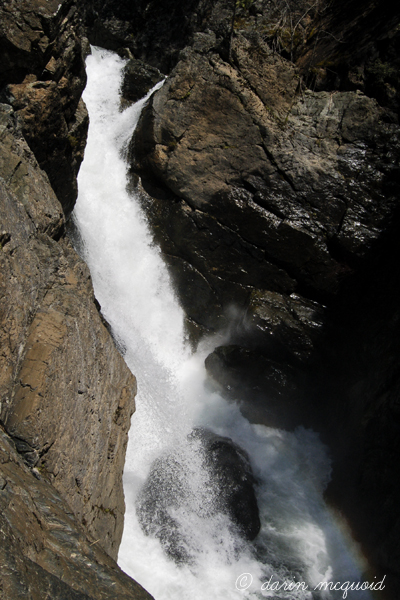 Just after this we paddled for about fifty yards before coming into the next portage. There was kind of a funky move on this one, you had to blast through a small but strong pocket hole, into an eddy on the left, then ferry across to an eddy on river right. Devin and Taylor went first, while Dustin tried to blast straight into the eddy on the right and to everyone’s horror got blown downstream. Dustin kept it calm and hit another eddy on the left and climbed out to get in the upper left eddy. I blasted into the eddy on the left, and then proceeded to entering the current for the ferry with no speed at all. To my alarm I caught my edge and tripped. I was only slightly relieved to be flushing into two rocks at the bottom of the eddy. Going into the rocks I bridged my paddle across the two rocks and to my comfort was able to roll up in the eddy and hit the ferry across with a little more gusto. Right after this we had a lunch break and contemplated a large but run able drop by the lunch spot.


After lunch I set safety for Taylor and Devin, who both ran this meaty drop, of which I wasn’t able to get shots while setting safety at the top. 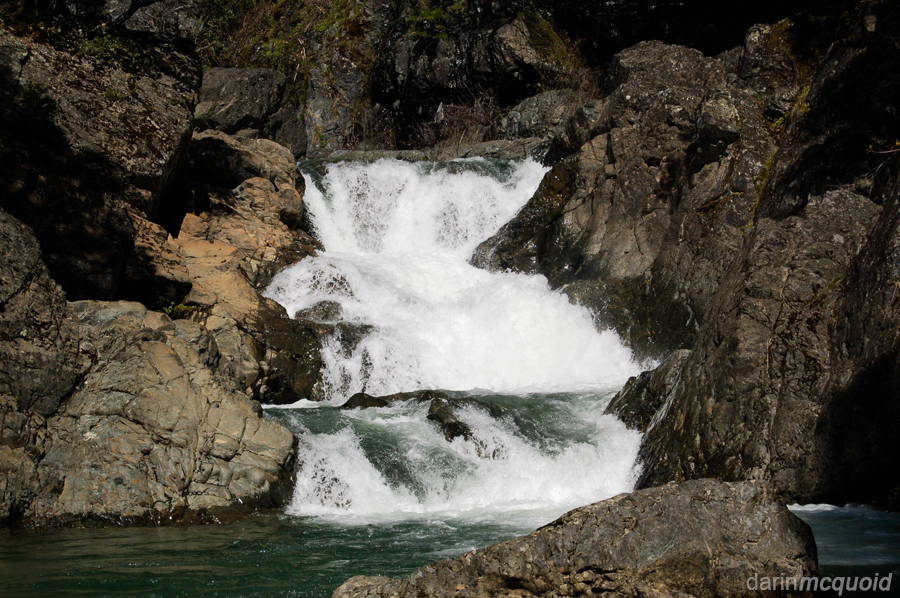 A few more manky drops we portaged, then we got to run this fun drop, a brief respite from the sieves.


Dustin Knapp with the mega boof. 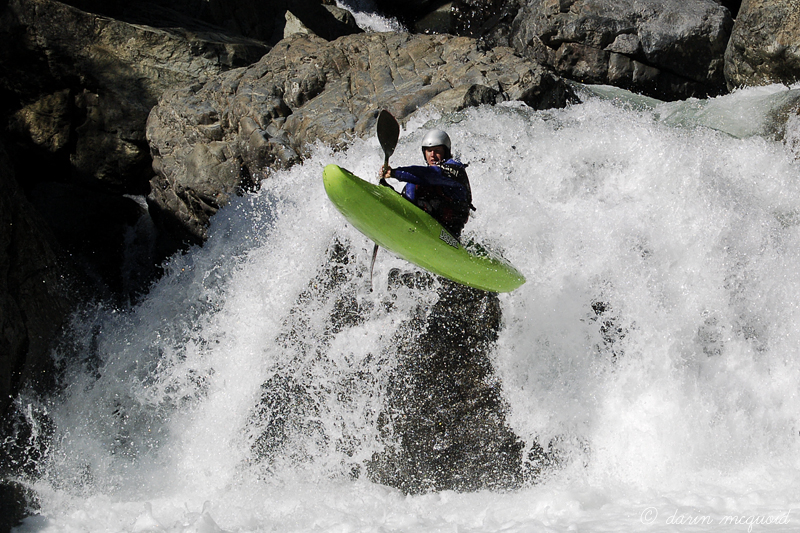 Next up after this was another huge horizon line. The initial drop was a somewhat clean 35’ waterfall. It had a rock in the middle that a lot of water was piling up on, but required a right to left move down the right hand side. I think we all liked it, but it pushed straight into a sliding 35’ falls. We debated it for a while, since it looked fun and the portage looked horrible. Dustin said there was a decent portage requiring rope work down the left side, and that it wouldn’t be too bad as long as you weren’t the last person. We both chuckled at this, but I proceeded to make sure I was in the middle of the group. Taylor and Devin both hung back a bit and seriously considered the drop. I had just gotten across the first sketchy move of the portage and had some serious sewing machine leg going on, while I clung to a rock and lowered Dave’s boat to him. Taylor saw this and decided to go high, accompanied by Devin. I was already too far along to go high, and ironically I was now the last person and knew I had to take the ropes down as I went. This was the most intense moment of the day for me, as I had to use a different tree to rope off of, and had to leave the rope for a while. I was clinging to a sloping slab and had to jump 5’ down to another sloping slab and hope I stayed on it. This took me a fair while to do. While I was contemplating the jump Eric had chosen to portage on river right, and became cliffed out at the top of the second drop. He eventually got a throw rope across and sent his boat off the cliff, and followed it shortly after. Eventually I made the jump and scrambled my boat and butt down off the cliff, glad to be standing instead of clinging. Here is looking back up at the double drop, we portaged left down the cliff to where the water is splashing the rock about 8’ up from the base of the second drop. 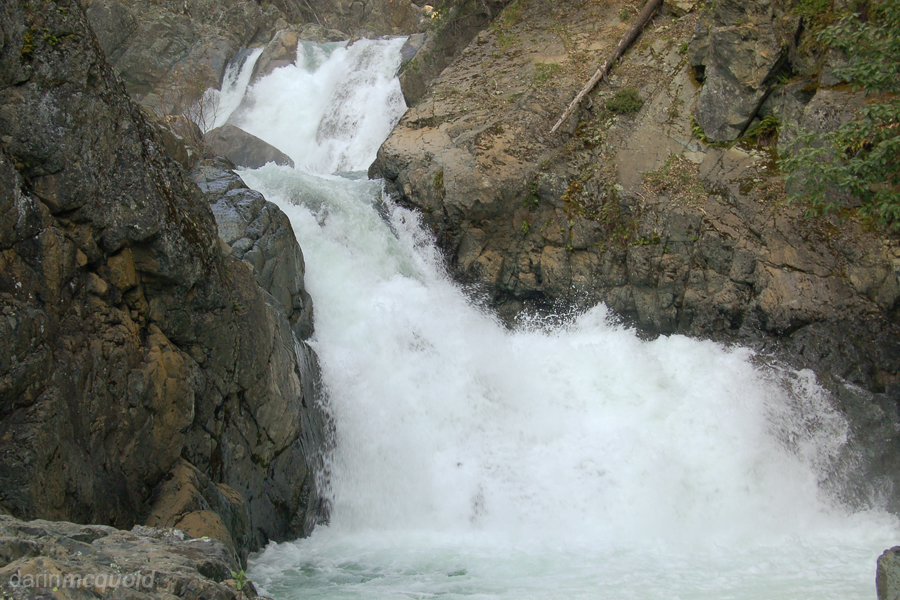 As the picture shows, light was starting to fade a bit, motivating us to get our hustle on. We hustled a portage around a 30’ waterfall downstream. It could have gone, but went through a good-sized crack and looked like you would take a hit on the way down. We were hoping with fingers crossed that the run would turn back into the fast boogie water we had on the mile in.


Somewhere in the mess Dustin runs a clean waterfall. 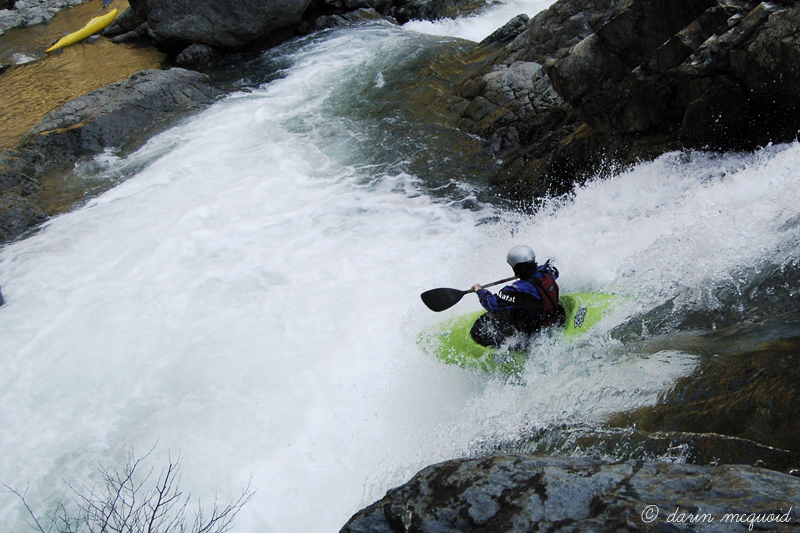 It never did clean up, we ended up portaging through huge piles of manky boulder gardens, and eventually took a game trail for about half a mile downstream on river right before dropping back to river level. Back at river level light was fading fast, and the rapids were still terrible. We boogied down the mank anyways, with all parties wanting to avoid a night out. I was exposed to a new style of kayaking in here; paddling up to the side of a drop, and if it didn’t go just sliding down the rocks beside the riverbed. I felt for my poor new boat, but after twenty plus previous portages time and energy were key. Downstream we saw the canyon begin to open up, and were all quite relieved. We ran another fun, clean 15’ waterfall right above the final portage into the South Fork Feather. At the confluence Devin, Taylor and Dustin walked upstream to run the last big rapid on the South Fork, and we all proceeded to run the pleasant class IV run out to the reservoir. We paddled into the take-out around 7:30, after a long ten-hour day on the water. I’d estimate that we portaged about six or seven hours of the day. This run was still worth it just to see. All parties agreed that less water (75-100cfs) would make a lot more of the rapids in the gorge ago, but add to before and after portages. More water would make the gorge impossible, but the paddle in and out better. They have posted flows for this run on dreamflows. I’d perhaps go back in once every few years for this epic, it’s a special place to see and be. Needless to say the area has plentiful poison oak and fantastic scenery.
HTML Comment Box is loading comments...