Last year when we were in the area and running Pauley Creek and the Sierra City run of the North Fork of the Yuba, Jon mentioned running Loves Falls. I felt we weren’t up to it at the time, and in retrospect am glad we didn’t run it last year. This year after the disappointment of Old Cow Creek and a fun but mellow day on Pauley Creek with Joel we were ready for a challenge, and flows seemed to indicate that Loves Falls would be near optimal. While drying gear at the Pauley Creek take-out we met up with Karl and Chad from Colorado who were also interested in the run. The write-up in Holbek & Stanley sounds less than promising, but Oregon Kayaking has a write-up that mentions the enticing word “classic” and motivated us to check it out.

Flows seemed adequate at the take-out, and guessing from the black and white printout of the Oregon Kayaking write-up we figured flows were close to the same minimum level. The directions listed on Oregon Kayaking are more than adequate, but we managed to bumble around finding the PCT Bridge, and eventually found it after hiking through surprising amounts of snow.  The level was looking good and all parties felt confident, we hiked in to the same ravine and were able to pass boats down to the put-in above the first significant drop.

Jon was hot on it and headed into the first drop followed shortly after by Karl while Chad and I situated ourselves in our boats. I ran down the first drop and landed but having to do a long brace in the eddy on the right as planed, but was surprised at how turbulent the water was. All I could see was a paddle blade moving over the horizon line, but couldn’t tell if it was a signal or they were paddling. Chad joined me in the turbulent eddy and we still couldn’t tell what was going on downstream so we spent several minutes trying to get into a small pothole without going over the horizon line into the hole. The eddy showed its strength during one of these attempts and gave Chad a full rock splat in his Prijon Cross, intimidating both of us a little bit. Eventually after way too much effort I got into the pothole and hopped out of my boat to see Jon and Karl standing on the right bank with their boats pulled out of the water.
What happened initially was Jon ran through the first drop, skipped the eddy and went for the hole while Karl hit the eddy and waited a little before dropping over. When Karl dropped over Jon was still in the hole trying to fight his way out, and both ended up swimming out and recovering all their gear minus one paddle. There was no question in my mind about carrying my boat three feet and seal launching in below the hole, but Chad was feeling it so Jon set safety while I got the camera out.


Chad lines up and goes for the sticky hole. 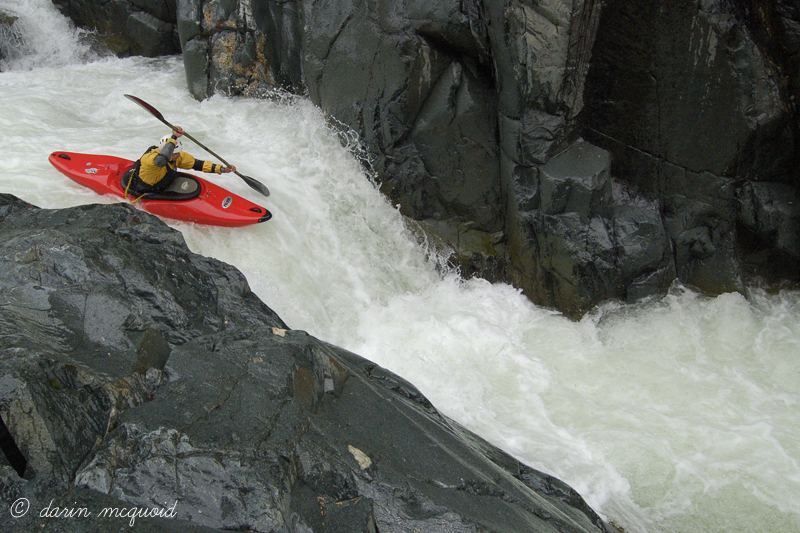 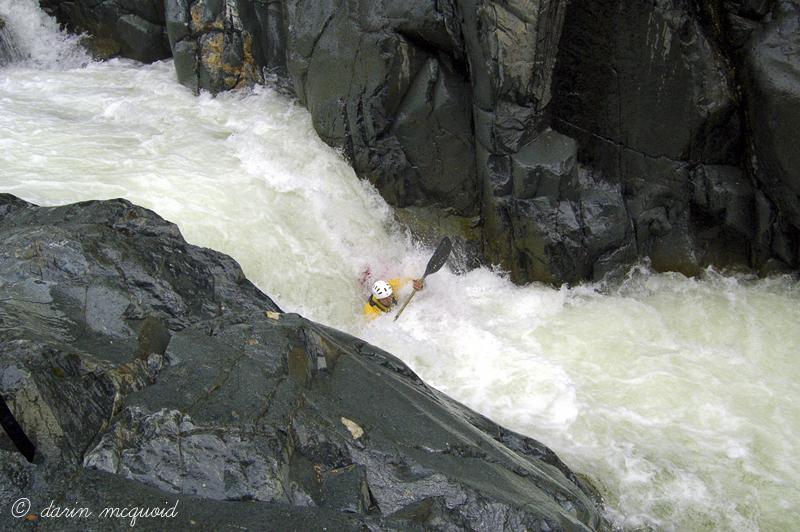 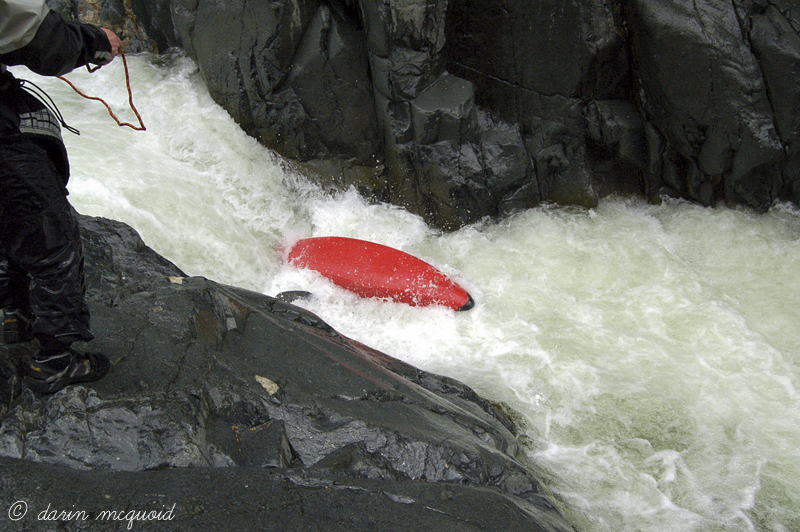 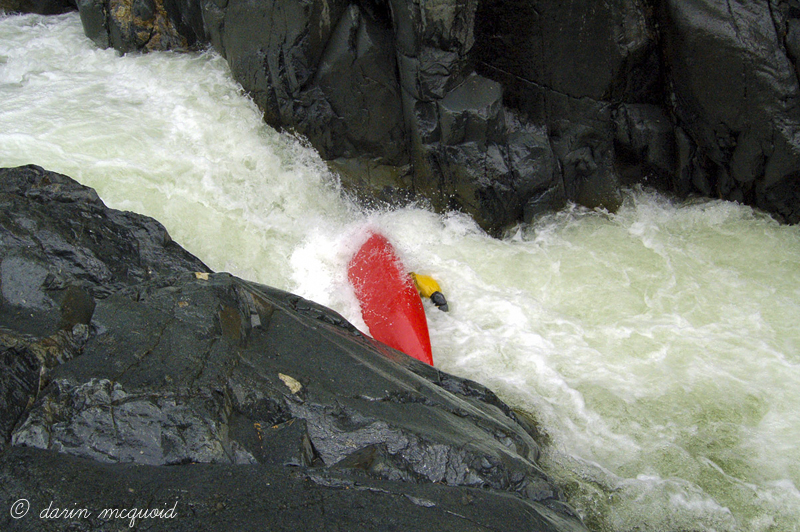 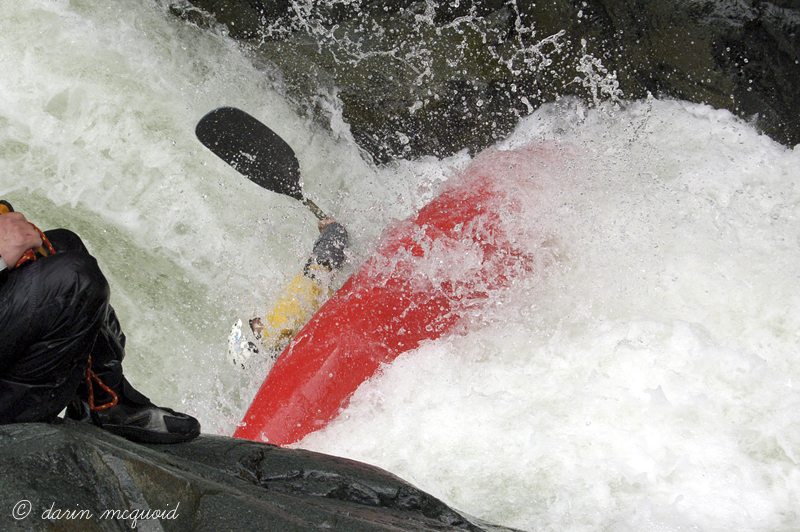 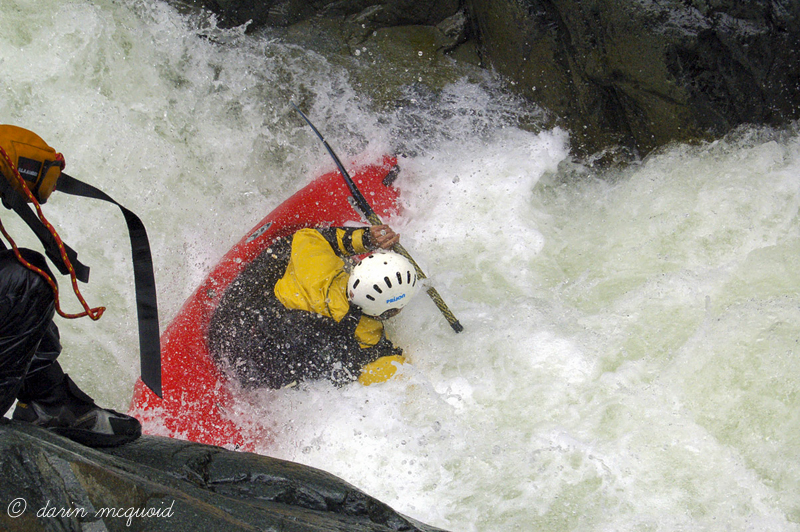 Chad’s run was probably pretty similar to the others, this is a strong hydraulic. Chad fought for quite a while and managed to get an ender or two but the hydraulic recirculated for about 10’ downstream and eventually he had the inevitable swim and all gear was gathered quickly. We regrouped on the shore for a few minutes, all a bit humbled. I had never seen three people swim within the first 50 yards and five minutes on run. At this point I believe we were all silently contemplating how close the bridge and trail were, but I hopped in and ran the next waterfall to look for Karl’s paddle and setup for pictures. What a sweet waterfall this one is at high levels, it has an amazing boof on the right side, one that if you hit right you can land perfectly flat. To top the great feeling of the boof I lucked out and found Karl’s paddle in an eddy.


Jon boofs the far right side of the second falls. 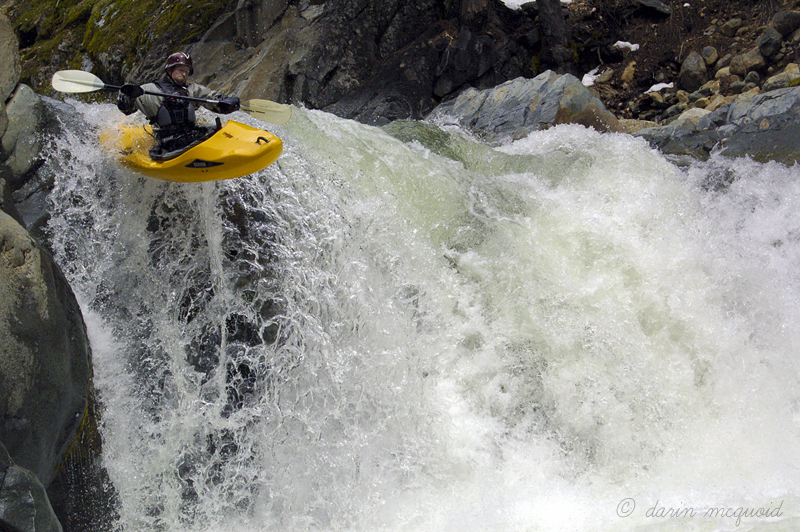 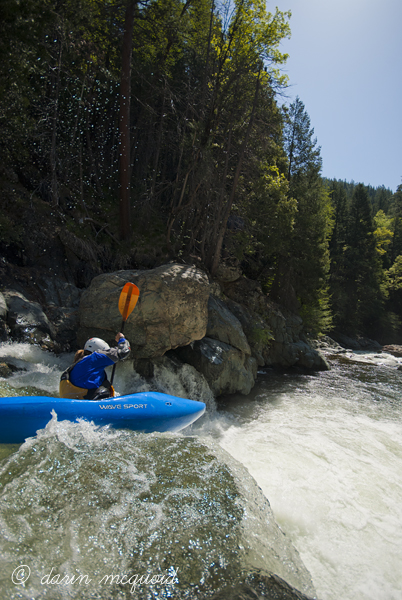 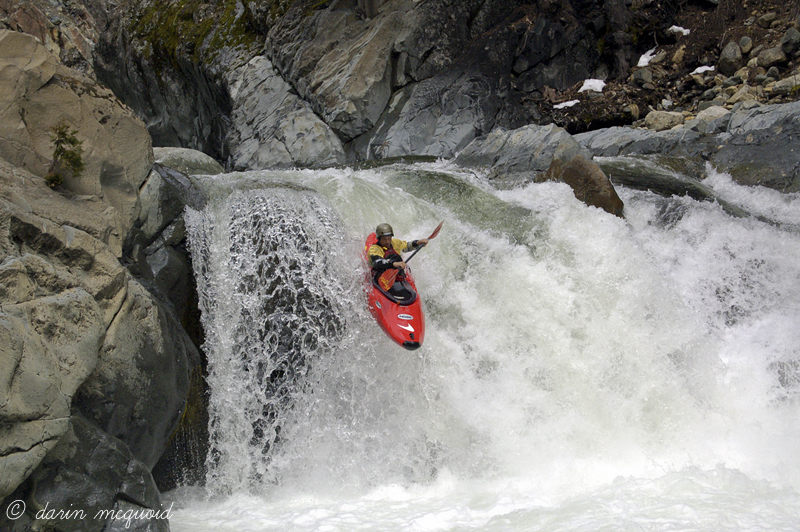 With the second falls done we had an extended scout through a junky rapid that was followed by the third waterfall. The third waterfall needed a strong right to left move at the high flows, as it had a large hydraulic at the bottom and an unfriendly room of doom on the right. I set safety for the waterfall and managed to get a decent picture location as well. Jon and Karl managed to drive the move while Chad and I both assumed we were far enough and plugged deep through the center.


The third falls from above. 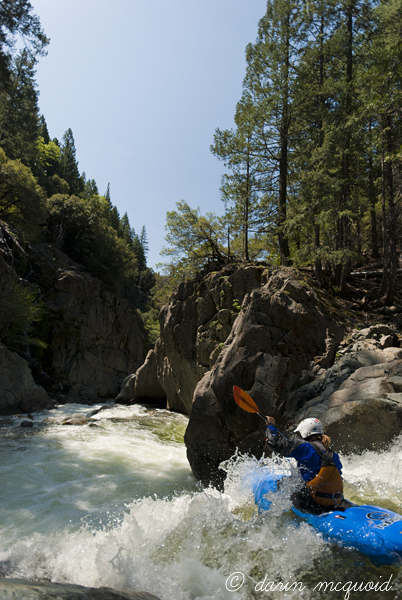 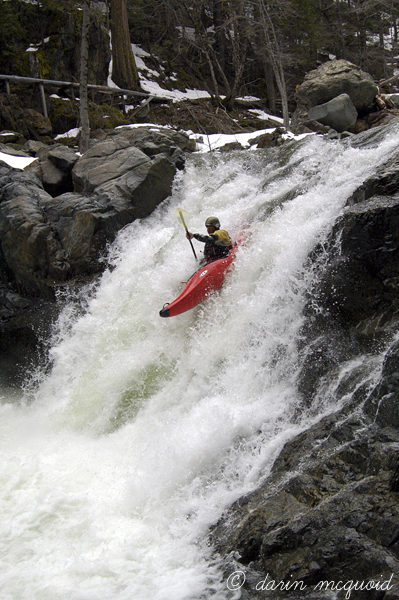 Everything on this run was larger then it looked, including the next rapid below the waterfall. We ran a few read and run rapids then got out to scout a ugly lead in to what proved to be the portage. At these levels the portage was very run able, but no longer a waterfall and it had a huge fold right above the large square rock. Some in the group debated but we all portaged down the right. The portaged down the left mentioned in Oregon Kayaking was covered with water. After this our pace picked up a lot, although we were still scouting everything. The river character changes after the portage and at our flows had tons of large hydraulics, most moves consisting of boof at the top and paddle
hard. 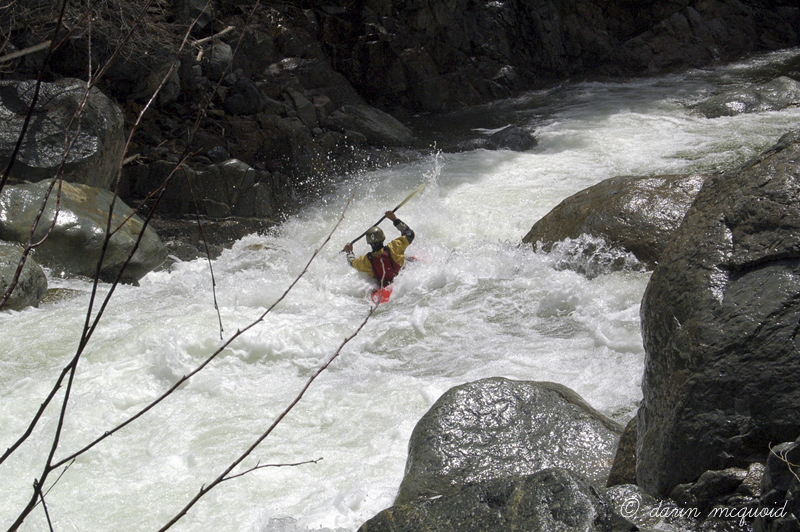 Jon on another boulder garden downstream. 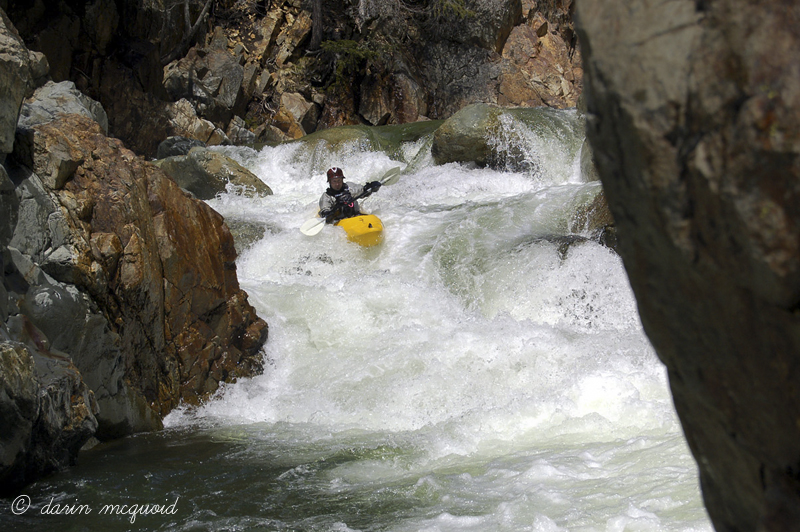 Downstream of the hydraulic section the river narrows up into a little creek again, with one notable narrow drop have tons of flow slamming into an undercut left wall. The entrance was trickier then it looked taking all of us into the left wall at the top and delaying the ability to move right as hard as needed, but we all survived without too much carnage. Two more good hydraulics followed that we had scouted while scouting the narrow drop. The canyon opened up a bit after these and it was all read and run down to the takeout bridge at Wild Plum Road.


The group drying gear and relaxing. 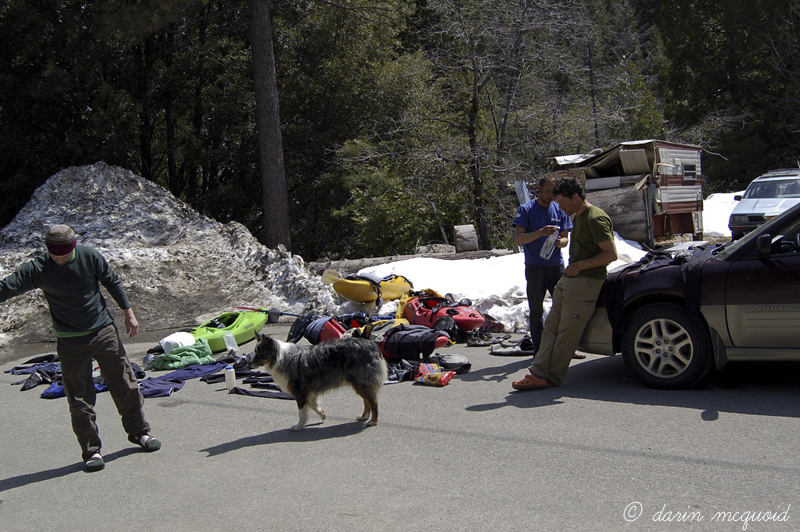 I agree with Oregon Kayaking that this run is a total classic that should be run more. We had a flow of probably 350-400cfs and 2300cfs at the Goodyear’s Bar gauge on the North Fork Yuba. It could still be done with a little more, but not too much. In the future at flows like this I will just put in below the PCT Bridge but above the second waterfall. If you're looking for a tougher section, it's been run higher up as well.