The Kaweah is a crazy place, within minutes you can go from sparse rolling foothills to forest so thick and verdant it's truly a jungle in there. A jungle of poison oak, so thick and vast that like taxes and death, there is an unspoken acceptance of it as part of life.

Earlier in the week we had driven to the top and nearly dropped in, but decided that it would not be a wise move considering the gradient shown on the map. Instead we hiked in three miles to Admiration Point. This trail is shown on the Topographical Map, but not on the map that's handed out at the park entrance, and as such is not well known. What we saw surprised both of us, not that the river falls over a series similar to Seven Falls on the South Branch Feather, but it does it in a gorge.

Surveying the scene from Admiration Point. 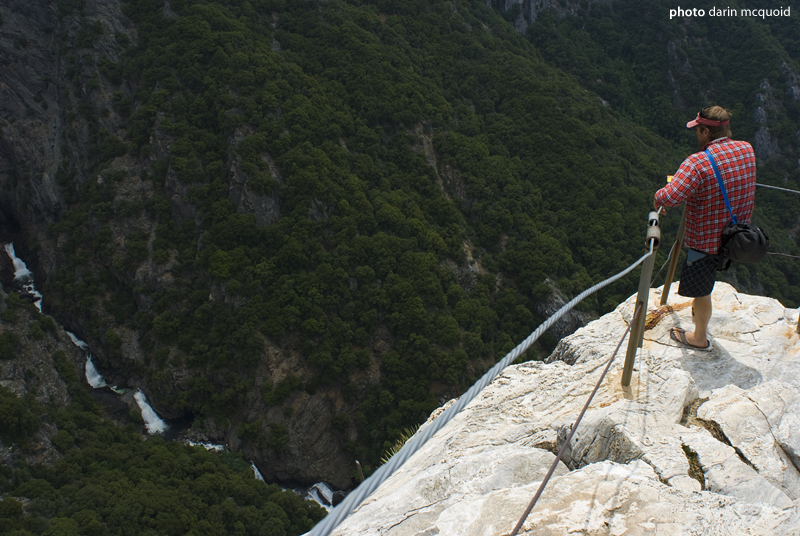 The last of the falls is where the trail from Potwisha ends. "Marble Falls" 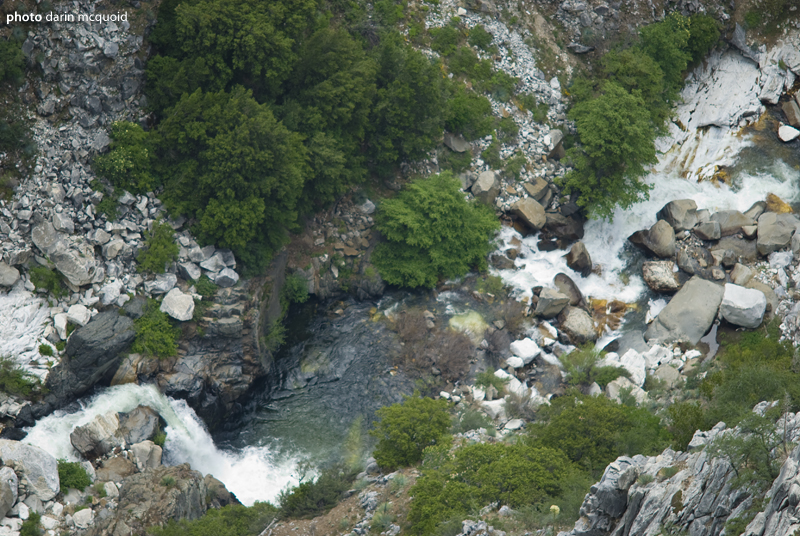 The two above Marble Falls, somewhere in the 40-60' range. 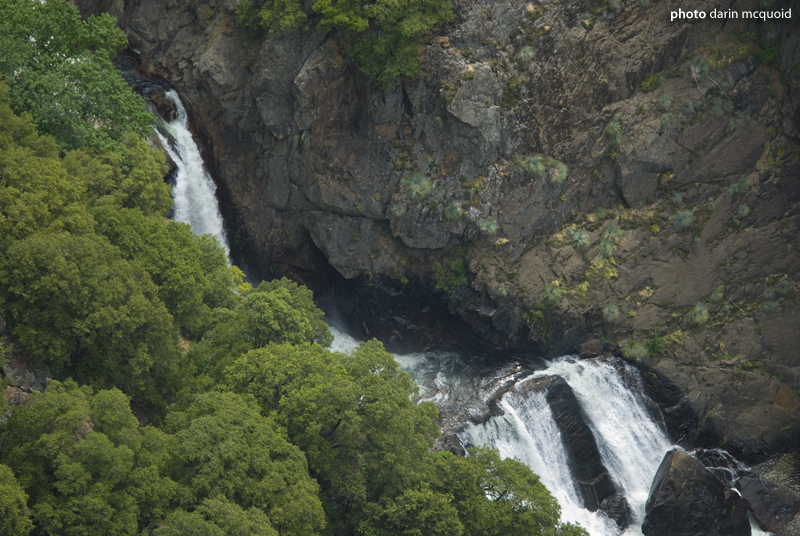 Even steeper above...we guessed they were around 30-40' each. 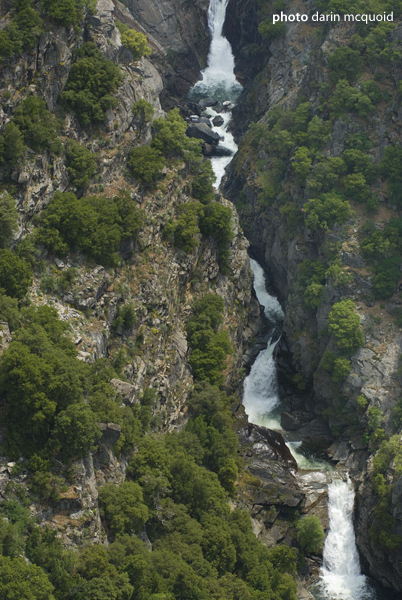 The problem...a gorged out rapid of unknown proportions, obviously quite large. 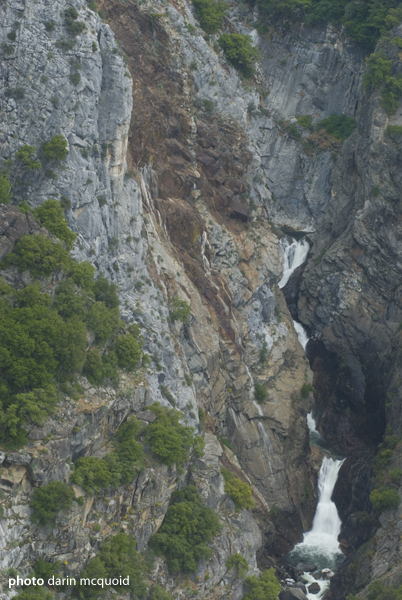 Zoomed out view of the series, quite a disturbing lack of portage options. 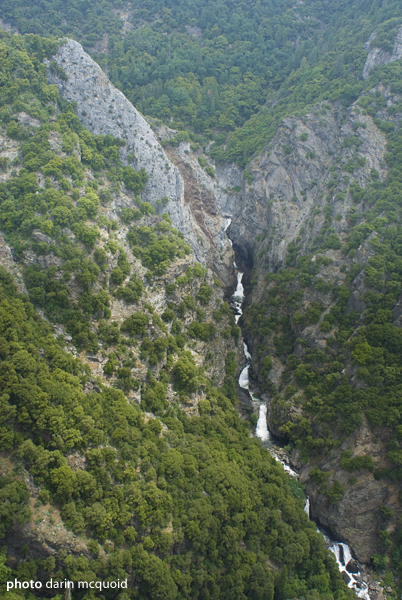 It was an easy choice to head to the Upper Middle Kaweah instead of dropping into the Marble Fork from the top. Still, we knew that we would return, this brief glimpse was too alluring. The day after our Upper Middle Kaweah trip, Ben hiked in four miles from Potwisha Campground while I rested an injured foot, and he came back with an interesting report. The trail led to Marble Falls, dropped over some sieved out boulder gardens, and disappeared into three distinct gorges. Each was visible from the trail and contained at least one large drop and several potentially manageable cascades.

We decided to go light and fast, leaving from the trailhead at six, packed for one day. Mr Stookesberry was kind enough to bring his 70 meter rope, which weighs more than the average overnight kit. Blessed by cooler than normal weather, Ben and I reached Marble Falls a little before nine am. 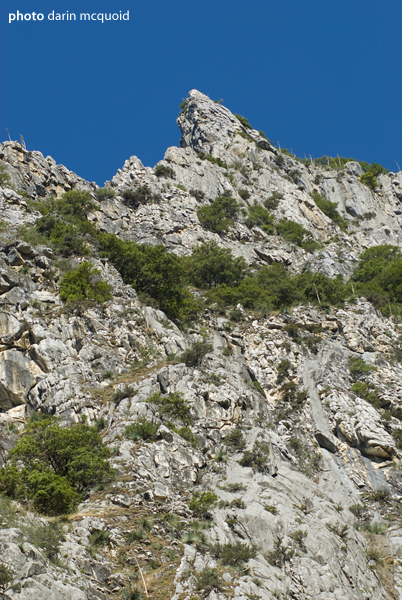 Ideally we would have waited for good lighting, but we knew time was of the essence if we wanted to get off the river before dark. I opted to probe while Ben put in the work for a great angle. I thought I would have time for a few strokes before the lip of the falls, but from the seal launch to the lip I just had time to get my balance and take one necessary right stroke to correct my angle. 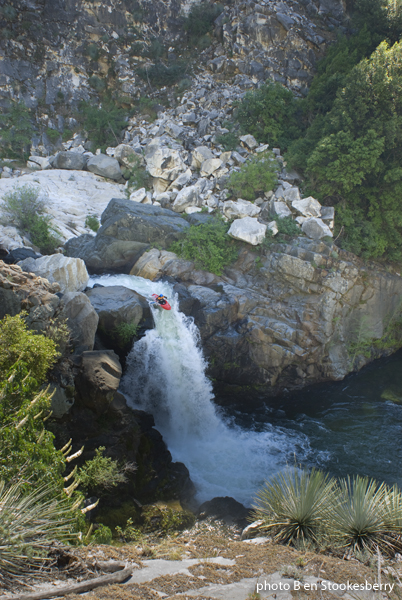 The sun peaks over the ridge line as Ben  runs Marble Falls in Sequoia National Forest. 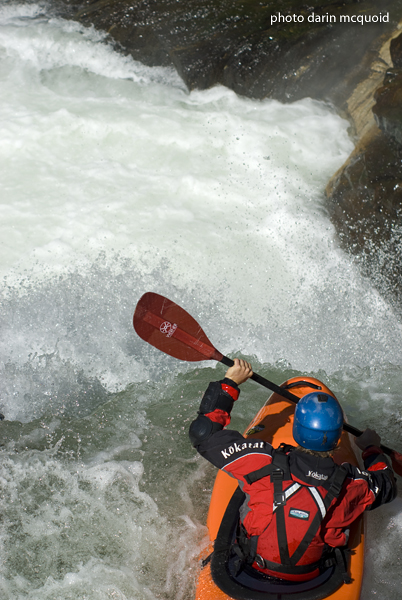 While walking on the trail around a sieved out rapid, I felt a little hesitant about dropping into the foreboding canyon. Once it there would be no easy egress. Ben didn't seem so hesitant though, and following his lead I seal launched into a pool above a portage.


The bedrock was still marble, which was tacky, a relief from other Kaweah fork polished granite. 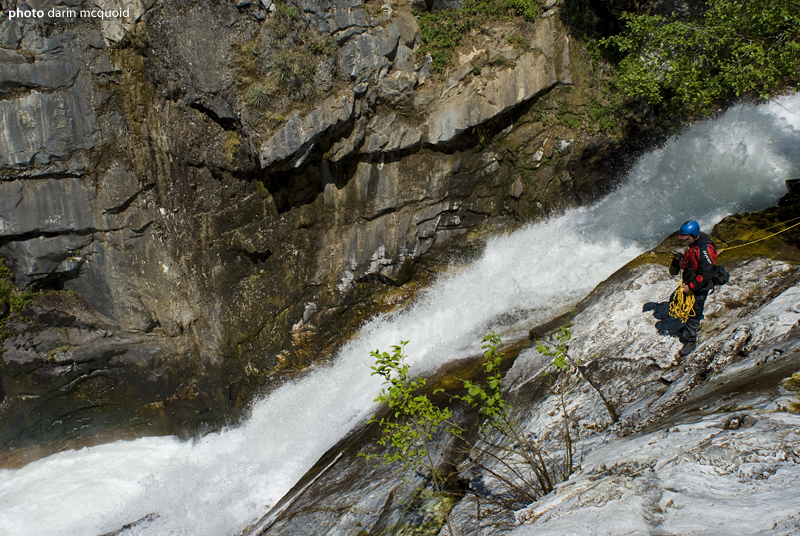 With a relatively fast portage behind us, Ben and I scouted a boulder garden and found a theme for the day. The boulder garden was full of sieves, but did have narrow line that looked neither fun nor safe, and a series of quick portages followed, until we stood at the lip of the second canyon. Apprehensive about what might lie in the canyon, we scouted each drop to make sure we could work our way back upstream if necessary. 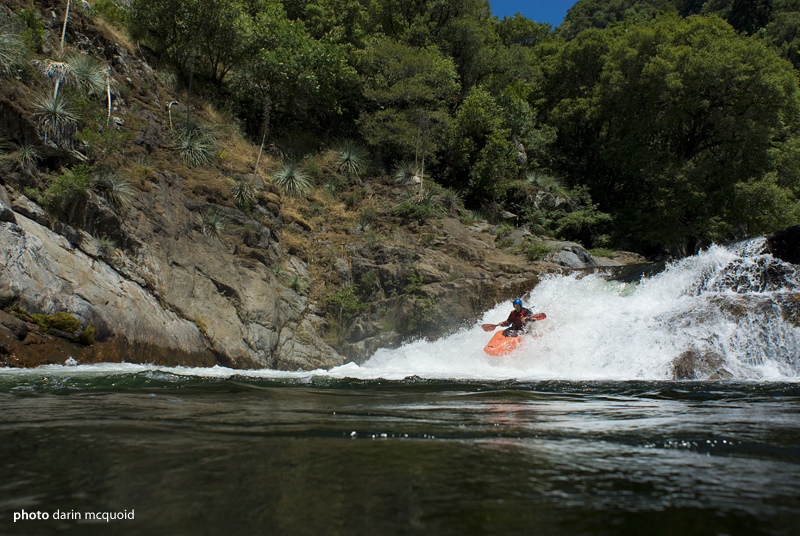 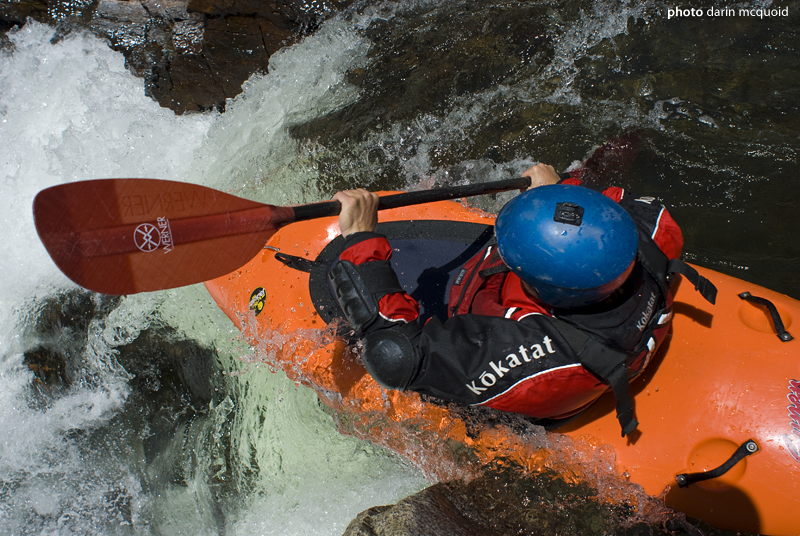 One more set leads to the big horizon we'd glimpsed from the trail. 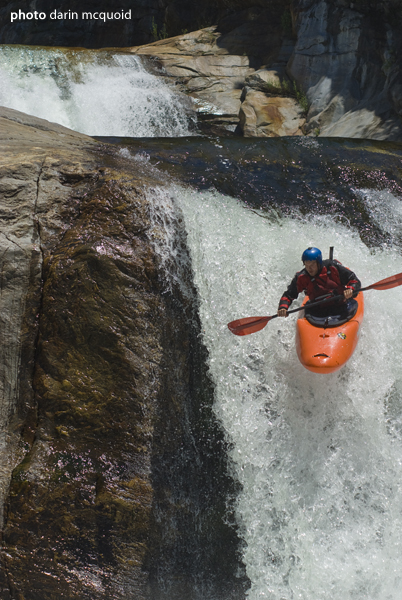 We kept our upstream escape options in mind, although the last waterfall would be much harder to escape from. Knowing we'd be more or less committing to working our way downstream. 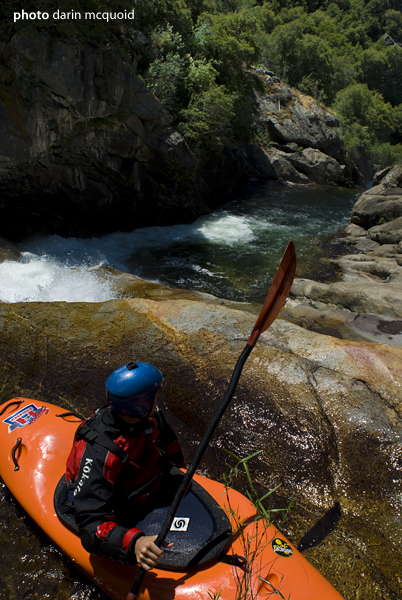 Whew she sure is big! 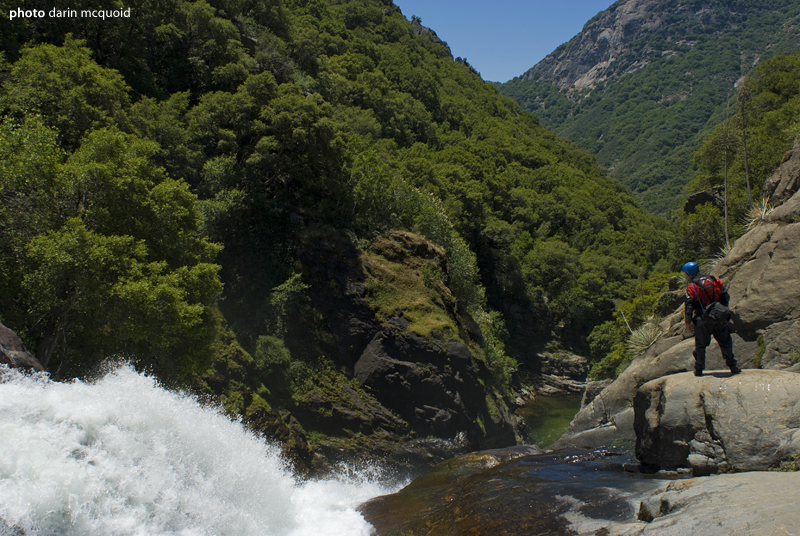 As the photograph shows, portage options were looking a little thin too. Rappelling to the base was out of the question, because it landed in a punchbowl, then went right down a canyon into a sieve.


Not that I was debating running this hundred plus foot drop anyways. 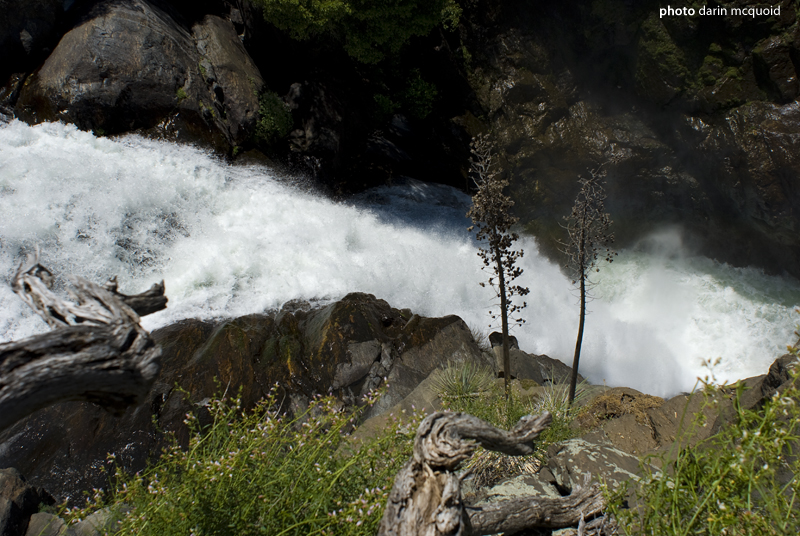 We then set out to find the best route for us to get around the beast, eventually returning to our kayaks an hour and a half later. We were glad to have found a way around that didn't involve any technical rope work, although we would have to rope our boats seventy feet up a steep scree field, then simply traverse through the poison oak forest and drop through "the green door" a nice, fairly open draw that led down into the heart of the canyon.

Another hour and a half later, we were only too glad to jump in the water and cool off, marveling at the beauty of the canyon and conscious that we might just be getting into an unplanned overnight stay. 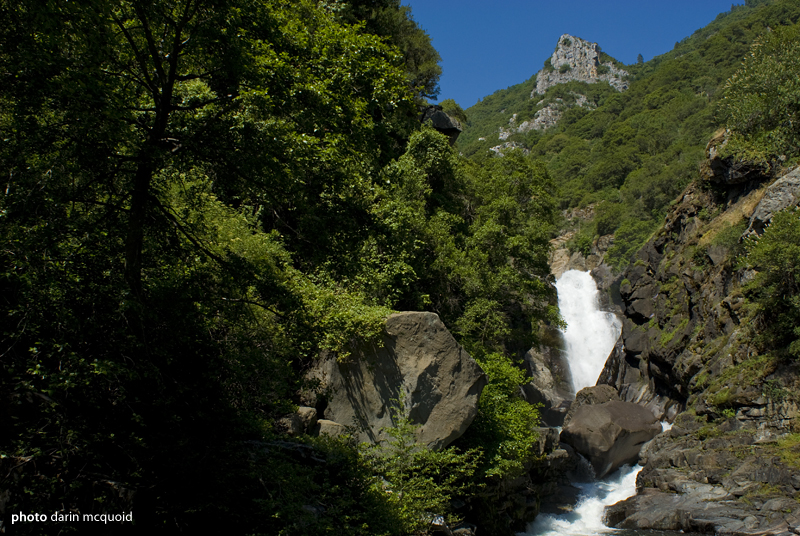 It was time to push on again, off we paddled into the third canyon. The bedrock had changed between the canyons, any trance of marble was gone. What we now had was something we'd achieved familiarity with in far Northern California: Metamorphic bedrock, always a little chunky but fun too.


Sliding, bouncing, and a little bit of water turn into good times. 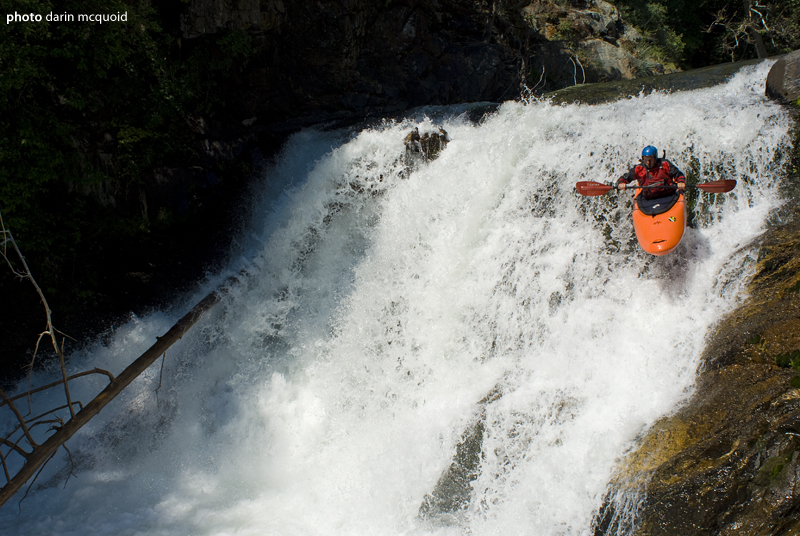 From above the gorge looked like it could be full of technical rope work, but to our relief the slides were going quite well. 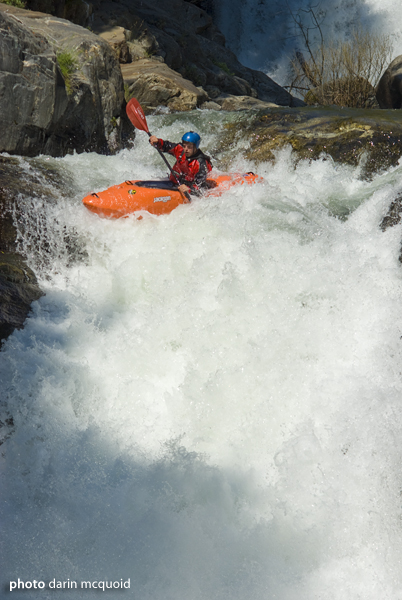 From Ben's scout we knew there would be a big slide in this canyon. Finishing off the slides we scrambled for an eddy. Out of our boats we only had to walk ten feet to see that, amazingly, it went. The slide certainly was big, but there was no reason it would not go. There was a potential piton in the middle at the top, but after that the slide opened up, curved to the right and banked in that direction too.

Tired from our already long day, I gave it a thumbs up and hopped in my boat. I tried to drive left in entrance, but my bow was still pushed too far center and I took a small piton, but resurfaced upright and took off down the rest of the slide. It was only too apparent that the slide was steeper than it looked from the top, and I was going really fast as I hit what had appeared to be a roller, and launched in the air. Thankfully the slide was banked, and I was flying down the middle of the slide, bracing for impact, landing in a soft splash in the aerated base of the slide.


Wide eyed, I looked back up at Ben and gave him two thumbs up with a big grin. I marked where I took off and landed in this photo of Ben. 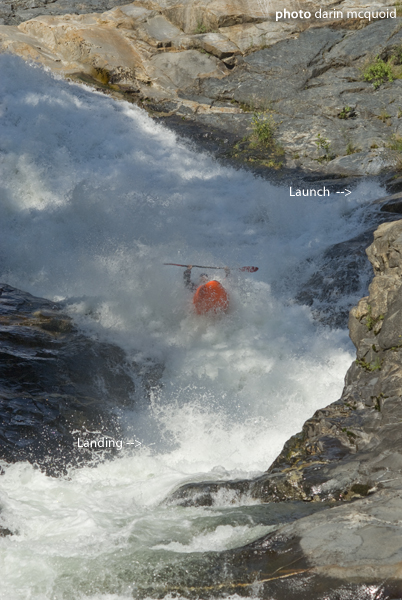 Ben  drove harder left in the entrance, where a pillow pushed him back to the center and away from the roller. Ben Stookesberry, the slide is longer than it looks, he has already dropped about 20' 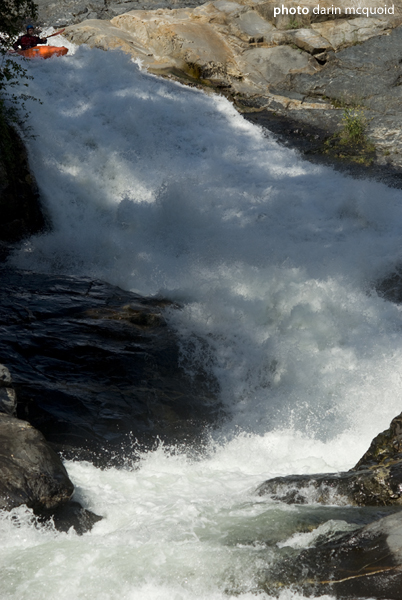 Through the bottom holes.

Refreshed from the fun slide, we put our blades in the water and pushed downstream into an incredible amount of portages around sieved out boulder gardens. We got into the grove of it when suddenly the earth dropped away again. 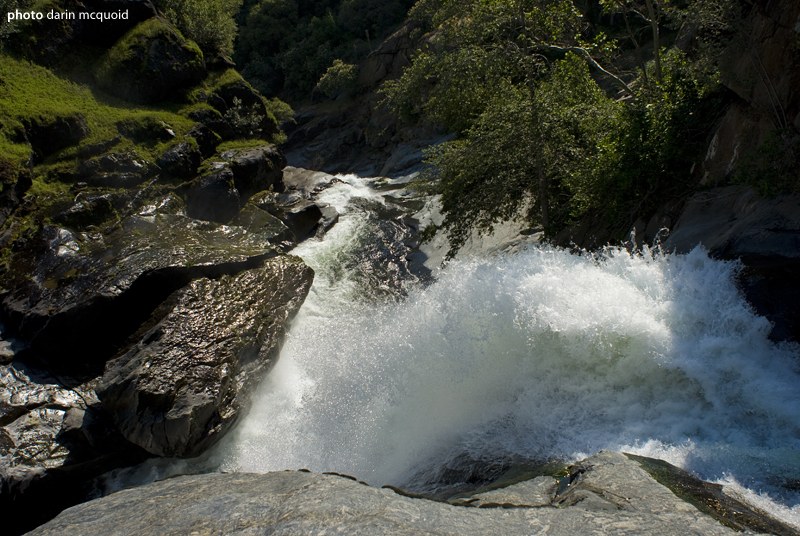 To our delight this portage, although of a similar sized set, only took about twenty minutes. A slide on the left side had lodged in the ravine, creating a nice set of shelves to walk across. Without these the portage would have been henious.


Dwarfed by another Marble Fork cascade. 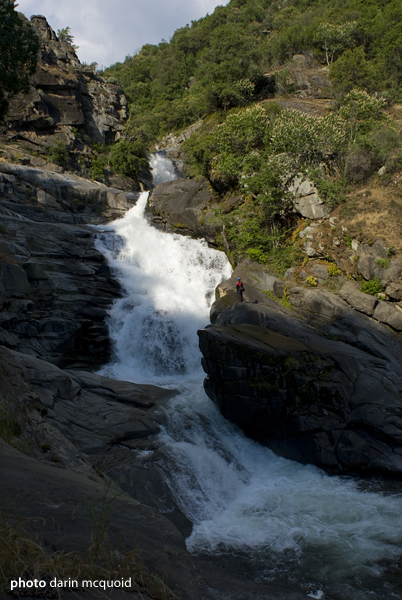 Light was starting to fade as we hauled our boats around countless nasty boulder gardens. I couldn't help but gaze at the left bank dreaming that the diversion would show up around every corner. The diversion continued to elude my wishes, but again and again we portaged around sieves, until suddenly I stepped out of my boat onto smooth granite to scout another big set.

A perfect twenty foot slide into a short pool followed by a thirty foot slide transitioning into a horizontal launch pad. We shook our heads in amazement at the cleanest large drop of the whole Kaweah, hidden between terrible boulder gardens.


Taking one last look before embarking down the slide. 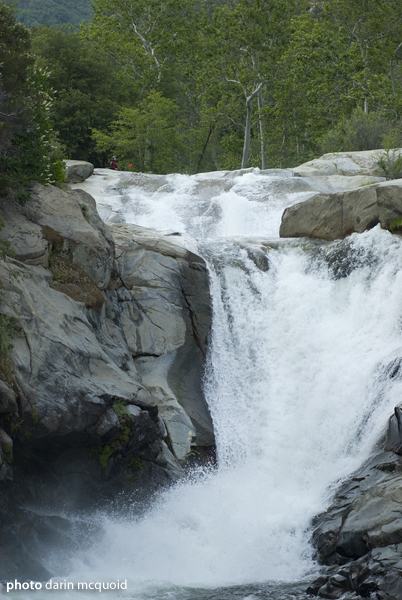 About to make a high speed transition. 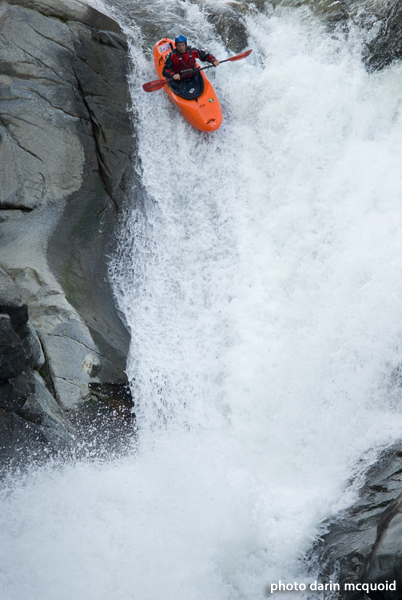 We cruised across the pool below the slide and embarked on another of what was to be many more portages around sieves and undercuts.


Light fading fast, one last piece of bedrock on the Marble Fork. 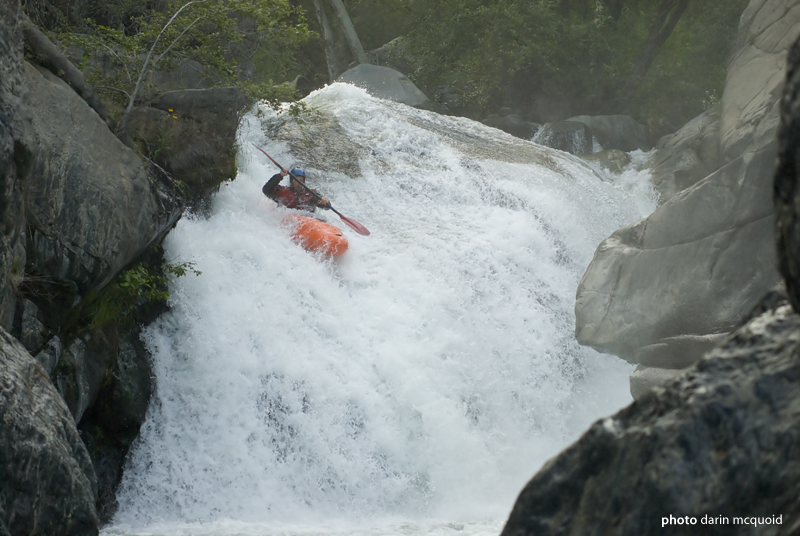 We grunted through the portages, ran some mank and were exhausted by the time we finally reached the diversion at eight pm. Not too much time to spare! 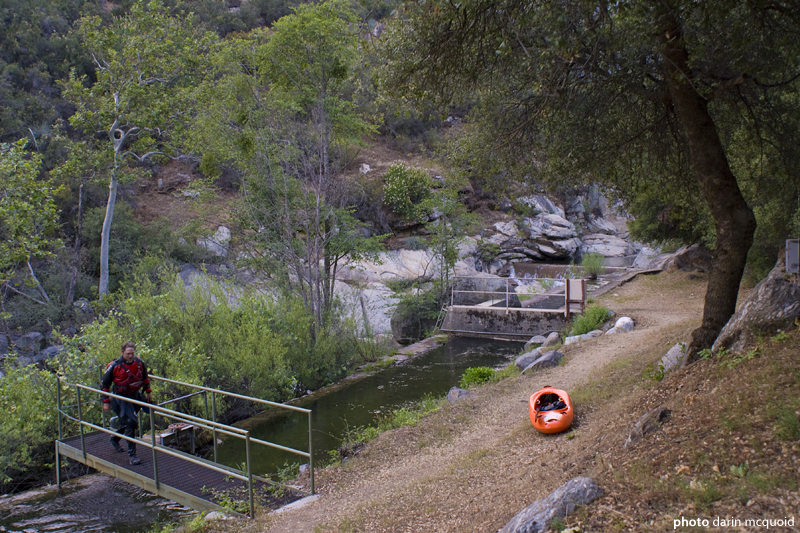 Was the Marble Fork worth doing? The good drops are wonderful, and the in between is equally terrible. It might have the worst portage to fun ratio of any run that I'd return to...yet I would return to it. Probably not every year though, and certainly not for multiple laps!