With the rest of California being dry as it typically is in the fall, Dave Maurier made the drive up north to meet me for some kayaking in the Smith drainage. The Smith River drainage is the only completely free flowing drainage in California. All forks flow from their source to the sea with no dams at all, a total of about 320 miles of free flowing rivers.

We rolled into the drainage around noon on Friday, with rain coming down and water levels coming up a bit. Knowing flows were low the previous day, we opted for the Middle Fork because we had heard it goes at lower flows than other runs. After a quick stop in Gasquet, (locals pronounce it “Gas-kee”) we were off to find a put-in. Just outside of town we saw a bunch of boaters on the water and hopped on with a group comprised of people from Oregon. The first several miles were class II-III with no remarkable features except for waves that were great for wave trains. Eventually we got to the Oregon Hole Gorge and things picked off with a nice class III rapid. Immediately after this rapid most the group eddied on the right, with the leader eddying out on the left in a smaller eddy. Dave started to ferry across surprisingly low, and about ¾ of the way across, realized he wasn’t making it. As Dave disappeared over the horizon line my interest in the rapid picked up. I ferried across and got beta that it was just a big long rapid, so I went for it. As I dropped in I couldn’t see over the wave right in front of me and picked up speed as I went down the middle. Cresting the first wave I saw a hole on the left and punched through it, exiting in a long tail stand, looking at the sky and wondering what was next downstream. Just as I was getting my boat leveled off and under control I hit another small hole and rear endered into a quick rodeo roll, proceeding down through the run out. This rapid is “Fire hose” and reminded me quite a bit of “Gaping Maw” on the Cal-Salmon, without a left side. I paddled down to Dave who was eddied on the right, and found that he had a similar run as well. I grabbed my camera and headed up the cliffs to get a picture, of the Oregon crew running it. 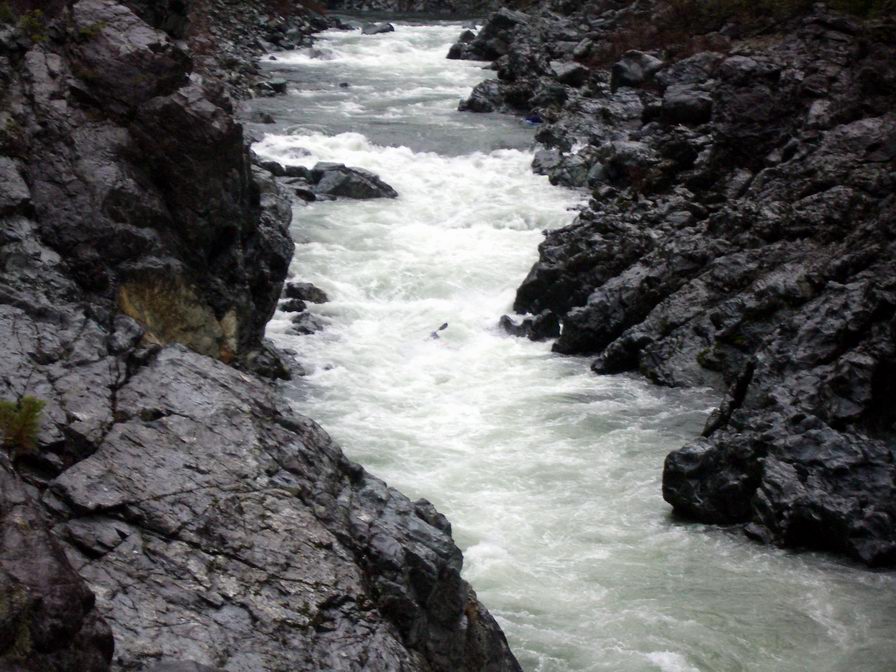 Samantha on the same rapid. 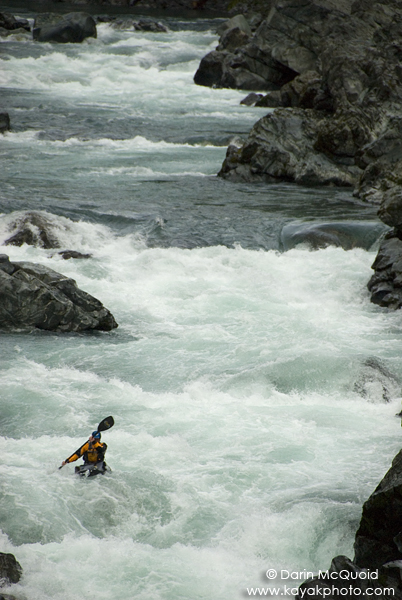 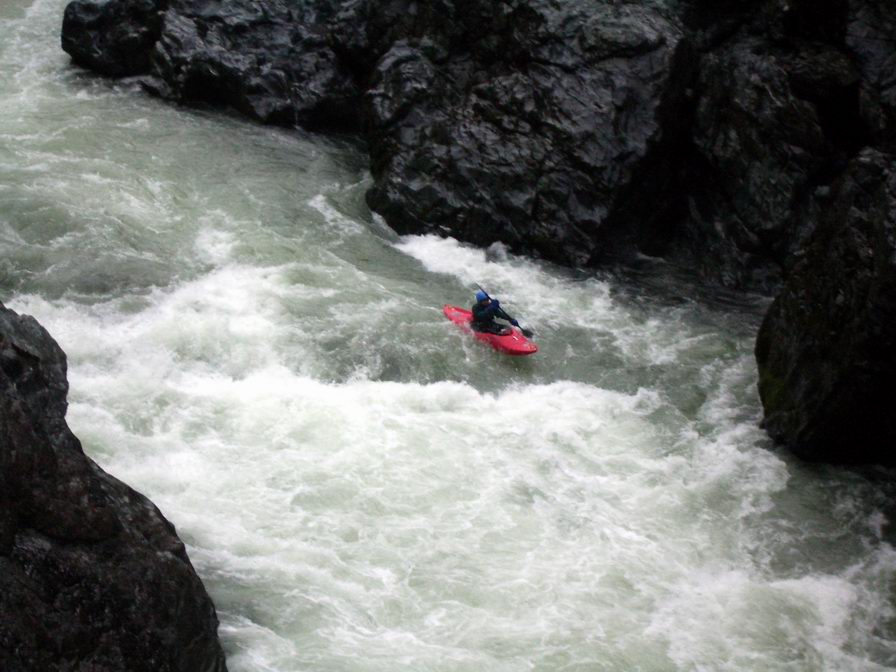 Right after Fire Hose was a fun swirly rapid, followed by a bit of flat. The next rapid had a few large rocks at the top, with a nice large entrance ramp on the left. From the eddy it looked good to me so I charged down the ramp driving right with Dave close behind. Thankfully we drove right on the entrance, and continued that way seeing a very large wide hump on the left. It turns out this is the famed “Oregon Hole”. We eddied out and watched two of the group run the rapid, one brushing the edge of a hole, both working much harder with their longer boats in the quick turn. As the last member of our group dropped in she was angled a bit too much to the left, and paddling a much longer old boat. As Megi turned and started to paddle back to the right she was unable to break across the current, and we quickly learned how the Oregon Hole got its name. Dropping sideways into the hole she disappeared for a second and then resurfaced deep in the trough getting a bumpy ride. This quickly changed into a brief moment upside down followed by several ends in the 10’+ boat. Megi gave a good fight and swam quickly after this, taking one recirculation and flushing out of the right side of the Oregon Hole.


Nate running Oregon Hole at lower flows, it's obvious where the rock ledge creates a big hole at higher flows. 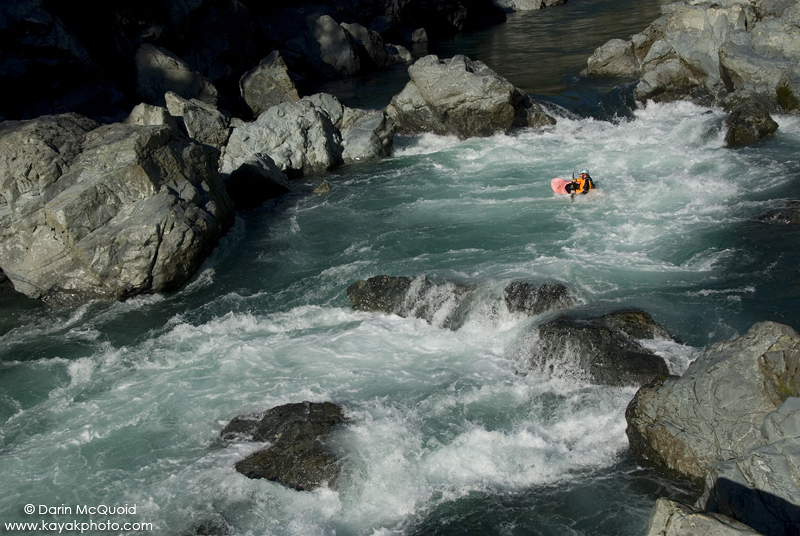 We regrouped with everyone feeling okay and finished the class II paddle out of the run. I think the only thing lacking about this run is the length, the gorge is tragically short, and is really only three major rapids. I’d give the gorge a solid class IV rating. Later in the weekend we ran it again and put in at a river access that is signed Oregon Hole Gorge. This is the preferred put in, giving you a quick warm up of two rapids before the gorge. You could easily do laps putting in here. Shuttle directions are both easy to figure out and in the Holbek & Stanely guide.