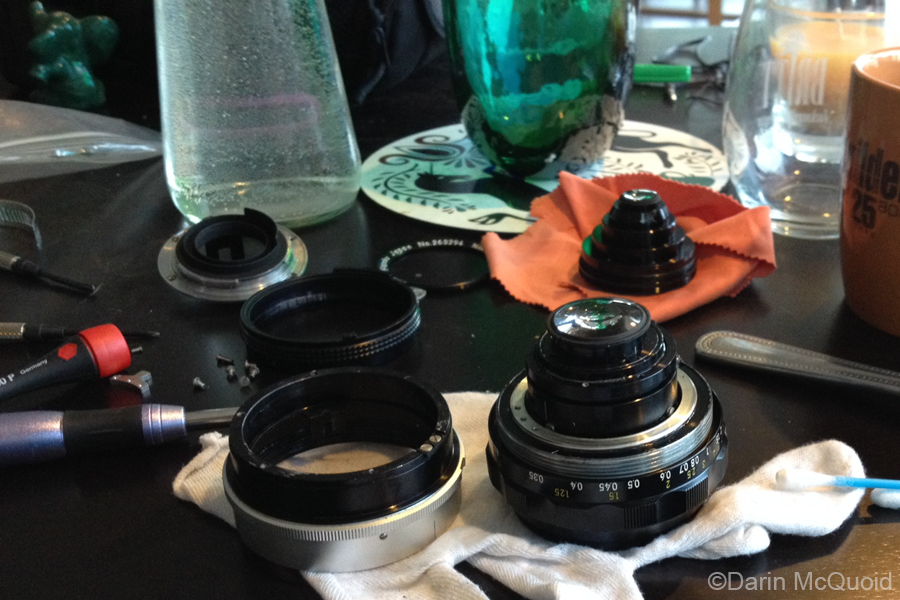 It's not shocking that a lens this old needs the focusing ring lubricated. This particular copy was made somewhere between 1967 and 1971, making it forty-two years old at the youngest. I could find no information available online for repairing this lens, and thought I'd share what I learned as it has some hidden tricks. This is Nikon's first lens with Close Range Correction. I did not split the inner focusing helicoid and have heard it's a nightmare to put back together - you really need to know what you're doing. As you can see above I also removed the front element group which is not necessary for servicing the focusing helicoids. What grease to use is up for debate. Some ebay sellers actually have some of the original Nikon greases. Contrary to popular belief not all Nikkors focus the same. Generally AI lenses are stiffer than AI-S, and in my experience Pre-AI lenses are all over the place because many were serviced during AI conversion. Theoretically by choosing the right grease you can have your lens focus more like an AI or AI-S lens, depending on your preference. These are just tips from my experience on this lens and assume you have the right tools like JIS screwdrivers and some basic knowledge of what's trying to be accomplished. 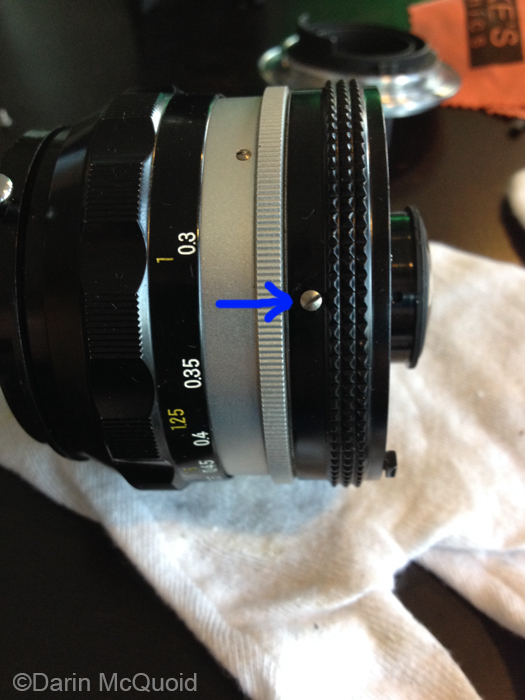 3. This is where I ran into a wall, and started poking around trying to figure out how to separate the outer focusing helicoid. Inside the lens is a metal tab held in place by three slotted screws. This metal tab physically stops the lens from focusing past minimum and infinity focus. Depending on how the focus and aperture are set it's often hidden by a black sliding metal piece that can be pushed out of the way. Remove the three small slotted screws and tab.
To the right you can see the metal slider pushed off to the side. 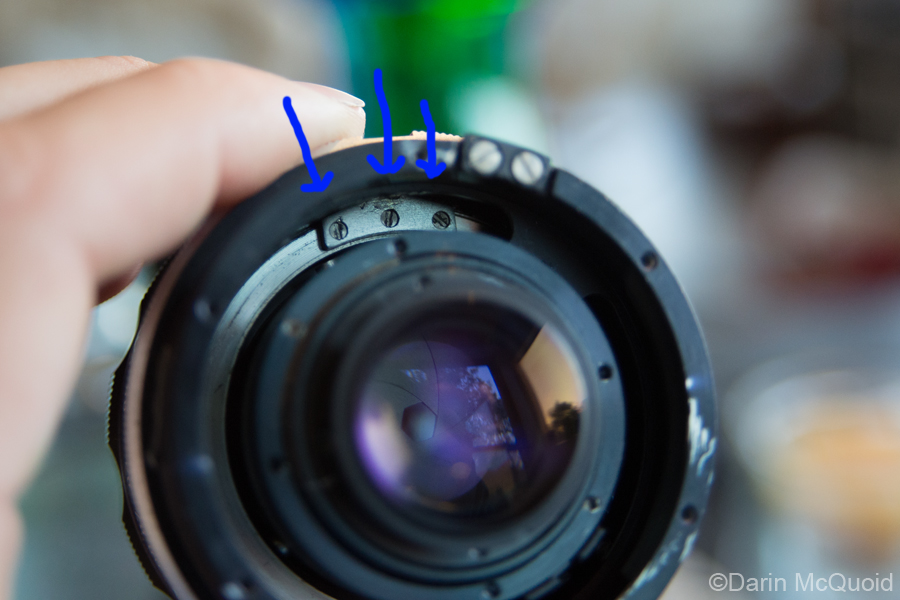 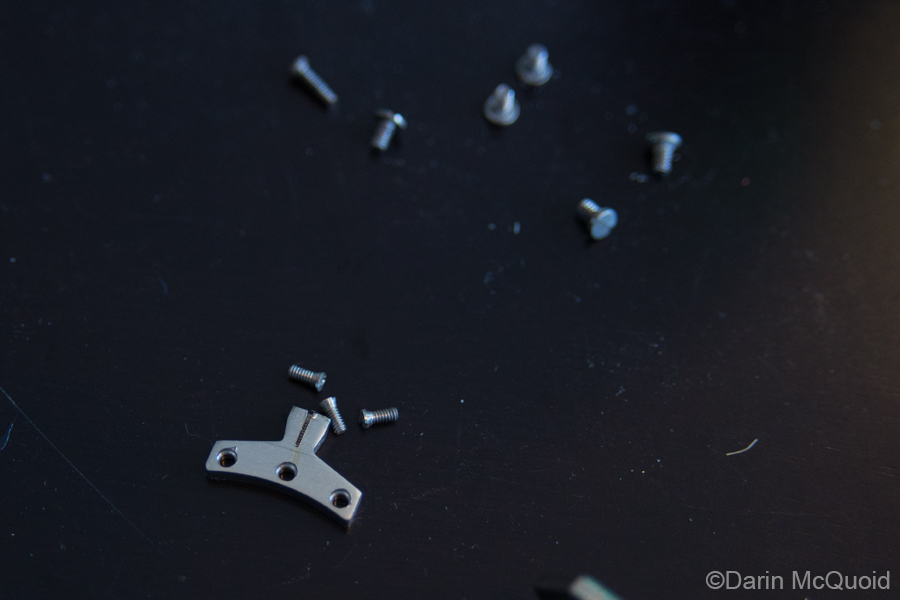 I took pictures along the way as I progressed. Here you can see the helicoid threads showing, and my particular copy came apart with the infinity mark matching the depth of field scale. A good way to mark the separation point is with pieces of tape on each part. 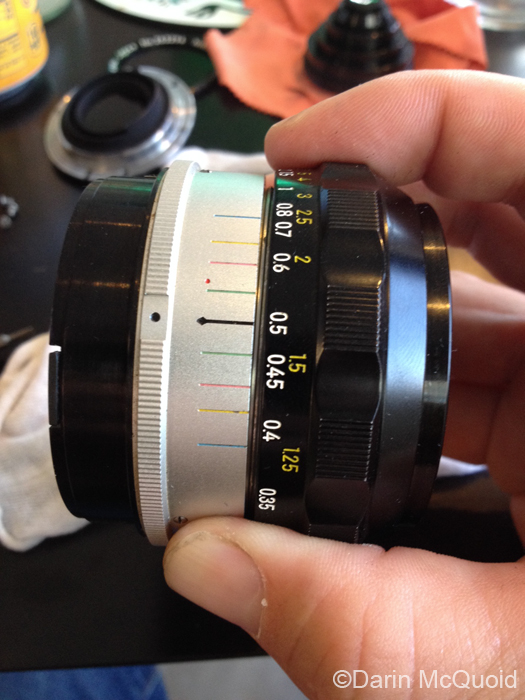 Thread the focusing ring / outer helicoid back on where marked. It's counter-clockwise to thread on. Just get it started, don't put it all the way on. Locate the aperture adjustment levers. That's right, on this lens there are two aperture adjustment levers. One is wider and makes an obvious connection with the lens mount that we took off on step one. The other is a small silver screw sticking out. Using a small screwdriver you can slide both to the fully closed position. The silver screw has more friction than the wider lever. 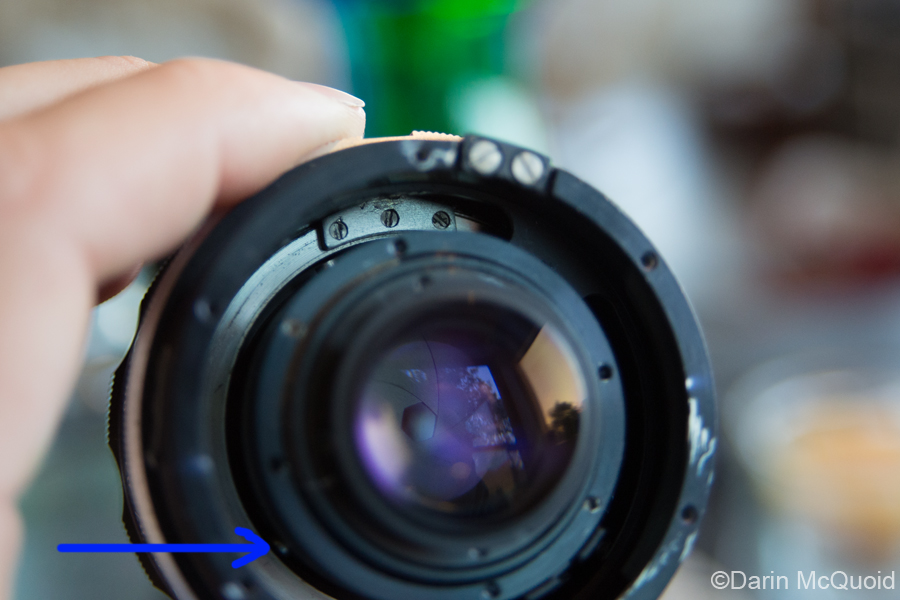 Now remember that sliding tab fork thing that we may have had to move out of the way earlier? When screwing the lens back together you must keep that fork aligned over the silver aperture screw. The aperture ring screw we took out in step two connects to this fork, thus controlling the aperture.

This has to stay aligned over the protruding silver aperture screw when threading the helicoid back together. Turn the threads a little, slide the tab over the screw, repeat until the screw is locked between the forks. 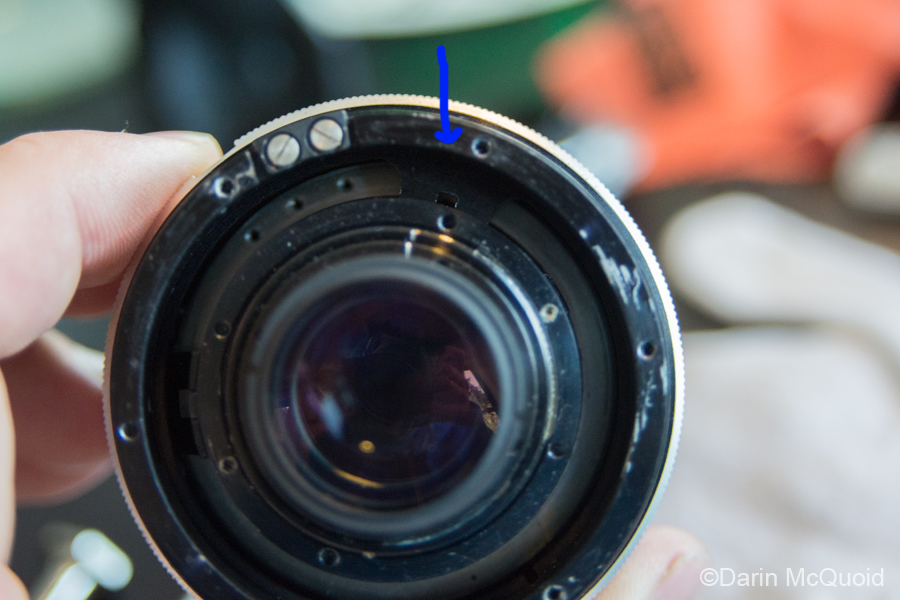