The standard run on the North Fork Kaweah is a 4.5 mile adventure from Yucca Flat to Paradise Beach. It's a fine run that's often overshadowed by the Middle Fork Kaweah. It's road to road, yet has some logistical snaggles. About half the shuttle is dirt road, and rather tough at times. While a high clearance vehicle isn't necessary, it's nice to have, especially something of the four wheel drive variety if there has been recent rain. Take-out is on BLM land that's closed, and there are no parking signs everywhere. Generally speaking, if it's still early in the year one can just park near the gate for Paradise Beach with no problems. Later in the season when the grass is dry there is too much fire danger and you may very well get towed by parking anywhere above the last bridge over the North Fork Kaweah.

In general the river is class IV with a few harder rapids and one waterfall that's an easy walk if so inclined. Anything can be portaged, although some will be a bit of a slog through boulders and poison oak. Trees are always a hazard, as the run is somewhat continuous in nature and has trees growing in the riverbed.

Zack Quick brings his A-Game for the shuttle. 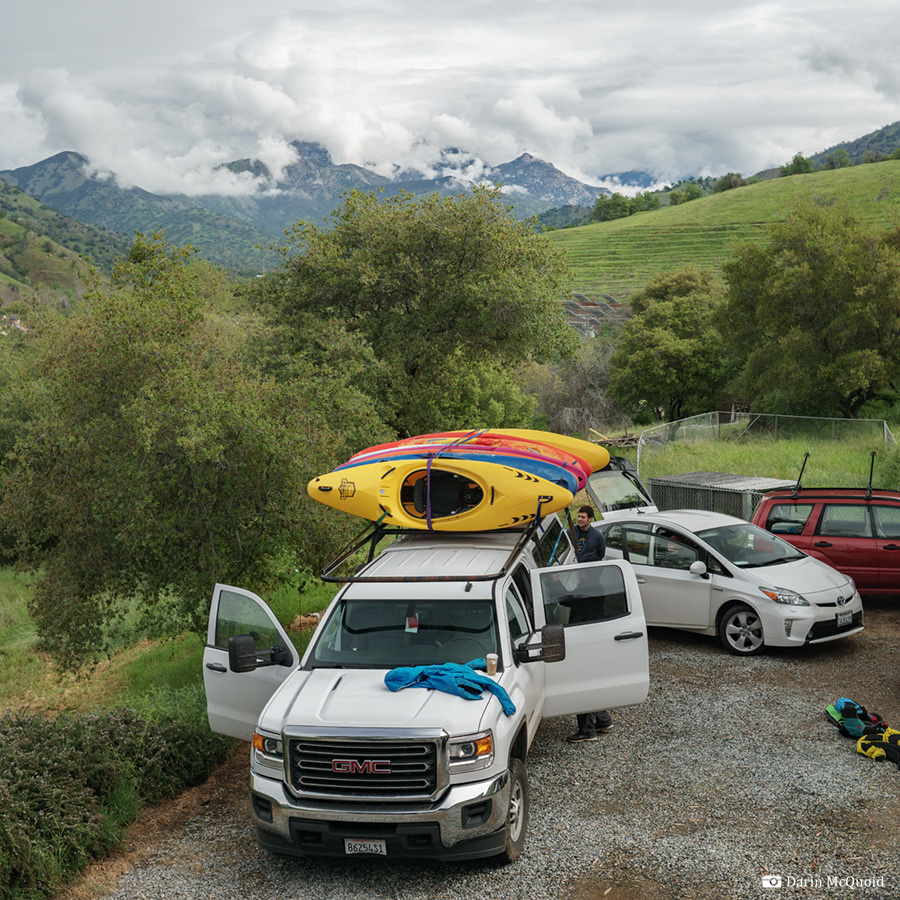 Scenery on the North Fork Kaweah is a strange mix of Yucca and lush green hills - at least early in the year. 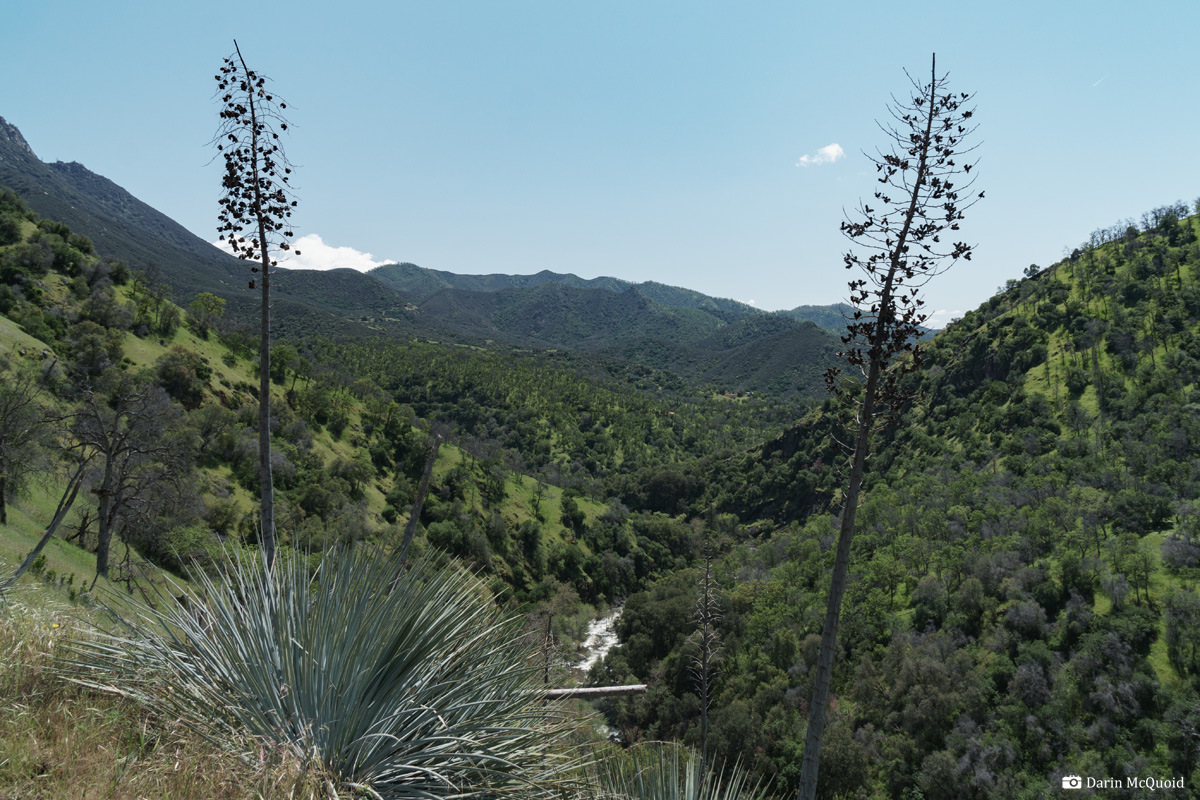 At Yucca Flat there is plentiful parking just within Sequoia National Park, and easy access to the river.


Shannamar Dewey strolling down to put-in at the confluence with Yucca Creek. 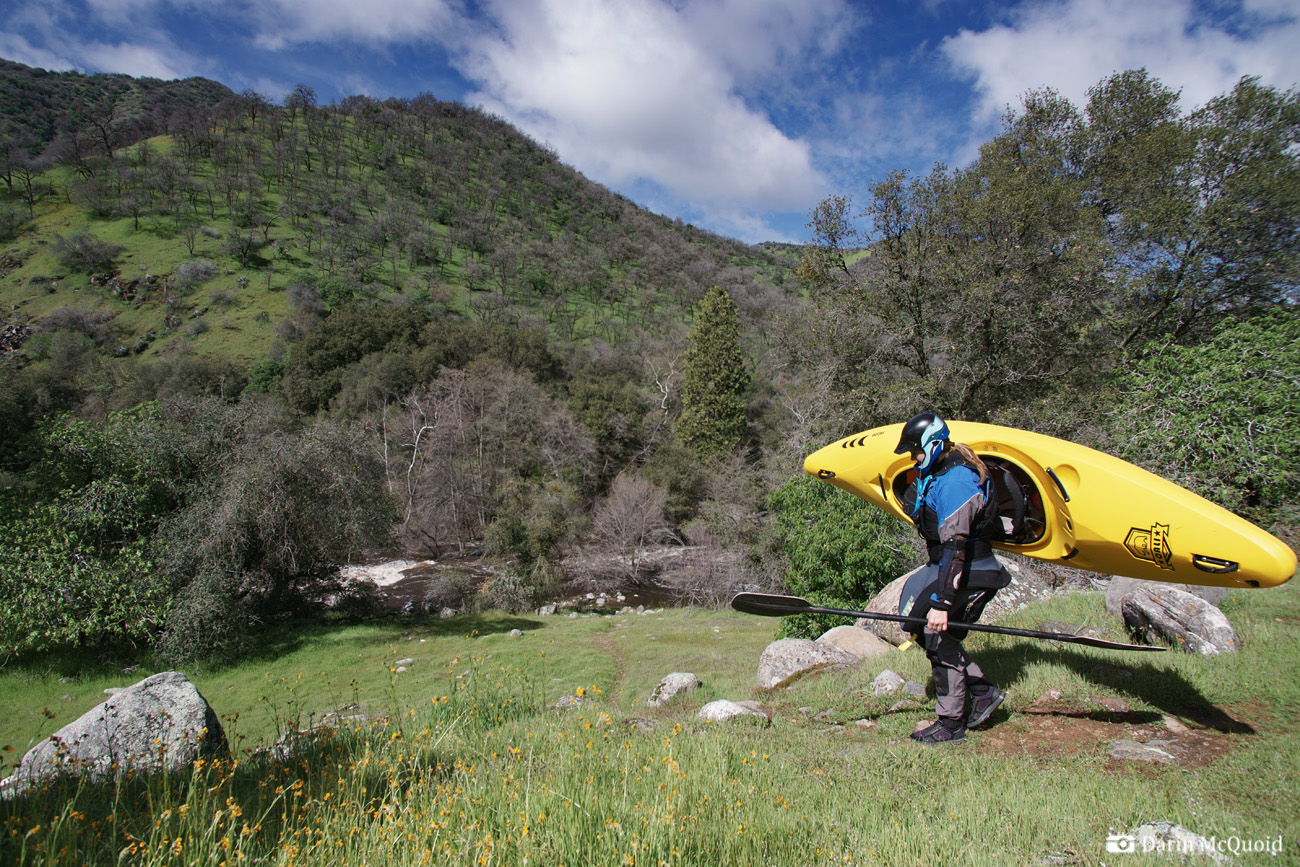 The first major rapid is a bit out of character and visible from the shuttle road. Cody Beach takes the right line, while the center is more common. 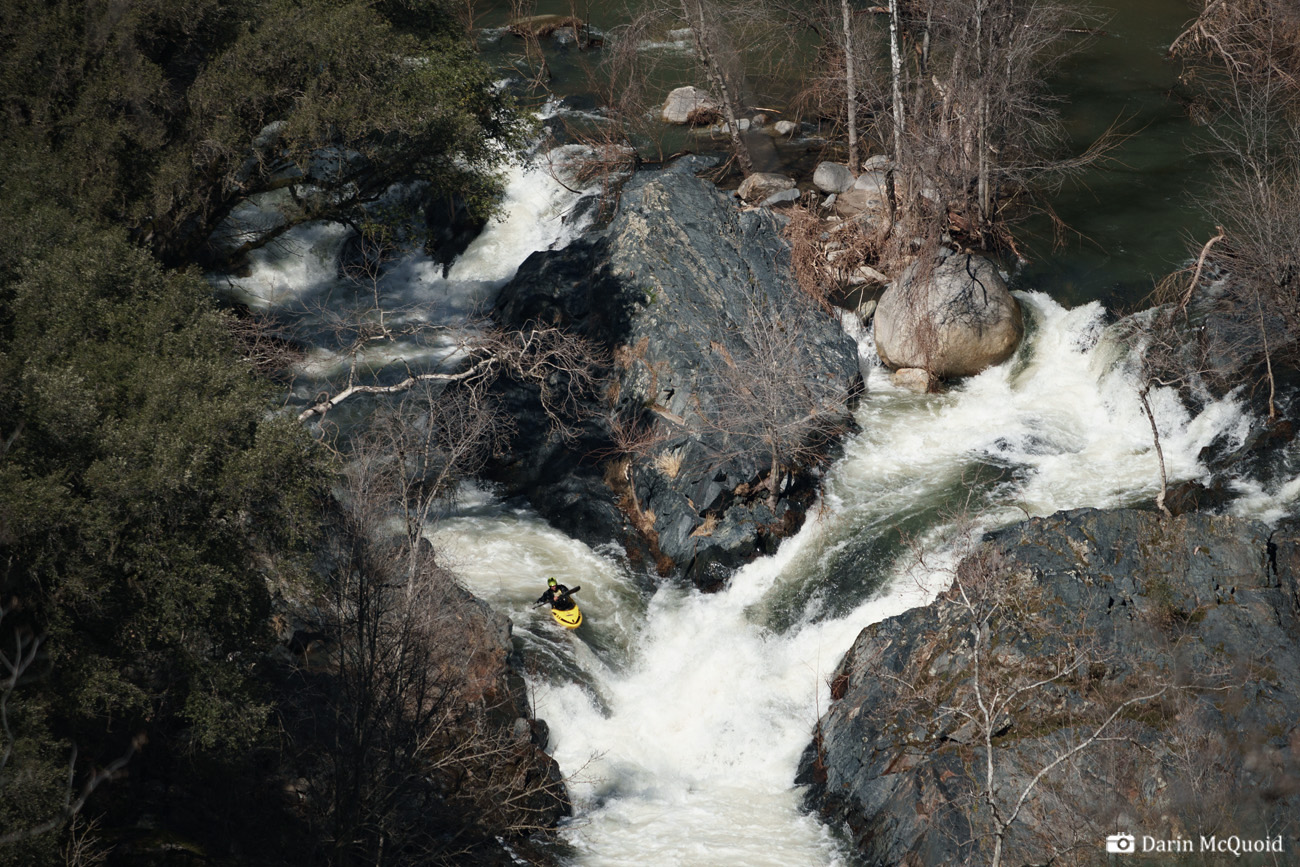 Thomas Perkins runs the same on a higher flow trip. 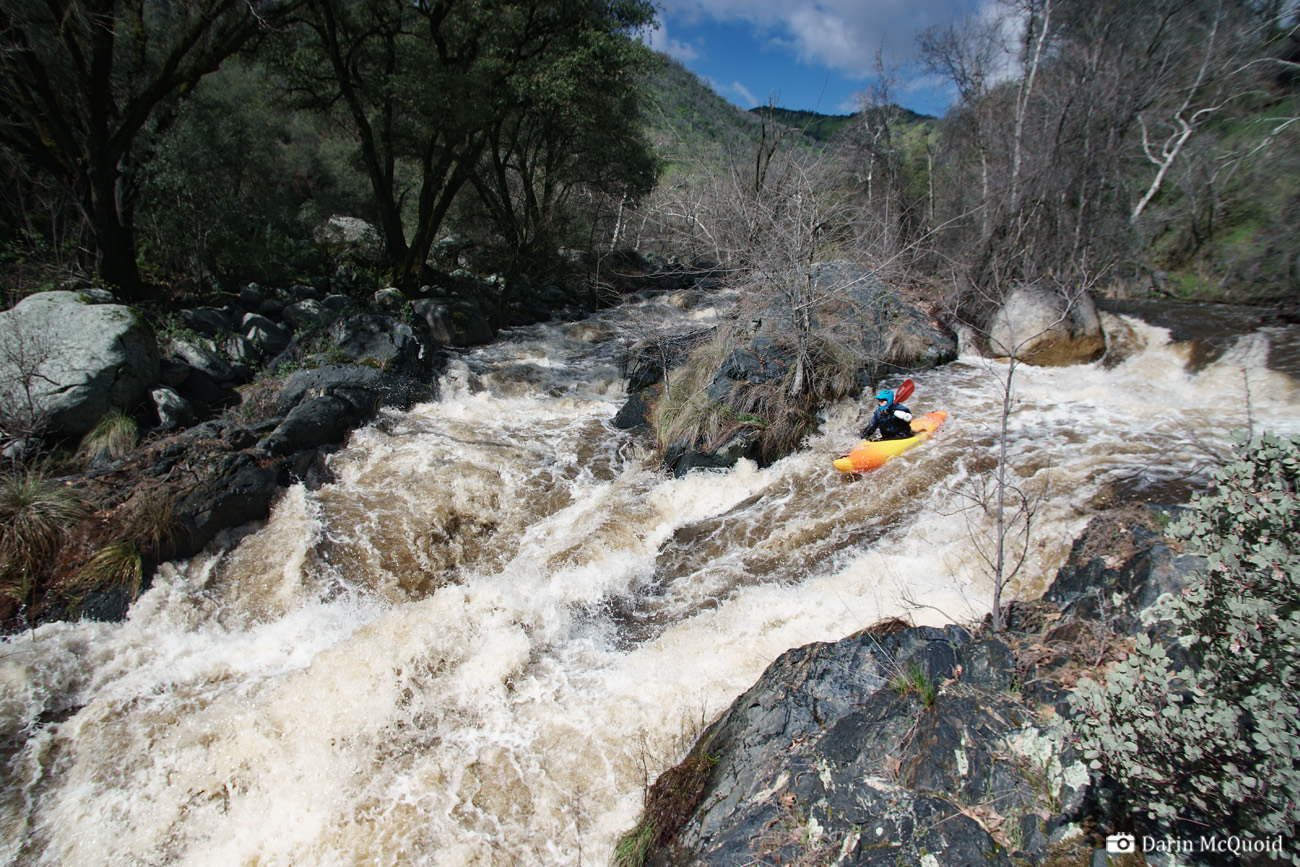 Cody Beach and David Kissane in some of the boogie water on the North Fork. 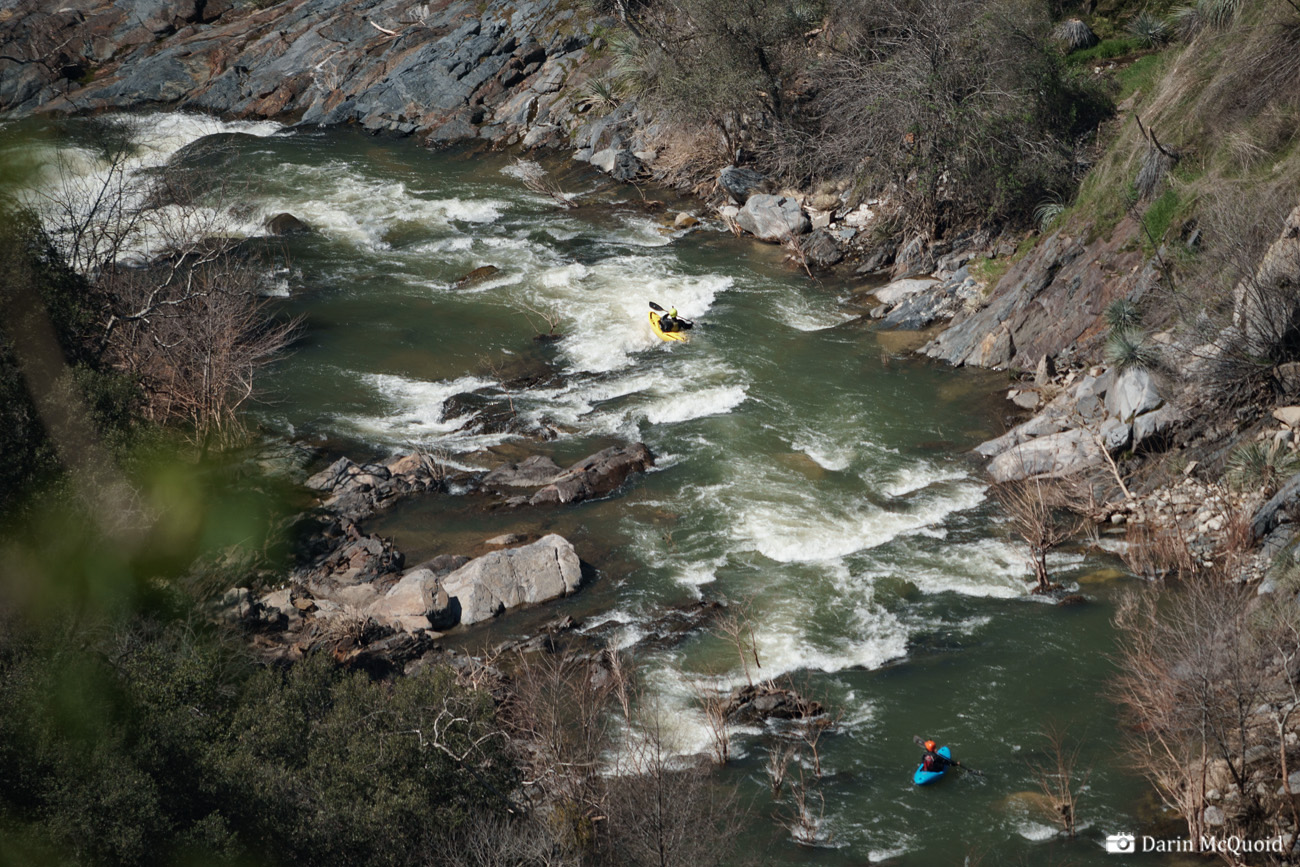 Class II has a way of leading into IV or IV+ on the North Fork Kaweah. Shannamar Dewey in "Accelerator". 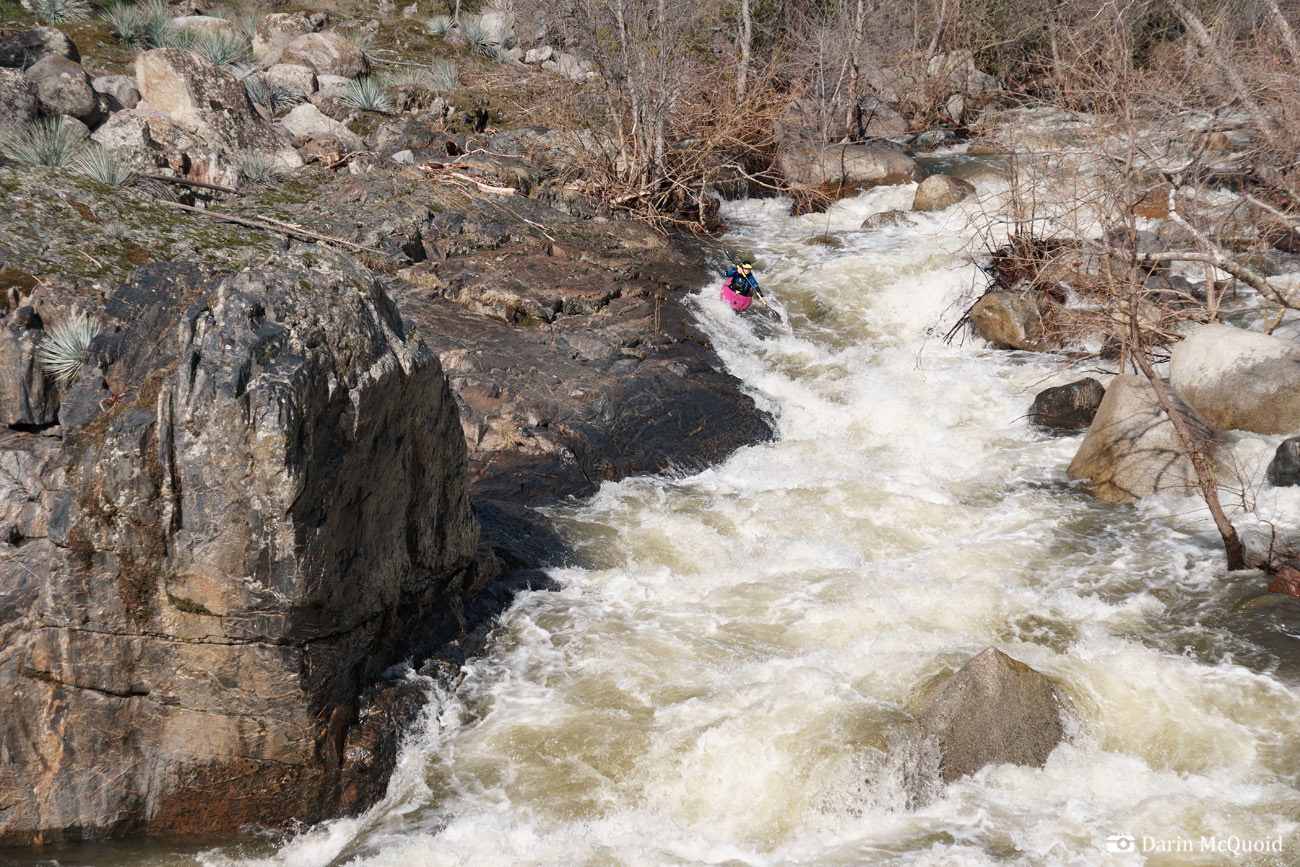 The run is predominately boulder gardens, but at the halfway point is Cherry Falls, a clean thirtyish foot mandatory plug. The horizon line is obvious, although it takes active paddling to catch the eddy on river left. The portage is easy, and there is an access trail to the road at this point. 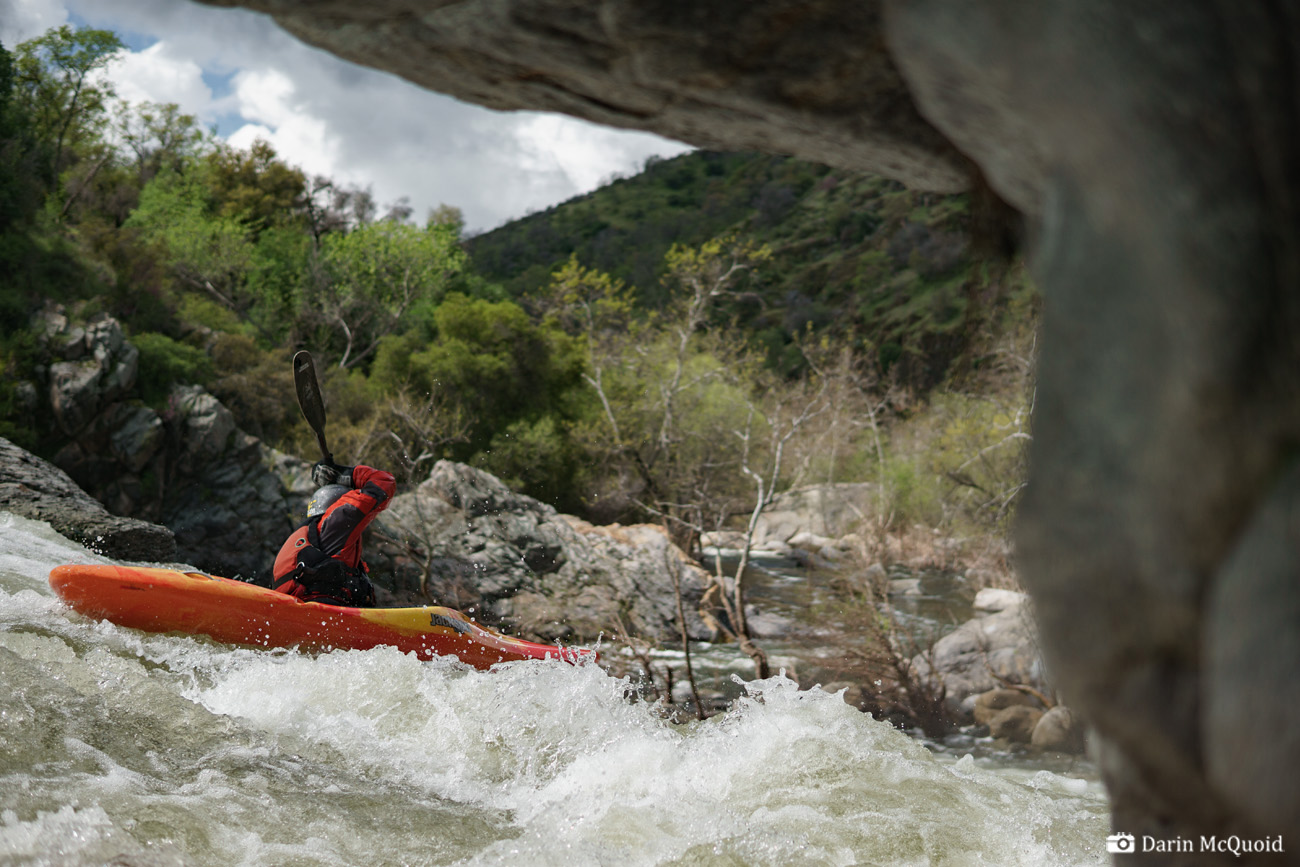 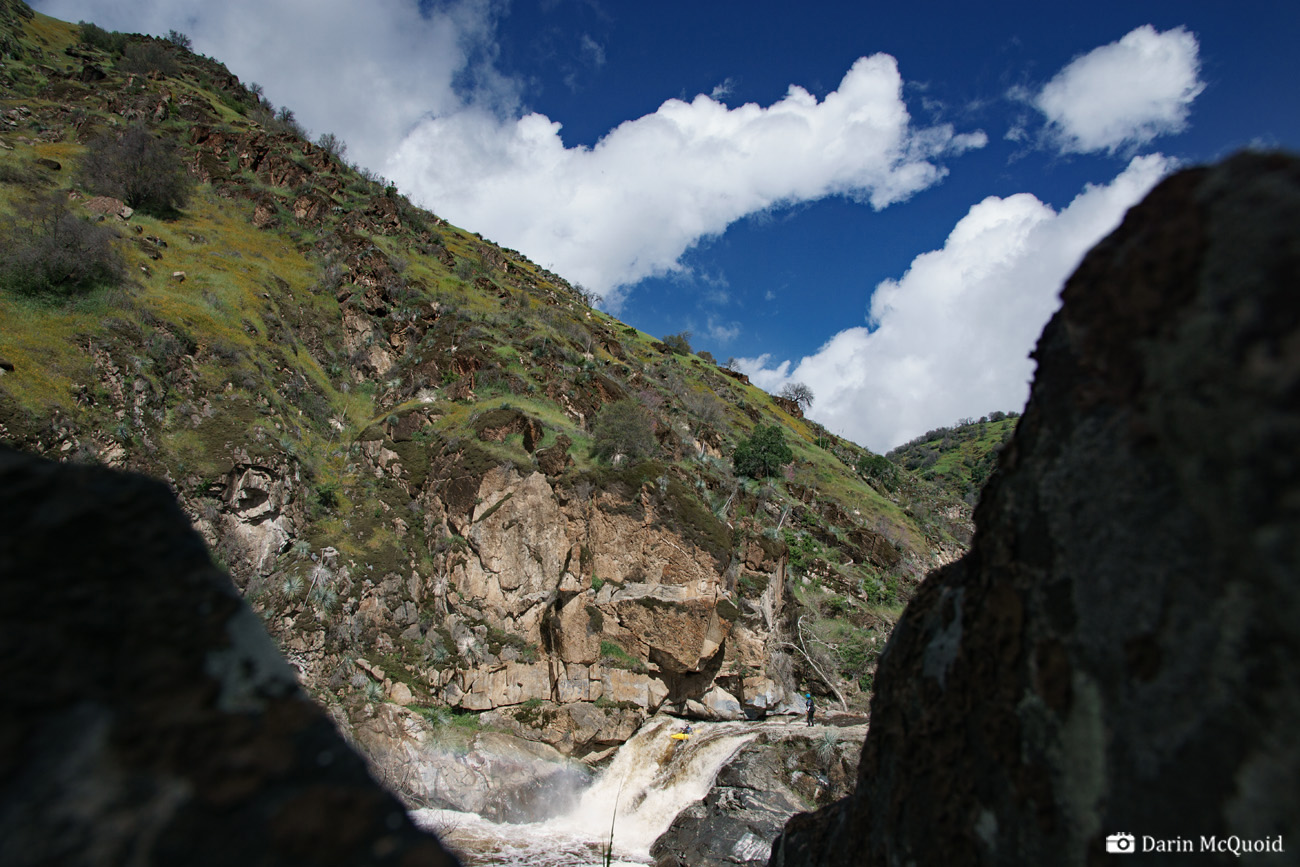 Cherry Falls is rather notorious for imploding skirts and stealing paddles, so Ben May rafts it. 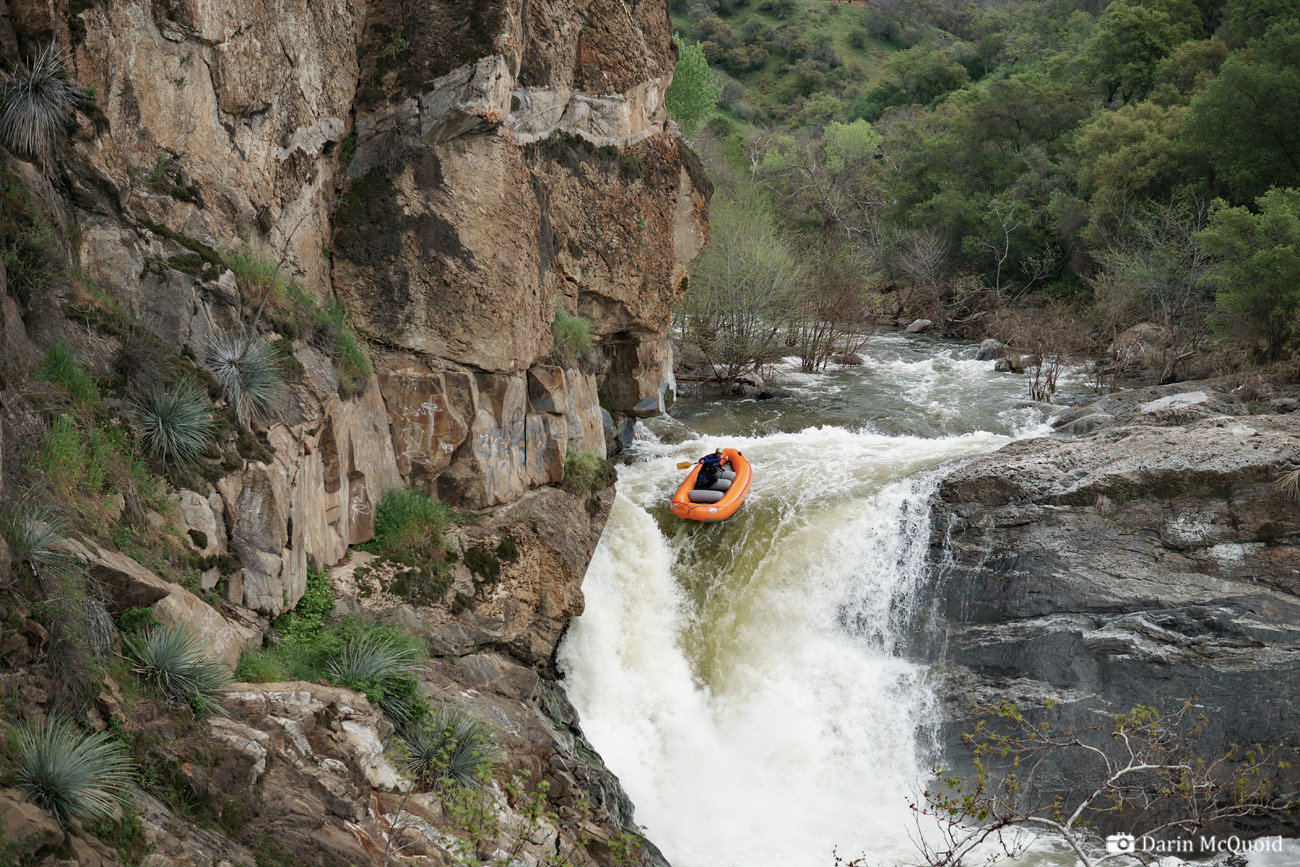 Below Cherry Falls, the North Kaweah gets harder for about a mile - it doesn't look like much but I've seen this little hole surf two people and both spent some time making rounds in the hydraulic, which is surprisingly retentive. Phil Boyer gets left of the final hole in "Twisted Sister". 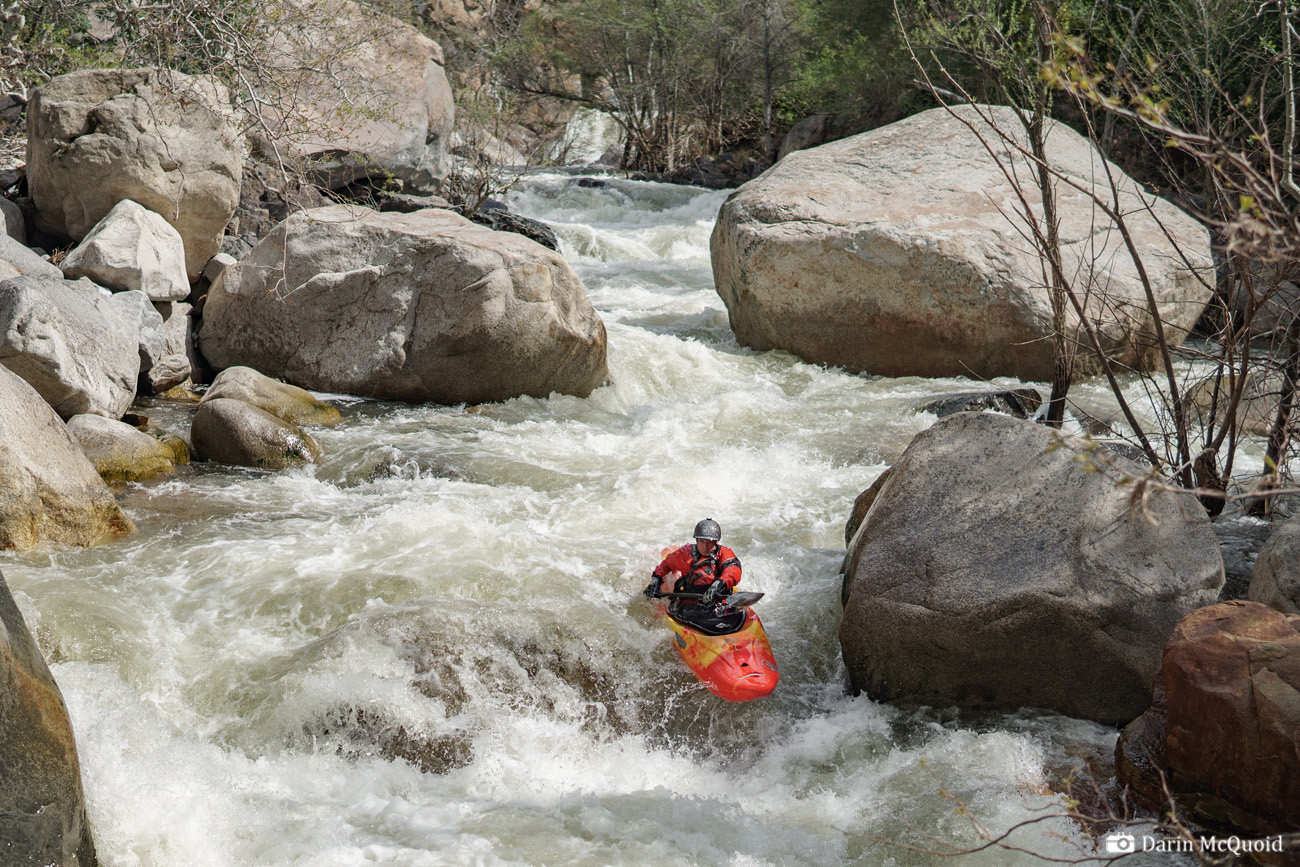 Immediately below is a dam "Reach and and Find the Surprise". We've had better luck going as far right as possible where it cascades over a boulder pile instead of dropping all at once. Below, somewhat continuous rapids lead up to Diagonal. 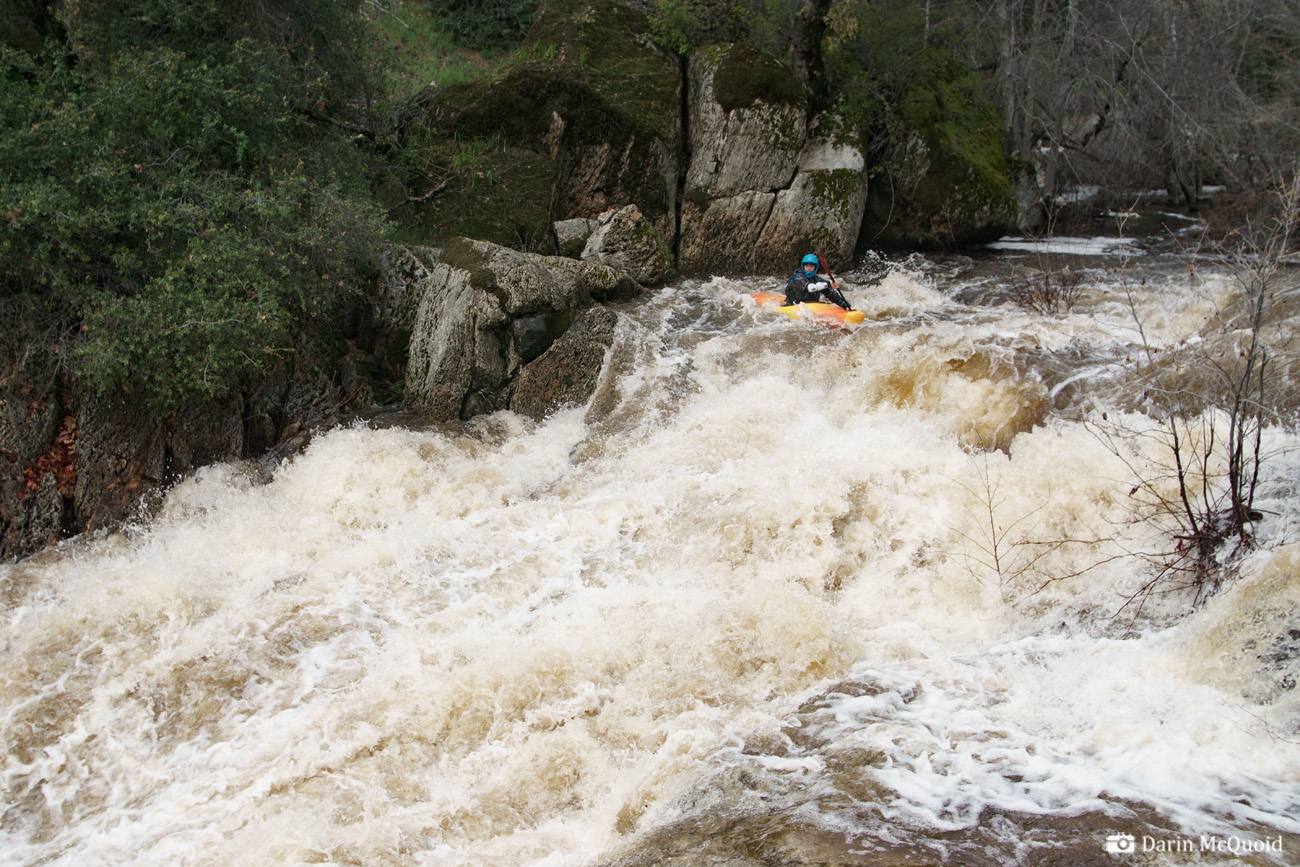 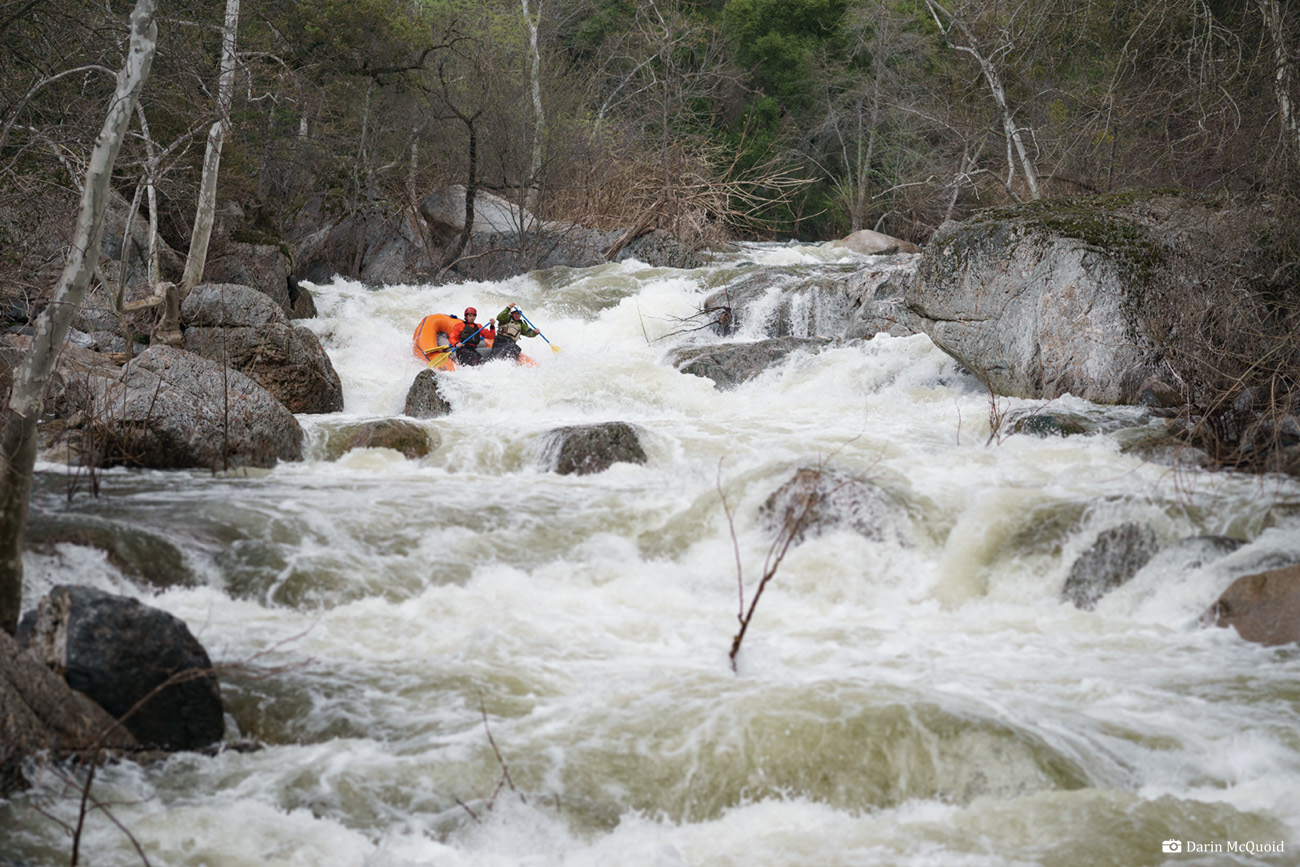 It's only a short distance down to "Hole in the Wall", a rapid prone to causing swims, thankfully into a large pool. Gavin Reiser. 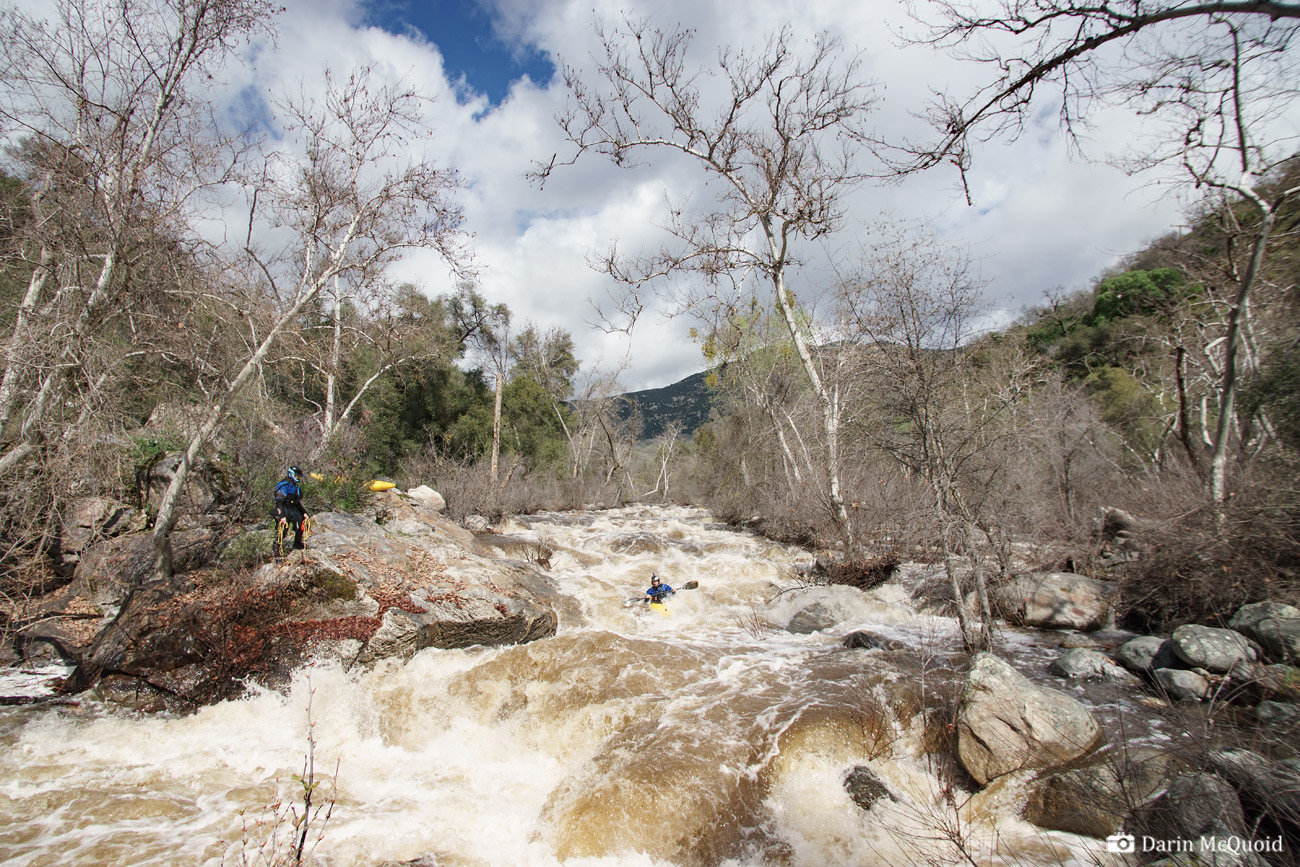 Below "Hole in the Wall" is the old Advance site, and a trail up to the road. For the next half mile the river resumes a III-IV character and is fun boogie down to Paradise Beach. It's not much of a beach, but it's a great take out. The North Fork has a wide flow range, I typically judge my flows off the main Kaweah River gauge and have done it from 1,000-3,000 on the gauge.  Because most of the drainage is south facing, it tends to flow earlier than the South Fork and as a result, run out of water sooner. 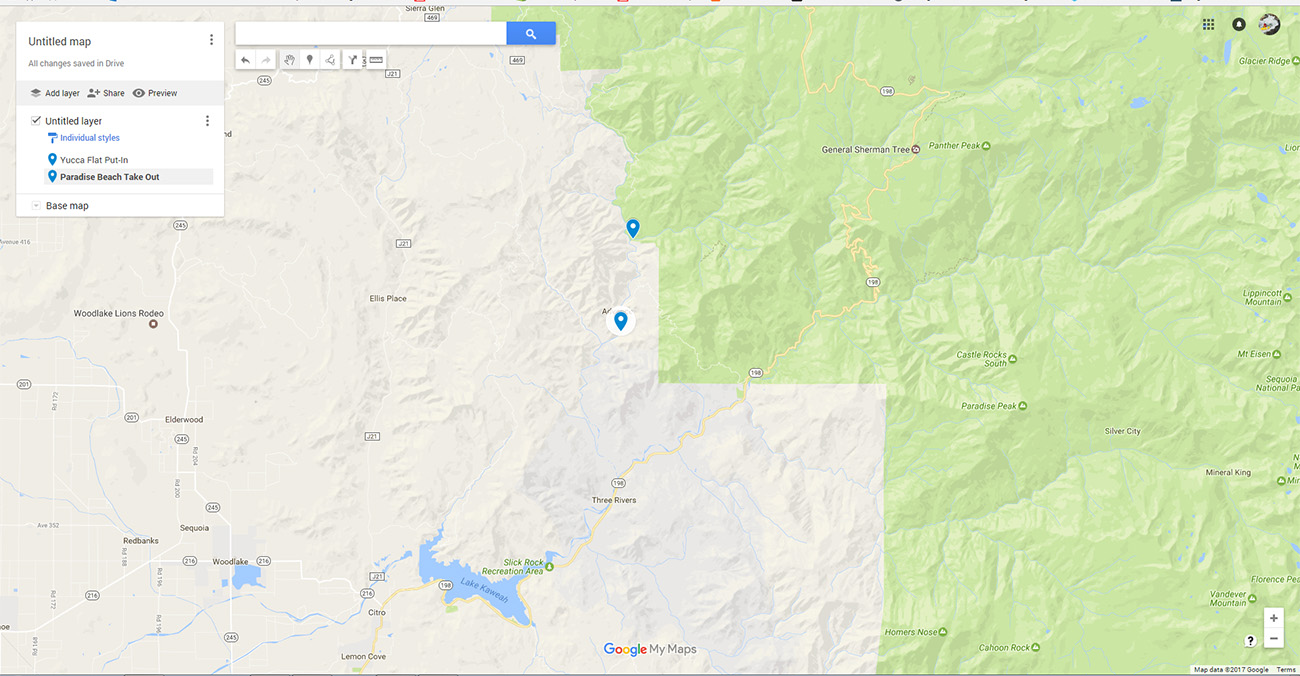