There were a myriad of reasons to choose another destination. Pakistan is almost exactly half way around the world from California, and coupled with a high priced ticket was my loathing for sitting in planes. This journey would require three flights adding up twenty-two hours in the air, followed by two days of driving. The previous year in Newfoundland I swore that my yearly international pilgrimage would never again be to a cold destination.

If you believe the news in America, it is suicidal to travel to Pakistan. The seemingly endless struggle with India over Kashmir continues, and international “War on Terror” continues Afghanistan, with the US launching unsanctioned drone attacks into Pakistan.


The Marriott bombing happened weeks before our flight, so this is what everyone thought about Pakistan. 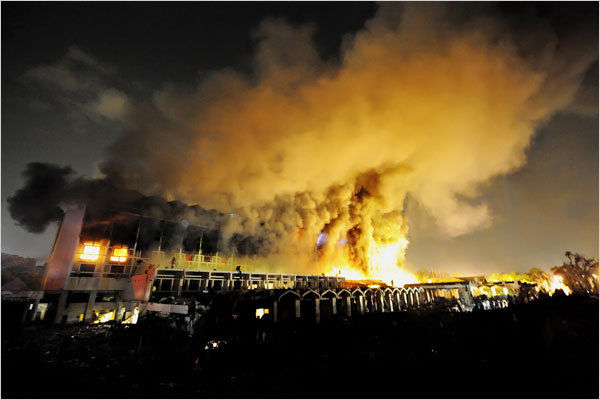 I was on the fence about the trip, leaning away from it, until I received this compelling letter from Roland Stevenson, who had lived in Islamabad for three years while his father worked in the embassy.

“Without getting too philosophical, this is a critical time in Pakistan's history. They're on the brink of Talebanization, dealing with a bad economy, etc. It sounds like a war-zone when you watch CNN or read about it in the papers, but I hope the trip will be able to show a large number of people that most people in Pakistan are peaceful, friendly, and caught between extreme political forces from both Afghanistan and the US. At the end of the day, the trip's about taking the opportunity to relate to people as normal human beings and share stories of Americans and Pakistanis having fun together with the world. We could go in and take a bunch of pictures at the arms market in Dera-Adem-Khel, dress up in shalwar kameez and turbans, and talk about how extreme we are because we're on the front line in Pakistan.... but I don't buy that angle at all. If we succeed at anything, I hope it is to run a safe expedition and draw some attention to the beauty and power of the Karakoram and Himalayan drainages. In my opinion, the story isn't about war, guns, and insurgency, its’ huge mountains, epic rivers, and good relationships”


I couldn’t resist and bought my ticket, as did Ben Stookesberry, Chris Korbulic, Rafa Ortiz and Phil Boyer. Roland was already working a rafting trip in India and would meet us in Islamabad. We would fly into Islamabad, drive twelve hours to Chilas, and then another nine to Skardu. Despite being sandwiched between Afghanistan and India, the people of the Northern Areas known for being peace loving and friendly.

Unusual to our international expeditions, this one wasn’t about a first descent. We were looking at the Indus River from Skardu to the confluence near Gilgit. It was a hundred and seventy kilometer section that had been run before, with the first descent done in 1989.

The 1989 expedition was led by David Allardice, be sure to check the photo gallery on this page, it’s impressive.


Phil and I had the fastest flights possible, with no layovers. It took us about thirty hours door to door, arriving in Islamabad early in the morning. We were glad to be met by Roland, who quickly took us to Mr. Zakaria’s house where we organized our gear into two vans, got breakfast and hit the road.


The mountains and culture were enough to make the drive engaging. 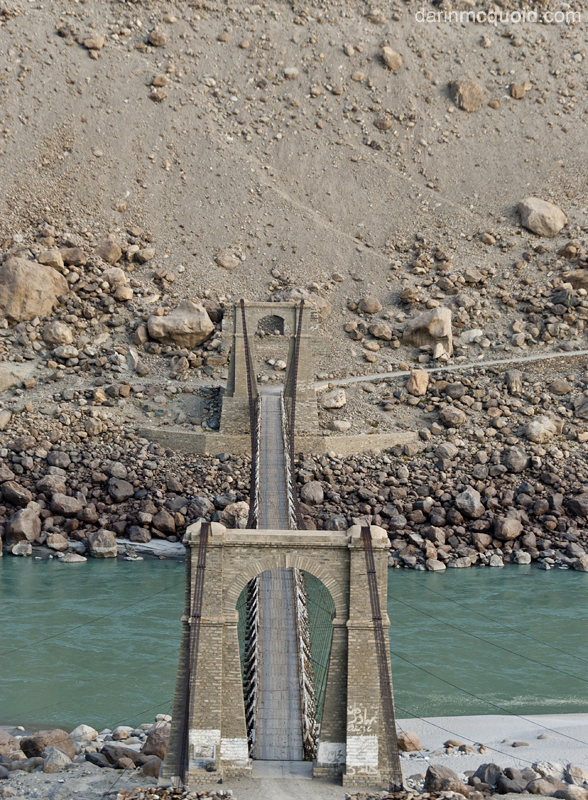 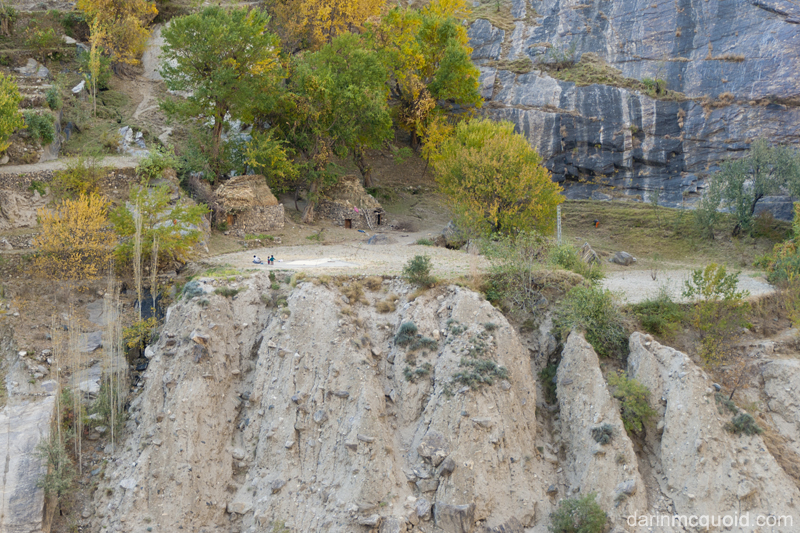 We drove through the day and into the night, finally stopping in Chilas, got up early again the next morning and hit the road. While still on the Karakoram Highway we stopped to enjoy Nanga Parbat. 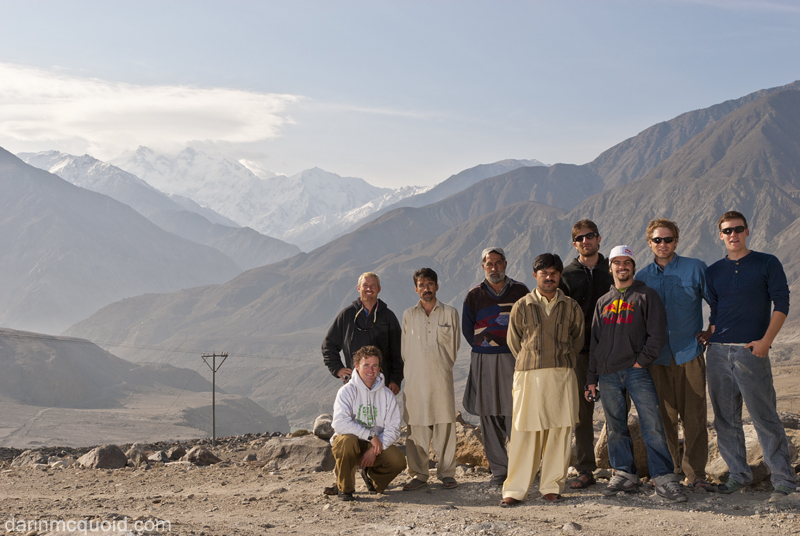 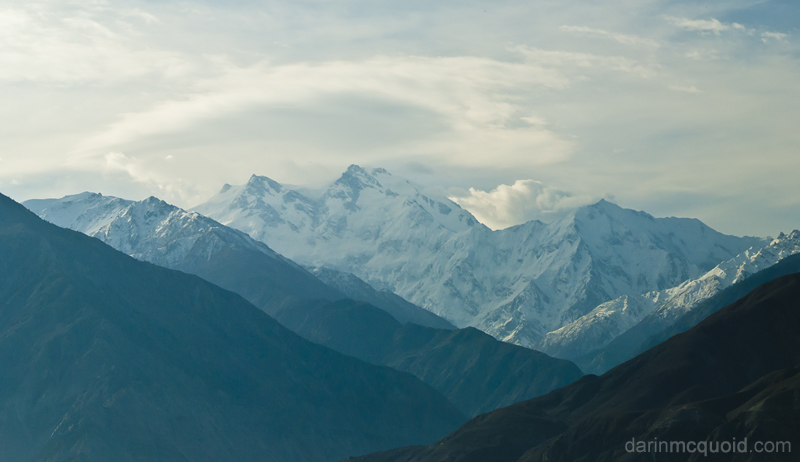 It seemed like we were in the middle of nowhere, then our driver Rashid pulled out his cell and called home. 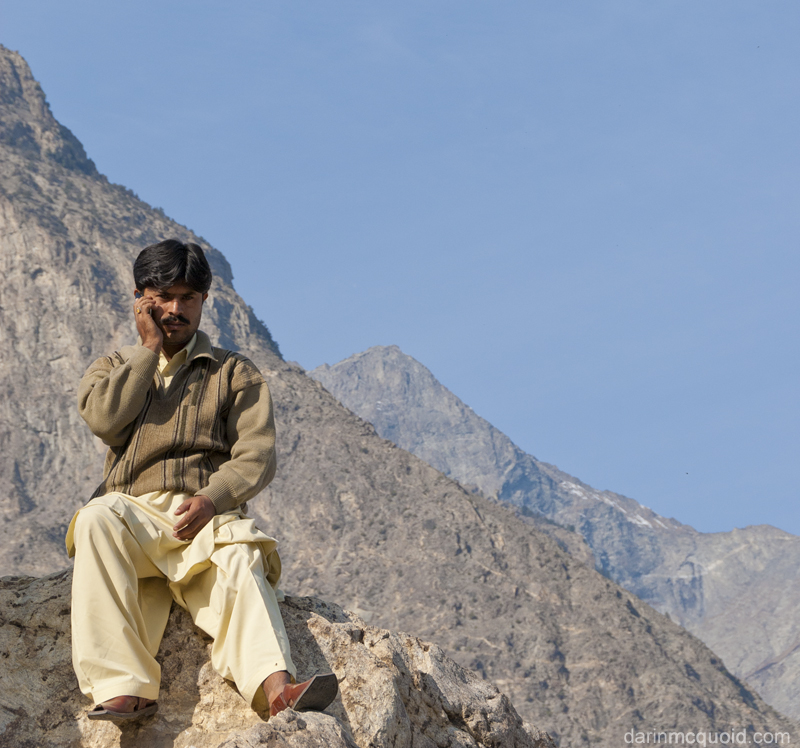 While back in the states Ben and I had ourselves convinced that in November the river would be low…between 5,000 and 10,000cfs. Here we are at the confluence of the Gilgit and Indus, and it looked like somewhere around 15,000cfs. 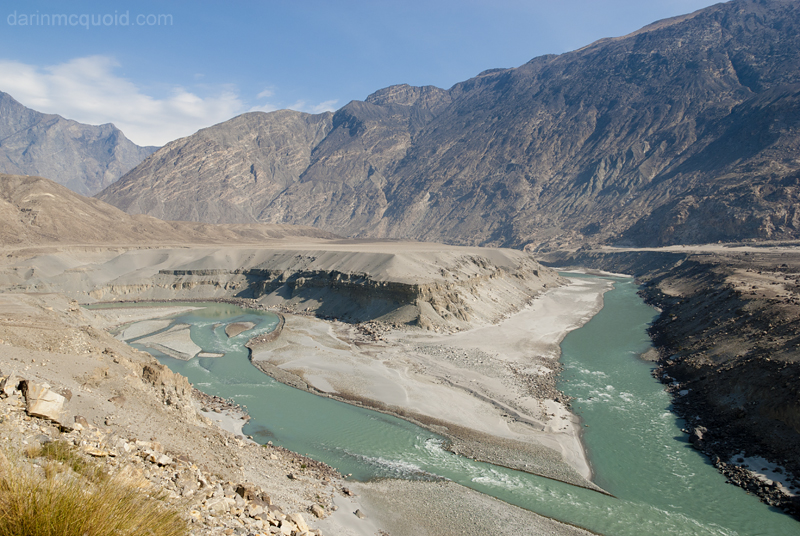 One factor that helped me motivation was the thought of being in the Karakoram and Himalaya, so I had too get lots of pictures of the mighty mountains. This place will make you feel small. 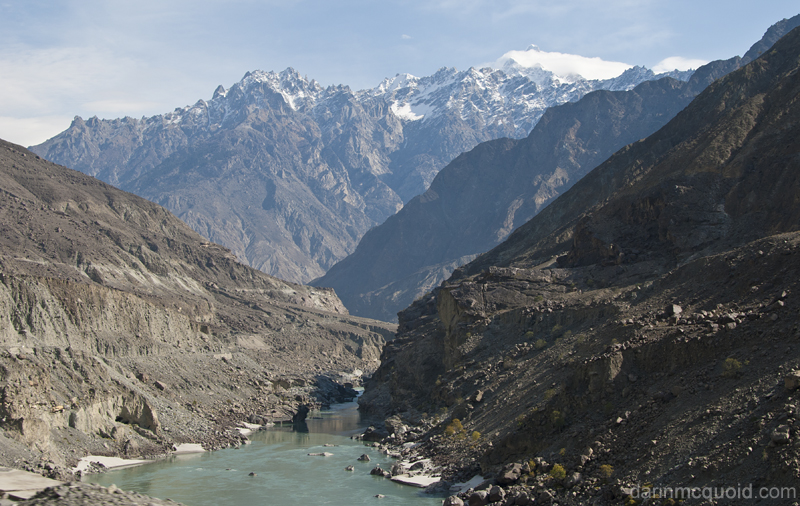 Phil Boyer stands near the river with the same mountain range towering overhead. 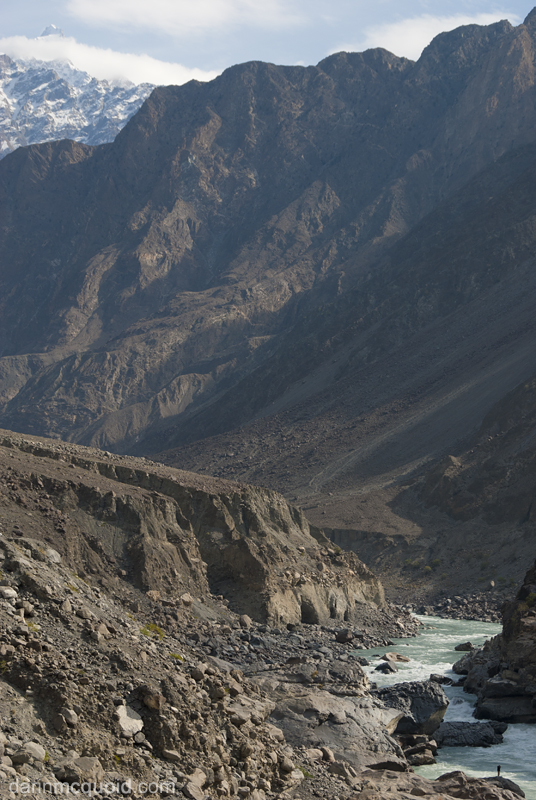 “That looks big, even from a few hundred feet up” 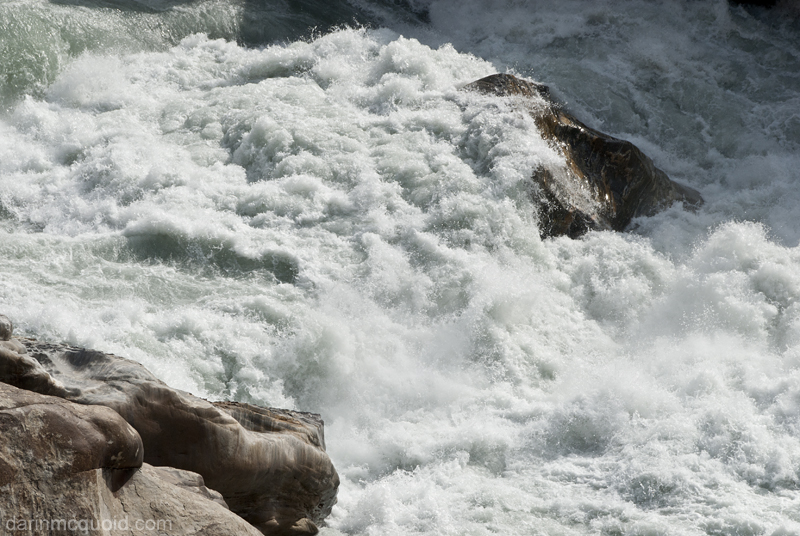 The larger rapids mandated several stops to check things out. This is the cover shot portaged viewed from below. 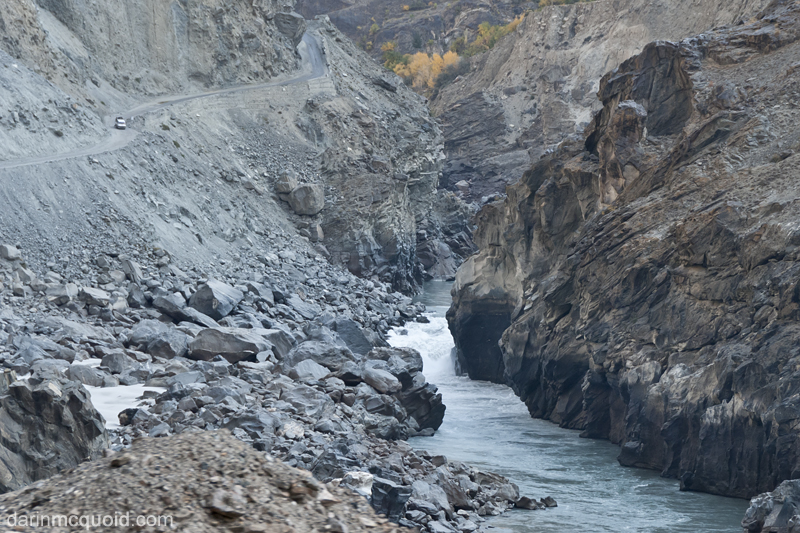 The road reminded me of the Cal-Salmon road, just a lot longer and a several hundred feet higher above the river. With lots of traffic too. The driving was honestly the most dangerous part of the whole trip. 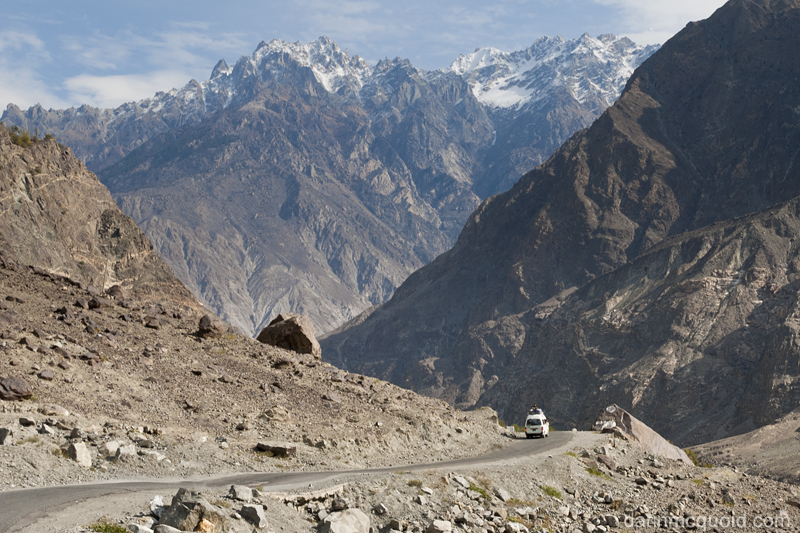 The restaurants aren’t boring either. We stopped in for lunch halfway to Skardu and while getting lunch, tried to ignore a goat being slaughtered next door. 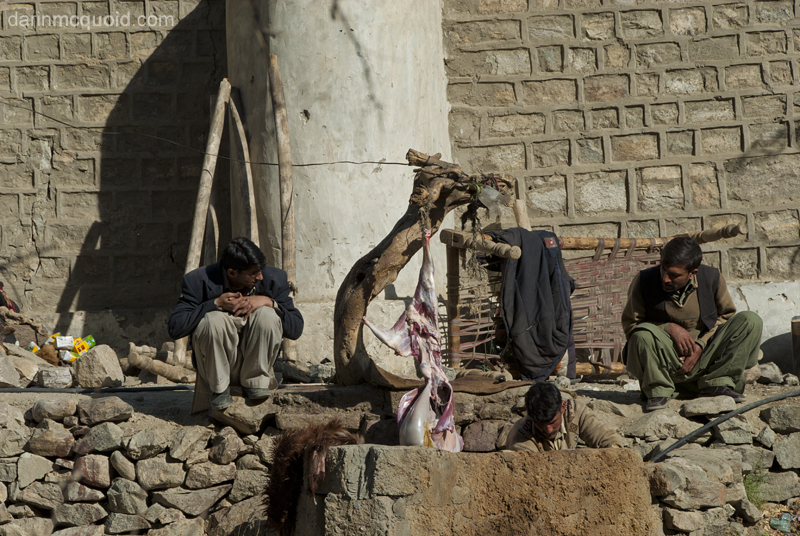 The days end early at these elevations in November, but every evening was beautiful. 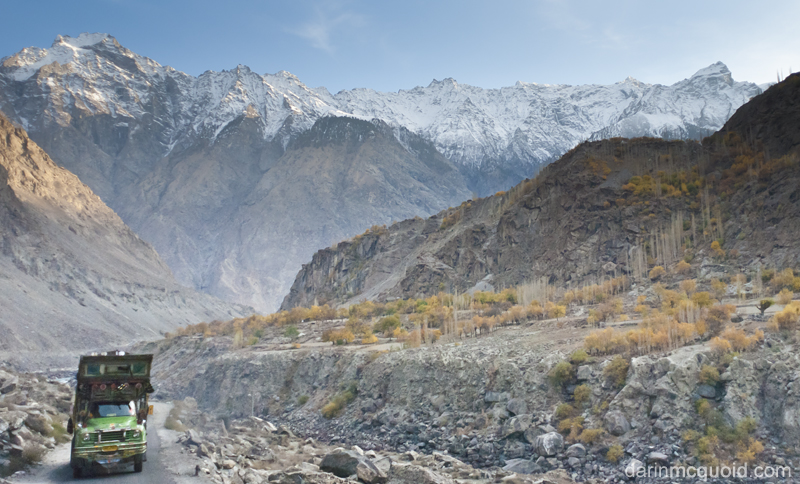 We made it! After four days of constant travel we were in Skardu. We quickly secured a hotel and went to the bazaar to shop for expedition supplies.


Rafa Ortiz checks out the options offered by the bazaar. 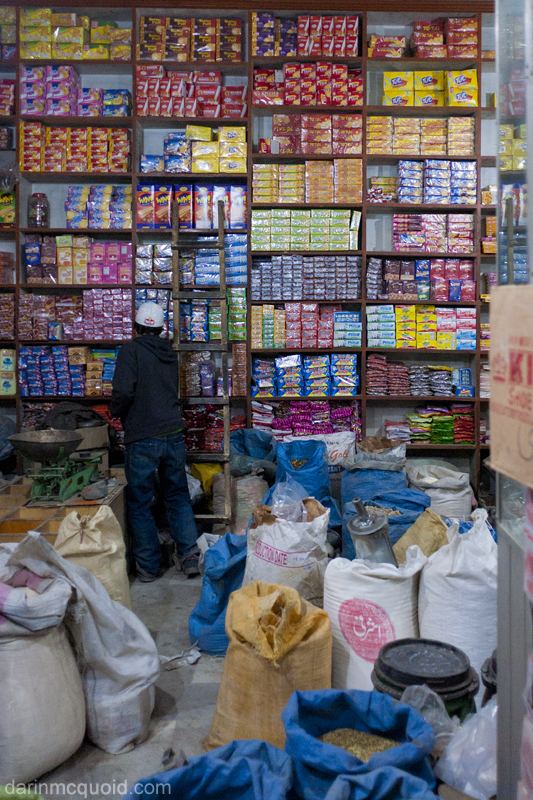 Once we secured enough food and some fuel we went back to the hotel and crashed out, still not sure of our exact plan for the following day, put on the Indus or secure a jeep to drive us to Askole, and run the Braldu down into the Indus?