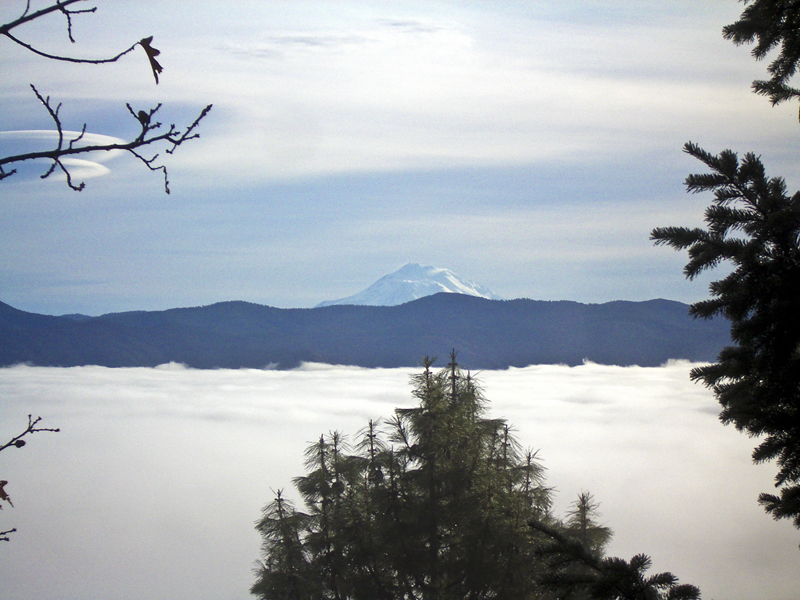 It's not the High Sierra, but it's about as close as you can get in far Northern California. This report is brief excerpts from several trips into Patterson Creek, a Scott River tributary in Scott Valley, California. Our first foray into Patterson Creek started off well, and we put in high up where the rough dirt road crosses the creek itself. 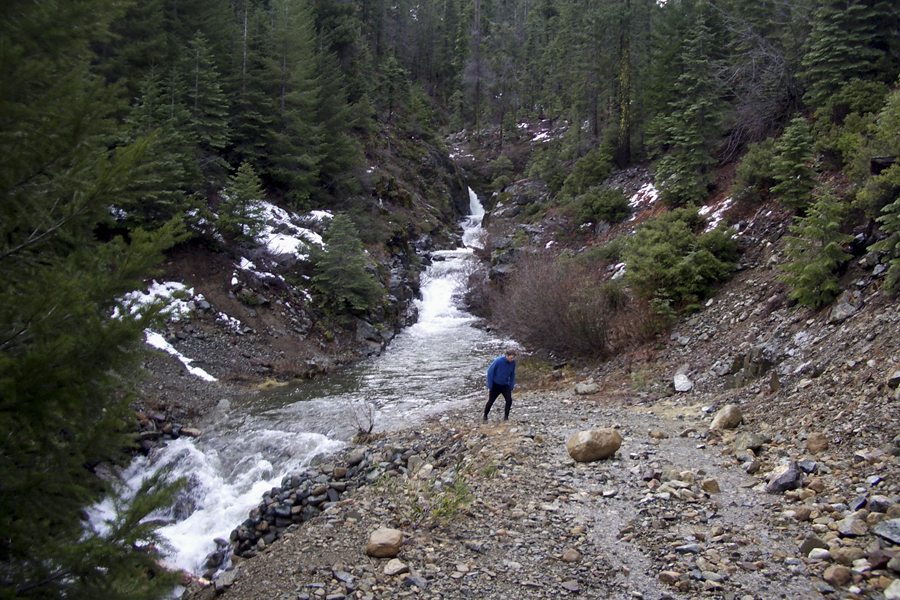 A little brush dodging and one high quality drop under our belts led to us hiking out. This section was steeper and mankier than Ben remembered, and we hiked out to the road. At least we got one good one in. 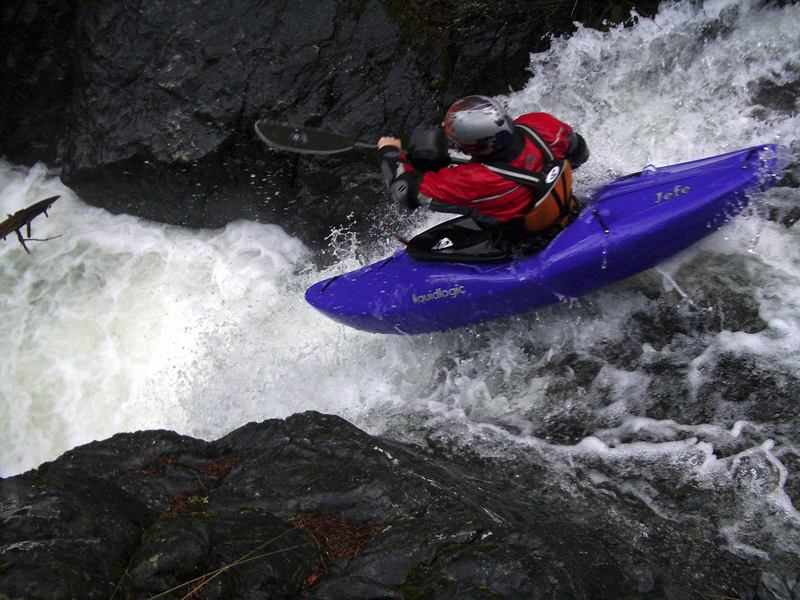 We were back minus one after a much needed break on Christmas day. Water had dropped a bit and Ben and I were off to get back on Patterson Creek, in slightly colder weather. We decided to put-in at a previously used halfway point. Ben said we would miss one really good rapid, but avoid a lot of hiking, something I liked the sound of. It was 11:00 by the time we reached the abandoned road to the put-in, and we quickly geared up and headed off down the road in a flurry of wet snow. It’s a shame that the hike to most runs isn’t downhill, it certainly makes it go by fast. The weather and the put-in road, snow elevation dropped quite a bit during the weekend. 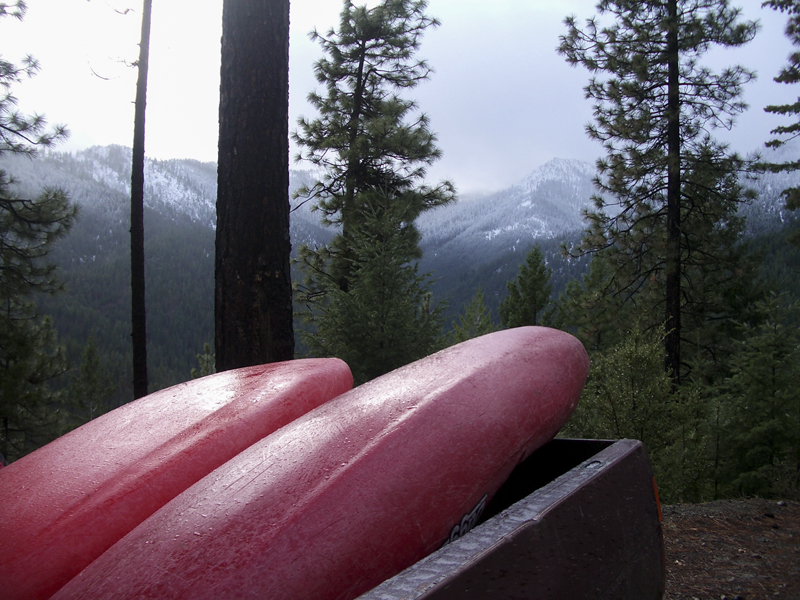 Ben led the way down the road until there was a log across it, and from there we dropped off the side and did a combination of hiking and sliding to the water. Right where we were started off with a nice set of small slides and waterfalls, but ending up in a logjam that was lacking an eddy, quite a shame. These cleaned up the next year and gave us access to several thrilling drops at the put in.


Devin Knight gets into the goods. 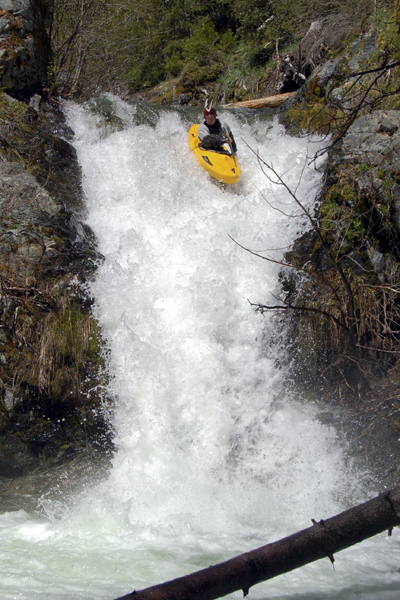 Putting in below this set of rapids we bumped our way down into a quick log portage, then an extended scout. The rapid itself looked sweet, this picture only shows the bottom ¼ of the rapid. It started off with a bunch of clean slides leading into this little fall that was infested with a tragic piece of wood, ruining the whole rapid once again. 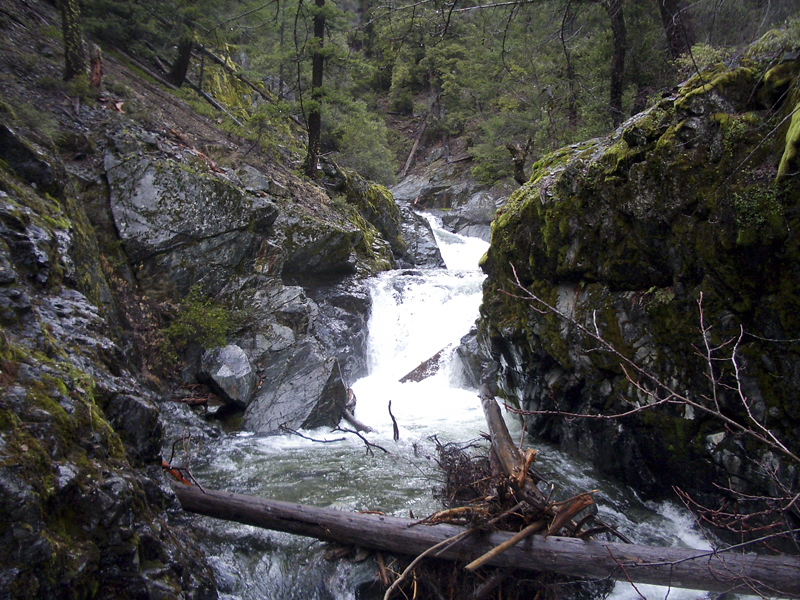 Since then the logs moved and the slides were quite pleasurable. 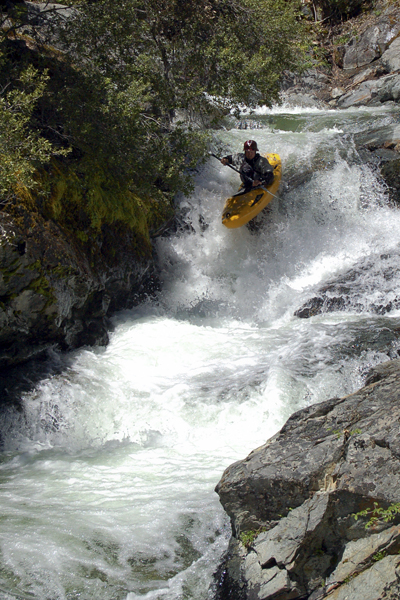 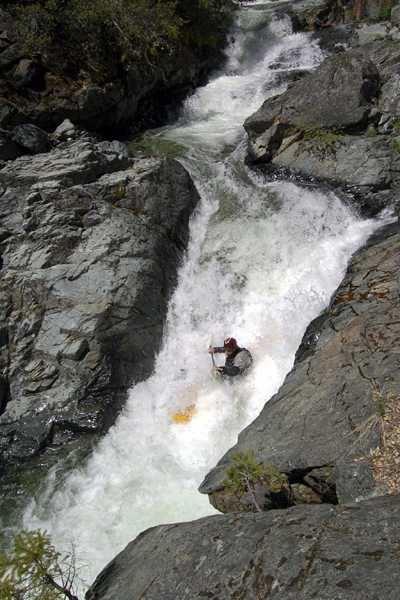 Final drop of the slide. 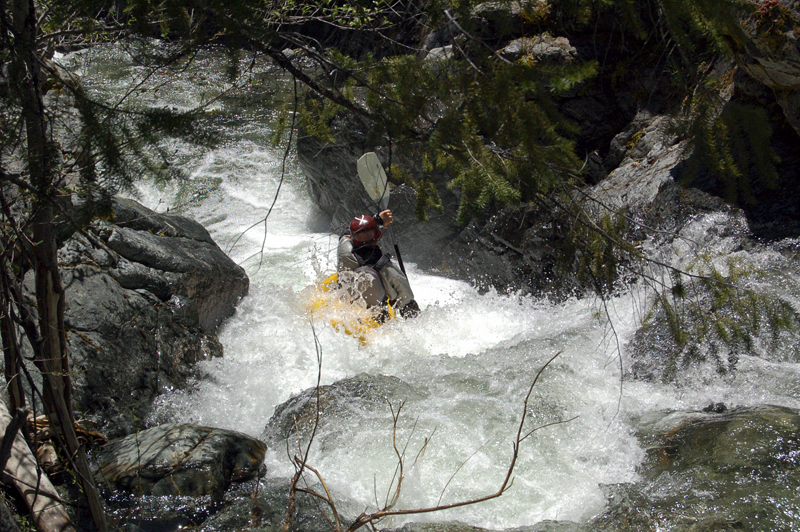 The pace after this was rather slow, low volume junky rapids with lots of log portages. Eventually we came upon a fun ledge drop that Ben runs in this video.

We were off to run some more junk, interspersed with fun drops like this. 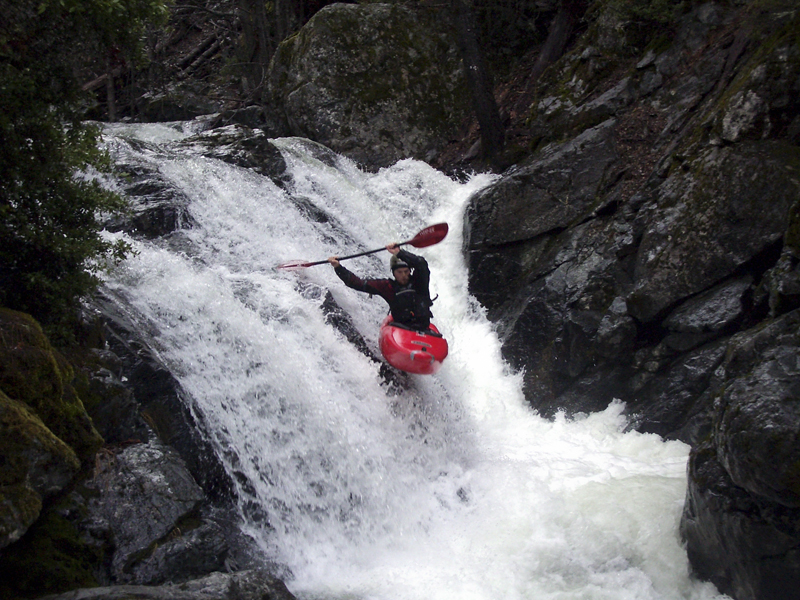 Eventually while portaging some wood ended up on the right back and on another abandoned road. This road would probably be a better put-in than the one we used, unless all the wood was cleared out. We put-back on the water right above this twisty little waterfall.

The next waterfall looks more than a little dubious. 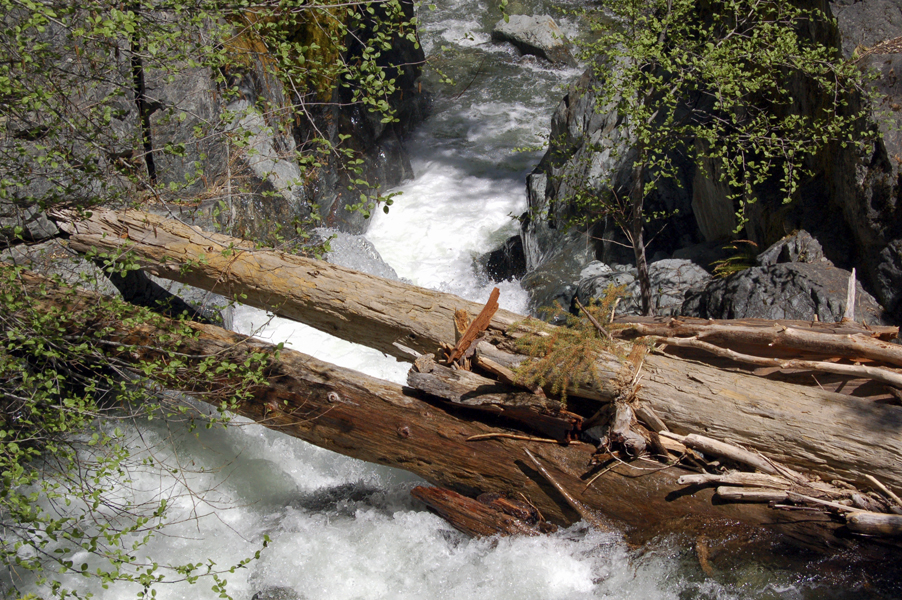 Right below the falls we eddied out and portaged around a nice waterfall that had some logs all the way across the lip that would make it super sketchy. A bit more mank carried on for a while, when all the sudden we came upon a large horizon line and hopped out on the right. This is a pretty sweet spot, you can climb perhaps 20-30 yards and you are on a ridge between two drainages that have a confluence immediately below. You can see rapids on one side, then walk 20’ and see rapids on the other creek as well. Ben led the way down this 30-35’ off vertical waterfall, the confluence drop. 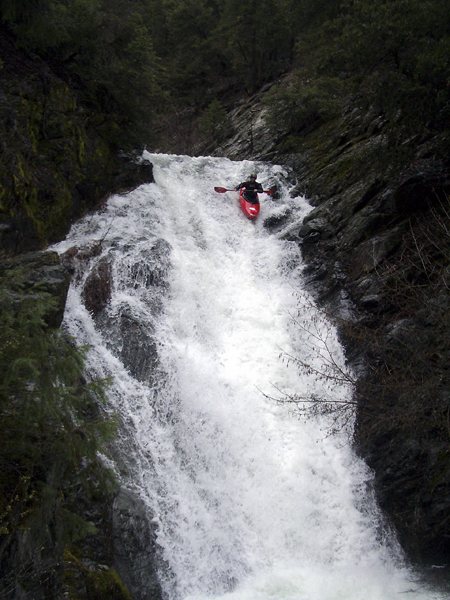 Ben works the photography angle for me and makes it look huge as I run it from right to middle. 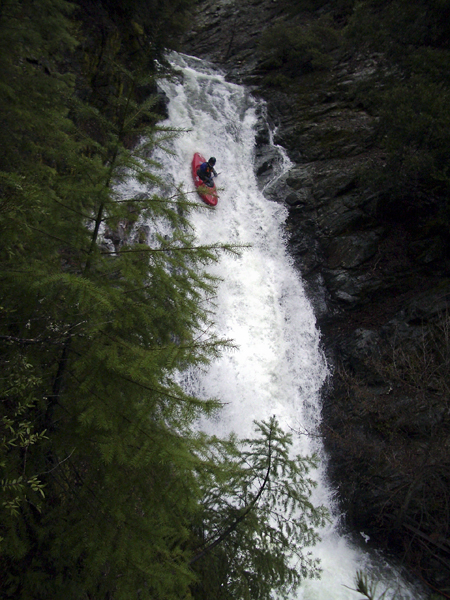 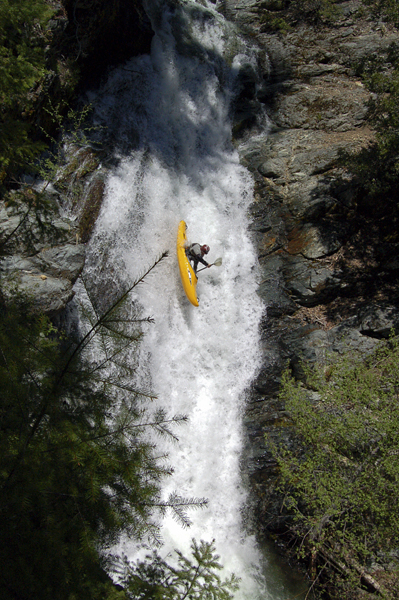 After the confluence drop the run suddenly got quite classic, and we did quick scouts and signals to run down several fun waterfalls.


The log in this one is gone, opening up the left boof. 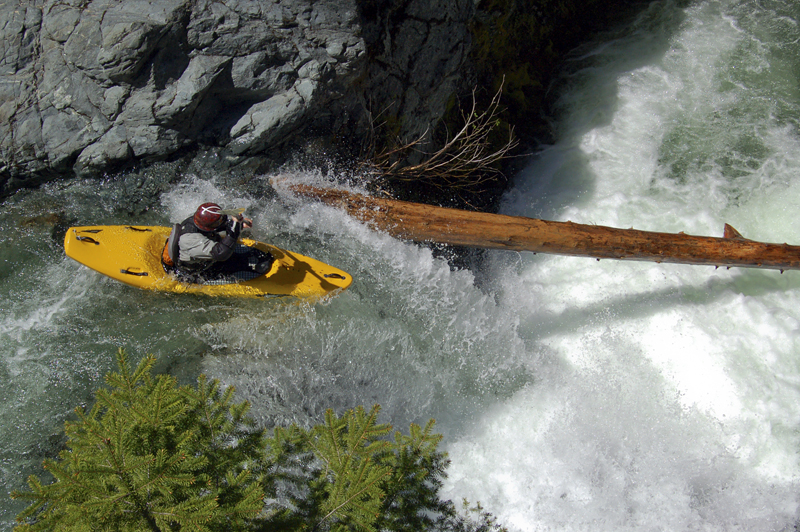 Ben about to go deeper than expected. 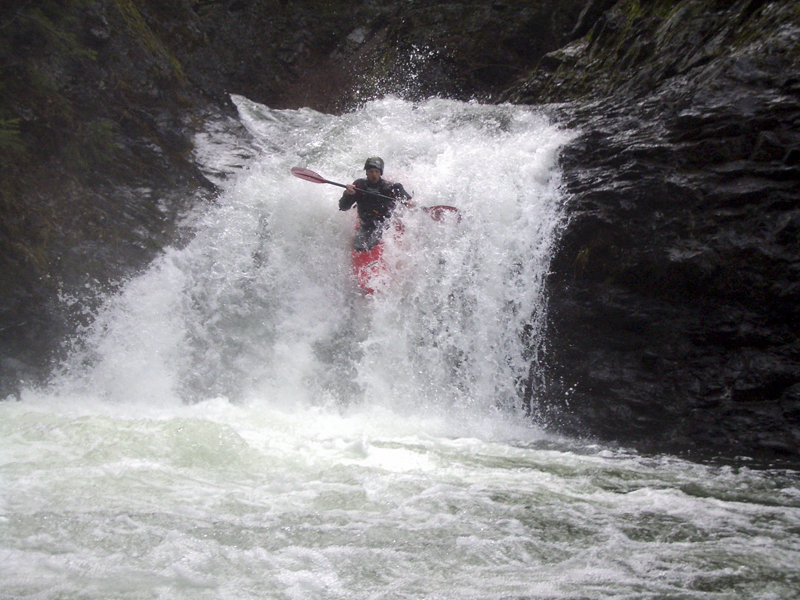 Following this drop was a huge, quite long section of boogie water that could have used a bit more water. We bumped our way down it getting quite cold in the process. Eventually it turned back into bedrock and we eddied out to scout this rapid, here is the first 1/3 of the rapid. 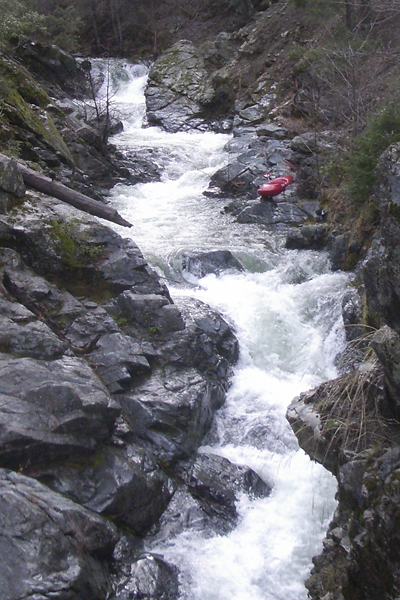 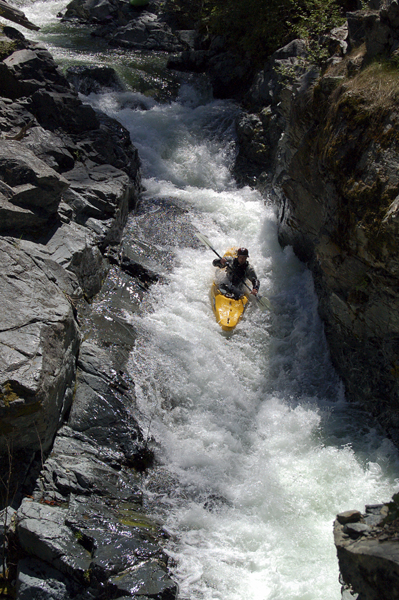 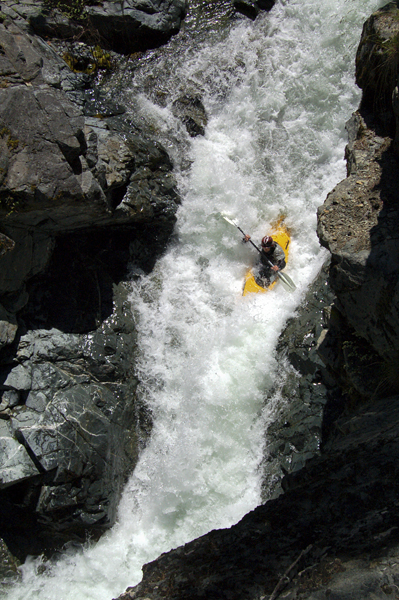 From the eddy this rapid looks absolutely horrible, but after a scramble up the hillside it looked like a go, although it had a terrible pocket that it would be wise to avoid. Here is Ben in the bottom 1/3 of the rapid, it was actually one of the best on the run, and the last real rapid before take-out. The last time I did this run, in 2008, something changed in the bottom rapid and it looks terrible from all angles.


[Spring 06: this run is now a relative classic and portages have dropped to 5-6] In fall '05 and our 7-12 portages it took us from 11 at the put-in to a 4:00 take-out. At that time I didn't consider it a classic, but a lot of wood cleaned up since then. The mini gorge after the confluence rapid is undoubtedly classic, and I am sure I will do this run again. We did it with the Scott at 3,000, and found the flow was medium, but good for the current wood situation.

If you get the weather right, the views during shuttle are fantastic too. 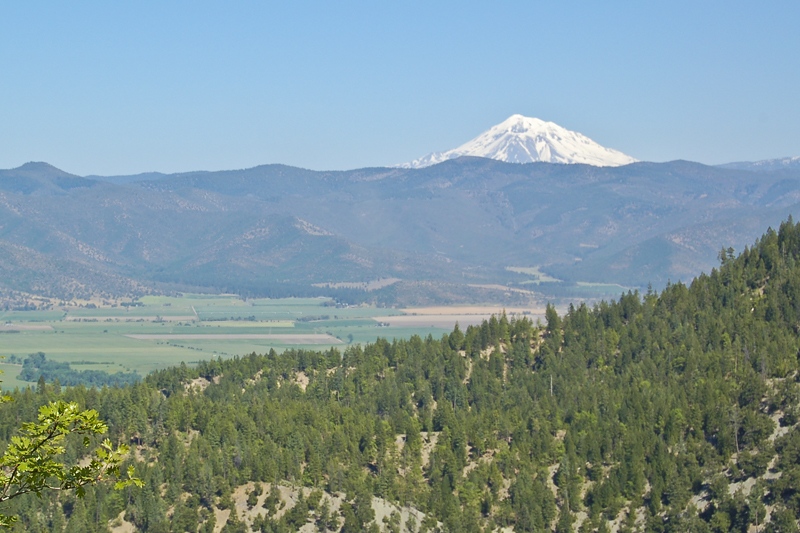