Our third day in country and second on the water, Jesse Coombs. 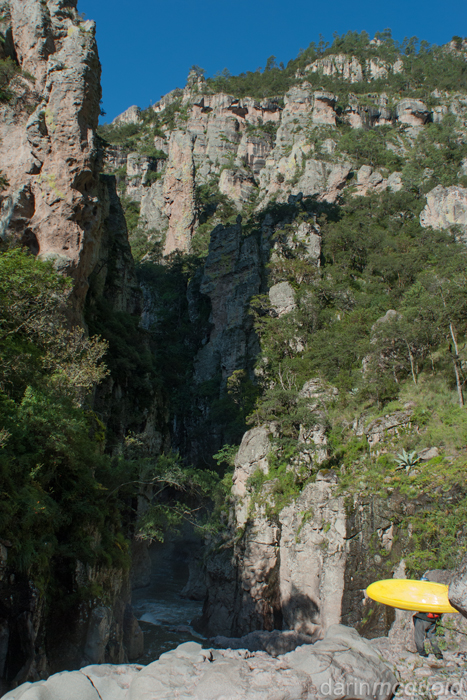 Deep in the canyon. Last night saw our arrival at the base of the spire. The spire signified the extent of our gorge rim scouting mission. The downstream vertical canyon marks the beginning of the unknown. 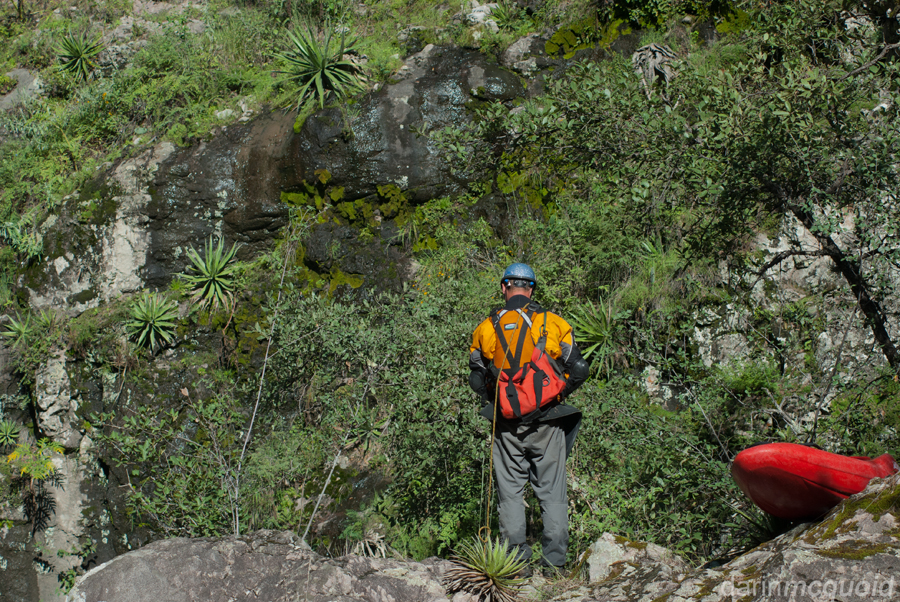 It was already nice and warm in the morning. Finishing the portage required a little boat lowering, which is quite a bit of work when your kayak has overnight gear and seven days of food. Less food: a weight easement contrasts with a heightening sense of urgency. The entry drop to the gorge was a nice bedrock ledge. Water was lower than the previous day, but that was fine with us because this drop would have a big hole at higher flows.


Looking back upstream at the portage. 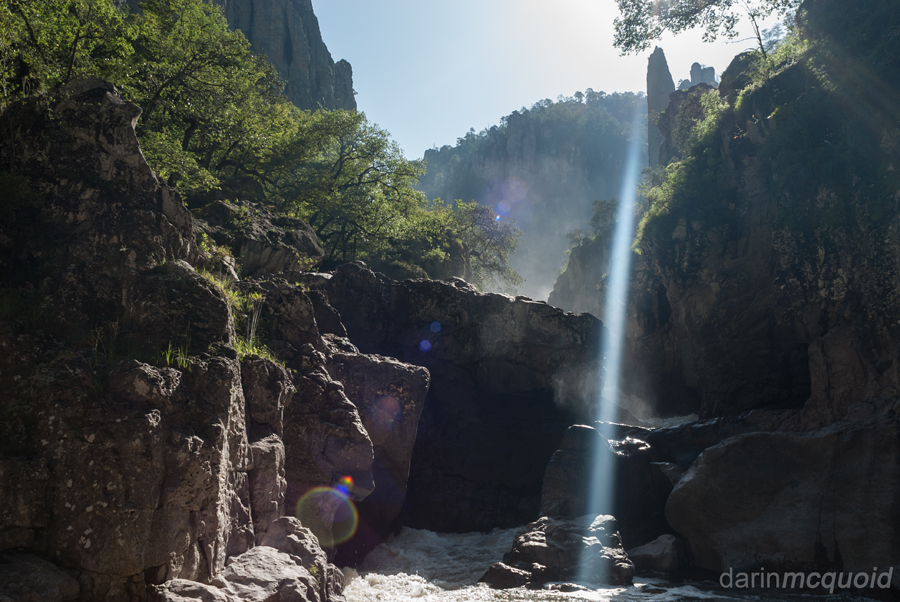 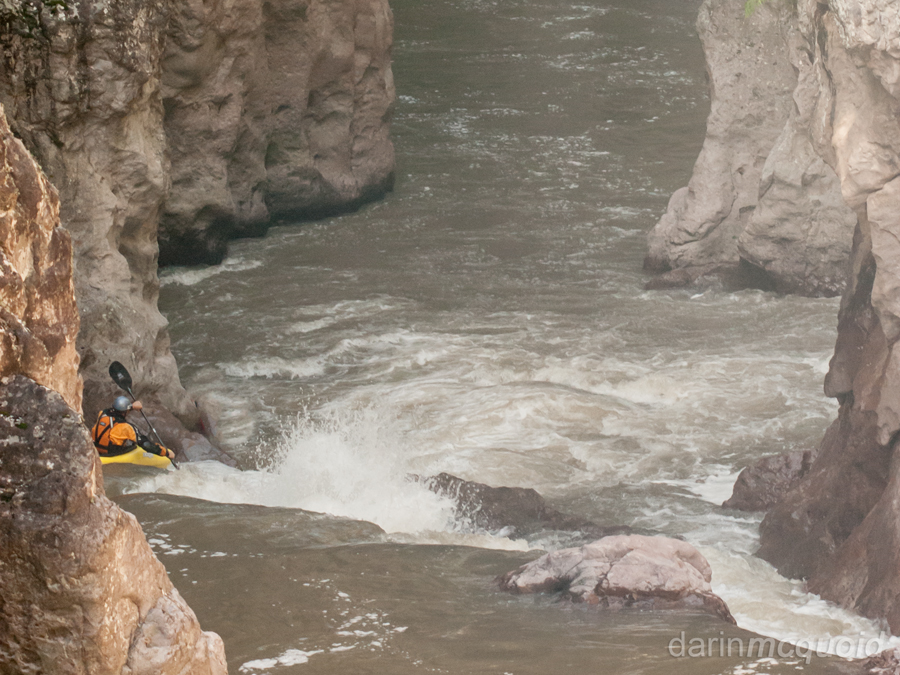 Bad lighting in a beautiful place. The nature of exploration. 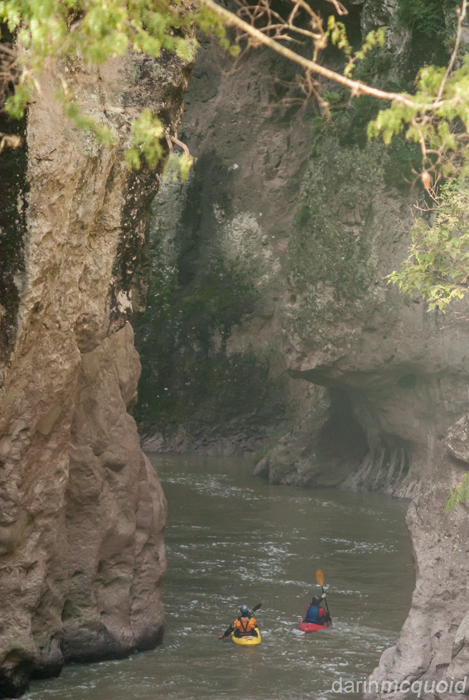 The gorge only contained flat water and pleasant scenery. On the other side gradient continued to accelerate, but the canyon was open enough for us to portage over rocks and occasionally under them. This portage forced us to finish in a seal launch above a ten foot falls. 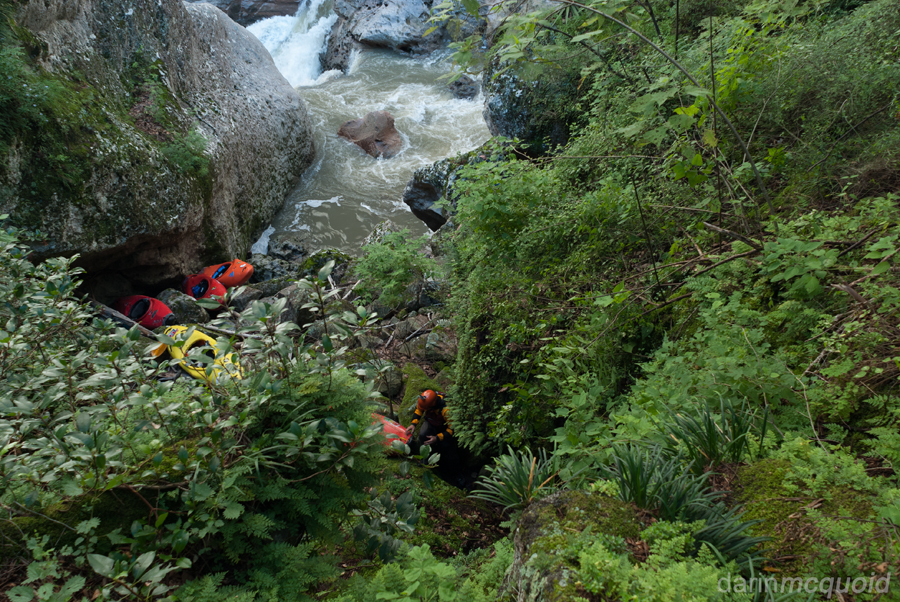 "A picture is worth a thousand words" Portages mixed with navigable boulder gardens. Stunning sights the entire way. Dwarfed by a canyon wall of the Rio Piaxtla. 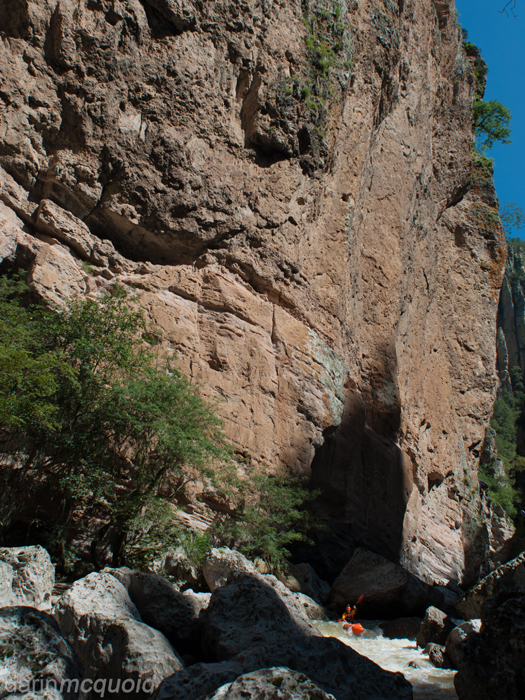 Let's hope we can figure things out at river level, because there is no getting out of this epic, and formidable canyon. Jesse enjoying the experience. 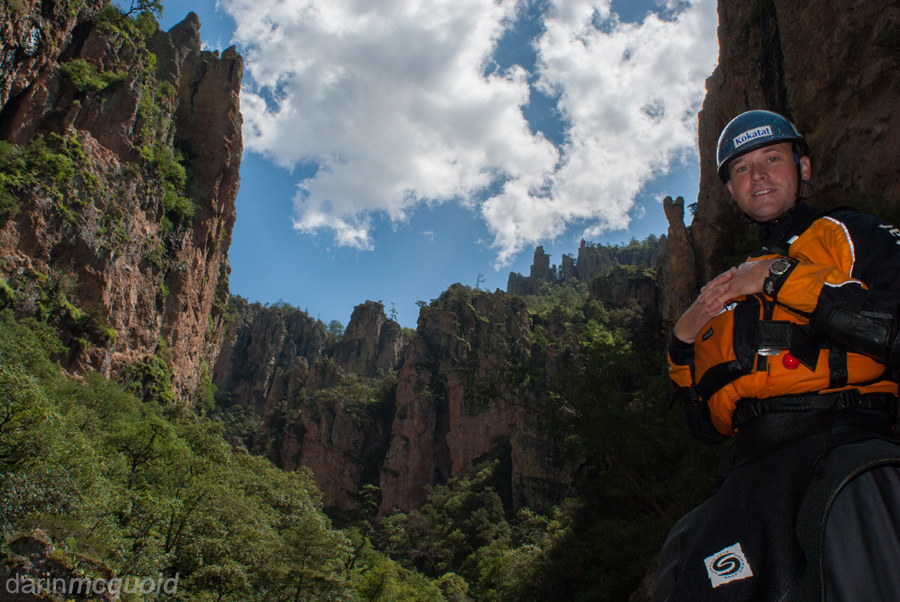 Rocky Contos in his element. 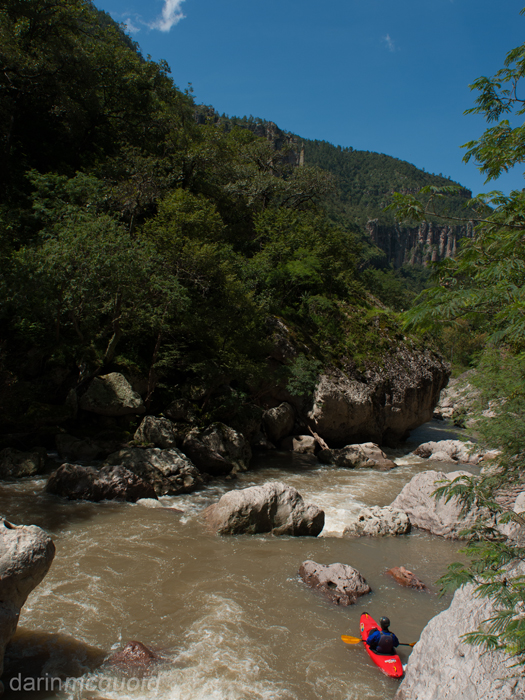 Lush jungle in one spot, cactus in other. The canyon of the Piaxtla is a place of amazing contrast. Ben above our first large falls, which unfortunately lands on rock and required our second rappel. 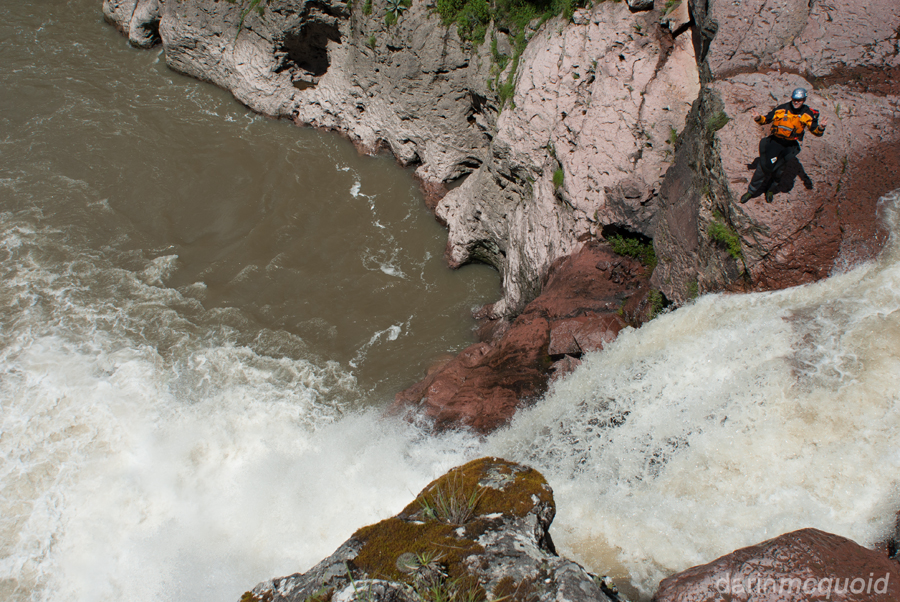 Jesse loving the adventure. Note the ancient native ruins in the wall far above river level. 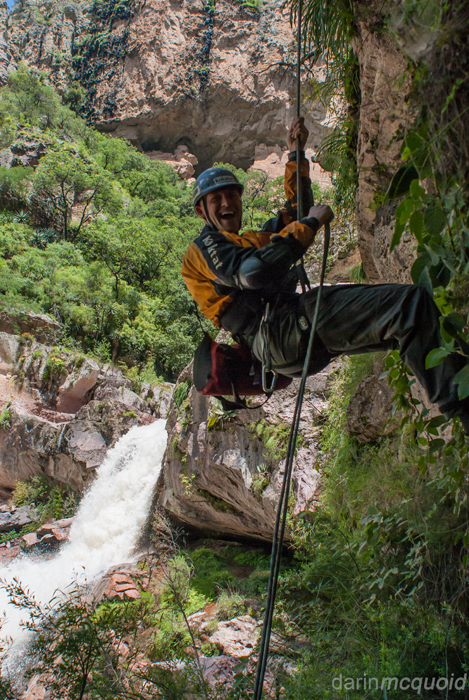 The nature of the Sierra Occidental is boulder gardens. The low angle slides we'd seen so far were out of character, as was the big falls we'd portaged. Going in we expected boulder gardens but knew of the large falls. The unspoken hope was that not only would there be the big falls, but perhaps others in this abnormal slice of the mountain range. Coming out of yet another boulder garden to a large horizon line, I expected something to be wrong with the falls, but of course hoped for the best.

It only took a few seconds of scouting for us to have ear to ear grins. This thirty to forty foot falls was good to. The lead in was complex enough to make it interesting, but not too dangerous. The landing looked pretty good, there was a significant but easy to avoid cave far on the left.


Jesse Coombs lines it up, it wanted to take you left, but you don't want to go too far right either. 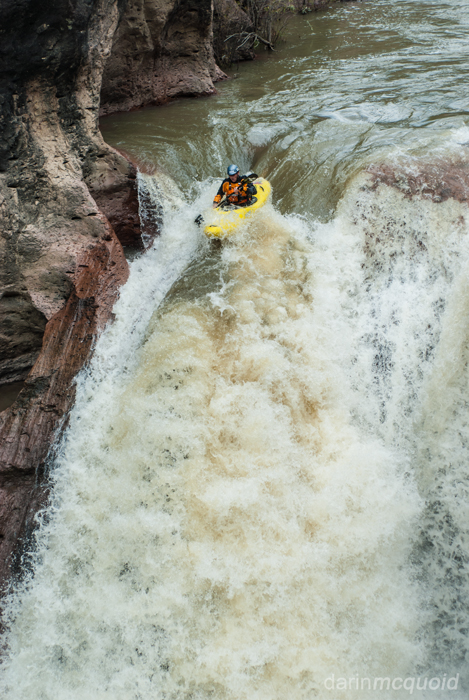 Because it feels so good. 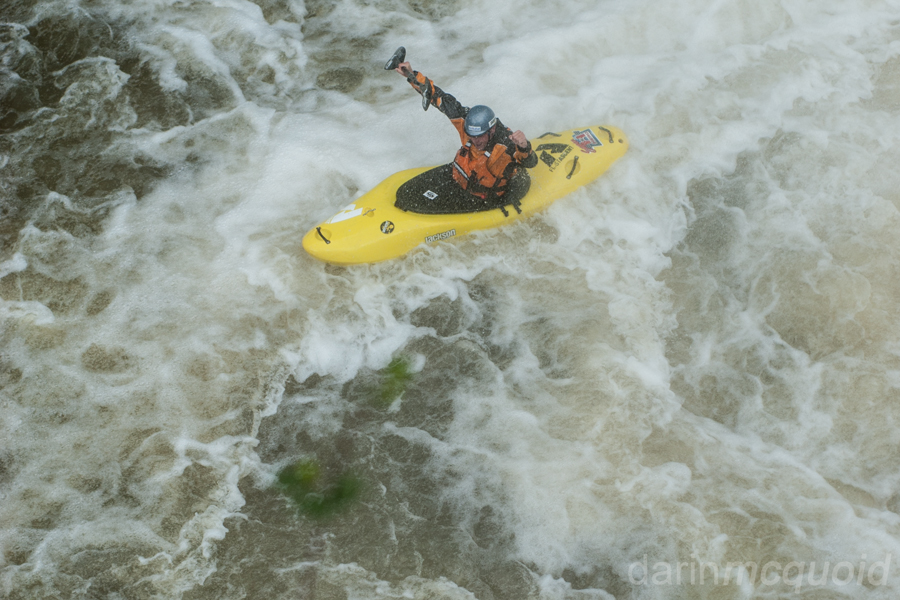 Rocky Contos enjoys a pleasant surprise on the Piaxtla. 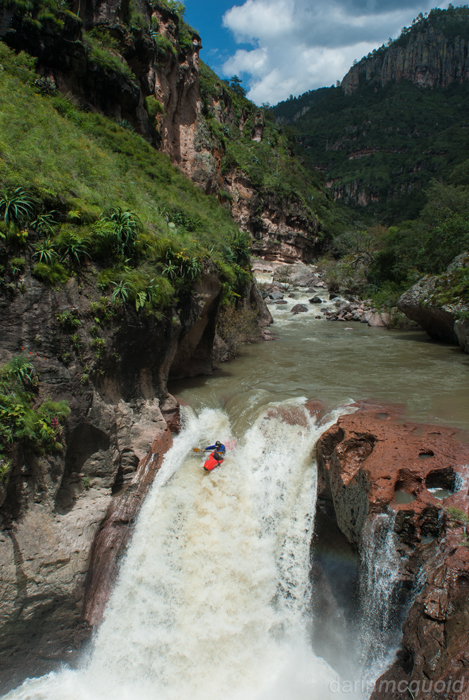 I was getting set up for Ben to go and had a shot in mind. As he peeled out I had it all framed and perfect when a gigantic spider ran across my hand. I nearly dropped the camera but thankfully the spider ran off and I was able to frame the shot at the last second. We carried extra animation to the lip of the next drop, because from above we'd seen that it was pool drop. Would there be more great falls?

The next cataract was more of a slide than falls. If it was roadside, or anywhere close to it, I'm pretty sure it would have been run. On the other hand, days away from help in a remote, hard to access gorge, the possibility of taking an injurious hit was too much to risk, and we made quick work of the portage. Another pool and horizon line. Once again a very questionable falls. Perhaps with higher water, or smooth granite, the lead in would have been possible. As it was it appeared that a paddler would get slowed down by the abrasive rock and then fall to a massive piton or hit on the left wall.


After extensive scouting Ben decided to use his seal launching skills to run the falls past the shallow lead-in. 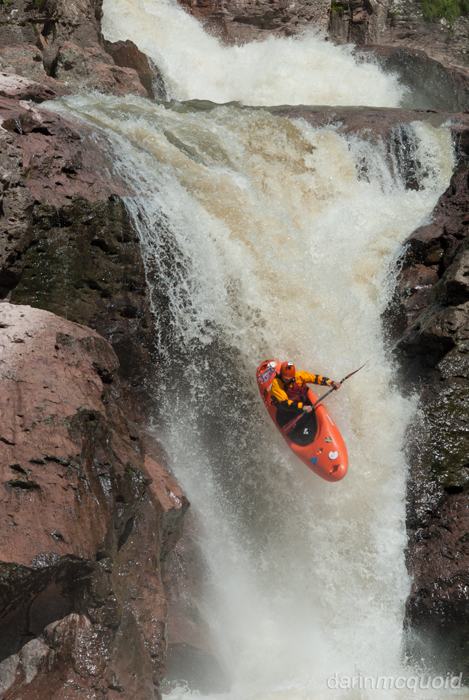 Past the falls a boulder garden led into a mini-gorge section, where one large rock split the river into two tight channels. A quick scout on the wall showed us a seal launch down the center or options on the side. James led the charge on the left, took a piton and brief surf in the pothole before paddling out.


Ben follows with a nice piton too. 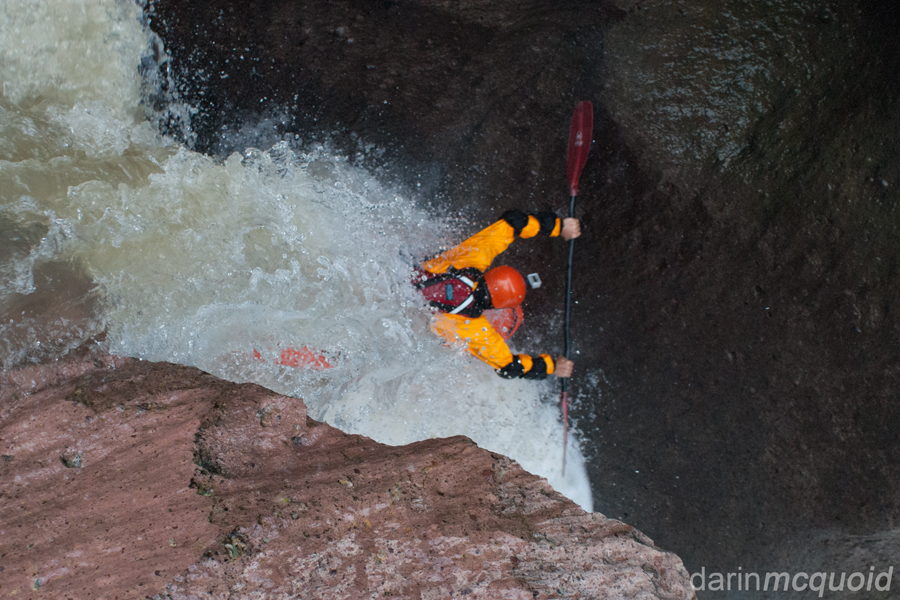 Not liking the mandatory piton, I thought the right channel looked good, provided I drove hard enough to the left to avoid a piton and cave on the right. I came in hot, got my bow up where I wanted it, but still pitoned at the bottom and got my own quick surf in a cave. The joys of murky water! Paddling through calm water we were all pleased with the day. We'd made acceptable downstream progress and ran better drops than expected. As the right wall peeled back from the river, sun had already left the canyon and we jumped on the opportunity to partake of a nice campsite well above river level in case the ever present threat of rain came through. The temperatures are mild, but we're all coming down with a rash and getting harassed by the obnoxious black flies. Looking at the topo and our guesstimated pace of travel, we should reach the six hundred foot falls tomorrow.


Jesse and James stoke the fire. 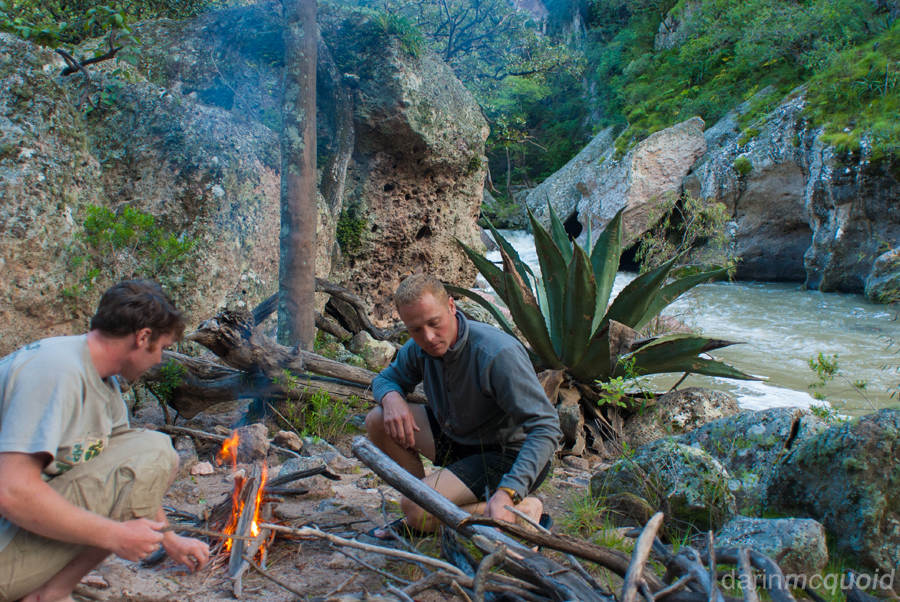