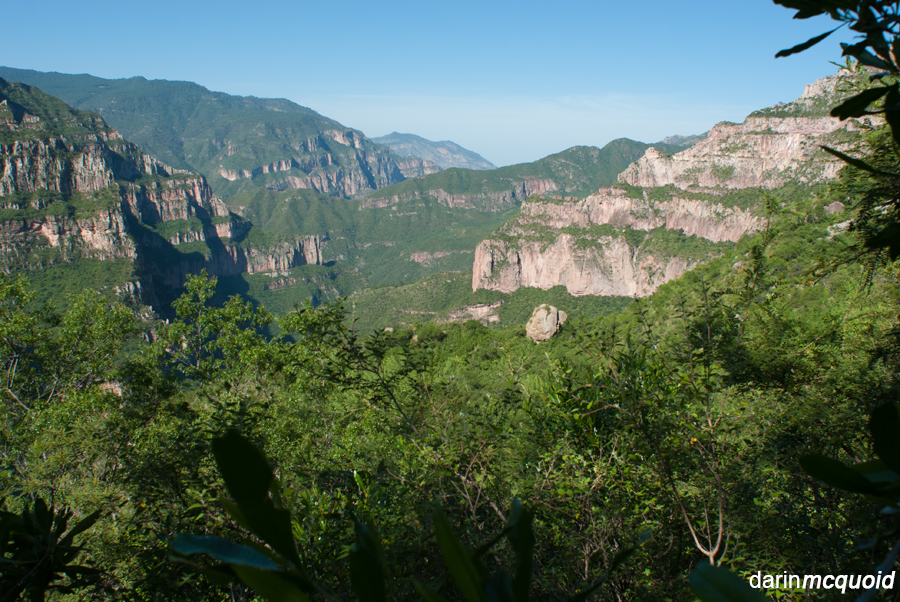 We rose at seven, hoping to make the climb before it was became drenched in sweat inspiring sunlight. Out of camp we were fortunate to be on game trails, and although they branched off in many directions Ben and Rocky were able to maintain a steady course due to their previous scouting mission. Initially the climbing wasn't bad, we were in the shade and it was just thick forest, but as we ascended the vegetation transitioned to high desert. The Agave plant, well known as the source of tequila; normally feared for it's morning after damage. The locals called it the centurion plant, and I'm not sure if it was wild agave or a close relative. Either way the menace was up front, these five foot high plants had thorns as big as six inches and required much caution to traverse around as they lined the trail. The climb up was much like the infamous South Branch hike out, but replace all California vegetation with thorny plants.


Forty-five minutes of steep climbing and were in the sun and on a bench above the canyon, done with "stage one" and huddling under thorn trees for shade. 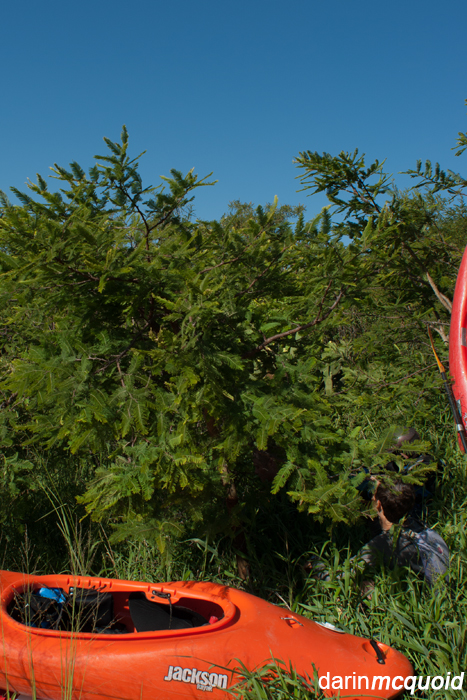 Jesse Coombs making the most of our break. 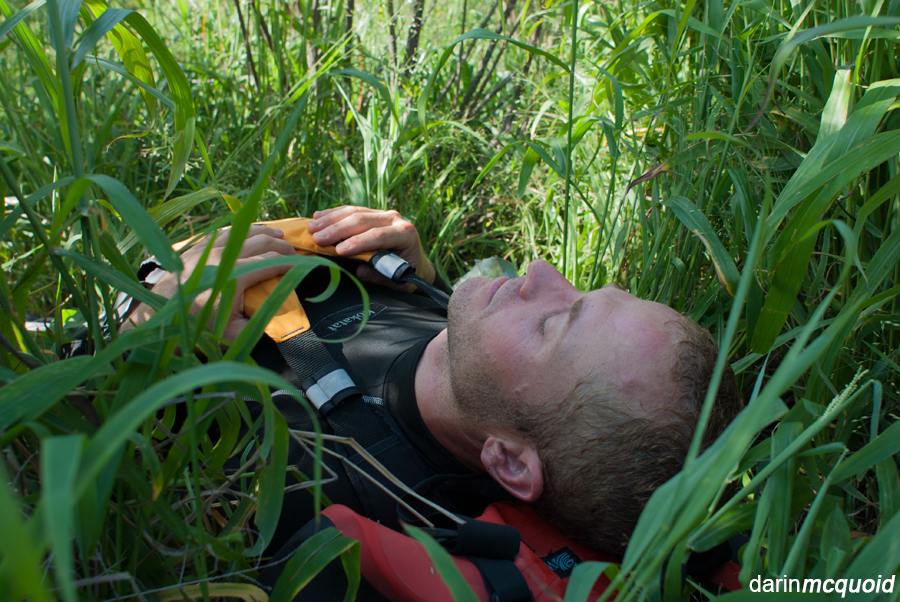 Stage two: the traverse. The traverse would not be too long in distance, but we were now off trail of any sort and would be bushwhacking through thorn bushes across steep scree fields.


Deep in the joys of stage two. 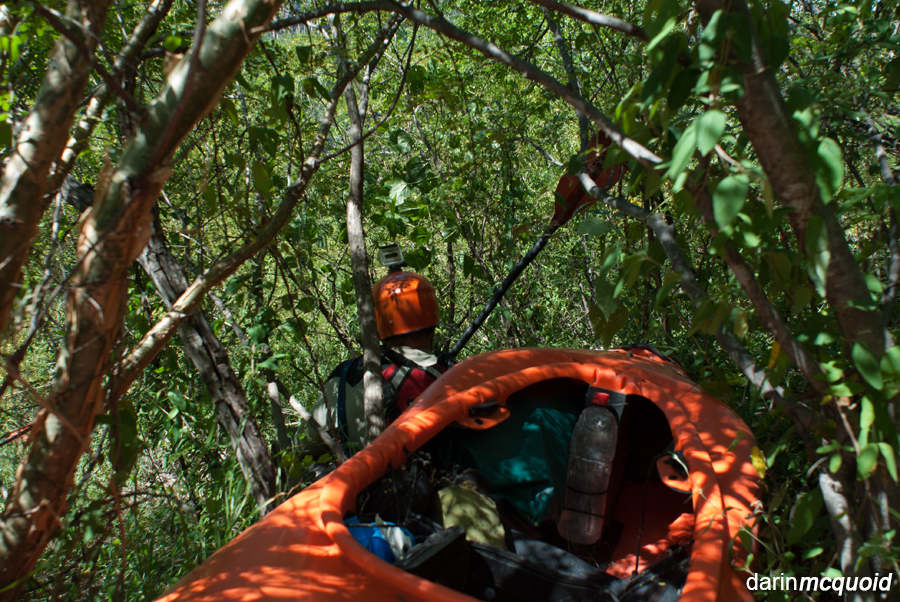 It would appear that things open up here, but really it's just steep enough to offer a glimpse of what we are about to drop into. The large rock on the right marks the end of stage two, and the beginning of stage three.

It took us just over an hour and a half to make the traverse. Getting our heavy boats through the brush while not sliding down a scree field was tough, but we were just a little behind schedule for the optimistic three hour portage. Four hours wouldn't be too bad. In the shade of the large rock we took a long break, finishing off our water reserves and getting a snack before stage three. 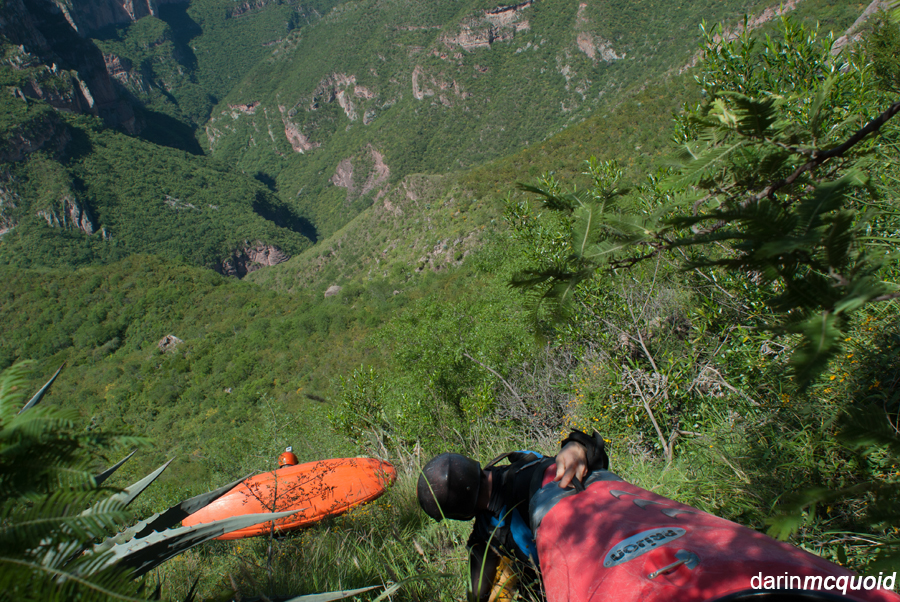 The descent plan was simple. Drop while traversing to the right, into the gully pictured above. Our map showed a steep but continuous gradient in the gully. We should be able to keep dragging our boats through the underbrush in the gully and be at the river in an hour or two.

Cresting the ridge next to the gully we got a stellar view of the canyon. If the ridge looked good we'd take it to the river, but the ridge was full of cliffs; into the ravine we go. 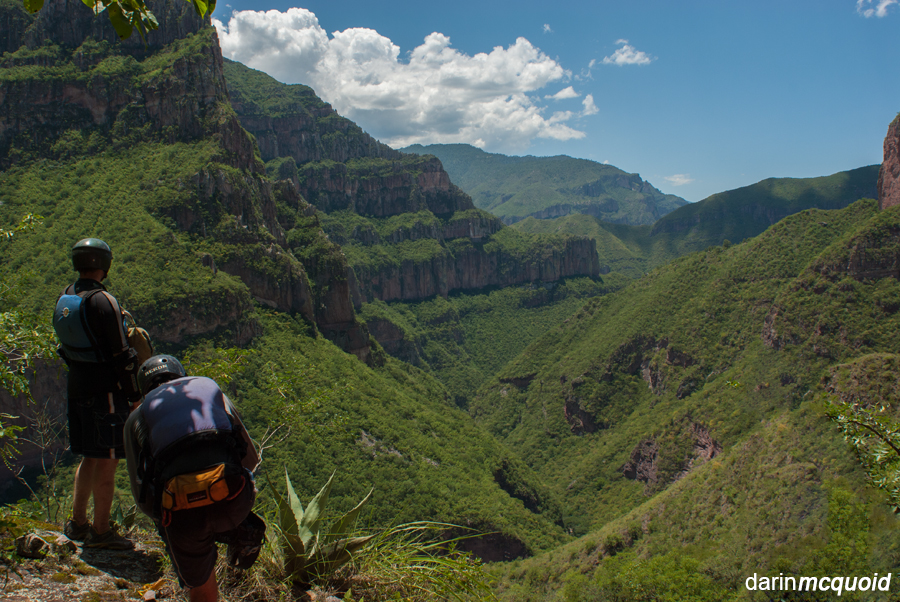 Getting into the ravine was a bit tougher than expected. The slope was too steep to manage with our hundred pound kayaks, so for the first time on this portage we got out the rope and lowered the boats through two pitches to the bottom of the ravine. At the bottom of the ravine things looked good. Well relatively good. It was like we expected, filled with bush and steep but we could just drag our boats behind us and as we ducked through the branches.

Thirty yards into the ravine we came upon what a dry waterfall, aka a cliff. Peering over the edge it looked like we could get away with a quick rappel and continue dragging. Of course a quick rappel is a relative term with five people and one harness, as it eats up a massive amount of time when you add in the time spent lowering boats too.

Finished with the rappel we pulled our rope and entered the underbrush again for all of twenty yards before we were on another cliff. A little larger than the last. In fact too large for one climbing rope, so we tied our two together and set it up so we could still pull them after our descent.

Rinse and repeat again, and once again. We were trying to go as fast as possible, the heat was taking its toll. Our one hour planned descent had already eaten up four hours. By the end of our fourth or fifth rappel we were severely dehydrated, to the point of poor physical performance and getting close to impaired judgment.


The good news was that we could finally see the river. The bad news is that it was almost directly under us, and we wouldn't be getting there any time soon. 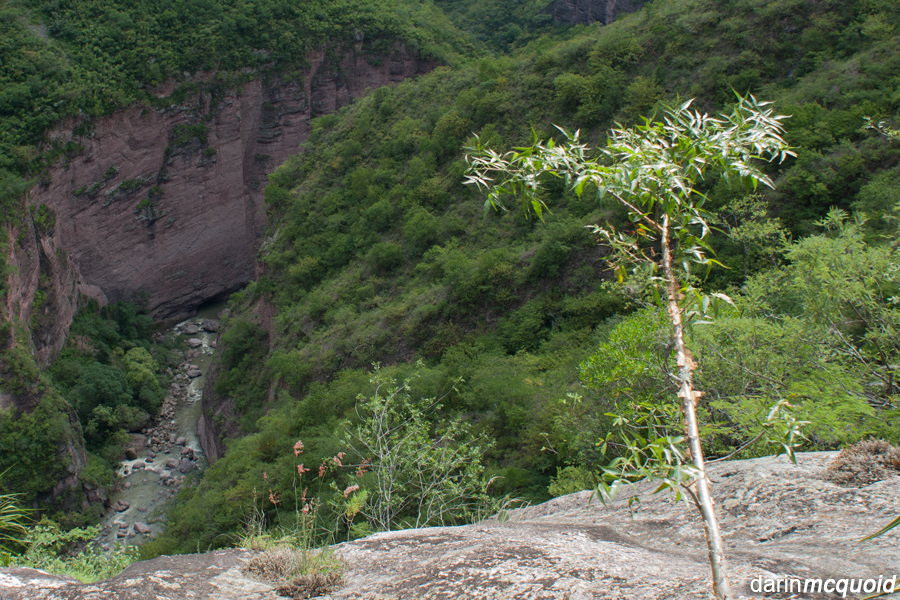 Desperate times call for desperate measures. There was a pool of water full of dead bugs and had been there quite a while. Acknowledging the reality of our situation we filtered out the largest chunks of debris through the mesh part of a elbow pad and added liberal amounts of iodine. Still having a little bit of Tang mix to cover the bug and iodine flavor - priceless.

While we filtered water Rocky and Ben did some scouting for rappel options. There was really only one, another double rope rappel to a ledge where we could traverse right. The problem was that after the right traverse the cliff was massive, and they were unable to ascertain if we'd be able to drop to one more ledge, or if we'd have to single strand our climbing ropes and abandon them, hoping we'd be close enough to the river at that point not to need them. Of course we still had several river miles downstream that dropped four hundred feet, and there was a good chance we'd need those ropes again.


One more ledge down as evening clouds roll up the canyon. James Dusenberry. 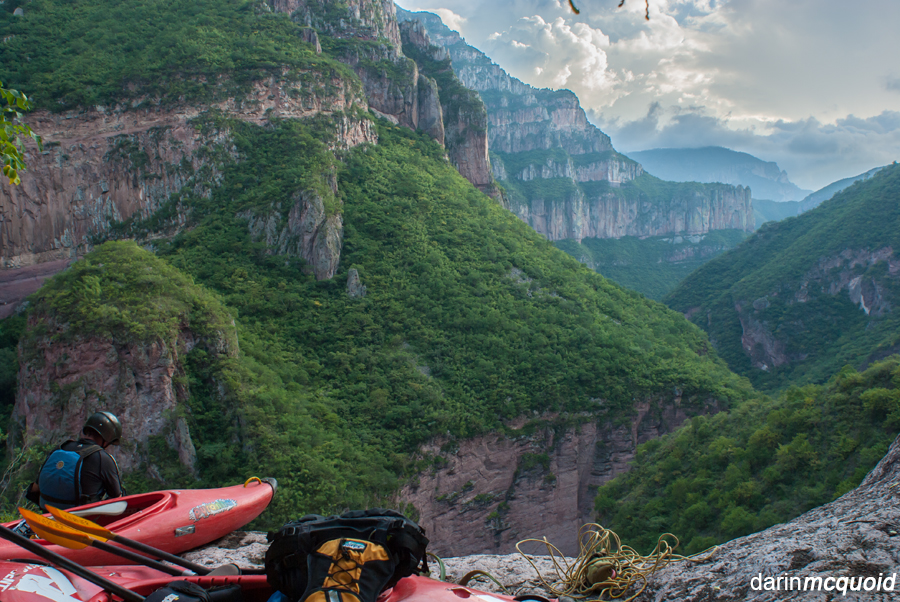 We setup the ropes tied together but as a double strand, and probed over the rolling edge of the cliff. A big whoop followed by verbal communication eased our worries, a small ledge would allow us to extricate ourselves and the climbing ropes. Extra time was spent in this section because we had to pass boats across the traverse, and then lower then to the small shelf where the lower team scavenged enough room for the kayaks to rest. 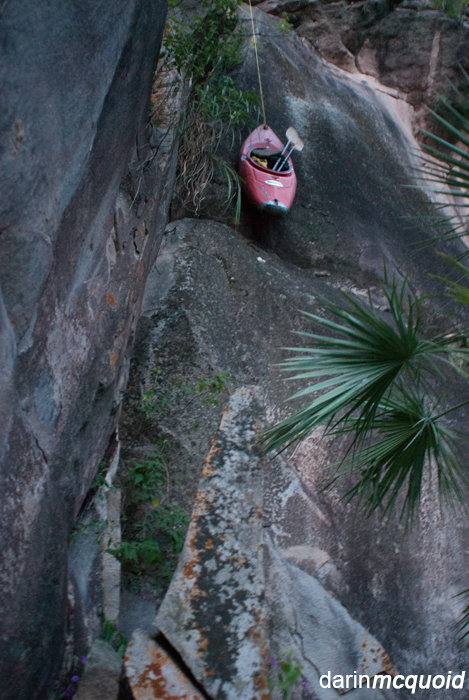 By the time our whole team was on the narrow ledge dusk was setting in. We'd been portaging for nearly twelve hours. Below us was another double rope rappel, and to complicate things the kayaks were hanging up on a tree halfway down the cliff, so we took turns helping the kayaks down during our rappel. Full night set in and a beautiful moon came out as we finished the rappel. We still couldn't hear the river but knew it must be close. Thankfully the gradient appeared to taper off, and we drug our boats through the dry creek bed knowing the river couldn't be too far.

A few hundred yards of progress was made by headlamp before a ten foot ledge. One team member sent a boat off the ledge assuming it would stop at the bottom. We listened in horror as the boat kept going, cringing as the impacts reverberated off the canyon walls. It was steep again, and totally dark. We could hear the river though, and intense desire for hydration fueled our desire to reach river level.

Okay, get the rope out again and set up for one more rappel in the dark. Thankfully this one only ended up being about thirty feet. Helping set up the rappel I set my camera bag in my boat, and in exhaustion totally forgot about it. At the bottom of the cliff I un-clipped the kayaks as they were lowered and was dismayed to find my camera bag on the ground. In the darkness it must have been lowered with my boat, falling out somewhere on the way down.

Hoping the damage wasn't too extensive I made the final push to river level with the team. 10:00pm: completion of a fourteen hour portage with one liter of water. We quickly bathed in the river, drank lots of water and ate a quick dinner, too tired to cook after a day far more exhausting than anticipated. Gratifyingly we were too tired to worry about the ominous clouds and potential rain coming in, and slept well.