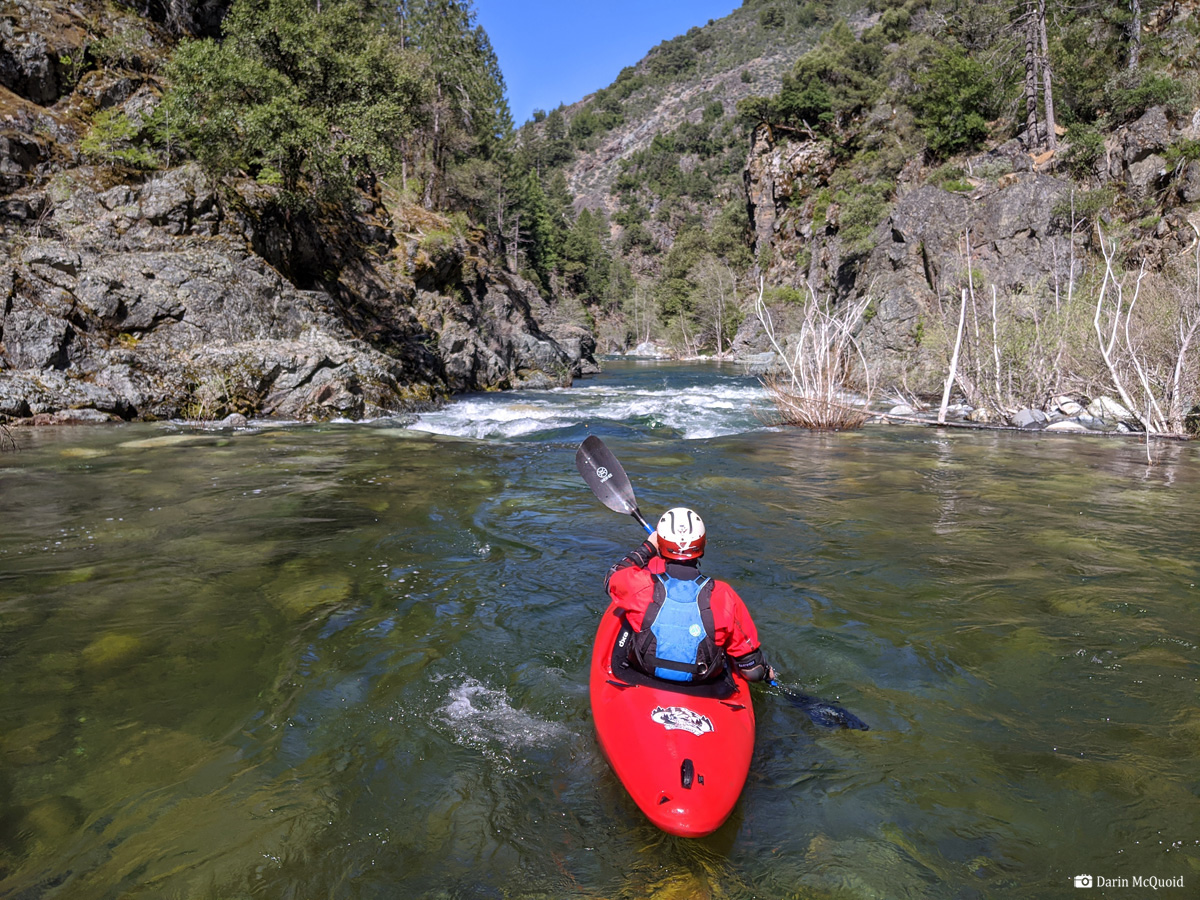 Although it's been in guidebooks as well as two online guides, the Plumbago section of the Middle Fork Yuba rarely sees visitors in kayaks. This is probably due to the lack of a real gauge, rough shuttle road, and a few rapids which are unusually hard and dangerous compared to the rest of the run - yet they can be portaged.

It's down there somewhere, the question is can we access it? Trevor Tanhoff just before the road gets steep. 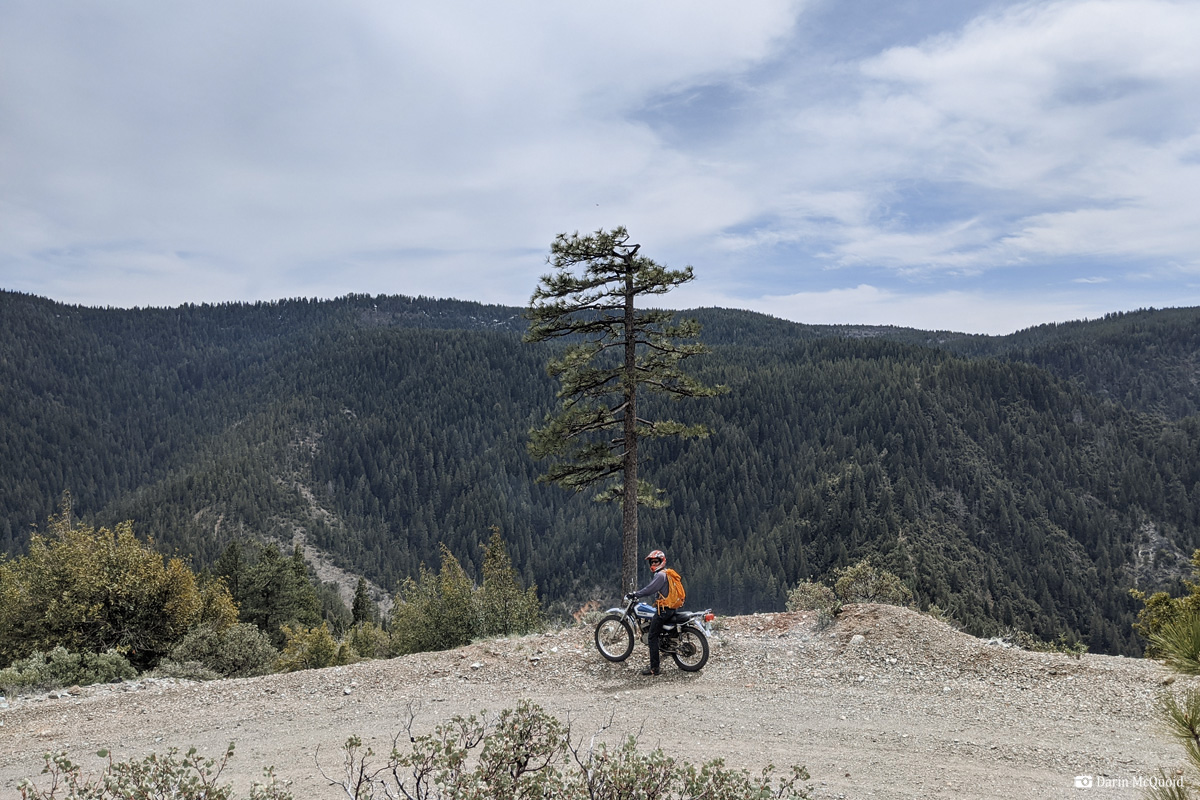 Many trees down on the roads. 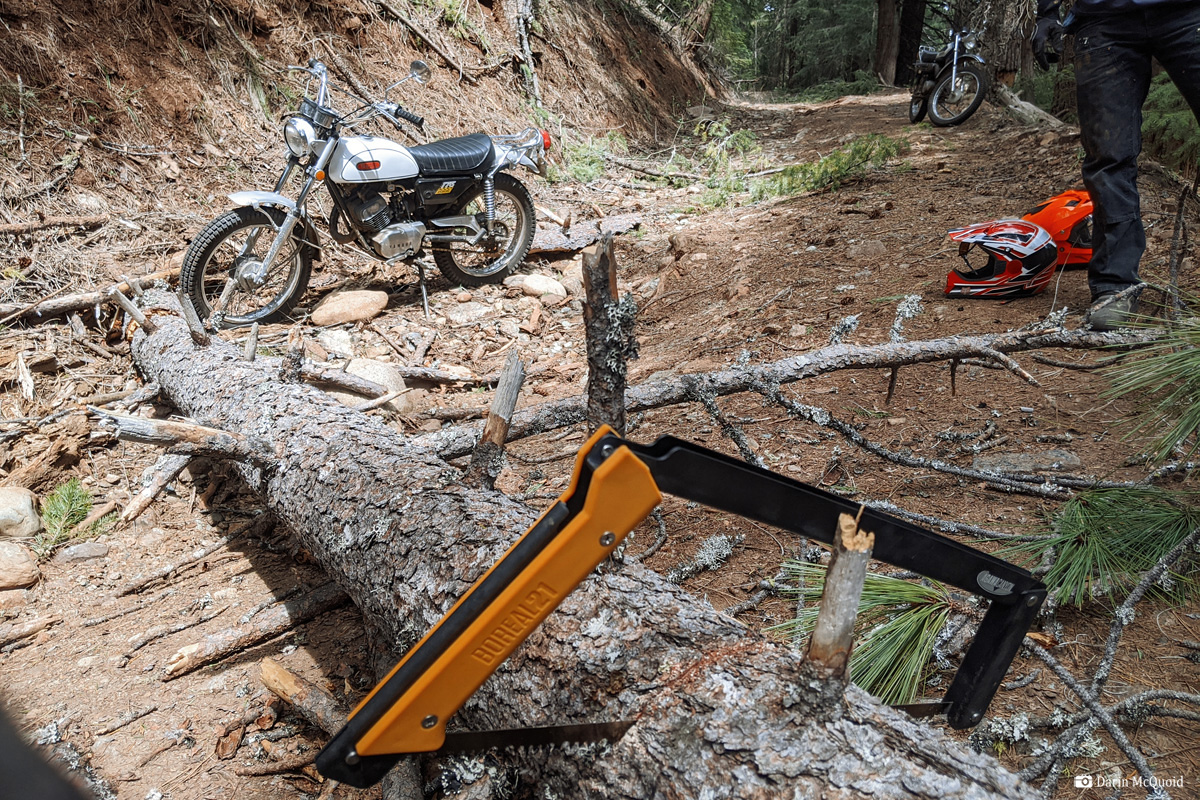 As for logistics, the last ten years have been tough for kayaking in California; roads are maintained less every year. In light of that we opted to spend an afternoon scouting access and were glad of the choice. There are a lot of roads in the area, some on maps, some not. We needed a hand saw to get into the watershed, and eventually hit a section which must have activity quite often. The closed sign is obviously old, yet this section is open some years, so it's a roll of the dice. We ran into one slide about a mile from the river, and another closer to it, both had single track weaving through the rocks. It's a top contender for steepest shuttle road in California. Not as rough as Fordyce, but some sections are more exposed, off camber with high exposure levels as a memorial marker is there to remind us. 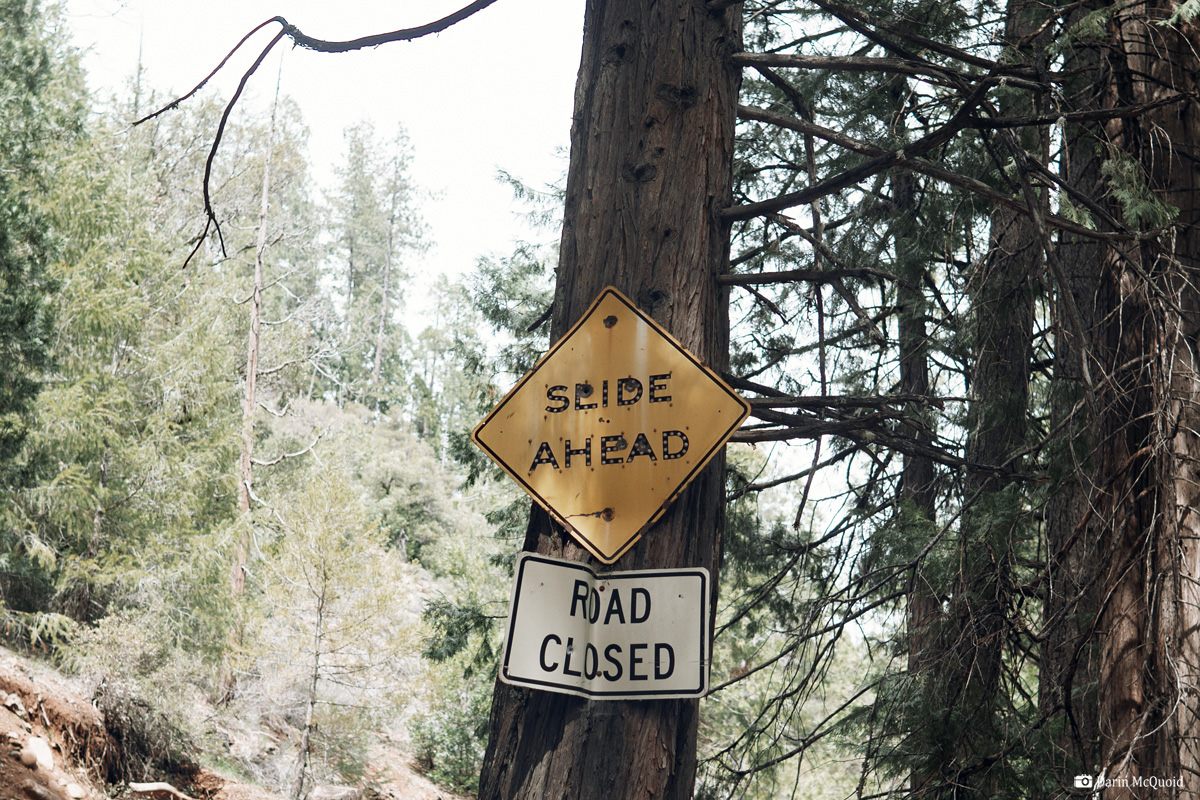 Eventually we reach the river and although the gauge indicates less than 600cfs as nothing is spilling from Our House dam, it looks like 800-1,000cfs at put in. 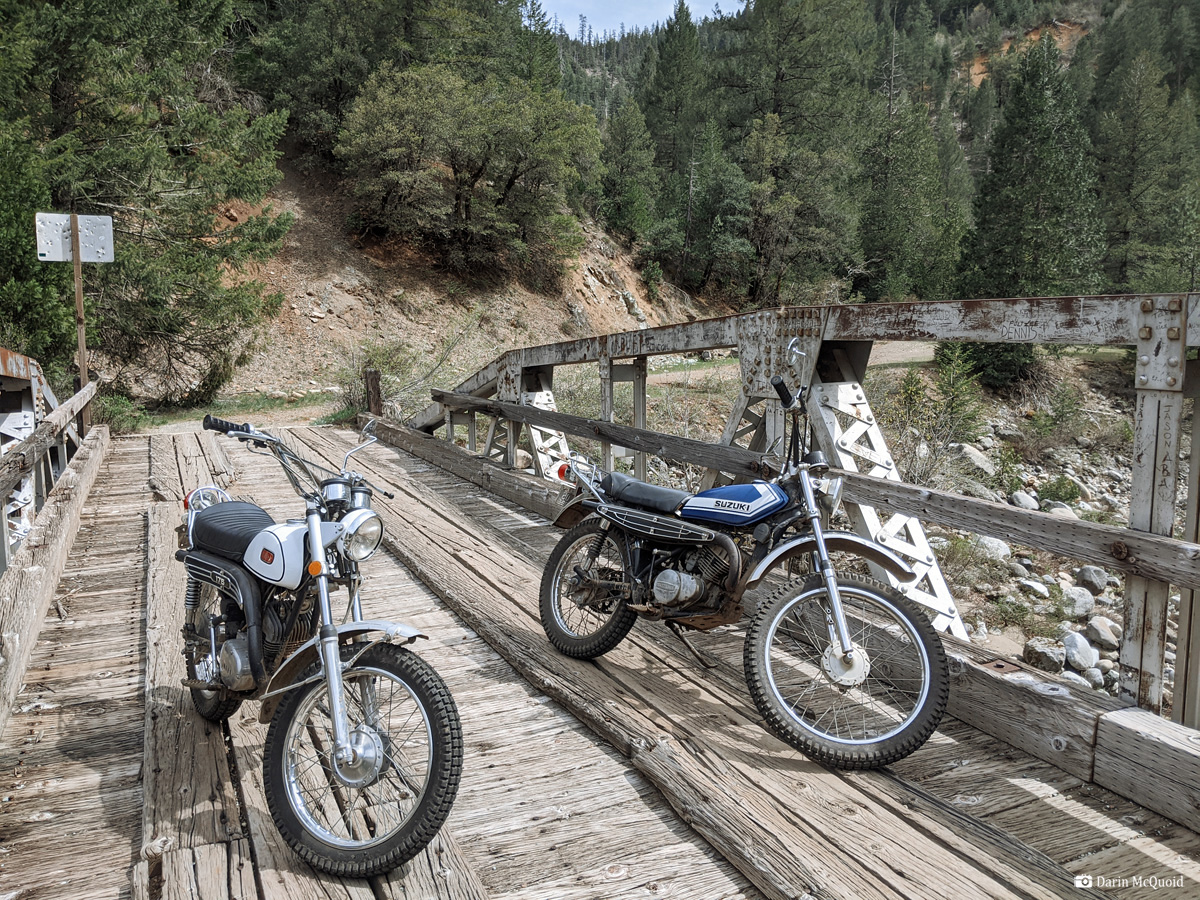 To make the following day shorter we set part of the shuttle in the evening and camp outside Allegheny, which still has snow pockets at only 4,500'. 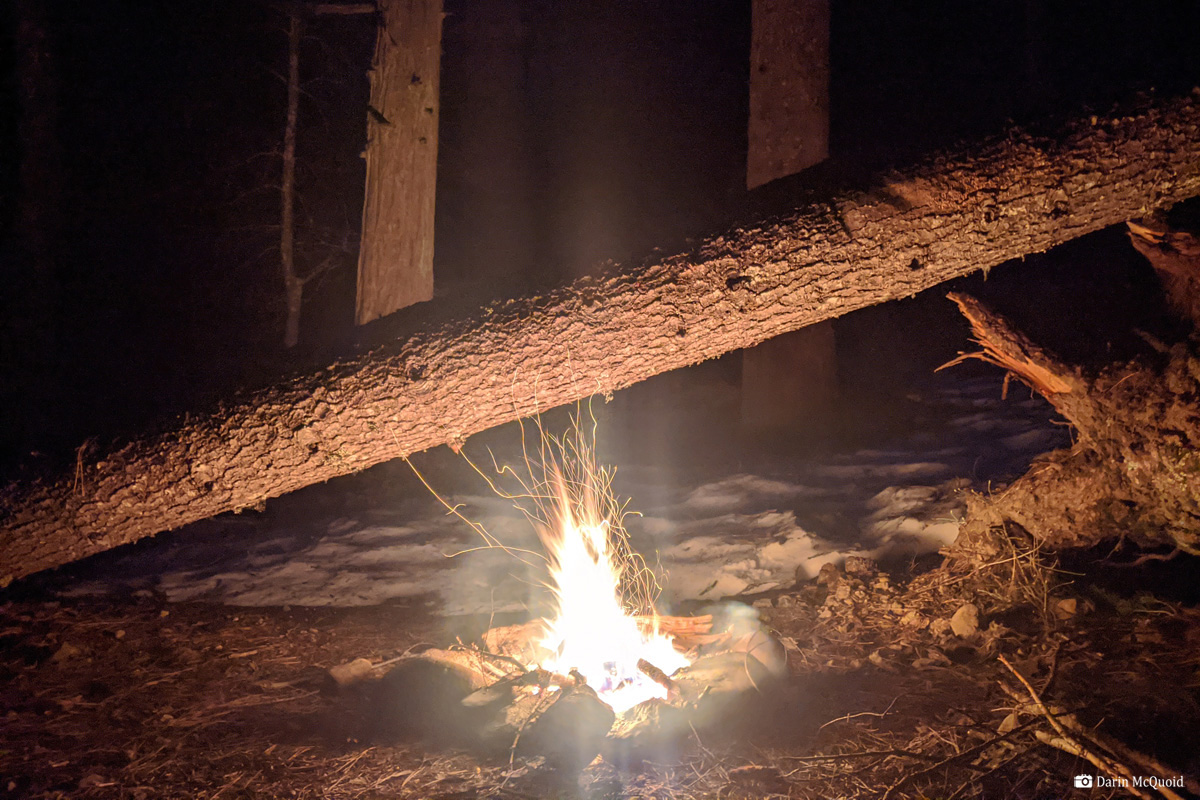 The shuttle quite rough in spots; we lightly bottom out a Trevor's Tundra and some corners require three point turns. The slide is down a narrow, steep exposed section so we park at the last switchback, which happens to be Lower Plumbago Mine. From there we start hiking down the road. 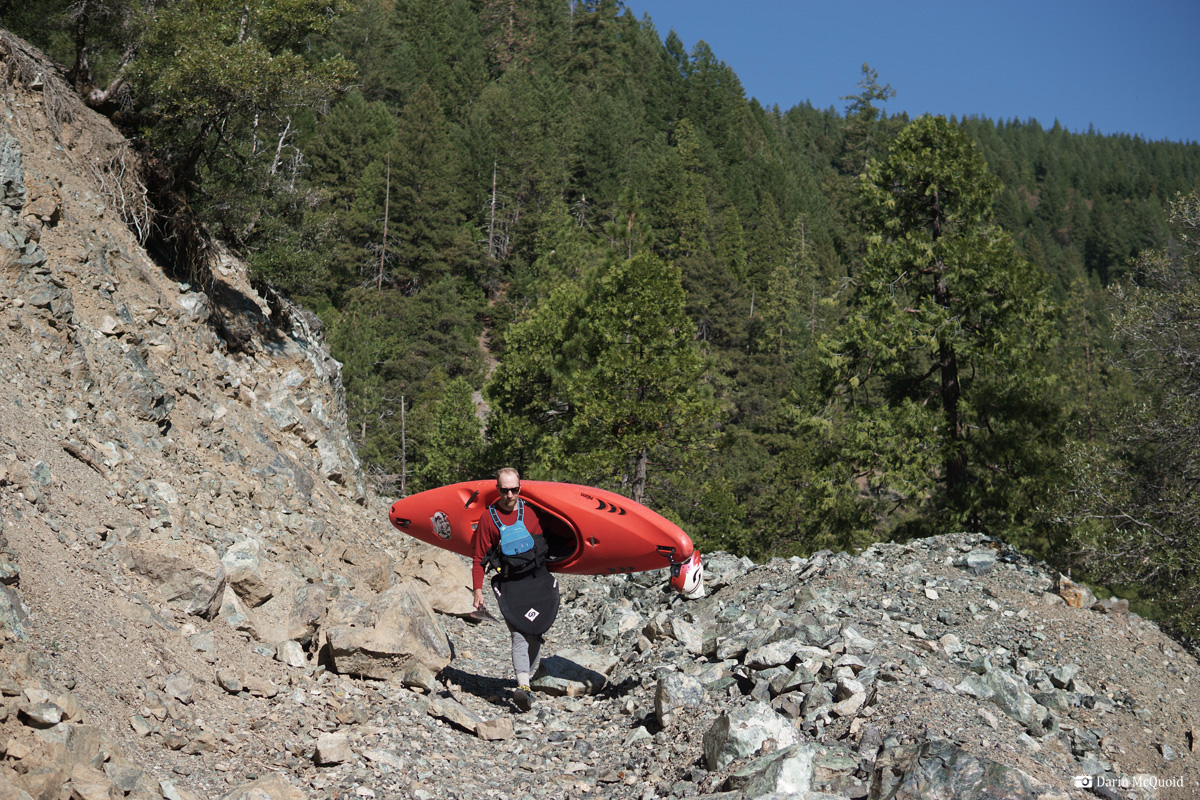 We push off around ten in the morning and float downstream, enjoying the scenery, it's a perfect mix of American and Feather River drainage scenery, just like you'd expect for the river between them. It starts off mostly class II with the occasional blind III. 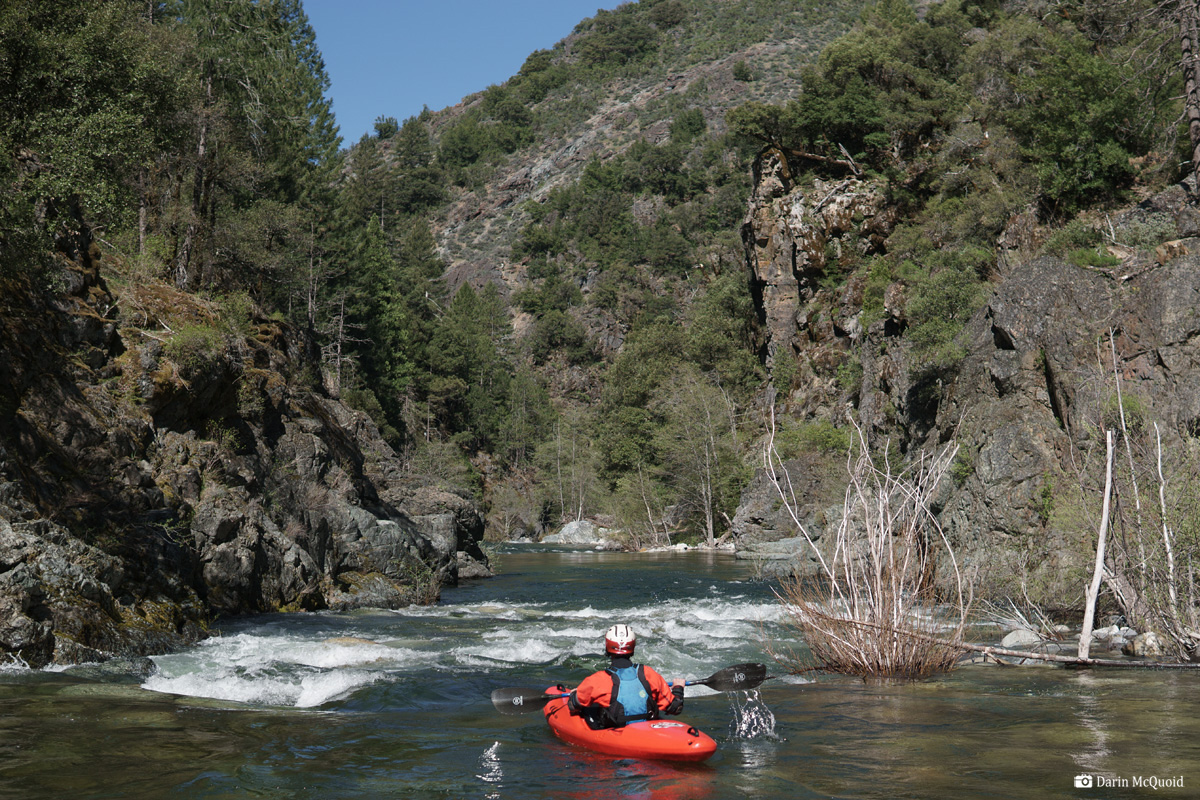 I thought I'd seen a lot of mines on Canyon Creek, but it doesn't hold a candle to the Plumbago section. Every corner has a mine, many old commercial mines with shafts and lots of equipment. 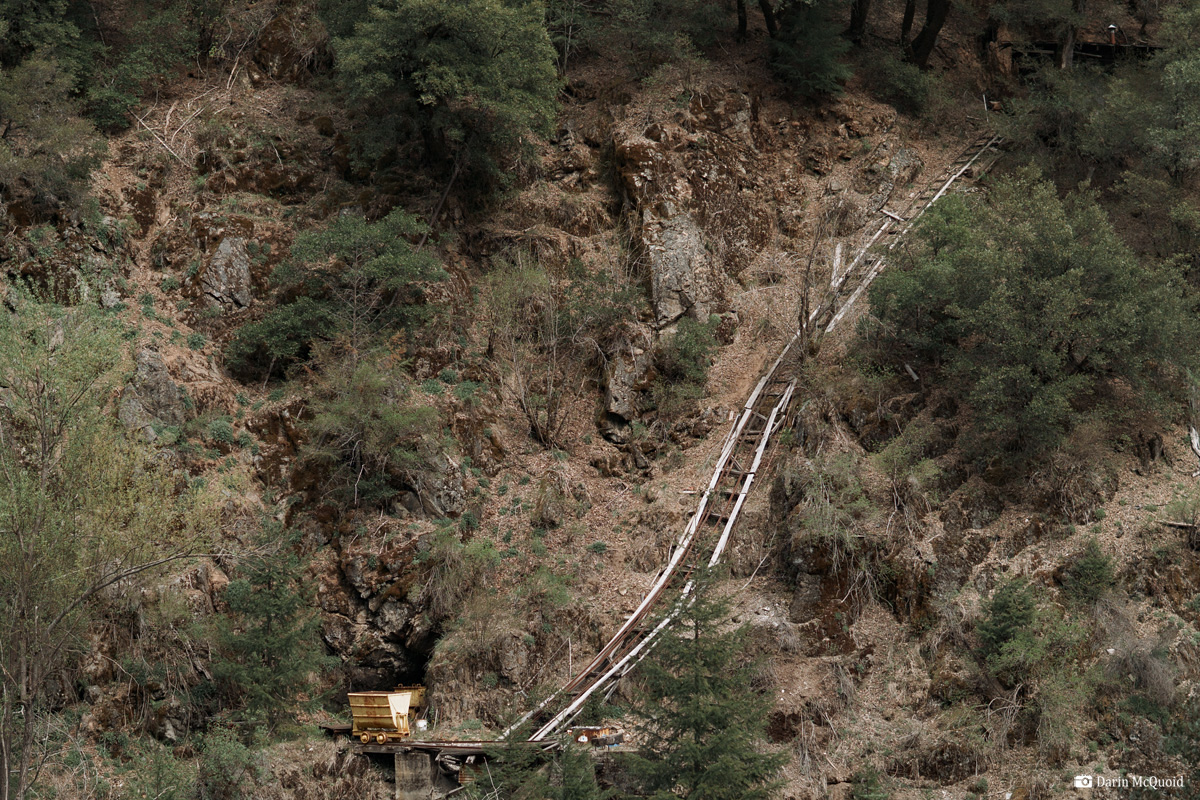 The character is surprisingly entertaining, the rapids tend to be blind and committing in nature so although it's not particularly hard, it keeps us on our toes. Just shy of four miles in we give a blind horizon a quick scout, and run a nice ledge drop. 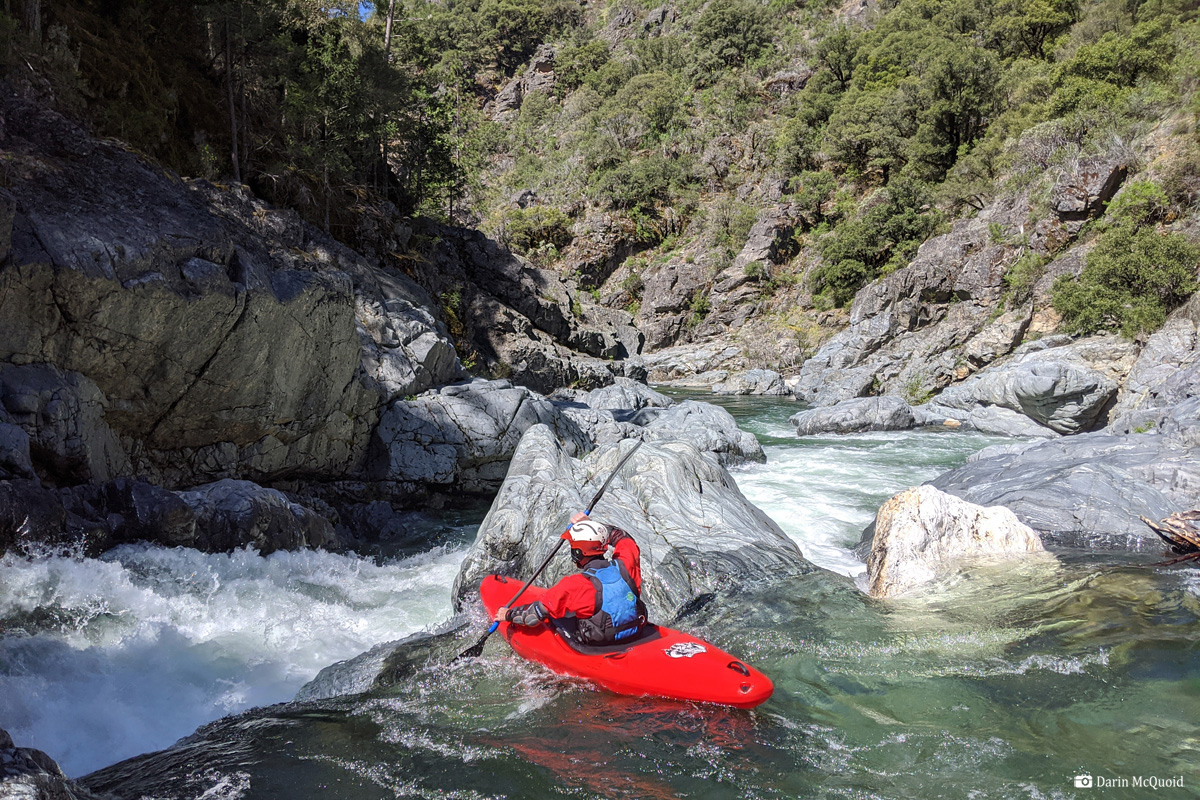 Names Portage #1 and often run at higher flows, at our flows it's just a narrow pinch into an undercut with a log jammed in it. No thanks. We make an easy portage down the left and put back in the run the bottom half.


Looking downstream from our portage, it had a quality four foot boof in the left channel, and downstream it drops out of view into "Portage 2" 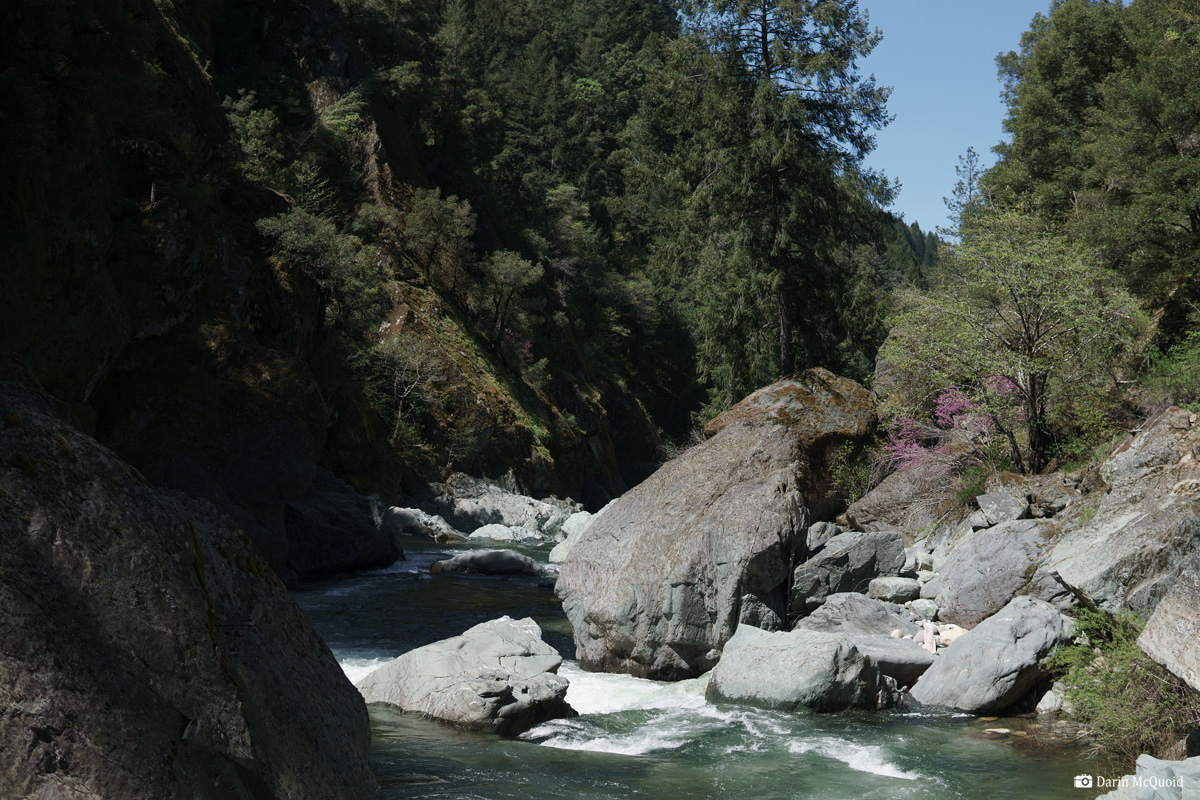 At our flow Jonas's Rapid aka Portage 2 looked good, except for a log in the move. Quite a shame as it looks like a recent addition to the rapid. 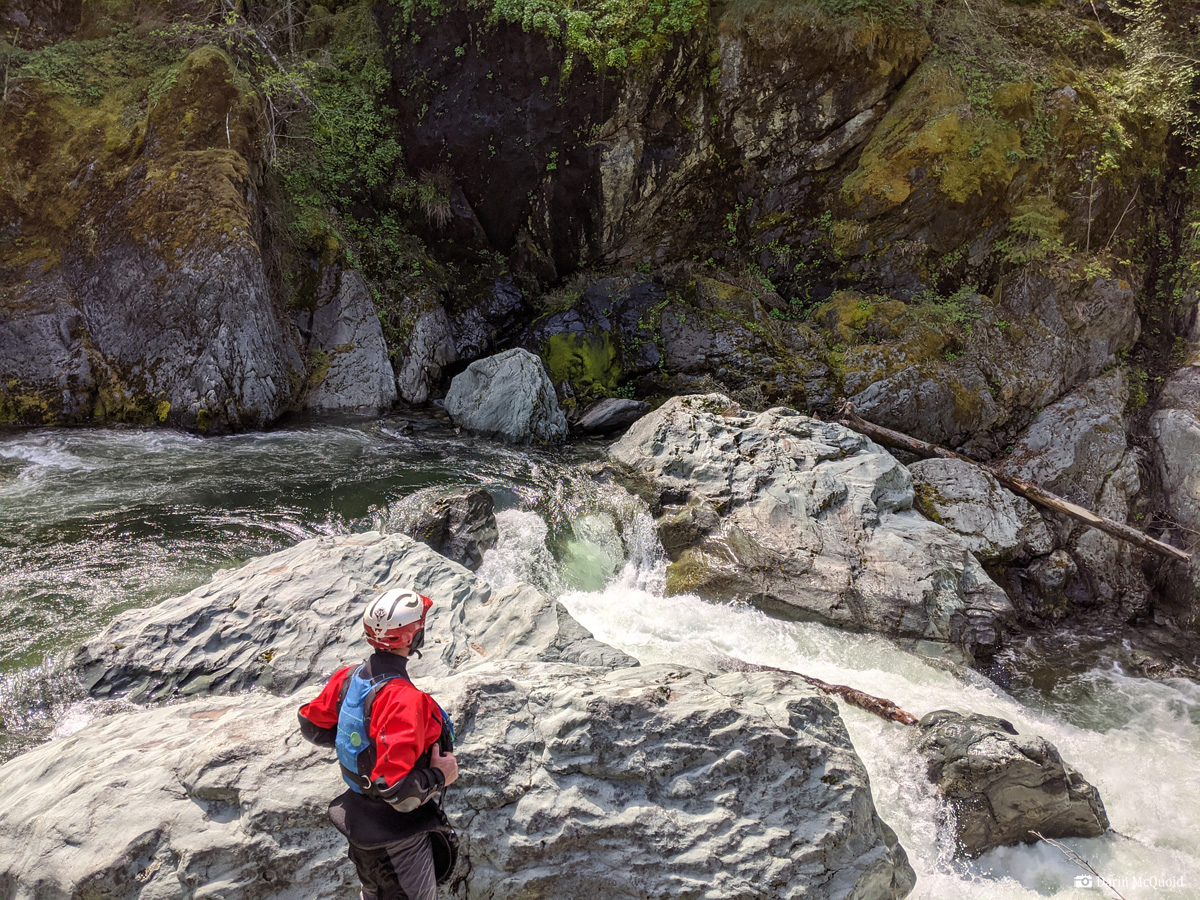 Not too far downstream we're out again for "Portage #3" which has an obvious move, and is more photogenic than quality paddling. Trevor Tanhoff makes the first move. 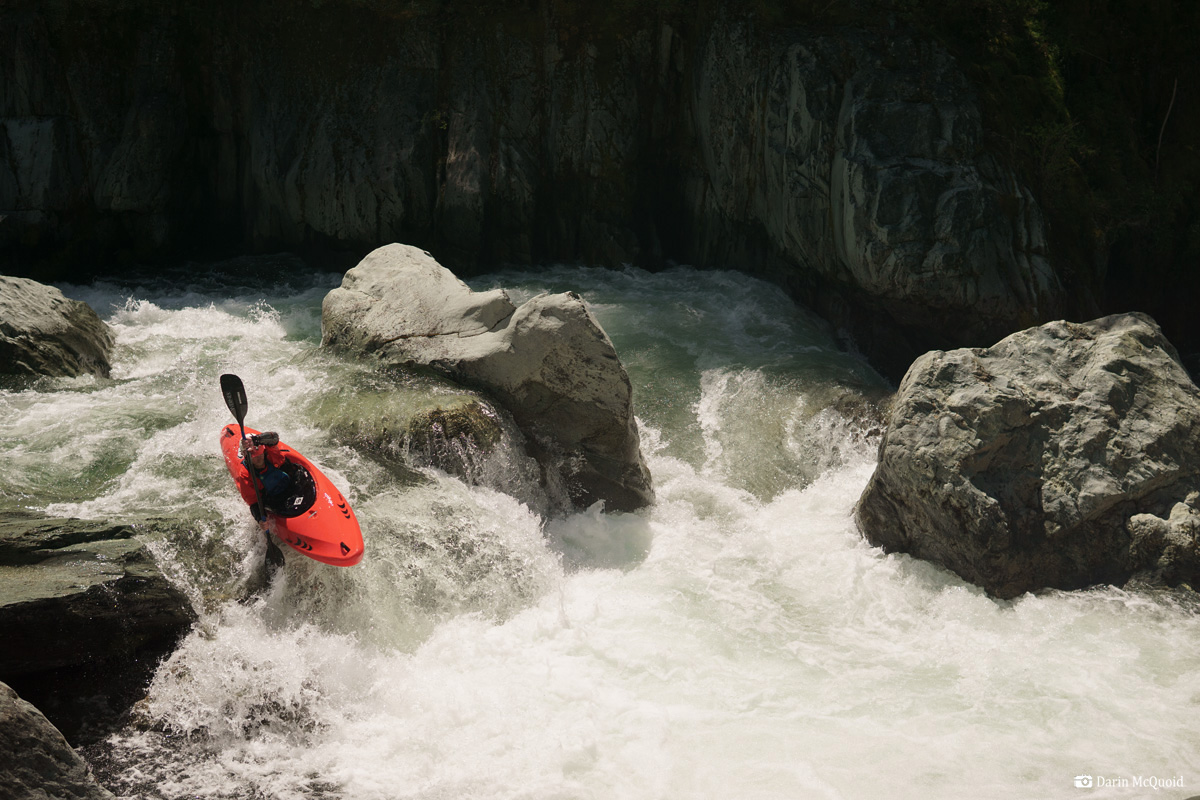 For the second move we opt for the far right channel. 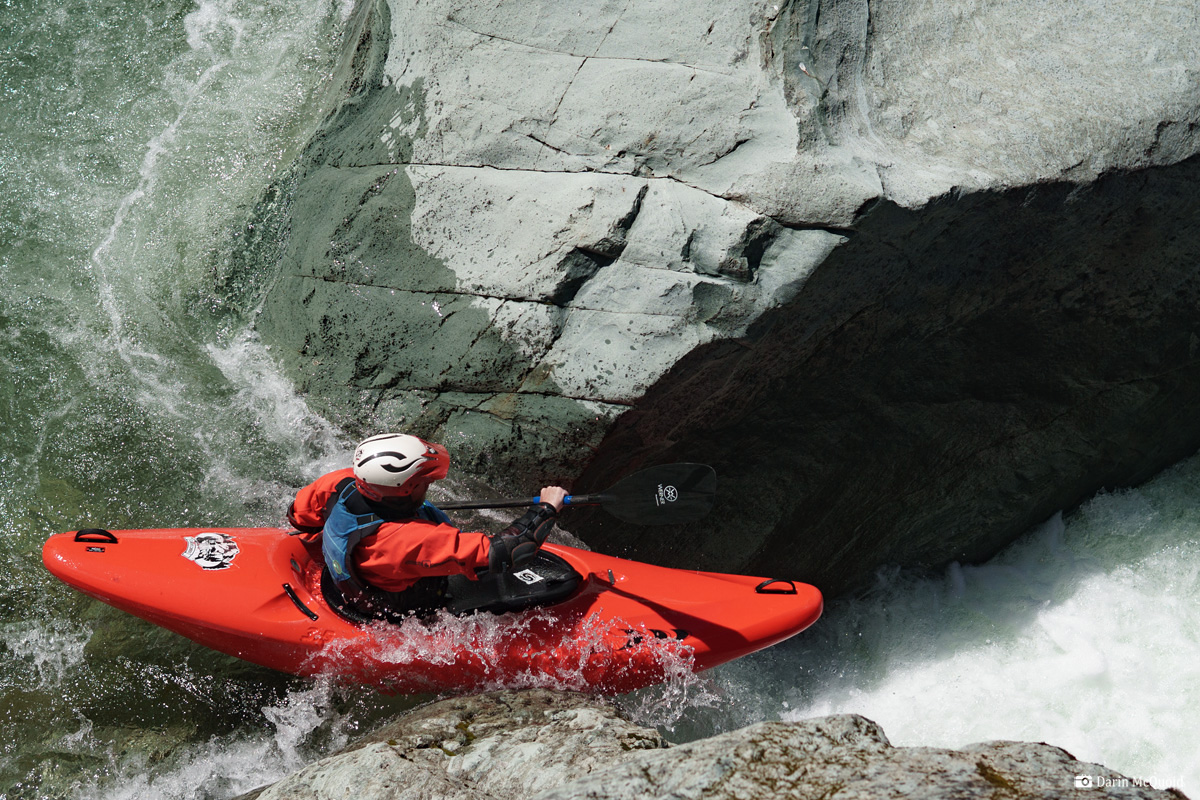 What does more photogenic than quality paddling mean? Hopefully this sums it up, same rapid with a wide view. 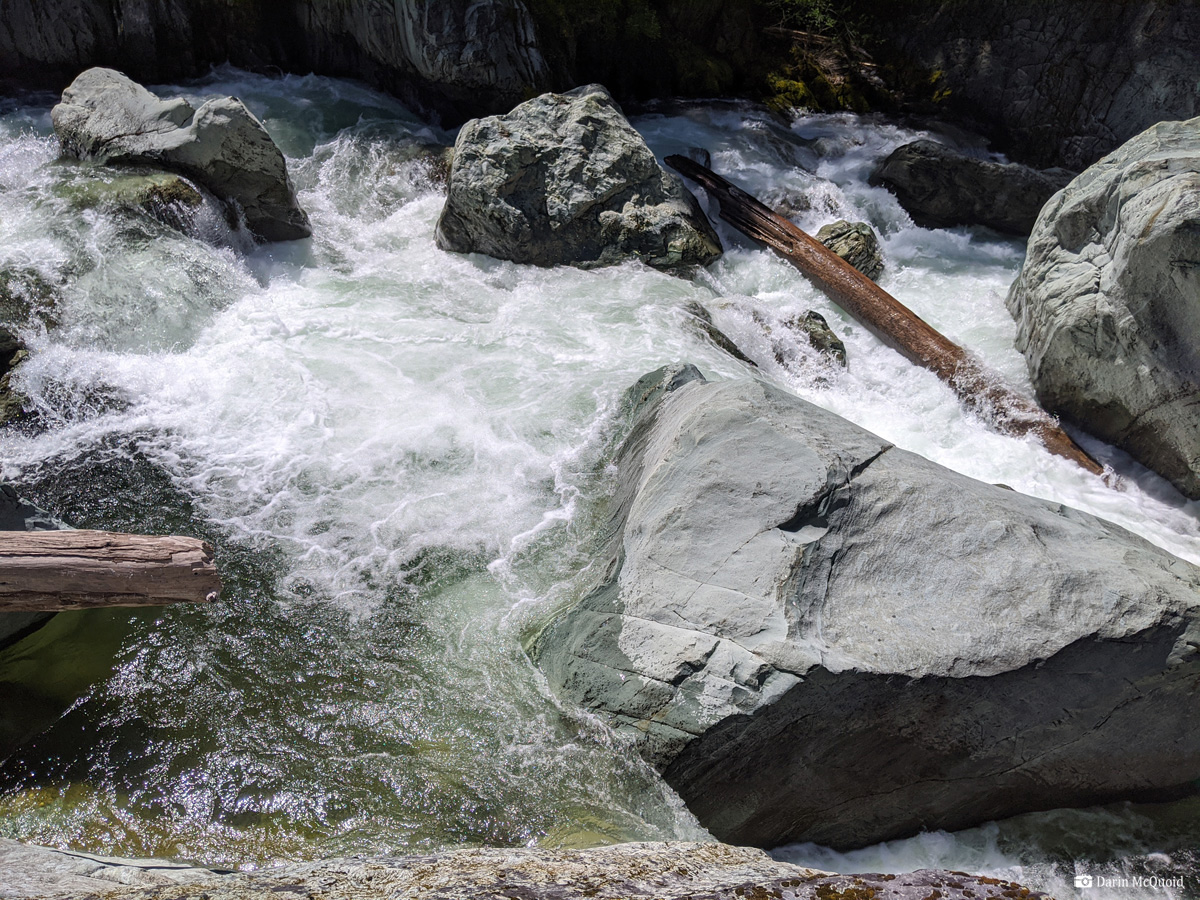 Looking downstream it's really a beautiful canyon the entire way. 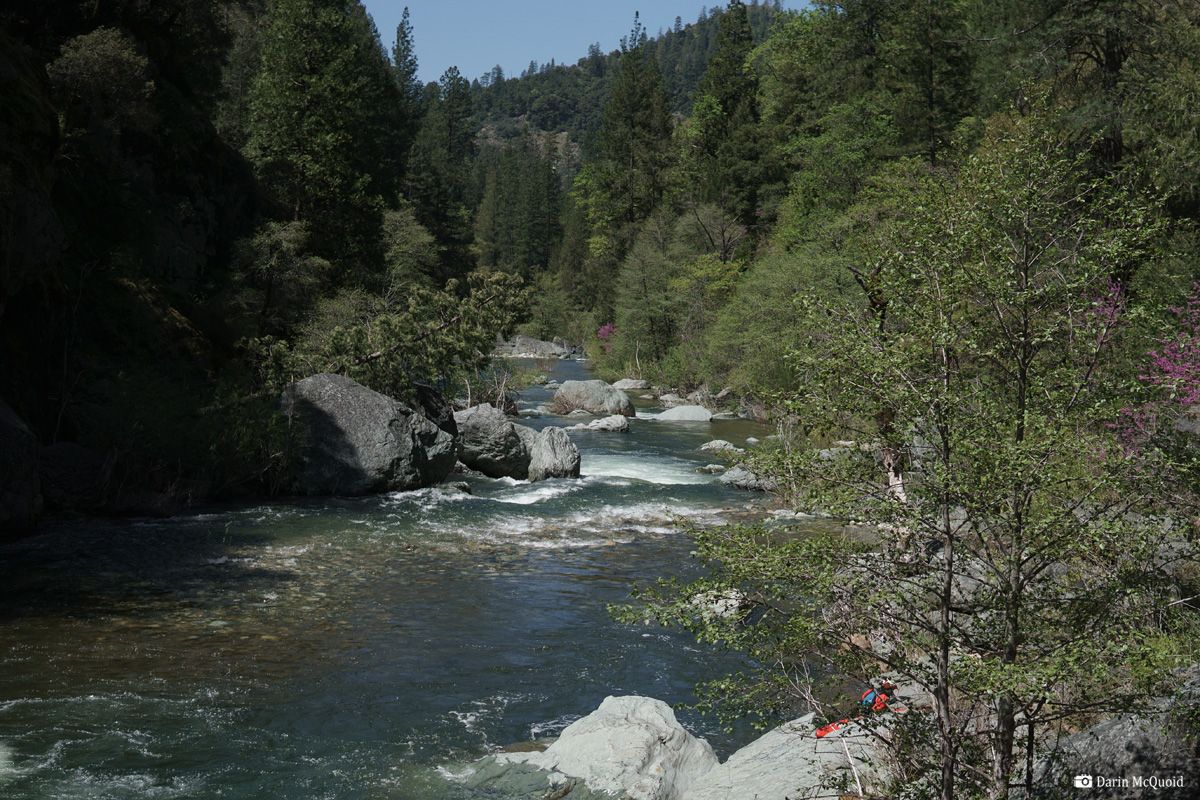 Initially after "Portage #3" the river was a bit too rocky, eventually it cleaned up and got really good for the last mile above Kanaka Creek, where we stop for lunch at 1:30pm, three and a half hours of paddling and floating roughly ten miles to here. 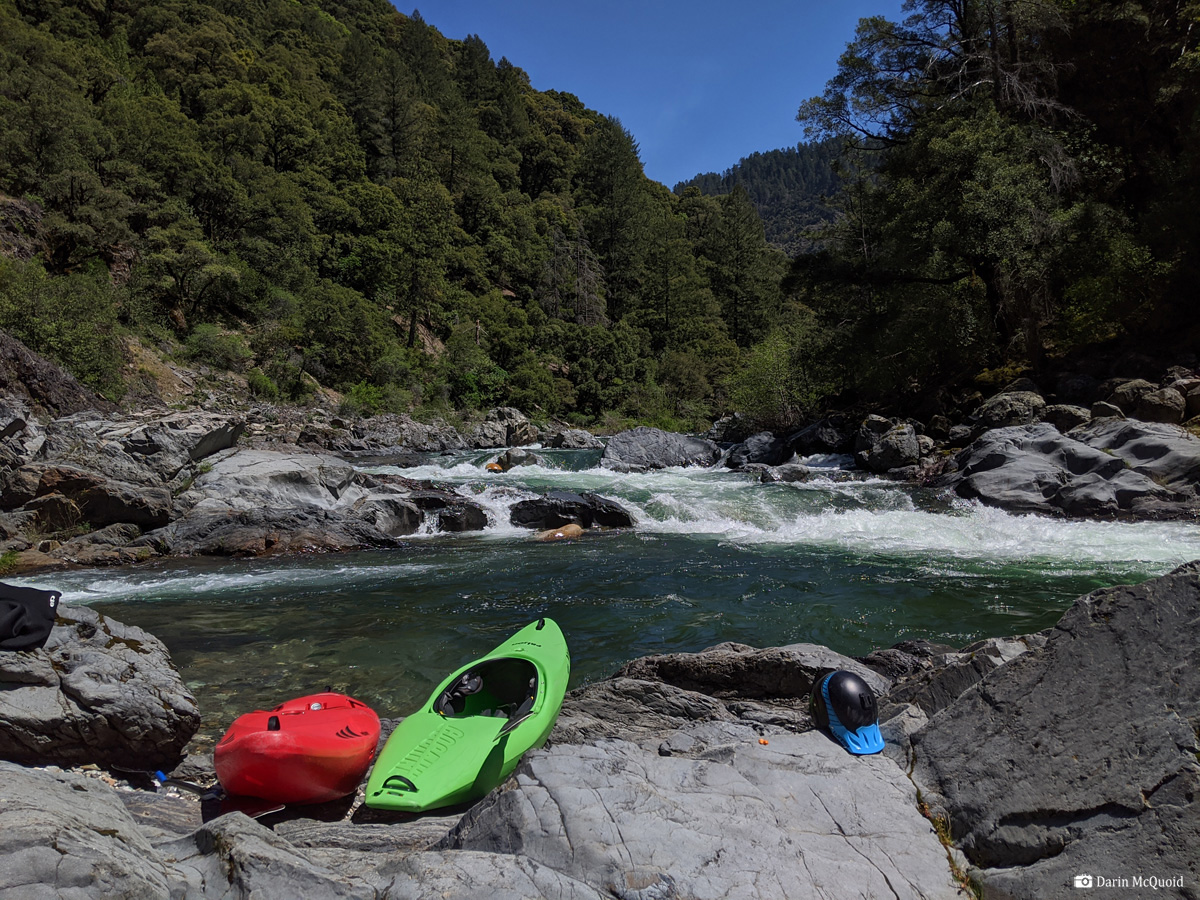 Not much happens in the next three miles. Tyler Foote road would be a better take out, but it's rough and rocky too. Overall it's faster just to paddle down to Our House dam. Just don't miss the takeout or you'll get some extra walking! 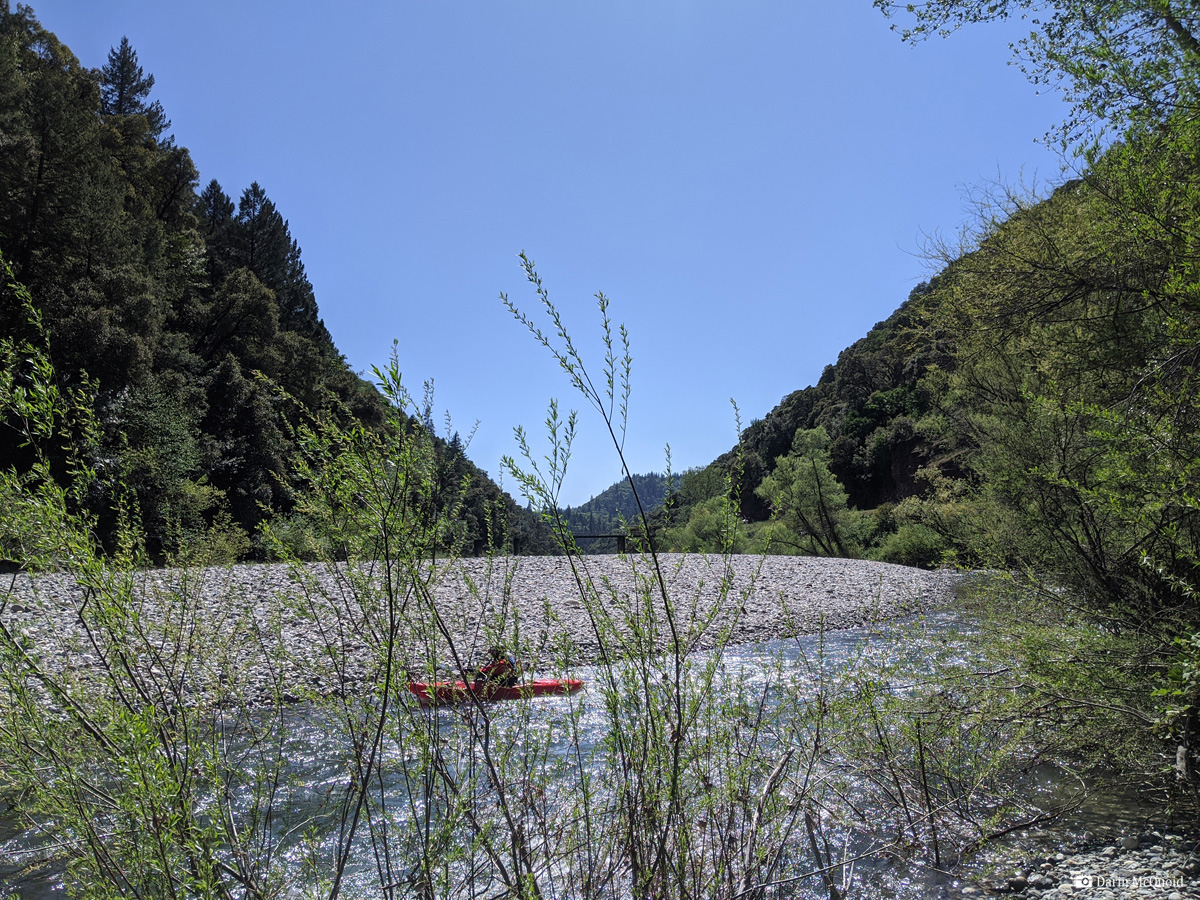 What exactly is Plumbago to Our House? It's one of the hardest runs to rate in my opinion. With a few portages it's a rare thing for California; long, remote class III-IV. On the other hand it has a few class V rapids that are not nice, so class V boaters don't flock to it. As it would not be an easy canyon to walk out of, and the rapids tend to be blind, it's probably not a wise place to push your limits as a class III-IV boater. In a way, it could be an absolute classic for III-IV boaters with a class V guide, if the group has an adventure/expedition mindset. Outside of that, it's well worth doing once, but probably only once for me. I don't know what's going on with the gauge. We certainly had more than 600cfs on the river.

Shuttle may be faster on river left; we took a peek at it from put in and there were a few downed trees across the road so we turned around. In 2010 Daniel's group took a Toyota Highlander down, not sure you could do that today as the road has deteriorated.

Gauge: Middle Yuba above Our House Dam.
Alternate beta: A Wet State, California Creeks (take theirs with a gain of salt).

Put in and Take out on Google Maps. 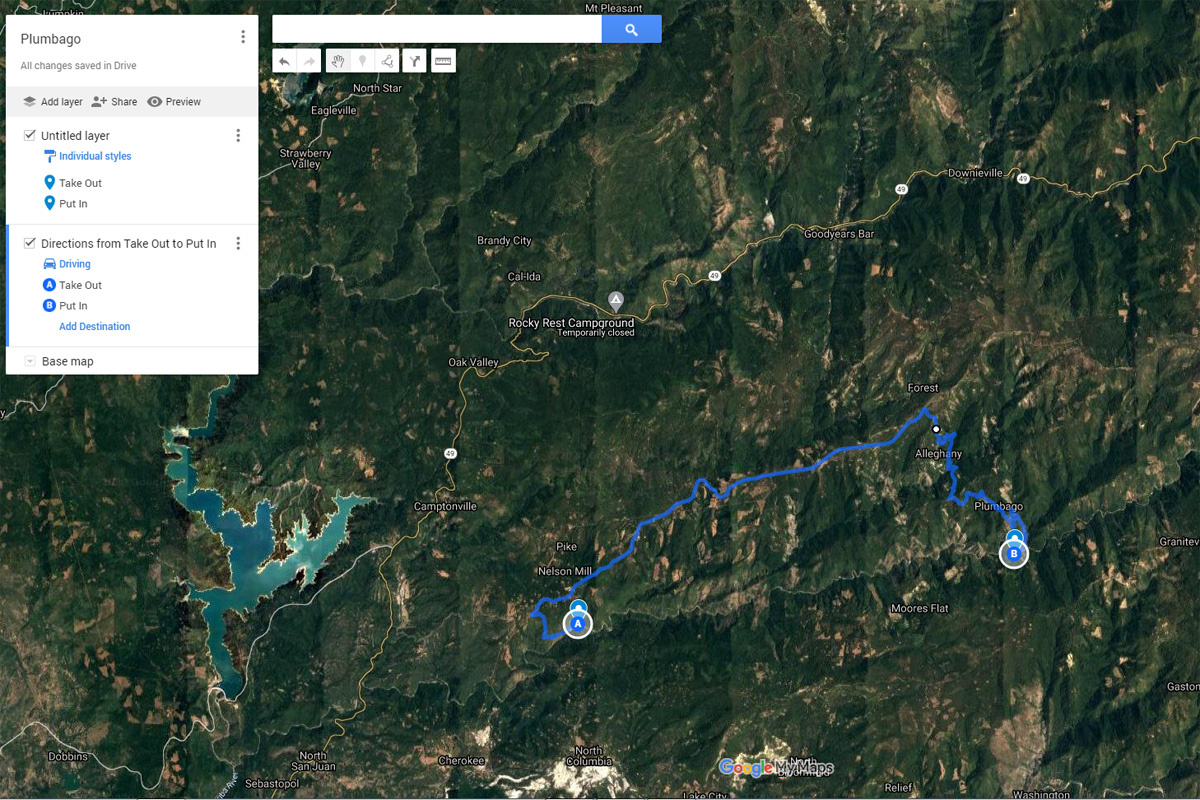