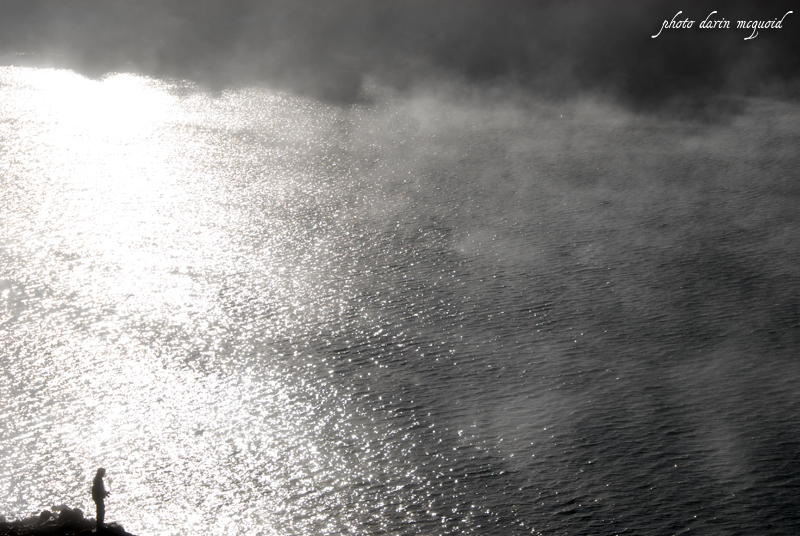 The South Fork of the Feather River gets a fall release that was once hard to keep track of. Thankfully the South Fork Water & Power agency has been very helpful providing flow information, and accommodating us with ideal flows. Postings on boof and dreamflows take care of the flow updates. People argue a little bit of the rating of this run, I'd give a general class IV-V rating. It's on par with most the IV-V runs in "Best Whitewater of California".


Our plan was simple, drive down fairly early Saturday and meet up with two people we didn't know but had arranged contact with, find the take-out, find the put-in and do the run. Sunday, meet up with a few more new to us people, shuttle and do the run once more, hopefully going slow and taking lots of pictures. Things of course never do go to plan. We managed to get moving out of Redding at 10am, and met Thomas, Ben and Stacy at a casino in Oroville. Off to the take-out we were. What a mess of roads, with three different maps we still struggled to find it around 1:45. Off to the put-in, which involved a myriad of dirt roads, most of which didn't exist on maps. We still managed to make it in just over an hour. While gearing up we saw two kayakers hiking with boats in the canyon, and I thought "hey maybe someone else is putting on as late as we are". By the time we were all geared up and had just started down the trail we talked to the two guys hiking out. They said their group of five had started at 12:30, suffered a swim that ended up taking a half hour, and were making slow progress so they hiked out while the rest continued. It was now 3:30, and that combined with a lot of small events made me debate putting on (small delays all day, bad weather, someone forgot their base layers, I forgot my throw-rope) Thomas, Ben and Jon all were game for it, but I opted out sensing a epic. With my decision made Jon decided to stick together and backed out as well. We wished Thomas and Ben luck and rode with Stacy back to our car and camping gear at the Diversion Dam.
We setup camp and sat around until dark at 7:00, surprised to see no one from the 12:30 group that had gone for it. About 7:45 the Thomas and Ben showed up in a truck with the two guys that hiked out earlier. Eventually the other three came into camp late that night in back of a hunters truck after a hike-out in the dark.


The first gorge from above, typically nice and cold! 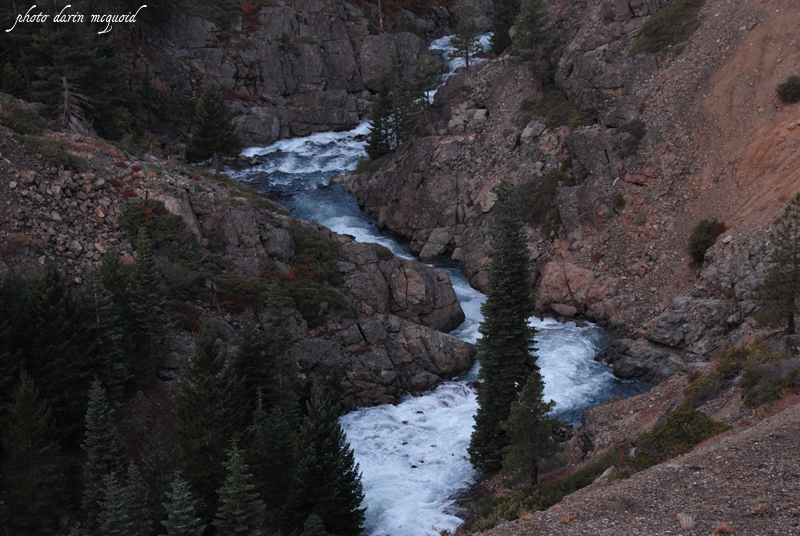 Sunday morning came around and we shuttled with the hike-out group back to their hike, and Josh, one of the early hikers from Saturday joined us on the run. We put-in at 11:30 and were focused on going fast, so I didn't get a lot of pictures. Let me just say the first 10' fall has an awesome boof on the left that is super fun.

The author, not missing the boof for a change...go right on the run out rapid, the left is sticky. 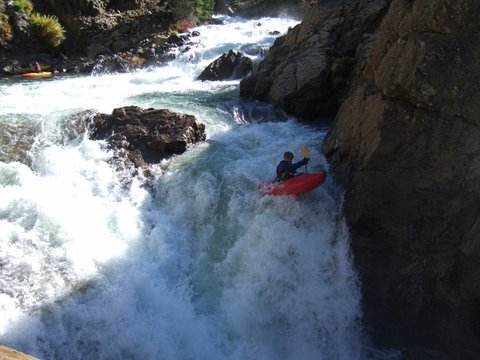 Photo thanks to Kevin Smith.

The warm up falls from above. Surprisingly the right undercut isn't that in play. Jesse Coombs. 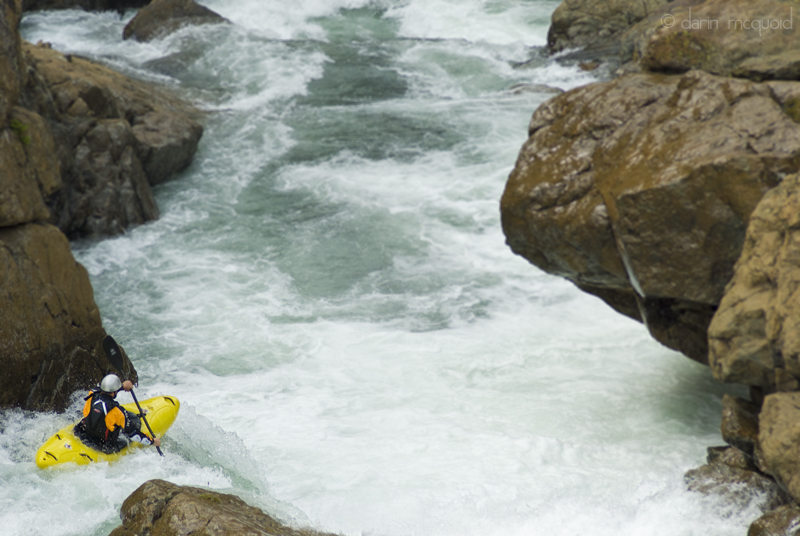 Justin Pat airing it out. 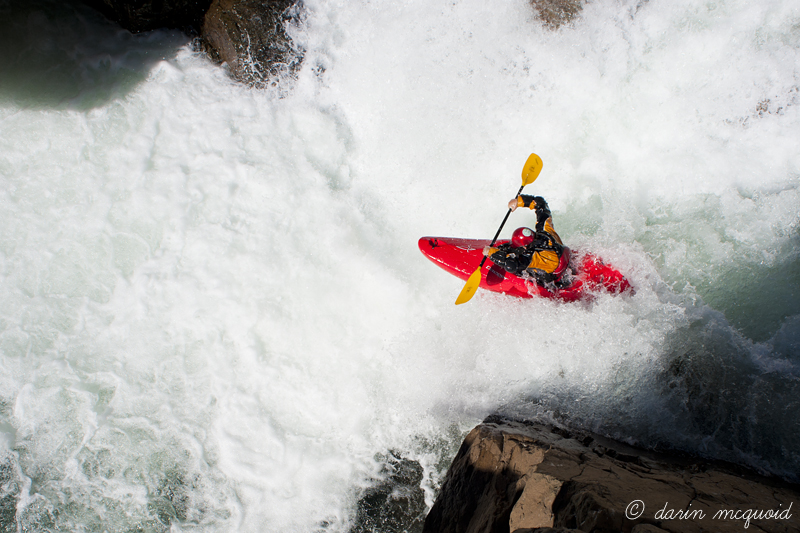 There is one mank rapid between the fist set and "Mad Dog". It can be run right or left, but once below be ready to catch a large eddy on the left, or smaller one on the right.


Jon Vengley runs the left side of the second half of Mad Dog. 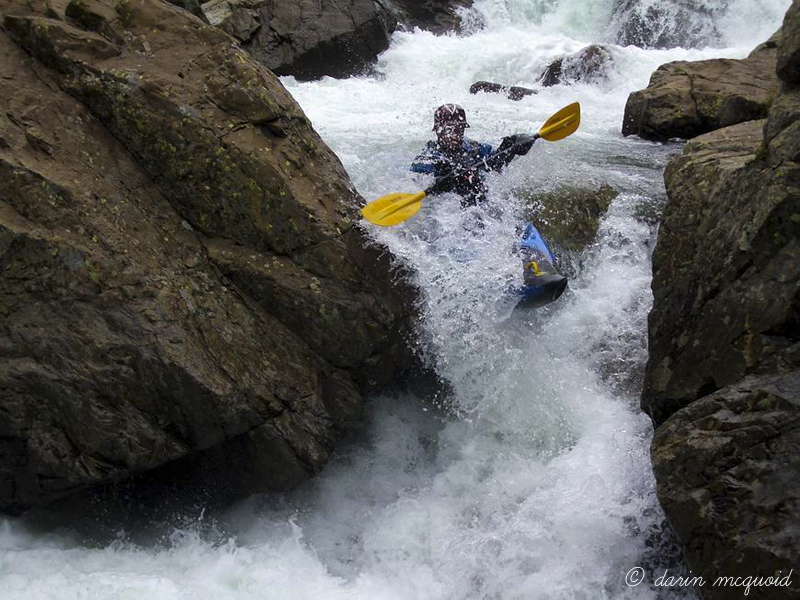 The above drop is still often portaged and has earned the name "Mad Dog". I used to run it left and left, but have since been converted to the very nice line down the right up top and at the bottom. It is much cleaner than it looks like...as long as you are upright.


Looking back up at the Mad Dog 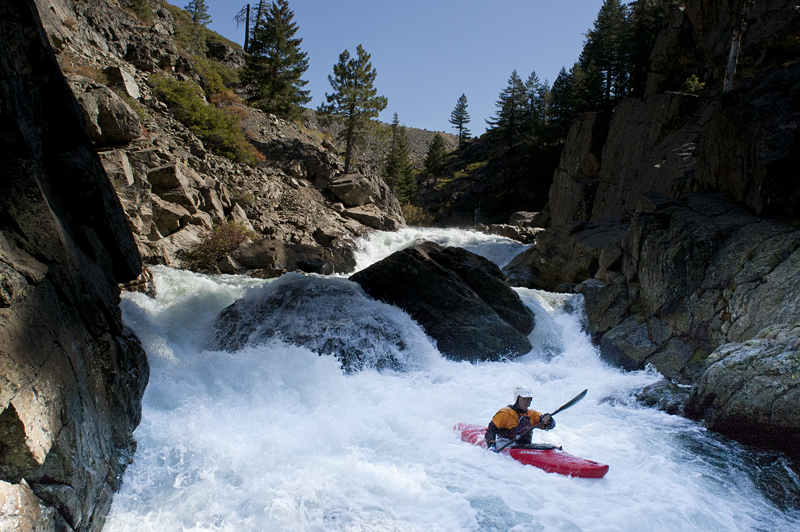 After running or portaging Mad Dog (on the right) be ready to exit the next rapid on the right. The left can give up some incredible rodeo moves, and the pool below flows into the "30 footer portage"


Just around the corner and we were at the 30' waterfall that is said to be shallow. Very temping during the quick portage on the right. 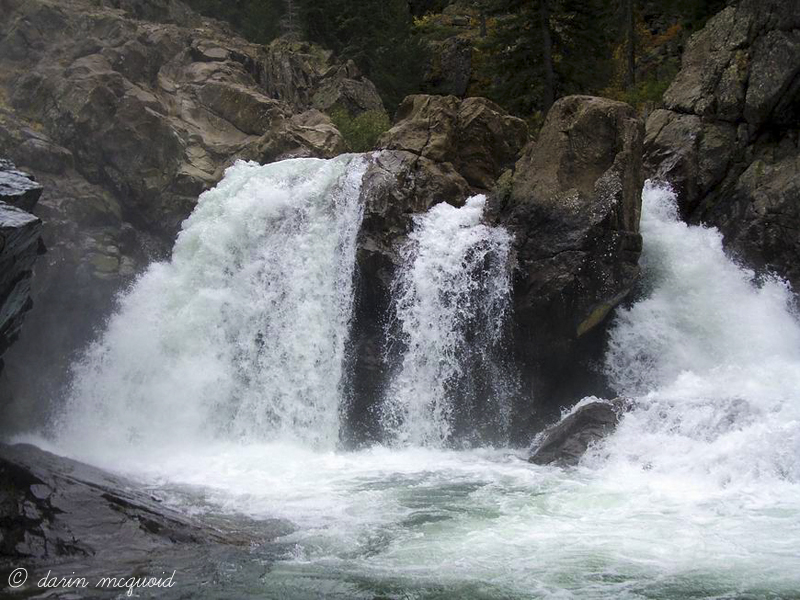 The waterfall is shallow, after the first descent/broken boat incident, Rusty Sage was able to walk all the way across the base of the falls. Taylor Robertson got tired of the portage a few years later and ran it. Be sure to get that delayed boof! 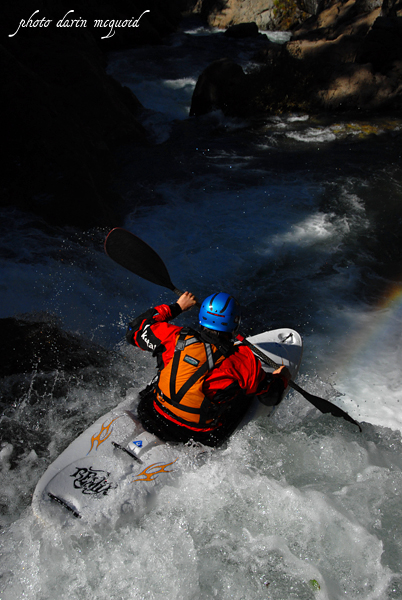 Darin McQuoid with a similar line. 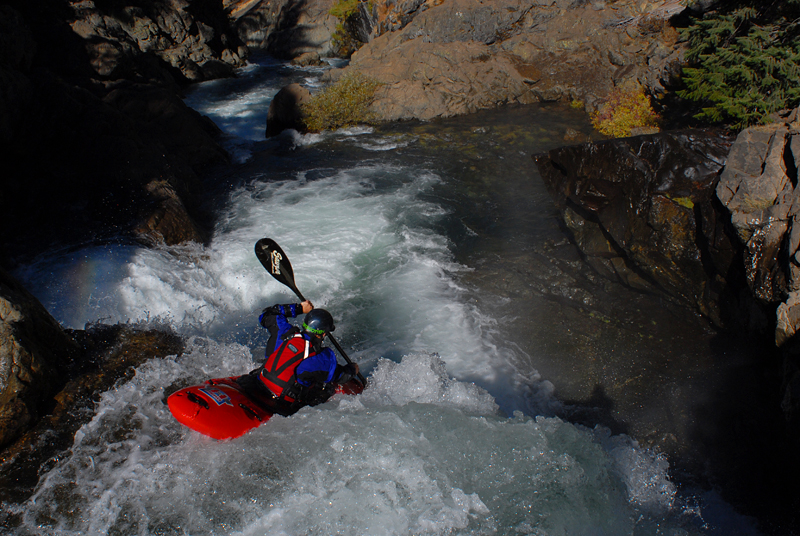 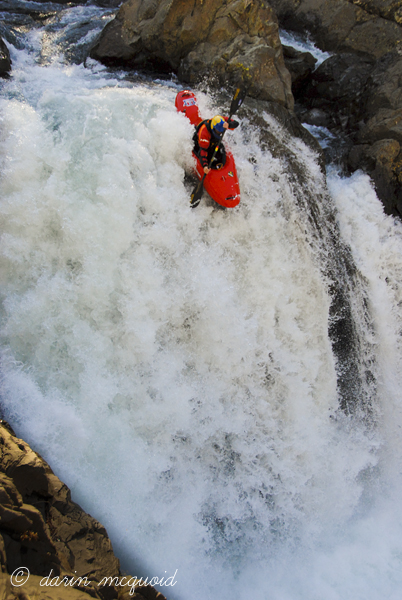 Below the falls two good rapids come in succession, one a narrow slot seen in this video, and one a nice big ledge drop. Some people go for the left boof on this, but if you miss it you end up under the ledge. Jon plugged it moving right, and I did a delayed boof moving right and we both cleared any backwash fine. I currently prefer the left side boof. 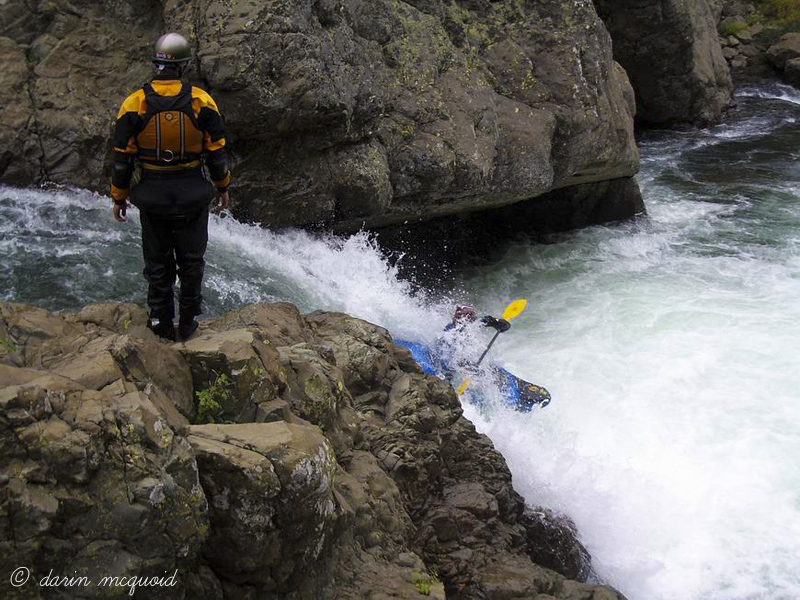 This section is really quite stacked and class V in character. Andrew Pernicano 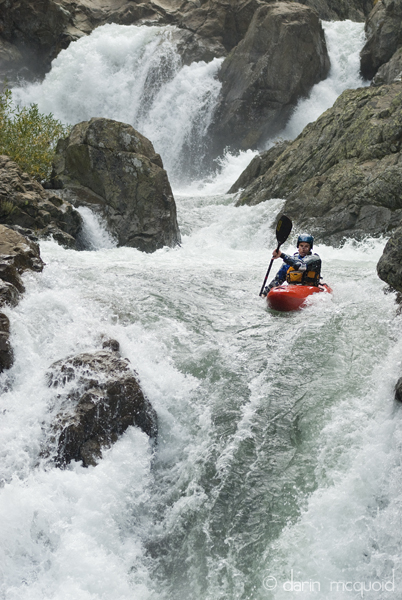 Below the ledge is one more exit rapid to the gorge, then a fast II-III section lasts for about a mile.


Taylor Robertson enjoys the ledge on a wonderful October day. 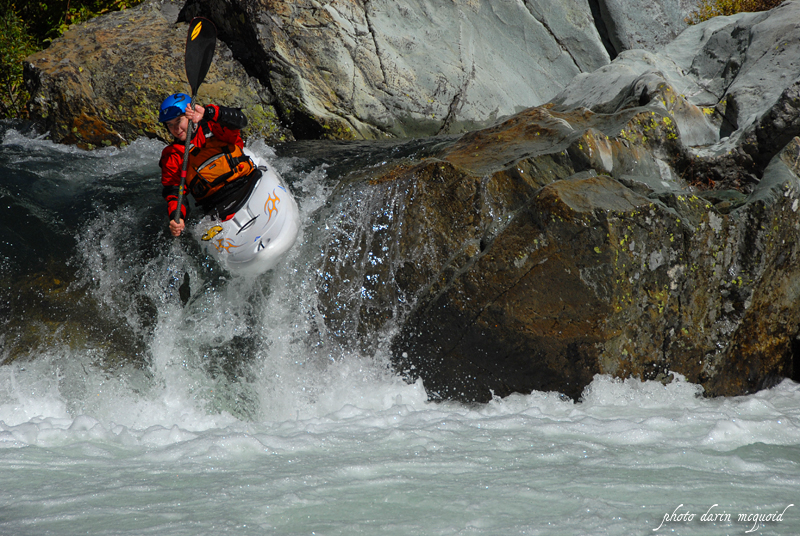 Danny Salazar on the same. 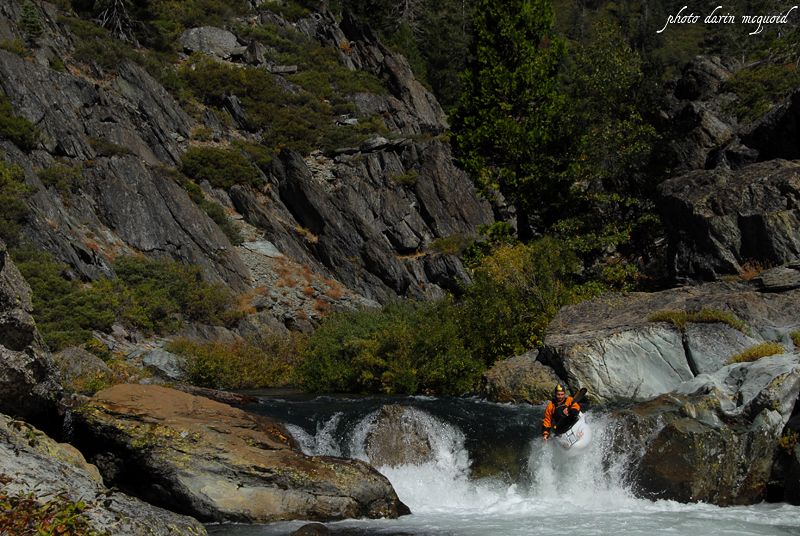 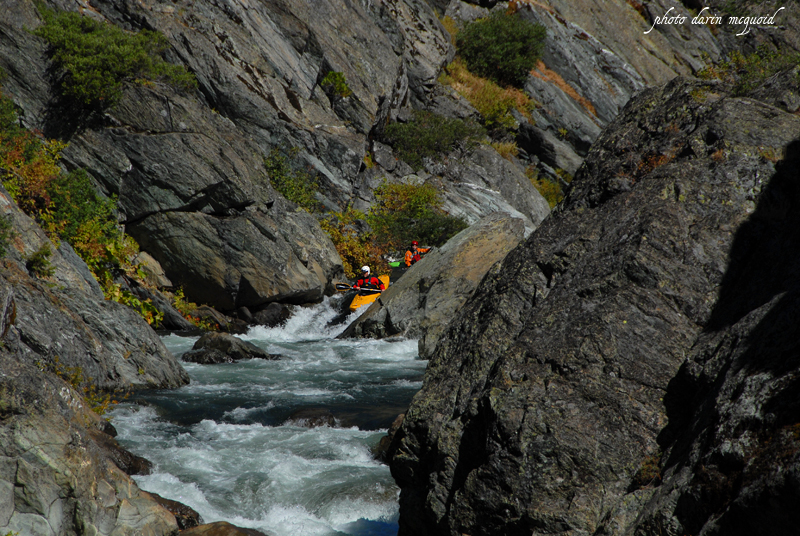 At the bottom of a rapid, Trever being a good team player and checking on Ryan. 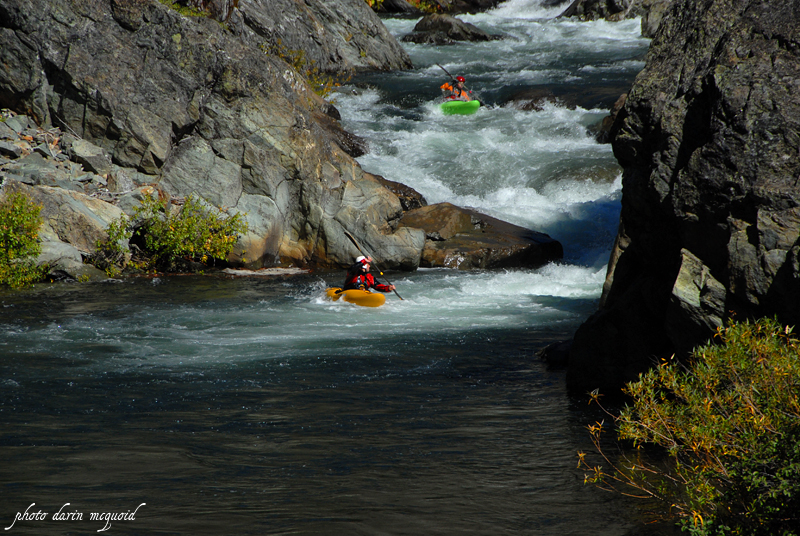 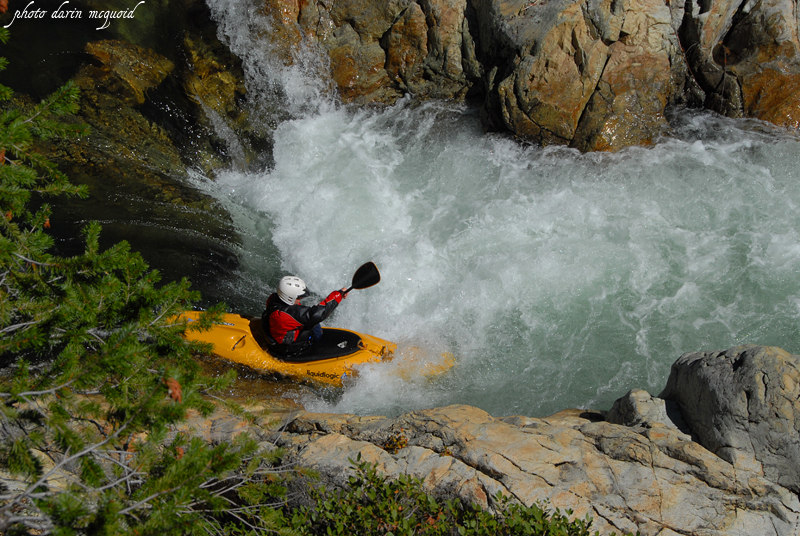 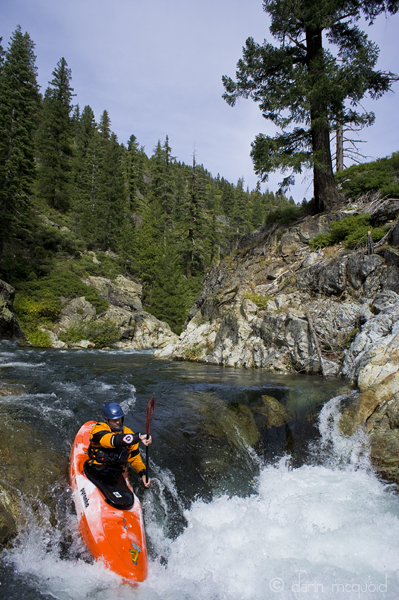 Dianne Gaydos on one of the "big three" below the first gorge. 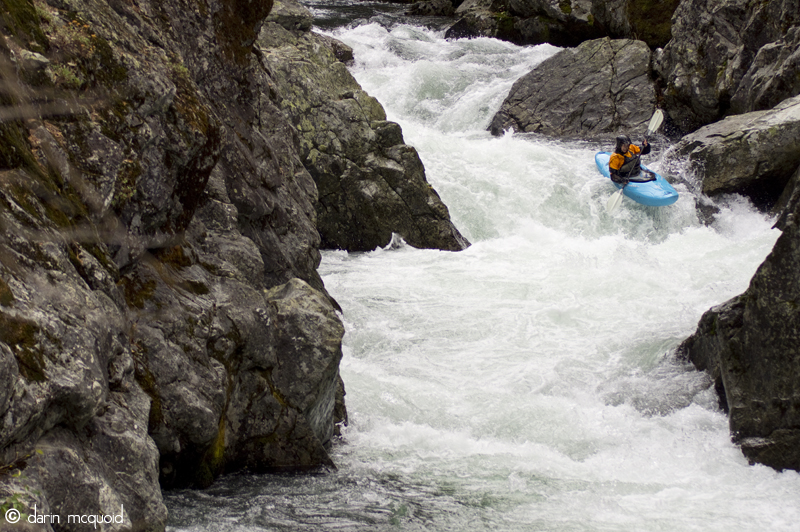 A few rapids further down and we ran this fun drop, the third of the lower "big three". It has a nasty slot on the right and the hole above it pushes you right, so stay on your toes.  Jon going for it in this video.


Josh after the boof, my bad timing on the shot. 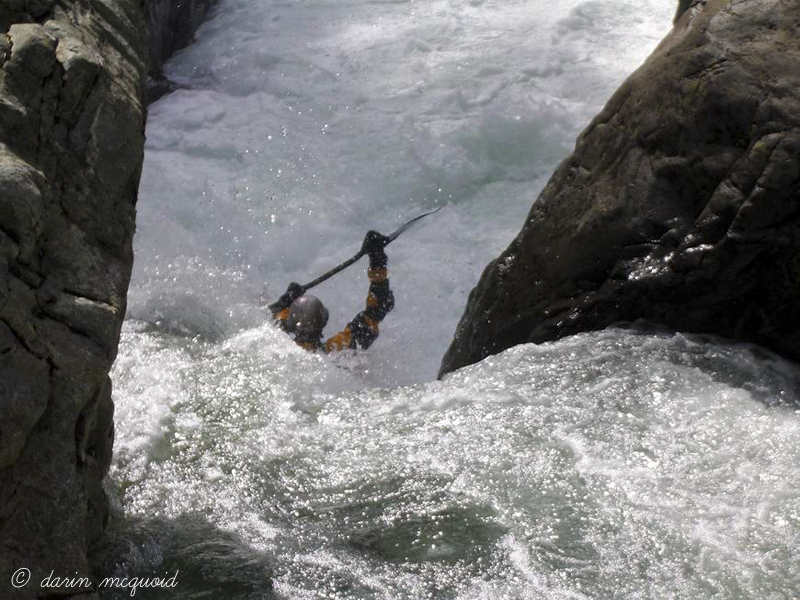 A few rapids below this one lies Post Creek, where a fifteen minute hike can have you at a logging road and a much shorter shuttle. The log across the river also marks the end of what we call the "Boof Section" and is the start of the "Oregon Section, where for about a mile and a half the river gets a little bit chunky and has more wood. 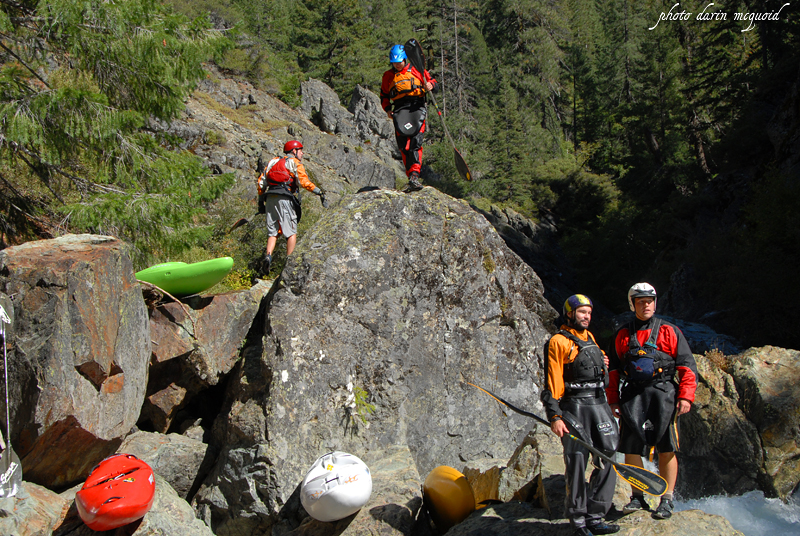 A chunky rapid immediately below the portage. 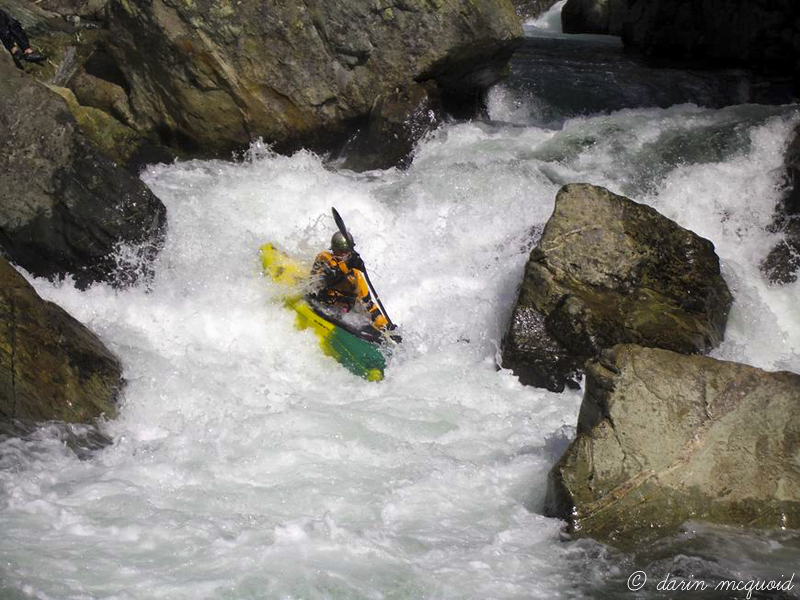 Within half a mile of the portage is one of the more dangerous rapids on the run, a class II lead in that S-Turns into class III, then IV with a big sieve on the right. We found a beauty of a line goal posting two narrow rocks on the left.

Amazingly right after the sieve rapid, you enter the "California Section", three quarter miles of high quality low angle slides, ending with "The Crack" the last portage, which has been run by Taylor Cavin. Stay left on the ledge above the crack to avoid some high stress playboating.


Daniel Brasuell and Dianne Gaydos in the California Section. 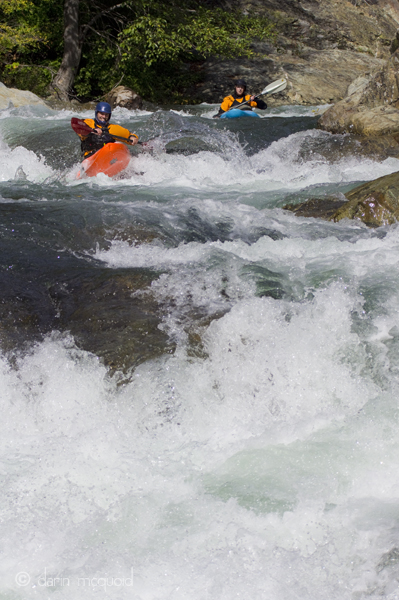 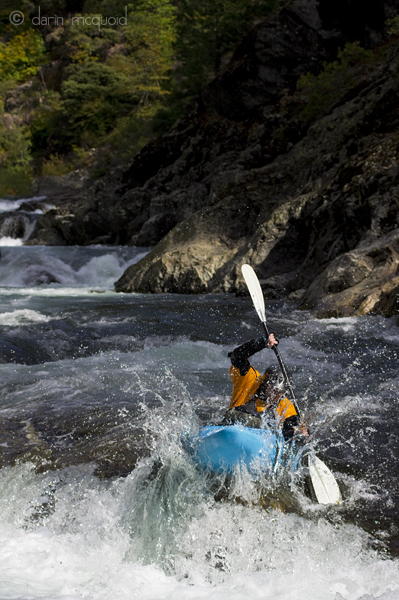 This run is really all about fun 3-4 foot high boofs. Jason Craig enjoys one just above the final portage. 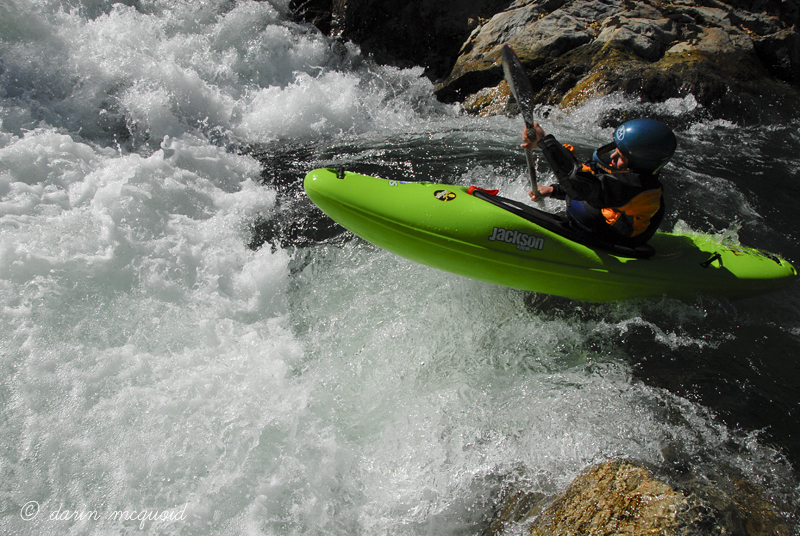 Below the crack is one more mank rapid and a few more class IV, then things suddenly mellow out into several miles of tedious II-III that has gorgeous scenery.


Daniel Brasuell and Dianne Gaydos soaking in some fall colors. 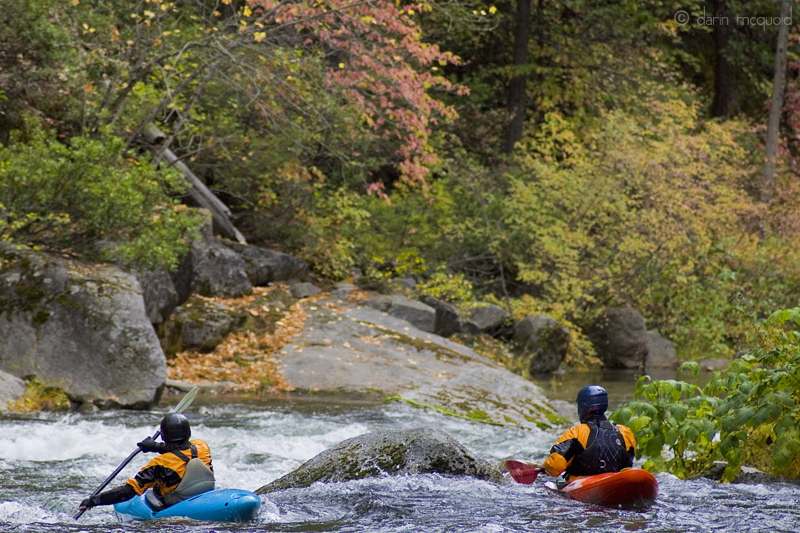 This run feels like a lot more then 8 miles. The shuttle is 45 minutes one way too, so it makes for a long day. If you haven't done it go with someone that knows it for a fun day. If you are confident you can lead yourself down for an adventure.

The shuttle. There don't seem to be any quality directions for the shuttle, or for that matter finding the take-out. Here is what worked best for us, we approached from the north. Heading south on 70 take a left on 162, and follow it. It makes a tricky bend at a stoplight in Oroville that is easy to miss. Follow 162 until a right turn at FORBESTOWN RD. After a few miles make a left on LUMPKIN RD aka 27. Follow this road for a ways and it eventually makes a funky "Y" stay right at this Y, the road changes from paved two-lane to a paved one lane (but decently wide) road. Follow this road for a short ways until a right turn on road 24 (several bullet holes in sign, dirt road). Follow this road down past the SF Feather at Golden Trout Crossing (good free camping, can't take out here because diversion dam is upstream). Keep going past the SF Feather until you hit road "33" (very small signs for 33, it's dirt as well) when in doubt stay left on the well traveled dirt road until you see a sign that says "South Fork Diversion Dam" on your left, follow this road (left turn off 33) down to the diversion dam. Good camping here at your take-out as well. The put-in: Turn your car around and drive back to right hand turn on 33. Now when in doubt stay right and cross back over on road 24/Golden Trout Crossing. Drive all the way back to road 27 (paved) and make a right hand turn. Stay on the paved road for quite a ways, stay right when the paved road forks, and stay right on this road (but don't turn onto any dirt roads). Within about 30 minutes on this road (from turning onto it off of 24) you should be at the put-in, Little Grass Valley Res. There is a trail to the left of the small outhouse shaped building, follow it to the bottom of the spillway. I found the left side of the rocks below the spillway to be fairly easy.


Hiking out at Post Creek a an option that shortens the total shuttle time by an hour, and gets you most of the good rapids in the run, and with no paddle out. Celebrate! (Due to logging in the area this road is now gated and not agood option) 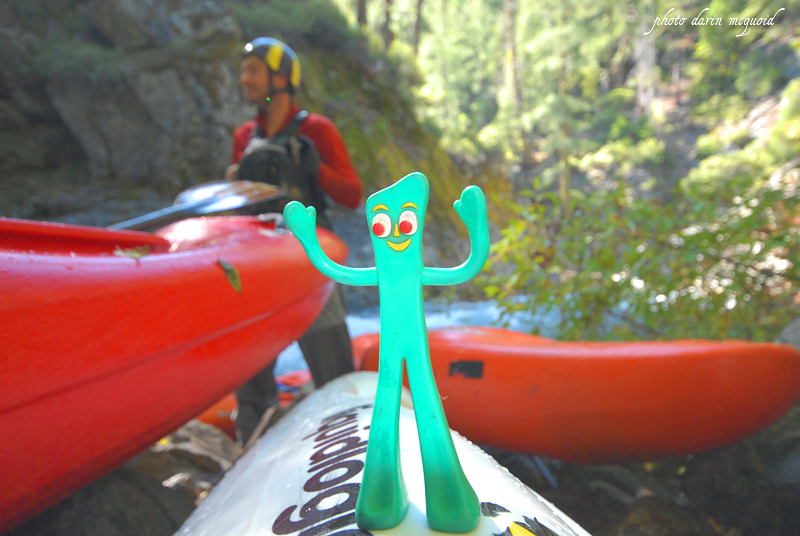 A video of the South Fork Feather River