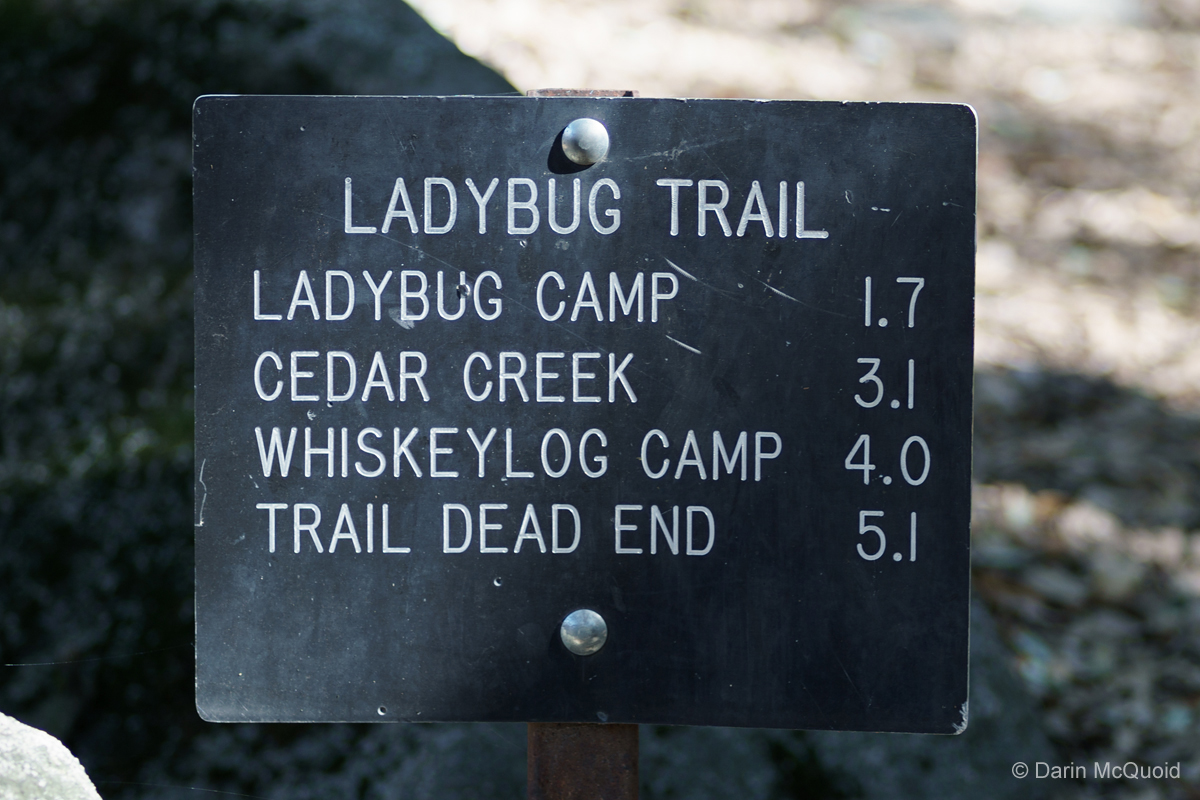 Living in Three Rivers we hike in the South Fork Kaweah on a regular basis, it's a great place to get away from the park crowds. After my first time up the Garfield Grove trail to Hockett Meadow I was curious about the river canyon below Hockett. Maps showed steep consistent gradient, while Google Earth showed more of a gorge. As scrambling is easier going up than down, it made sense to approach from the Ladybug trail. After some google searching I was more inspired by this thread on HighSierraTopix.

Finally this fall I had some free time and packed for two nights, planning to head up the Ladybug Trail, stay on river right (looking downstream) and follow the river up to the Garfield Grove trail crossing. I'd been to trails end before and like others in the thread, noticed some sort of trail did keep going.


Homer's Nose as seen from the hike up, still on the to do list. Many dead trees from the drought. 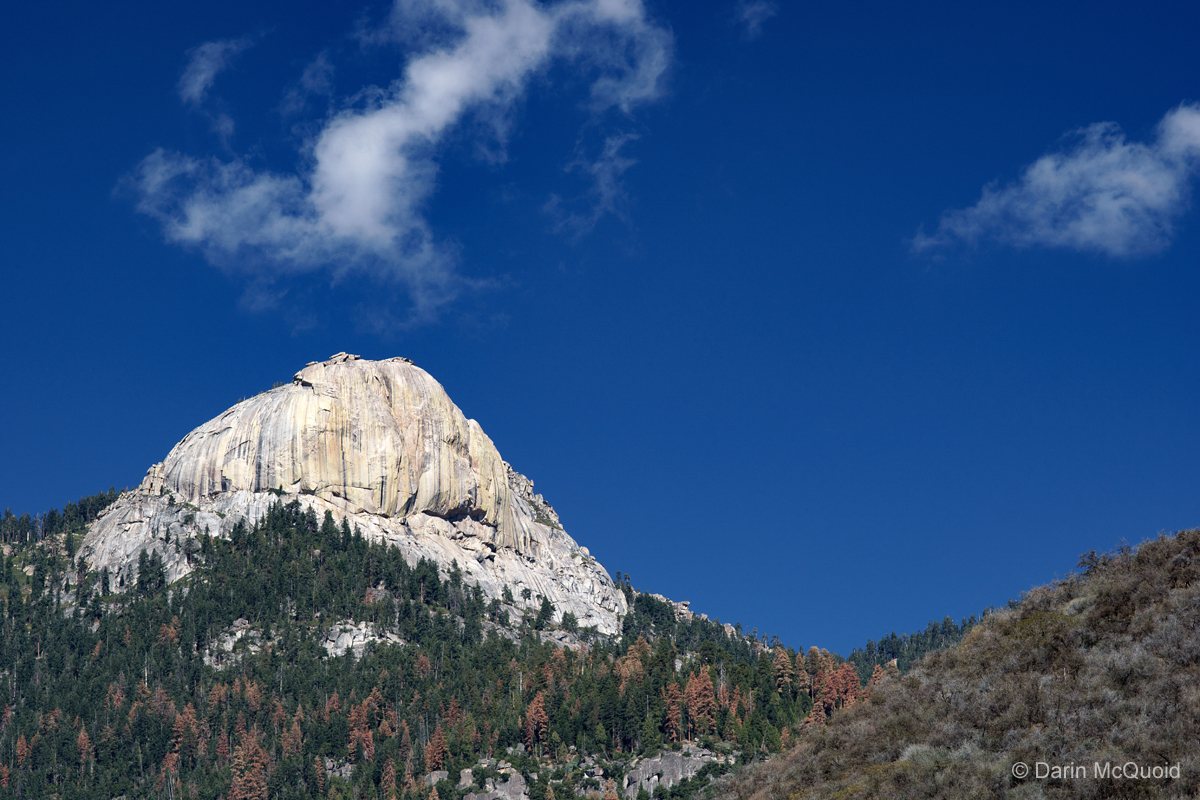 The trail is well marked for the first several miles. Despite what SEKI maps indicate, the trail is actually fairly well maintained past Cedar Flat until Trails End. New work was done on it this year. 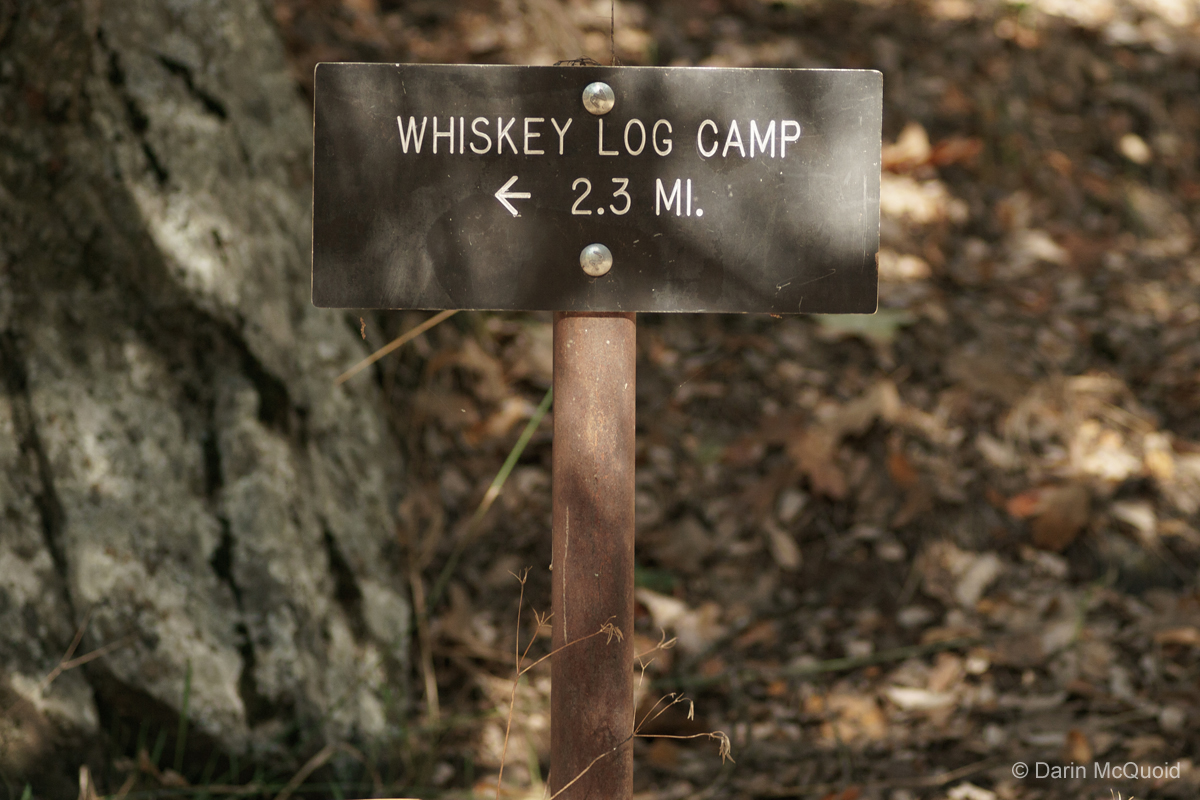 I tried the trail to Cahoon Meadow earlier in the year. Serious bushwhacking, I turned around when it vanished in a manzinata patch. It was easy to follow until then but I was stupid enough to be wearing shorts, not the right apparel for these adventures. 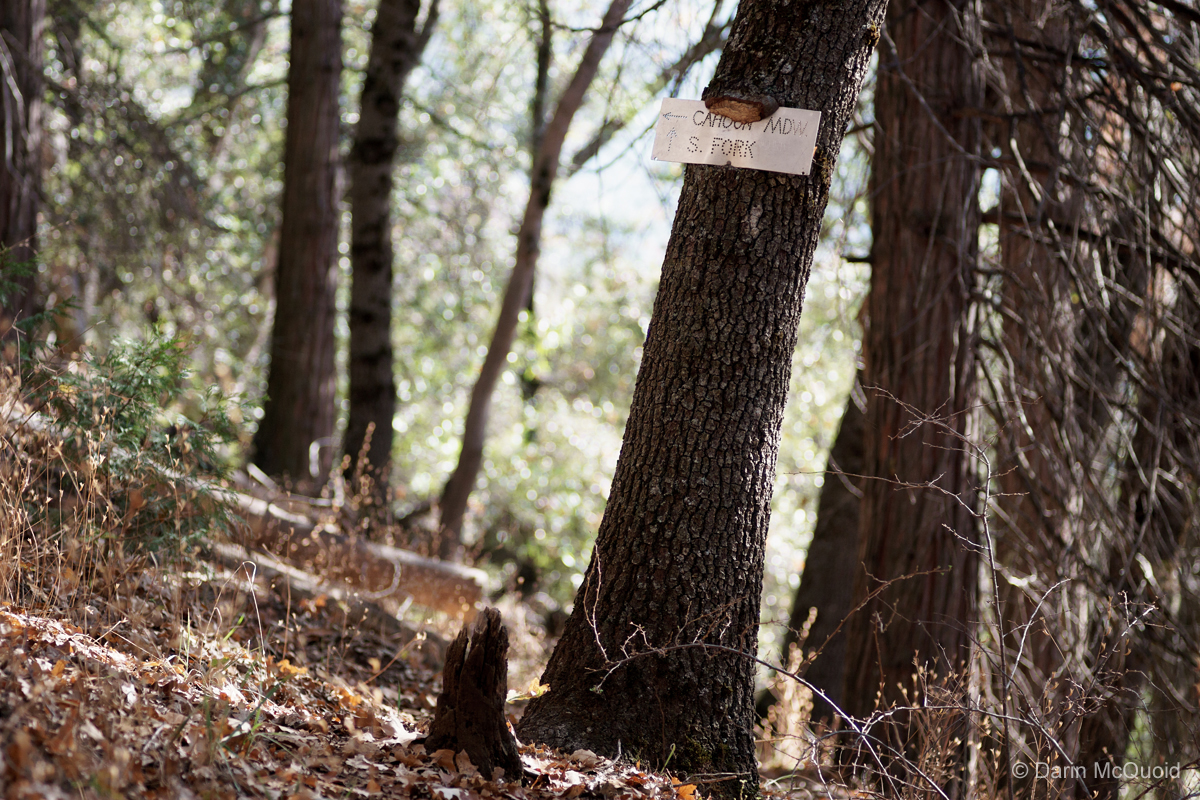 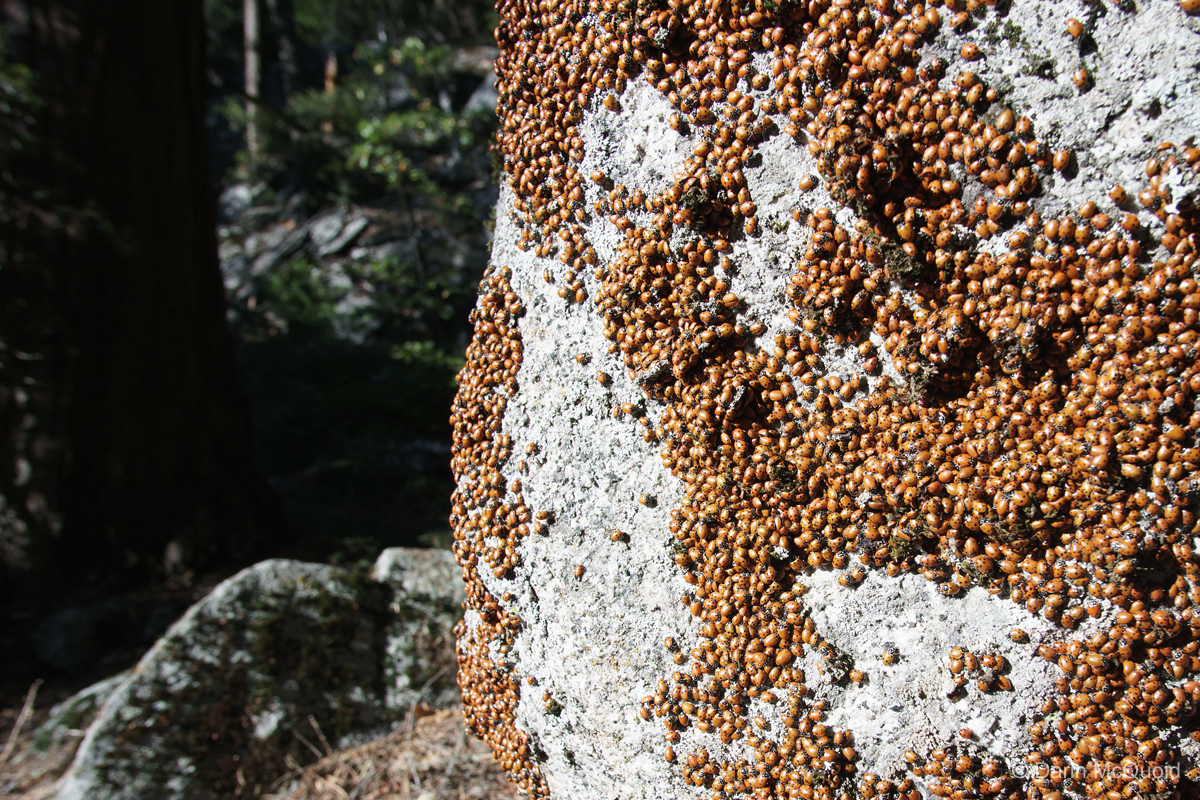 It was tempting to camp here as I had not gotten an early start, but there were still a few hours of sunlight left and the camp was swamped by ladybugs. 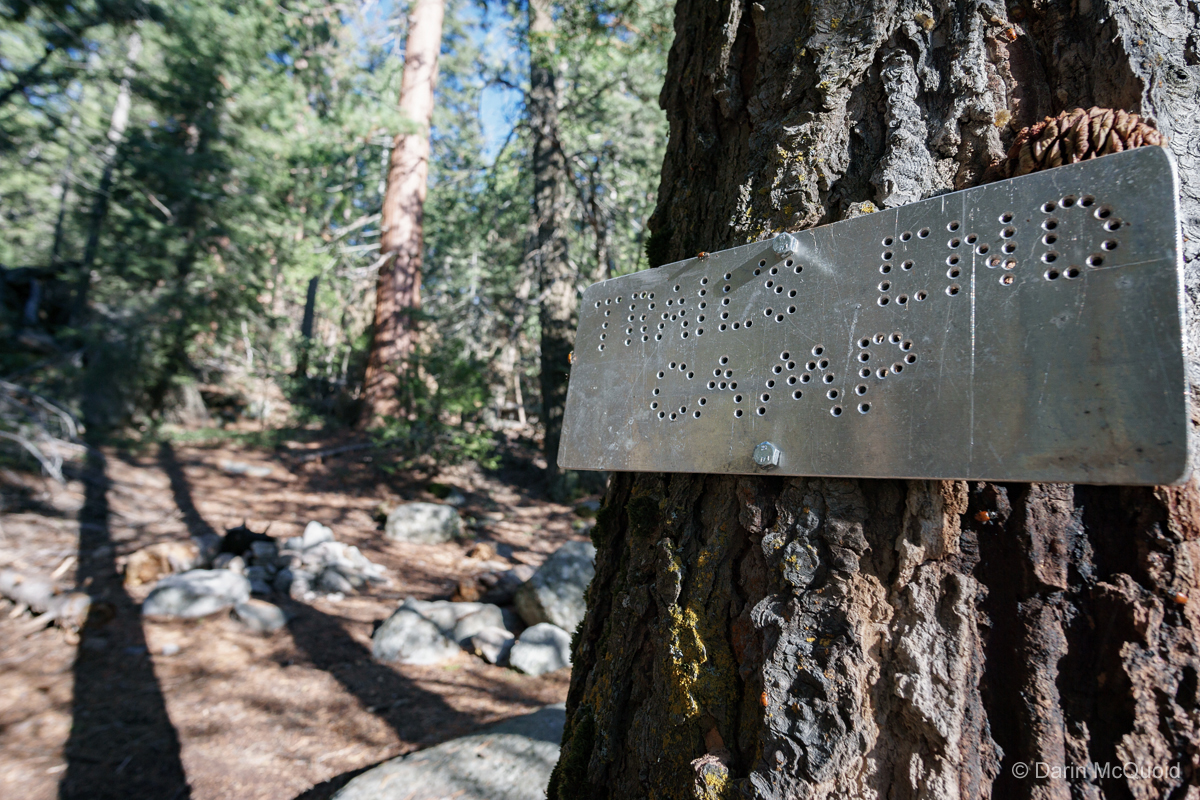 The trail would vanish for long sections then suddenly reappear. 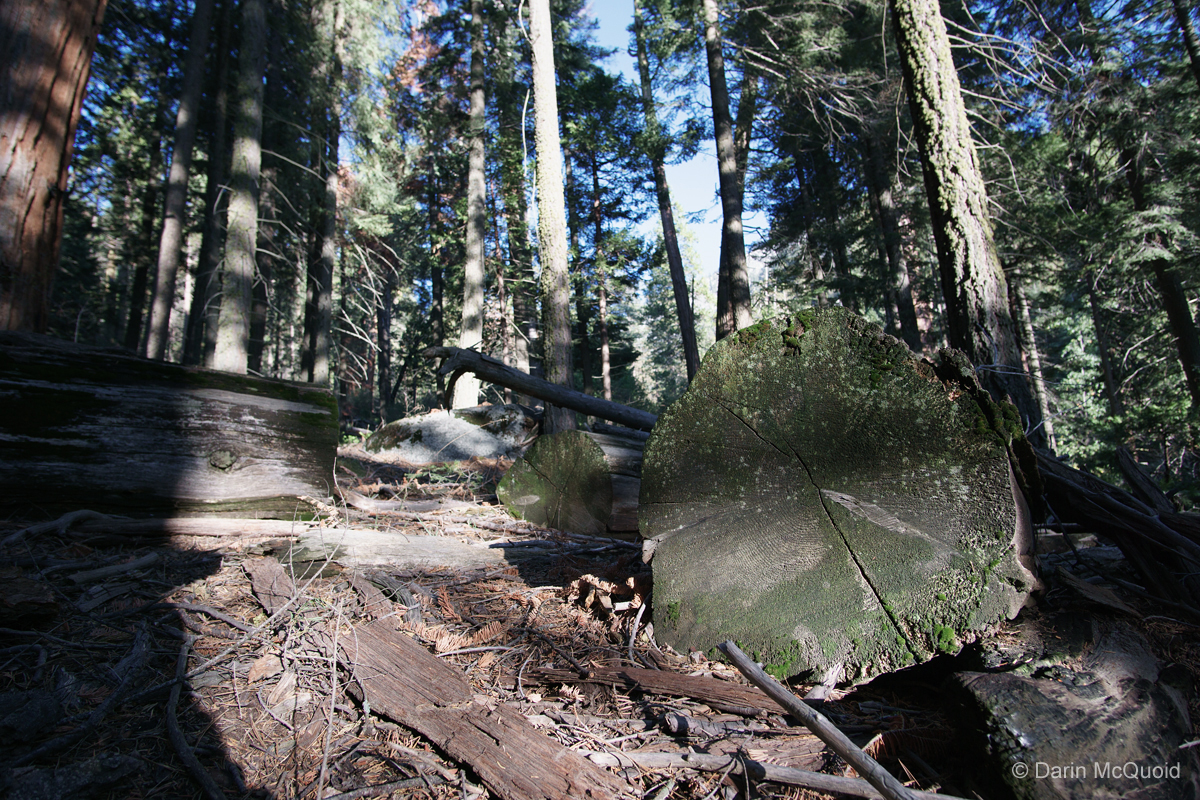 Maybe a mile past Trails End this could make a nice emergency camp. Down by the river is a nice campsite with fire ring. 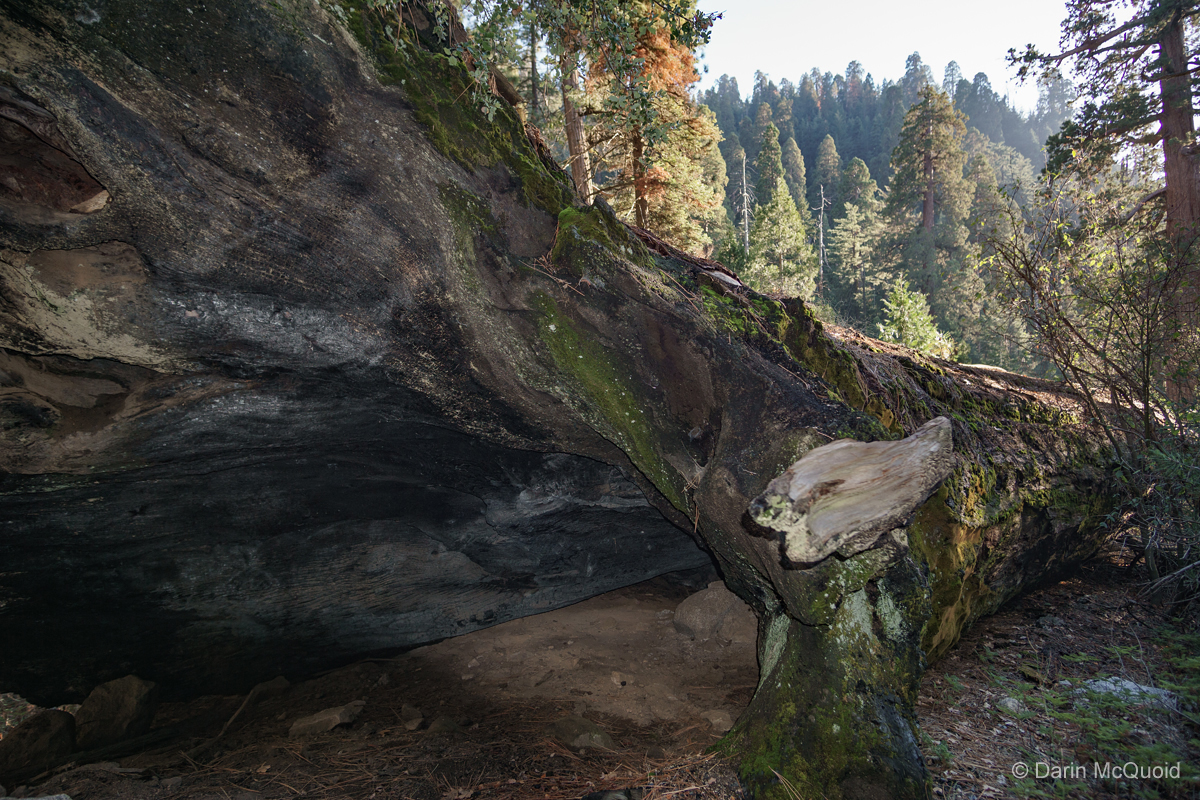 Shortly after leaving the downed Sequoia the river was in a steep canyon that I'd almost call a gorge. Trying to get down to water would be no easy task, so I was surprised to find this campsite that had been used over the summer. 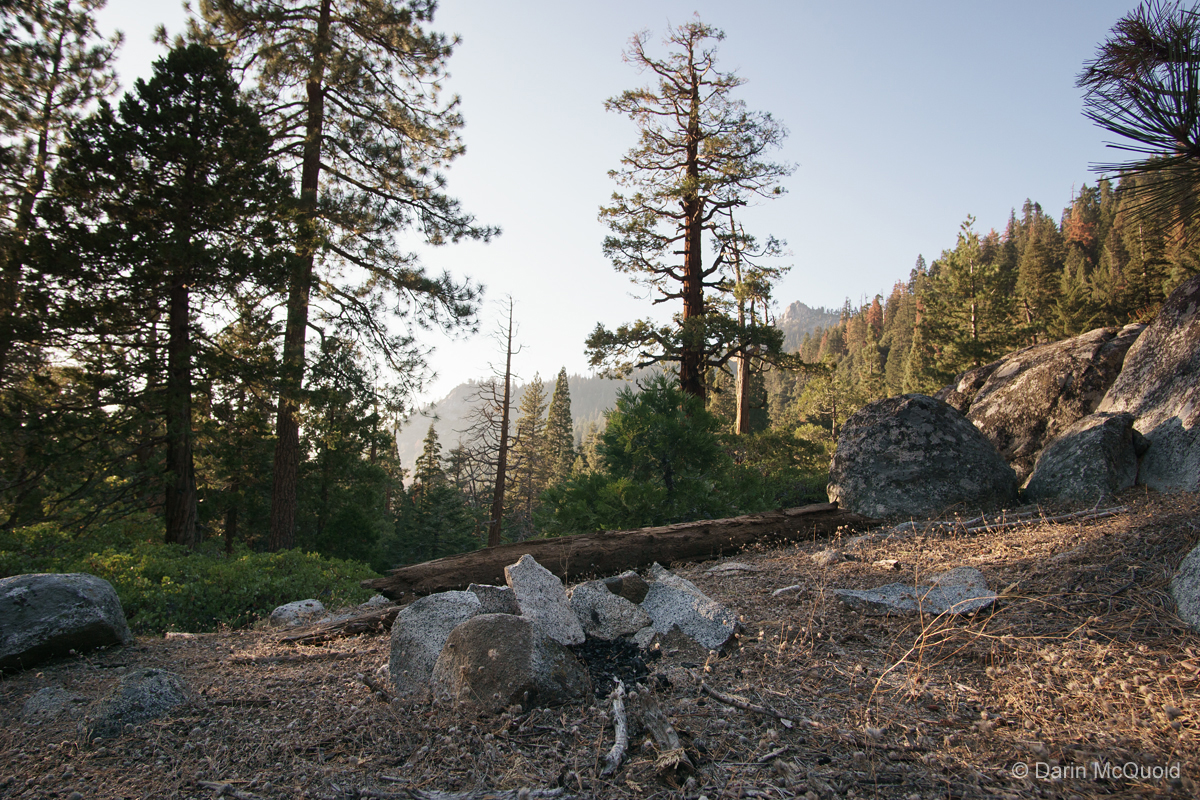 Here I came upon another campsite that had not been used in years. Perhaps in non-drought years there would be access to water, but no such luck. I just ran out and would have loved to setup camp. Instead it was either turn back or forge ahead and hope to find water and a flat spot. In the below photo I hoped to climb a little and traverse to river level, hoping for a flat spot before the South Kaweah makes that right turn and hits a headwall. 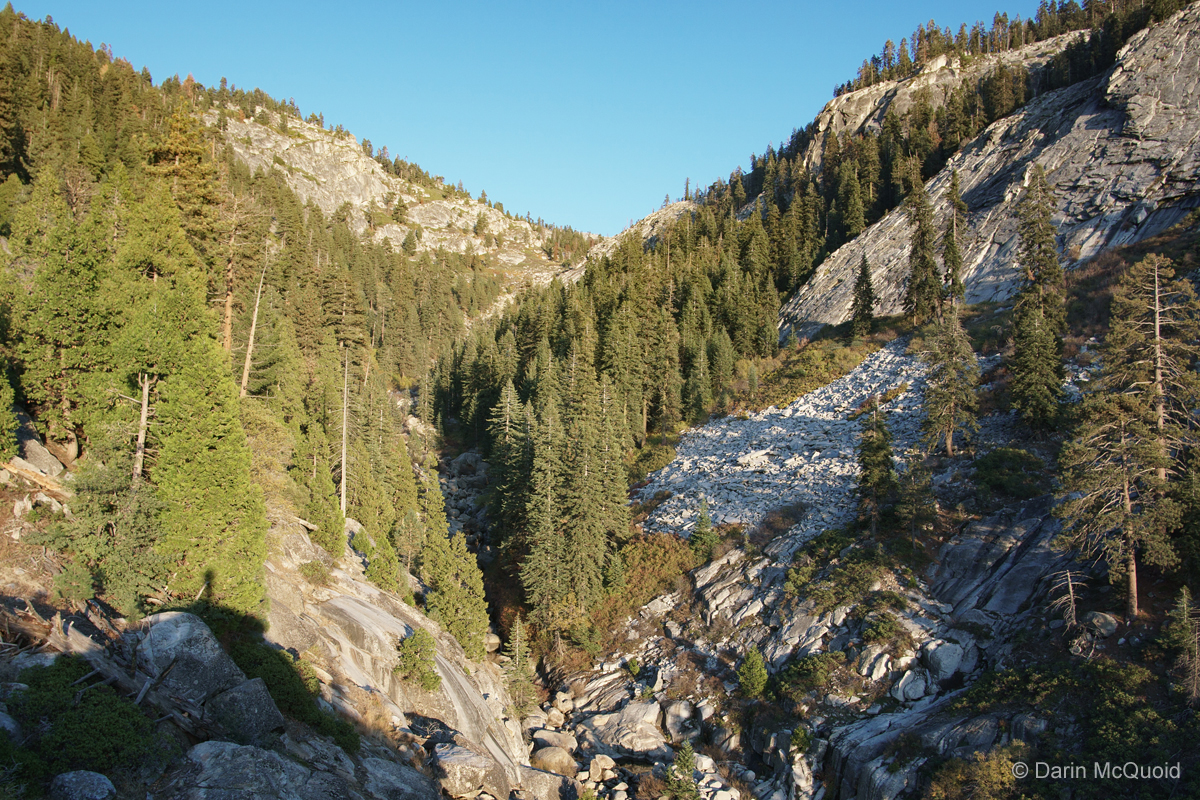 It sure gets steep up here! To this point there has been no bad bushwhacking or too steep of scrambling. 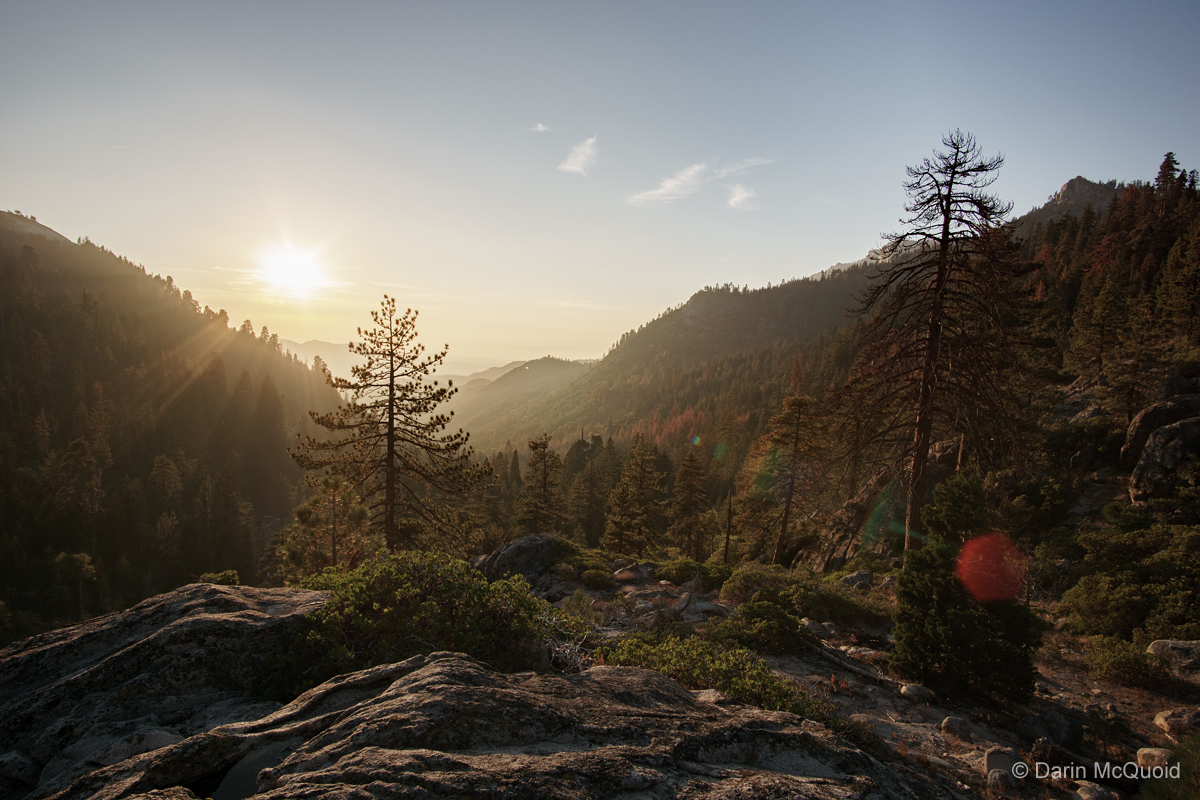 Sunset on another dead tree. 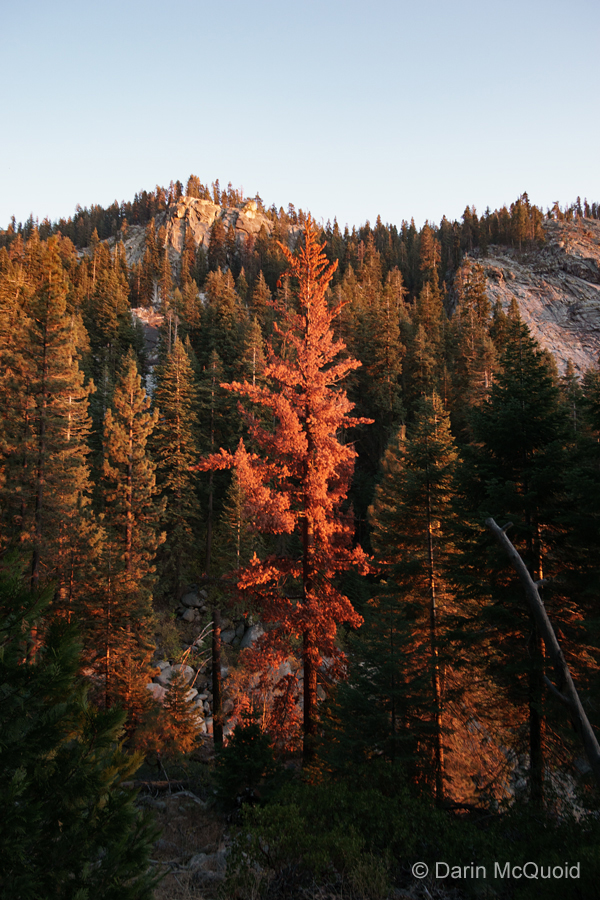 The traverse is actually rather terrible bushwhacking and scrambling. Not fun stuff. I get lucky and find a flat spot next to water and call it a night, exhausted. 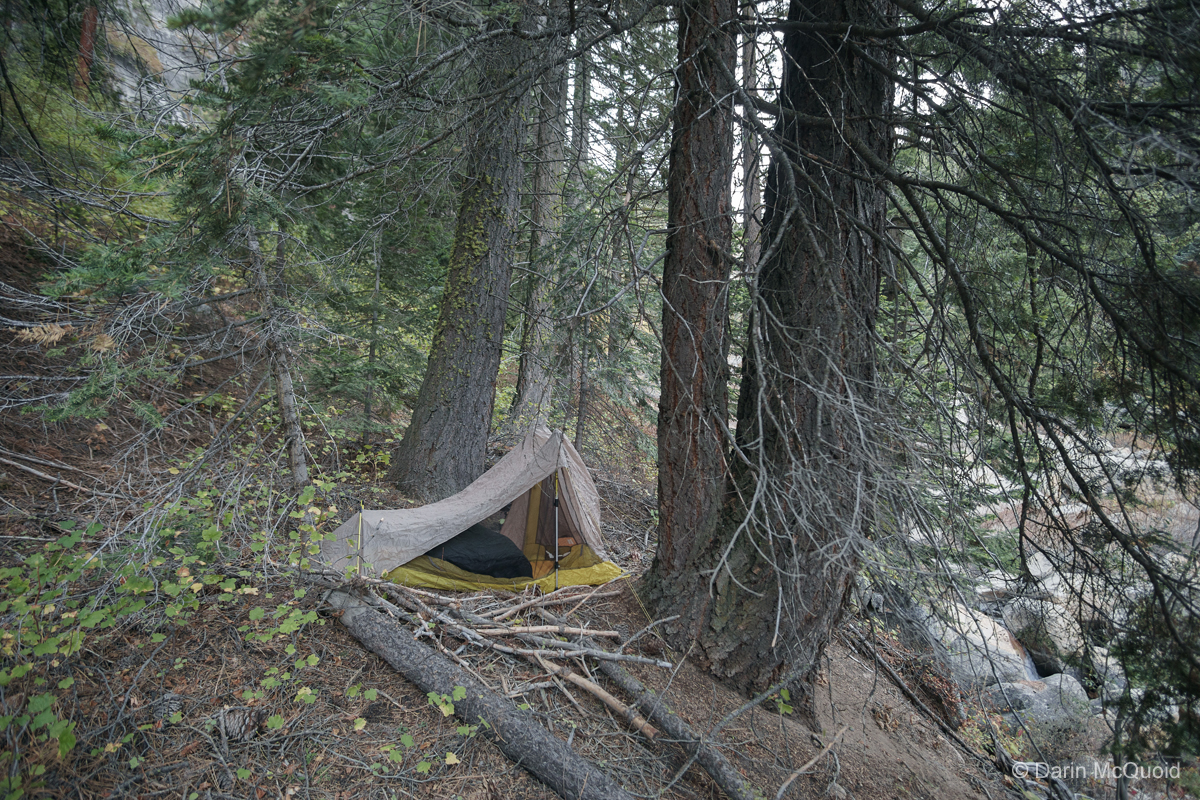 It's a tough year for bears, this guy was very curious about my breakfast and I can't blame him, he looks malnourished and not ready for the winter. 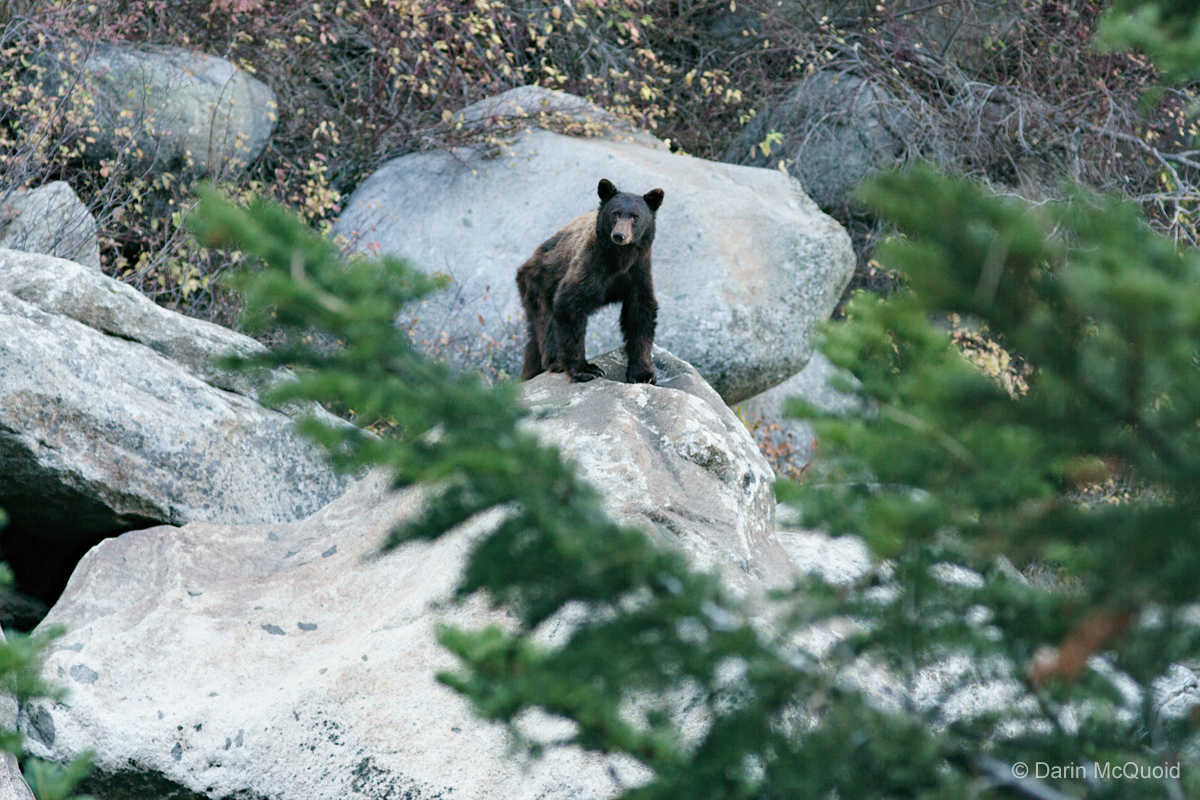 Thankfully he wasn't too curious and after making some noise he turned around and ambled up the south side of the river. Upstream the river flows through a gorge and hits a headwall of very steep gradient. Brush on the sides of the river and cliff bands would make passage quite difficult. I decided that alone the riverbed would be too much risk. From camp at 7,000' I climbed up about 1,000' through lots of brush and steep scrambling to a saddle still 1,200' below Cahoon Rock. Here is the route as tracked by my GPS. 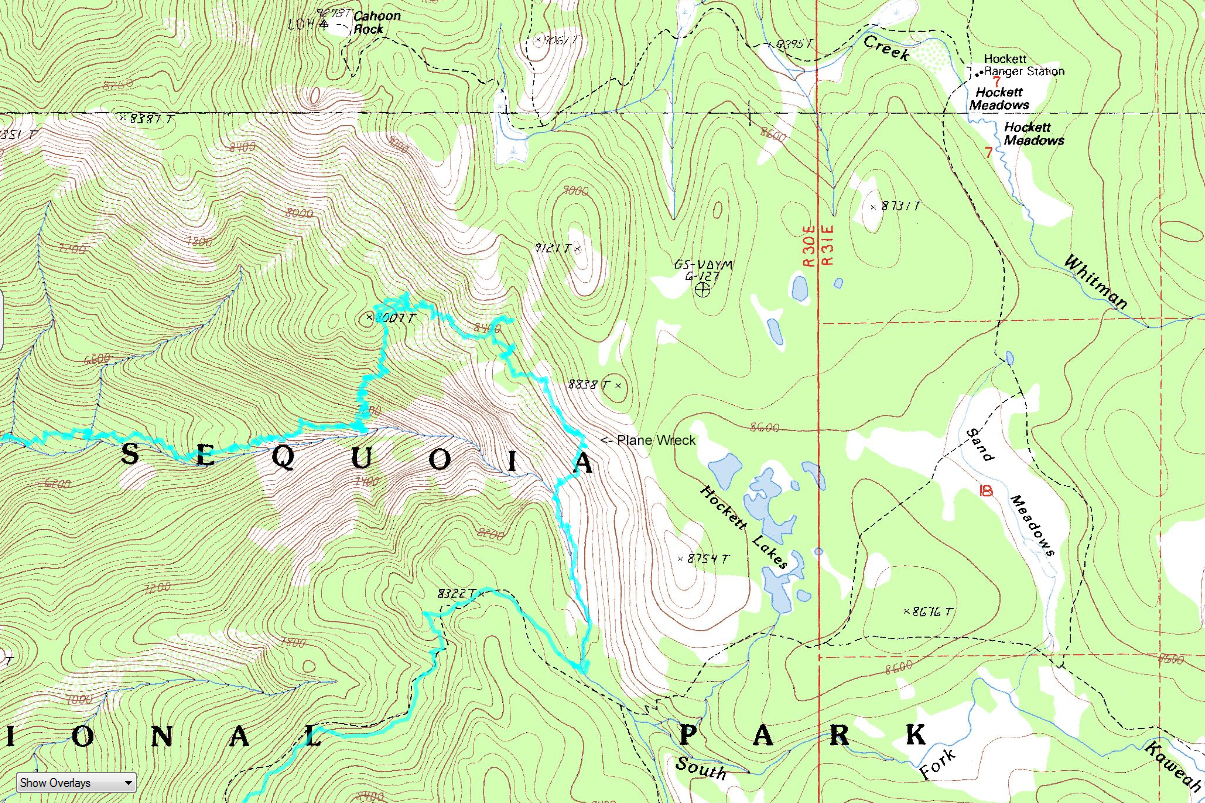 First view of the river as I neared a saddle by Hockett Lakes. 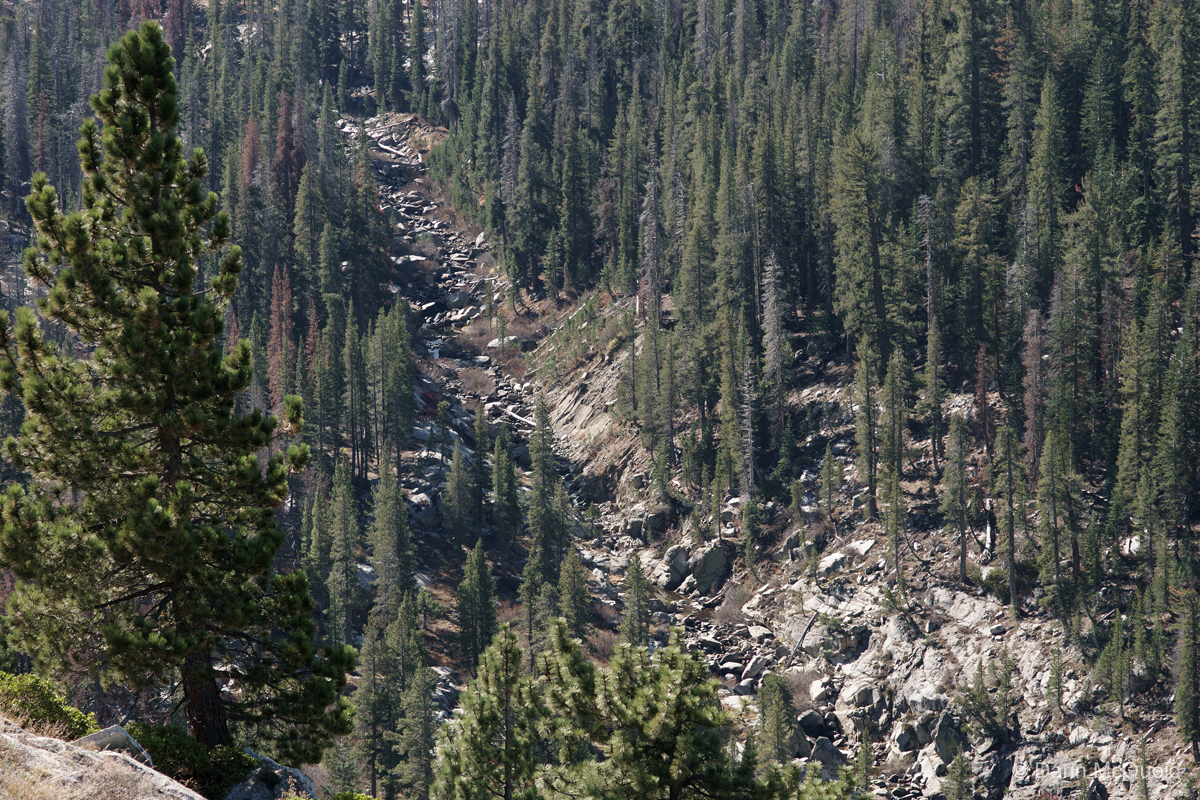 Looking back down the South Kaweah you can see where the gorge and headwall make passing at river level a dubious affair. 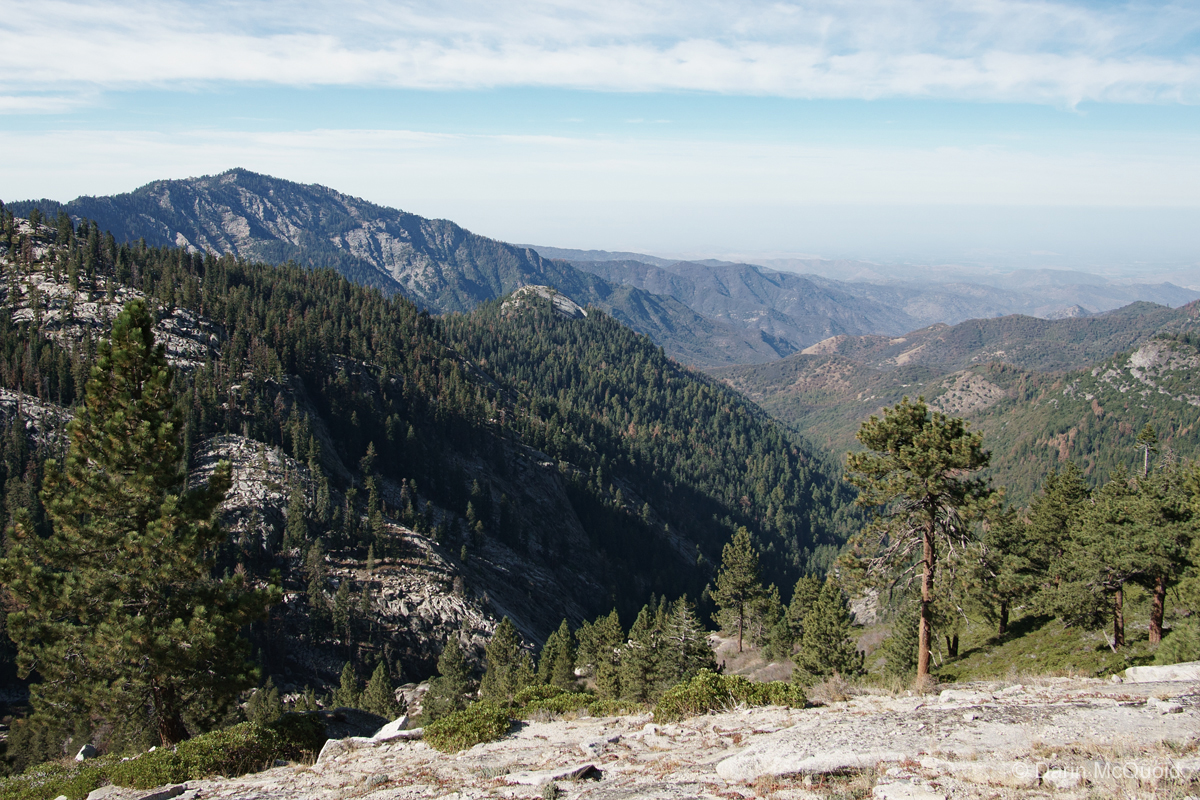 Near the saddle I was surprised to see some garbage and it took me a few minutes to figure out what it was. 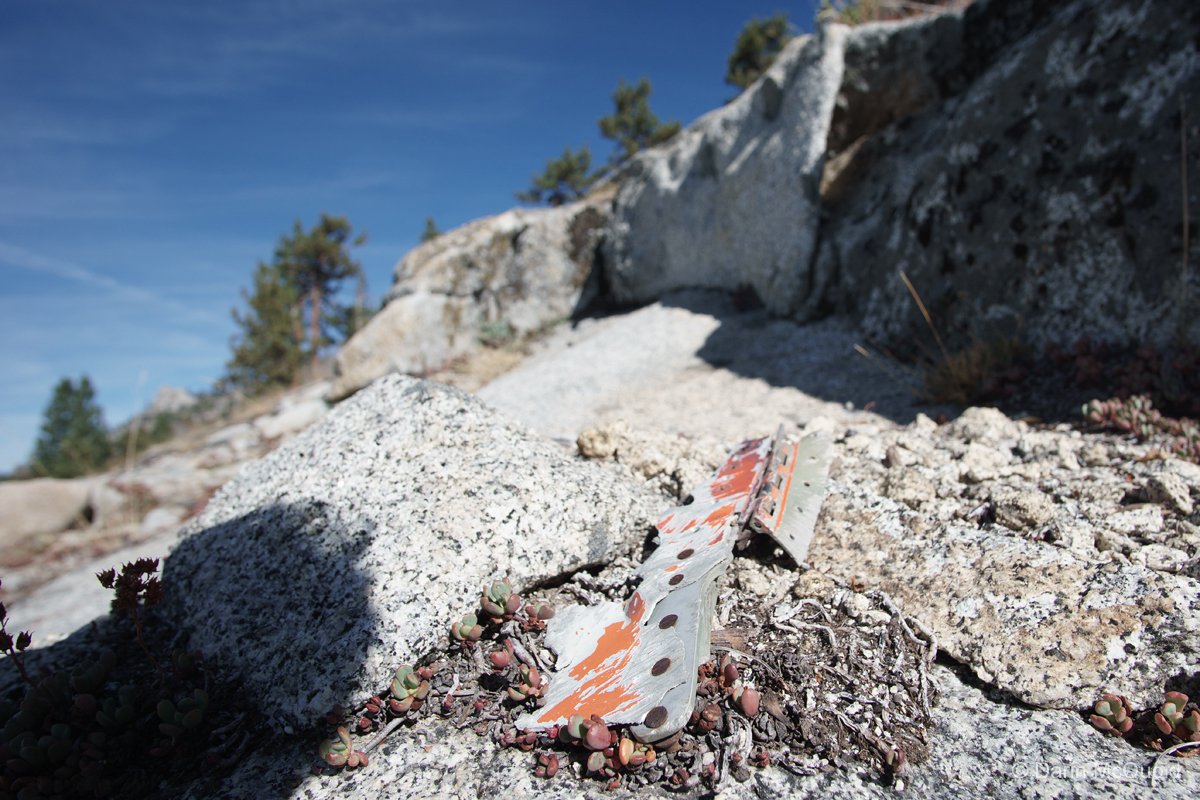 Debris from a plane crash are scattered over a large area. I'd imagine an engine is up here somewhere, but a large part of the area is a chest deep manzanita field and I wasn't that curious. 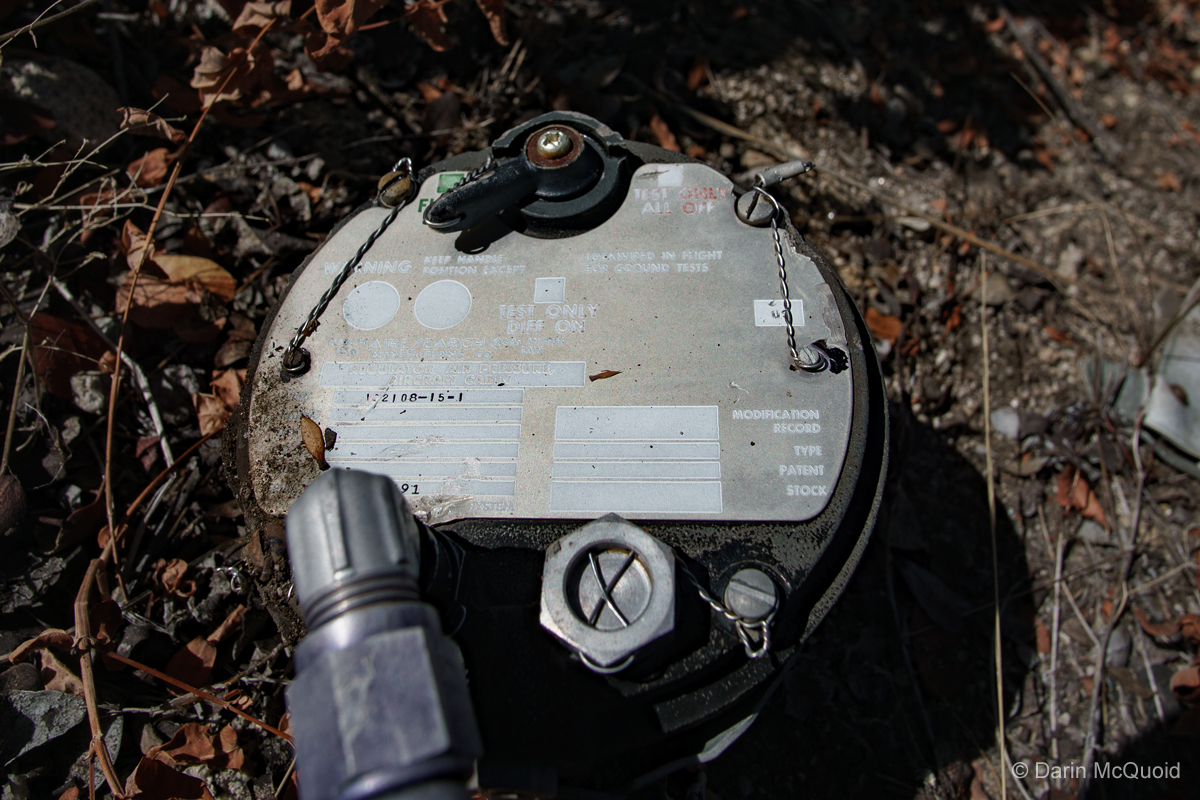 I took a break and debated my options. Over the saddle to Hockett lakes and the trail, or cross country up the South Kaweah to the trail crossing? I decided going to the South Kaweah both avoided more brush and stuck to the original plan. Less than a hour later it was lunch at the Garfield Grove trail crossing and a long painful downhill slog back to the trailhead. I can't say this loop is something I'd do again, but it certainly was entertaining with only a few miles of bad bushwhacking.