Flowing out of Kings Canyon National Park, the South Fork of the Kings River is roadside for 15 miles before carving its way into Horseshoe Bend. Geologically it's one of the most interesting rivers in California. After the incredibly steep headwaters the river meanders through meadows in a classic glacial U shaped valley with granite walls in the National Park. A band of marble passes north to south through Sequoia and Kings Canyon National Park with over 190 caves, some of the most notable being; Palmer Cave on the South Fork Kaweah, Crystal Cave on the North Fork Kaweah and Boyden Cave on the South Fork Kings. As the river passes Boyden Cave the character changes. It flows through a tight inner gorge, and one of the deepest canyons in North America with Spanish Mountain rising 8,200' out of the right side of the river as the river makes a horseshoe bend.

Horseshoe Bend. Fear and Loathing. This section of river has lived under both names. The origin of the first is obvious. Fear and Loathing in Las Vegas: A Savage Journey to the Heart of the American Dream is a novel written in 1971 by Hunter S. Thompson. In 1998 it was made into a film with Johnny Depp and Benicio Del Toro. When first run, one rapid in the Horseshoe Bend of the South Fork Kings inspired both fear and loathing. It can't be scouted or portaged, and bordered on unrunable. Very few ventured in to run this section, even though putting in below the Fear and Loathing rapid is possible by utilizing a poison oak infested fisherman's trail at Convict Flat Campground. It was also typically run from 1,000-3,000cfs at the Rodgers Crossing Gauge.

Never a popular run, it didn't see a modern media capturing descent until 2012, at a more manageable flow of 900cfs at Rodgers Crossing. The team came out with word that Fear and Loathing was no more, the rapid had changed and was no big deal. That in combination with modern creek boats and lower flows the run was quite enjoyable. They proclaimed it to be one of the best two night trips in California, if not the best. That's a bold statement, and the run was put on the must do list.

Logistics for this run are no joke. One option is to paddle the 4.5 miles down to the confluence of the South Kings and Middle Kings, then hike up almost two miles climbing over a thousand feet to Yucca Point trailhead, or continue ten miles downstream through Garlic Falls, which results in no hiking but a three hour one-way shuttle. We decide to shuttle and paddle more, meeting at Garnet Dike Campground on the Kings River at nine in the morning. From here we have two options. Stick to the paved road and head back where we came in on the long, painfully winding road around Pine Flat Reservoir to Highway 180, all in all a 95 mile three hour shuttle, or taking the "shortcut"; a dirt road trek up the final segment of Trimmer Springs Road, through Goat Saddle and eventually to Highway 180 after 25 miles of dirt road. This route should be faster and is 50 miles shorter, but that all depends on the condition of the dirt road.

Of course we're here to adventure, so we load up my little Subaru and head up the dirt road. It's a good thing it has a small lift on it, because the road is rough this year and I still struggle to get up a few steep rutted sections and bottom out a few times. Paved road is a welcome sight as we turn onto Highway 180. Flows are an estimated 1,200 at Rodger's Crossing.


The river flows from right to left. South Kings in the big canyon on the right, Middle Kings from the big canyon left of center, and the main Kings moving left after the confluence. The immensity of the scene is hard to grasp, look for the red roof of a lodge down in the trees.

One of the most scenic river access spots in the whole state; Boyden Cavern. 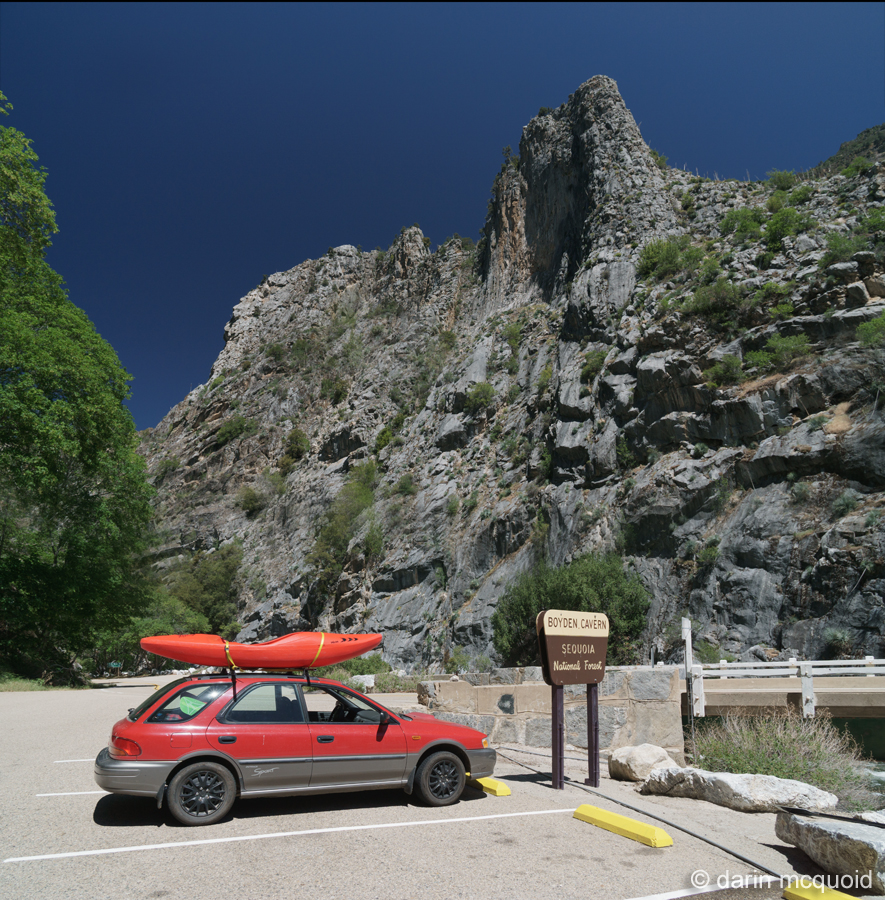 Eric Giddens under the Highway 180 bridge. We put on around one in the afternoon. Shuttle took about three hours. 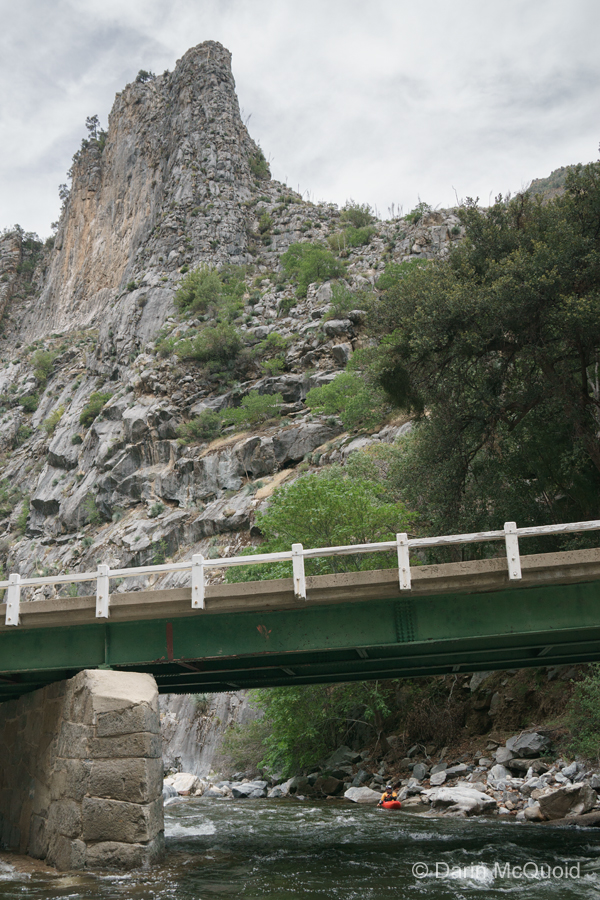 Some of the best gorge scenery in California although it looks nothing like what you'd expect for the state. 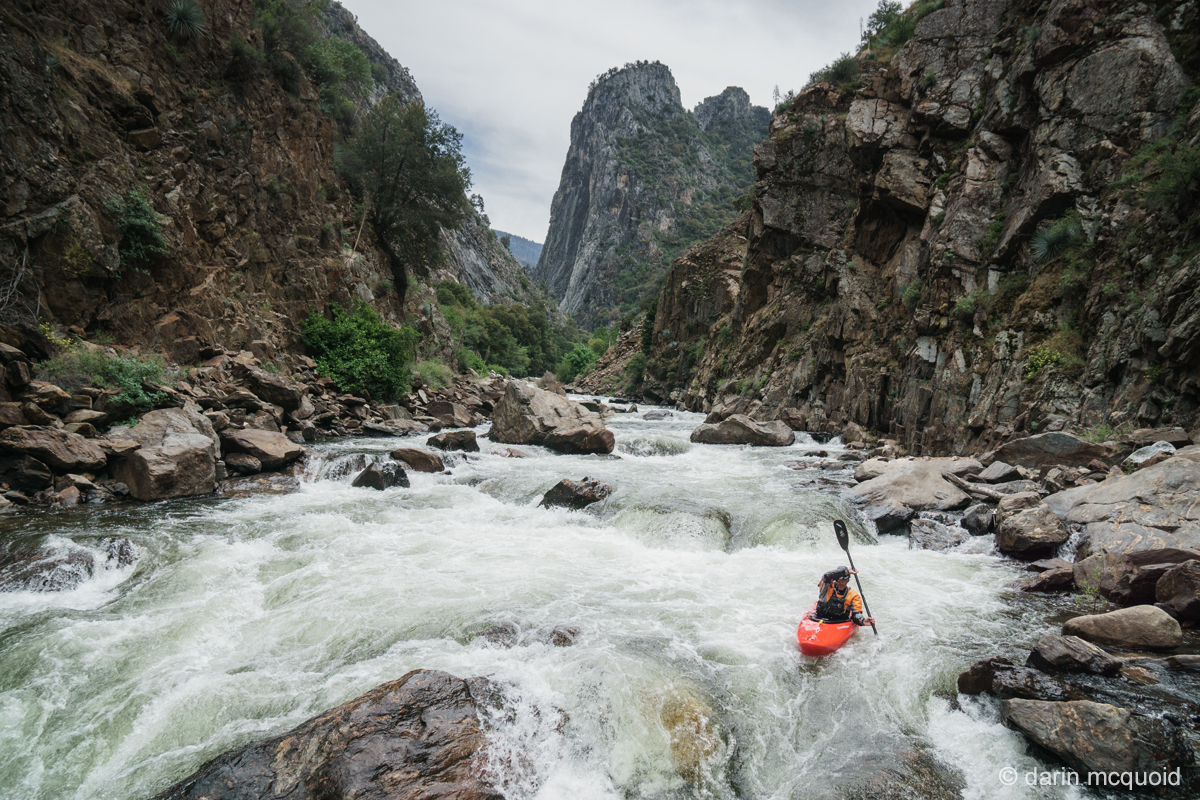 Eric Giddens boofing through our first scout of the day. Look at all that crazy rock on shore. 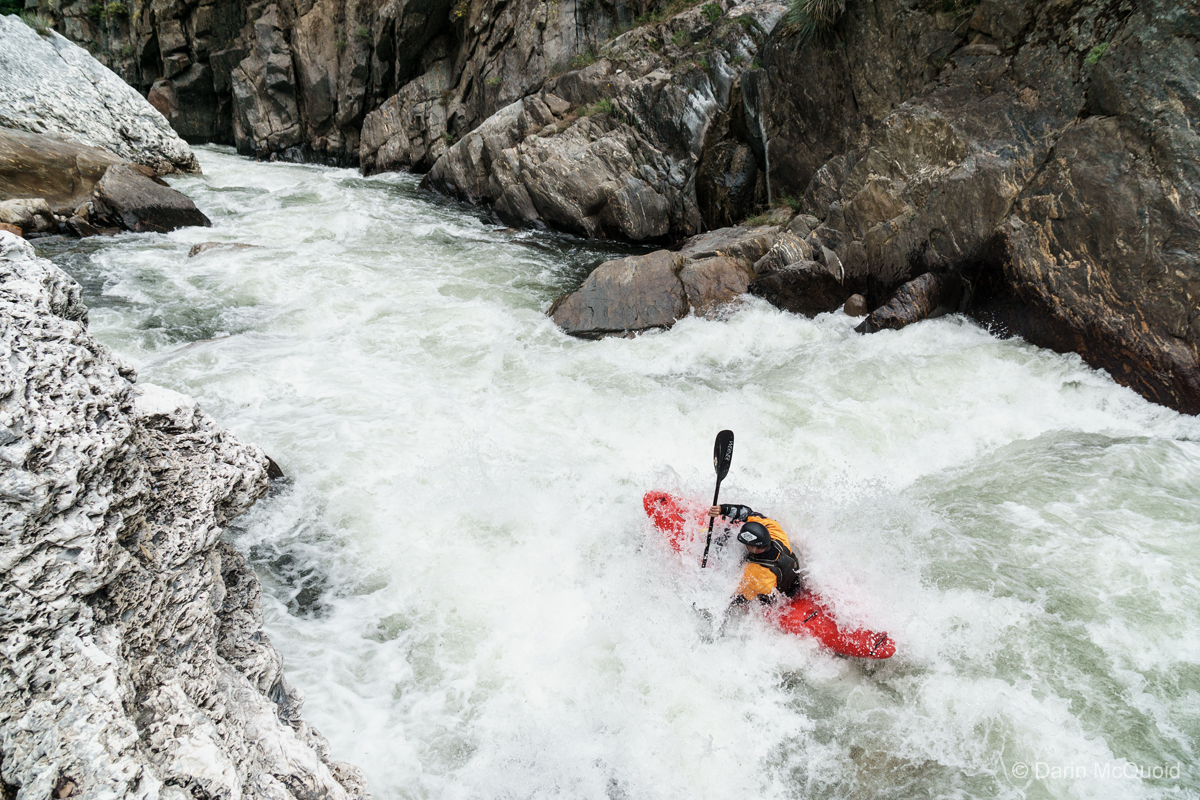 We slip into a comfortable rhythm of scouting, setting safety and running rapids. We're setting safety a lot more often than normal, but the river character requires it. Hazards are all over, and rapids would link together for a swimmer. Plus the rock is a bit chunky, which is unsurprising considering the road high above, all that blast rock was probably pushed off the cliffs.


Ian Janoska in some read and run. 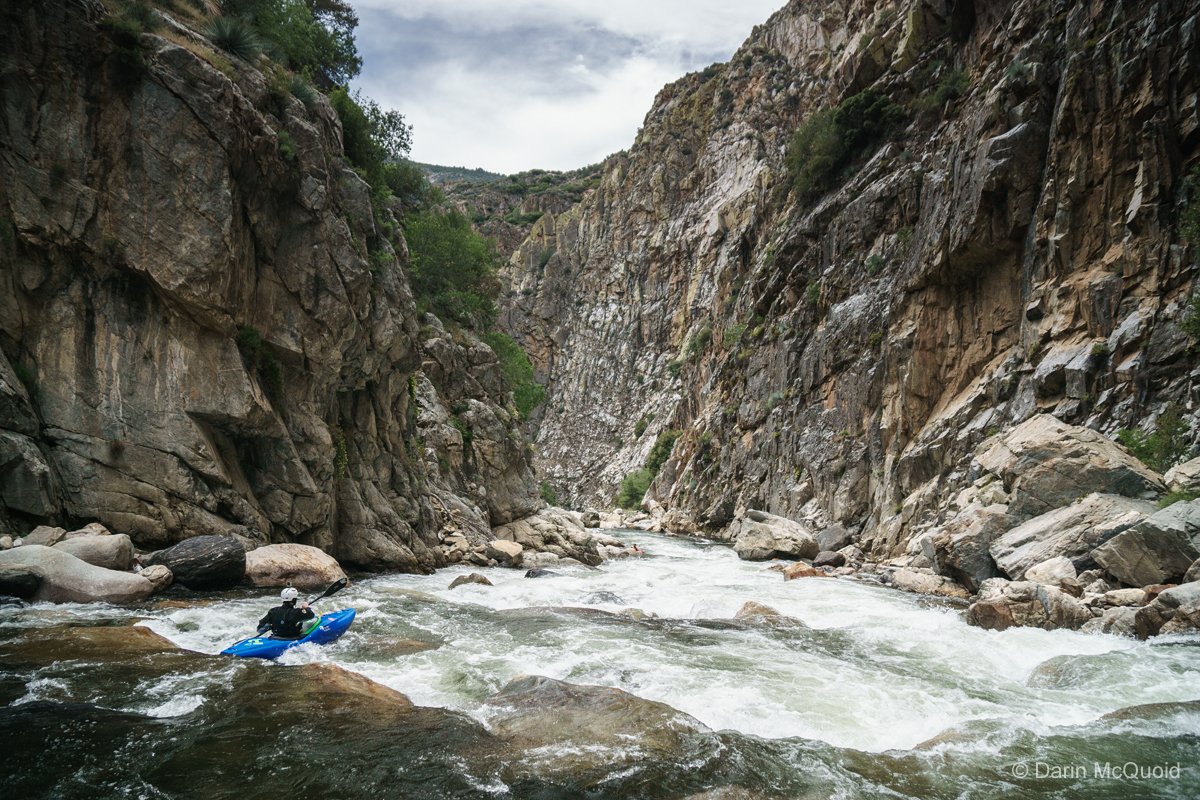 Upstream you can see the band of marble as Ian Janoska boofs a serious ledge. 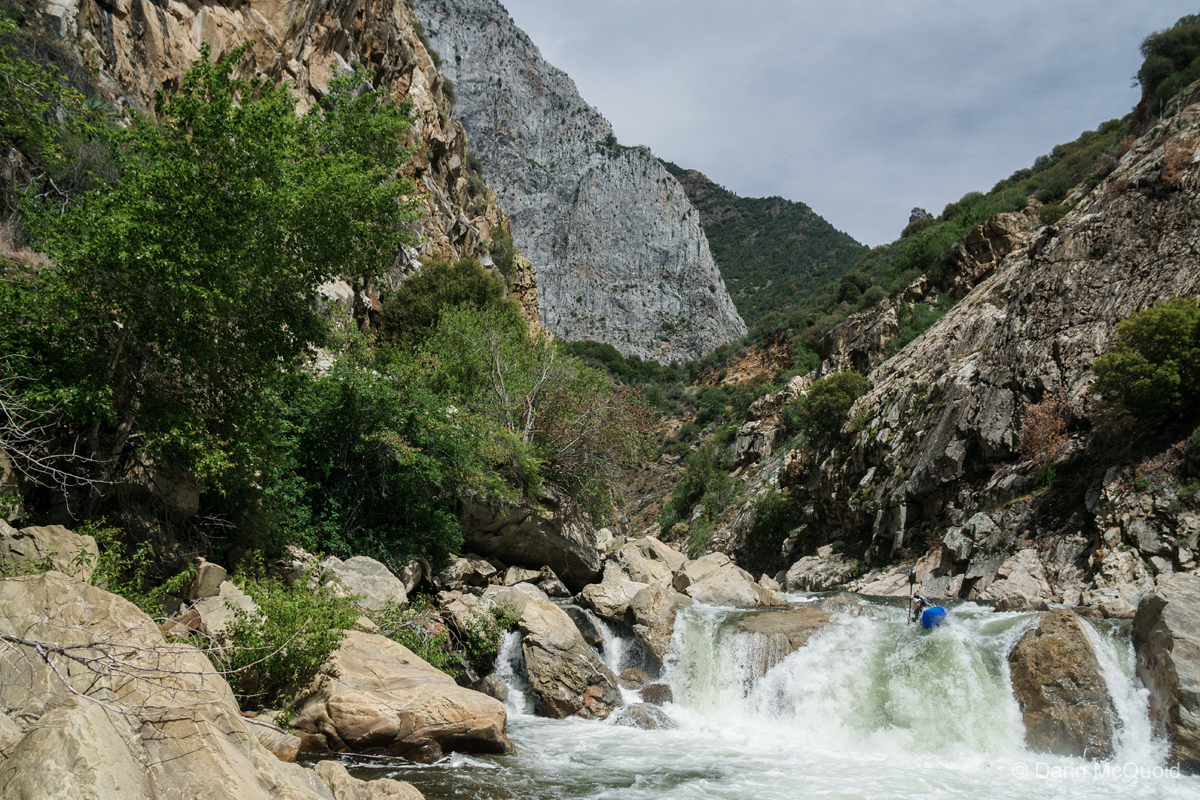 Turn around and Joseph Hatcher heads into what turned out to be everyone's favorite rapid, a very unique sliding tongue to boof affair. 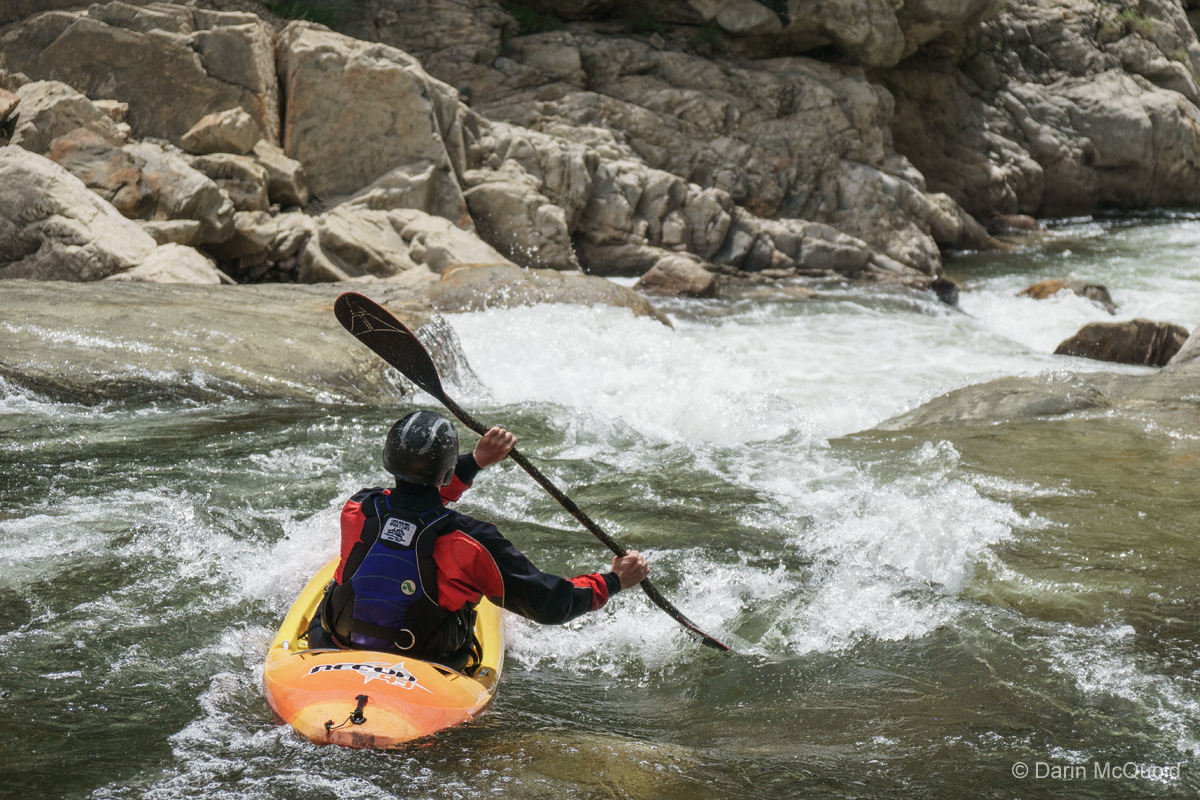 Then we head into what was Fear and Loathing. It's walled in, but we have two nice options. It's not so mellow, but it goes well for the whole group, half taking a left line in the right channel, half a left line in the right channel. Below most portage Porter Falls as the consequence of a mistake is too high. Two rapids downstream and portaging again is the popular option as the river pushes into siphons.


Ian Janoska, Joseph Hatcher and Eric Giddens in the heart of the gorge. 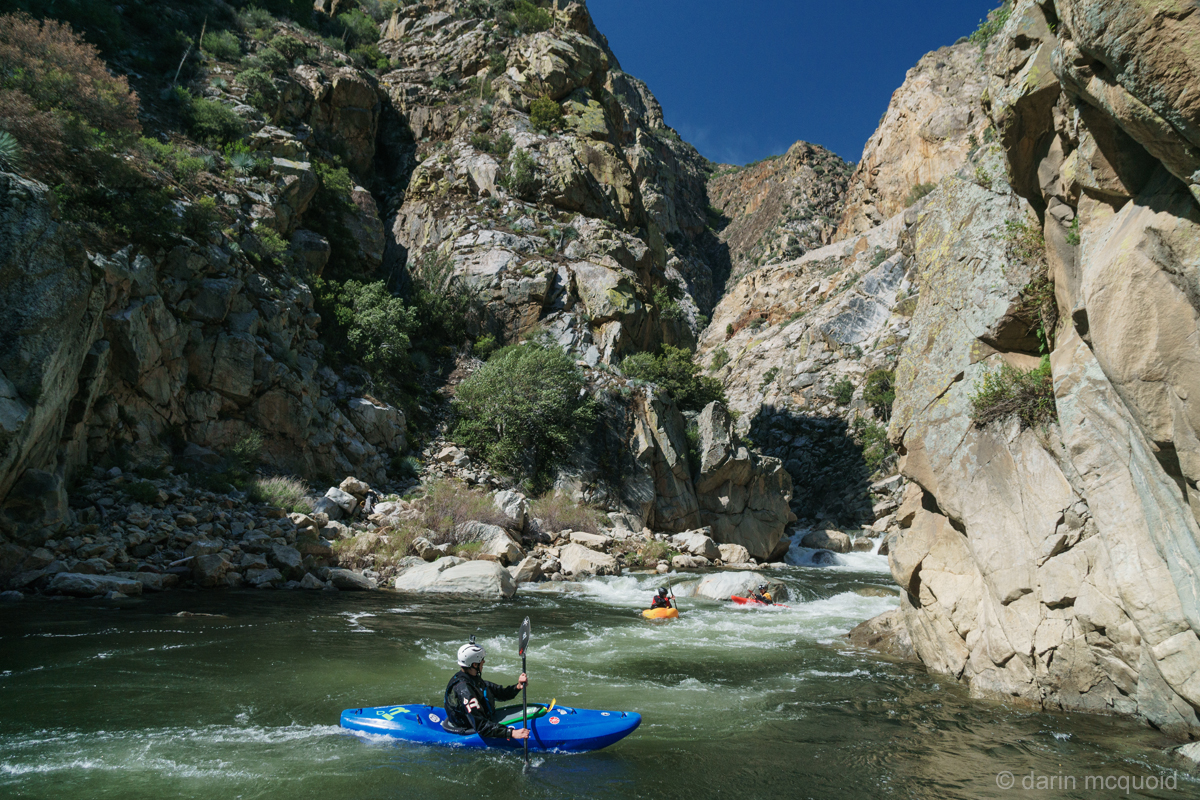 Eric Giddens on a nice read and run boulder garden. 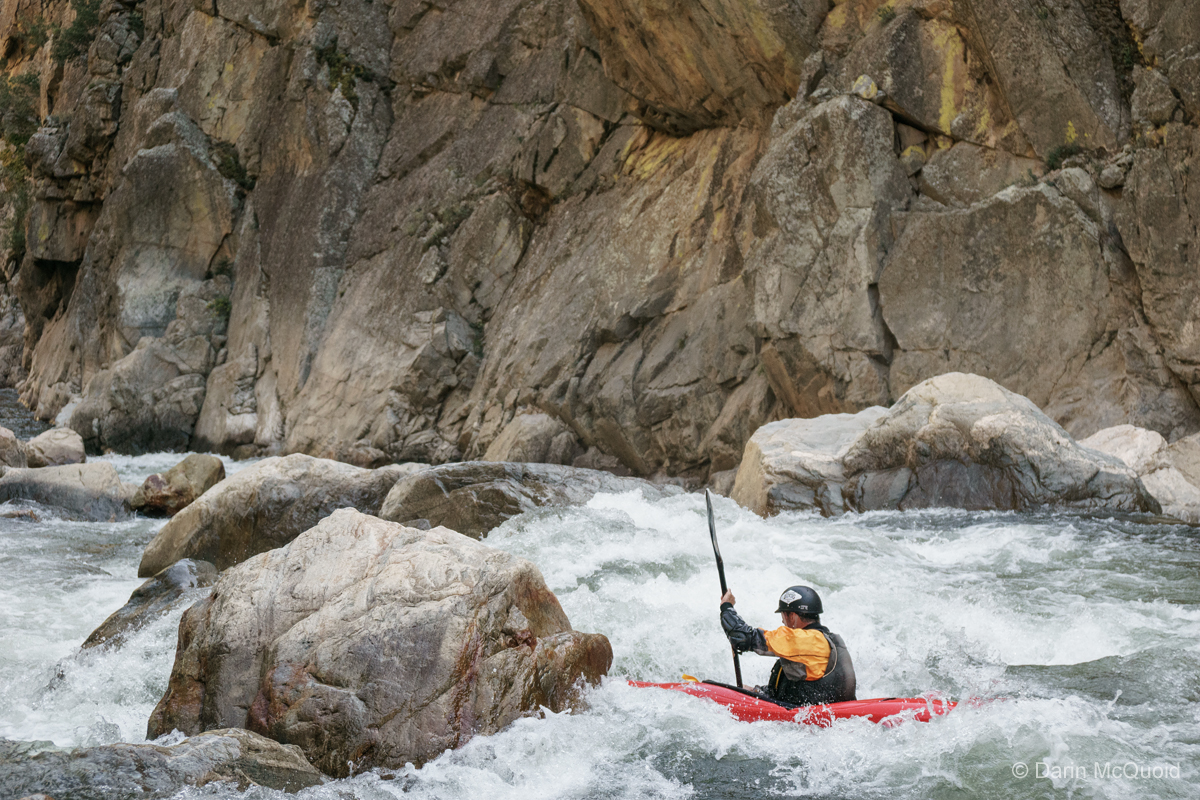 In the Horseshoe Bend rapid we run into our first issue of the trip as the last person in the group pins in the first move. They escape to shore quickly but their kayak is submerged. We're lucky, this is one of the few spots in the canyon where we can make our way back upstream to help. It takes us nearly an hour to get it out with some creative rope work. Thankfully nothing is lost and we're able to continue downstream.


Ian Janoska runs "the waterfall" as we've been on the water almost five hours. 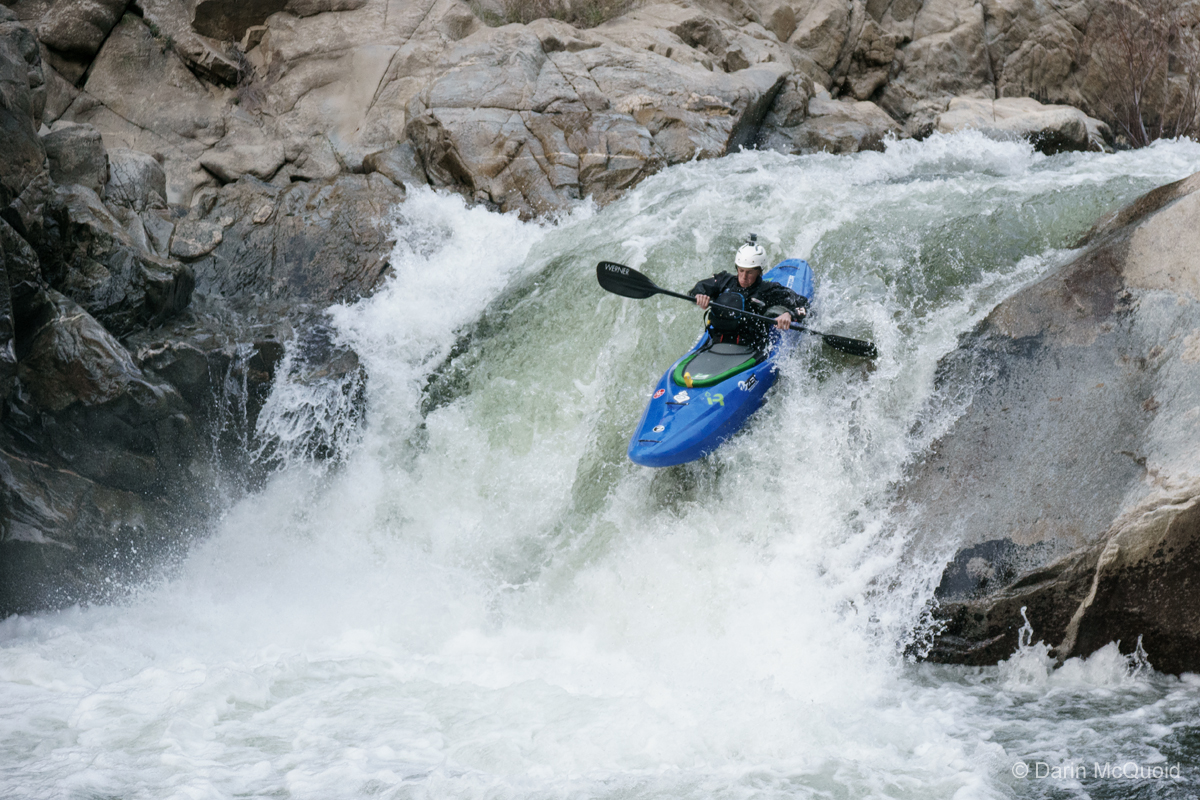 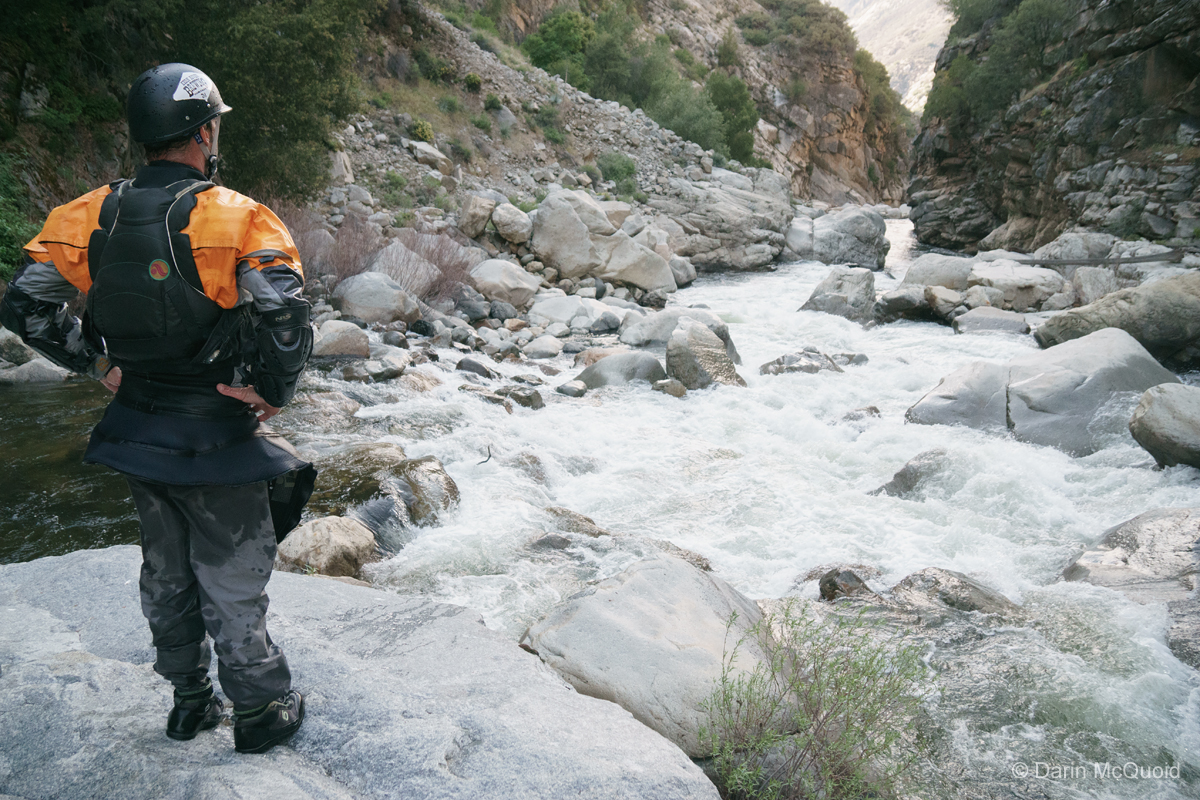 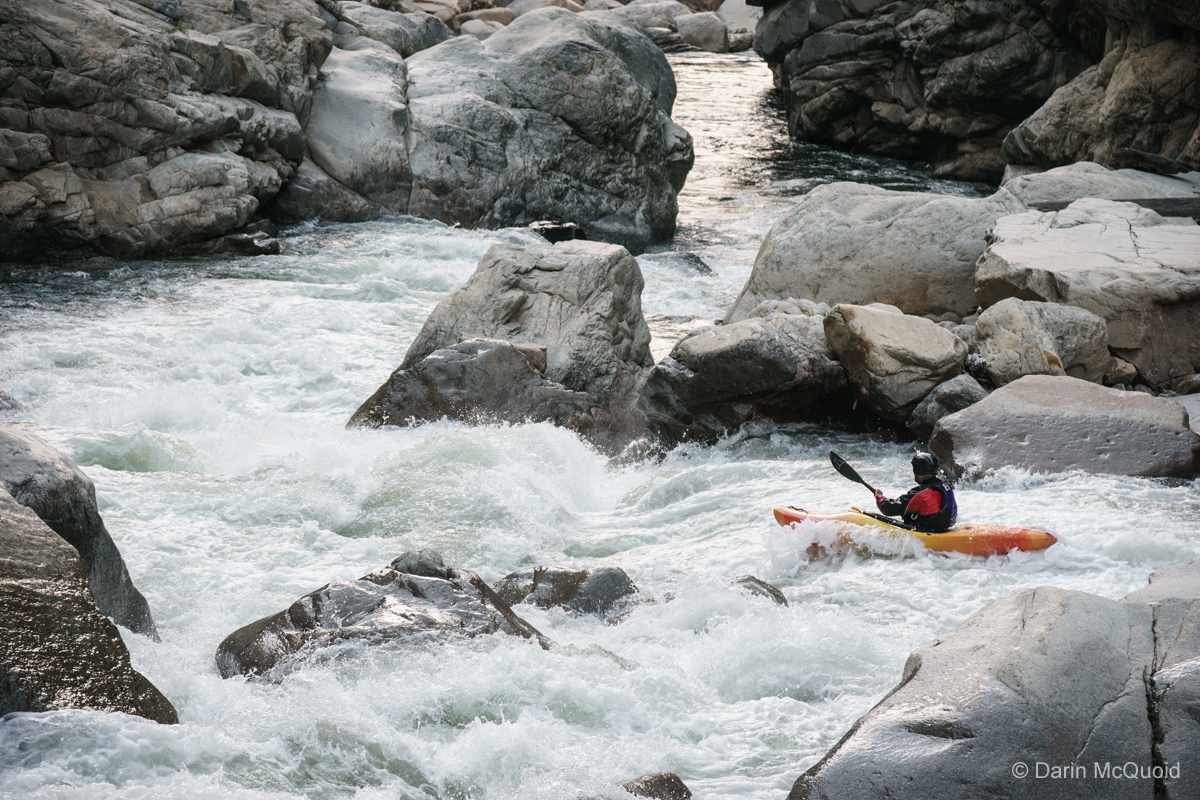 At the exit of the canyon is a final fun boof, a good finish and one of the cleanest rapids of the run. 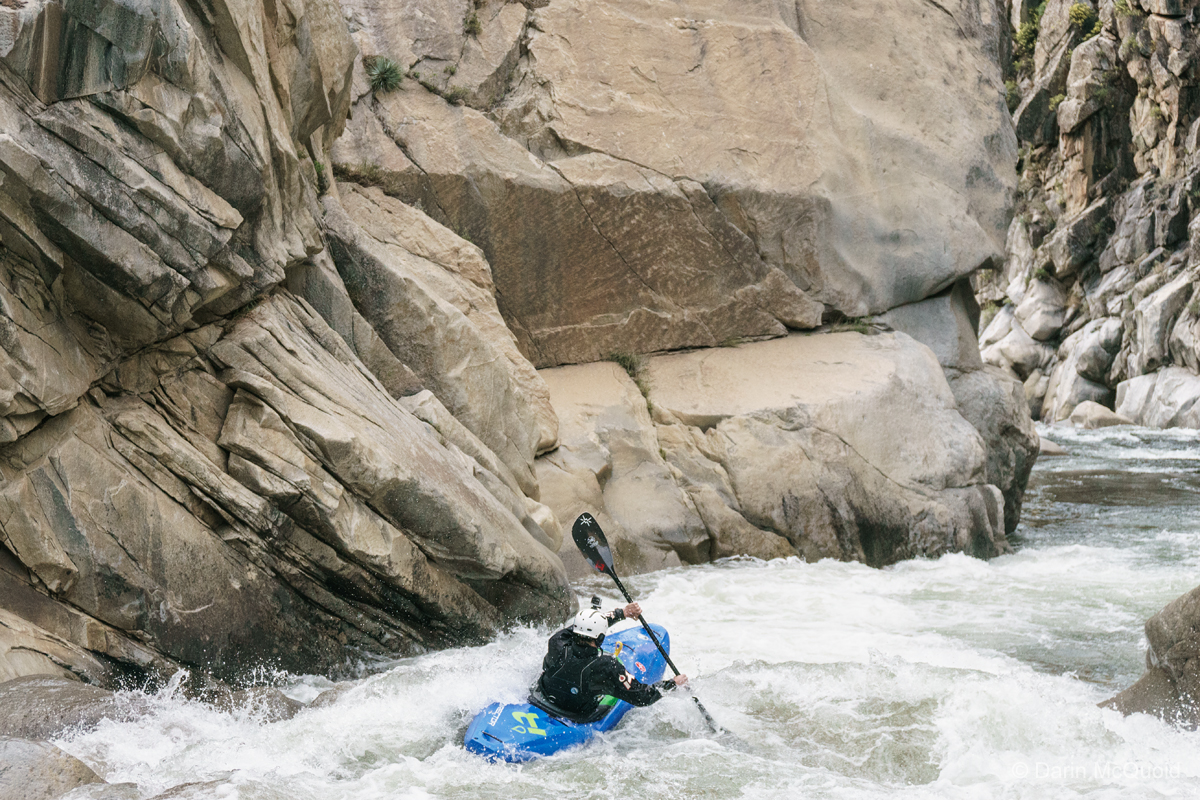 From there on it's read and run III-IV. We pull into camp just above the Middle Fork confluence and it's just before 7pm. It was a longer day than expected, but we still have a few minutes to enjoy sun before the mosquitoes come out. 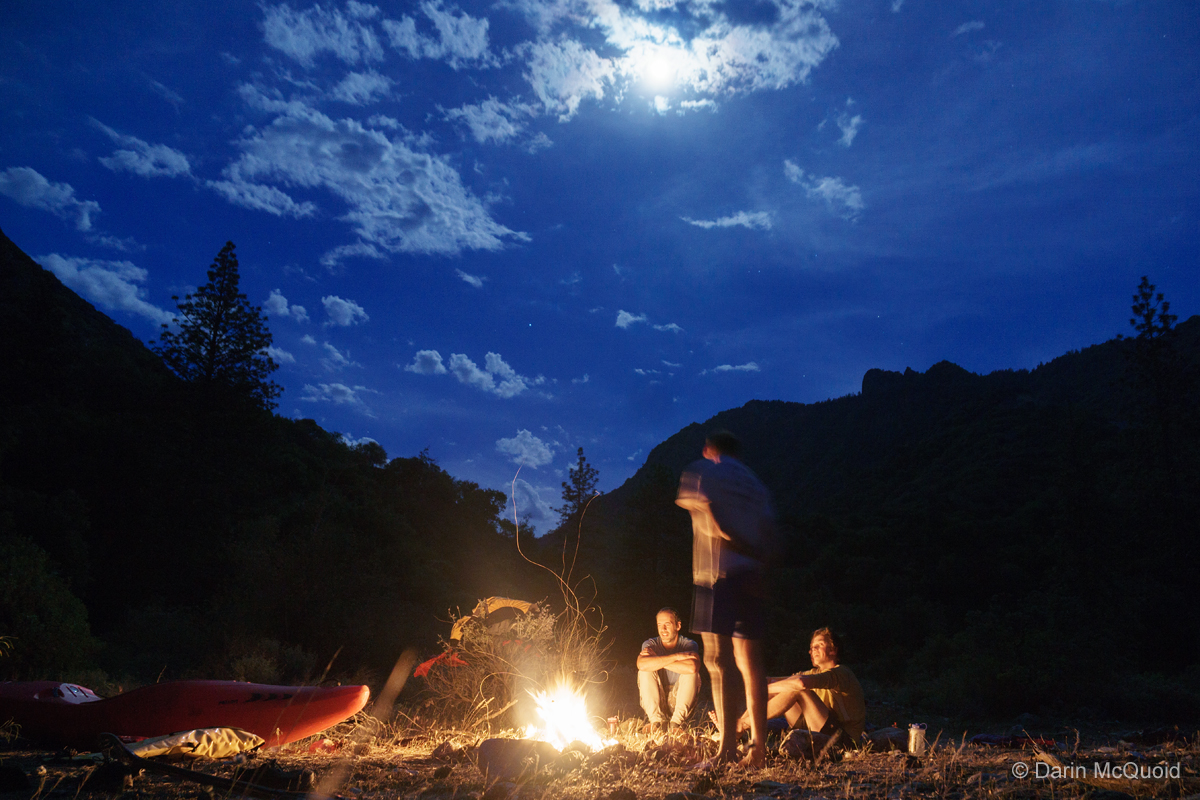 Sitting around the fire we talk about the day. Our groups consensus is that the whitewater was good but not great. The scenery is fantastic, while it's rare to get a feeling for the overall depth of the canyon the inner gorge has incredible rocks. It's well worth doing just for the scenery and approach the whitewater as a bonus. One of the best two day runs in California? Beauty is in the eye of the beholder. There actually are not many often run two-day class V sections in California. The common ones are Dinkey Creek, South Merced and Upper Cherry Creek.  It's a tough list, in any other state maybe South Kings could be one of the best, but of on this one I'd always choose South Kings last for pure quality of whitewater. The scenery on the other hand is right up there with Upper Cherry Creek, and there is no hiking. Perhaps the run is more fun and less stress at lower flows as it forms channels and reveals the barely covered rocks we seemed prone to hitting.

The best whitewater of the two days is Garlic Falls, which can be accessed as a day run, but that's a different story.


Hike Out to Yucca Point or Continue on to Garlic Falls.


Other Beta: A Wet State, The Next Horizon Line, American Whitewater.