Steady Brook
IV-V
While driving south from the Torrent River, we caught a glimpse of a gigantic waterfall in Steady Brook, a ski mountain village only five minutes north of our intended destination; Corner Brook. 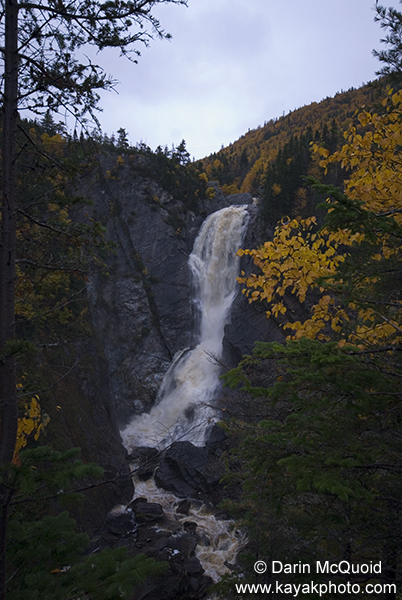 Scouting the waterfall, Chris Korbulic and I enjoyed the view and then wrote it off, and from the viewing platform it looked pretty flat above the falls too. 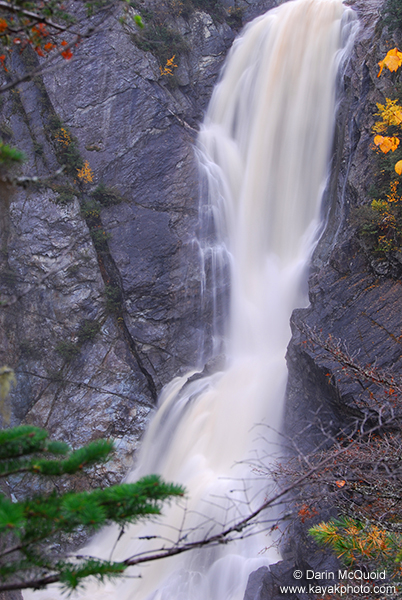 When reunited back in town, we checked the topographical map and sure enough there was plenty of gradient above the falls, and with a light overnight rain we headed back up to Steady Brook in the morning. Our access was great, we followed the road all the way up to the inlet for the town water supply and put in below it.  Right off the bat this river felt like home to me, kind of small, a bit manky and steep.


Nick Troutman paddles off around a blind corner on Steady Brook. 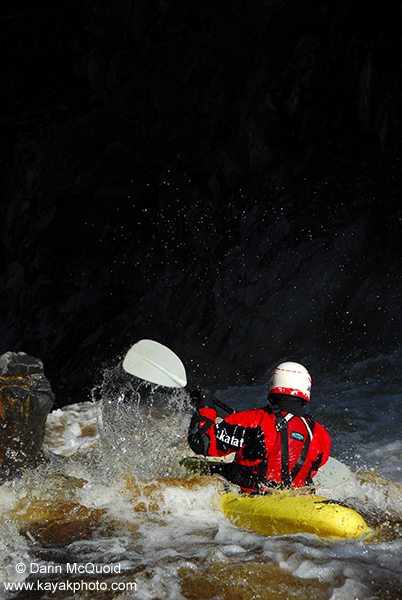 With steep gradient and blind corners, we had already scouted several times before arriving at a decent sized slide. I got a quick verbal of “down the left channel, enter just to the left of the rock” followed by “it’s manky, just keep it upright and pointed downstream”. I came in the right spot and kept it downstream, but ¾ of the way down pitoned something and came all the way over the handle bars onto my face and chest. I distinctly remember thinking “I’m so glad I have a full face and body armor on”. It paid off on this one, I rolled up before the bottom and was ok, didn’t really even take a hit. 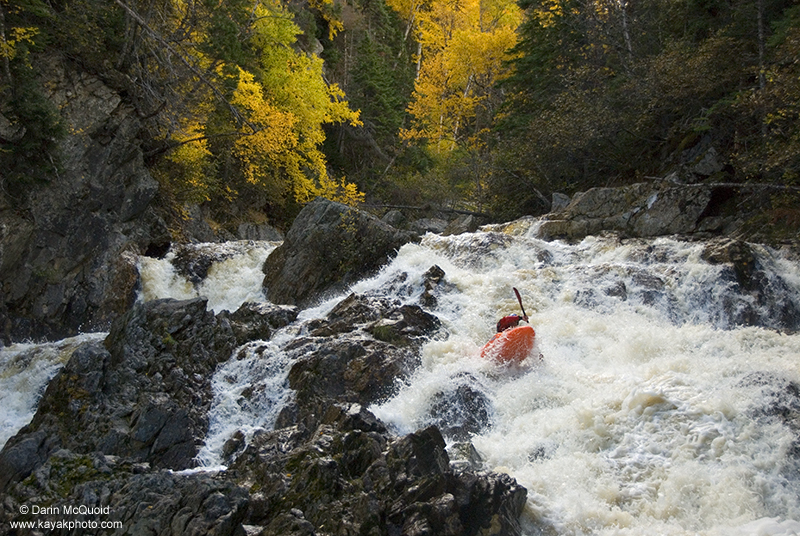 Nick went next and had no problems, skipping down the mank with ease. Chris lined up and his bow got pushed a bit left in the entrance, causing his boat to catch on the shallow rocks and tip him downstream. 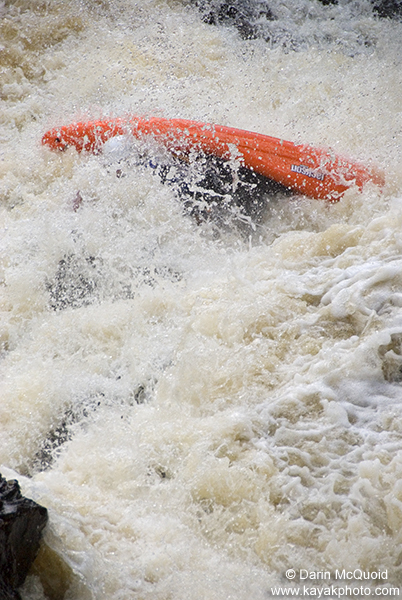 To our surprise he stopped upside down, in a low volume slide pin, but using just his knuckles he pushed his way upright and out of the pin.


Chris, with a good attitude towards the most torn up knuckles I’ve ever seen. 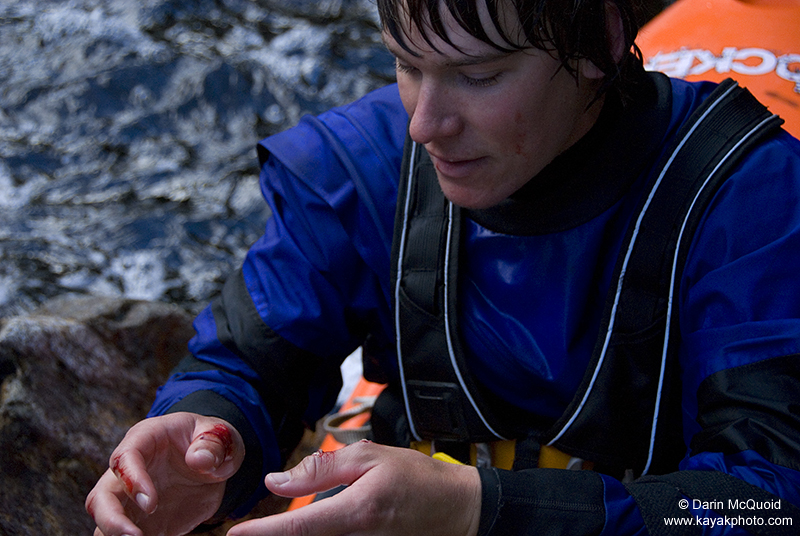 We regrouped at the bottom of the slide and Ben hiked out due to some equipment issues, and Nick, Chris and I debated hiking out but opted to push down for this “quality first descent”. Surprisingly enough the run started to clean up, and we ran some fun rapids and boofs before the next major horizon line. 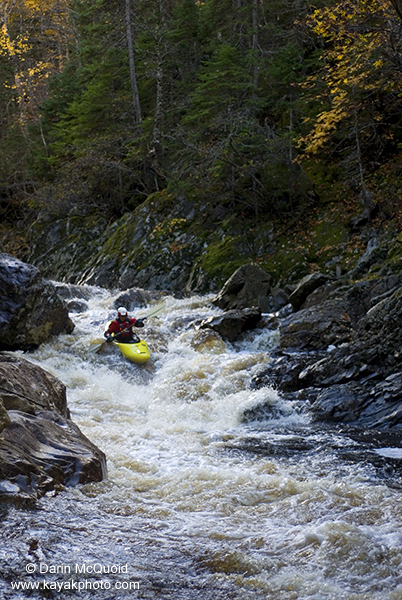 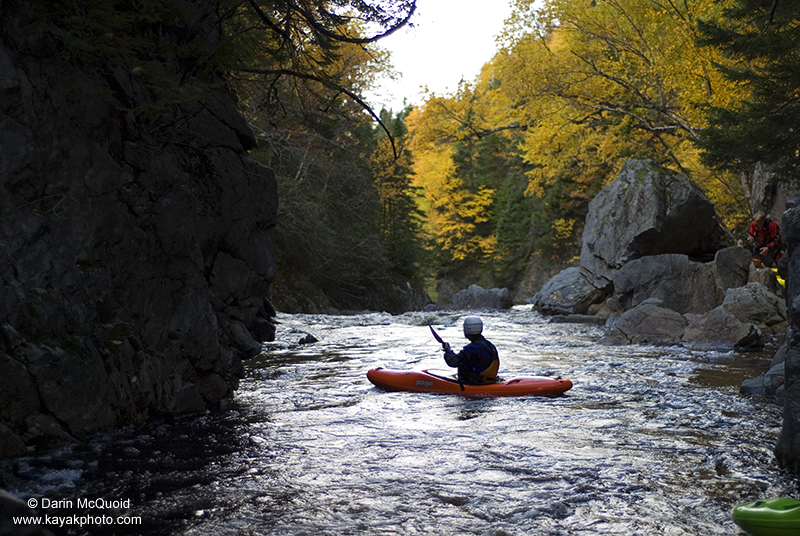 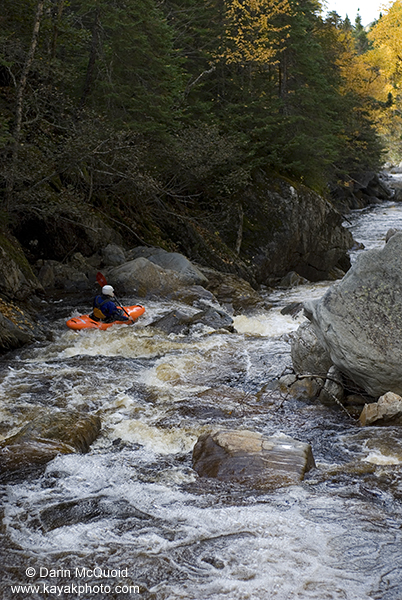 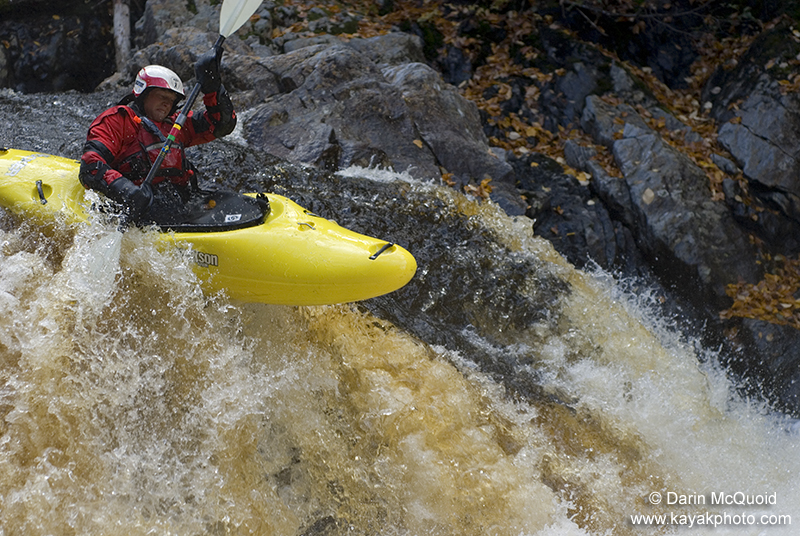 Then all the sudden we were at a markedly larger horizon line. We scouted down the right and then began to debate our options. The drop was nothing too huge, a thirty foot waterfall, but it had a tricky lead in, with at the lip move and questionable depth landing. We discussed options of portaging, which looked bad, hiking out, which looked ok, and splitting up. After the slide incident we understood why Chris just wasn’t feeling it, and Nick's back was sore from the Leg Pond Feeder incident. Beautiful rock really set this falls off, and I had a special feeling about it. However I really wanted someone else to go first because the photograph from above would have been epic.

We decided that I would probe and see how it went, if it was a soft hit Nick would follow and Chris would take video and then hike out on the left. It was exceptionally cold out, just a few degrees above freezing, so I did a bunch of jumping jacks and arm swinging to get my blood flowing again, knowing I would have to paddle a bit for this one.

The entry was a two foot boof landing on the lip of a sticky pour over hole, then the water slalomed from wall to wall and slid moving to the right off the waterfall, which had a shelf on the right. The key would be not getting stuck in the first hole, and then making a late right to left move at the lip of the falls, straightening out just at the last second.

All fired up and ready to go I eddied out above, signaled to the team and peeled out. Boofing the first hole, and melting into the second hole, I wasn’t surprised to have to power through the backwash into the slalom, which went by quicker than I expected. As the lip approached I drove to the left, and at the last second took a bit left stroke to straighten out and tuck, melting at the bottom. Resurfacing upright I was thankful that my line had worked out as well as I had imagined.


Nick Troutman gets left on the waterfall. 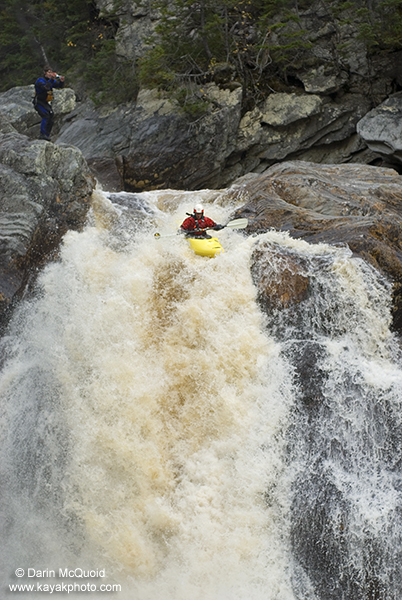 I quickly scouted around the blind corner that was downstream, and saw a large eddy. Nick and I paddled around the corner, and sure enough, we were at the take-out! The horizon line of Steady Brook Falls was just gigantic, so we had to get a picture of it. The house by Nick’s leg is all the way on the other side of the Humber River. 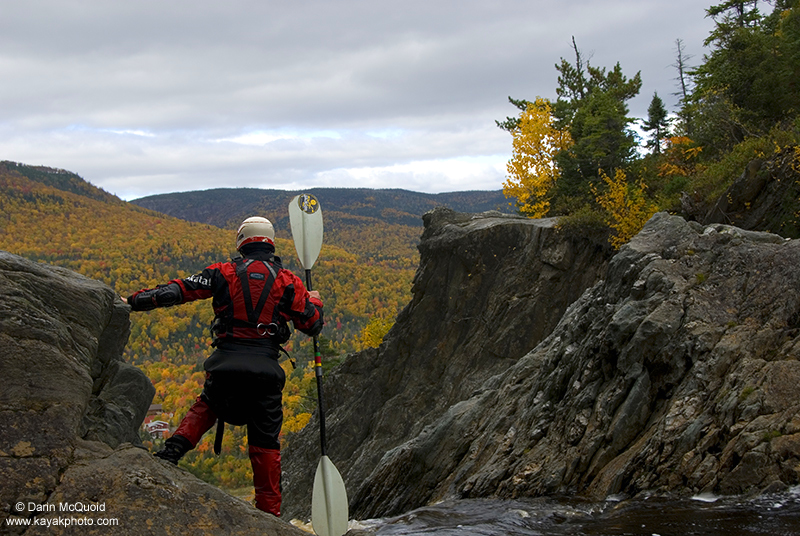 Grateful to have another fun run in the books, we headed back to Corner Brook to find a coffee shop, warm up and check the weather.