West Cherry is the lesser known tributary to the famed Upper Cherry Creek. If you talked to five different people about West Cherry, you’d probably hear five completely different opinions about the run. I’ve heard West Cherry descriptions vary from “the best two day in California” to “the not so classic”.

West Cherry starts high up in the Emigrant Wilderness Area, and eventually joins Upper Cherry Creek several miles above Cherry Lake, where the water eventually makes its way into the Tuolumne River.


We were going in over a week before anyone else was thinking of West Cherry and had to deal with some extra access challenges. Dustin Knapp, Ben Stookesberry and Ryan Knight. 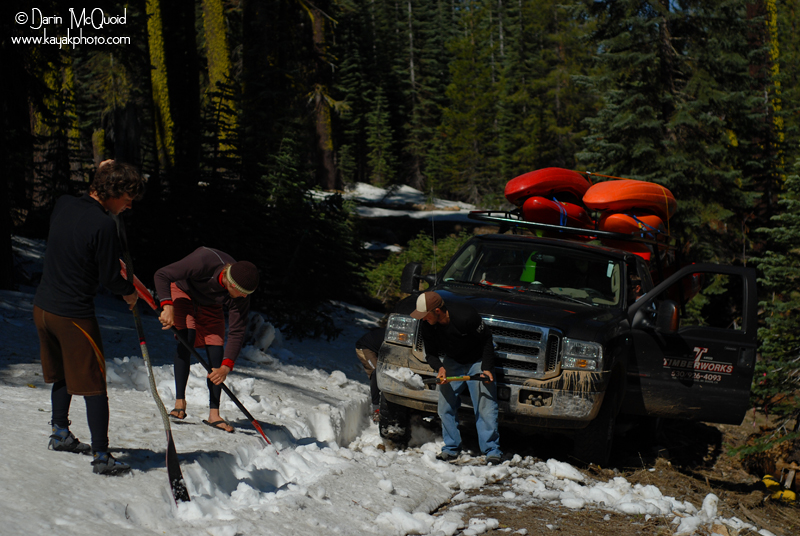 There are two access points to West Cherry, one that involves a forty five minute hike, and an upper access, with a considerably longer hike that was reputed to be “three hours”. Because our group didn’t know exactly which road to take for the lower access, we ended up at the upper put-in after some serious delays due to large snow patches.

At the trailhead Dustin Knapp showed us the most innovative kayaking carrying system I have ever seen, utilizing his AT2 breakdown, a hip belt and a Kokatat life vest, he made levitation possible. 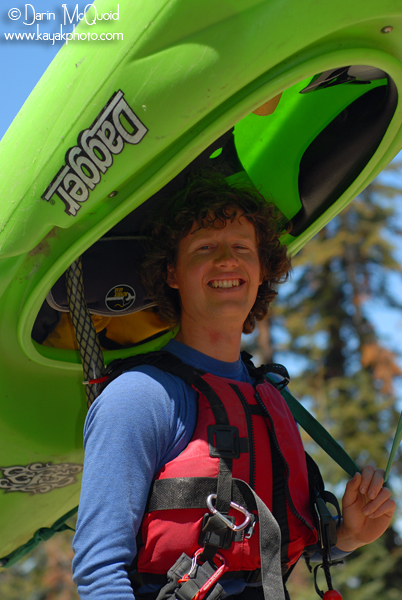 The upper hike only adds on a few miles to the run, but it drops kayakers in right below the Graceland, first run by John Grace and followed by quite a few others. 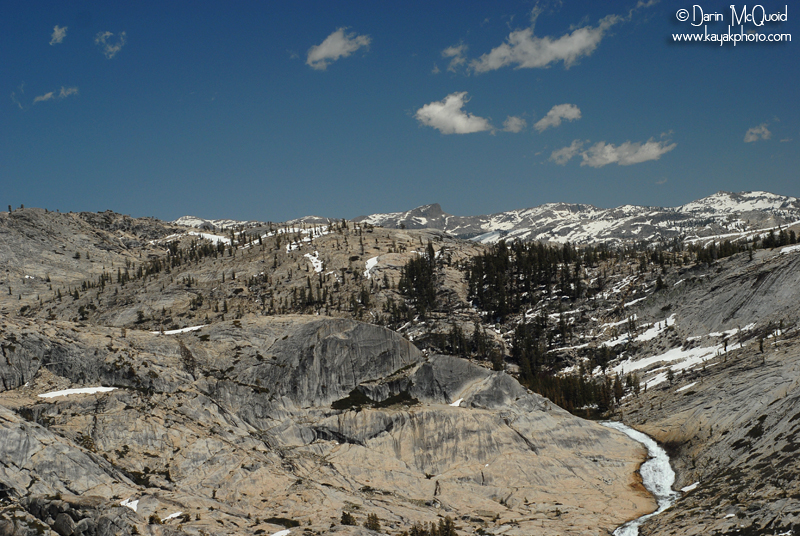 After four hours of hiking we were rewarded with views of the put-in slide, now all we have to do is get down to the river… The final drop to the river wasn’t as bad as expected, and with just over five hours of hiking behind us we were glad to be there enjoying the scenery, and didn’t have the time or desire to really consider Graceland.


Dustin Knapp and Ben Stookesberry soaking it in. 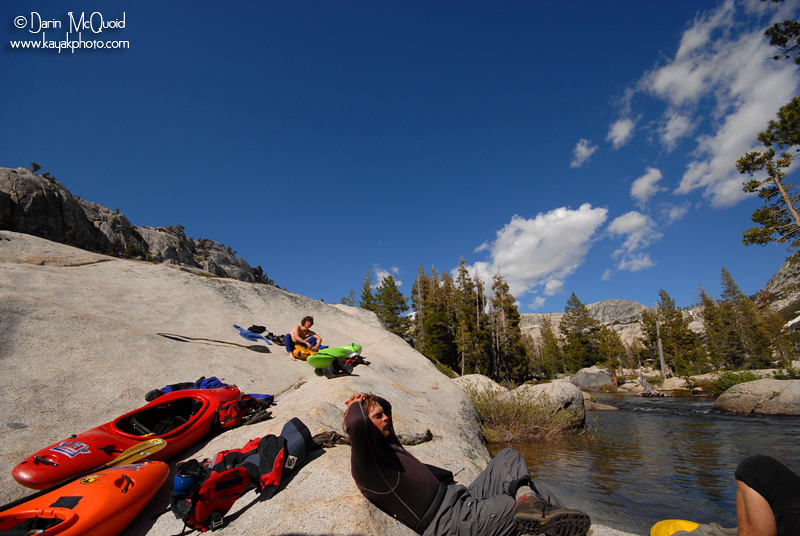 Supposedly the in between rapids on West Cherry aren’t all that great, but at our exceptionally high flows, the quality factor of the in between was high.


Devin Knight gets it going on West Cherry. 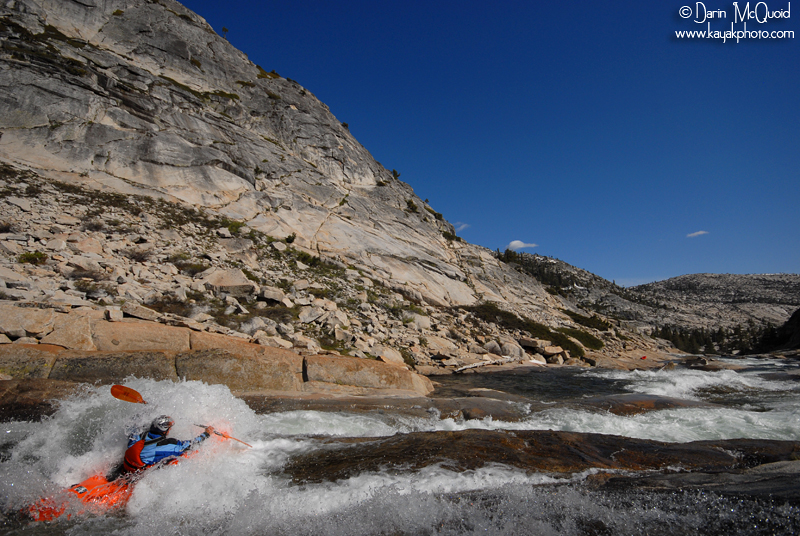 Other than the put-in slide and some minor in between drops, the upper section of West Cherry is all about one big, well gigantic, long slide, waterfall, rapid thing that looked terribly marginal for my taste.  Ben and Devin on the other hand, gave it a good scout and seal launched in above the waterfall and ran the bottom three quarters of the beast in the evening light, while the rest of us resumed carrying our boats down the granite slabs.


Ben Stookesberry fires up the waterfall into the big rapid. 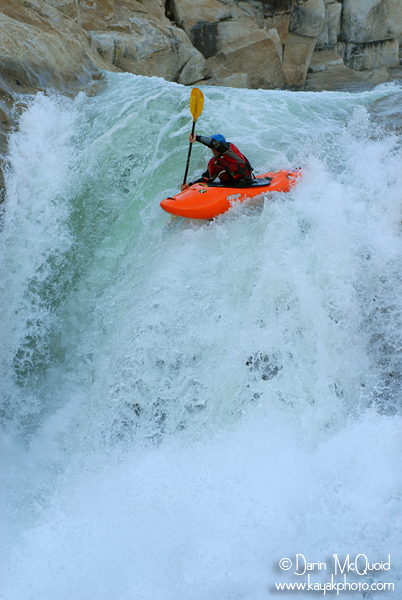 Devin Knight in the rapid part of the aforementioned drop. 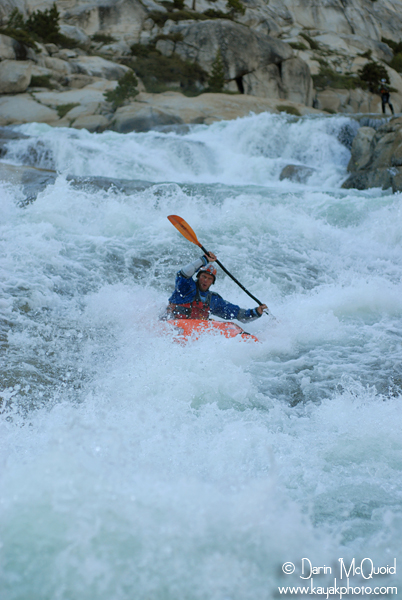 Photos can’t really do the drop justice, as it wraps around two corners and is about a quarter mile long top to bottom, and contains several serious moves. Downstream of the large slide the river went into a mini gorge that was too manky for our taste, so we were back to portaging, all the way down to a few small drops that led into a nice meadow that we found a nice camp site just above more slides. 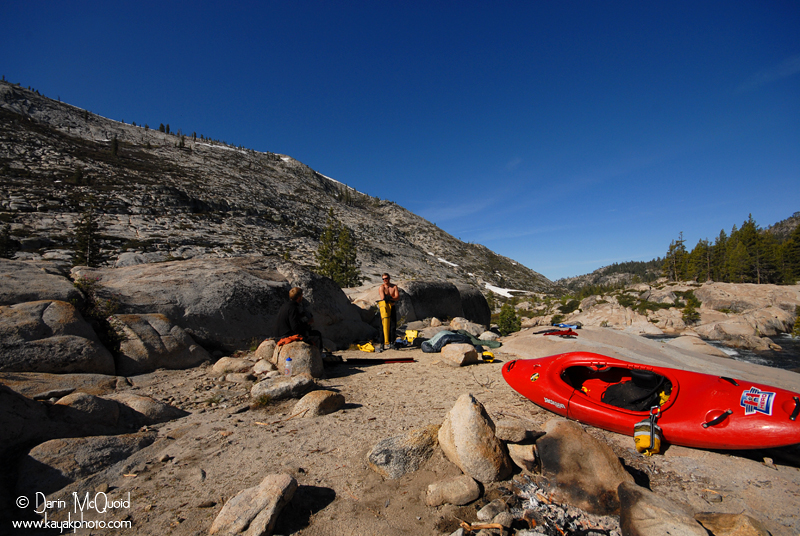 A peaceful night of sleep in beautiful California weather had us up for an early start for second day, which we knew would be long. I was getting a bad impression of West Cherry, but then the run suddenly turned to gold right below our camp, with several of the video drops commonly seen from the run.


Ben Stookesberry enjoying West Cherry all the way through. 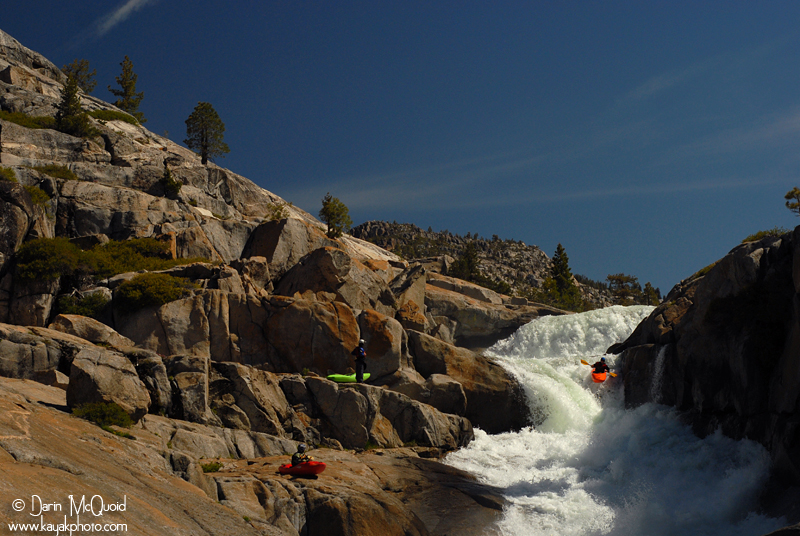 I think Dustin Knapp was relieved as I was that the run was starting to get good, really good. 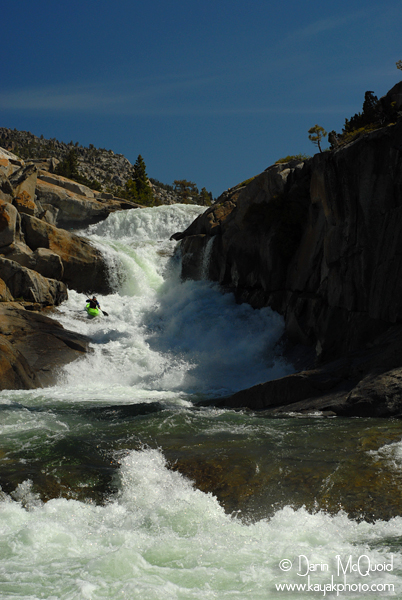 Two West Cherry drops had stuck in my mind, one was a dubious pothole waterfall, and the other a big boof into a series of slides. With high flows, the slides had turned into ledge holes, but the top boof looked so fun I couldn’t turn it down.


The marquee drop on West Cherry. 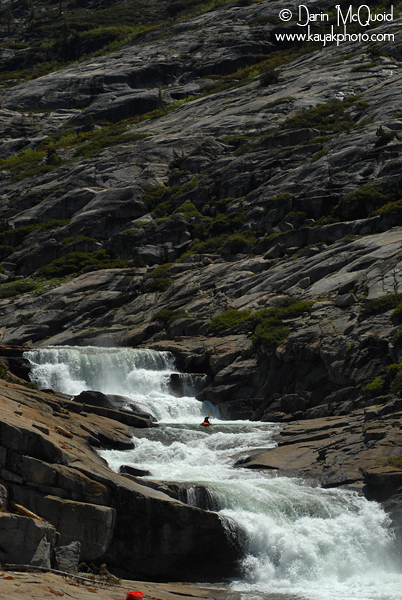 The early morning light made the glare rough, but I wanted to get the whole thing in one shot. Matt Thomas boofing away on the entrance, and about to clean it up. 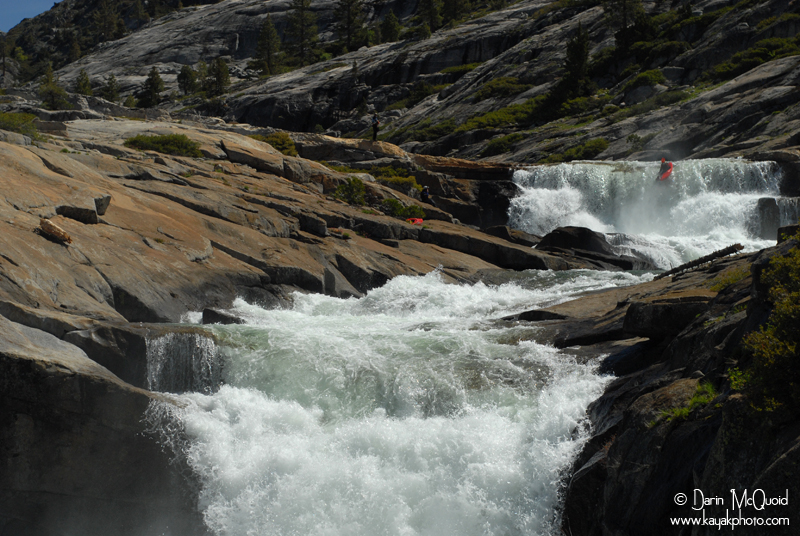 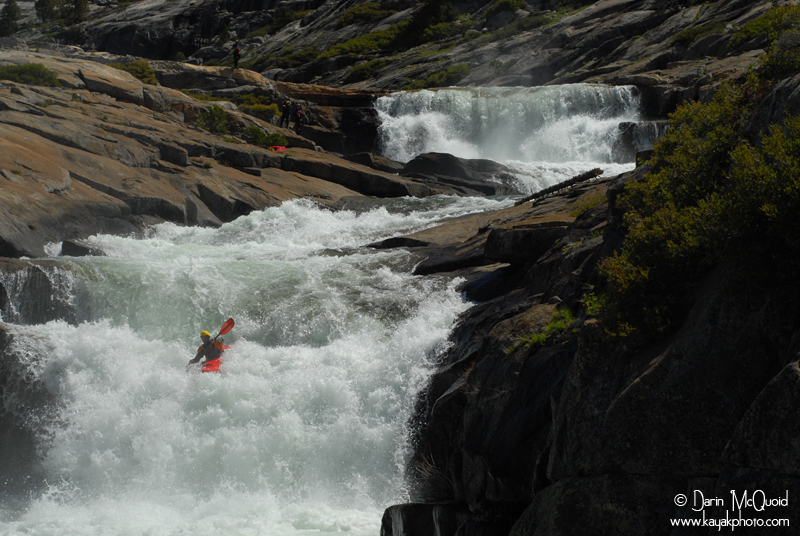 Glad to have run at least one epic rapid, we pushed into a mini gorge that leads into the infamous pothole waterfall.

Devin Knight enjoying the mini gorge above the pothole waterfall. 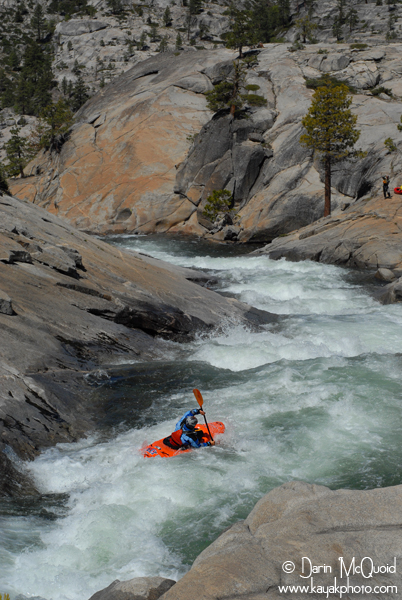 I didn’t bother looking at it from above, some drops I just have no desire to run, and this one makes the list.

Dustin Knapp looking back up at the pothole. 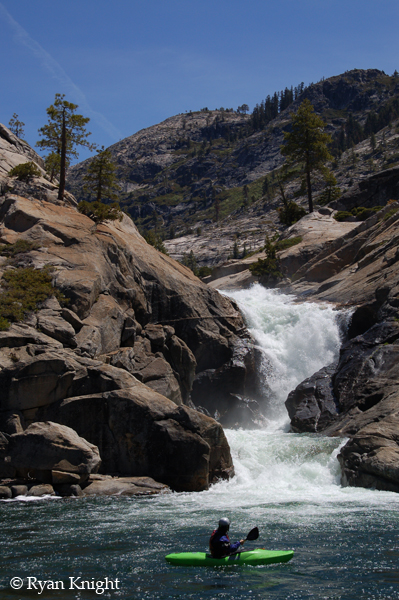 Completely scoured granite is the standard for West Cherry, and it was no surprise when some great slides followed the pothole portage.

Ryan Knight enjoys a slide that is smoother than it appears. (This one has broken ankles at lower flows) 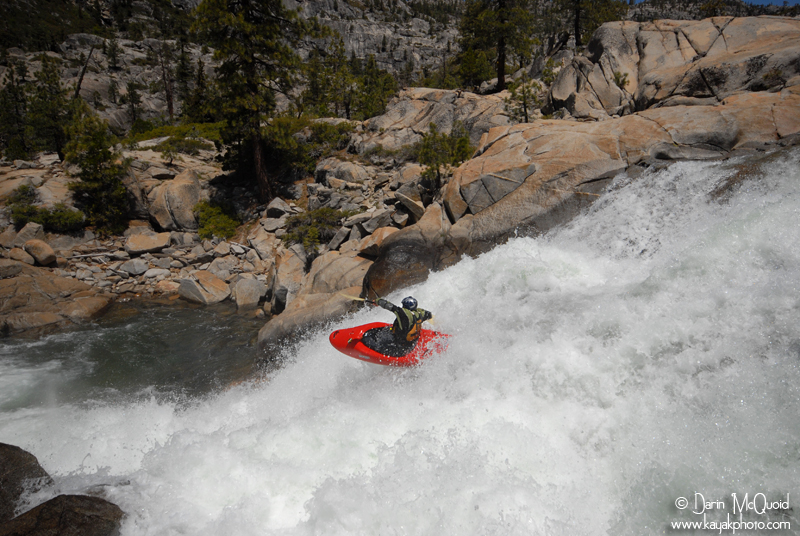 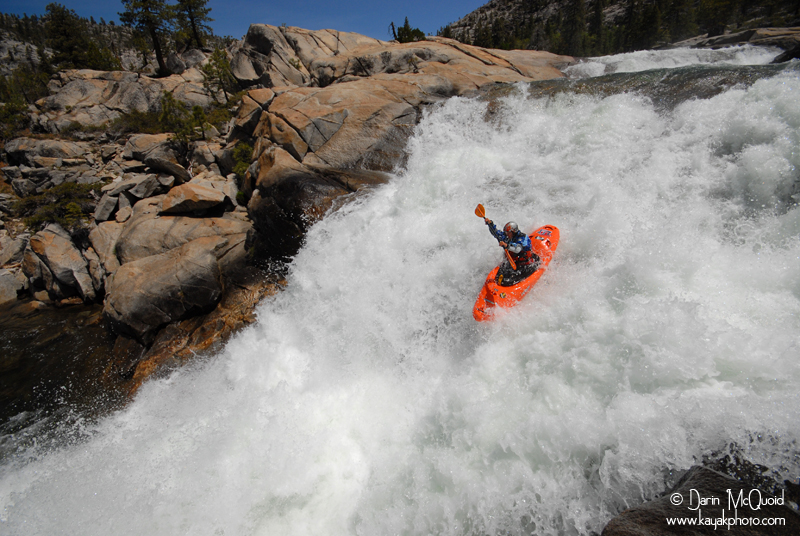 High water made the Charlie Beavers drop too marginal for our taste. 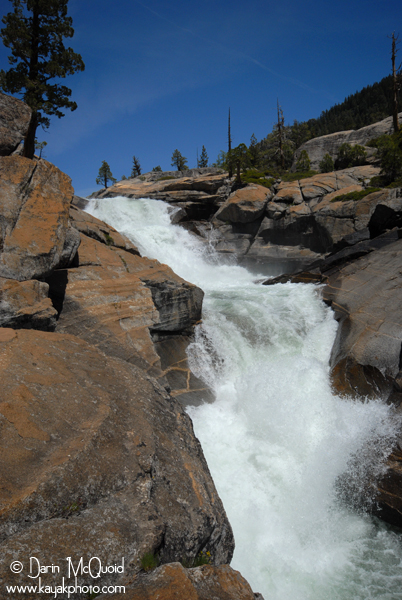 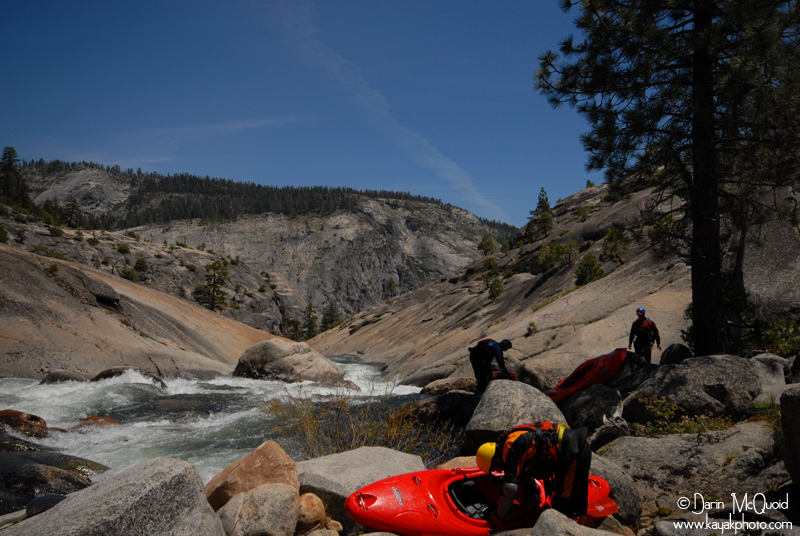 Fantastic views help make up for the long portage, Devin Knight just above the confluence. 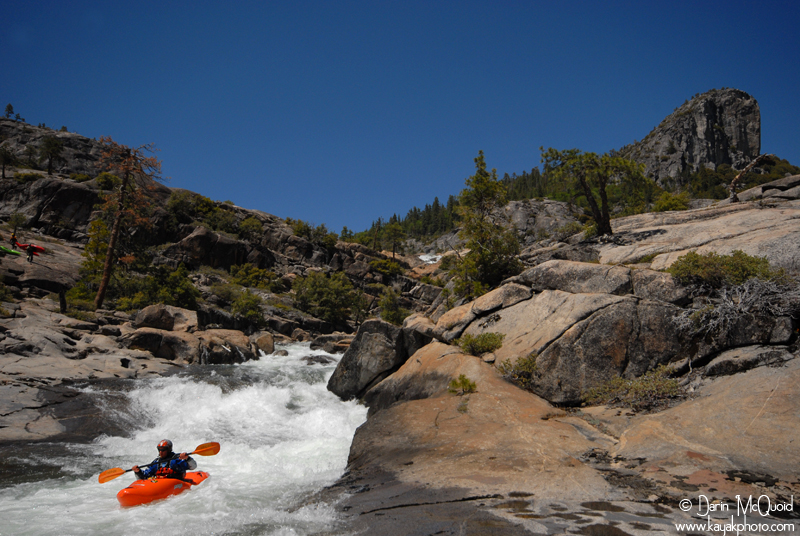 
Matt Thomas below the confluence, throw the horns for the holes! 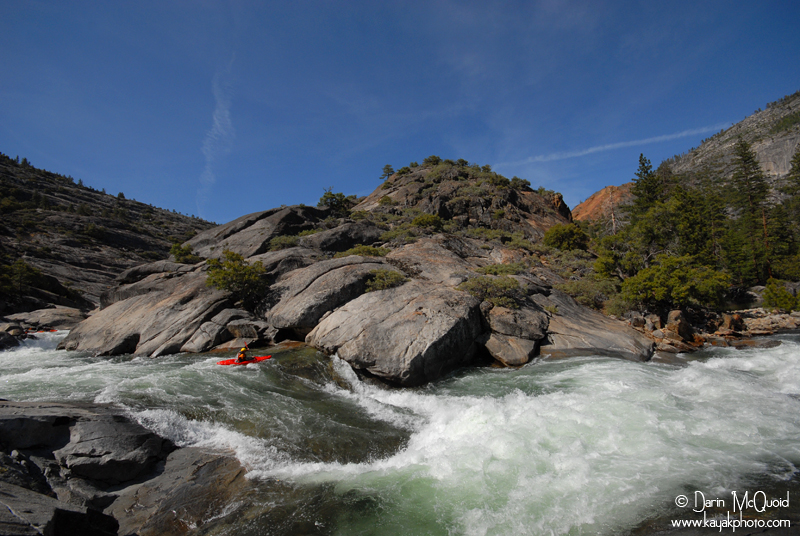 Some of the normal portages can be run, and some rapids turn into portages. Most of the slides turned into gigantic holes, this section was a blast. 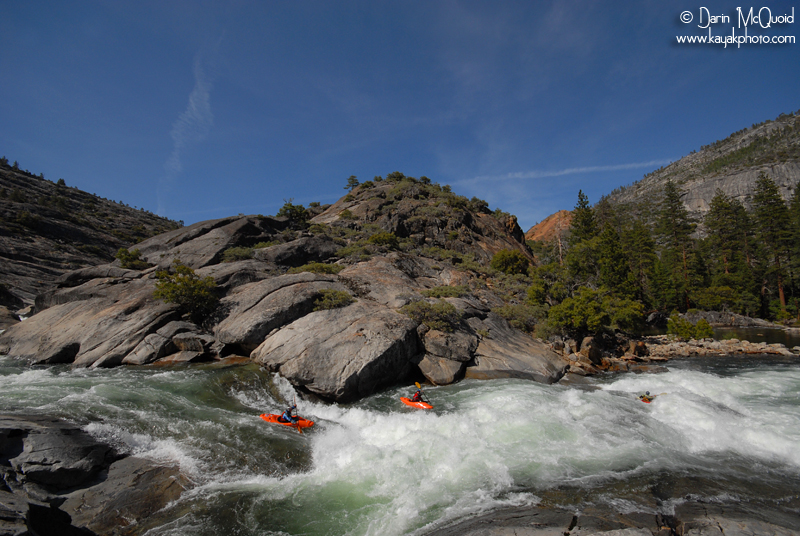 High water also necessitates portaging the final Upper Cherry Creek gorge, right down to our paddle out on Cherry Lake. 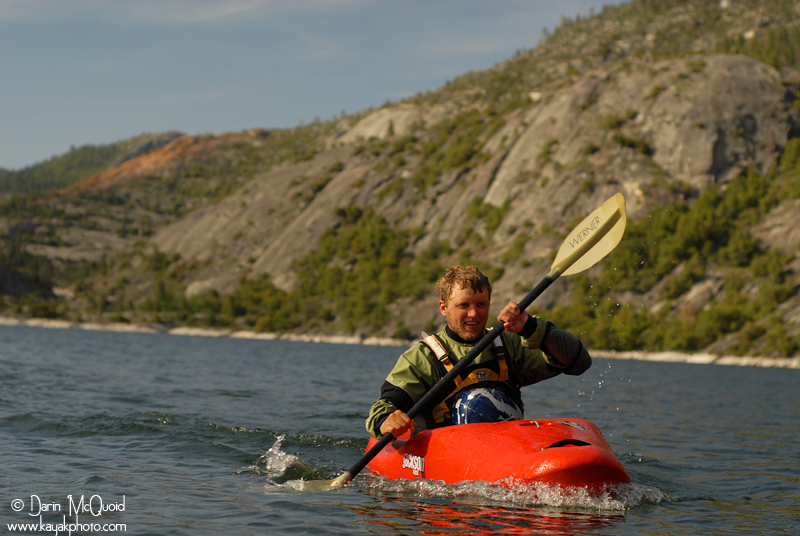 The paddle out is short, but then another twenty minute hike to the parking area is in suite. If I did West Cherry again, there is no doubt in my mind that I’d use the lower access, since most of us more or less carried our boats about eight hours to arrive at the same spot we could have arrived at in forty five minutes. There isn’t one drop in the upper section that I would miss running, and it would make the other portages much more bearable. As it was our walking to boating ratio was skewed because of the hike in. While I’d consider West Cherry to be a good run, with great scenery, water quality and a few good drops, I wouldn’t say it’s a classic, and between the long hike in and high water I was calling it the best two day portage in California, but I would go back using the lower access to do the run again.

The shuttle is beyond my description, and I don’t even know where the lower put-in road is. This one takes some maps, or preferably, someone who has done the run before. There is no gauge for West Cherry, but of we did it while Fantasy Falls and Dinkey Creek were going, and it was high.