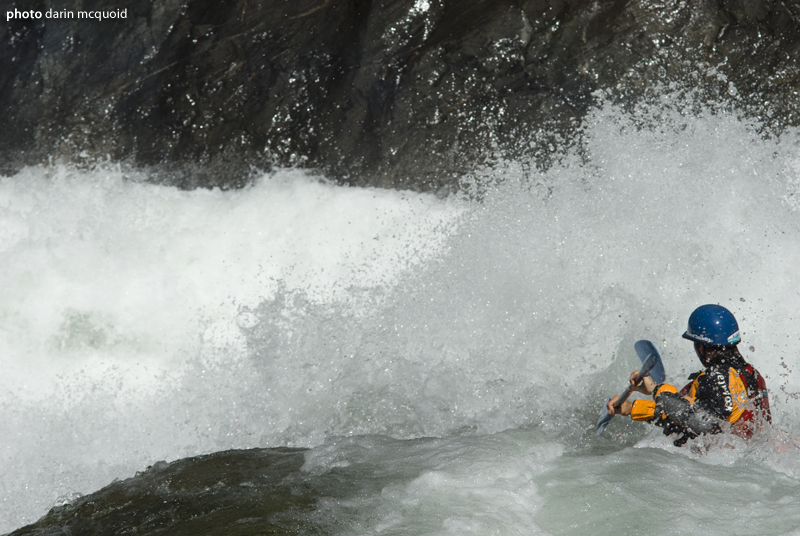 Legend of Yuba Gap has surfaced during many shuttle drives on the upper echelon of California kayak runs. I first heard of the run from Devin Knight, one of the few who had done the run prior to the 2009 flow study. He referred to Yuba Gap as one of the best runs he had ever done, full of locked in gorges, bedrock slides and long boulder gardens, all in a wilderness quality setting. Calling any run a "best" in California is a big statement, considering Big Kimshew, the South Branch, Upper Middle Cosumnes and many others, the state has many of the best day runs in North America. So why has the Yuba Gap escaped the media blitz and notoriety of it's fellows?


It's not that Yuba Gap is the most remote run, the put-in is only five minutes off highway 20, and the shuttle is straight forward. It's not the amount of portaging as only two are mandatory, and none are technical or require rope work. It is a longer day, but possible to do in a day even if you have never seen it, and only a four hour run if someone knows the lines.

Water, or lack of, has kept Yuba Gap a secret for so long. The run previously only had water from the unpredictable Lake Spaulding spill, and no gauge. Everyone that wanted to do the run had driven to it at least several times to find too much water, or fish flows. Generally the lake would spill 1,200 for a few days then get shut off, offering no window at all. Thanks to the hard work of American Whitewater, we had our first flow study on the South Fork Yuba in 2009, with a release of 300cfs for three days on Yuba Gap.

The run is seven miles long, from Bowman Lake Road to Golden Quartz day use area. All the flow comes from Lake Spaulding, and although the run has a short shuttle, it's very remote and once past the initial gorges, hiking out would be an epic undertaking.

Our first day we were lucky enough to meet up with Little Dave, Charlie Center and Lane Jacobs, who had all done the run before. What followed was an intense routing fest with our over sized group of ten. The following day we went back with a nice three pack of Chris Korbulic, Taylor Cavin and myself. We set slightly mellower pace, taking time to get a few shots but still moving fast.

At the put in a steep "trail" leads to the river, and we floated a short pool to the first boulder garden. This rapid sets the tones for rapids on the run, a blind boulder garden, that while not exactly manky is only clean if you are dead on line.

A pool below the boulder garden reveals a tall horizon line, and if you don't know the lines, it's time to scout the whole gorge. Thankfully we knew the lines from day one, relayed the info and boofed into the gorge. 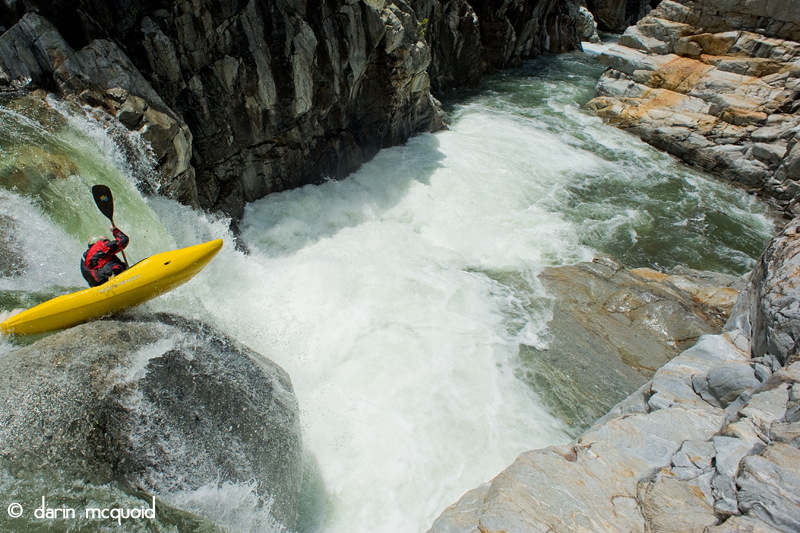 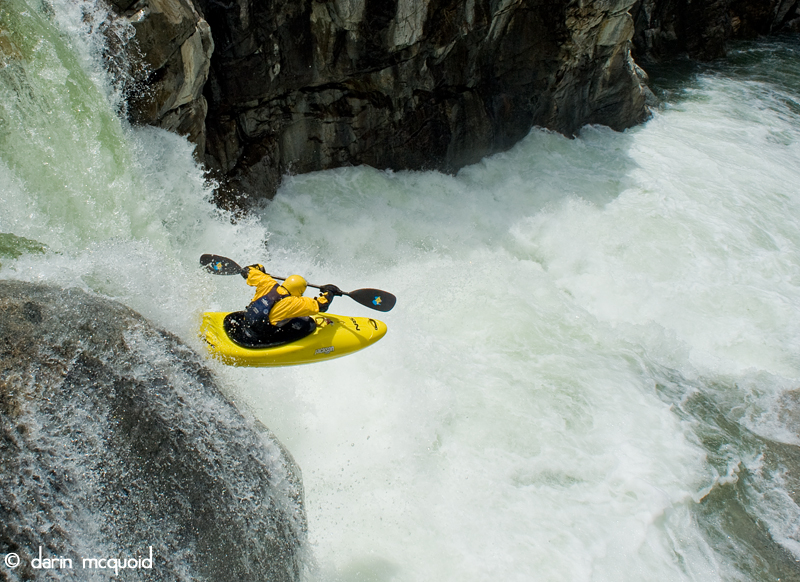 Yuba Gap has the best start of any run I have ever done, a 15' boof onto a pillow with a short slide after it, then a perfect calm pool, followed by a 20-30' high slide, a ledge and another nice big slide into a pool where the walls spread out and offer egress from the gorge. There is nowhere to get out at river level, so perhaps one day I'll hike down and get shots from the gorge rim. If you are gripped and not enjoying the run at this point, it's time to hike out, it only picks up in difficulty downstream.

A multi-move boulder garden leads into one of the longer portages down the left, ending at "Emerald Pools" and the start of the second gorge. Smaller slides lead into the first scout of the day. 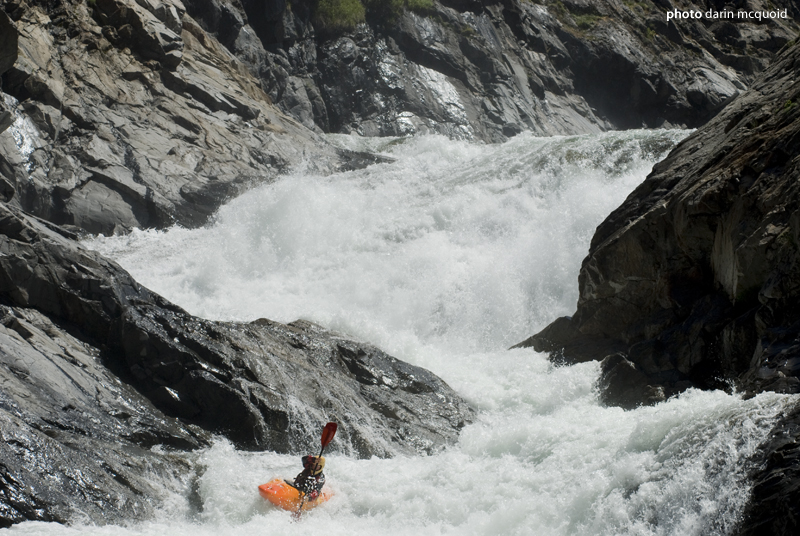 Devin had raved about the hourglass slide, and the feature was intimidating as it pinched int a 10' wide slot before opening up again, but the friction climb portage was even more intimidating.


Chris Korbulic getting a face full of the first pillow. 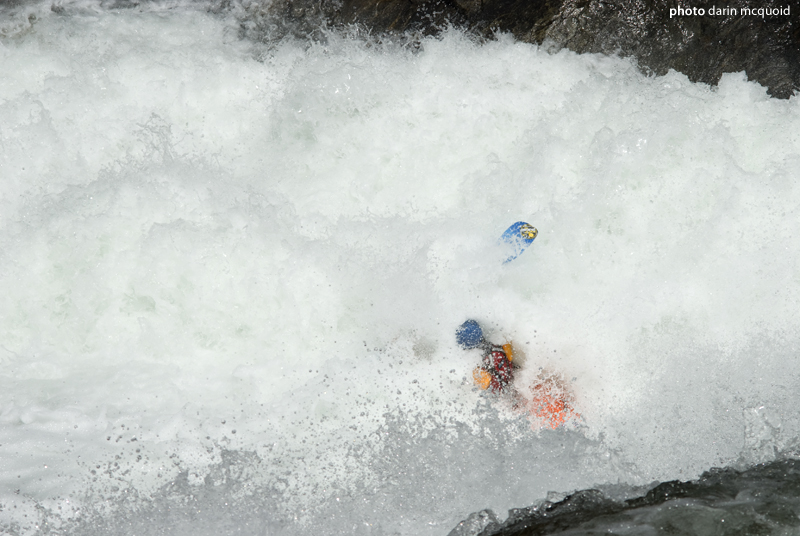 There is a nice big recovery pool before the next drop, a slide that mandates a quality plug into the depths. 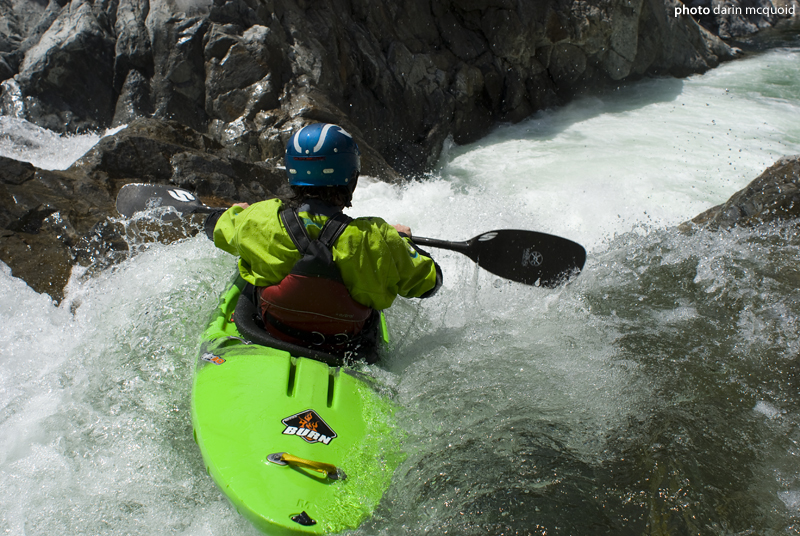 Four drops from 10'-30' high are required to finish the second gorge, many of which can't be scouted at river level. If the run has regular flows, an afternoon lap & hike back up could be done on this section.

Below the gorges, the river turns to big boulder gardens, interspersed with bits of bedrock and the steepest gradient of the section. A few portages are mixed in with the long, complex and occasionally sievey boulder gardens.


A quick portage around the Island on Yuba Gap. 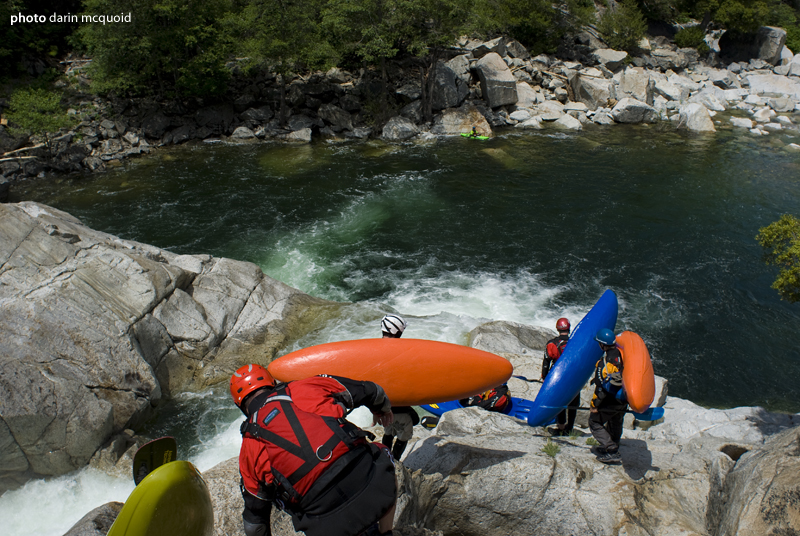 Taylor Cavin enjoys a great end of the portage. 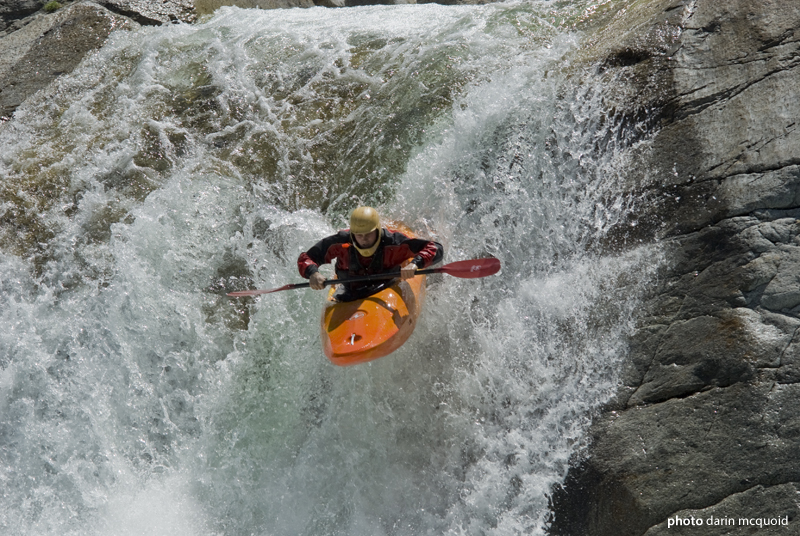 This side of the Island has only been run once by Lane Jacobs. 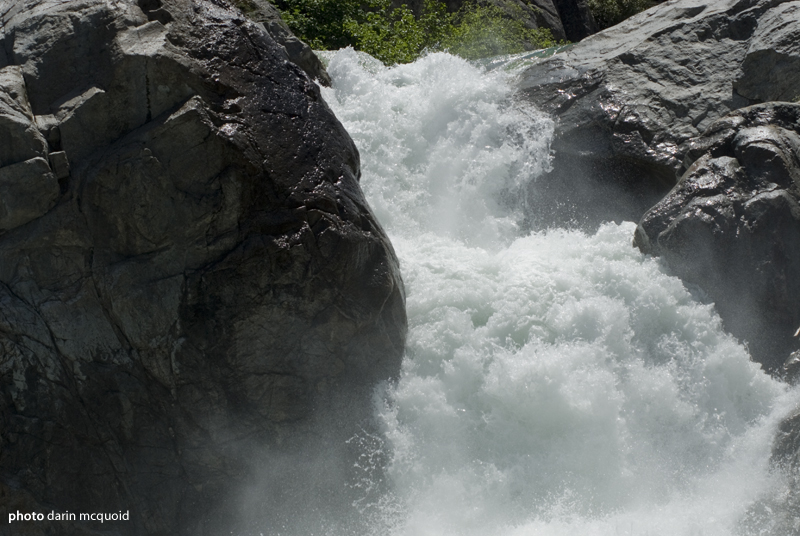 Steep boulder gardens, follow, until another quick portage around the entrance to a nice big slide. I consider this section the crux of the run.

Taylor Cavin bounces down the goods. 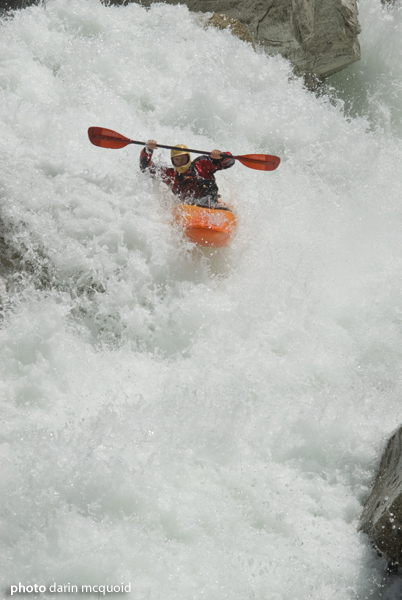 More boulder gardens link together after the slide, and then the river bends left and enters one last gorge of two big drops. The first is the cleaner of the two, a mandatory boof into a large pillow. The second drop is a twenty five foot high waterfall. Tragically there is a rock on the right side of the landing, and there is a line to the left of it, but it's barely more than a boat width wide.


Taylor Cavin runs the first drop of the final gorge. 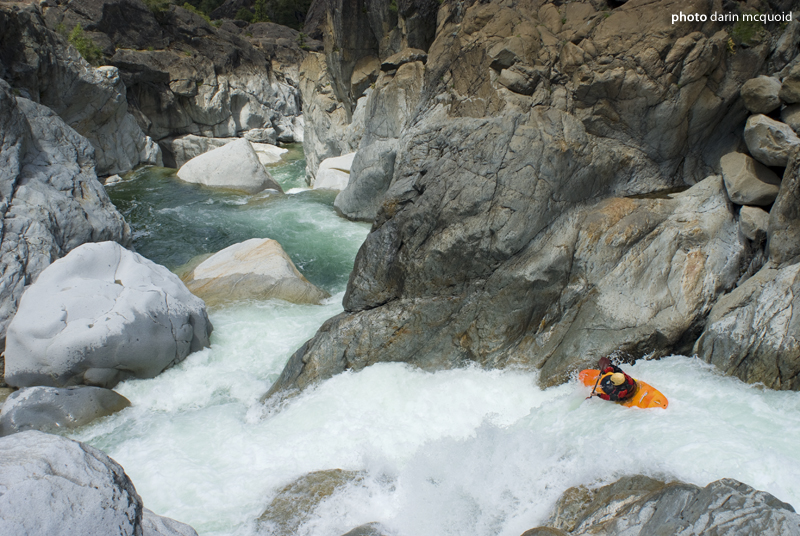 On both of my runs those who portaged went up and over on the left. During the portaged we inspected other options, and agreed that next time we would run the first drop (or portage at river level) and portage the top half of the second drop on the right, allowing us to run the slide at the bottom of it and shorten the portage by a considerable amount. (Worked great in 2010) 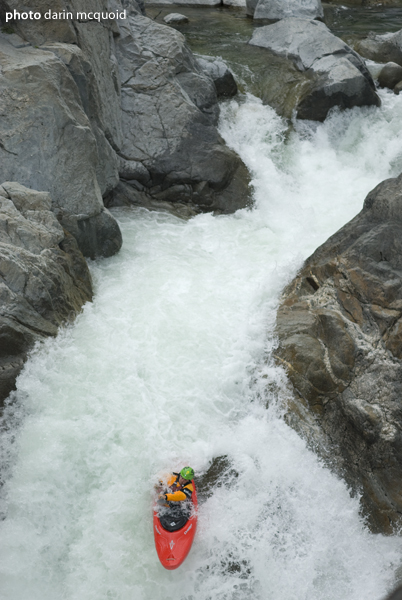 Charlie Center getting left on the twenty five footer. 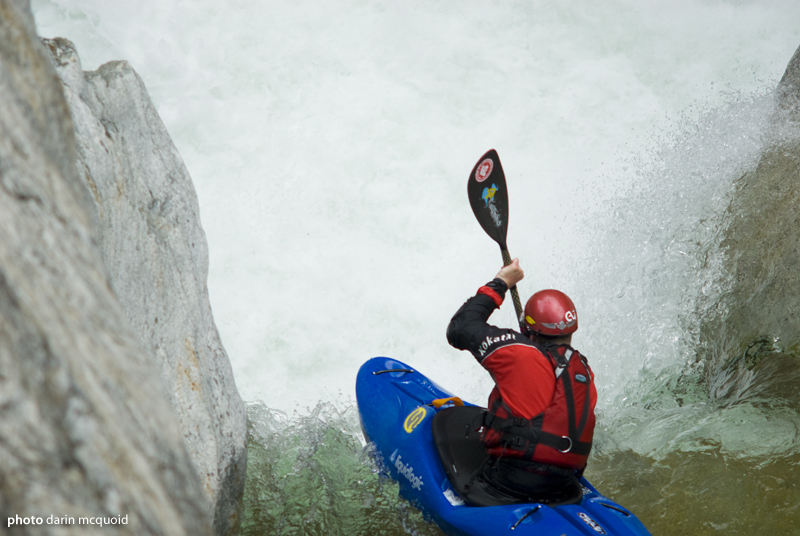 Below the gorge the river opens up, and there are optional portages around a few questionable drops that some run, then a bunch of IV-V boulder garden boogie, a quick portage around two mean holes with undercuts, and one final moderate effort portage. 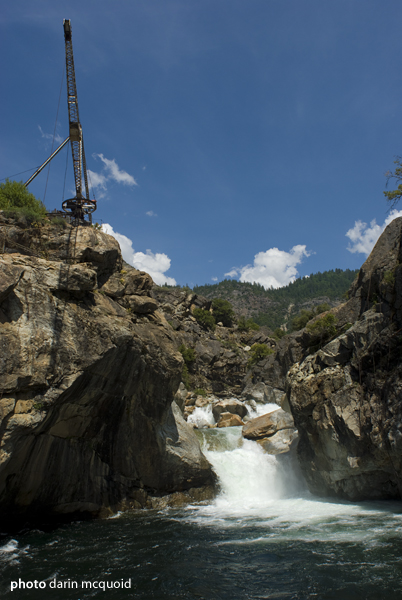 Large caves await a missed line, and we all chose to portage both days, although the rapid has been run. 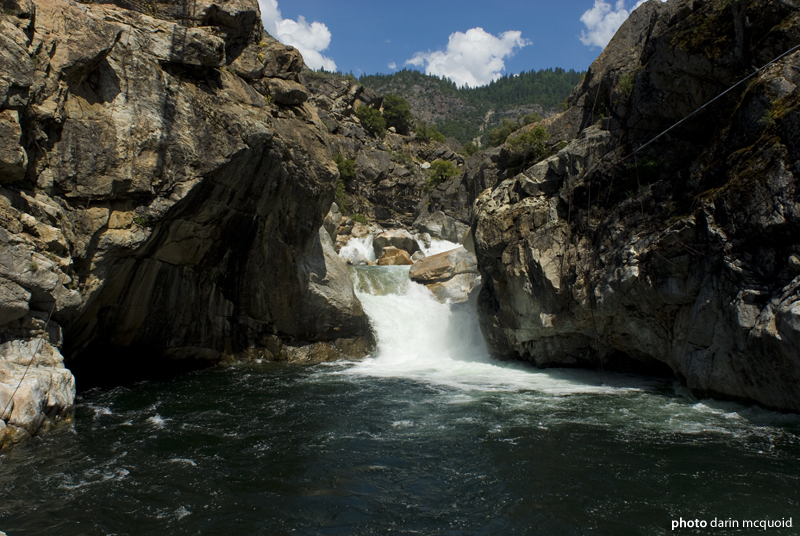 Once past the crane, the river relaxes into a class IV character with the occasional easy V for the next two miles to take out.

With only two mandatory portages, you can go as big as you want in Yuba Gap, although most portage at least five times. Consistent class V for five miles won't leave you wanting at the end of the day. With a prospective future of reliable releases, Yuba Gap is sure to become a modern classic.

Take out at Golden Quartz Picnic Area, and put in at Langs Crossing on Bowman Lake Road. 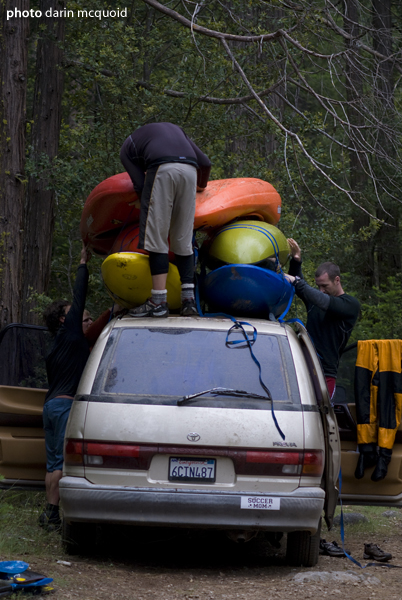