Sunrise at the ever so popular gas station and restaurant outside of Tlapacoyan. 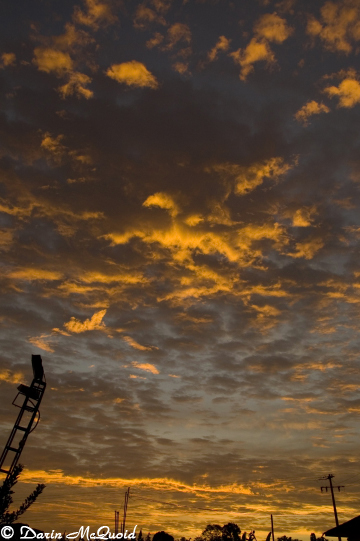 To complete the first descent of the Middle Alseseca only three or four more kilometers of river needed to be completed. We had two more days and high hopes of completing the section on day eight, and doing a first descent on the lower Alseseca to finish off the trip. It sounded pretty simple, the map showed mellow gradient and no gorges for the first kilometer, then a waterfall that was park and hucked in Burning Time, a small gorge and some gradient, then it was all over.
Israel had secured access for Lucas Gilman at the aforementioned waterfall, and we continued upstream to put in below the tiny bridge. It didn’t take us long to reach a small gorge, where we eddied out at different locations down the gorge hoping it would be read and run. Typical to the Alseseca the gorge was blind, inescapable at river level and we couldn’t see around a class II rapid going around the first corner.


The group spread out down the class II lead-in rapids of the gorge. 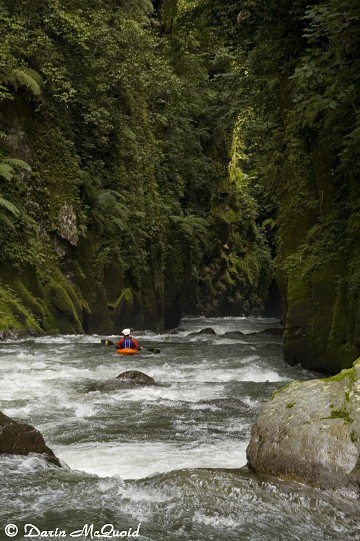 With what we had seen before, most notably the river going underground and straight through a gorge and over a 100+ footer, we deemed it prudent to try and achieve the canyon rim to scout. Lead paddlers attained back upstream while Nick Troutman and Thayer Walker tried finding a way up the right bank, but got cliffed out after a short bushwhack through the jungle. Ben Stookesberry, Eric Jackson, Rafa Ortiz and myself were game for checking out the left side’s access, so we ferried across and left our boats and dry gear by the river.

We started a steep climb that just got steeper and steeper, in some short sections was vertical and involved climbing up the roots of trees that were precariously perched on the cliff. Attaining the top EJ pulled out the high tech watch that recorded our ascent of 250’ from where we started. Kind of funny, we joked about being back at the lip of Big Banana Falls, which is what our elevation basically was again. Rafa cut through some amazingly thick underbrush in the torrid heat, and thankfully the underbrush relented after a few minutes when we found a trail that led to a banana plantation. Say all you want about deforestation, sometimes in the jungle it’s a welcome relief! Twenty to thirty minutes of scouting the gorge revealed it to be the most heinously boxed in class II-III gorge I had ever seen. We laughed about such a large scout for mellow rapids and made quick time back to the boats, thoroughly enjoying the cool water and beauty of the gorge.

Immediately after exiting the gorge we eddied out to scout the waterfall notorious for a swim in Burning Time. 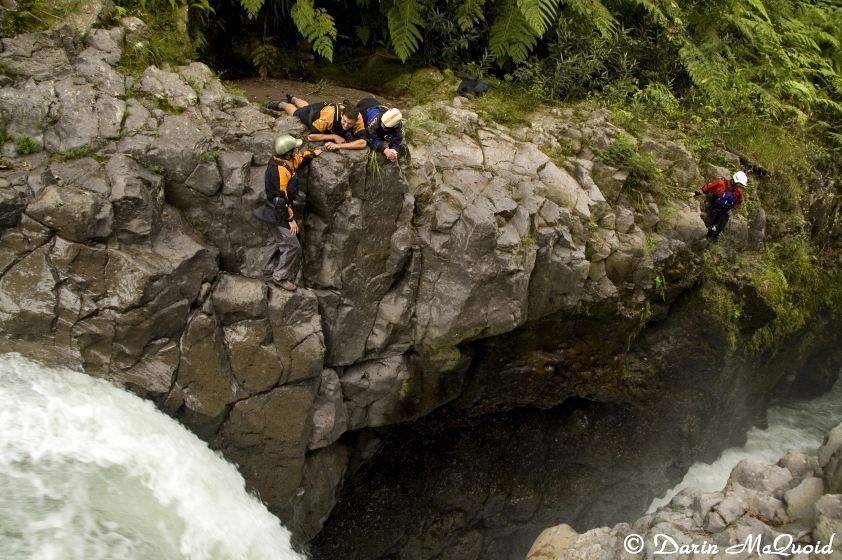 It was already late afternoon at this point, and motivation was starting to fade with the light. Several logs were tossed in, all went in the undercut and flushed out after twenty seconds or more downtime, not too friendly at all. We all felt that it was run-able, but no one really felt like running it. Ben Stookesberry eventually stepped to the plate and seal launched in right above the drop. He seal launched in with a strong 45-60 degree angle, hoping to keep it in a drive across the lip to avoid the big undercut on the left. Upon entering the water his bow was instantly blown downstream and he commenced with several sweep strokes all the way to the bottom of the waterfall, getting enough right angle to resurface to the right of the boil.


Ben Stookesberry, sweep stroking it all the way until impact. 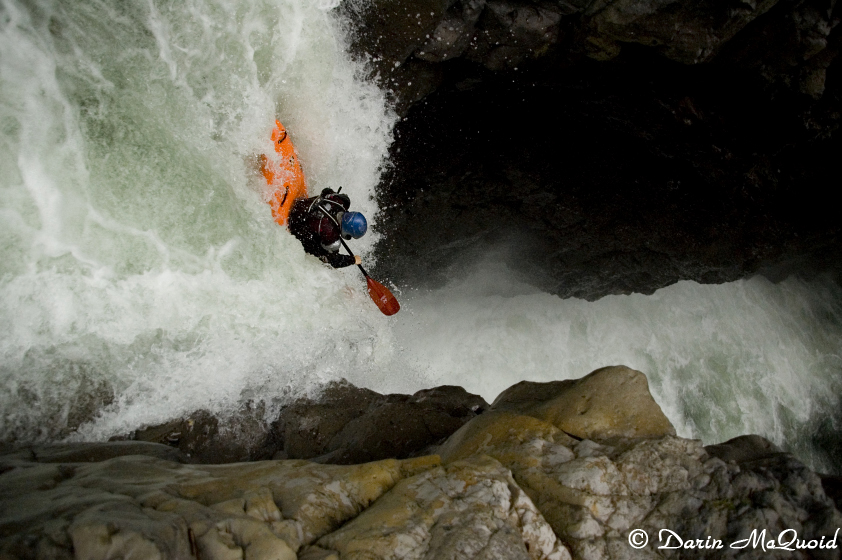 The rest of us were telling ourselves that motivation for this risky drop would come with better lighting in the morning, and we headed up through private land that the owners were kind enough to let us pass through.

Time was running short now, with two full days left for the group in Mexico, but we knew one would be sacrificed on our return drive to Mexico City. That left us one full day and two kilometers of river to complete for a full first descent, and the section from below the waterfall to the “Pesma Run” was unrun to the best of our knowledge. We hiked out in the dusk hoping for better luck with tommorow's gorges. 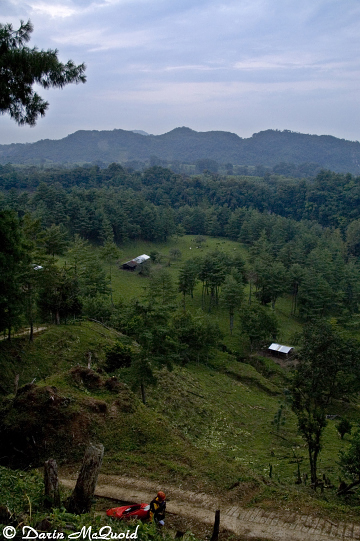