Middle Kings V-V+
The Middle Fork of the Kings River from Le Conte Canyon to Yucca Point is considered the pinnacle of expedition kayaking in the United States. Everything about the run is epic. It has an eight hour one way shuttle, fourteen mile hike over 12,000’ Bishop Pass and forty miles of world class whitewater dropping 7,000 vertical feet. Amazingly, the exception to the rule is the portaging, which never gets epic.

The Middle Kings is generally done with one day of hiking and five on the river, although it has been done in as little as eighteen hours and taken over a week. Ben and I pulled off our Fish Creek into the San Joaquin descent late in the afternoon, met up with Chris and camped outside of Bass Lake, knowing only that we wanted to do the Middle Kings to finish off our epic spring.

In the morning we headed south to Fresno, busy making phone calls to see who was going where and when. After just a few calls our group sized soared, from two or three to seven. We would be joined by Colorado legends Gary Edgeworth, Eric Seymour and Forest Noble, as well as southwest paddlers Tim Kelton and Rolf Kelly. It didn’t take too long to figure out the shuttle, and only too soon we were embarking on the eight hour shuttle. Having already shuttled through Yosemite twice in the last month, we took the slightly longer but straighter route through beautiful Bakersfield.


We drove straight to South Lake trailhead and crashed out at one in the morning, waking up to scenic views that were just a taste of what was to come. 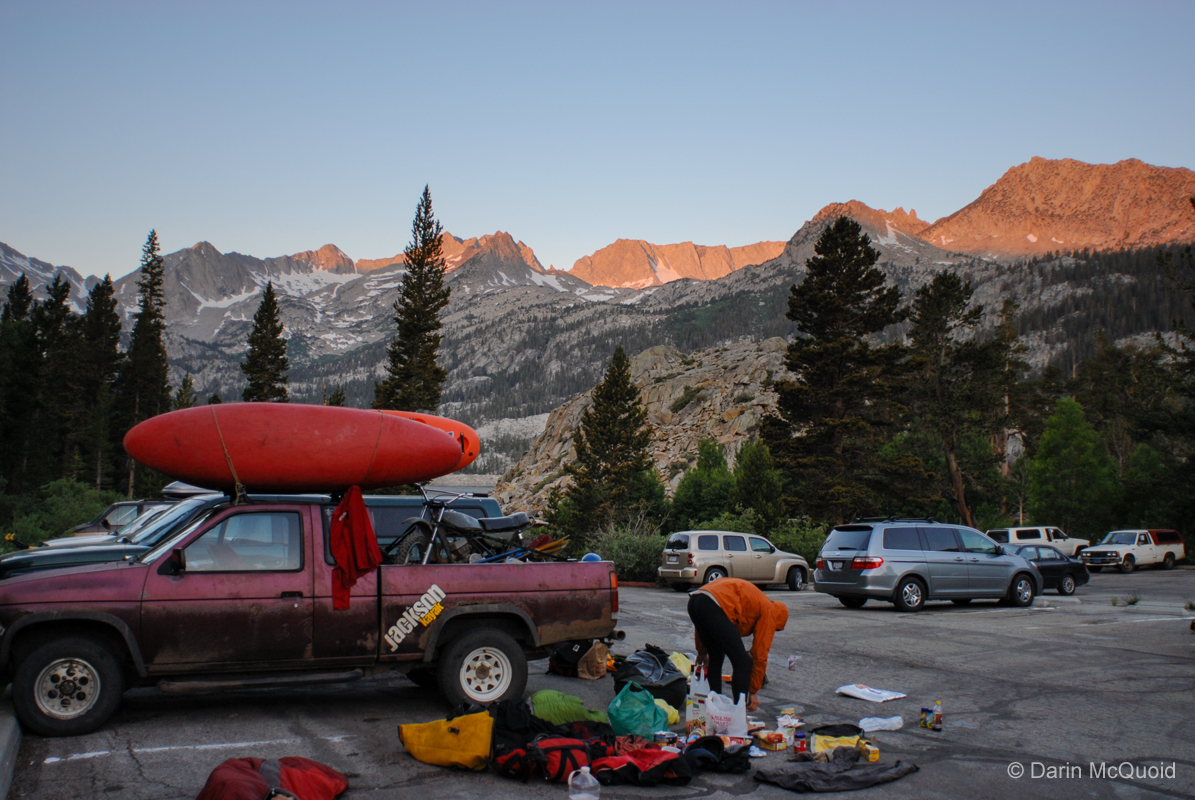 The group consensus was to plan for four nights, but pack for five. Minutes into the hike I was nauseous and throwing up. Several days before on the Middle Fork San Joaquin I had the same problem, either from food poisoning or bad water, and it was striking again in the worst of places. Chris had opted out due to his back pains, so I knew there wasn’t a car to hike back to, and it was just time to keep pushing. 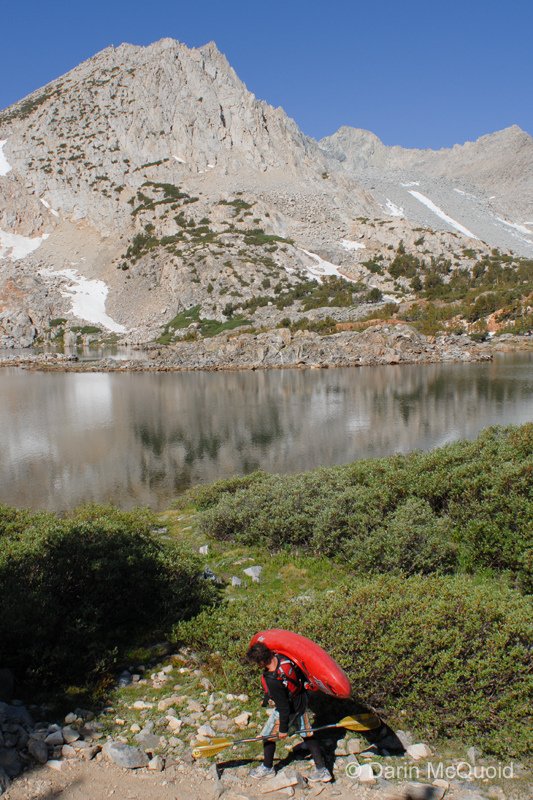 The trail gets steeper as the pass approaches. 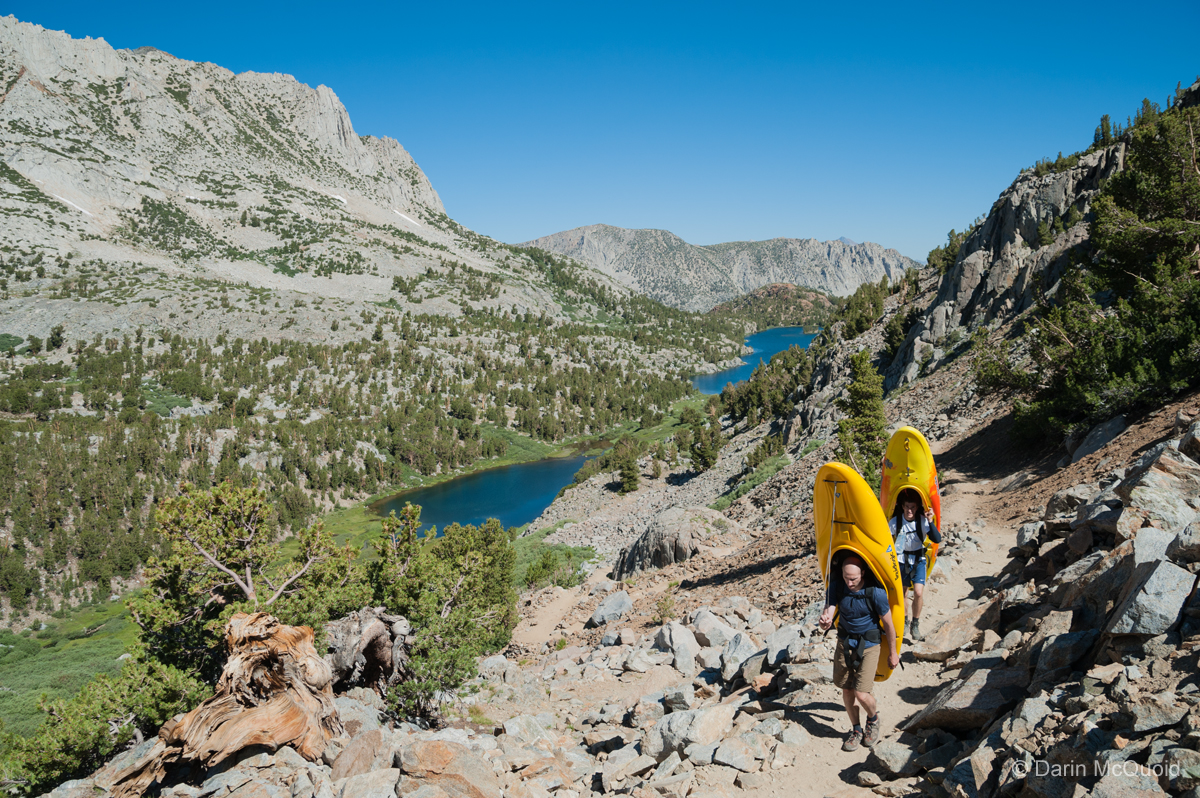 If the hike is a little to mellow for you, just give it a try in October! Rush Sturges having a great time. 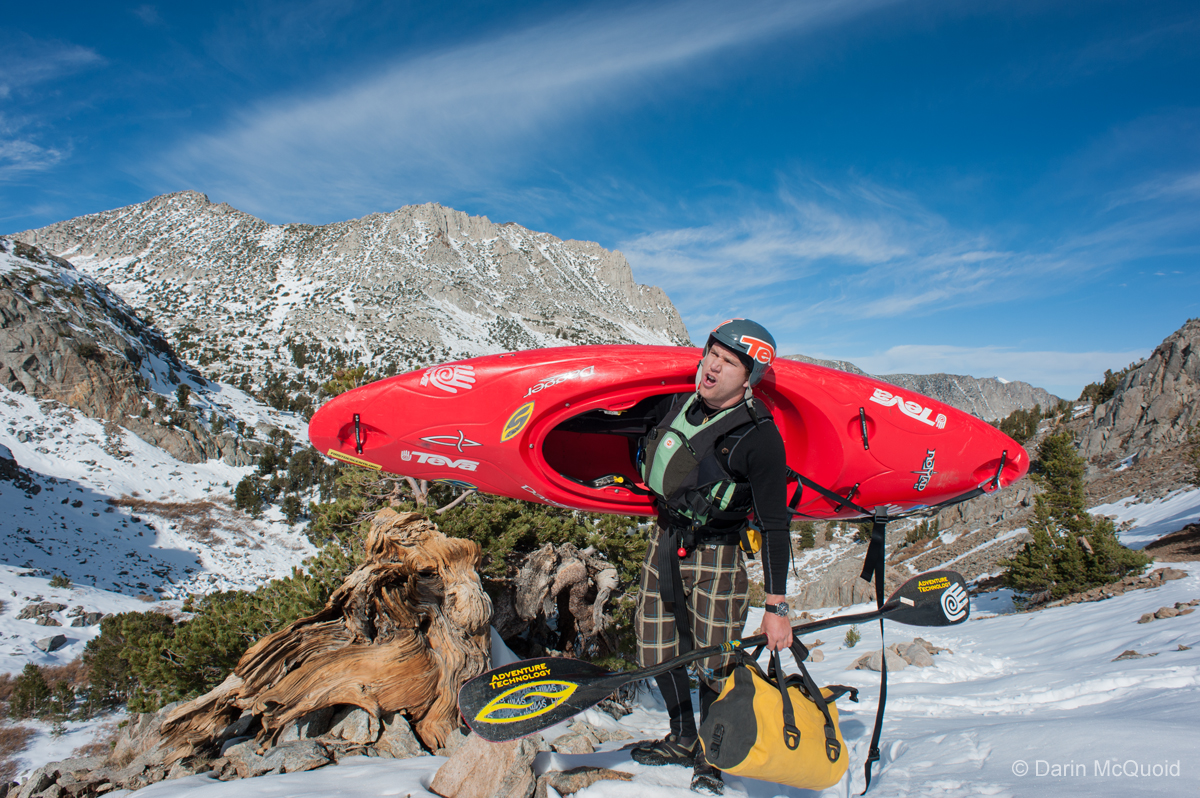 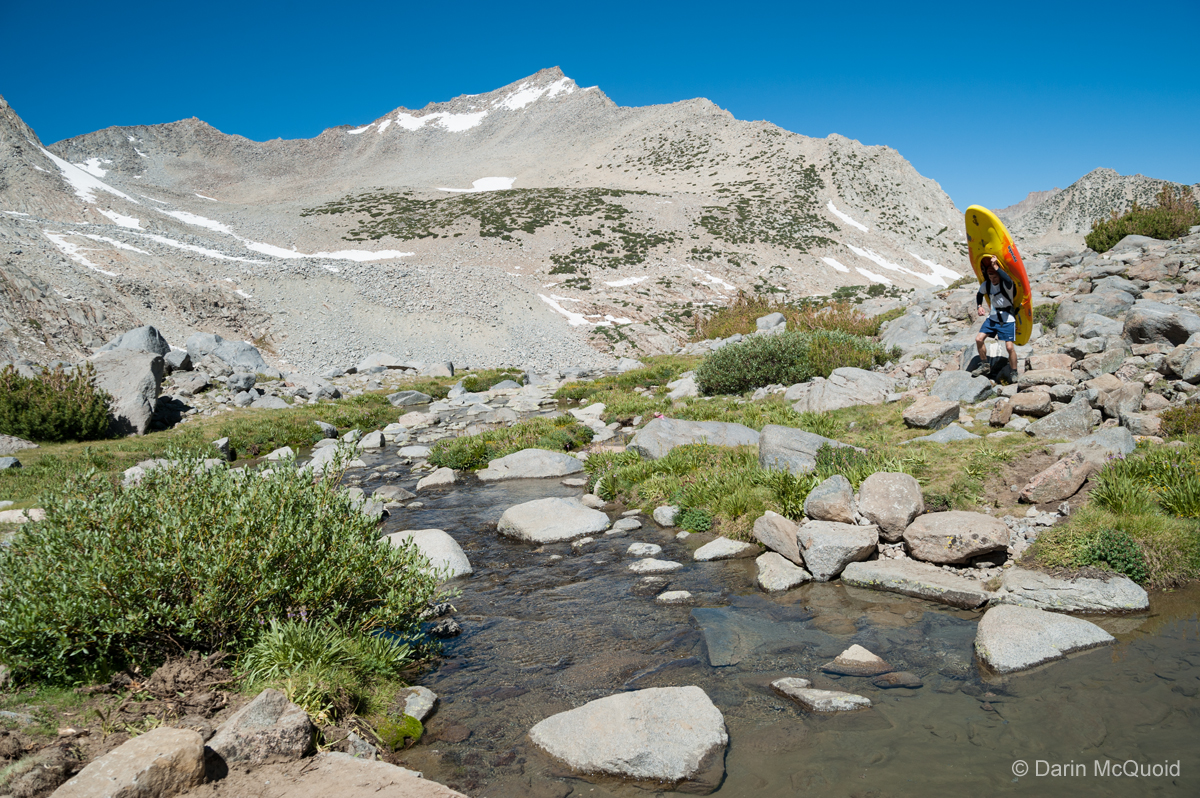 Now for the steep part. 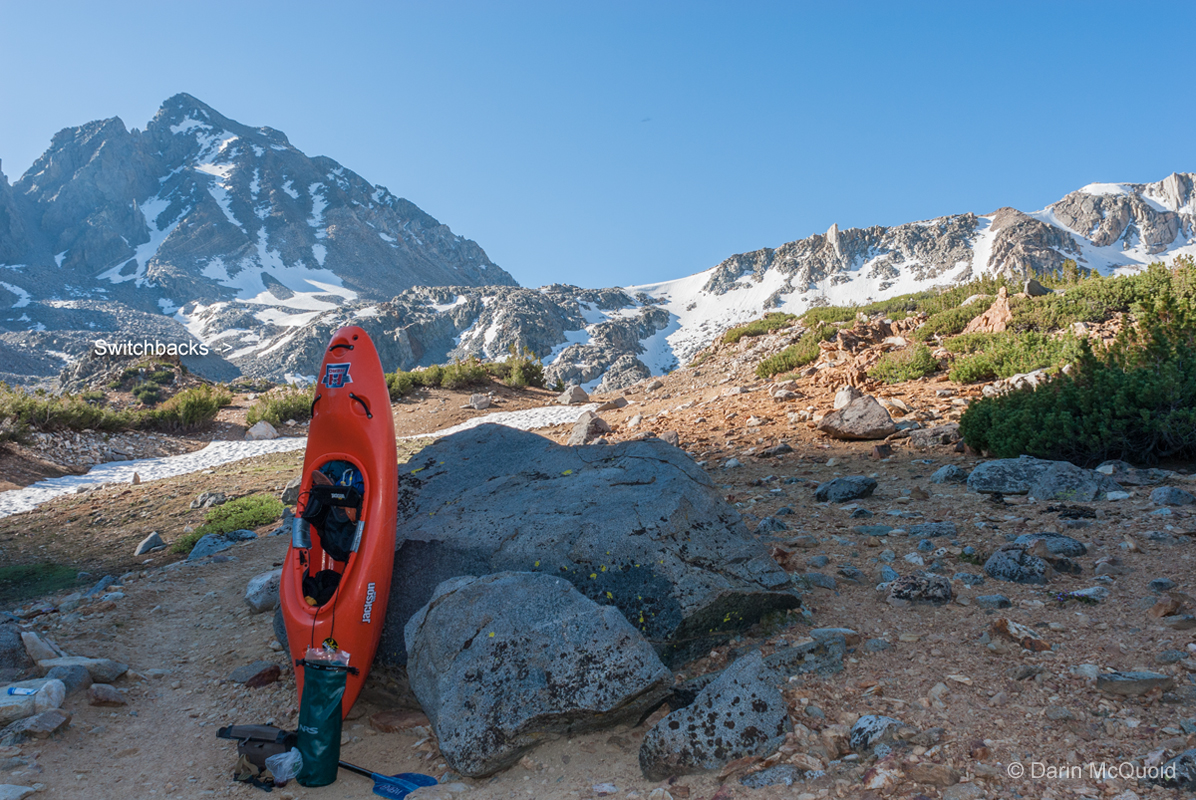 The initial climb has moderate gradient, but the final climb to Bishop Pass is steep, and I was amazed at how out of breath I was until I saw the sign that reminded me of the elevation. We took a nice long break at the pass, enjoying Emergen-C slushies while waiting for the rest of our crew. 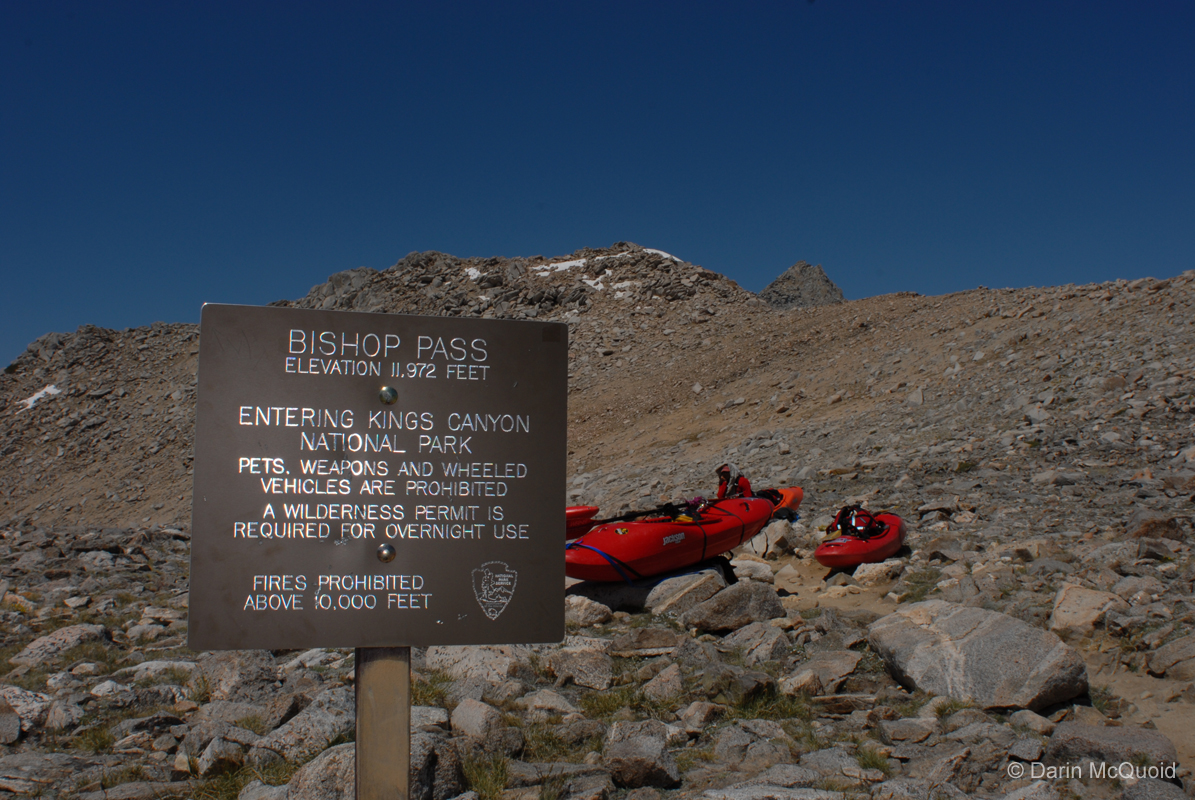 Next was the mellow push through Dusy Basin to the brink, where the trail drops nearly two thousand feet into Le Conte Canyon. Fast moving clouds helped the gorgeous scenery stand out even more. 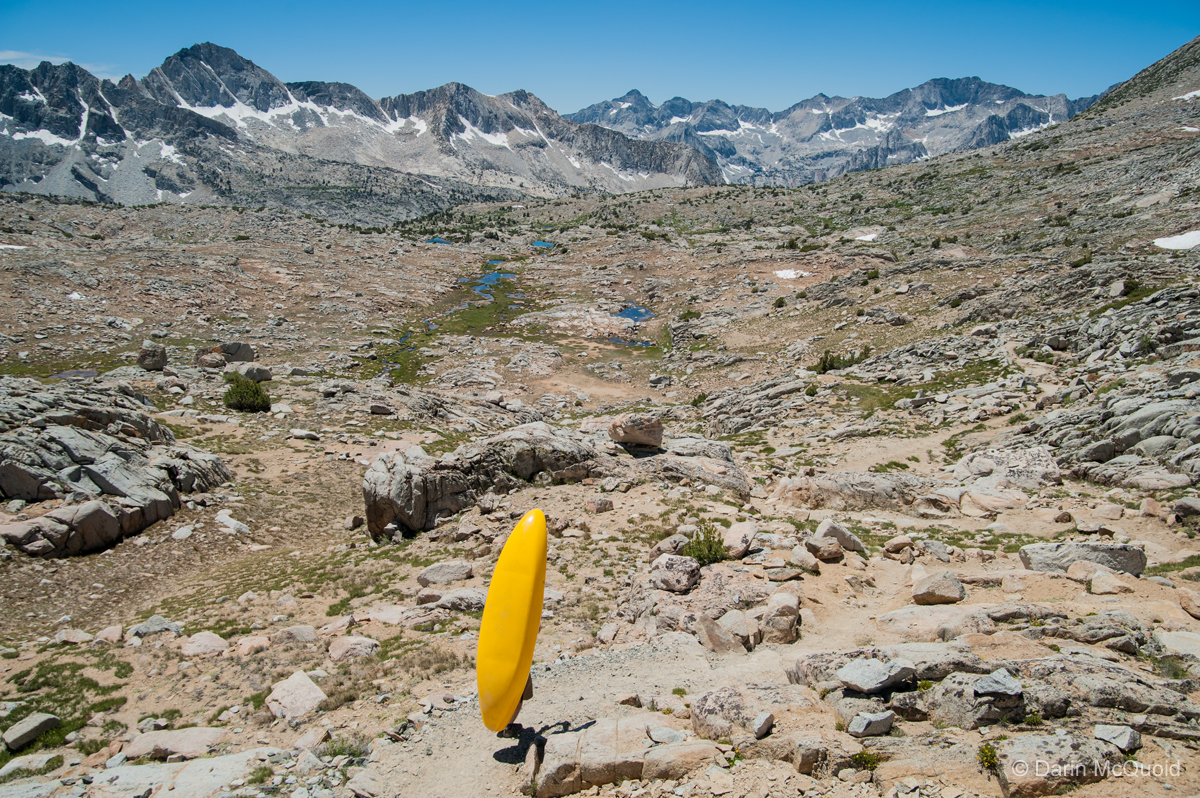 Camping at the brink is a popular choice, because the final down climb is a true “knee buster”. We took a break and discussed our options, deciding to push all the way to the river. Although it makes for a long day, we figured it was better than hiking all day, going to bed only to wake up to more hiking in the morning. Plus it helped us stay on schedule if we wanted to get through the run in four days. 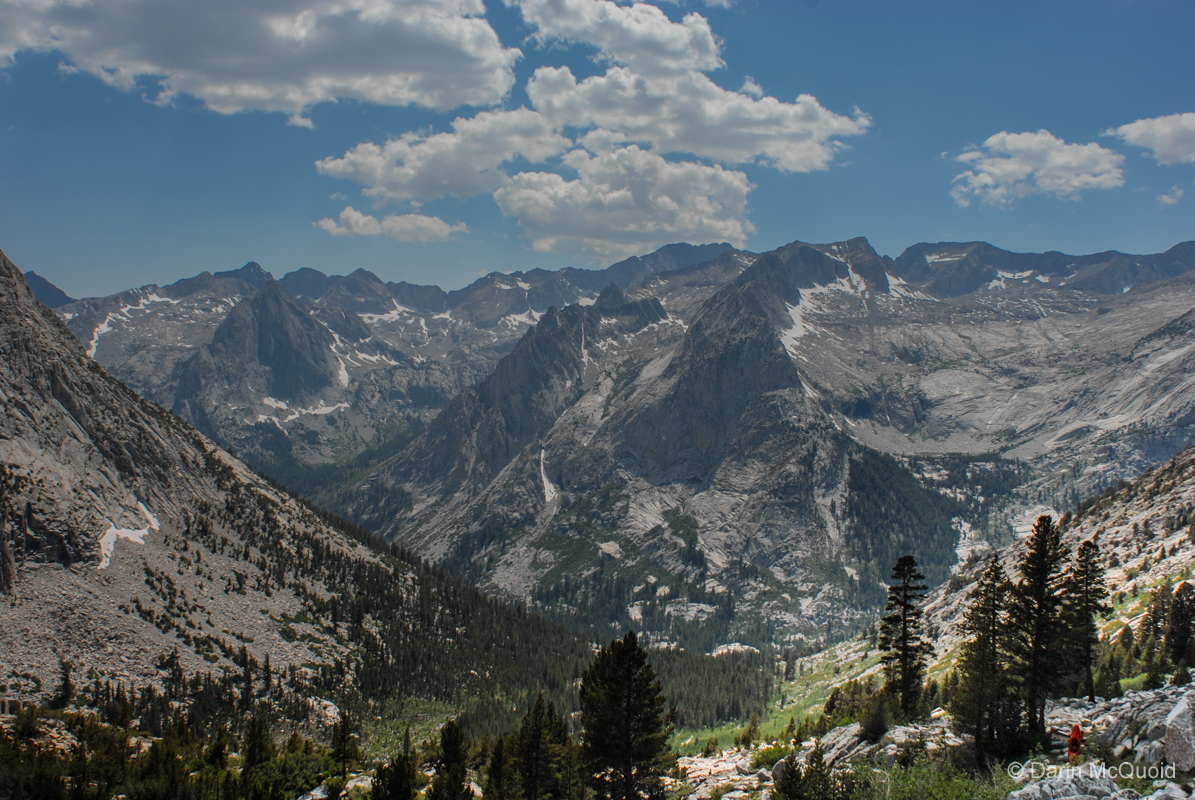 Halfway through the down climb we took a major break. It’s amazing how hiking downhill with a loaded boat is more exhausting than climbing, and we were all relieved to finally see water.


The crew finally gets a glimpse of the Middle Kings. 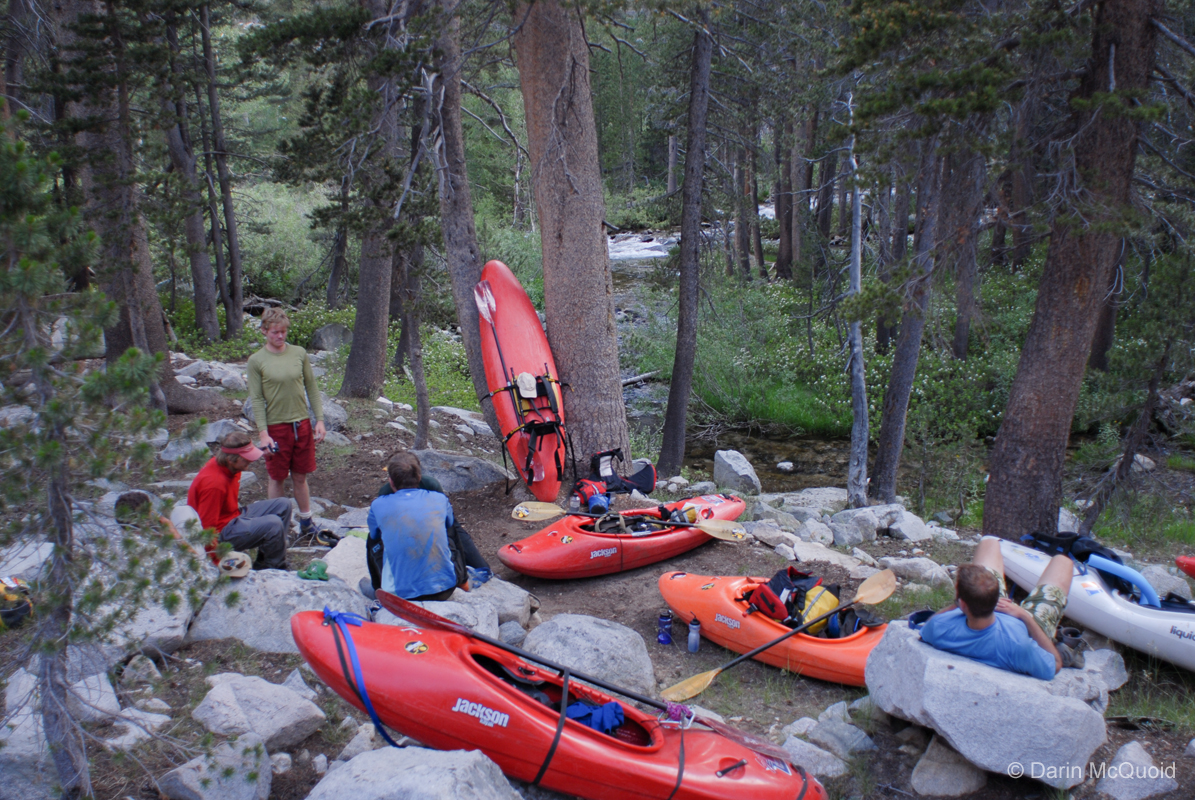 There was mediocre camping where the trail met the river, but Ben recommended pushing on to escape the thick mosquitoes. A relatively unknown fact about the Middle Kings is that for the first few miles, it’s actually pretty manky. The river was initially very mellow but with a few log jam portages, and one of the most beautiful meadows I have ever seen. Unfortunately the light had already faded, so no pictures were taken. As it turned to dark we knew we wouldn’t get to Palisade Creek, so we camped out right above the first real gradient. At the end of our first day, we were awestruck by the epic scenery, looking forward to all the rewards but perhaps most of all simply glad to have the hike behind us. There is very nice camping near the end of the meadow, and it's not nearly as mosquito infested as you'd imagine.


Morning views of deer from the meadow camp. 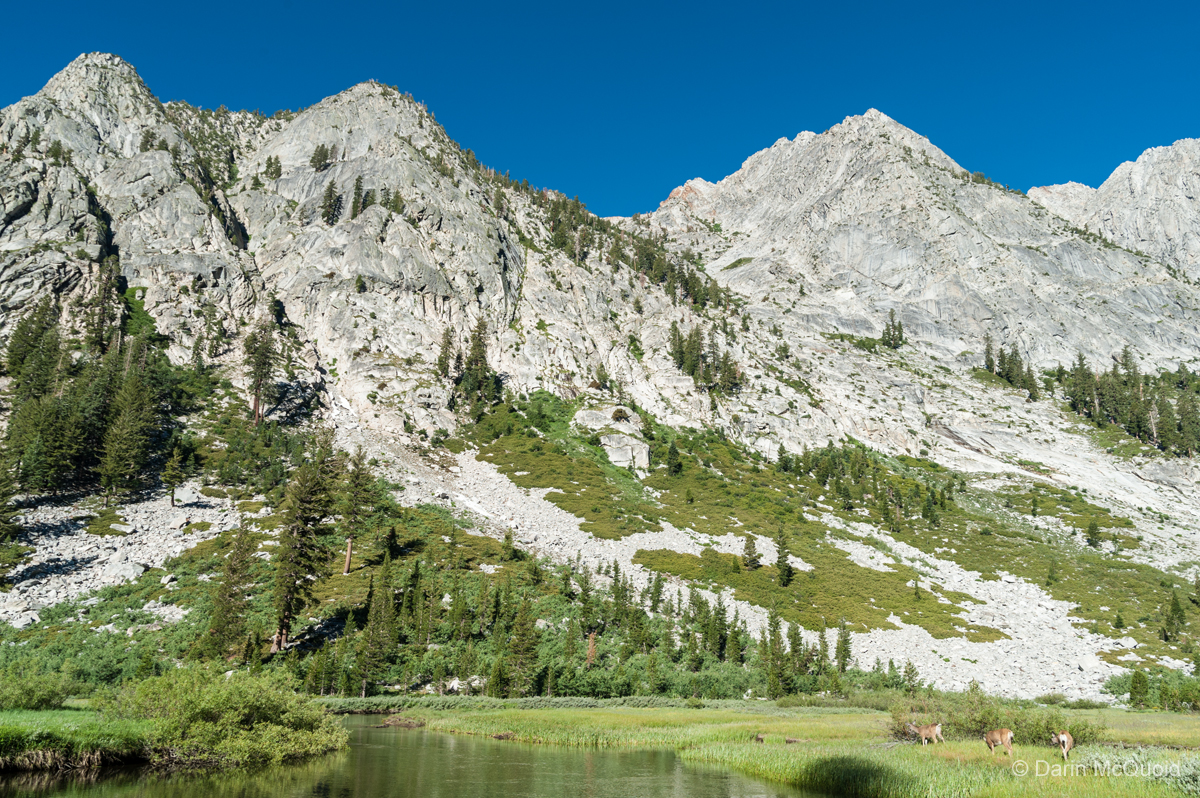 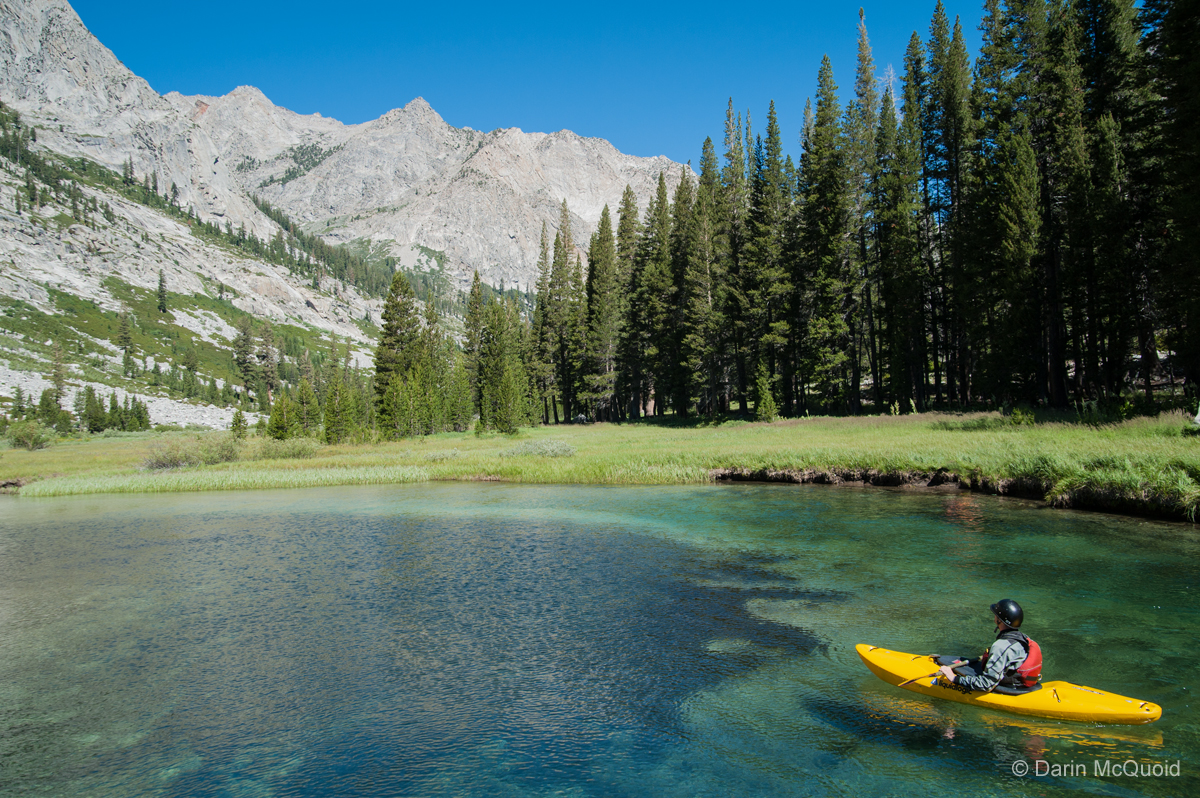